In the Kitchen: Spaghetti Bolognes alla Checca/ My Visit to Bologna, Italy

I asked my son what he wanted for dinner. "Spaghetti Bolognese...with cilantro" was his reply. "With cilantro," that was something different, I thought. So, I came up with this idea - I would take two of my pasta sauce recipes and use them both, with some modification. From the title of this entry, I'm sure you got the hint.

As I started my meal preparation, I thought of my visit to Bologna several years ago, with a dear friend. It was just a train ride away from Milan. That visit turned out to be quite interesting, as it gave me more insights into the historical importance of this place.

Bologna is the capital city of Emilia-Romagna, in the Po Valley of Northern Italy. One of its claims to fame is it is the home of the oldest university in the western world, the University of Bologna which dates back to 1088. In the 19th century, Bologna was once again under the sovereignty of the Papal States.

Bologna is one of the most developed cities in Italy, ranking as one of the top cities in terms of quality of life in Italy, due largely to its strong industrial tradition, its highly-developed social services, and its prominent location at the crossing-point of the most important highways and railways in the country. Bologna is a lively and cosmopolitan Italian college city, with a rich history, art, cuisine, music and culture. It was named "2000's European Capital of Culture." 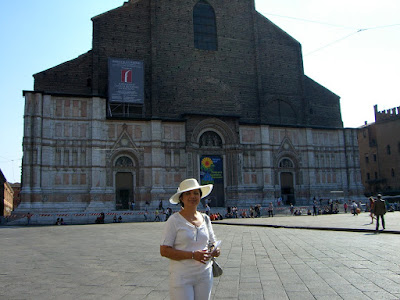 Piazza Magiore is the main square. Here is a partial view of the Basilica di San Petronio, the facade of which remains unfinished. 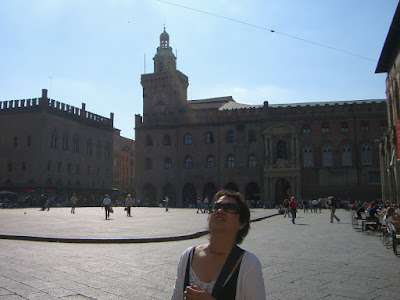 On another side of the piazza is Palazzo d'Accursio. 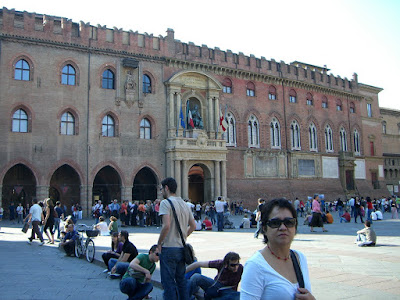 Another view of Palazzo d'Accursio 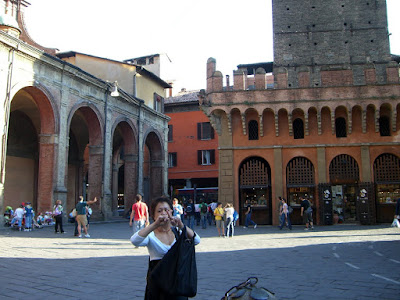 My friend is showing me how these two iconic towers were constructed... 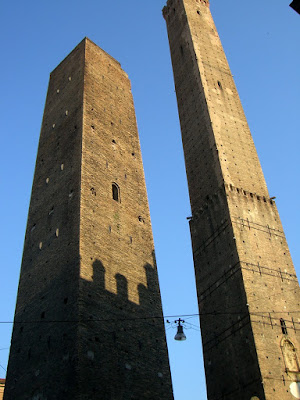 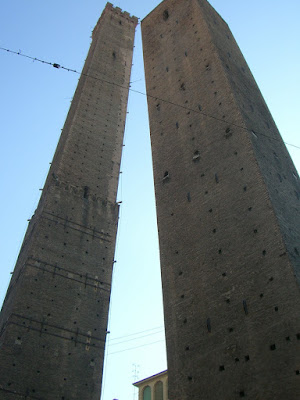 slanted and almost meeting at the tips, from one angle! 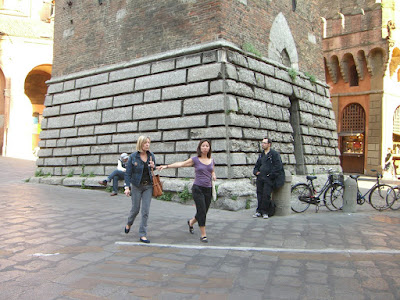 You can see that the problems started at the base...looks like over compensation for the unleveled ground. 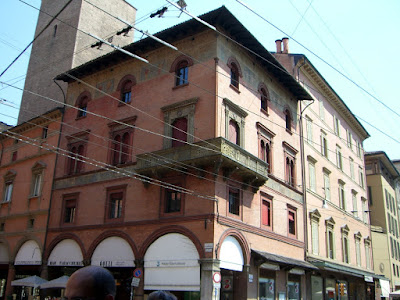 There were many churches, almost one in every corner. 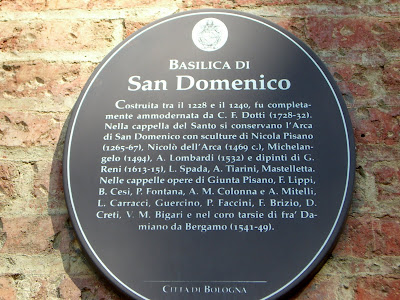 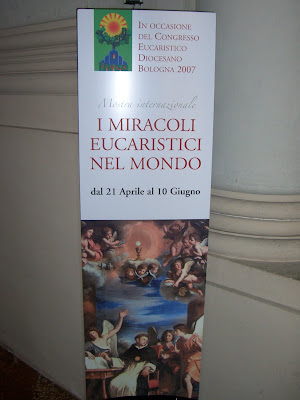 The main church we visited was this, for a special exhibition on "Eucharistic Miracles" that have taken place in... 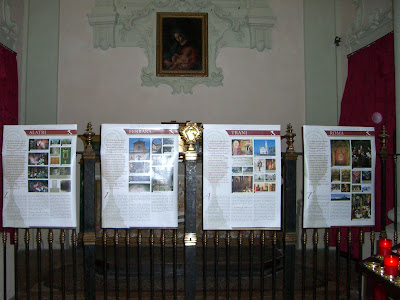 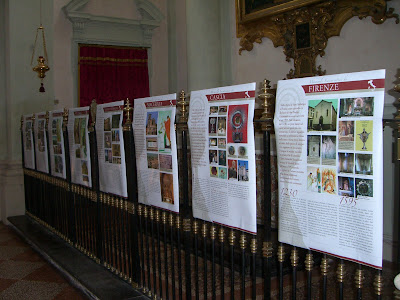 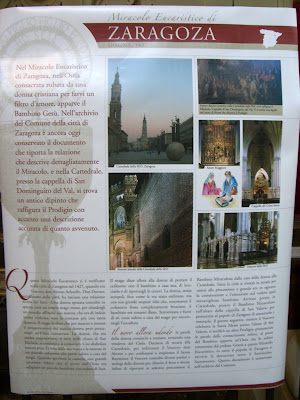 different parts of the world. The posters were hang on the metal grills in front of the side chapels, on both sides of the church.


I was very interested in this after having read the book authored by Bob and Penny Lord "Eucharistic Miracles" detailing and documenting some of the Eucharistic miracles that have happened, when the bread turned into flesh or blood - transubstantiation. 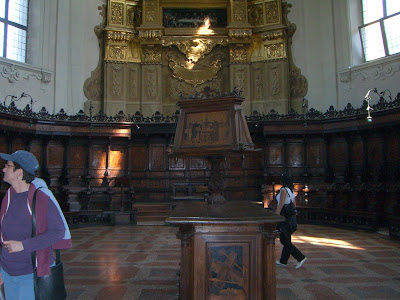 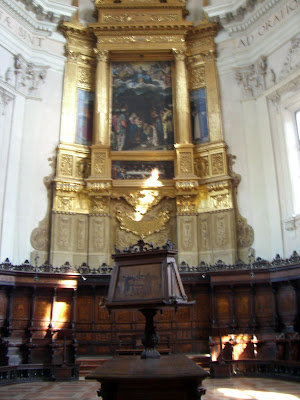 This part of the church, the wood panels, reminded me of the interior altar section at the Notre Dame de Paris, was for use by the priests for their vespers. 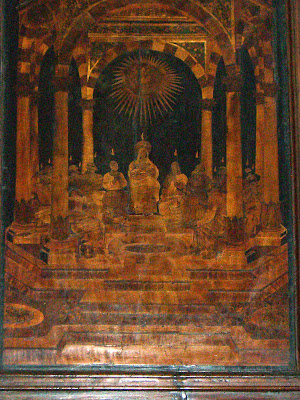 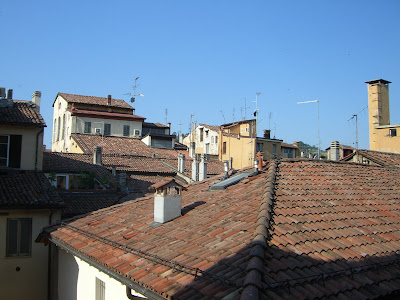 The following morning, we looked out from our hotel window. It was almost lunchtime and we decided to have the famous Spaghetti Bolognes from where it originated, before heading back to Milan. 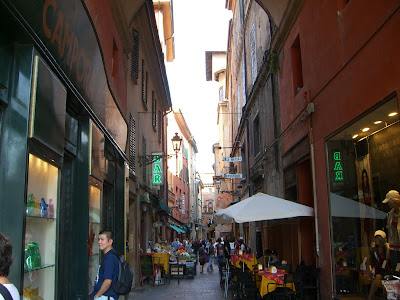 We found a restaurant serving Spaghetti Bolognese in this area. I ordered it. When It came, I was surprised that it had very little ground meat but more of a tomato sauce that flavored the pasta, and I had to asked for formaggio - Parmigiano Reggiano!

INGREDIENTS for my recipe , as requested by my son -
Alla Checca Pasta Sauce
1. 1 small clove of garlic, chopped or pressed
2. I small onion, coarsely chopped
3. 2 seeded tomatoes, diced
4. Coarsely chopped cilantro (instead of Basil)
5. 1 Tbsp. Extra Virgin Olive Oil
6. Salt and pepper to taste
Combine all ingredients and set aside.


Arrivederci, Bologna!
Posted by yolanda at 08:24