The story of the miraculous medal dates back to 1830. One night, while Catherine Labouré was fast asleep in the motherhouse of the Daughters of Charity on rue du Bac, her guardian angel woke her up and invited her to go to the chapel as the Blessed Virgin was asking for her. She was led through the sanctuary. 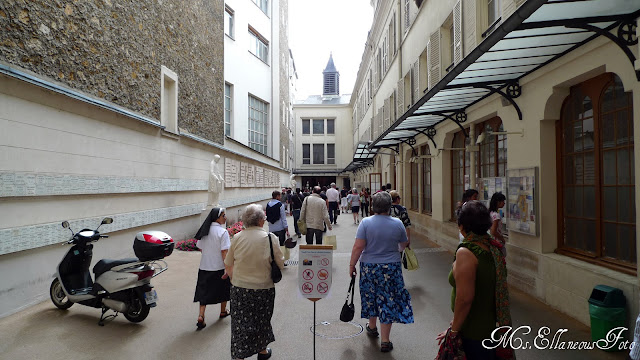 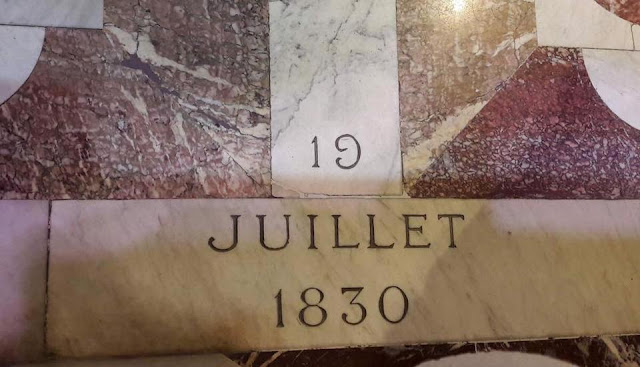 This is the date that Our Lady first came to a chapel in a convent, on rue de Bac in Paris, on the eve of the feast of St. Vincent de Paul. This marker is found behind the main altar. 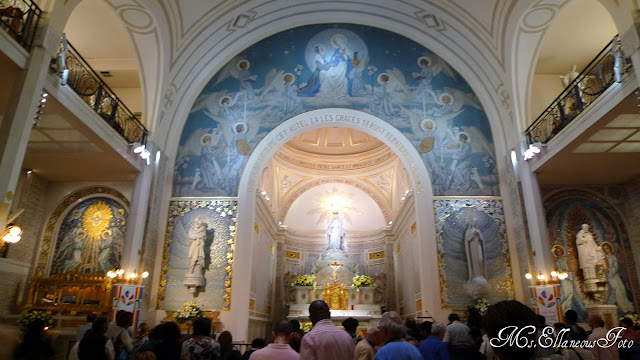 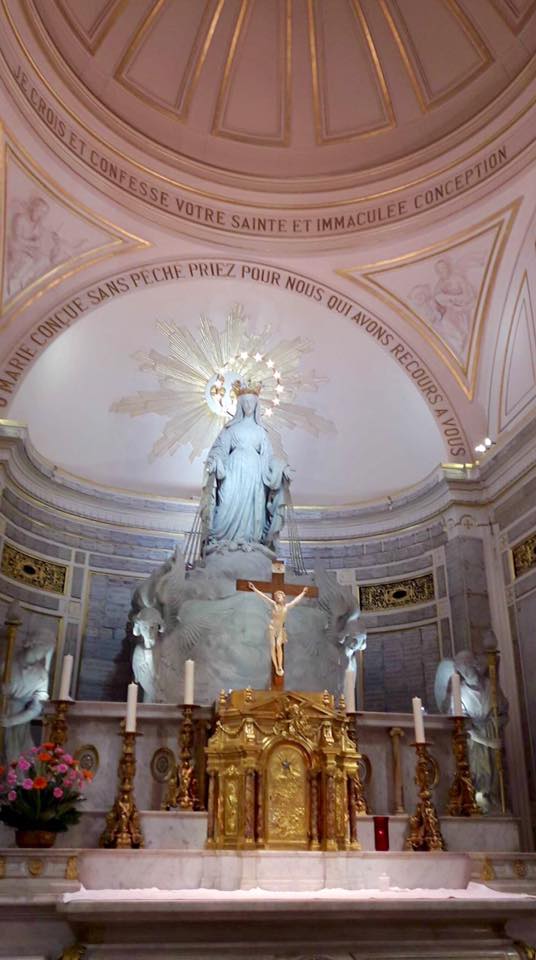 Main altar at the chapel
Our Lady came, dressed in an off- white dress with a blue mantle and a white veil covering her head, draping down her shoulders. She sat down next to Catherine and began to speak to her. 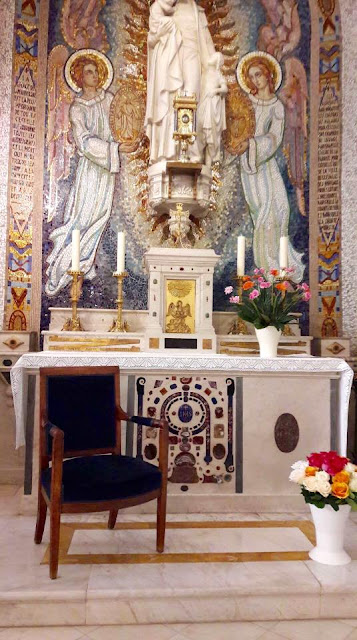 This is the side altar in honor of St. Vincent de Paul, to the right of the main altar. To the left of this side chapel is the glass coffin of St. Catherine Labouré. 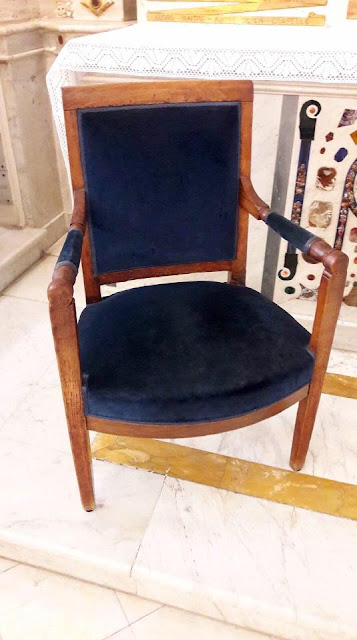 The chair which Our lady had sat on

Our Lady presented Catherine several images of what was to happen in France, a prediction of things to come - sad times, bad times - the affliction and tribulations that were to befall France in the near future and 40 years after. The Blessed Lady made an invitation for all to come to the foot of the cross to ask for graces.

Catherine was told about a mission that was going to be entrusted to her, along with the warning that there would be trials that she would endure, but not to be afraid and to have faith and confidence in the Lord. From July to December, she was privileged to have three occasions to converse with our Lady.

Once, while at prayer, she had a vision of the heart of St. Vincent the Paul for 3 days, in different colors. The colors were symbolic: white - for peace, red - the color of fire, black - the color for misfortune that was going to befall France.

On Trinity Sunday, Catherine had a vision of Christ as the crucified King. Catherine claimed, too, that she saw the Lord in the Holy Eucharist at all times, except when she had doubts.

On November 27, 1830, our Lady appeared to Catherine again while the sisters were at prayer time in the chapel, at 5:30, on a Saturday before the first Sunday of  Advent. It was, then, that her mission was spelled out to her: to make and distribute the medals of the Immaculate Conception - the Miraculous Medal. 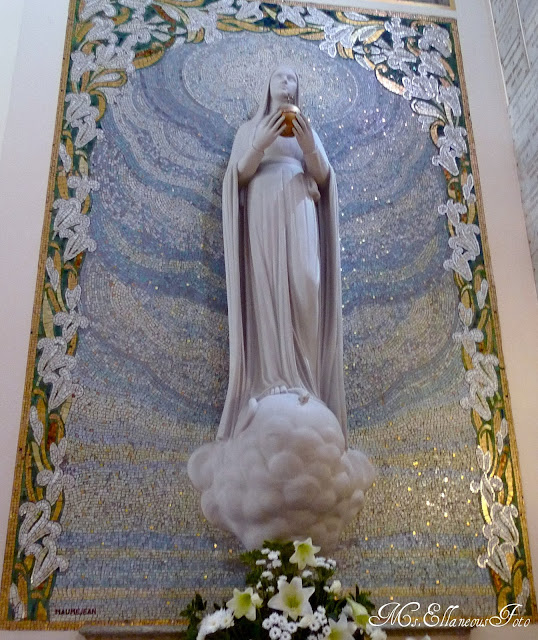 In another vision that Catherine had, Our Lady was standing on a globe with one foot stepping on the head of a serpent, garbed in a white dress, with a veil flowing down, and holding a golden ball she was offering to God, as her eyes looked up to heaven. Her fingers were with bejeweled rings, sparkling with rays of light on the globe, beneath her. Without speaking a word, Catherine understood that the golden ball represented the world, especially, France and each person;... 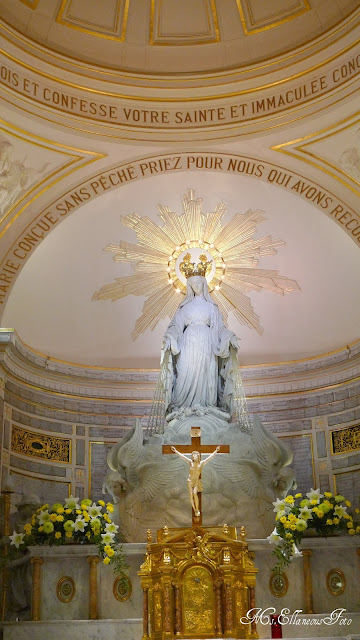 Soon, an oval frame formed around her, and letters in gold were formed with the words of the invocation "O Mary conceived without sin, pray for us who have recourse to thee. " This became the front side of the medal design. 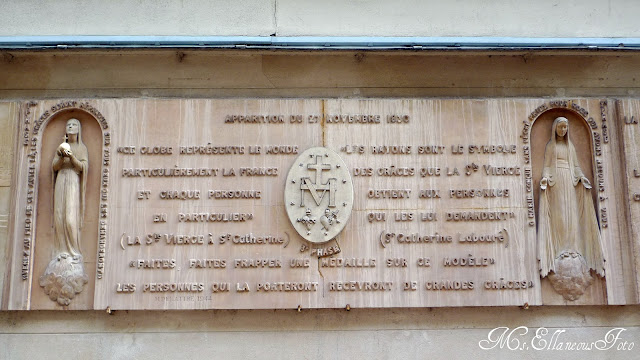 Then, the vision revolved to show the back side of the medal: a cross with a bar at its feet, with the letter "M" intertwined, and beneath the letter were the hearts of Jesus ad Mary. Catherine heard the voice instructing her to have the medals struck. There is a promise that  whoever wears it around his neck, confidently, would receive divine graces. From the symbolism of the different elements in the medal's design, we can see the whole history of salvation, from Genesis to the Apocalypse.

Catherine endured so much hardship to get these medals made. She kept everything to herself for the most part, and was only talking about it with her spiritual director, Fr. John Marie Aladel, for 2 years. He asked her to write her account of her visions three times. By the grace of God, when Fr. Aladel  presented it to Archbishop Hyacinth de Quinlen of Paris - who had questioned him in detail about Catherine's vision and her mission - he approved the medals to be struck and distributed.

A canonical inquiry was began in 1836. At the conclusion of the inquiry, it was pronounced that the Miraculous Medal was of supernatural origin. 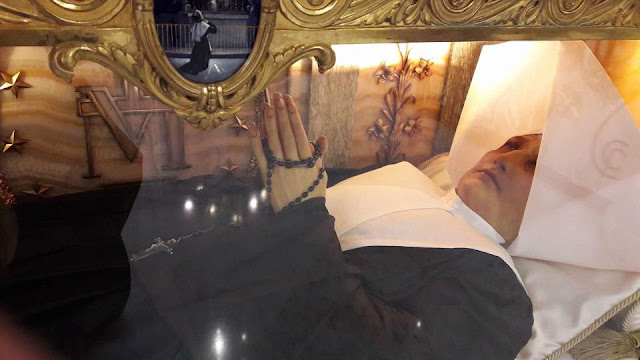 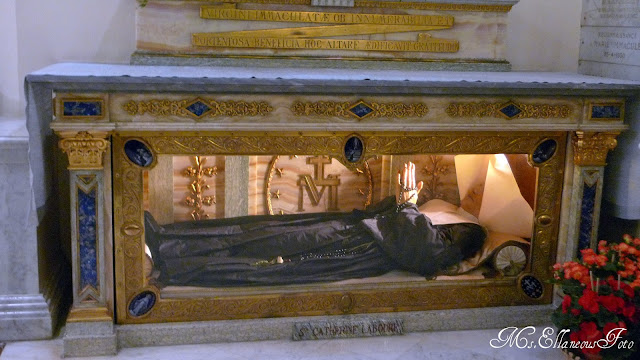 Catherine died 40 years after, on December 31, 1876. She was beatified in 1933. When her body was exhumed, they found it to be incorrupt. On July 27, 1947, Catherine was canonized a saint. St. Catherine lies in state to the right of the main altar, on the floor level. By the time of her death, more than  a billion medals had been struck and distributed. 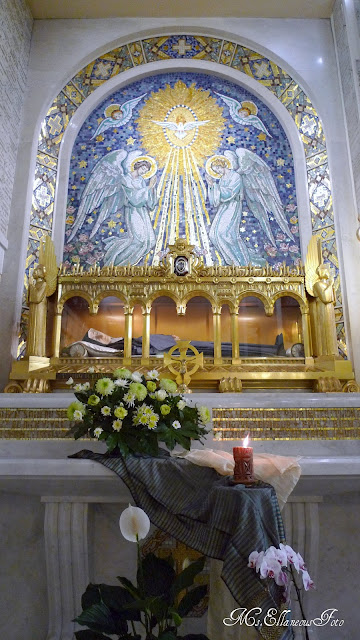 The side chapel to the left of the main altar, in honor of St. Louise de Marilac

In 1619, St. Louise de Marilac - the founder of the Daughters of Charity - met Francis de Sales who gave her spiritual support. Her husband fell ill in 1623, and soon after, she took spiritual direction from St. Vincent de Paul . After the death of her husband, she actively joined other aristocratic women in St. Vincent's ministry - caring for the poor and neglected children. She proved to be a very astute worker and was sent on missions all over France, to establish her communities in orphanages and hospitals, and other institutions. She was asked by Vincent to visit and meet with the leaders of the  the Confraternities of Charity to encourage them to work in teamwork with the local parish priests. 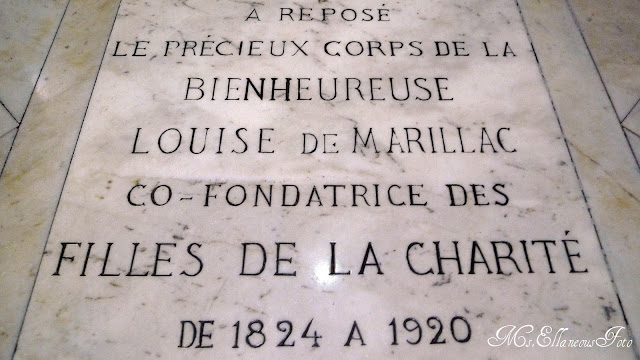 With four other young women to do the work with her,  she co-founded, along with St. Vincent de Paul's guidance,  the Daughters of Charity in 1633. At the time of her death, her congregation had over 40 houses in France and in Warsaw, Poland. 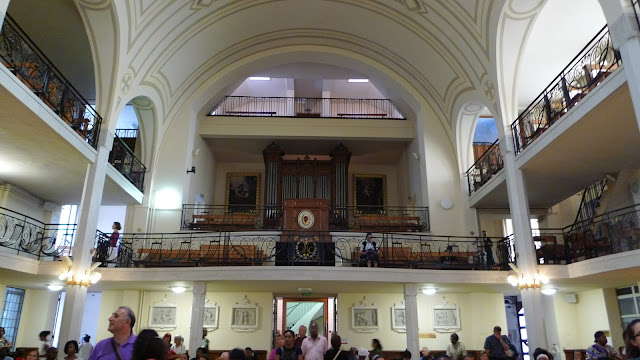 A view of the organ loft on the back of the church, above the entrance doors and the different levels used for added seating capacity. Daily, pilgrims are constantly streaming in and out to sit before our Lady, the Lord at the tabernacle, and the saints, to meditate, pray, attend mass, and give thanks for miracles.


The Chapel of the Miraculous Medal is one of the most visited Marian sites by pilgrims from all over the world. Located in the heart of Paris, it is very accessible by foot, by metro, by bus, or cab.