While in Bicol, we wanted to experience something extraordinary: to swim with the Butanding whales. Well, not really for all the members of our group, where only three out of ten bravely decided to do it while the rest would just watch and take pictures. And so we booked with an agent to go to Donsol in Sorsogon.

Donsol was settled by refugees who were running away from Mayon Volcano's fiery temperament  in the late 18th century. How its name came to be has two versions. There is an indigenous plant that grew abundantly, which happened to be medicinal, called "donsol' or "dosol." Another version is, its name was derived from a blacksmith's skill who uses an iron stand upon which he pounds, and in the process creates tools and weapons from the red-hot iron. In the local vernacular, the iron head is called "dosolan."

The success of this rural town is in how it has become the "benchmark for ecotourism ventures in the country." 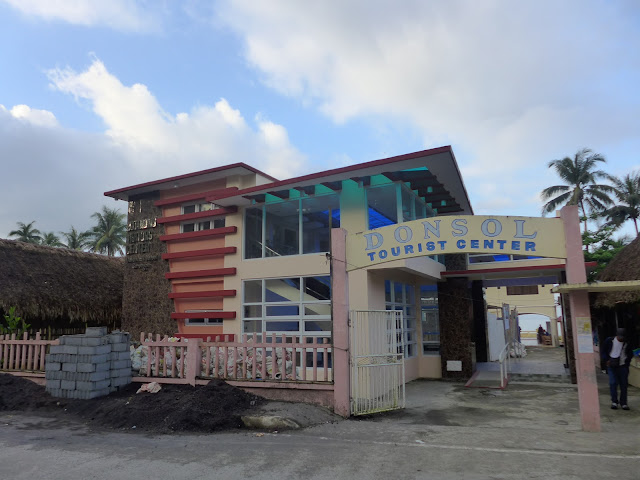 It paid off to go early. We were the first group in line. By the time the tourist center opened, there was already a large number of people. We wanted to be among the first ones to go out.


In Sorsogon, Bicol, Donsol is one of the places in the world that offers the unique experience of swimming with the Butanding whales. The whale sighting season is from November to June, with a peak period for tourists from February to May when more sightings are expected. One advantage of experiencing this in the Philippines is how reasonable it is in comparison to other resort centers in the world that offer this. The package cost is less than a hundred U.S. dollars. And if you are lucky to avail of a promotional package price, it can go down to as low as $40.00 per person.

The first thing to do upon arrival is to register at the Donsol Visitors Center in Barangay Dancalan. The fee is 100 pesos for the locals and 300 pesos for foreigners. 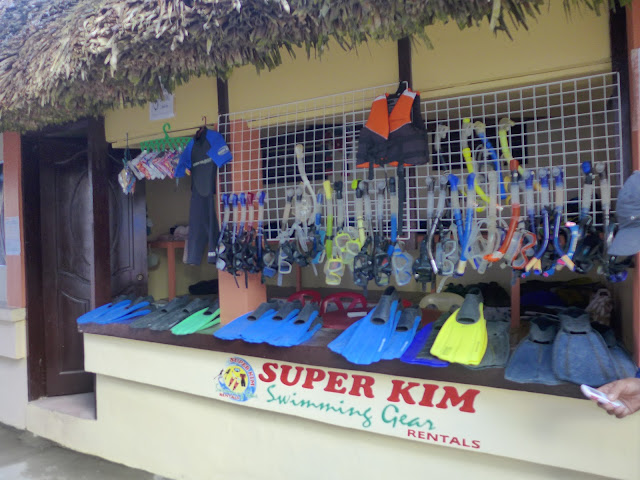 The package prices vary, depending on who you book with. Included in the package is the boat ride, a life vest, a BIO (Butanding Interaction Officer), and a spotter. For those planning to swim, there are stores renting out the needed gears and fins for snorkeling. 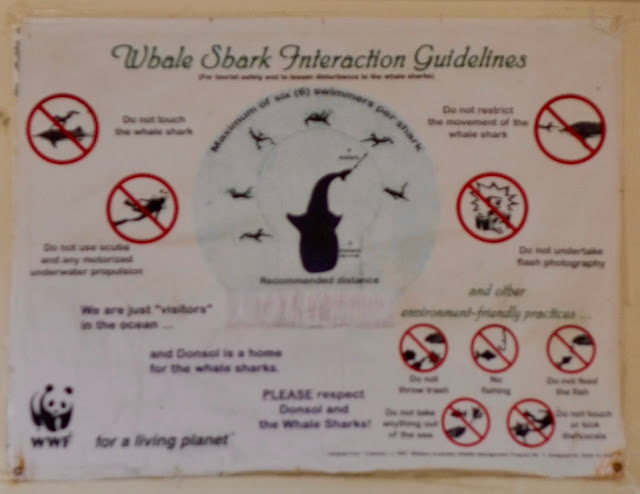 After registration, there is a short film to watch, to familiarize the visitors on how to properly interact with the butanding whales. Interaction with the whale sharks is regulated by the local Department of Tourism. 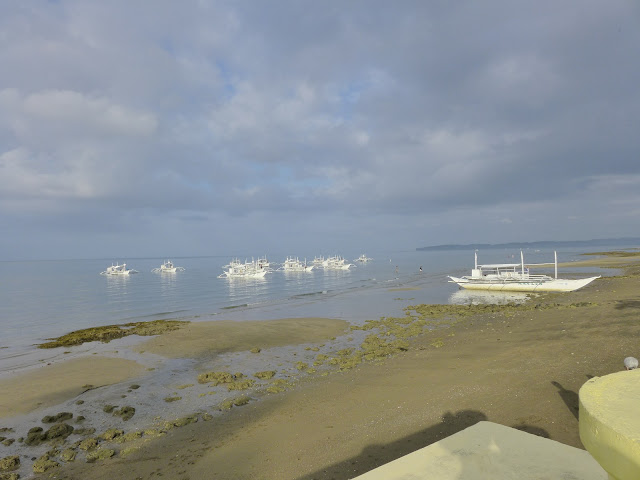 Our boat is ready and waiting for us. 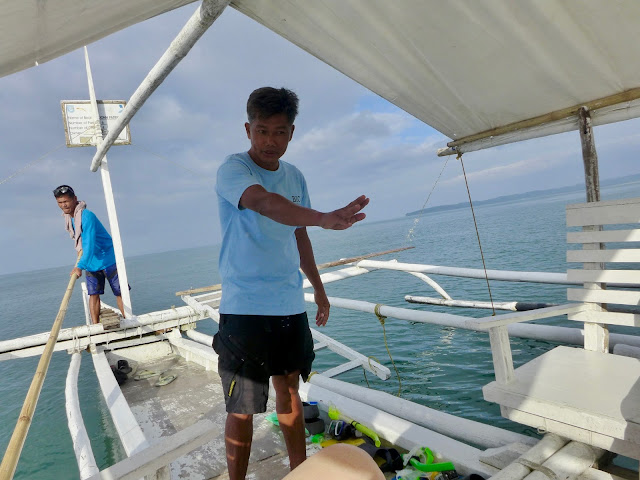 Our BIO gave us the final instructions on how to prepare for getting into the water, plus a recap of how to behave around the whales.

Butandings are identified as "whale sharks" (Rhincodon Typus). They are large tropical sharks - the largest known fish that swim to the surface in warm waters, making it possible to see them easily.  They have small teeth and their diet consists of plankton which they strain with their gill rakers. They can grow to as long as 60 feet (18.3 meters).

Although, they have been around in Donsol for a long time, the locals believed them to be dangerous. Fishermen used to shoot them when they got caught in their fishing nets. They were the victims of poachers, too.

It was not until 20 years ago when a possible interaction with the whale sharks was discovered. There was a group of scuba divers led by Romir Aglugub - a PADI (Professional Association of Diving Instructors) diving instructor. On December 26, 1997, he came to notice the presence of the Butandings and interacted with them. He led the other divers with him into the water, who were, at first, not sure whether it was safe to interact with these whale sharks. From that encounter, a video footage was taken. This video was passed on to the media and WWF-Philippines (Worldwide Fund for Nature). This became the basis for how Donsol became known as a world-class site to experience swimming with the Butandings.

To protect the sharks, the WWF set guidelines: boat capacity allows up to 6 swimmers using only snorkeling equipment; scuba divers are not allowed; keep a distance of, at least, 3 meters from the sharks.

Donsol, Sorsogon's whale shark sightings were featured by Time Magazine in 2014 and was rated as the "Best Animal Encounter in Asia." 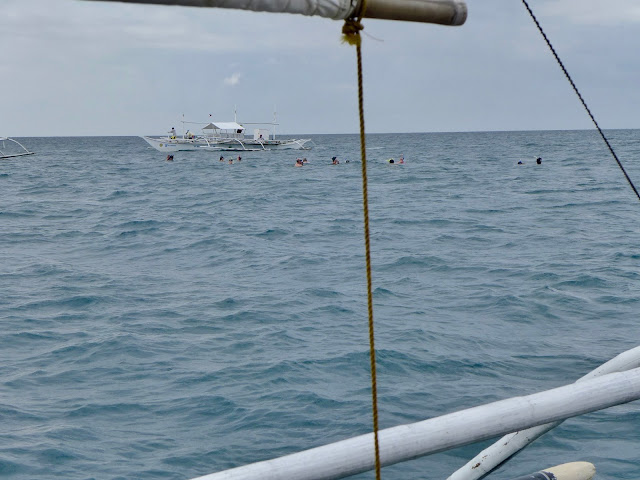 It was a good sign to see other people already in the water. This meant that there had been a sighting of the whale. 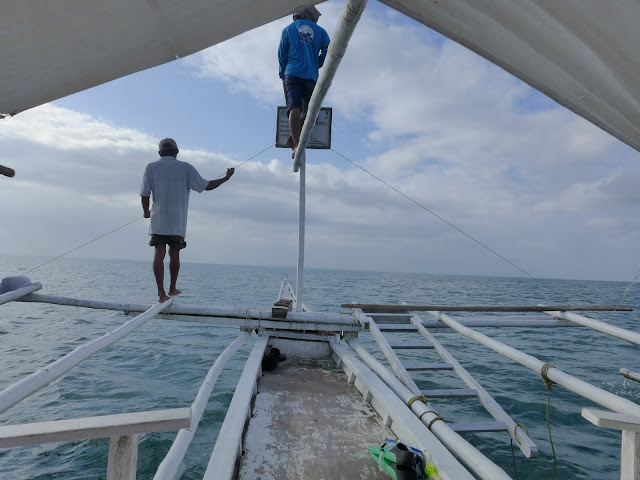 Our spotter - our look-out man,  is at his post. 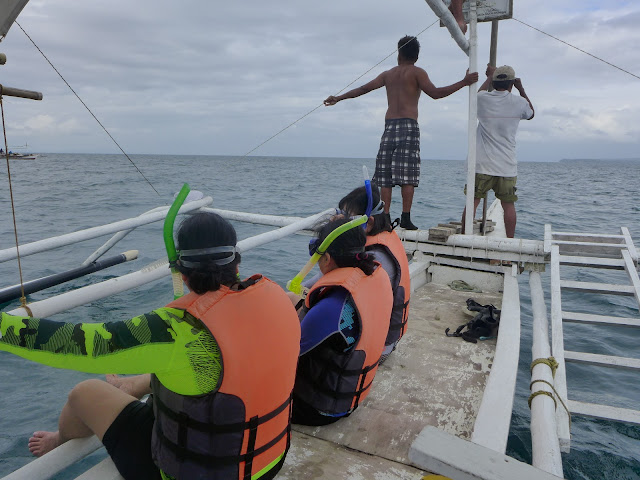 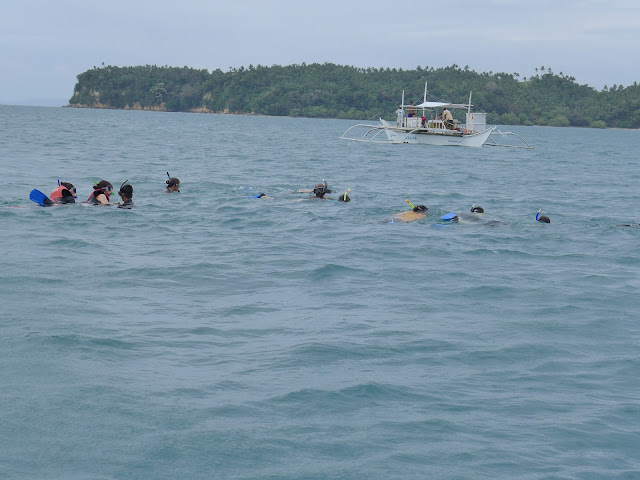 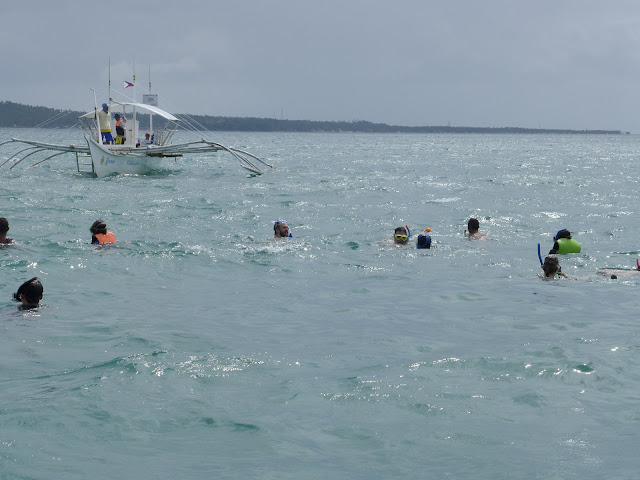 With a rented underwater camera, our guide was able to take pictures of the giant, gentle creatures...here is one of them. 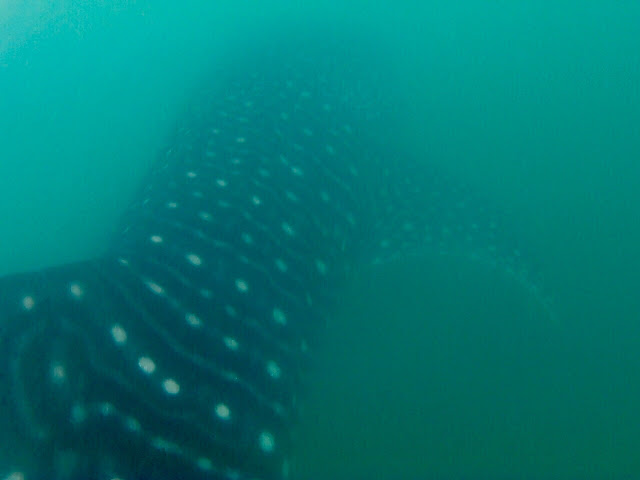 Donsol, located in the province of Sorsogon in the Bicol peninsula, has become the "Whale-Shark Capital of the World" in the last decade or so, thanks to the presence of the butandings which are referred to as the world's biggest fishes. This place has become a sanctuary for the butandings because of the abundance of krill and plankton in her waters, coming from two rivers in Donsol. 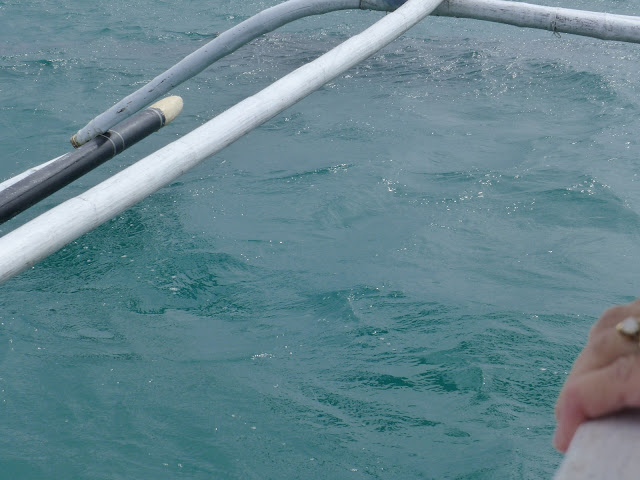 At the top of this picture was a Butanding (now underwater) that flipped its tail to say "goodbye." What  thrill!


Though, we didn't get to swim with the whale sharks, we at least, got to experience a butanding sighting.


And for those who get the chance to interact closely with the butandings, noticeably, is their wide mouth (sometimes up to two meters wide) lined with thousands of tiny teeth. But it is in the gill rakers, after the water is sucked in through their mouth, where the food settles, as they feed on the krill and plankton. 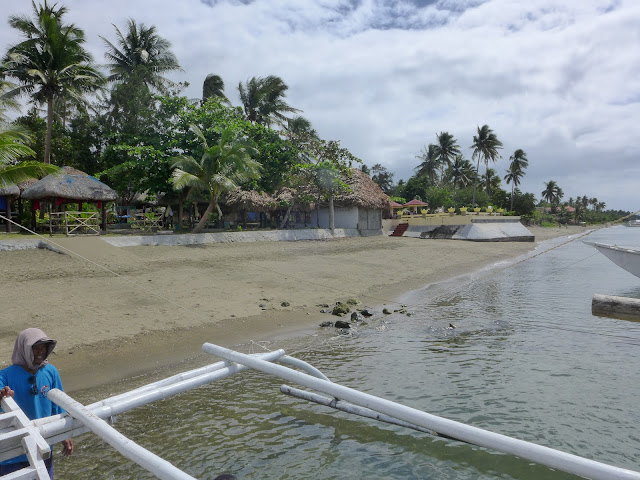 Back at the center, we went straight  to the bath house to shower and have a quick change. Then, we chose a spot under the nipa roof to enjoy a catch of the day by a local fisherman... 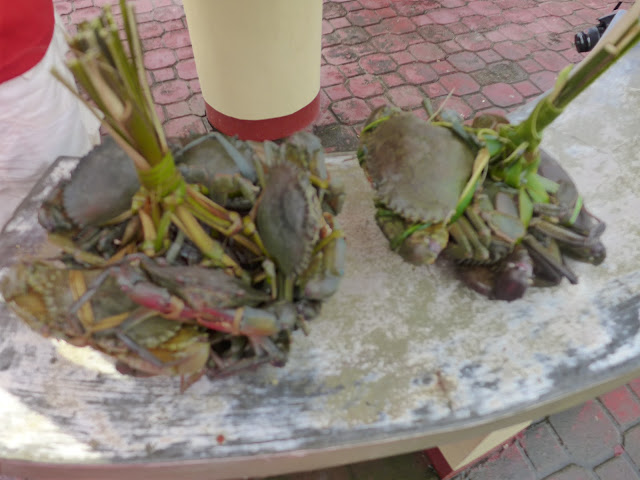 ...crabs that we had cooked - steamed, and eaten with a concoction of vinegar, garlic and salt, with steamed rice, along with other Bicolano dishes.

We just spent a couple of hours in Donsol, however, there is more to experience here, such as the Evening Firefly Tour at Ogod River; the Donsol River Cruise or the Shrimp-Catching Night Tour which gives the visitors a good look at aqua farming.

Donsol is just one among the wonderful places to visit in the Bicol region.
Posted by yolanda at 12:54 1 comment: