For the adventurous travelers, going around Spain on your own is very doable and economical. And when I travel with my family, the first thing we do is to take a walking tour of the city, which is free most of the time, and then, after, we decide to reserve and buy tickets to further explore.

In our walking tour in Sevilla, Spain - courtesy of Pancho Tours, one of the places we went to was Plaza de España. 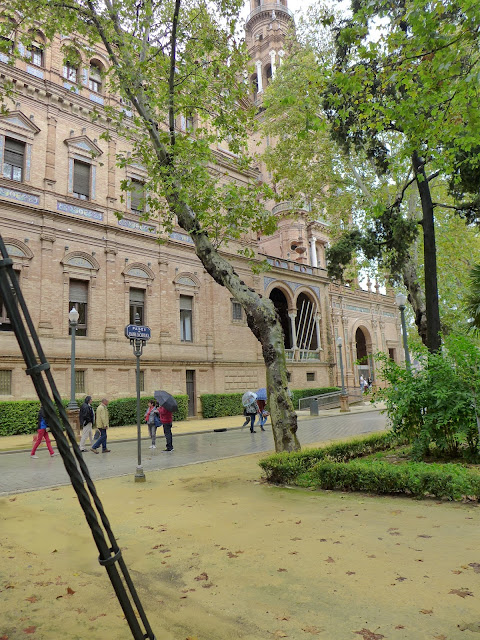 Plaza de España is located inside the Maria Luisa Park, right next to Avenida Isabella la Catolica, along the Quadalquivir River. This was the last stop in our walking tour.

We accessed this place through walking along the avenue, entering near the Teatro Lope de Vega, after hearing the historical details about the cathedral, the La Giralda Tower, and the Fabrica de Tabaco.

This plaza is also reachable by public transportation from the Prado de San Sebastián, which is serviced by metro, by bus, or by tram. 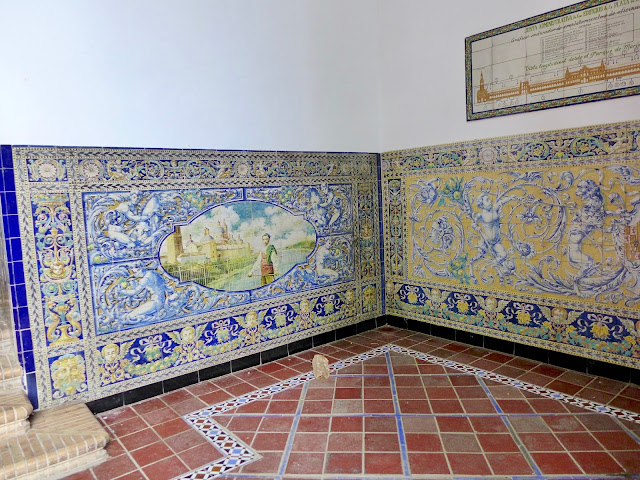 Upon entering the building, we were delighted to see the beautiful designs of the azulejos (painted ceramic tiles), as my daughter and I had taken several classes in ceramics and this was one of our interests to check out in Spain. 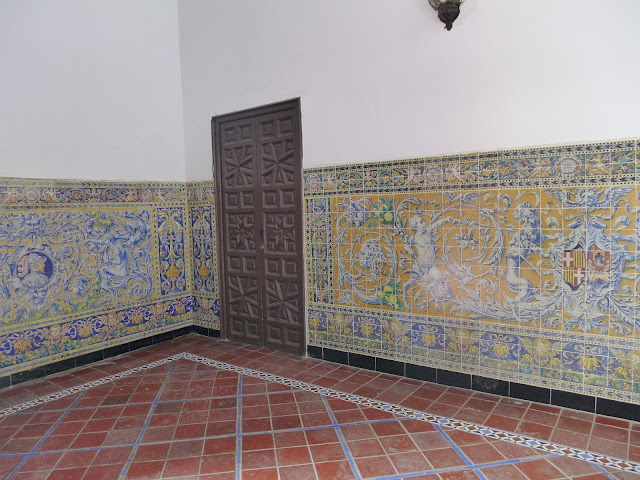 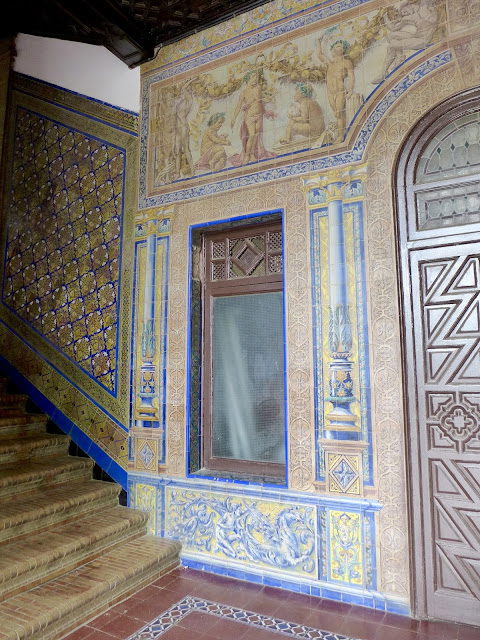 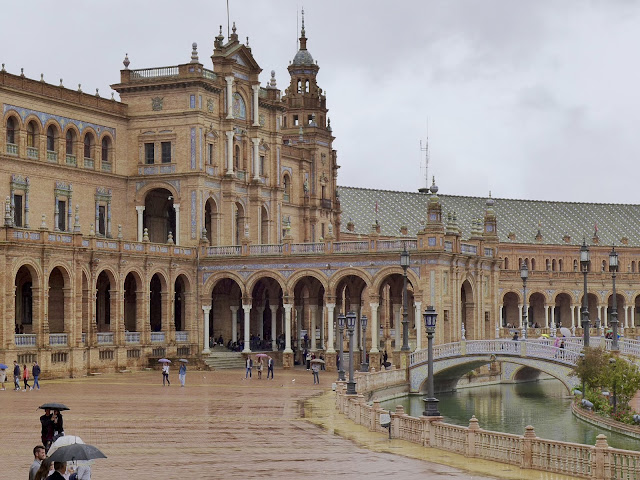 Plaza de España was built for the Ibero-American Exhibition of 1929. In this international exposition, with Sevilla as the host city, this was the Spanish pavilion - one among several located around Parque Maria Luisa (Park Maria Luisa).

This world fair - Exposición Iberoamericana de 1929 - was held from May 9,1929 to June 1930,  to foster better relations between Spain and the other participating countries - the United States, Portugal, Cuba, and some countries in South and Central America which were former colonies. At the same time, Spain aimed to showcase her culture, and social and economic progress.

Don Anibal González was the Spanish architect for the prominent building surrounding the Plaza de España, along the whole length of which were the various Spanish regions and provinces of Andalusia.

Next to the cathedral, this is deemed as the second most beautiful structure in Sevilla. The large scale and intricacies of this building design were simply grand!

The city of Sevilla planned and prepared for this major event for 19 years. Though, it was smaller in scale than the one hosted by Barcelona in the same year, nevertheless, it was grandiose in scope. As part of the preparation, the city embarked on a modernization program which included putting up new hotels and widening the old, medieval streets to make room for more vehicular traffic, in anticipation of the large number of visitors. Most of the foreign pavilions were designed as permanent structures and, now, some are used as consular offices, a museum, a dance studio, ......

In this building, the Salón del Descubrimento de America was  and is housed. This was the largest exhibit of all which included the personal belongings of Christopher Columbus - letters, documents, maps and other things related to the discovery of the Americas; the last testament of Hernan Cortés - he was in the first wave of Spanish colonizers in the colonization of the Americas, and was responsible for the fall of the Aztec Empire and the take over of a big section of the main city in Mexico in the early 16th century) ; dioramas depicting special moments in Spanish history. A replica of the "Santa Maria" and her crew - the ship of Columbus, was displayed on the Quadalquivir River.

According to our tour guide, the big investment made for this  by the Spanish government of this exposition did not pay off. The expected number of visitors did not materialize, mainly because the international exposition in Barcelona - which was much bigger - was taking  place at almost the same time and for a longer period of time. Barcelona was visited by a big number of international visitors that Sevilla was hoping for. 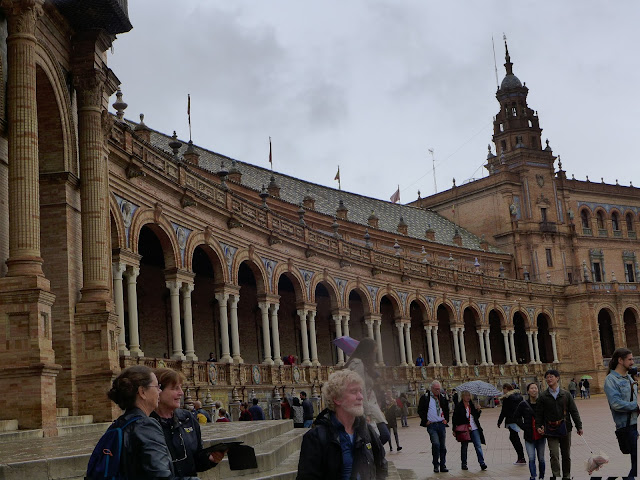 The Spanish pavilion is a brick building in a semi-circular fashion, with coaxial elements of bricks and  water showing off Spanish craftsmanship, with a fountain that draws the eye to the center.

The size of the plaza measures about 50,000 square meters. There is a portico on the ground level which is bordered with balustrades and balconies. 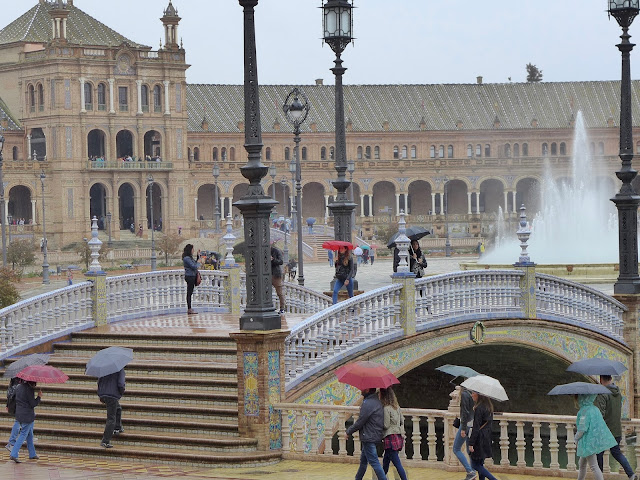 From the building facade into the plaza, there is a wide pedestrian path of bricks, a canal, then the plaza where the fountain is the focal point. To crossover, there are 4 bridges - representing the four ancient kingdoms of Spain: Castille, Aragon, Navarre, and Leon - to connect to the center of the plaza.

In the spring and summer, row-boat rides can be taken along the canal. We came on one rainy day, last fall, and this boat ride was no longer available for the tourists. 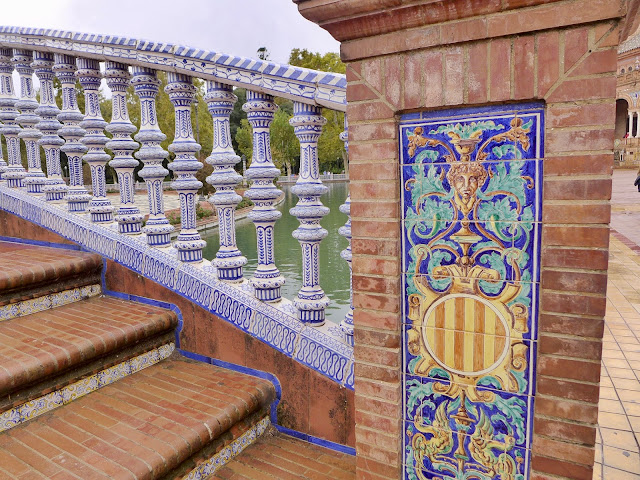 The bridges exemplify Spanish ceramic craftsmanship in the use of ceramic tiles, ceramic balustrades and railings, to accentuate the brick works. 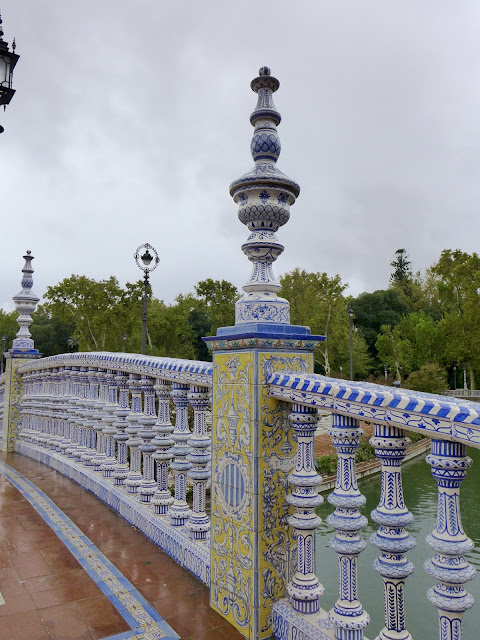 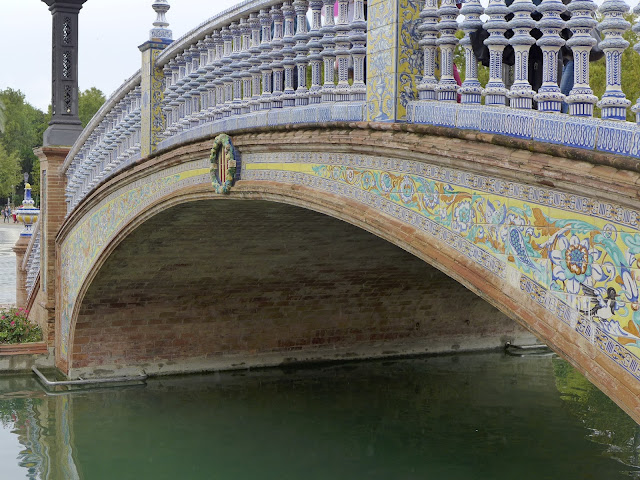 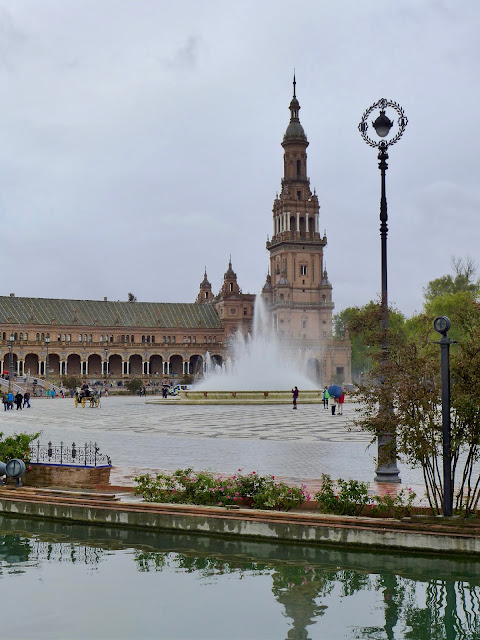 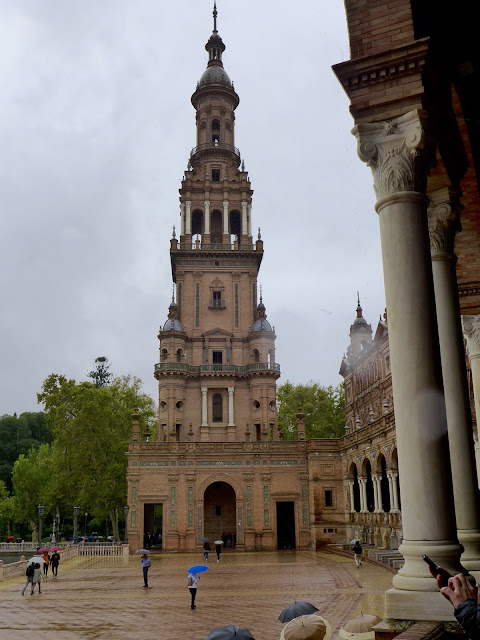 The semi-circular building is finished on each side by the north and south towers.
**********
Pabellones de las Regiones Españolas (Pavilions of the Spanish regions) - these are the ceramic provincial alcoves which featured the different Spanish provinces and regions, along the canal wall. 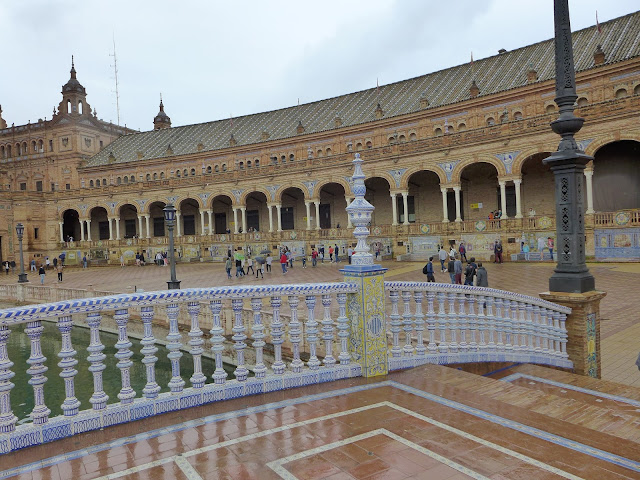 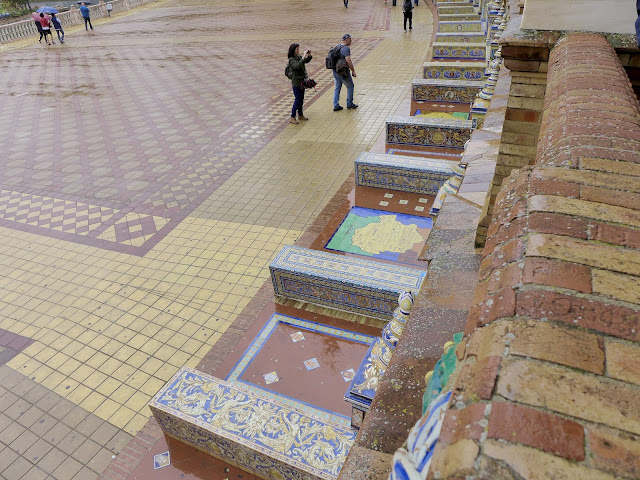 The design of each provincial alcove included a tableau and the side borders/benches extending out, with the use of azulejos to represent the arts and culture and other unique features of each province, along with a map. 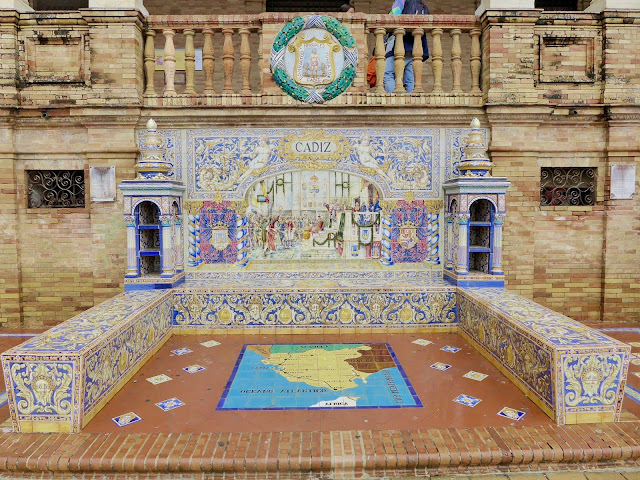 Here is one of the alcoves - for  Cadiz


Cádiz, as explained by our tour guide, had played a very significant role in the progress of southwestern Spain. The city of Cádiz is the capital of the province of Cádiz, which is part of the autonomous community of Andalusia. An autonomous community was defined in the Spanish constitution of 1978 as a region being guaranteed to have limited autonomy to self govern  their nationalities and region.

It is the oldest city in Spain that has been continuously inhabited, and has been the base of the Spanish Navy since the 18th century when the Spanish Bourbons came into power. Also in this city is a prominent educational institution - the University of Cádiz - which was founded in 1979 and is known for its medicine and marine curricula.

In our bucket list now to visit, this is a typical Andalusian city, a place with old-world charm - with beautiful vistas, well-preserved historical landmarks, and remnants of the wall in the Old City. In the newer parts of the city, there are numerous parks with exotic plants, with  humongous trees that were supposedly introduced by Christopher Columbus to Spain, from seeds he brought home from the New World.


The architectural style of Plaza de España reflects the  Renaissance and Islamic influences. The Mudejar style was emphasized during our walking tour of historic Sevilla. It refers to the Islamic influences on Spanish art and architecture which we saw all over Sevilla, during our walking tour. This resulted in the architecture that was created by the Muslim under Christian rule. The sophisticated designs are elegant and intricate in the use of horseshoe-shaped arches, minimally landscaped and peaceful-looking courtyards with a drain system, intricate carvings with repetitive geometric designs and motifs from nature, and the use of tiles.

Nature is integrated in the overall design, in palaces, houses, mosque, and as we have seen at Plaza de España. Particular attention is given to having beautiful, lush gardens in the courtyards to provide shade and to create a restful place. There are geometric patterns on the walls, the doors, and on the floors. Fountains and reflective pools both indoors and outdoors serve as focal points in the open spaces. 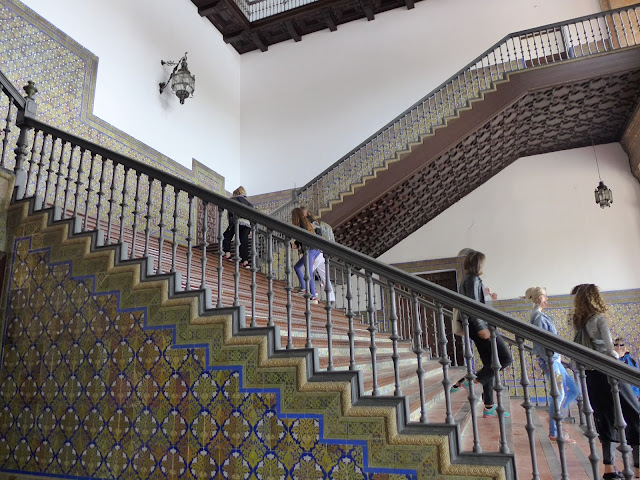 The Mudéjar style evolved from the gradual mixing of Islamic architectural features with the Christian artistic styles from the north. When Sevilla was reconquered by Ferdinand III in 1248, the prevailing Gothic style began to mix with the Almohad style. 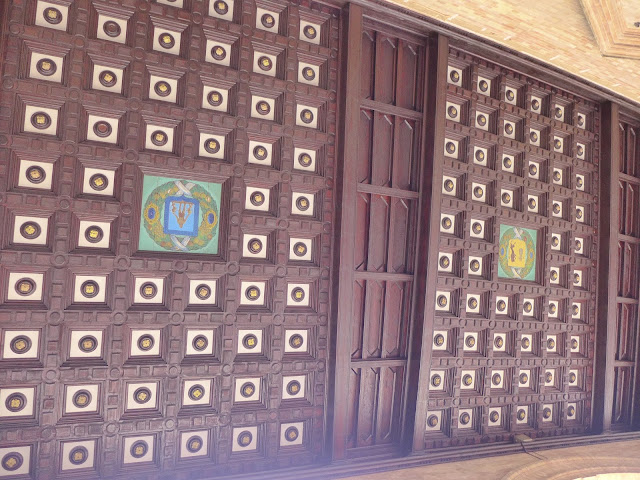 The Almohad style brought the schematic, geometric designs in ornamentation. This can be seen in some of the tile designs and in the doors.

There is more to see in Sevilla. In our three-day stay, we also got to visit the cathedral, climb up La Giralda Tower to get a panoramic view of the city, and walked by several iconic buildings and landmarks. With an extra day or two, it would have given us time to go to Alhambra or visit Cadiz. Maybe, next time!