Varanasi - the Hindustani pronunciation, is also known as Banares, Banaras, or Kasha. It is the spiritual capital of India,  on the banks of the Ganges in Uttar Pradesh. It is considered as one of the sacred cities in Hinduism and Jainism. It played a very important role in the development of Buddhism. It is believed that Buddha founded Buddhism here in 528 BC when he gave his first sermon. It is one of the oldest, continually  inhabited cities in the world.

Located along the National Highway 2, Varanasi connects to several cities - Calcutta, Kanpur, Agra, Delhi, and served by the Varanasi junction and an international airport.

The religious importance of Varanasi continued to grow in the 8th century when Adi Shankara - a philosopher and theologian who is credited with defining the main current thoughts in Hinduism, consolidated the doctrine of Advaita Vedanta, which "refers to the recognition that the true Self (Atman), is the same as the highest Reality (Brahman)." Add established the worship of Shiva as an official sect in Varanasi, even while under Muslim rule, in the 8th century. The city remained as the center for culture and education among the Hindu intellectuals and theologians during the Middle Ages.

Adi Shankar also pointed out the difference between Hinduism and Buddhism: Hinduism believes that the self (soul) exists, while Buddhism asserts that there is no soul, no self.

He established the important role of monastic life in the traditions of Upanishads and Brahma Sutra, founding four  mathas (monasteries) at a time when monasteries were considered obsolete. He organised the Dashanami monastic order and founded the Shanamata worship tradition. This contributed much to the revival and spread of Advaita Vedanta.

It grew to be an important commercial center famous for its muslin and silk fabrics. Much of the local population is is employed in silk weaving, carpet making, and in the tourism industry.

There are other prominent figures who were born here and were responsible for the Bhakti Movement - a movement that provided for an alternative view to spirituality, regardless of caste or gender.

In 1507, Sikhism was founded by Guru Nanak Dev. A Sikh is a disciple. The fundamental tenets of this religion, in part, includes constant meditation of God's name upon a guru's guidance, living a "householder's life"  instead of in a monastery, with a duty to engage in "truthful action" and "selfless action" to others, to believe in the equality of all created beings, and to believe in God's grace.

Varanasi went through a cultural revival during the reign of the Muslim Mughal emperor, Akbar, in the 16th century. Modern Varanasi was built by the Maratha and Bhumihar kings in the 18th century.


Varanasi is closely associated to the  Ganges, with its many ghats - the embankments made with steps of stone slabs lying along the river bank, where the pilgrims go to perform  their ritual ablutions. The Hindus believe  that if they were to die in this city, they will earn their salvation, thus, making it a pilgrimage destination. 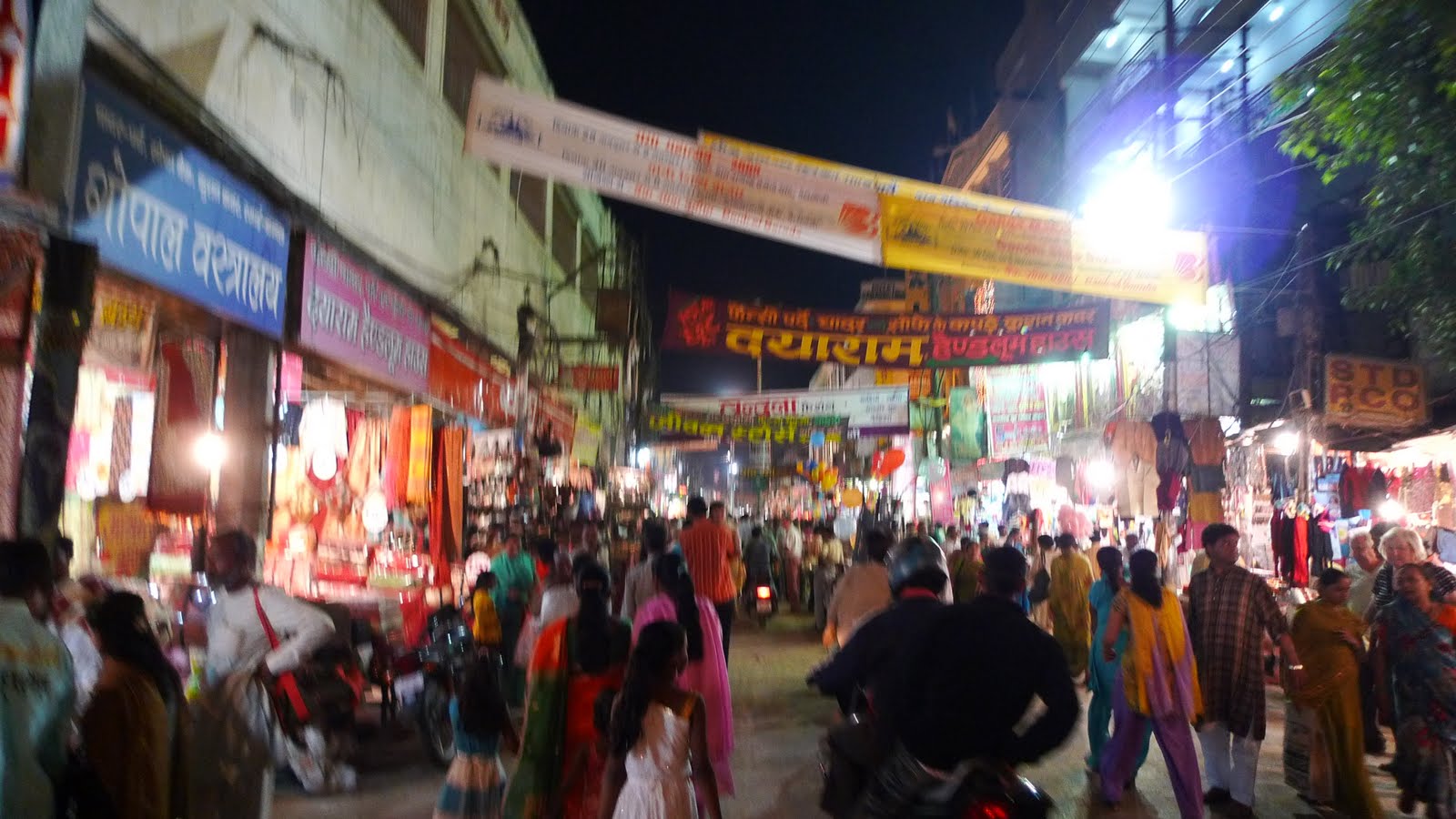 Tourists and locals, alike, filled up the streets on the way to the river. 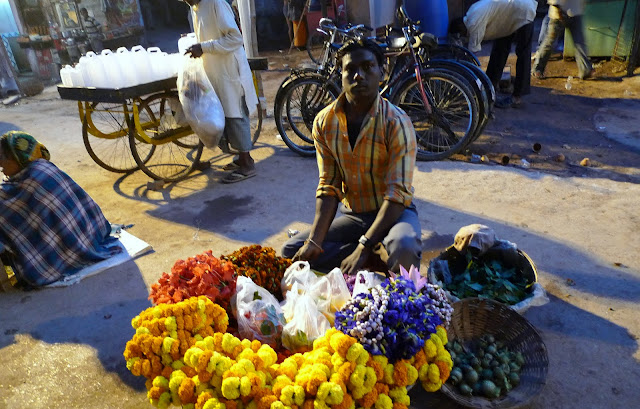 Flower leis, leaves and fruits were for sale.


The Hinduism ritual we were about to witness is called Ganga Aarti. This artistic, symbolic ritual is held at the banks of the Ganges River. It is an intricate ceremony that involves the use of light and fire, different colors, textures, and performers who use hand gestures and body movements to the sounds of drumbeats and songs sung to praise the deity. This is symbolic of the religious worship of the holy river, the Ganges. 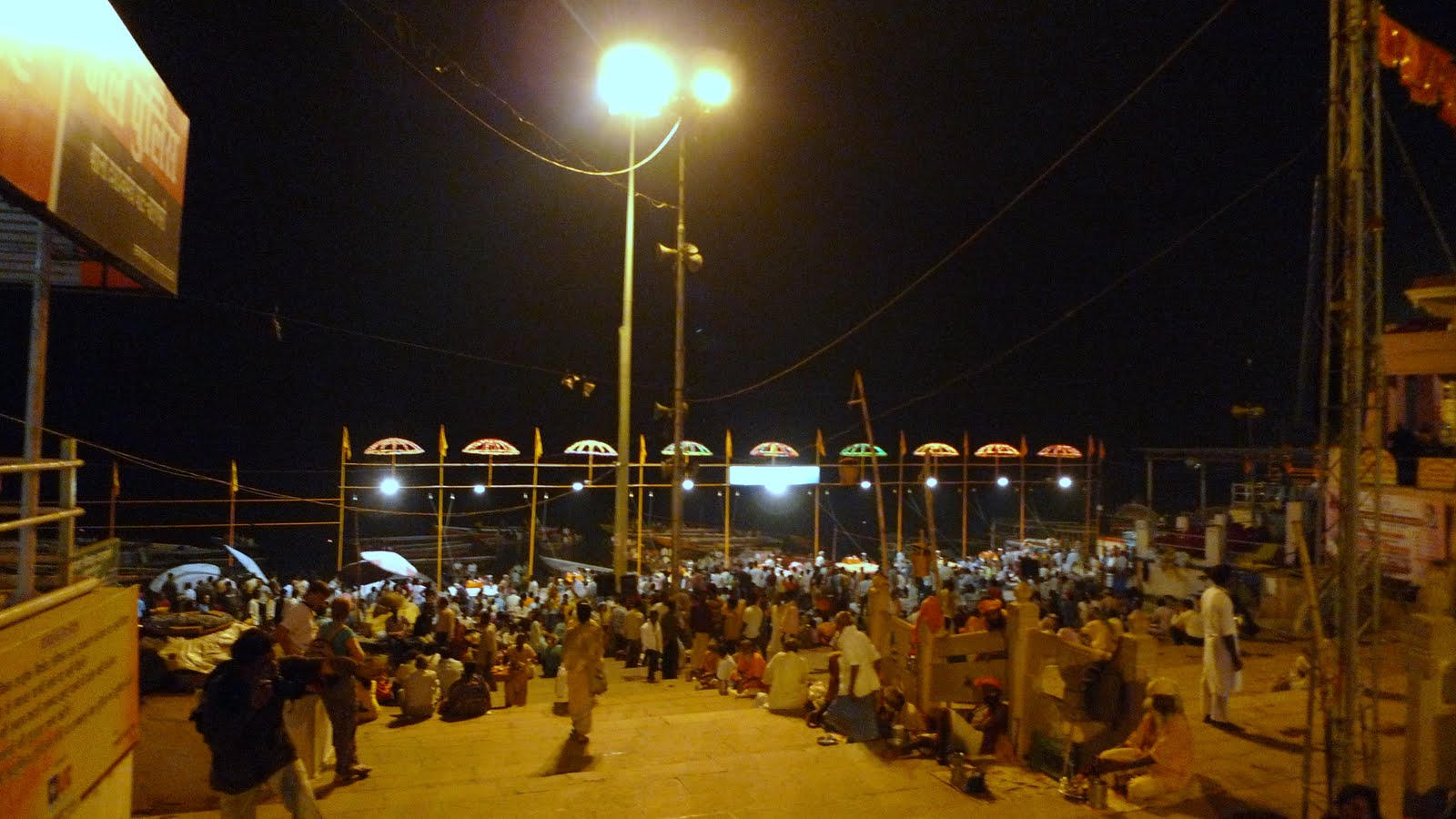 We are approaching the back of the center stage from which we were about to watch the ritual Ganga Aarti on the Dashawamedh Ghat. 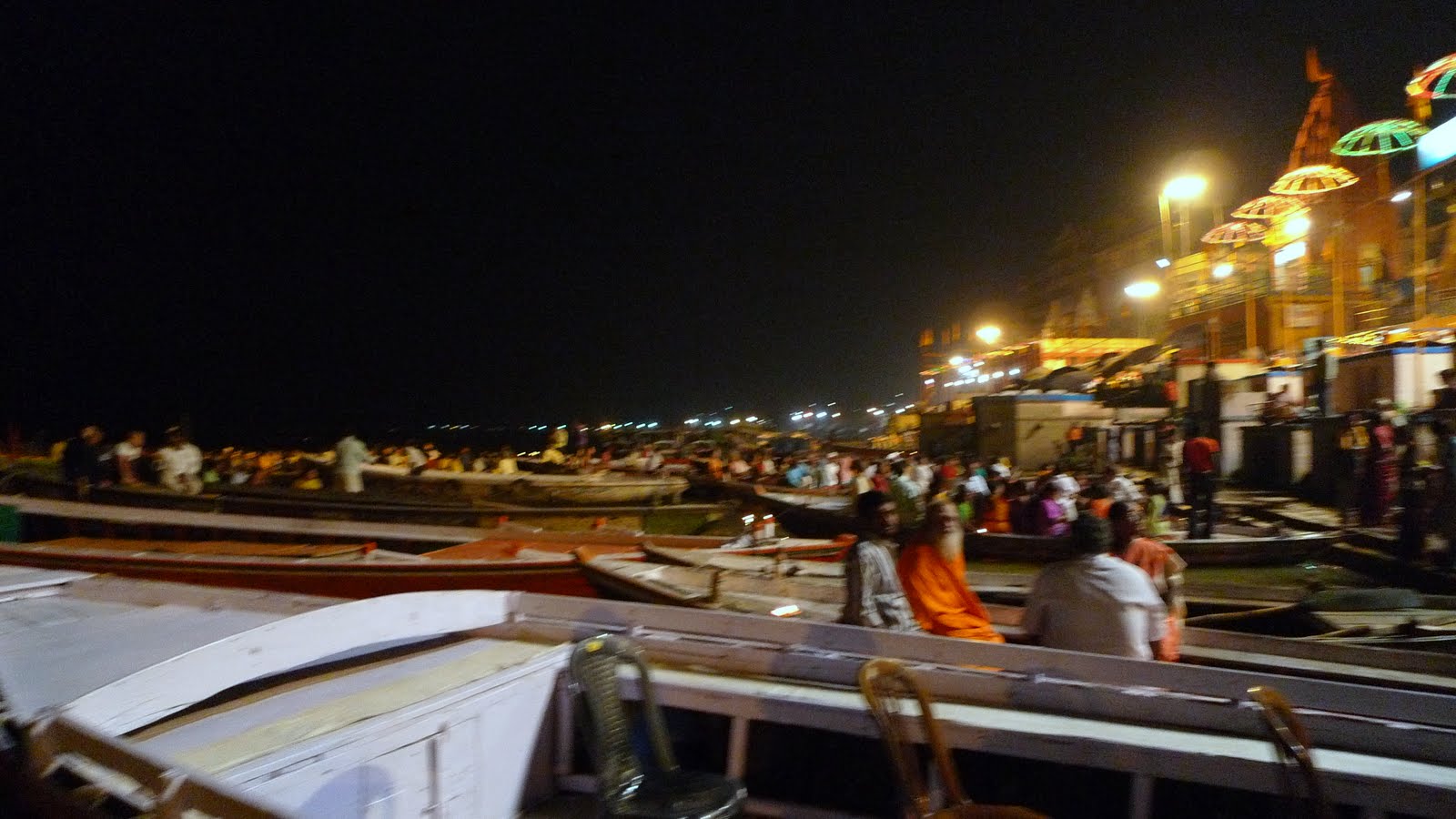 These are boats to rent, located to the left of Dashaswamedh Ghat


By boat, we went out at late afternoon to cruise along the river, to see all the activities going on, including the ritual of the dead, by the cremation site. At a certain distance, we were allowed to take pictures. But inspite of taking pictures according to the guidelines, our pictures came out distorted, even spooky,  as we were quickly shooting the proceedings. 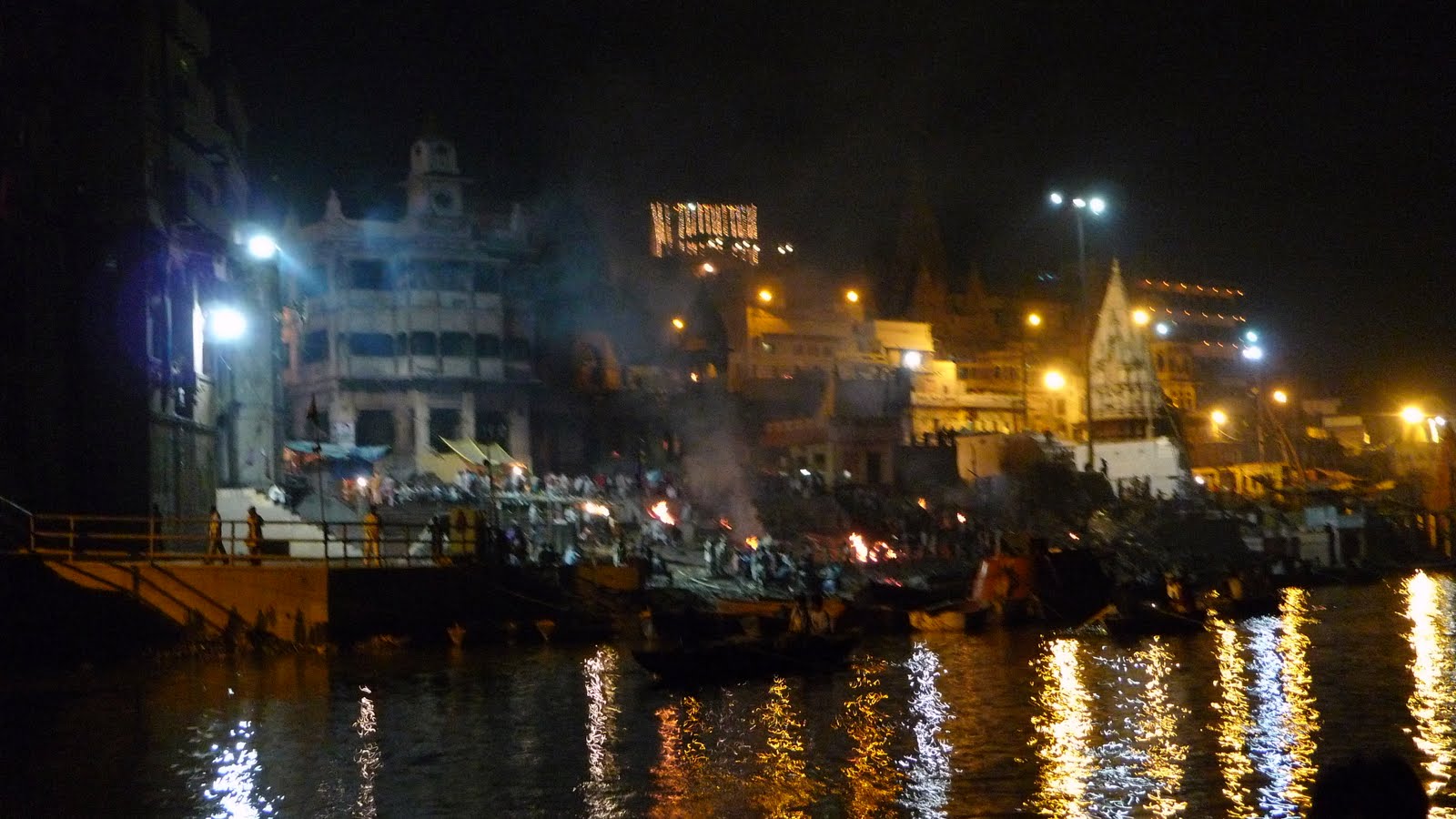 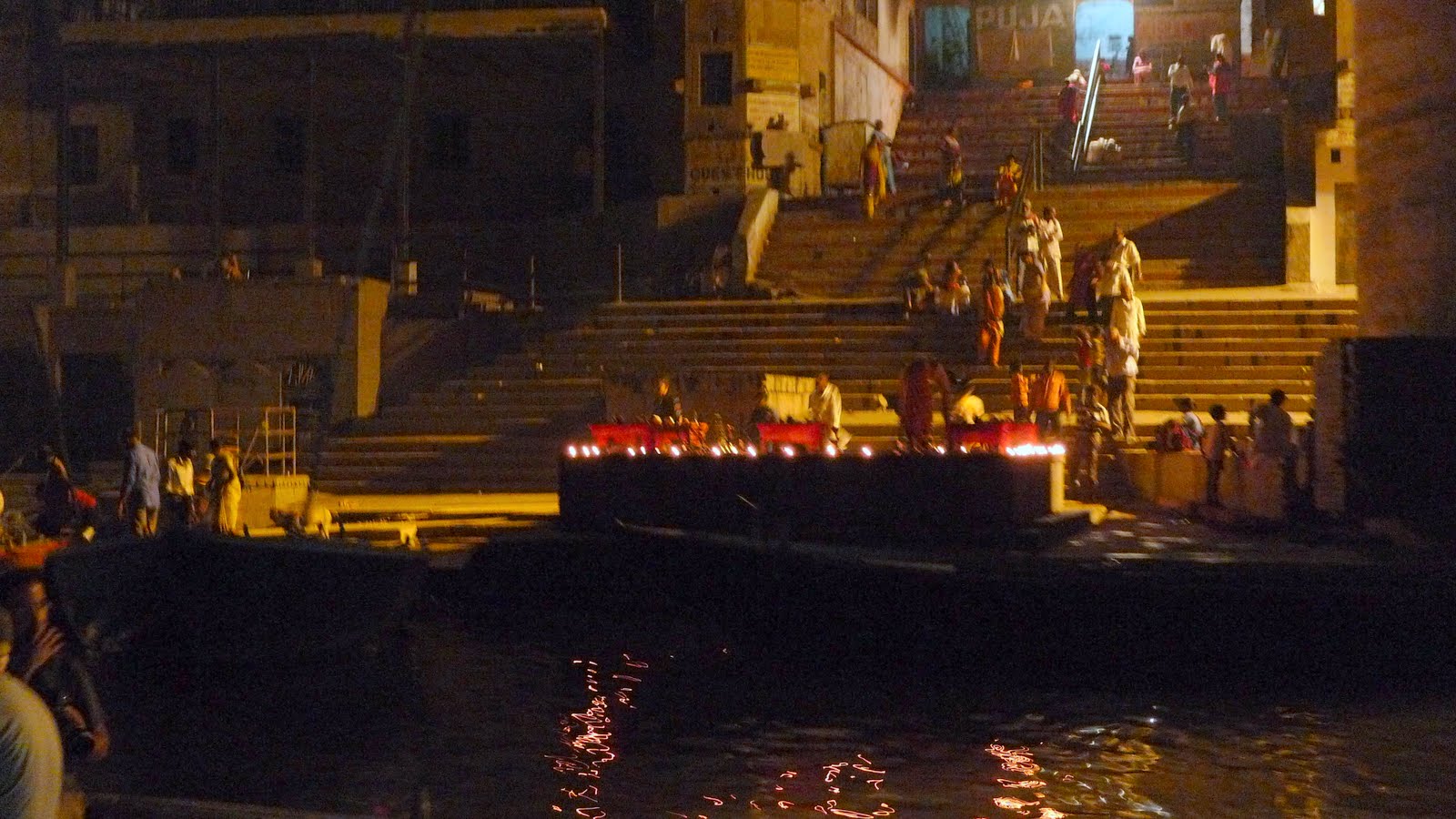 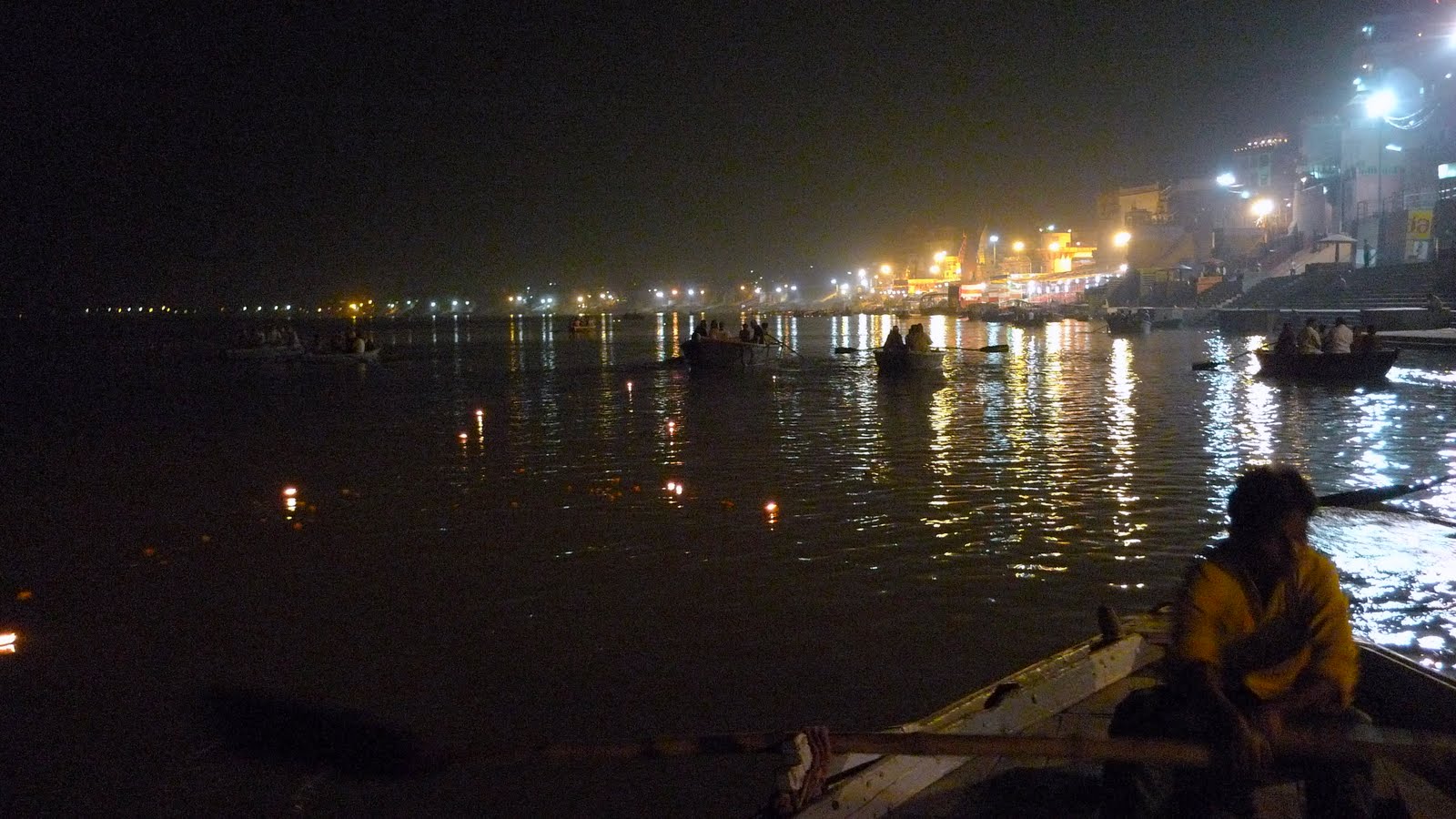 Candles were floating on the river. It made for a solemn site. 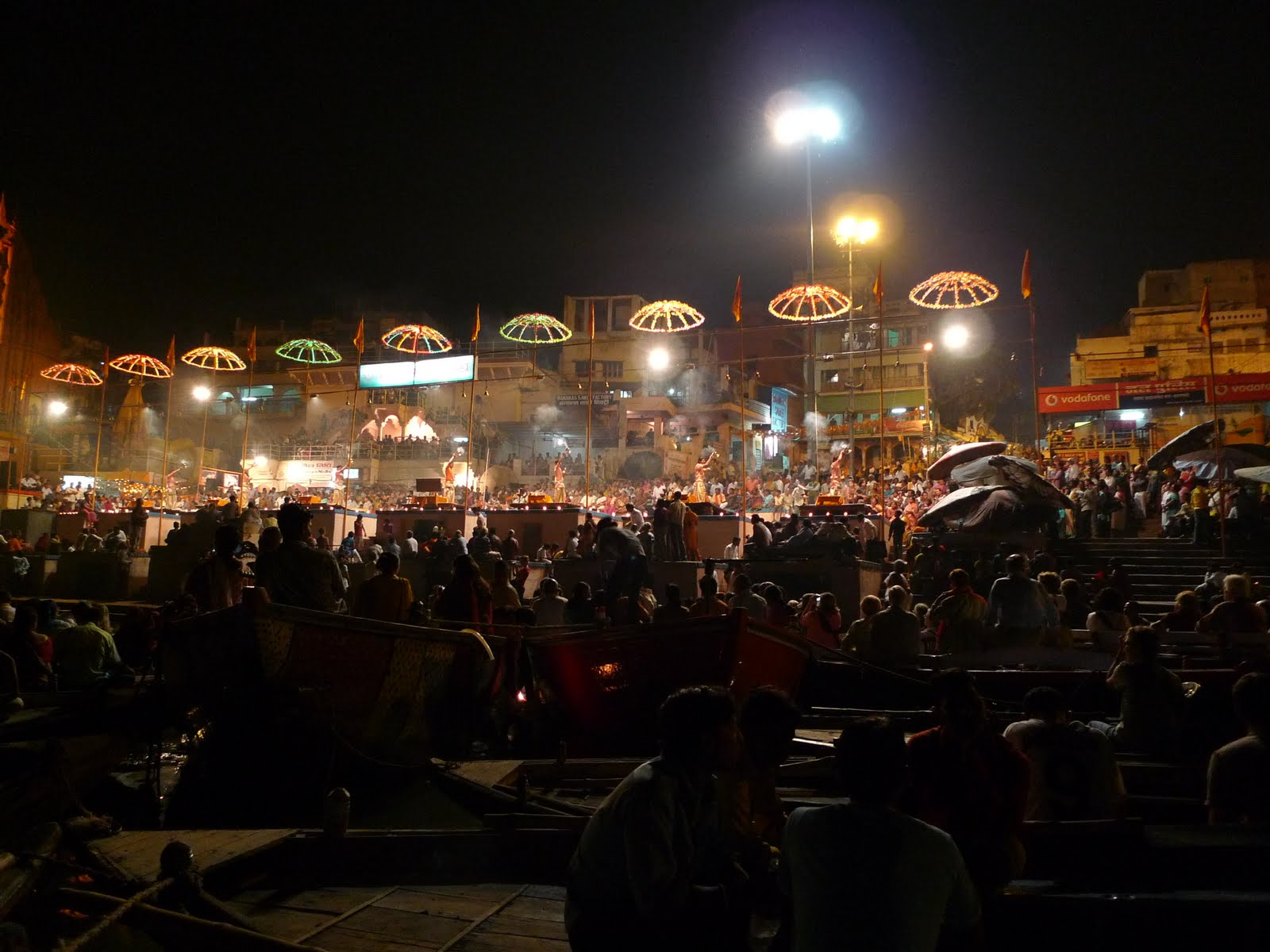 By sunset, we sailed back as close as we could get to the riverbank. 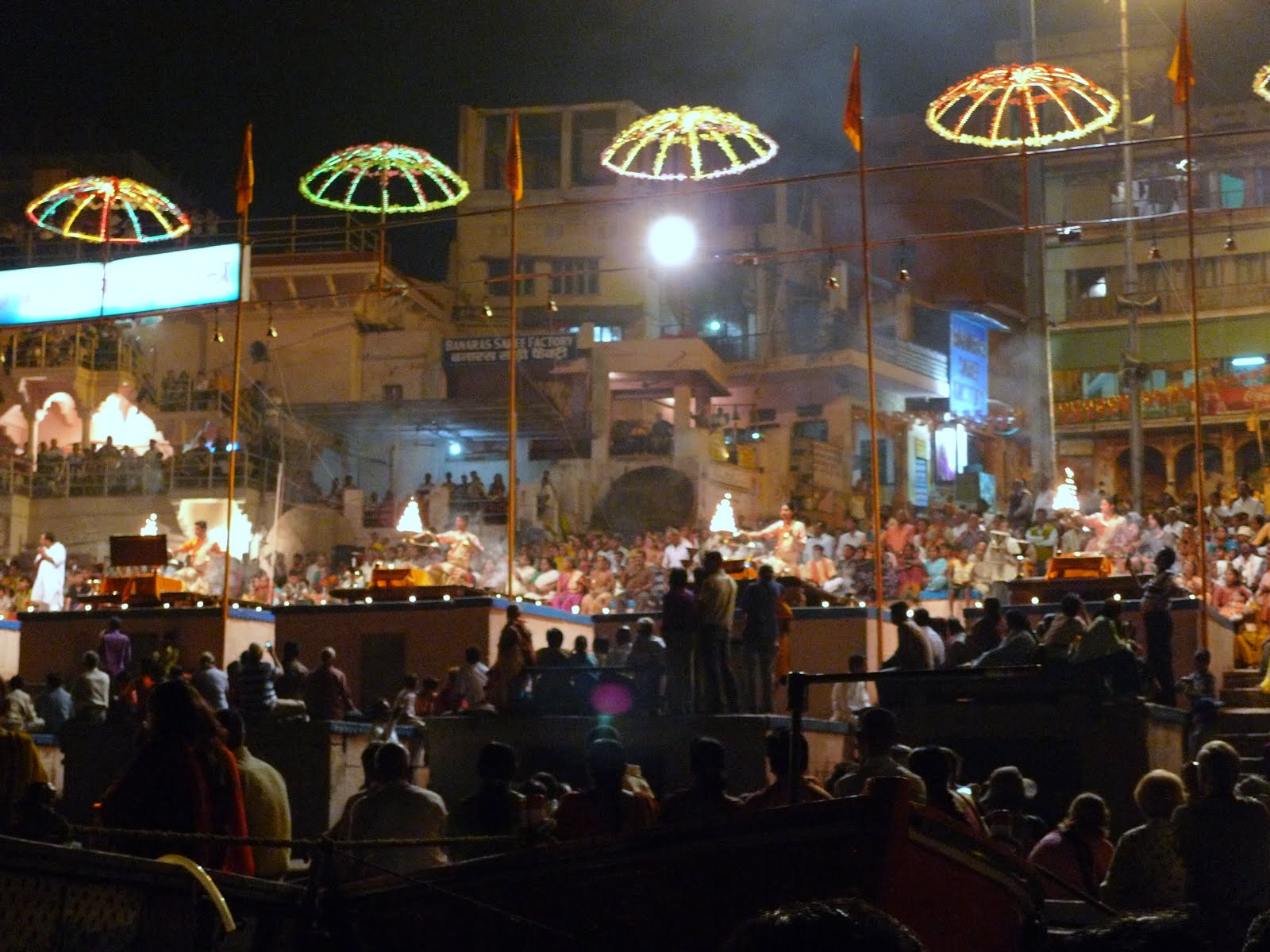 The Ganga Aarti ritual began. This is held every night. 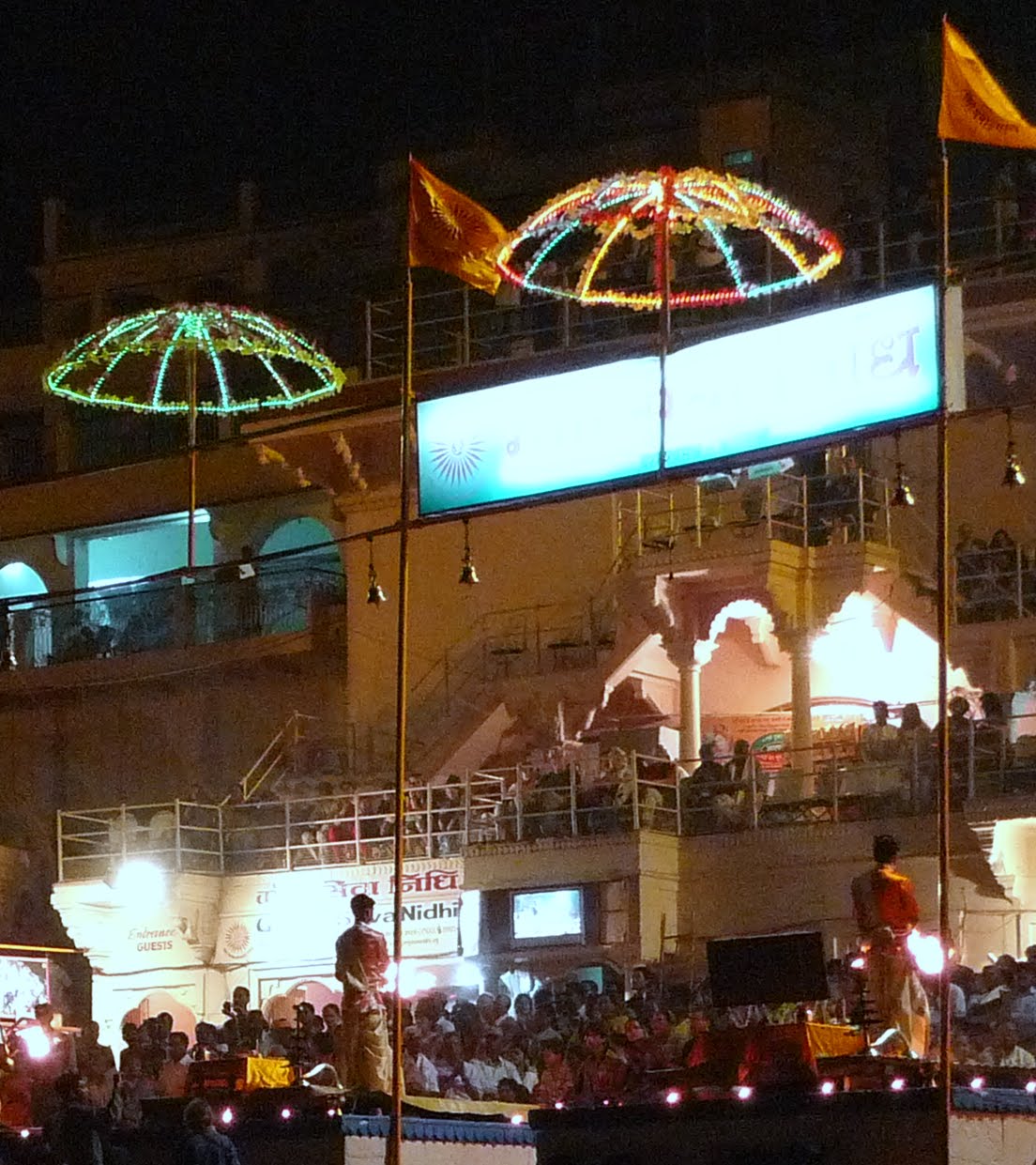 The drumbeats and songs set the tone and rhythm of this ritual worship. 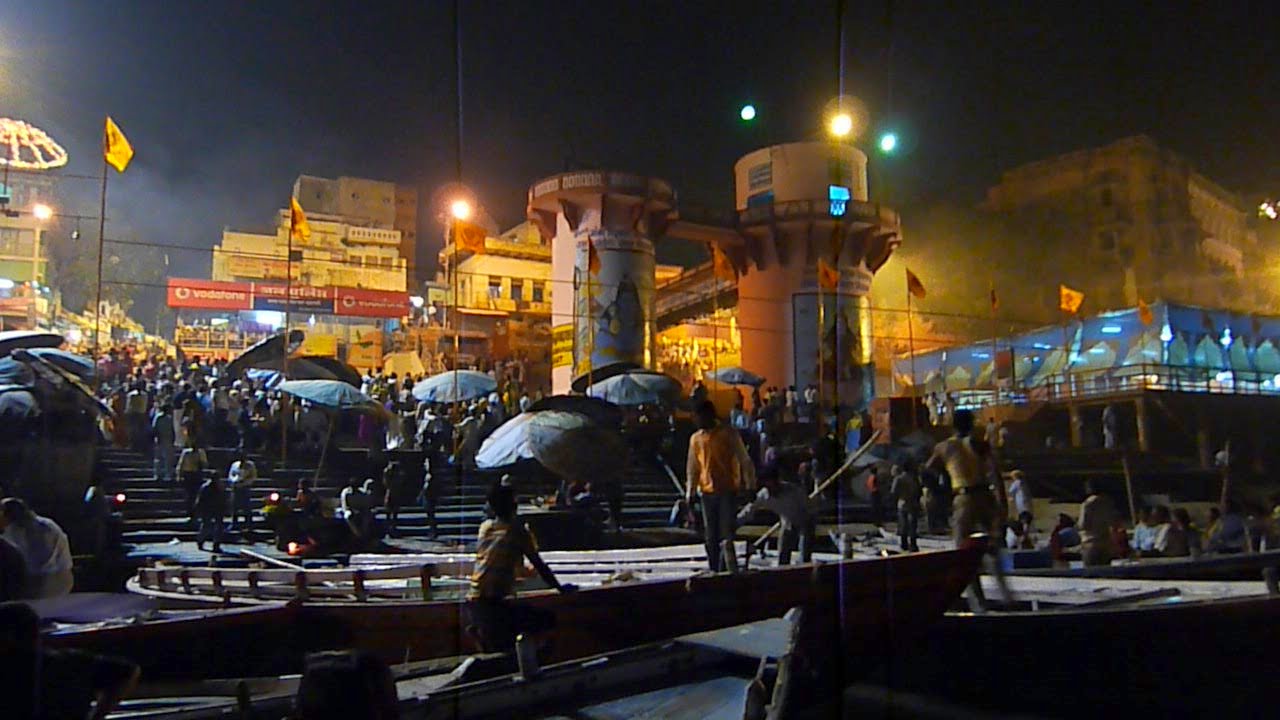 The next morning, we were back for another traditional practice - the sunrise ceremonies, a ritual where prayers are offered to the rising sun. 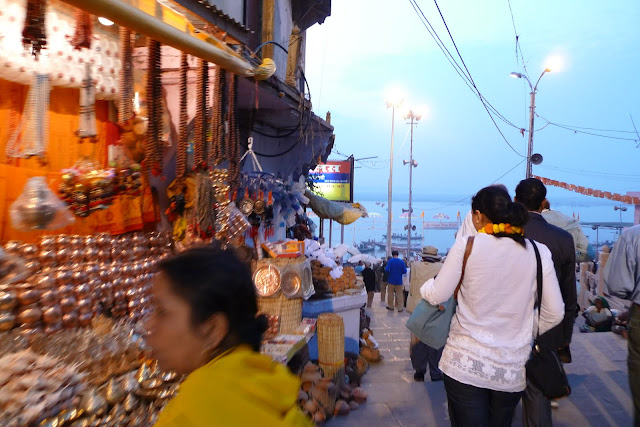 We are getting our supplies for the boat ride - flowers and candles. 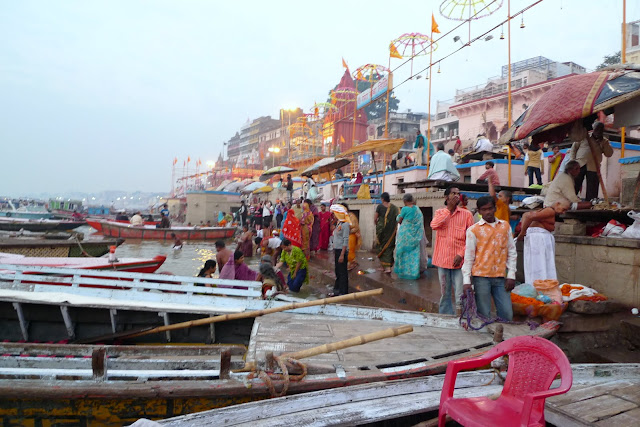 A boat had been reserved for us by our guide. 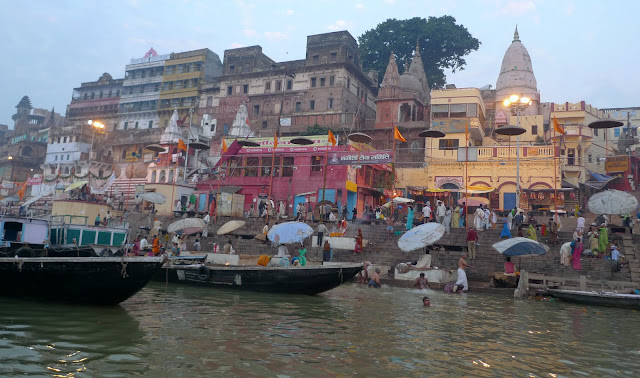 Our boat ride took us out.


The morning ceremonies began at early morning, on the Dashawamedh Ghat.  On our boat,  we headed into the river with fog cover, where only the street lights cast a reflection on the river, giving it a mysterious glow. 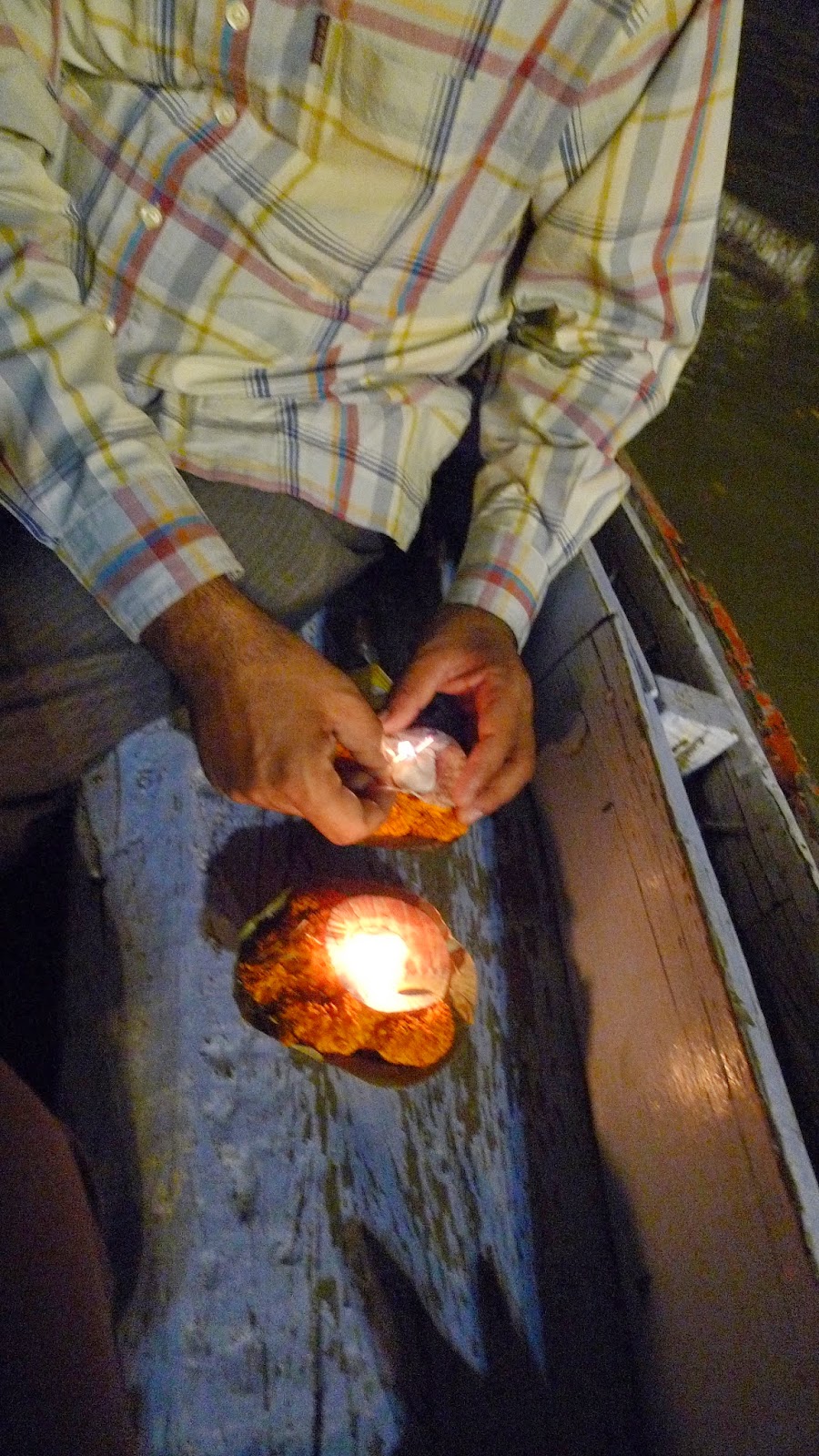 Our boatman prepared our candles, by putting a wide base and decorated it with flowers all around the candle. 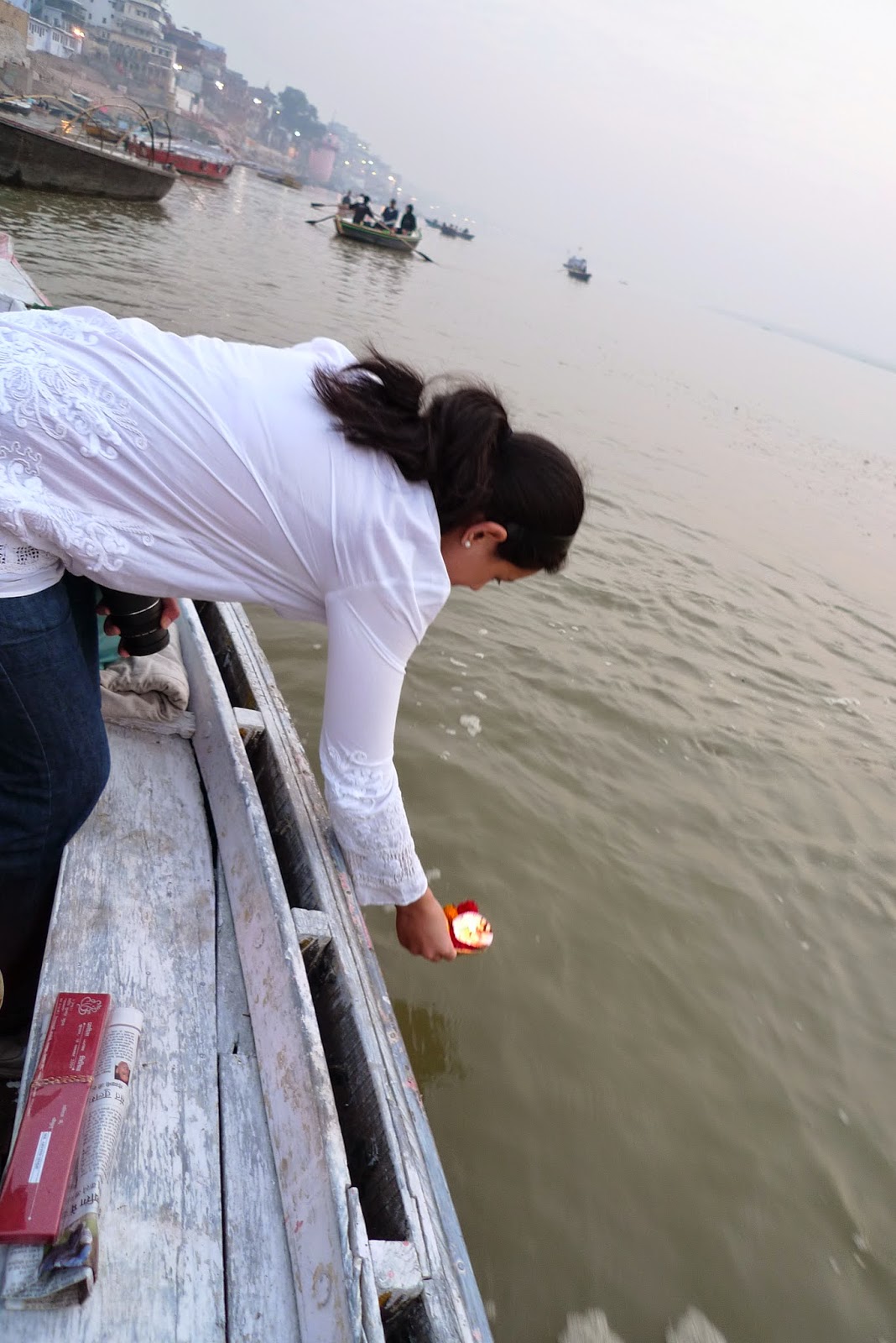 Then, we set our candles on the water as we said our prayers for our departed loved ones.


And soon, the skies had cleared up and we were able to observe more about our surroundings, including something that was floating on the water that looked like a coconut. As it got near us, it turned out to be a dead, old man. My daughter freaked out. Our guide explained that it was no longer allowed for people to walk into the water to die, nor to bury or leave the dead in the river. For this, there are several cremation sites along the riverbank. 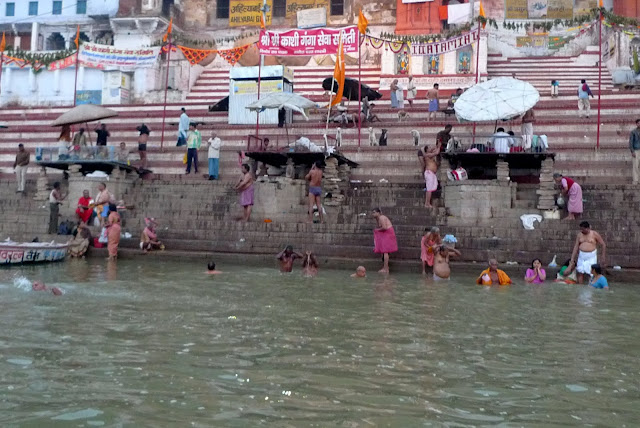 We caught a glimpse of the  early morning bathers who came from all over India, to clean and purify themselves in the water. 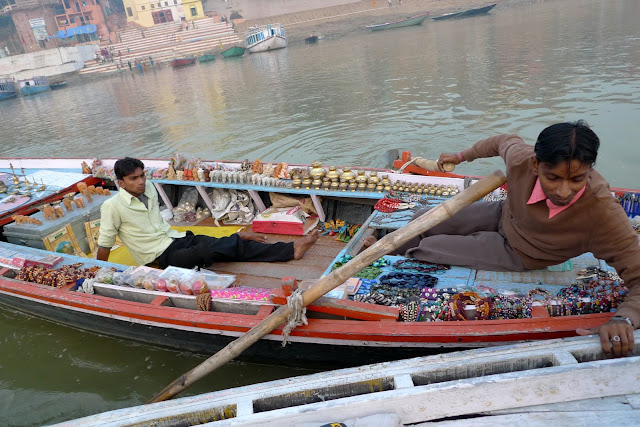 Boat-merchants were also plying the river. 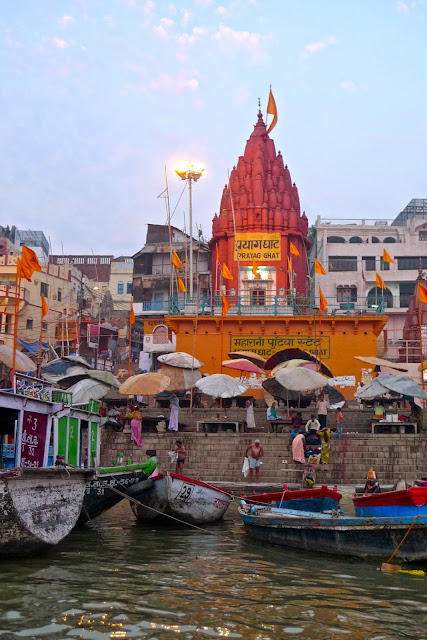 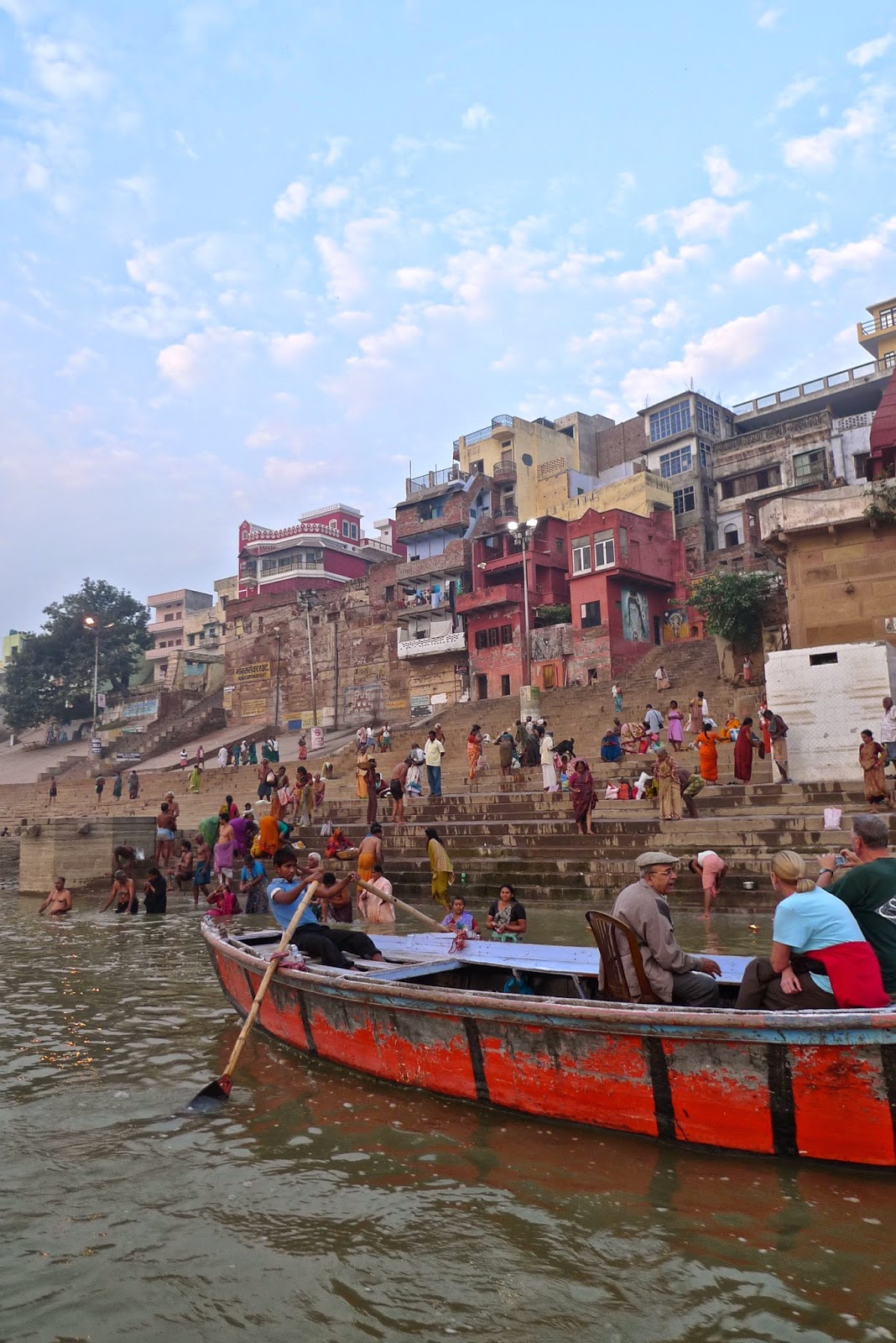 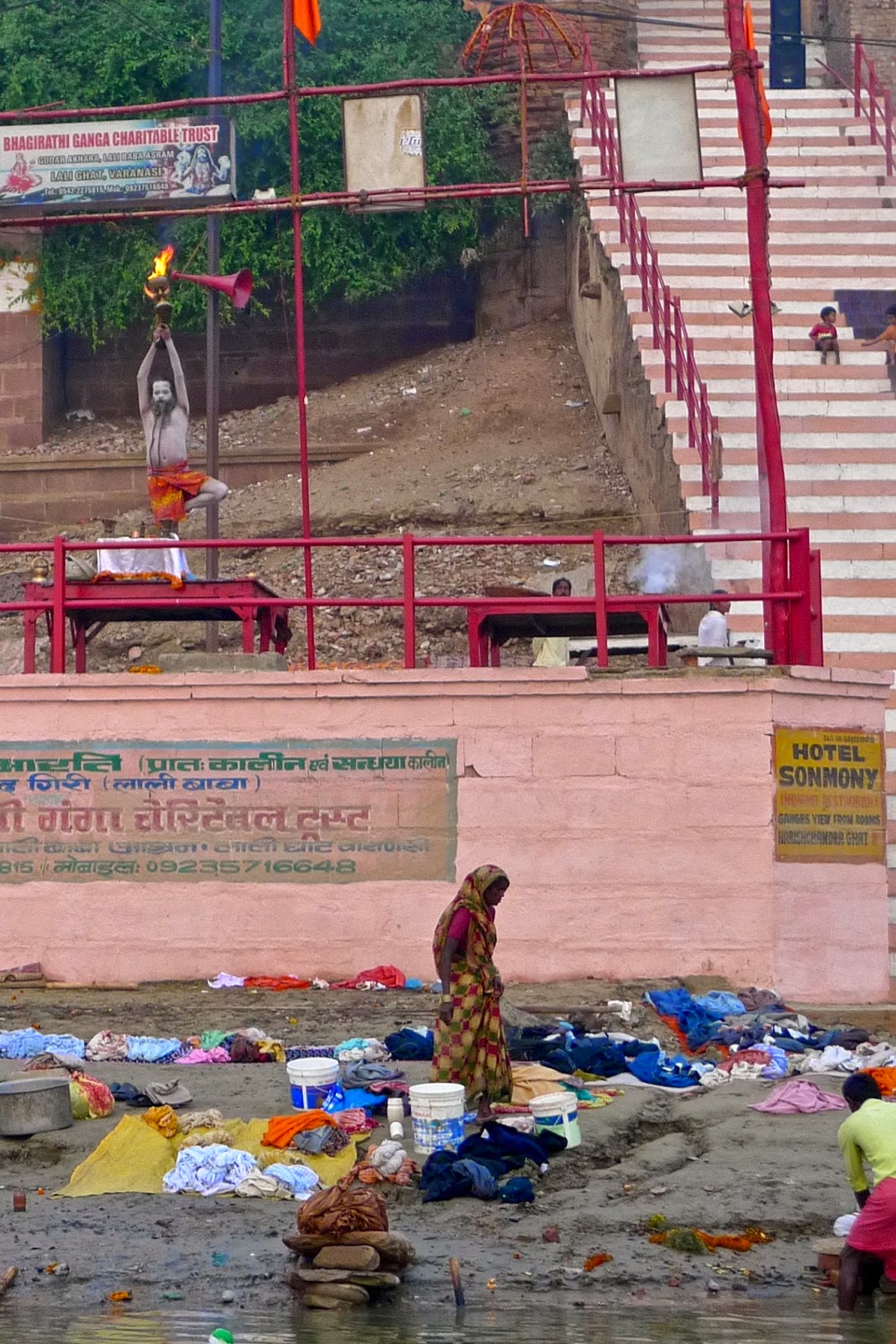 The locals also do their washing on the river and dry their clothes along the steps.

This was an interesting visit which gave me a better understanding of Hinduism and Buddhism, as practiced in India. It appears to me that Hinduism and Christianity may have some tenets of faith in common.