Provence - the Village of the Holy Family, Cotignac, France

Provence is popularly known for the the lavender fields that get posted in social media quite often. The point of geographical reference for Provence, which is in the hinterlands,  is how near it is to the coastal cities of Marseille and Toulon.

Provence is quite distinct in the area of miraculous apparitions, for the Blessed Mother and St. Joseph have both appeared here. For this reason, we made this the focal point of our pilgrimage to this part of France. Our lodging arrangements were at Foyer de Sainte Famille.

It was in August of 1519, on the 10th and 11th of the month, when the Virgin Mary appeared on Mount Verdaille to a logger - Jean de la Baume. She came with the Child Jesus on her arms, along with St. Michael the Archangel and St. Bernard, and gave a message for the logger to deliver: "I am the Virgin Mary. Go and tell the clergy and the Consuls of Cotignac to build me a church on this place in the name of Our Lady of Graces, and that they should come in procession to receive the gifts which I wish to bestow." 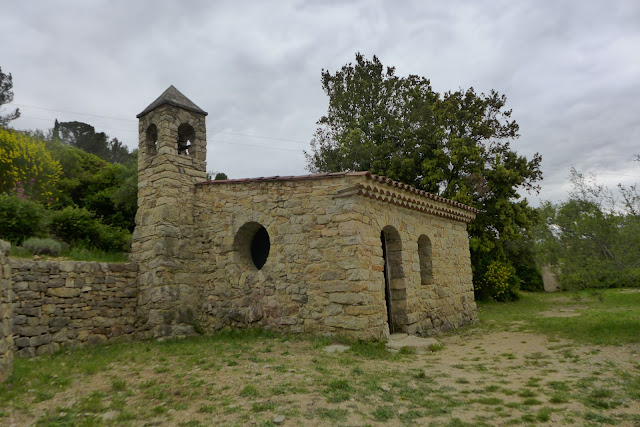 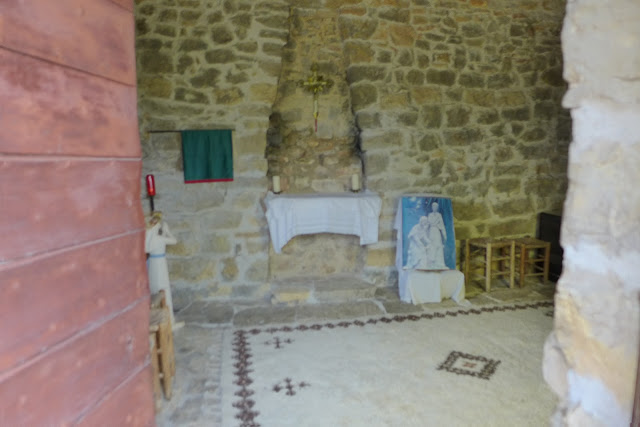 The altar inside the oratoire 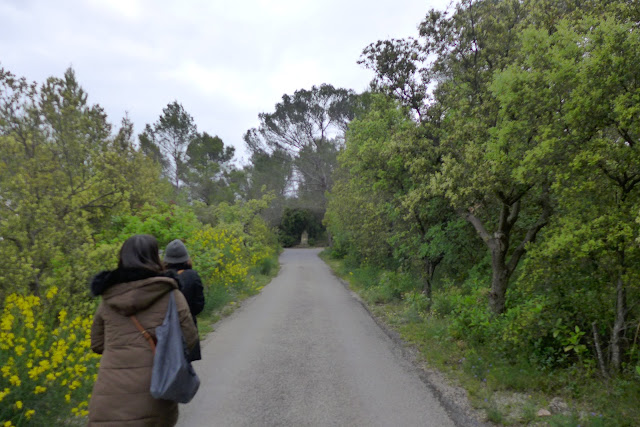 On our way to the sanctuaire (church)...it was an uphill trek. 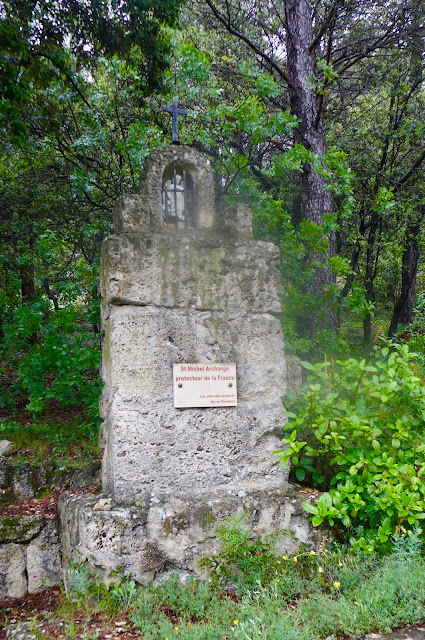 We passed by this stone marker in honor of
"St. Michael the Archangel, Protector of France."

The people of Cotignac were faithful to Our Lady, and were constantly in prayer to her for her intercession. She wanted to shower them with abundant graces and blessings in answer to their prayers. In less than a month after the apparition, the cornerstone for the sanctuary was laid on September 14th on Mount Verdaille, with a procession composed of the clergy, town officials and the local people. 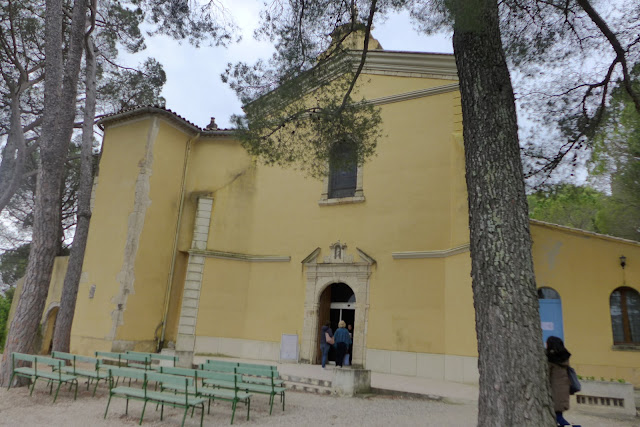 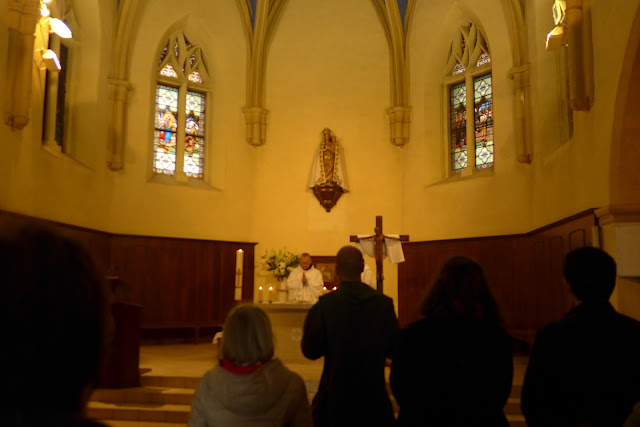 In the middle of the choir (just about where the altar is located) is where the apparition happened. 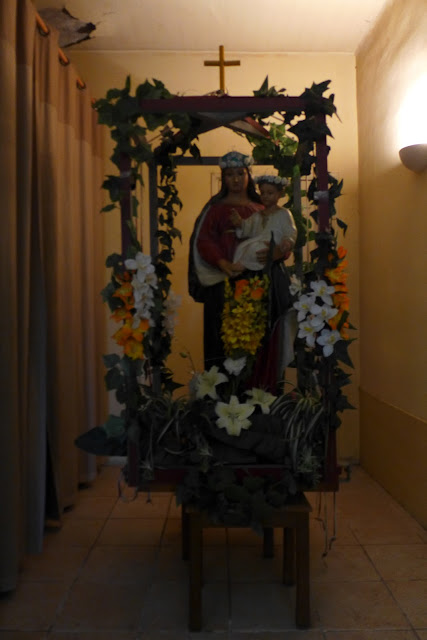 This is the image of Our Lady of Graces that is used when processions are held. 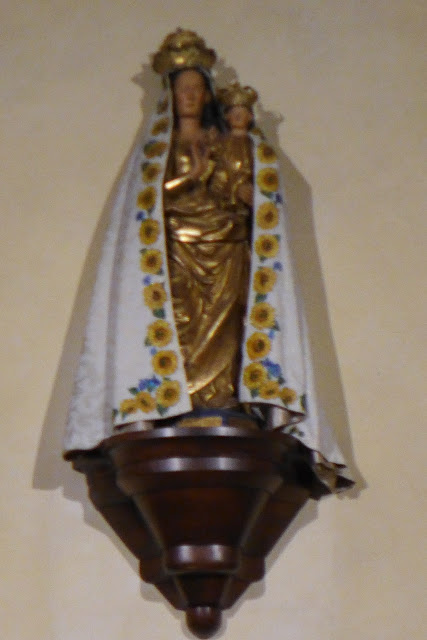 Notre Dame de Grace (Our Lady of Graces)
positioned above on the back wall of the altar. This statue dates back to the 16th century.

On the circular back wall of the altar are two stain glass windows depicting the apparition. 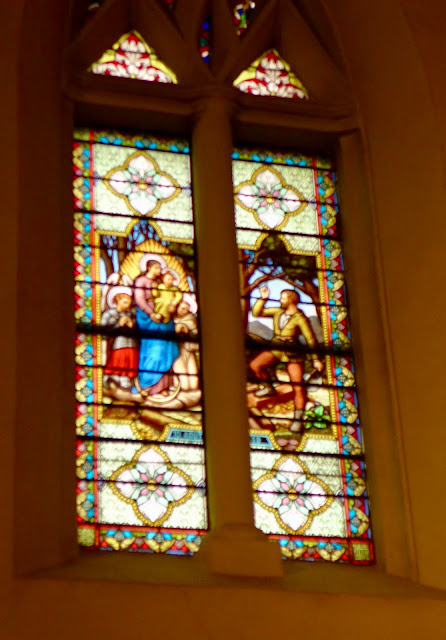 The stain glass on the left side shows the Virgin Mary with the Infant Jesus, Saint Michael the Archangel, and Saint Bernard when she appeared to the logger, Jean de la Baume. 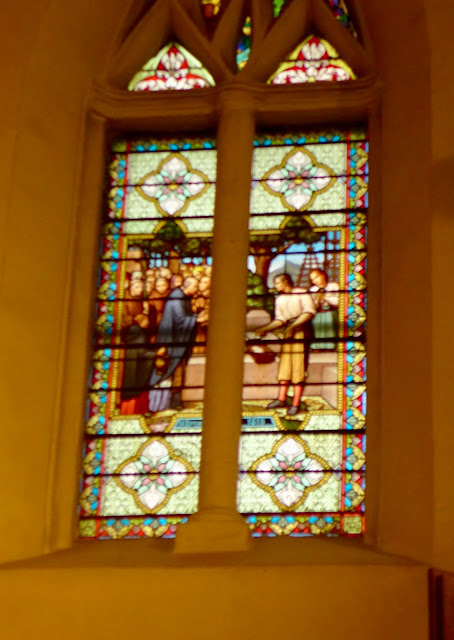 This stain glass to the right of Our Lady of  Graces depicts the time when the logger went to deliver Our Lady's message to the clergy and the local officials. 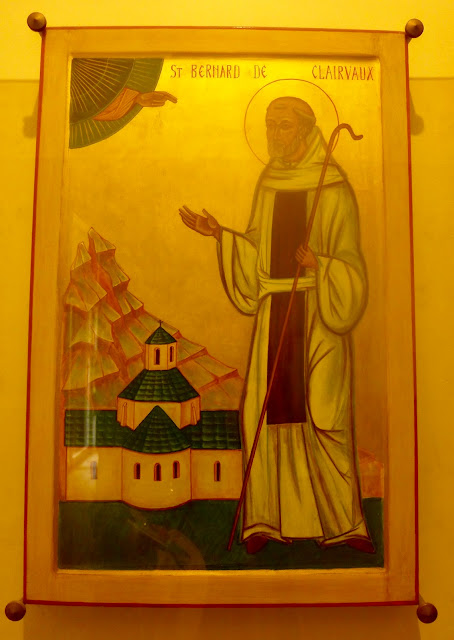 Saint Bernard (1090-20 August 1153) was one of the companions of Our Lady during the apparition. He was a very popular saint among the faithful at that time.

St. Bernard of Clairvaux was a member of the Cistercian order. He was a French abbott who was sent to organize a new abbey in Val d'Absinthe, which was in an isolated area near Bar-sur-Aube. This he did on June 25, 1115. He had named it Claire Vallée, and that evolved into the name Clairvaux. He preached about the faith and brought the people's focus to the Virgin Mary as their intercessor.

He was also involved in resolving the schism after Pope Honorius died on February 13, 1130, as there were two who took over the post - Innocent and Antipope Anacletus II. The resolution came when Anacletus II died on January 25, 1138.

Then, the pope had commissioned St. Bernard to preach the Second Crusade. With the failure of the crusaders, the blame fell on Bernard.


Remember, O most gracious Virgin Mary, that never was it known that any one who fled to thy protection, implored thy help, and sought thy intercession, was left unaided.


Inspired with this confidence, I fly unto thee, O Virgin of virgins, my Mother, to thee I come, before thee I stand sinful and sorrowful.
O Mother of the Word Incarnate, despise not my petitions, but, in thy mercy, hear and answer me.
Amen.


*********
Cotignac and the King of France
King Louis XIII of France and Queen Anne had been married for 22 years and did not have an heir to the throne. This was deemed as a national problem for the country's monarchy.
In October 1637, an Augustinian monk - Friar Fiacre - had three visions of the Virgin Mary. In one of the visions, The Blessed Mother was holding a child who was to be the son of the king and queen. The friar was instructed to pray three novenas to the Blessed Virgin Mary. The first one was to the Norte Dame de Grace in Cotignac, the second to Notre Dame de Paris, and the third to the Norte Dame des Victoires which was the church of his monastery.
The same request was asked by the Virgin Mary for Friar Fiacre to ask of the queen to publicly ask for the novenas to be said. In this vision, on November 3,  Our Lady appeared to the Friar as Notre Dame de Grace. 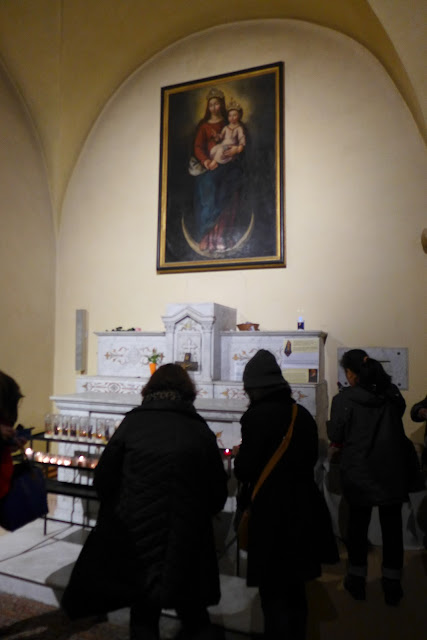 This is the side altar dedicated to Our Lady of Graces. The  image above the altar of Notre Dame de Grace was the one that Brother Fiacre saw in his vision.

At the end of the novenas, a son was born to the king and queen nine months after, and he was called Louis XIV Dieudonne (Godgiven). king Louis XIII consecrated the whole of France to Our Lady in February of 1638.
Let us fast forward now to Young Louis XIV, who became the young king of France. At 22, he was headed to the Spanish border where the Treaty of Pyreneas was going to be signed, and where he was to meet his future wife - the infant Marie Therese. The king planned to stopover at Cotignac.

On February 21st in 1660, Louis XIV came with his mother to give thanks to Our Lady of Graces for his birth. The town had lavishly prepared for this event to welcome the king, and built a route by which the king and his party could go to the church riding their horses and the king's horse-drawn carriage. For this, a special entrance to the church grounds was built. 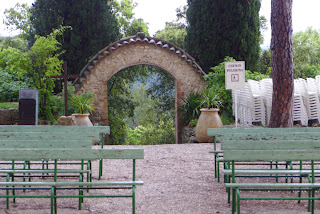 It was  through this gate that the king, his mother, and the royal party dismounted and entered. 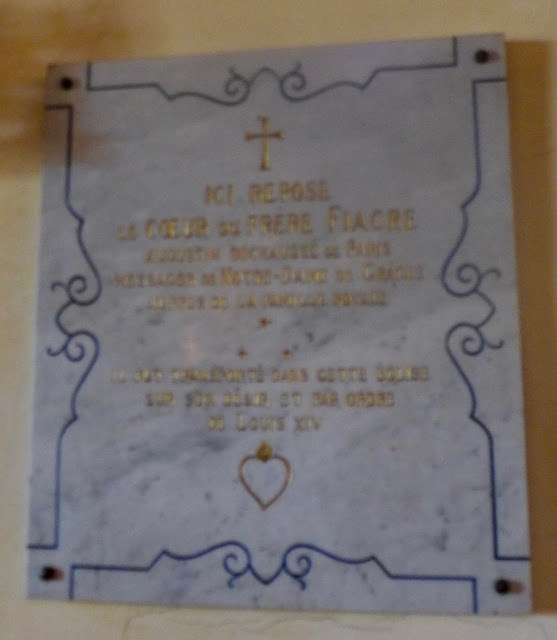 This is the tombstone of Fr. Fiacre on the side wall of the church, next to the side chapel of Notre Dame de Grace. His heart is encased in a box and buried here. 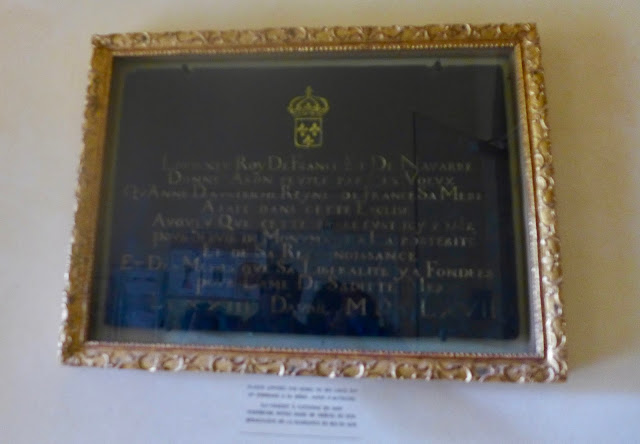 Many religious institutions were destroyed during the French revolution. This church was not exempted. But three young ladies from Cotignac managed to hide the painting,  the statue of Our Lady of Graces, and the box containing the heart of Brother Fiacre.  After the church was rebuilt, the painting, the statue and the heart of Brother Fiacre were reinstalled in the church once again. 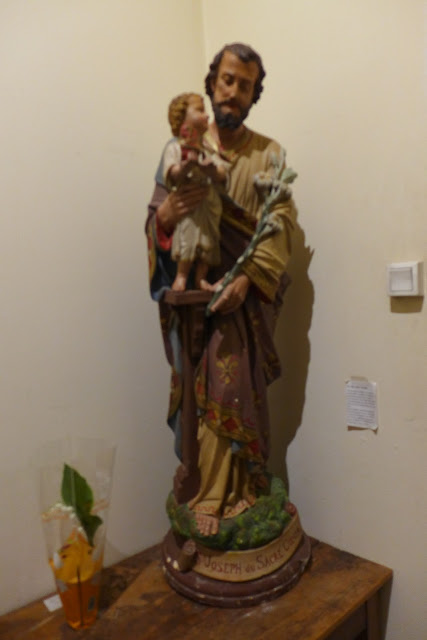 Image of St. Joseph of the Sacred Heart

In another town, one day in June of 1660, not too far from the church of Our Lady of Graces, which was a mere 2 miles away, a young shepherd - Gaspard Richard - along with his sheep, sought refuge from the extreme hot temperature on the hillside of Mount Bessillon. As he lay on the parched ground, a man showed up and instructed him to lift a big stone so he could have a drink of water. He simply identified himself " I am Joseph." A stream appeared under the rock. When Gaspard had his drink, he turned around to thank the man, but the man had disappeared.
Gaspard ran down and easily convinced the people of the town about what had happened. It was a big boulder that he had lifted - which would have probably taken, at least, 8 men to move it. The stream was now running down the rocky hillside. His vision was quickly approved and devotion to St. Joseph spread in the little town. A chapel was built on the site of where the spring flowed, then a church and a monastery followed.

In 1661, King Louis XIV declared  March 19, the feast of St. Joseph, as a national day of celebration as he consecrated his kingdom to St. Joseph. 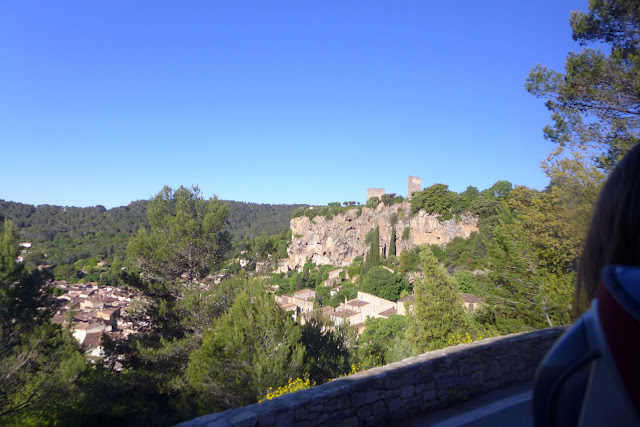 The view from the road, as we rode to Mount Bessillon 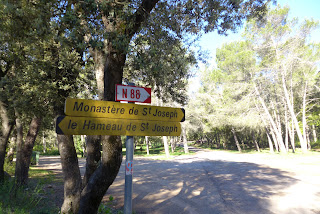 On foot, it was a long and uphill trek to the monastery from the main road. Then, our tour bus chauffeur was inspired to drive up to pick us up on our way down. 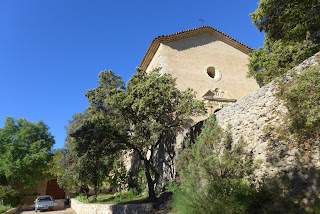 The site of the stream is on the left side of the church, towards the back, in front of the monastery. 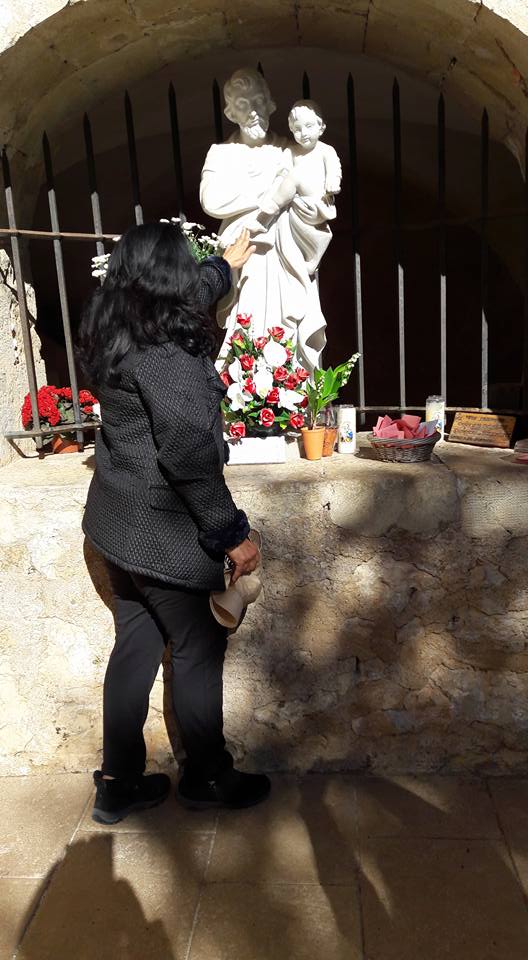 The stream is fenced off by the metal grill, behind this statue of St. Joseph with the Child Jesus. 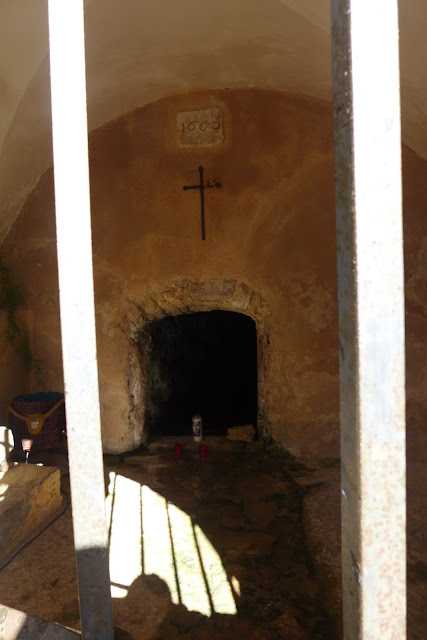 The original source of the water started from here...and now flows through the pipe... 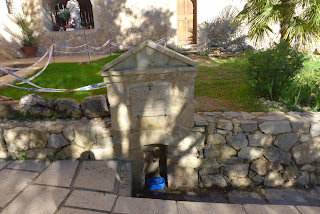 ...to a faucet from which pilgrims are able to fill up their bottles with the healing water .


Today, the stream continues to flow and many miracles have been attributed to the healing waters of Mount Bessillon. 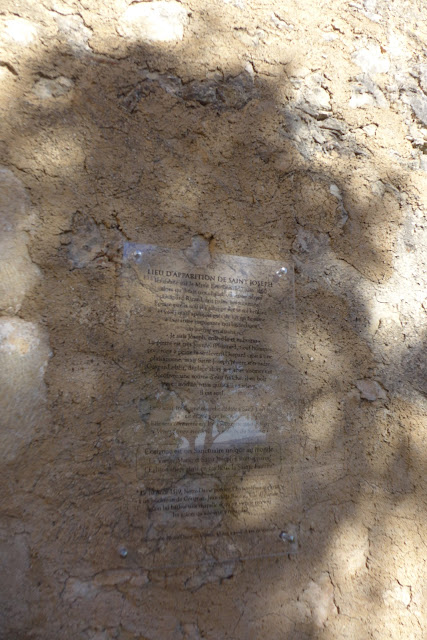 A plaque on the wall about the narrative of
St. Joseph's apparition, in French 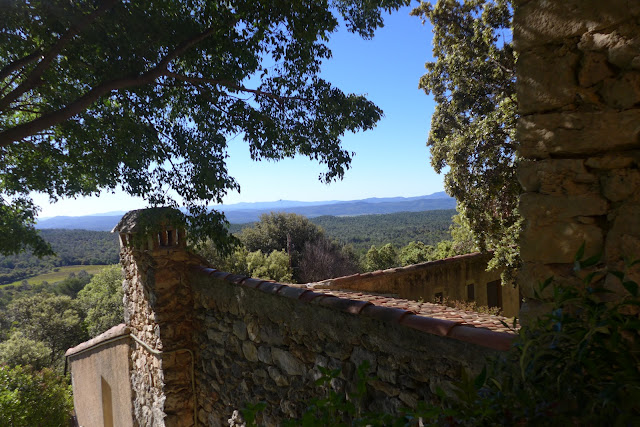 The view from the corner, outside the monastery. 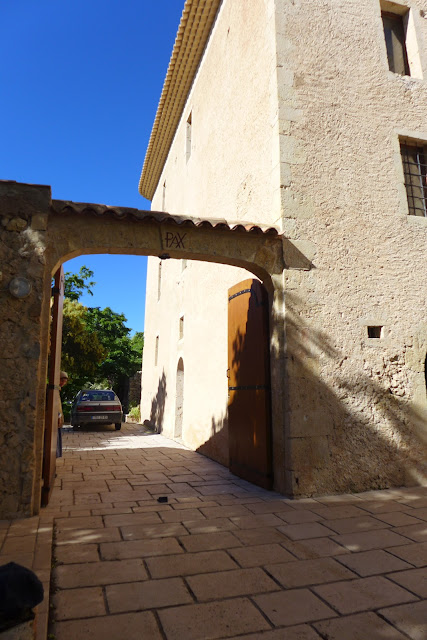 A quick view of the driveway into the monastery as a car full of nuns arrived, after they voted during the French presidential election.

After the French Revolution, the monastery, the church, and the chapel were abandoned and were in disrepair. After two centuries, in 1977, fourteen Benedictine nuns from Algeria arrived in search of a new place for their contemplative life after being expelled from their monastery - St. Benoît of Médéa. A well-known architect, Fernand Pouillon, offered his services for free to rebuild the monastery. 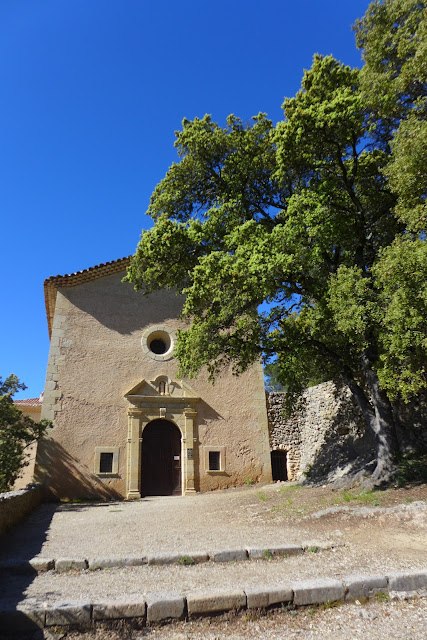 The Benedictine nuns follow the rule of St. Benedict, seeking to please God alone in their monastic lifestyle, "living the divine office publicly seven times a day, and once before dawn, the nuns are the voice of the church as Bride of Christ, who is continuously praising her Lord and interceding for the salvation of the world." The focus of their day is the Mass at 11:00 a.m., which is celebrated and sung in Latin and Gregorian chant. 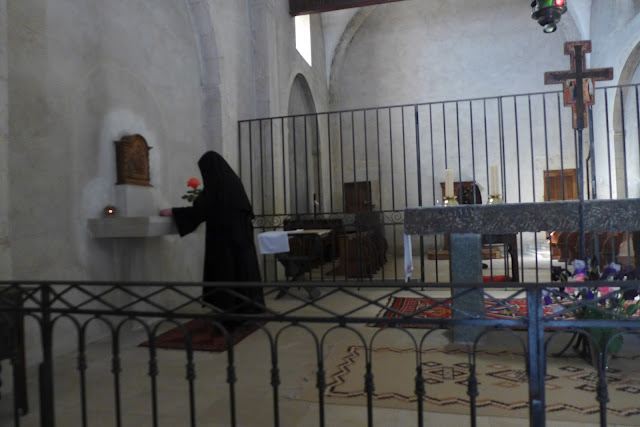 A nun is preparing for the celebration of the mass. 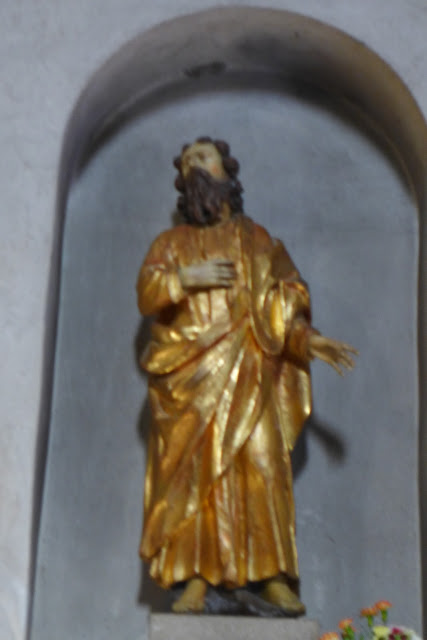 The statue of St. Joseph in the church

The nuns live a simple  and sober life "where sisterly love and mutual dependence are pursued, seeking to develop all the gifts of grace received at baptism." Their monastic life is under the maternal leadership of an Abbess or Prioress who is elected with a life term. It is a life of "obedience, humility, silence, mutual service, prayer, work, and recreation."

Guests are welcome here to go on retreat from the world.