At the Centennial Celebration in Fatima, Portugal

May 12th and 13th in 2017 were days dedicated to the centennial celebration of the first apparition of Our Lady  of Fatima, in Portugal. It was a grand celebration attended by about a million people, and millions more who joined in the prayerful celebration as they got to view it via satellite. And by the grace of God, I happened to be one of the pilgrims who came for this momentous event, along with my sister-in-law, my nephew, and a friend I had met when I went on a pilgrimage to Garabandal last April 3 - 17, 2017.

The Blessed Virgin Mary had appeared a total of 6 times to three shepherds - Lucia, Francisco, and Jacinta on every 13th of the month from May to October in 1917. The small village of Fatima, which is 90 miles north of Lisbon, was under government persecution. But she had remained faithful to the Catholic Church. Her message for mankind was a promise - that peace would reign in the world and many souls were going to heaven if her messages were listened to and obeyed.  She had indicated that God punishes man's sinfulness by means of wars, hunger, persecution of the Church and the pope. Her message was a prophesy of what was to transpire in the 20th century and in the near future.

Our Lady had promised a miracle as a sign that the messages she gave at Fatima were from God. On October 13,  1917, about 70,000 people witnessed the miracle on the day the sun danced. The believers and non-believers who came stared at the phenomenon and did not suffer eye damage. Because of her great love for all Her children.

Our Lady of Fatima continues to work miracles through the Fatima water which sprung from the spot in Fatima where the bishop  told the people to dig, near the place of apparition at the Cova de Iria (Cove of Peace). Many claims of healing continue to be recorded through the healing water of Fatima, while others are healed when they go there on a pilgrimage. 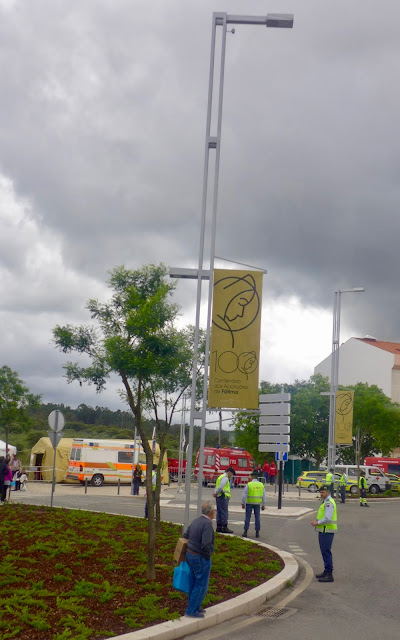 Banners of the centennial celebration were hung on the street-lamp poles in Fatima Cova d'Iria.

Sightseeing was not part of the schedule for us, pilgrims, as we came mainly to celebrate this special occasion. The program of activities were listed and posted and the people always made it a point to be  well ahead of time to find a spot for the major events. The first one was the arrival of the Pope Francis at the Monte Real airbase, at 4:30 p.m. on May 12. His plane touched down at 4:10 and the people were awaiting for him to pass the route that would take him to his home for the night, in the shrine complex. 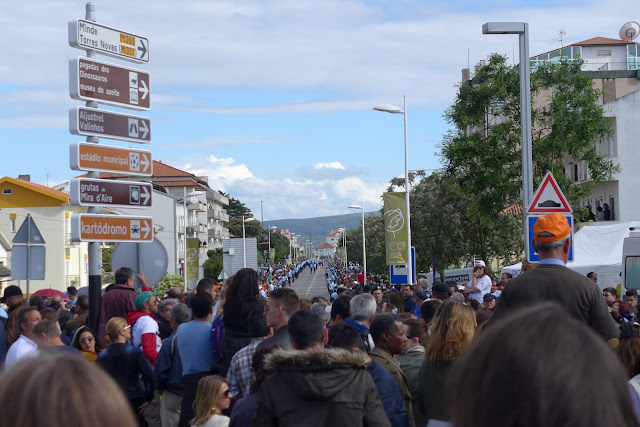 The street route was heavily secured with officers.
The pilgrims were in place to welcome the Pope as early as three hours before. 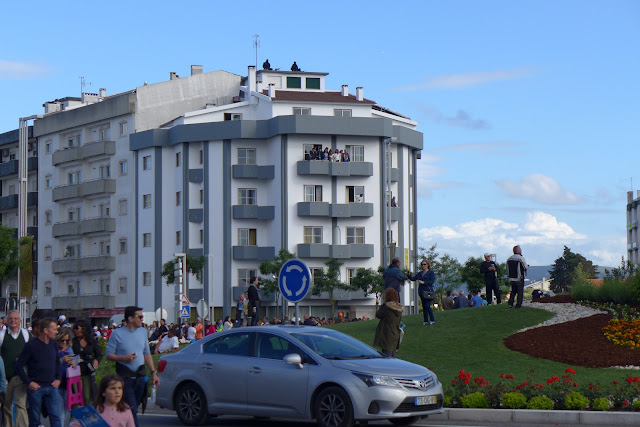 Marksmen in black, with their arms drawn, were positioned atop the surrounding buildings. 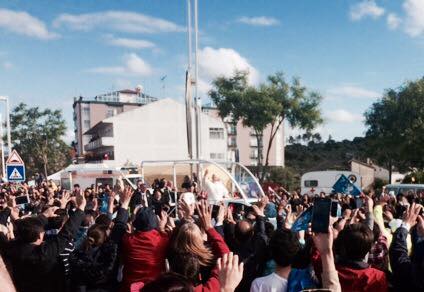 And as Pope Francis passed by, the crowd burst out into a loud applause and waived at him as he waived, and smartphones were out to capture the moment.

In a couple of minutes, it was over and the next event on the agenda was the blessings of the candles and the rosary prayer at the main shrine. We had time to have dinner and by 7:00 p.m. we were looking for our places among the crowd that had already gathered 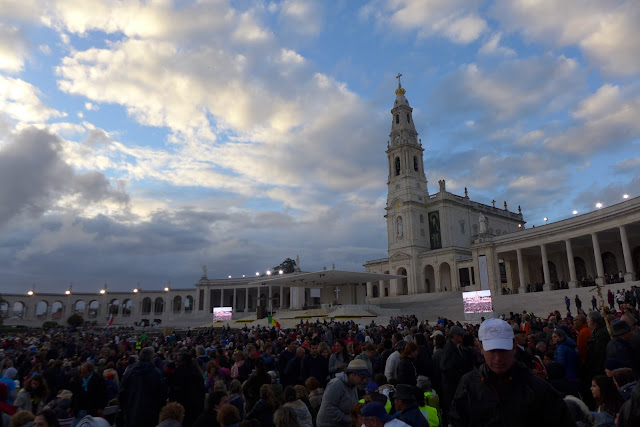 And, we thought we were early! We managed to inch our way and found our places where we set down our mini chairs which we bought for 5 euros each. 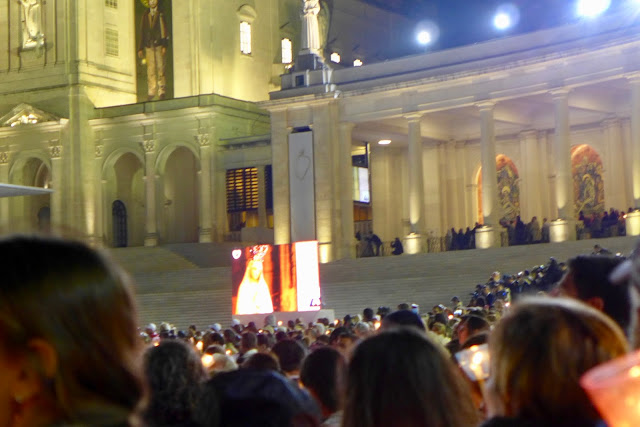 The choir (on the right side) performed and graced the solemnity of the occasion. 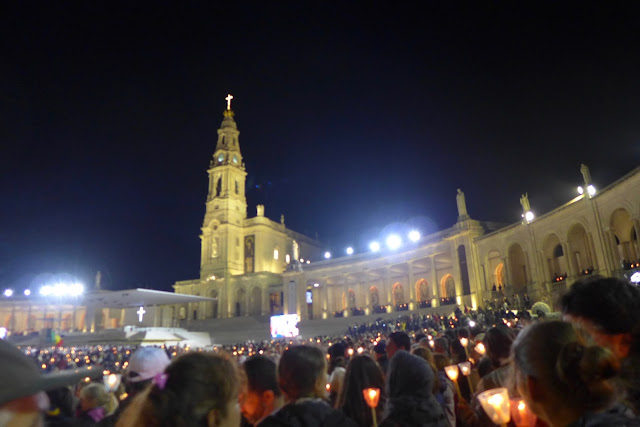 The blessing of the candles at 9:00 in the evening of May 12th, commenced the centennial celebration. 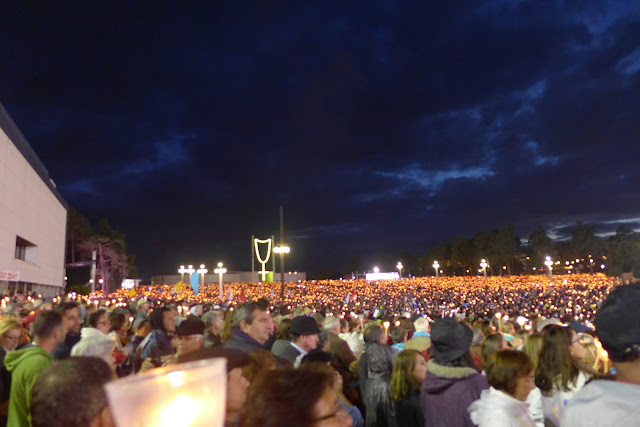 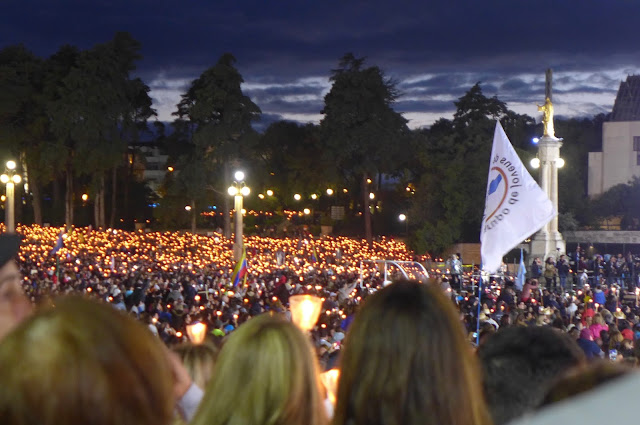 A sea of lit-up candles welcomed the pope, then Our Lady of Fatima. 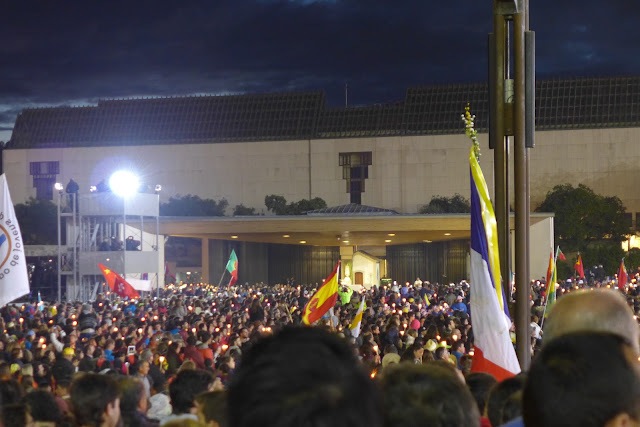 Pope Francis gave his welcome address from the Chapel of the Apparitions... 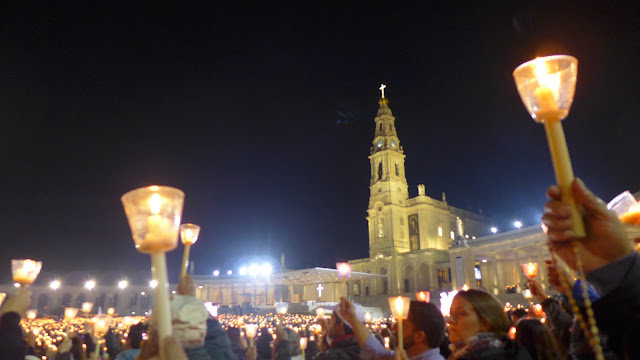 ...followed by the recitation of the holy rosary in different languages. 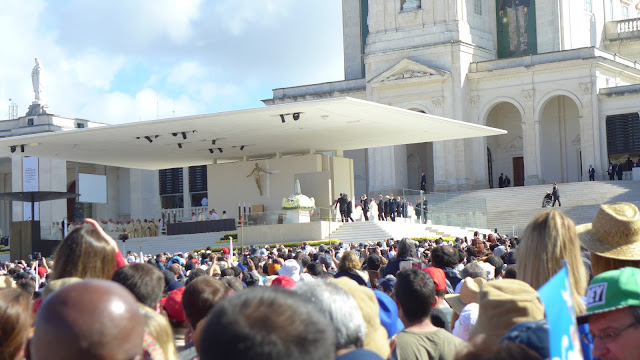 May 13th - a centennial mass celebration and the canonization of the two visionaries, Francisco and Jacinta, were held from 9:00 a.m. to a little past noontime, at the outdoor altar in the foreground of the Basilica and Sanctuary of the Rosary (Basilica of Our Lady of Fatima).

One of the most poignant moments for me was when I lifted all of my family members, friends and their  families during the "prayers for the faithful" portion of the centennial celebration mass , reciting all their names one by one. Then, I entrusted my 7-page list with all the names to Our Lady of Fatima at the Chapel of the Apparitions.

Members of the SWAT team were stationed abovthe bell tower and all around the shrine. 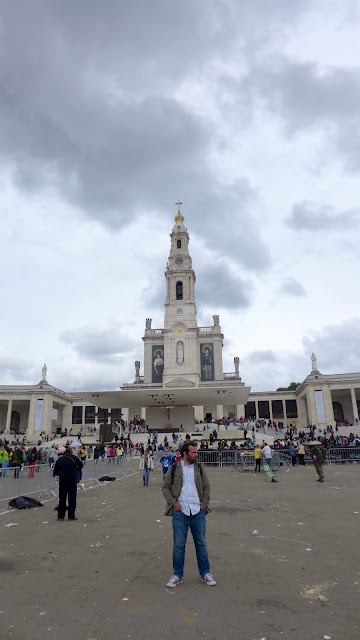 The pictures of the newly canonized saints hung on the basilica's facade. 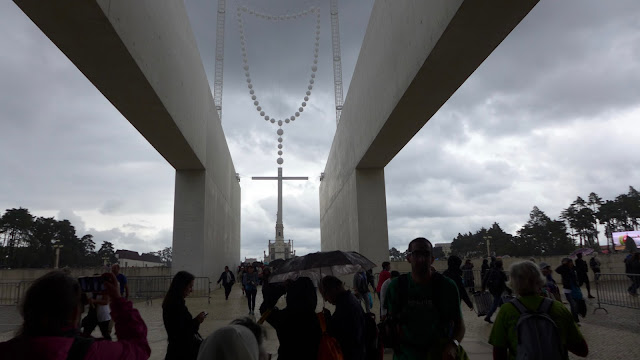 Caught in a heavy downpour, we had seek shelter opposite the basilica,  by the entrance to the Basilica of the Holy Trinity.

In preparation for this day, I prayed and asked for a sign from Our Lady of Fatima. And she did give us all present there a sign. The weather forecast was for rain that day, as you can see from the ominous clouds in my picture. As soon as the mass began, the sun came out and the day warmed up. By the time the shrine cleared out after the mass, heavy rain poured on and off for the rest of the afternoon.

On the 64th anniversary of the apparition of Our Lady of Fatima, St. John Paul II, who was the pope then, referred to the message of Fatima as "more relevant and more urgent" and it was "an anguished appeal of our Heavenly Mother, who sees us in great danger and Who comes to offer Her help and advice."

Now in 2017, we were reminded, once again, to look back at the messages the Blessed Mother left us at Fatima, the so-called secrets of Fatima. There is an urgency now to listen to what She had said. The first 2 secrets had been revealed and are in the past. With regards to the third secret, this is what Joseph Cardinal Ratzinger, the Prefect for the Congregation for the Doctrine of Faith under Pope John Paul II, had to say: