The Cagsawa Ruins and Daraga Church in Albay, Bicol, Philippines

The Cagsawa Church was originally built by the Franciscan friars, under the leadership of Saint Pedro Bautista in 1587, during the Spanish occupation of the Philippines. San Pedro Bautista was the first bishop of Nueva Caceres (Naga).

A note about San Pedro Bautista...he arrived in the Philippines from Spain in 1584, as part of the fourth wave of missionaries to the country.  His first assignment was in Intramuros, where he also ministered to the Japanese living outside of Intramuros, and with the help of Fray Gonzalo Garcia, they organized the Filipinos into "town settlements."

In 1586, he was transferred to become the parish priest in Lumban, Laguna. There he taught church music and the making of musical instruments.

In 1590, he established the Franciscan novitiate in San Francisco del Monte.

He discovered the medical attributes of the hot springs in Los Baños. He defended the basic human rights of the indigenous people in Zambales, inculcating in the minds of the people the value of human life.

in1593, he became the Philippine ambassador to Japan, where he, successfully, averted the emperor's plans to invade the Philippines. He settled in Miyako along with his companions, then moved to Nagasaki where they established hospitals and churches. The emperor began to persecute Christians in 1596, and San Pedro Bautista was among the twenty-six Christians -  four Spaniards, one Mexican,  who were all Franciscan missionaries; three Japanese Jesuits;  seventeen Japanese laymen; and three young men who were members of the Third Order of St. Francis - who were crucified and speared to death on February 5, 1597 in Nagasaki. The Martyrs of Japan were canonized by Pope Pius IX on June 8, 1862. They are listed in the calendar of saints as Sts. Paul Miki and his Companions, and commemorated on either February 5th, 6th, or 13th by different Christian denominations. 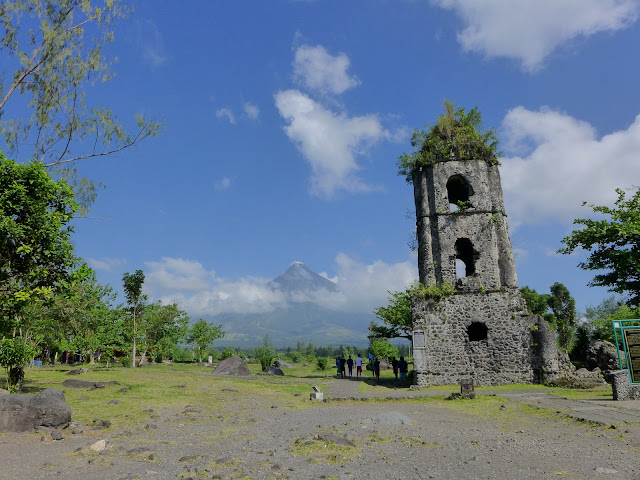 This image has become so famous as it is used in posters to promote tourism in the Bicol region.

The architecture of this Franciscan designed church had one belfry, with a convent attached to the church, along with some patron and venerated saints like San Francisco, San Antonio, San Pascual Baylon, San Buenaventura, Nuestra Señora de los Angeles and more, in the interior of the church.

The church was rebuilt in 1724 by Fr. Francisco Blanco, after the original church was burned down by the Dutch in 1636, when they attempted to invade the Philippines during her Eighty Years War with Spain that began in the 1500s.


On February 1, 1814, Mayon Volcano became active, which turned out to be a deadly eruption. The church was destroyed and about 2000 inhabitants from the surrounding areas were killed when they went to the Church to seek shelter and protection from the volcanic eruption, as the dense mass of very hot ash and lava, along with explosive gasses from the volcano flowed down  at a very fast speed.

Though, the church facade survived, several volcanic eruptions almost leveled it to the ground in the 1950s. What remains today is the bell tower and some parts of the convent, with an imposing background of Mayon Volcano. 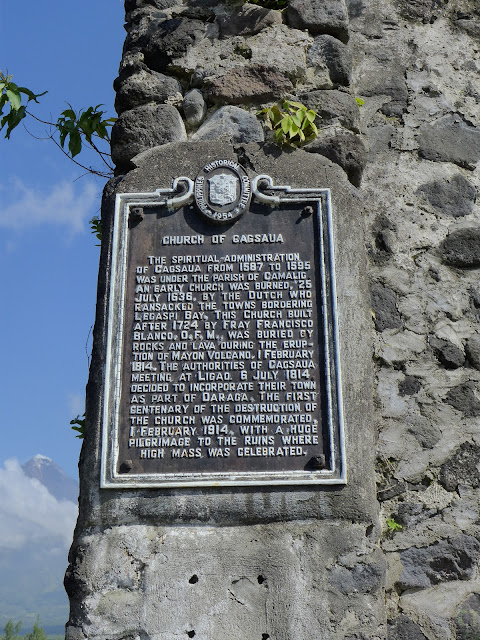 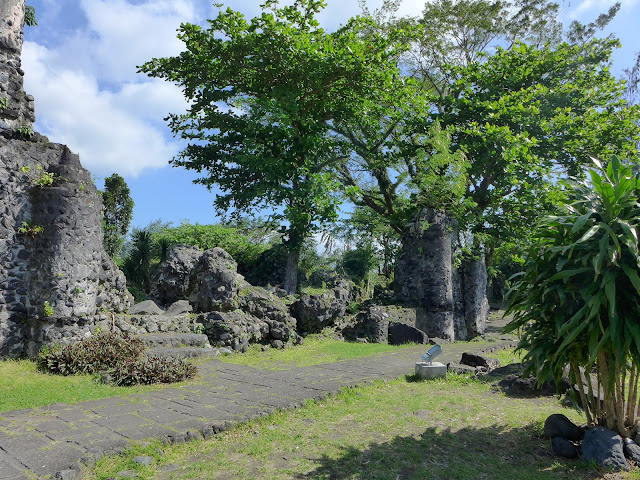 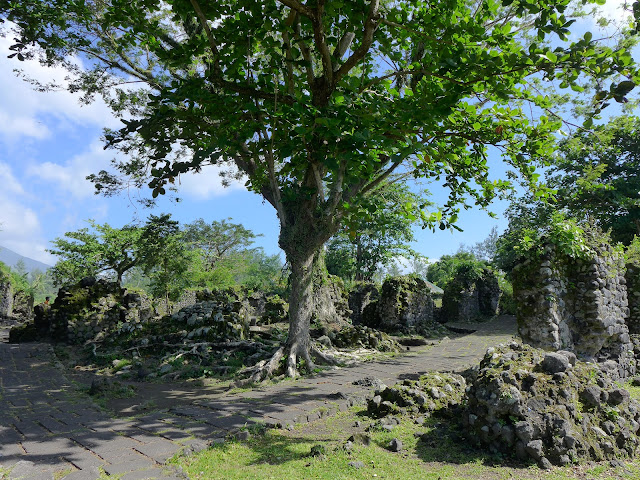 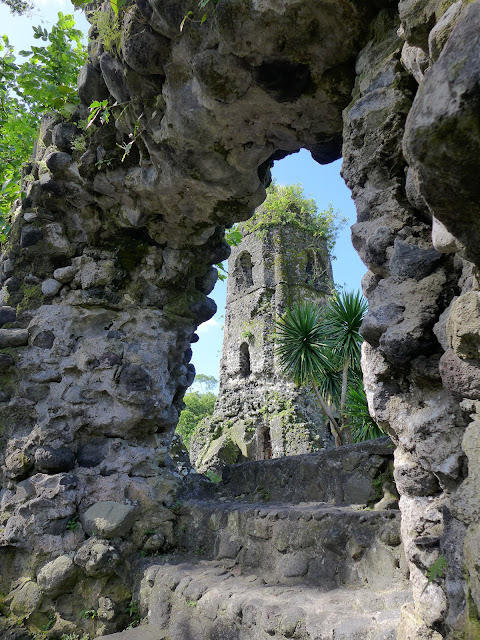 What was once the Cagsawa church, is now known as the Cagsawa Ruins Park, in Barangay Busay, in the municipality of Daraga, Albay, in the Bicol Region.

The park is the site of the Cagsawa branch of the National Museum of the Philippines, where geological and archeological exhibits and pictures document the history of the volcanic eruptions. 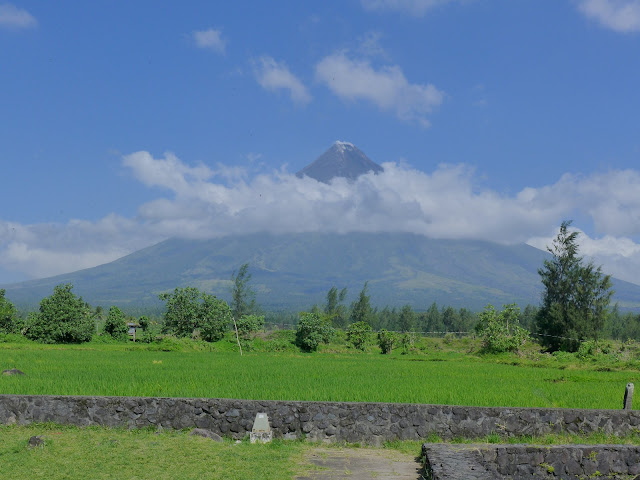 Mayon Volcano at midmorning, with a ring of cloud formation that appears after 7:00 in the morning. 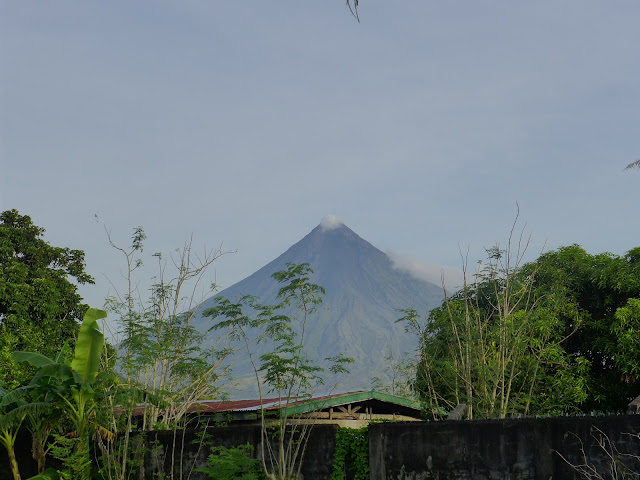 This is a view of Mayon Volcano early in the morning, with a noticeable smokestack, which we discovered during an early-morning walk near our hotel.


In July of 1814, the local officials decided to incorporate their town with Daraga. Thus, the local townspeople had another place of worship to go to - the Daraga Church. 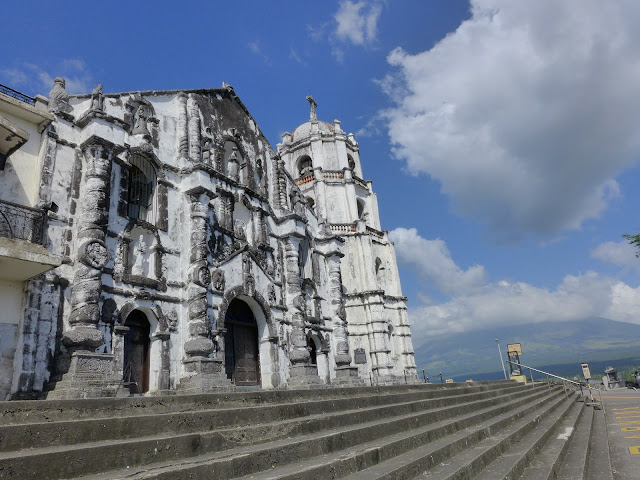 Daraga Church - Our Lady of the Gate Church 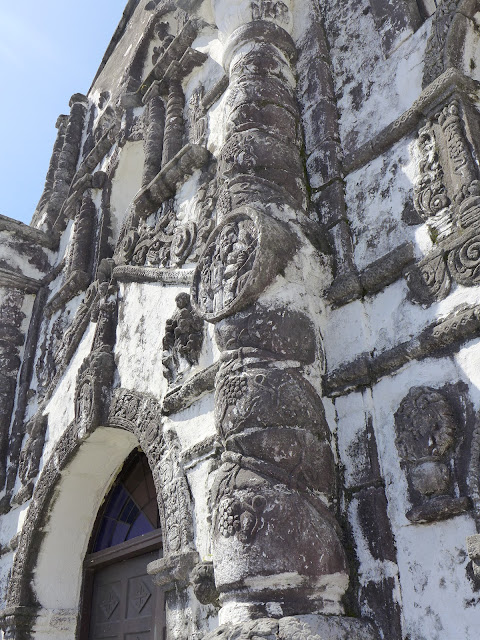 The church is distinguished by its striking facade, with elaborate Baroque elements. The architecture features "solomonic columns, flowing cornices, and bas-relief images of saints and religious seals carefully carved through the entire face of the church."

It was built atop a hill by the Franciscan Friars in 1773, with the use of volcanic rocks. A coating of lime has been painted on the volcanic bricks to protect them from the elements. 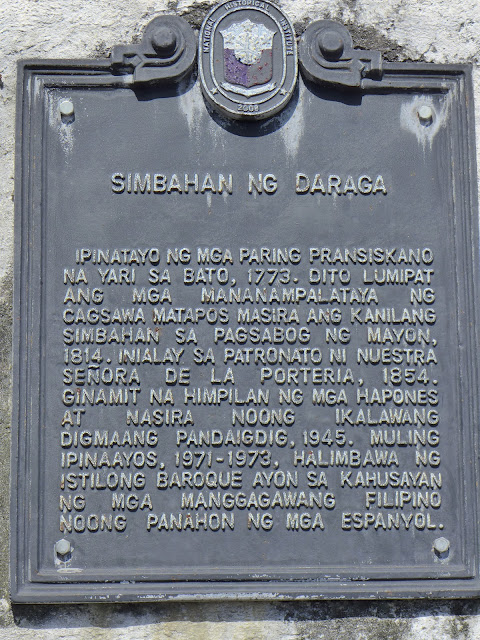 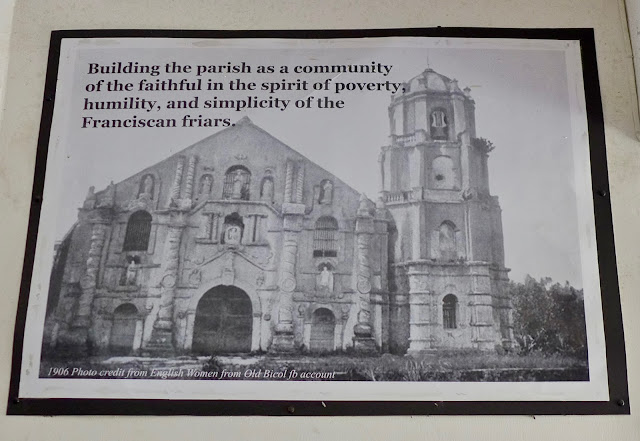 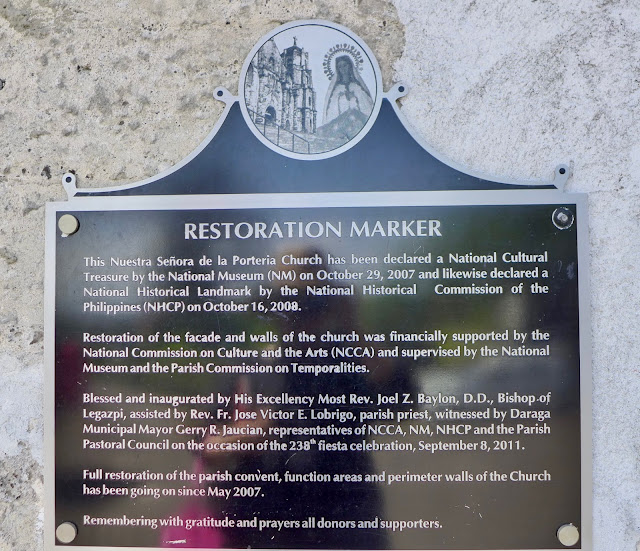 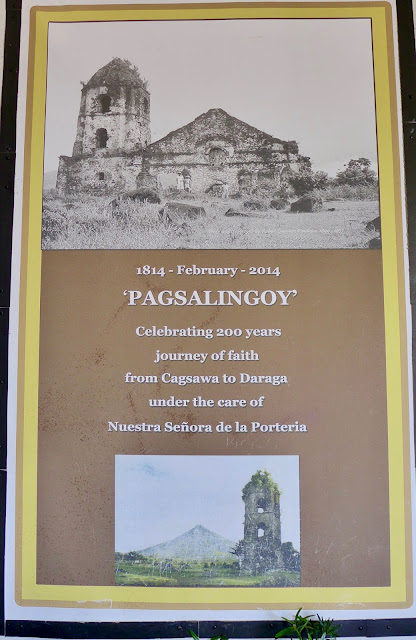 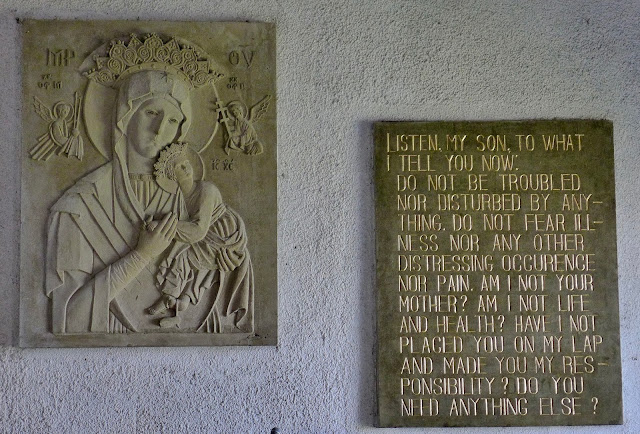 A message from Our blessed Mother... 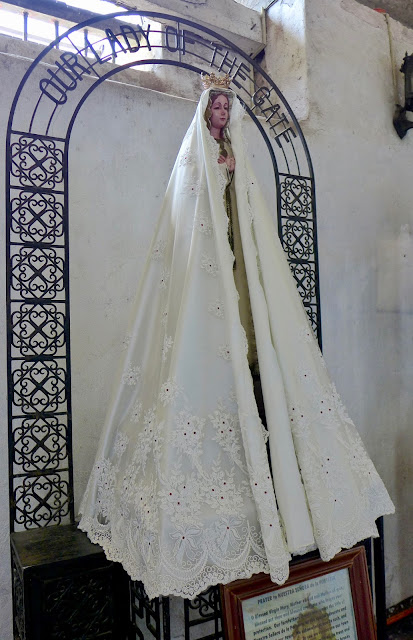 Nuestra Señora de la Portería
(Our Lady of the Gate) 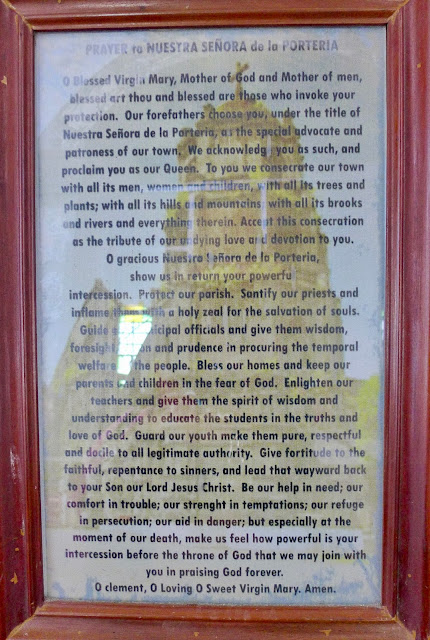 A prayer to Our Lady of the Gate 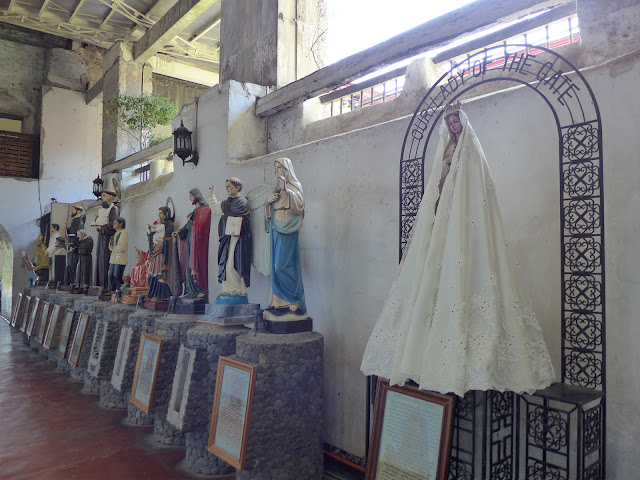 The other venerated saints 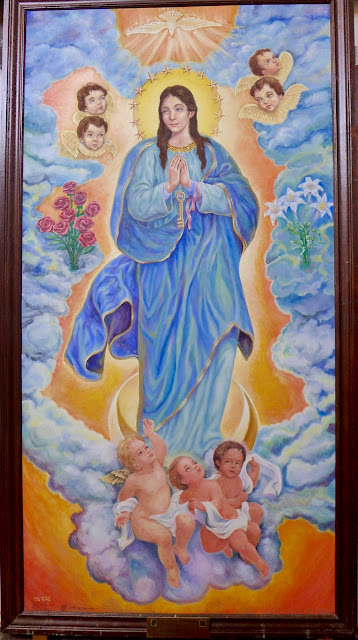 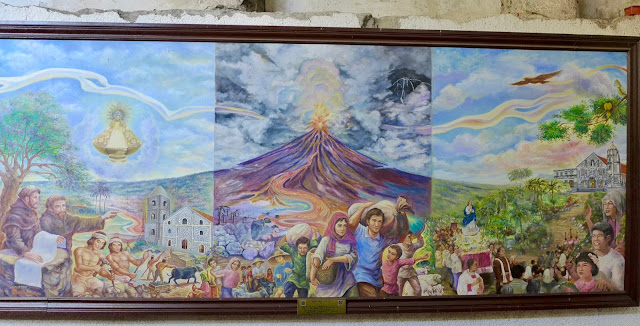 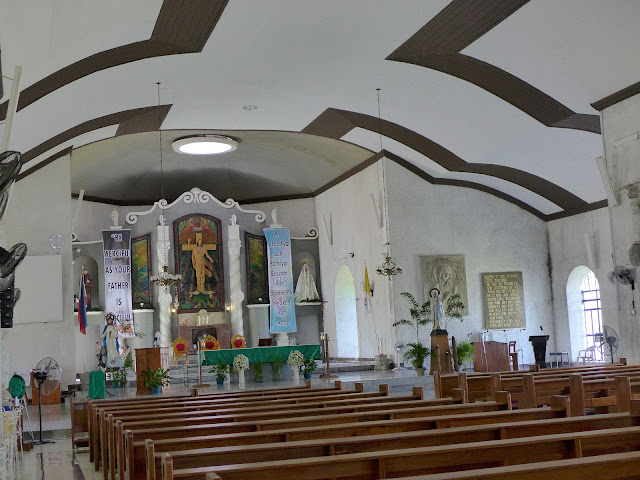 The Cagsawa Ruins (also referred to as Kagsawa, Cagsaua) has become one of the iconic places to visit in Albay. From there, it is but natural to continue on to the Daraga Church, to continue the story of the plight of the people as a result of the fiery temperament of Mayon Volcano.