After our visit to Plaza de España, we went back to where we had started our walking tour of Seville, at the plaza in front of the cathedral and the tower. 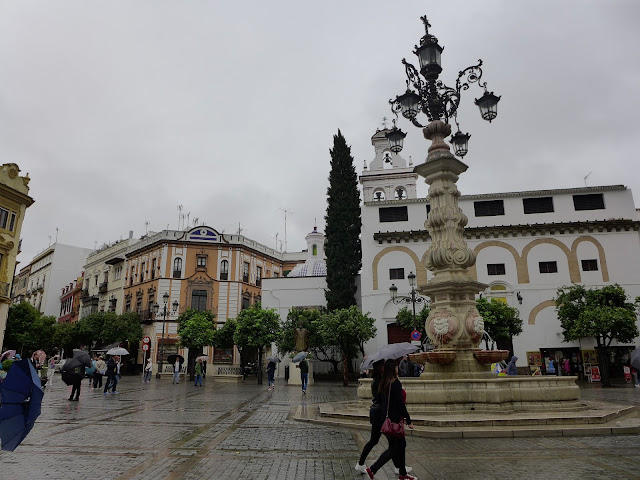 The La Giralda tower is not to be missed, while visiting Seville, Spain. At the top, it is a lovely, panoramic view of historic Sevilla.  La Giralda is one of the iconic landmarks  that rises to a height of 103 meters. 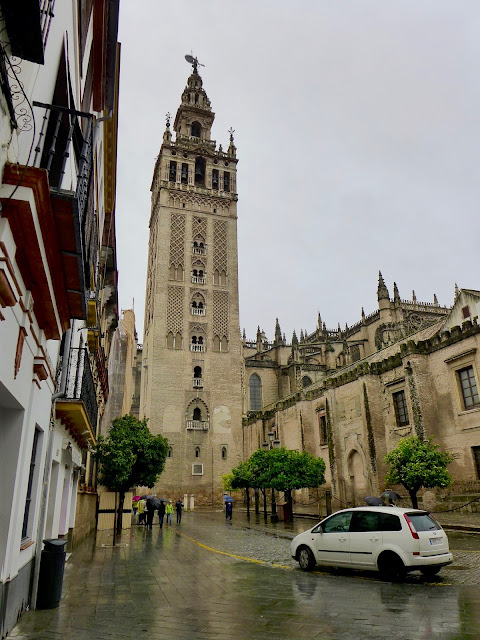 La Giralda was the minaret of the Alijama mosque that was built in 1195, used to call the faithful to prayer. It was significant in the Islamic faith and was given much importance by the Moorish rulers.  The completion of this tower took twelve years. It is is an example of Almohad architecture, which took hold in Seville after the reconquest of the city by King Alfonso X in 1248. The Moorish rulers wanted to destroy it rather than have it be used as part in the practice of another faith, but they were threatened to death by the king should any attempt be made to take even just one stone. Thus, it was eventually turned into the bell tower  of the Cathedral of Seville.

It takes its name from the Spanish word girar - to turn. Giralda means "she who turns." At the top of the tower was a weather vane of El Geraldillo - representing faith in the four corners of the world. 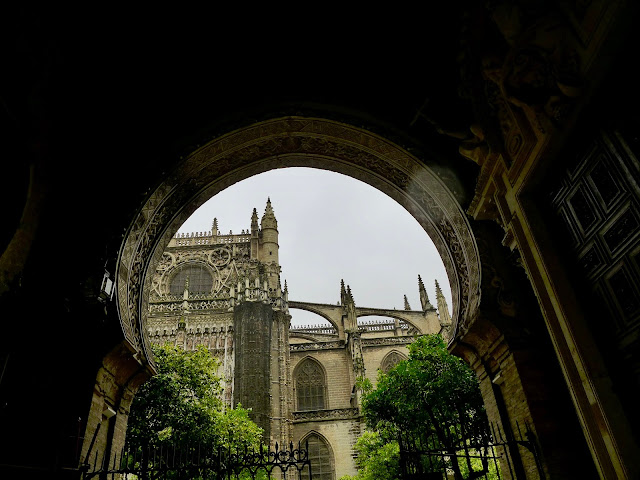 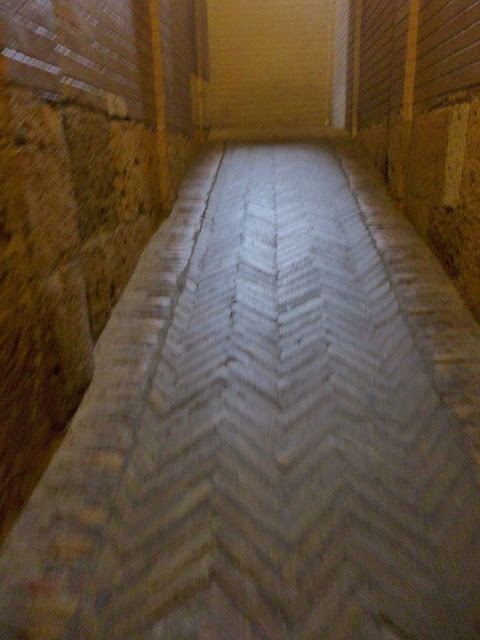 We dared to climb the tower and it turned out to be worth it.  It was a climb that involved going up 35 inclines with ramps. This was used by the muezzins - the guards who went up to the top, two at a time, riding their horses or donkeys to call the faithful people to prayer.

ON OUR WAY TO THE TOP
Looking out the windows 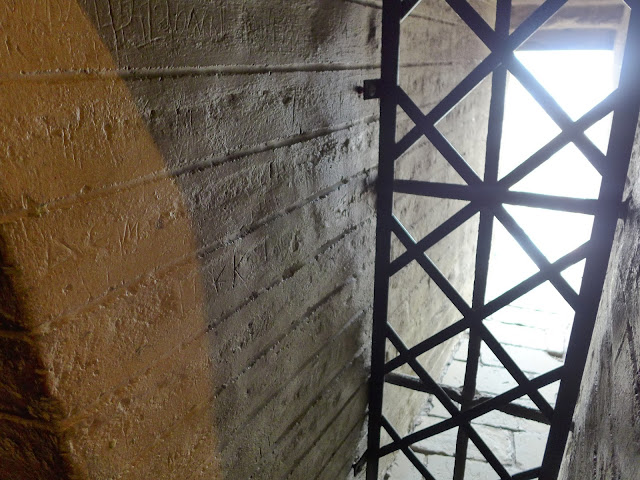 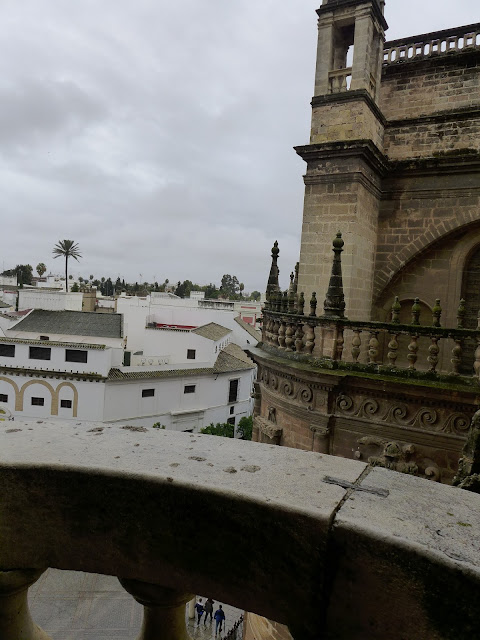 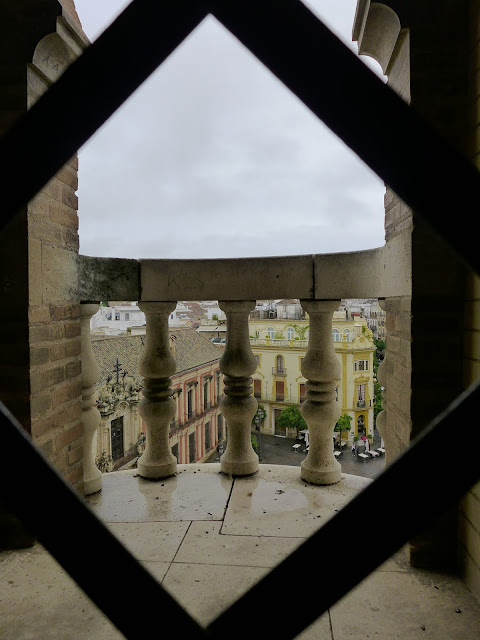 The tower was built with red bricks, with beautiful trellis designs forming the windows with a series of arched niches. Each side of the tower showcased a different trellis design. In the original design as a minaret, the tower was crowned with four copper balls and topped with a crescent moon. In the mid-14th century, an earthquake destroyed part of the tower and it was restored with a bell tower and a cross.

The tower was consecrated as a Christian church in 1248 and used as a cathedral until it was restructured to be the tower next to the construction of the cathedral of Seville. In the back are the leaves of a 14th century door that is believed to have been part of the Sagrario Chapel, with Gothic writing and verses from the Qur'an. 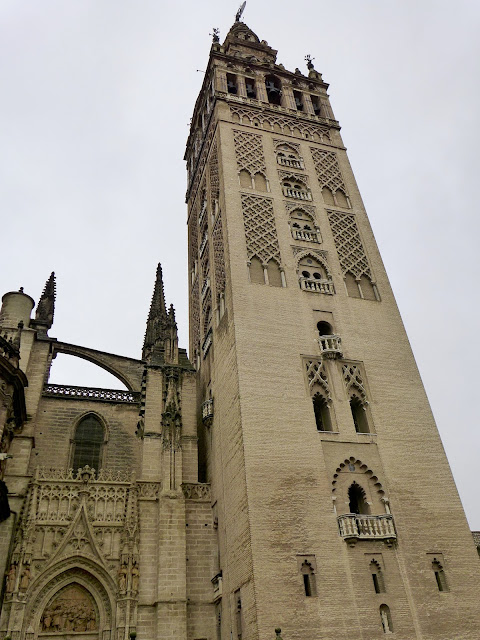 In the 16th century, the upper portion of the bell tower was renovated to four-storeys, with a weather vane on the top. 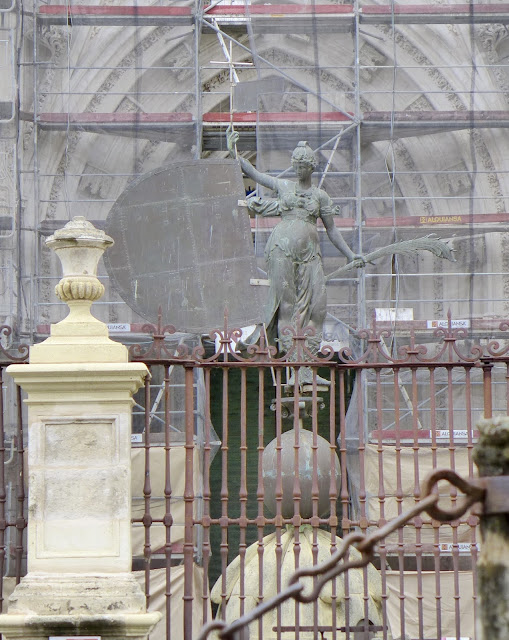 The finished structure was a blend of Moorish and Renaissance architecture. 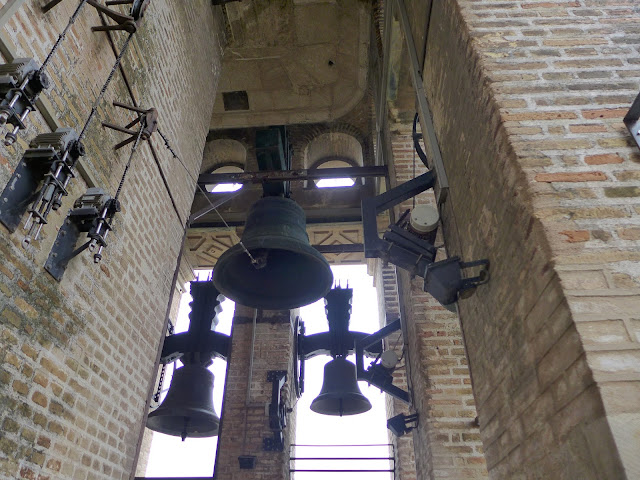 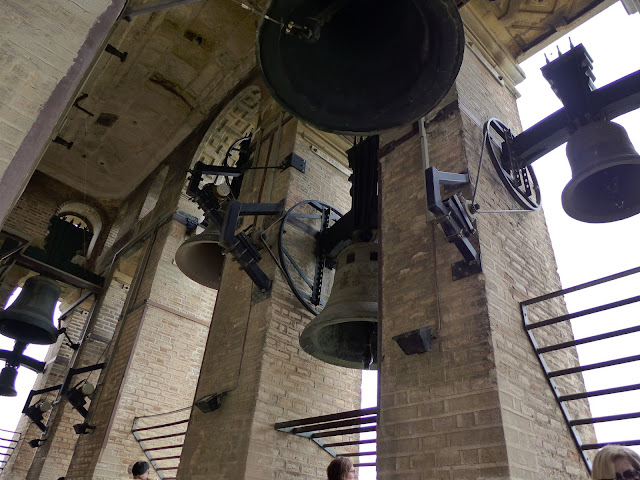 The belfry at the tower

THE VIEW FROM THE TOP - HISTORIC SEVILLE 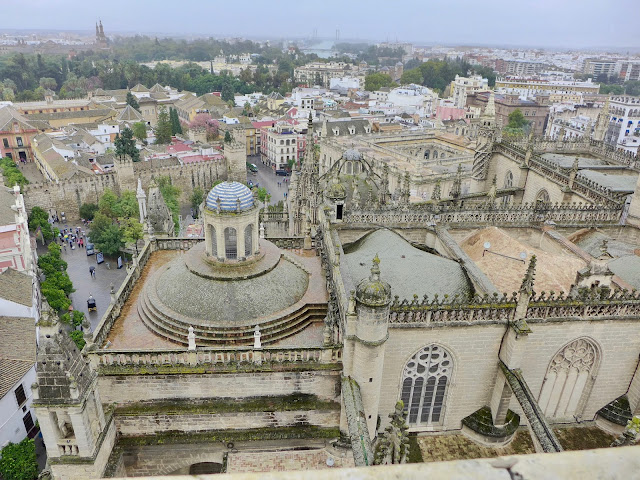 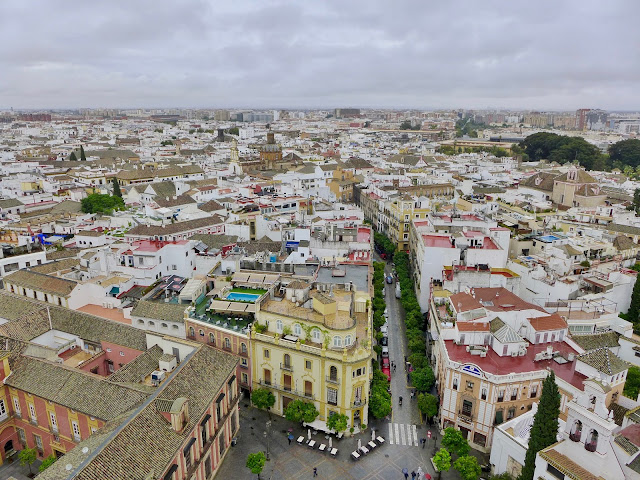 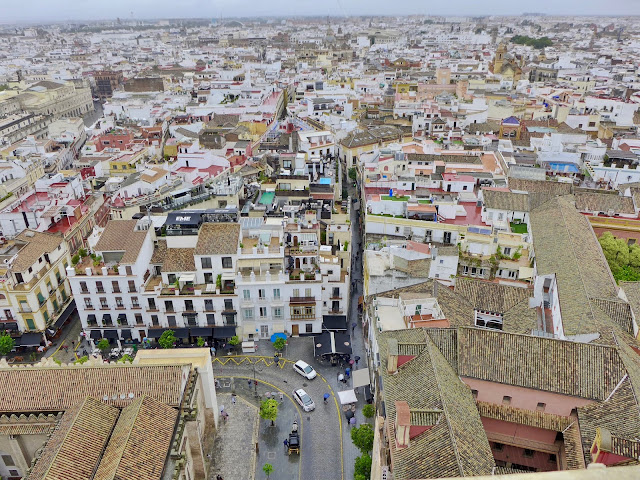 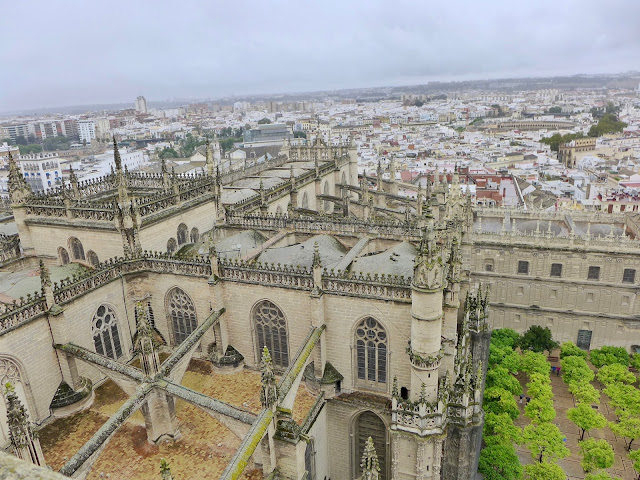 The Courtyard - view from the top 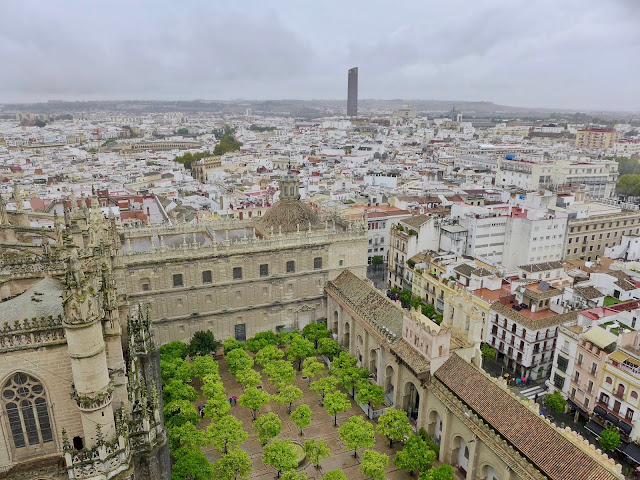 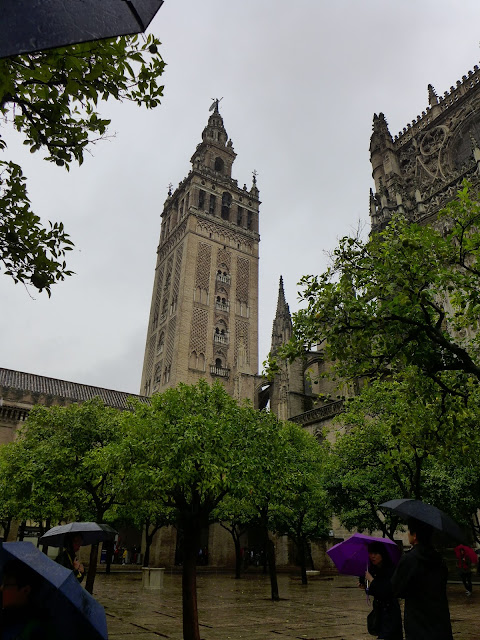 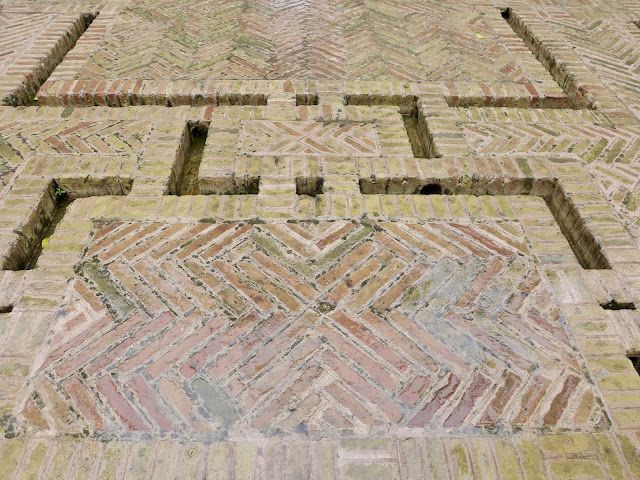 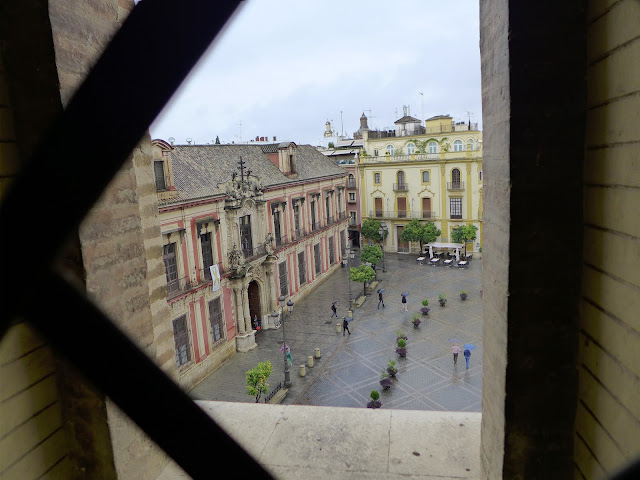 View of the Archbishop's Palace to the left 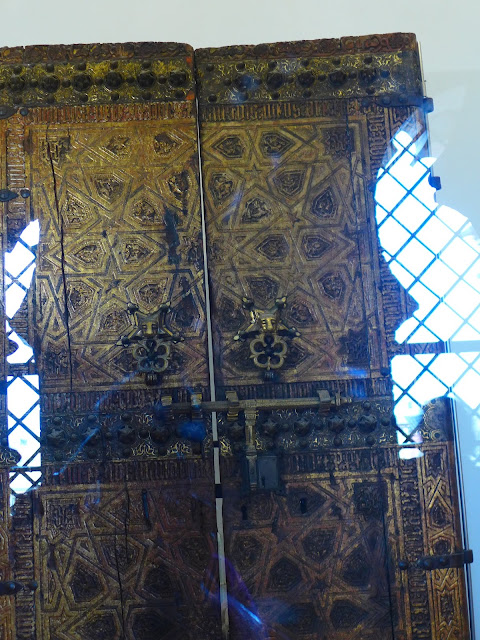 One of the doors in the minaret, now part of a collection of artifacts on display 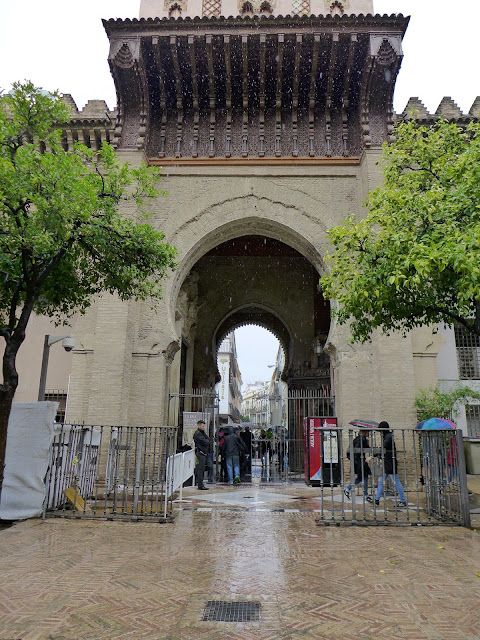 While looking from the ground level at the cathedral and the tower next to each other, there is a noticeable difference in the materials used in their construction. According to our tour guide, the use of the bricks in La Giralda was a reflection of the belief in Islam that worldly things will not last forever, while the use of stones in the cathedral signified a solid foundation in our faith in God.

Next on our agenda to visit was the Cathedral of Seville.
Posted by yolanda at 14:24