This is a shop that specializes in Christmas decorations found in the different Christmas markets in the Alsatian region. La Féerie de Noël has the most variety of some traditional Christmas decorations, with some limited editions from "Käthe Wohlfahrt's Childhood Dream", nutcrackers, pyramid trees and crèches, decorated pine cones, glass balls, brass ornaments, and an assortment of table settings and candle holders, to create the setting for an Alsatian Christmas- holiday celebration. 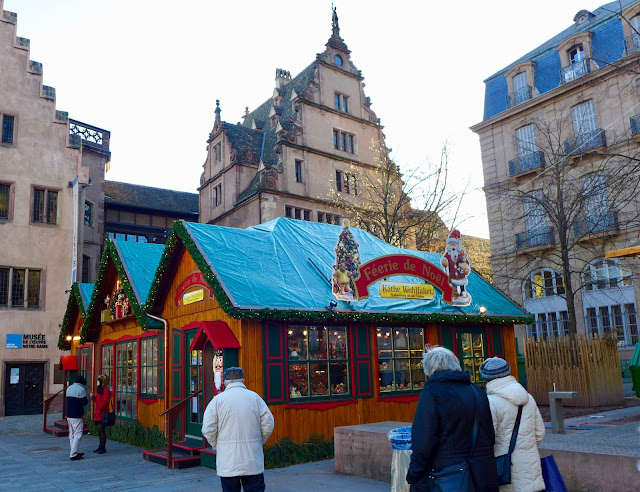 Martin Luther, who gave the reformation a kickstart, was instrumental in changing the Christmas season celebration from being about St. Nicholas Day to making it a celebration about the Christ Child, and that led to the holiday celebration of Christmas and the renaming of the holiday markets to Christkindl markets.

Though, the creation of ornaments for use with the celebration of St. Nicholas Day  (celebrated on December 6th in the Christian calendar), after the change in the focus of the celebration to the Infant Jesus, the ornaments became part of the Christmas tradition. 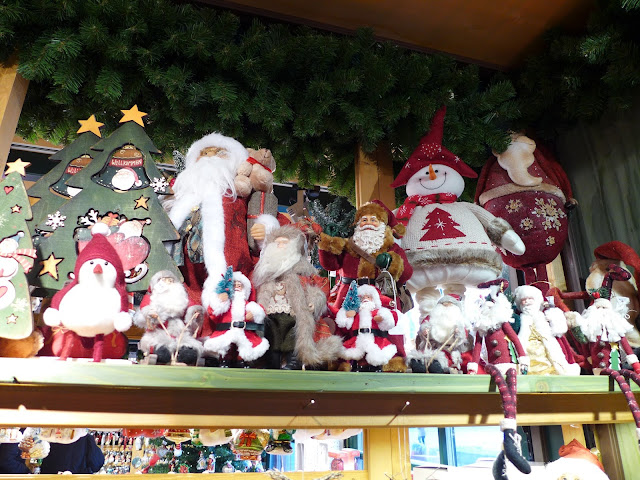 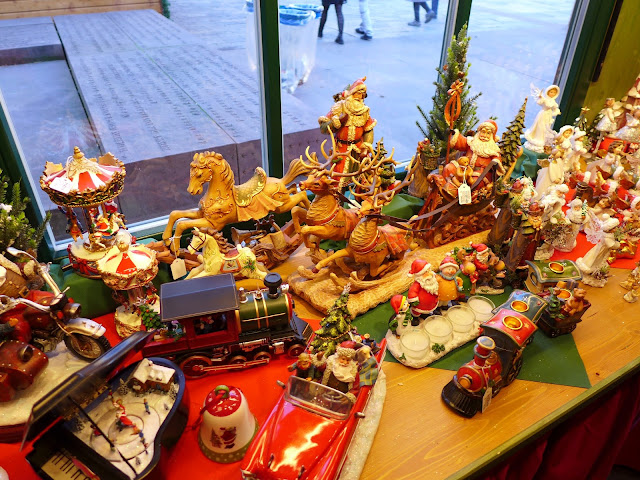 Saint Nicholas was a 4th-century Christian saint, who was a Bishop of Myra in Asia Minor. He was called "Nikolaos the Wonderworker." His reputation among the people in his village was that of a secret-gift giver. Thus, he became the model for Père Noël (Father Christmas), Sinterklaas, and  Santa Claus.

*********
A-Frame Pyramids and other Decorations
made by German Artisans 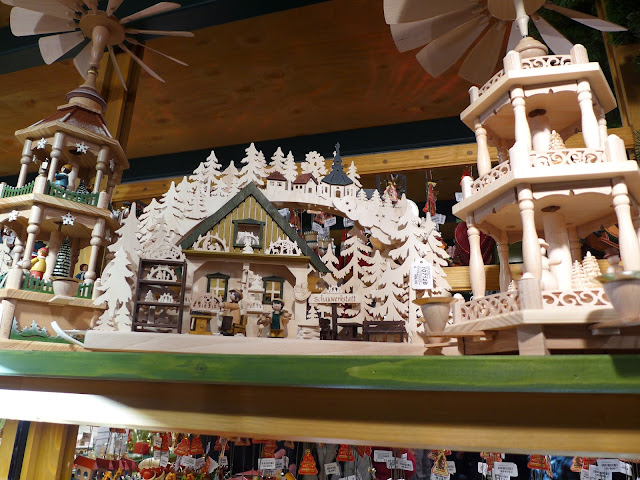 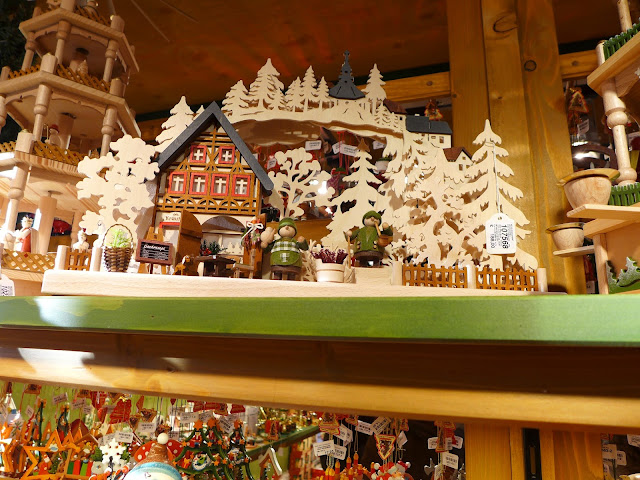 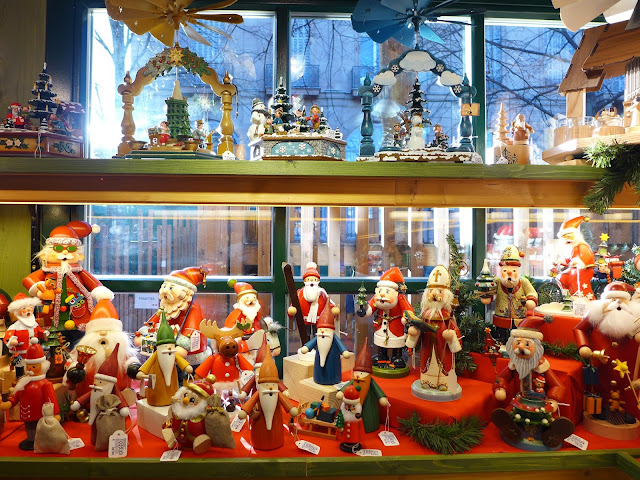 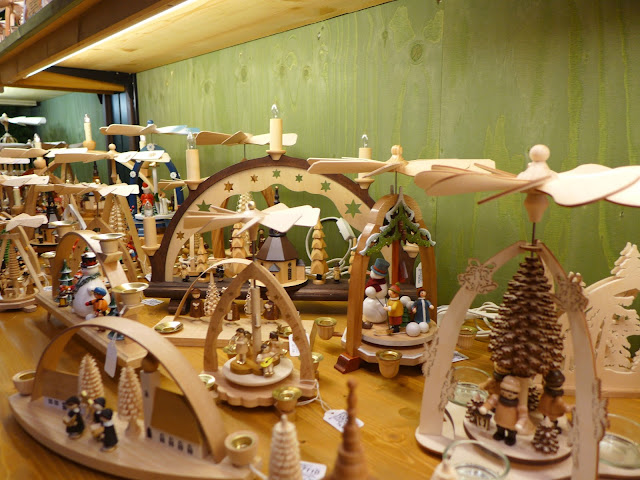 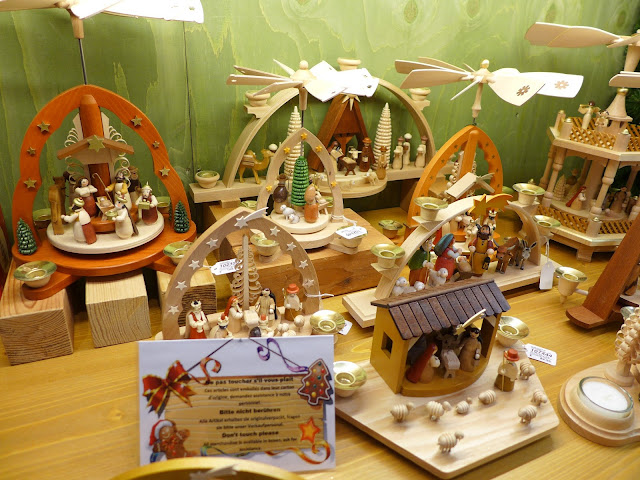 As Martin Luther wanted to include two biblical themes - the stories of paradise and the  nativity of our Lord into one representation, the Christmas tree came about. Because trees were not always readily available, the people started making an A-frame pyramid, with an evergreen bough tied to it. In it were little figurines - characters depicting Adam and Eve in paradise and their fall from God's grace due to sin. Later on, other characters found their places in the pyramid about the birth of the Christ child -  the redeemer of the world. On the boughs hang small candies and wafers, folded or cut papers following the theme of the two stories from the Bible. From this came the German pyramid or the candle carousel, and the Christmas tree. 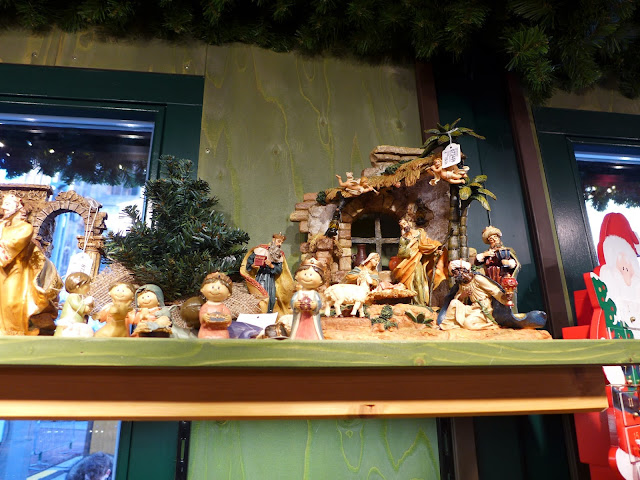 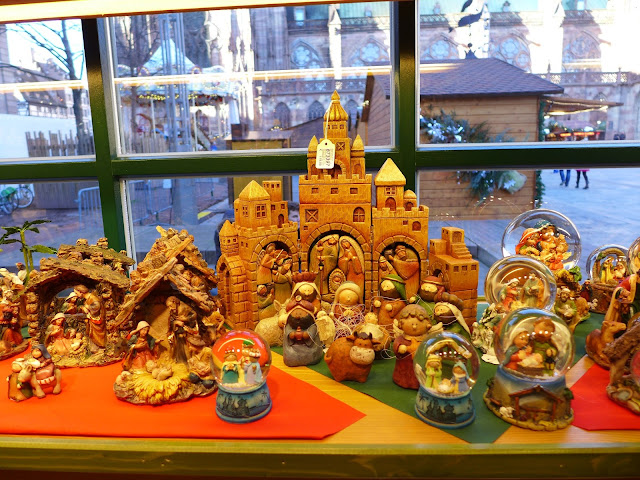 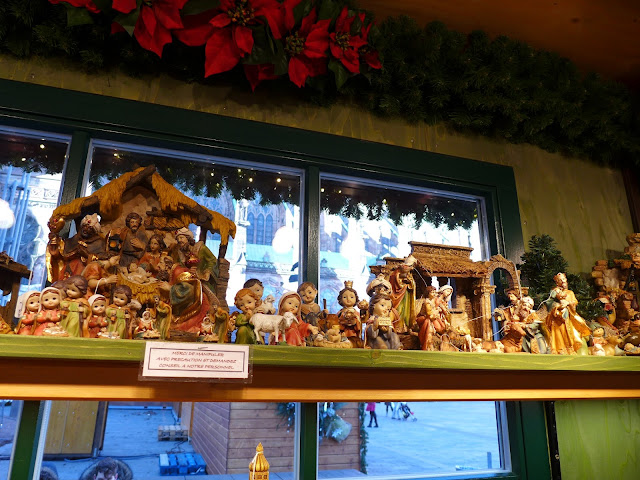 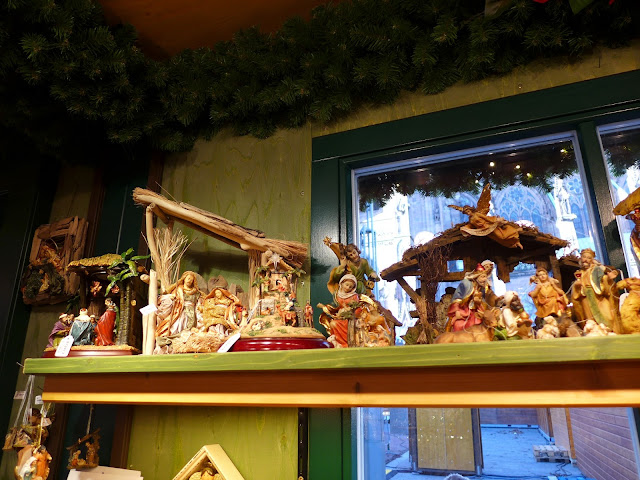 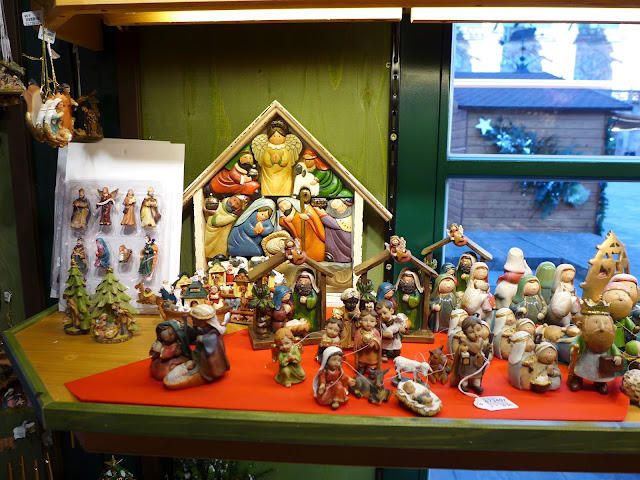 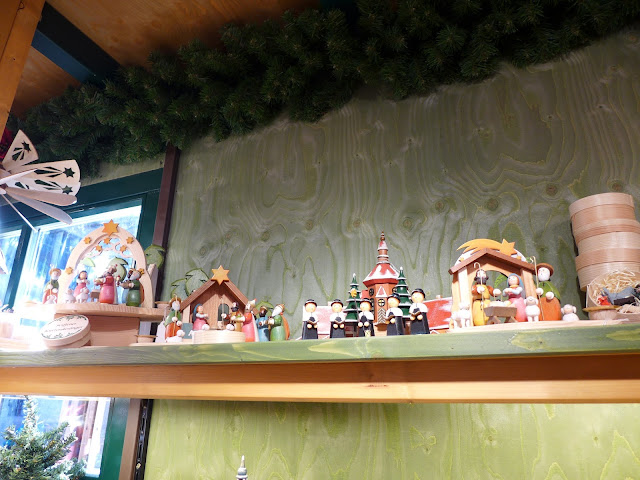 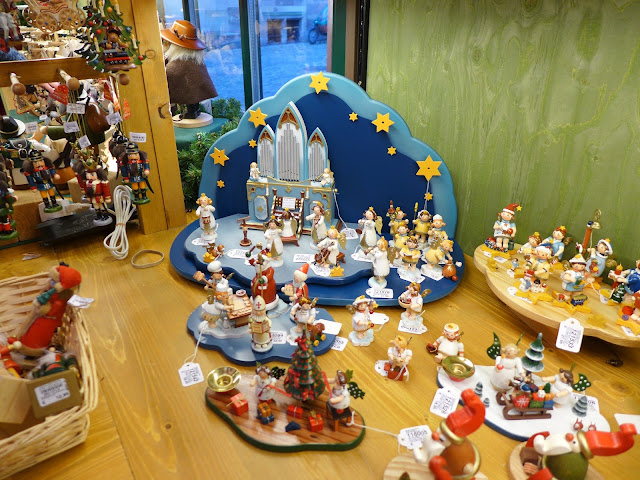 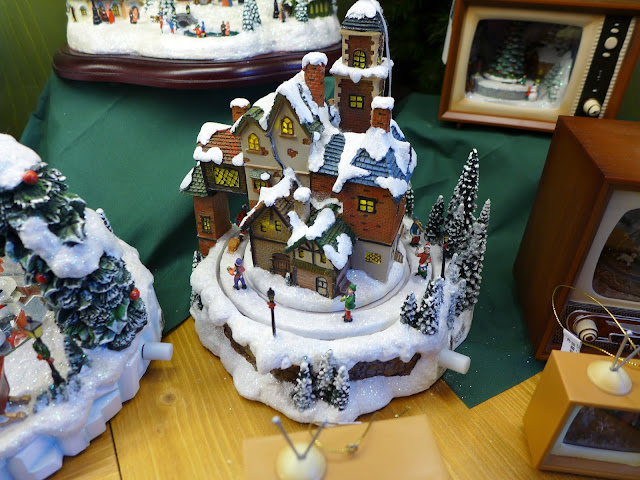 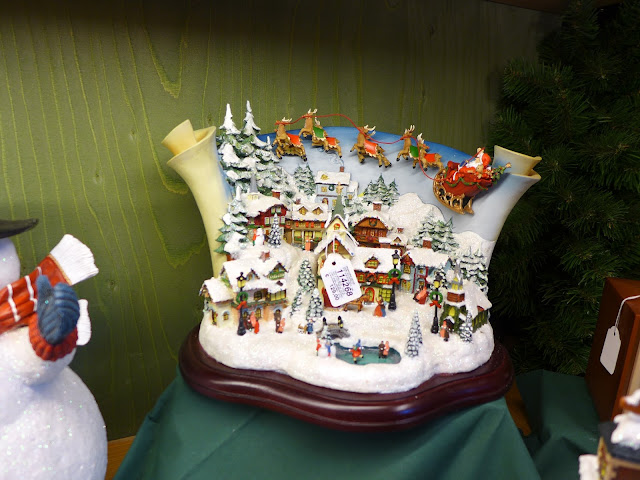 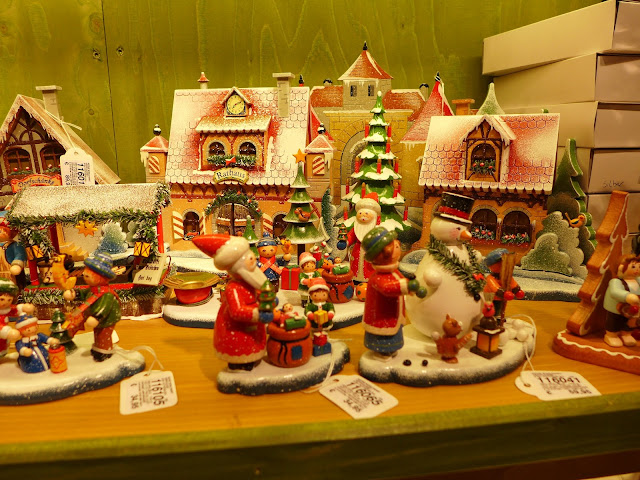 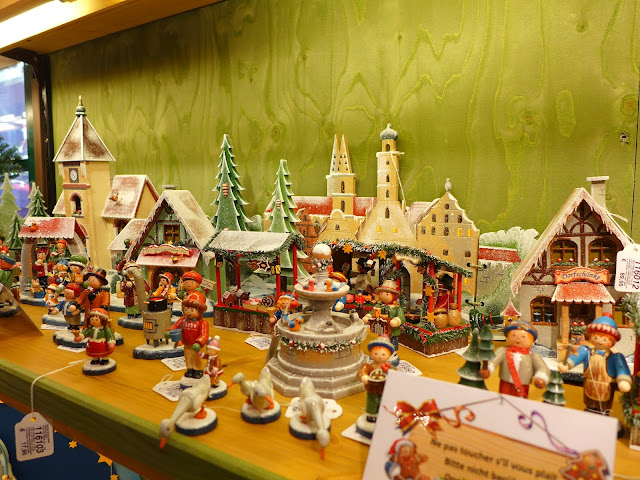 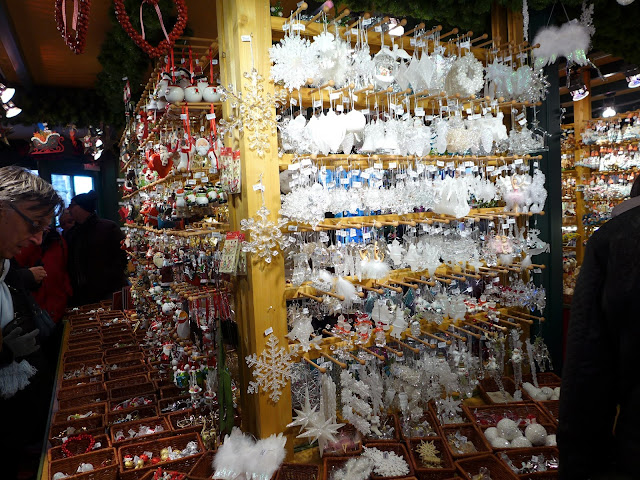 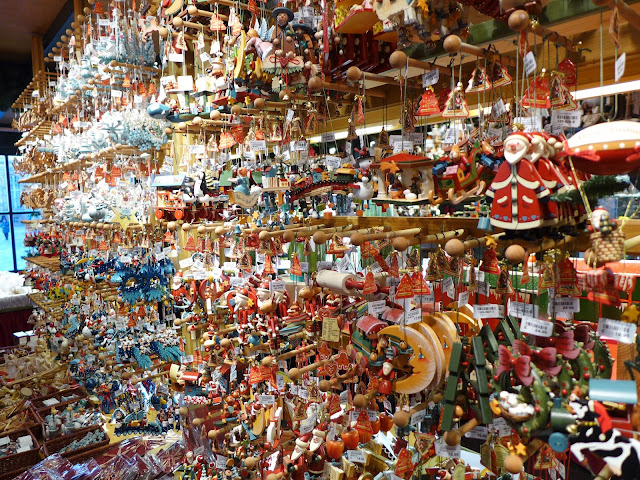 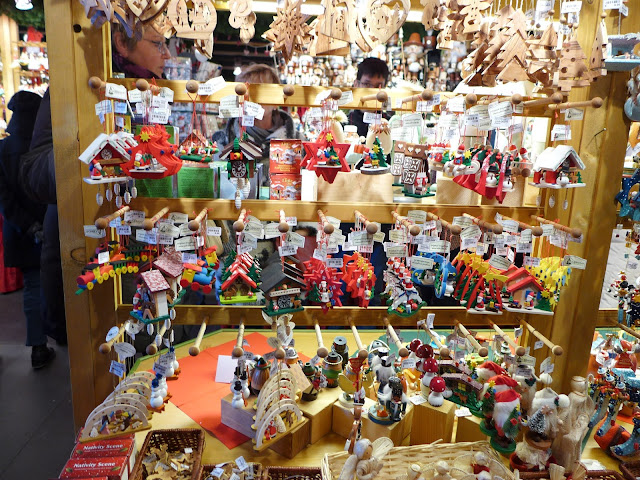 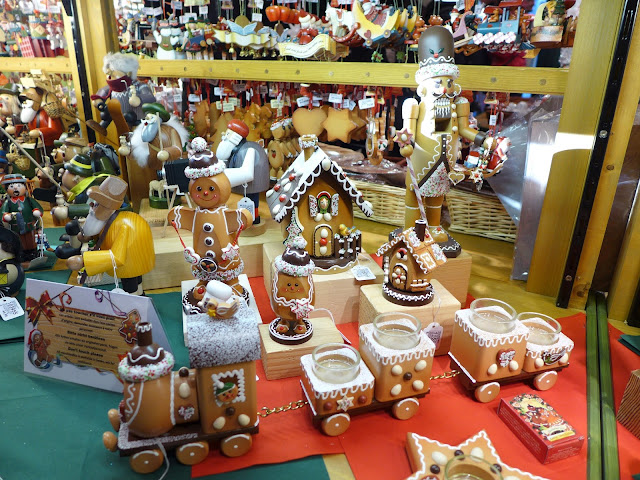 Having a Christmas tree is now the traditional decoration as the holiday season comes around, filled with ornaments that people find nice and pretty, and not necessarily related to the two Biblical themes.

In the olden days, it was the farmers - in their spare time beginning in spring - who were making the hand-hewn ornaments, works of art that were made from cut paper, shaved wood, and twisted wire. Dried fruits ands nuts were also used to adorn the trees.

In 1800, in Lauscha, Germany, a company started to produce ornaments on a commercial scale. Using other materials, such as marble, flasks and dishware, more artistic creations in ornamentation were added. In time,  the company started using blown-glass that was molded while still hot, then hand painted. Icicles, stars, bells, animals, angels were added to the usual fruit and nut designs they had started with. Ornament figurines of saints and political figures followed.

It was only in the mid-nineteenth century that other countries followed suit in decorating Christmas trees during the holidays. England set the pace when in 1846, the royal family - with Queen Victoria and Prince Philip - had a family picture taken with a decorated Christmas tree in the background. After the royal family pictures published, soon, the Christmas tree became the rage in the rest of Europe, and Woolworth Five and Dime stores brought the concept to the United States of having a Christmas tree for the big, holiday celebration for the German immigrants - who, of course, were happy as this gave them back a tradition they had in the old country. And the rest is history!

While Christmas has become commercialized, there are still handmade ornaments by German artisans that are being imported into the United States. These are truly works of art.

Perhaps, you, too can have an Alsatian-Christmas theme as you decorate your homes this season. It brings warmth and beauty as you celebrate, even more so when you include some Alsatian holiday food specialties to times spent with the family and friends this Christmas.