Cold and still dark, the mostly Latino crowd celebrated " Las mañanitas  a la Virgen de Guadalupe " today, on December 12, 2015. At the parish church I went to, it was standing-room only. It was a celebration in honor of the feast of Our Lady of Guadalupe. 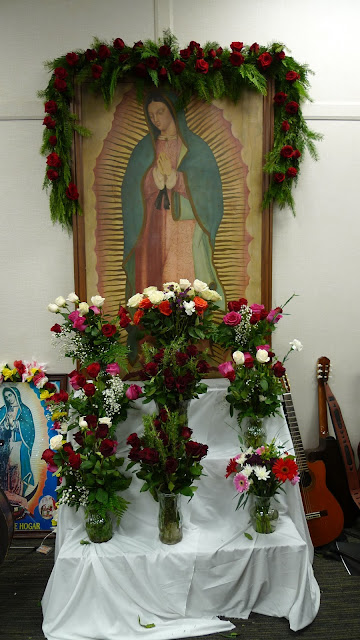 "Las mañanitas a la Virgen de Guadalupe" is a Mexican tradition. On this feast day, the faithful come with roses to offer to Our Lady, and place them by her image. "Las mañanitas" is a Mexican, traditional birthday song sung early in the morning, to awaken the birthday celebrant. 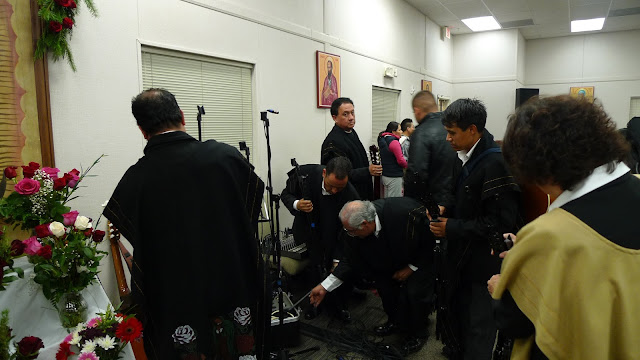 The serenading commenced at 6:00 a.m. The mariachi lead the serenade to Our Lady of Guadalupe, prior to the scheduled mass at 6:30 a.m. 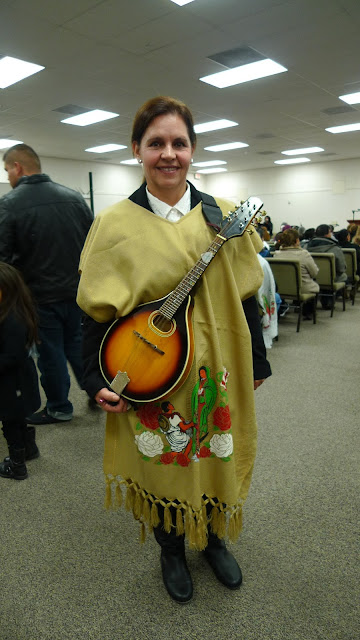 One of the mariachi group members agreed to pose for a picture of  their uniform - the  tilma - a mantle worn as outer wear, had a design on the front and back sections of the scene depicting the apparition of the Virgin Mary to Juan Diego. The whole celebration was in Spanish.

In narrative form, here is my version of the story.

Juan Diego was a native Mexican of little means and education. He was a weaver, a farmer, and a laborer. Born in 1474 in the town of Tlayacac in Cuauhtilan, about twenty kilometers from Tenochtitlan (Mexico City), he was a very spiritual man who made regular trips, on foot, to receive catechetical instructions and hear mass. His town was established by the Nahua tribesmen in 1168, and conquered by Axayacatl, the Aztec lord, in 1467. This was at a time when the war had ended a few years before and the religious fervor of the people was growing.

On one of his treks to go to church, to pray for his sick uncle, he heard a sweet sound and climbed up the hill to see where it was coming from. There, he saw an unusual vision. There was a beautiful woman who appeared like an Aztec princess in what seemed like a bejeweled surrounding, who called out to him on Tepeyac Hill. She identified herself as the Virgin Mary and asked him where he was going. As he briefly explained what his task was for this day, she lovingly responded to him that his prayers were being heard. Then she  asked him to do something for her, to deliver a message to the bishop of Mexico. To this he bowed in submission and left his cares to the Virgin Mary, and he went about to see the bishop.

The bishop was skeptical to hear this message from the Virgin Mary - for a church to be built on the site where she appeared. It was to be a temple where she would show her love to all, her compassion, give help and protection, to listen to their prayers and laments, and to bring relief and answers to their prayers about their miseries and sorrows, for she was their merciful mother. The bishop asked for more information and proof as to the identity of Juan's celestial visitor.

With other things on his mind, Juan got sidetracked when he found out his uncle was dying. He missed his next rendezvous with the Lady. But, she met him on the path he had taken to let him know that his uncle was going to be cured and to go back to doing his mission for her.

After his third visit to the bishop, narrating the same course of events that led him to there, in the first place, the bishop had Juan followed, to track him down to see what he was up to. But they lost sight of him. Juan was saddened by the bishop's deaf ears to his message.  It had gotten harder to see the bishop in his subsequent visits, since the first time.


During the fourth apparition, the Lady asked Juan to go up the hill to gather what ever he would find there. It was the month of December when freezing temperatures made it impossible for anything to grow, not even weeds. To his surprise, Juan found colorful flowers with the sweetest scent. He gathered them and carried them on his tilma (a blanket, cape) that he was wearing to keep him warm. When he showed them to the Lady, she asked him to bring the roses to the bishop as proof of who she was.

Juan went back to the bishop's palace to bring the proof that had been requested. But the servants and the other workers would not let him in. They wanted to see what he had in his tilma, but he would not let them. Thy grappled with him to take whatever he had, but when they opened his tilma, there was nothing but painted images. Finally after his long, persistent wait, and convinced that he had something important to show the bishop, they let him in.

Juan explained to the bishop that this was the proof being sent to him that he my believe the message of the Lady. As soon as he unfurled Juan's tilma, Castillian roses dropped down to the floor - a variety that did not grow in Mexico, and to the amazement of the bishop and the others in the room, the image of the Lady was imprinted on the tilma. With sorrowful hearts, they prayed for forgiveness for their unbelief and their actions.

The bishop took the tilma and placed it in the chapel and, thereafter, asked Juan Diego to show them the site the following day. Then, Juan wanted to go home. Accompanied by the bishop's people, they all met the uncle who had miraculously recovered and was happily up and about. The uncle, Juan Bernardino, told them the story of how the Lady had visited him to cure him and explained to him why his nephew could not come home, as she explained the reason for sending him to the bishop.

The construction of the basilica began in 1531 with the design of architect Pedro de Arrieta, and completed in 1709. Juan Diego's tilma was transferred here from the chapel of the bishop's palace in 1709 and stayed there up to 1974. A bomb was planted in the church in 1921 by an anti-clerical activist. The explosion damaged the building's interior, but the tilma survived, with some minor damage. In time, the basilica started to sink as the city was built over a lake. A new basilica was constructed close to the original location. The old basilica, after repairs and renovations has been reopened to the public, and this is where the perpetual adoration is held.

The modern-looking basilica - a circular building, was built in 1974 to 1976 by Mexican architect Pedro Ramirez Vasquez, who used a structural design with a major pylon to keep it from sinking. Next to Vatican City, this receives the next highest number of pilgrims who come to visit, annually. Our Lady of Guadalupe has been declared as the patroness of the Americas.

Many wonder why Juan Diego was chosen as the deliverer of a very important, heavenly message, as invisible as he was to much of the society. As it is in most Marian apparitions, Mary our Mother, has appeared to simple-minded children. Matt 11:25, in Jesus' reply to those around him: "I give praise to you, Father, Lord of heaven and earth, for although you have hidden these things from the wise and the learned you have revealed them to the childlike."

Juan Diego never got to see the completed church. He died on May 30, 1548 at the age of 74. He considered himself  a nobody - "a small rope, a tiny ladder, the tail end, a leaf." In the eyes of our Lady, he who was of simple faith - walking 15 miles each time he went to hear mass, was the best instrument for her message to the world. He was canonized on July 31, 2002 by Blessed Pope John Paull II, and with this prayer he asked for his intercession: "Blessed Juan, you faced the skepticism and rejection from a bishop and the crowds to bring Mary's message to Mexico. Pray for us when we are faced with obstacles to our faith, that we may show that same courage and commitment. Amen."


The feast of Our Lady of Guadalupe is celebrated on December 12. Through her intercession, may there be peace and healing in the Americas and in the rest of the world. 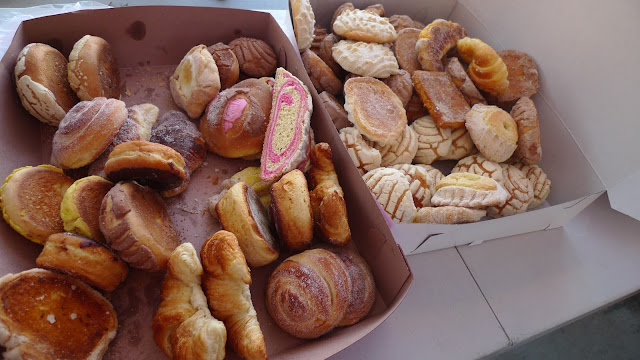 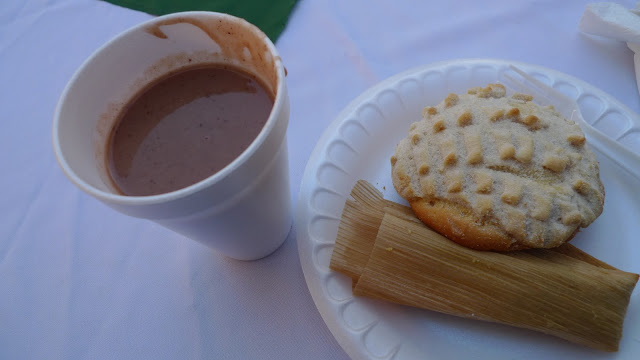 Attending this celebration transported me to somewhere in Mexico. From the mariachi singing, the mass in Spanish, the Mexican breakfast, the traditional costumes worn by some of the people added to the cultural significance of the day. 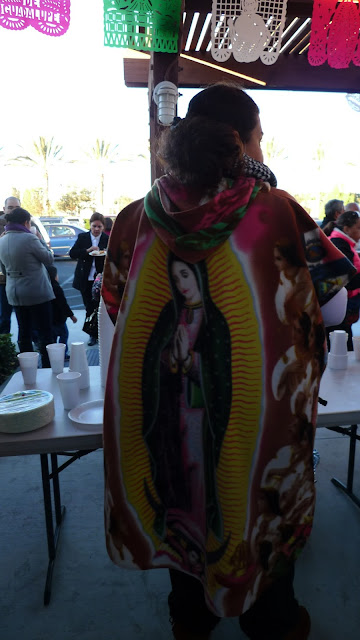 This tilma was made of a thick fleece material, with the image of Our Lady of Guadalupe as part of the fabric design. 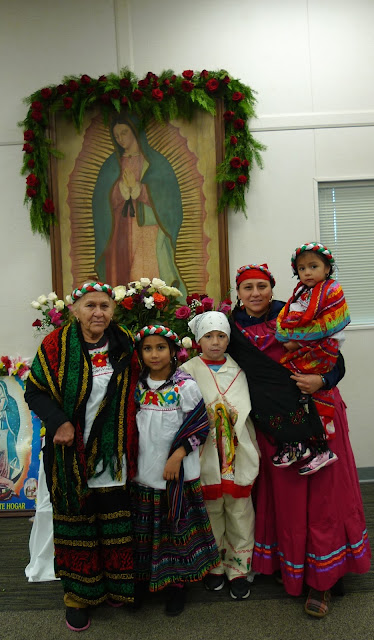 A family came in their traditional outfits typically worn by Mexican Indians found in a certain locality in Mexico. 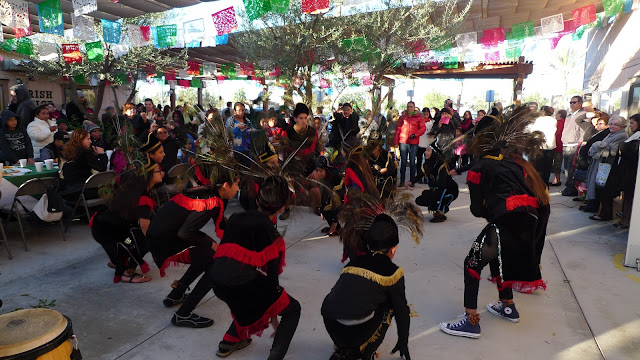 A group of students from a school performed a dance number to the rhythm of the drum beat. 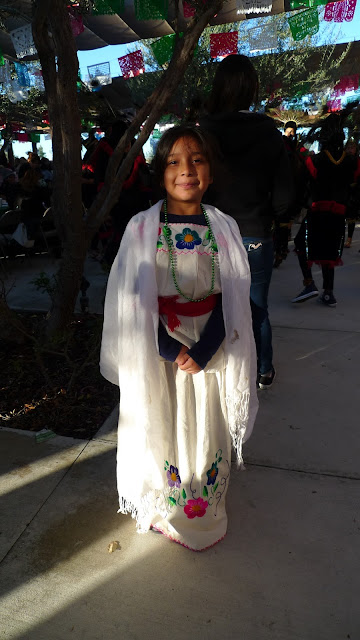 This seven-year old girl, was one of several kids who wore this traditional ensemble. She wore a long skirt with a matching blouse, embroidered with big flowers. To keep her warm, she wore a sweater that was inside her blouse and a shawl over her shoulders.

As we anticipate and prepare for the celebration Christmas, we are called to join in the nine-day novena - Las Posadas -  to trace the steps Mary and Joseph took, starting this Monday, December 14. It is another Mexican tradition. It was brought by the Spanish friars to Mexico some 400 years ago.