Chemin de Croix (Way of the Cross) in Paris, France

During Holy Week in Christendom, Good Friday is the holiest day as it is when we commemorate the Via Dolorosa. It is the way that Jesus took, while carrying his cross to his crucifixion.

Around the fourteenth century, during the papacy of Pope Clement VI, the Franciscans were given custody of the Holy Land, charged with taking care of the Christian pilgrims and the Catholic shrines. They had began the practice of taking the pilgrims on a tour on the Via Dolorosa. It was in 1517 that the route of Jesus Christ, as described in the Bible, was set in chronological order - from the house of Pilate and concluding with the crucifixion at Golgotha. From this came the devotional practice of the Way of the Cross, which spread  in Europe.

In present-day Jerusalem, there are 9 stations marked along a winding route from the Antonia Fortress to the Church of the Holy Sepulchre, and the last five stations are inside the church. Christian pilgrims make it a point to take this path,  established since the 18th century, as they follow the Via Dolorosa - the Way of the Cross, the "Way of Grief, Way of Sorrows, Way of Suffering, or simply the Painful Way," as they walk a distance of 600 meters (2,000 feet), in the footsteps of Jesus.

In France, the practice of conducting the Stations of the Cross on the streets is an annual event. Although France no longer has Catholicism as her state religion, a poll conducted indicated that majority of the French people are Catholics. As of 2010, 44% (41% Catholics, 2% Protestants, 1% other Christians) identified themselves as Christans, 29% agnostics, 13% atheist, 2% Islam, other 4%, "Don't know" 7%.

As France was very Catholic before the French revolution, many towns and cities developed around the churches that were built. Today, many of these churches still exist and carryon with the Catholic traditions in the different arrondissements.

From the rond point of the Champs Elysees, there was one  - Chemin de Croix (Way of the Cross) that was organized by Eglise St. Pierre de Chaillot.  The two hour way which gathered and started from the rond point moved on through avenue Montaigne (8th Arr.), around to Avenue President Wilson, and all the way to 31 Avenue Marceau (16th Arr.) 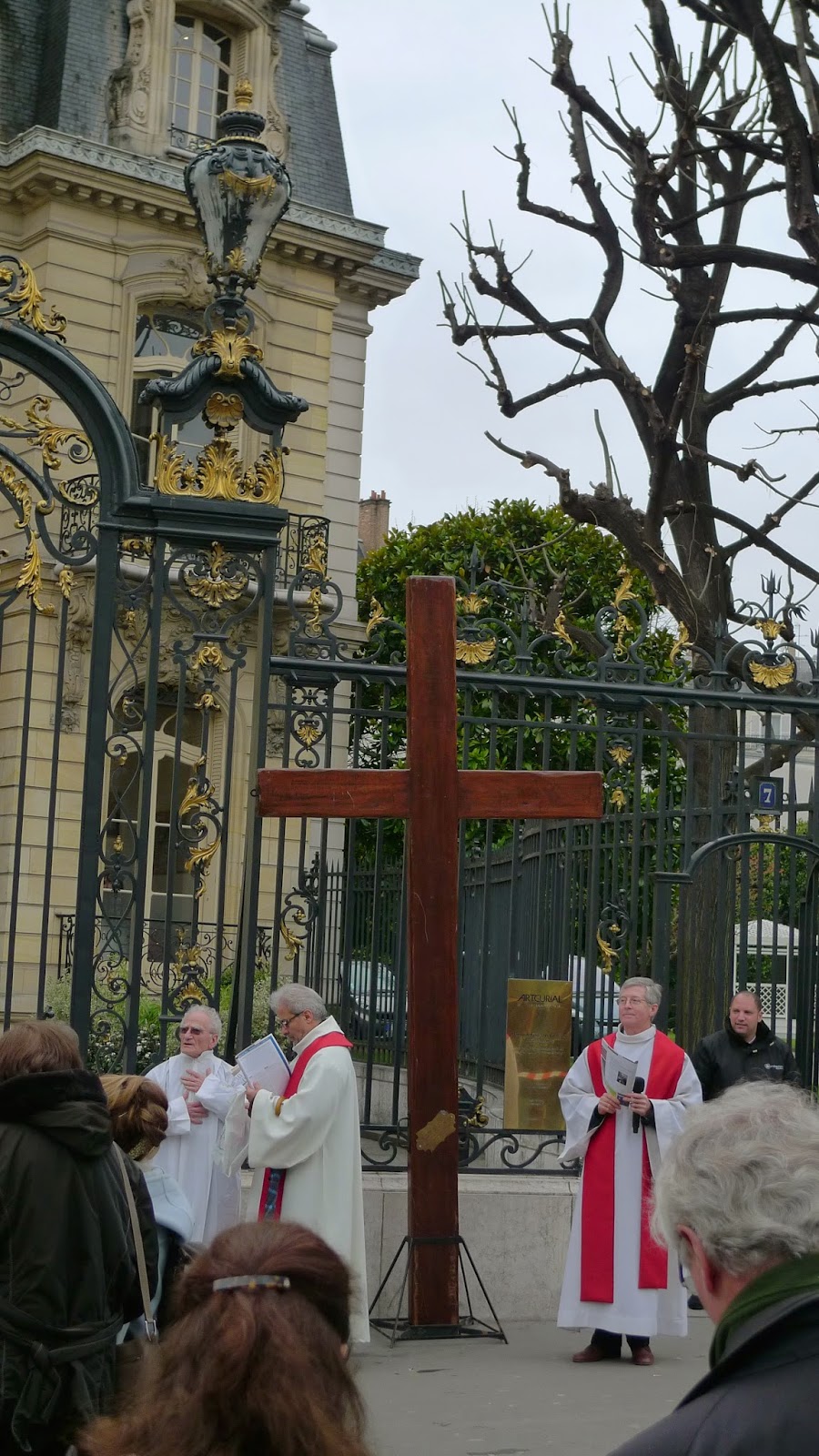 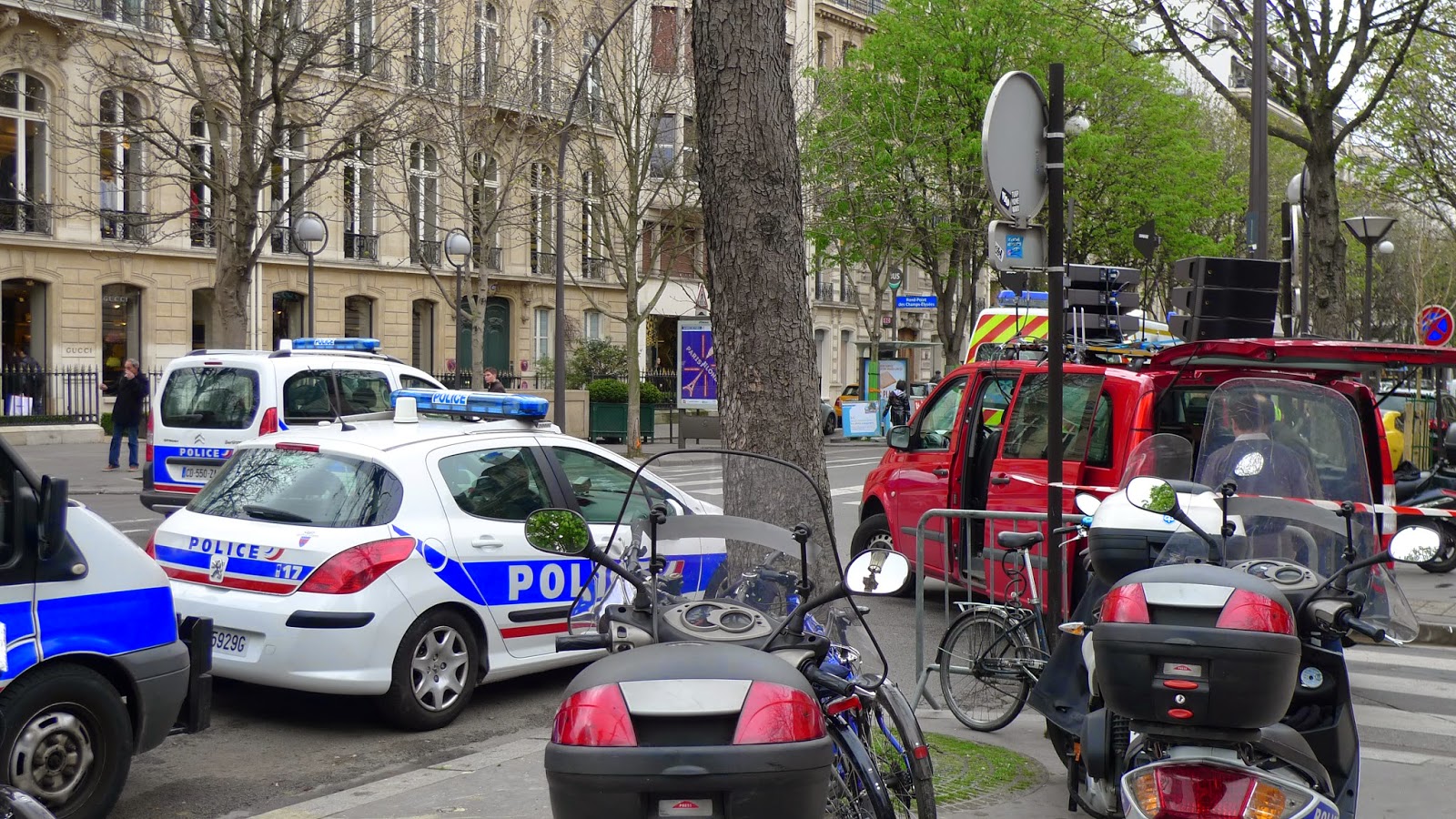 ...with police escort and a van with the sound system 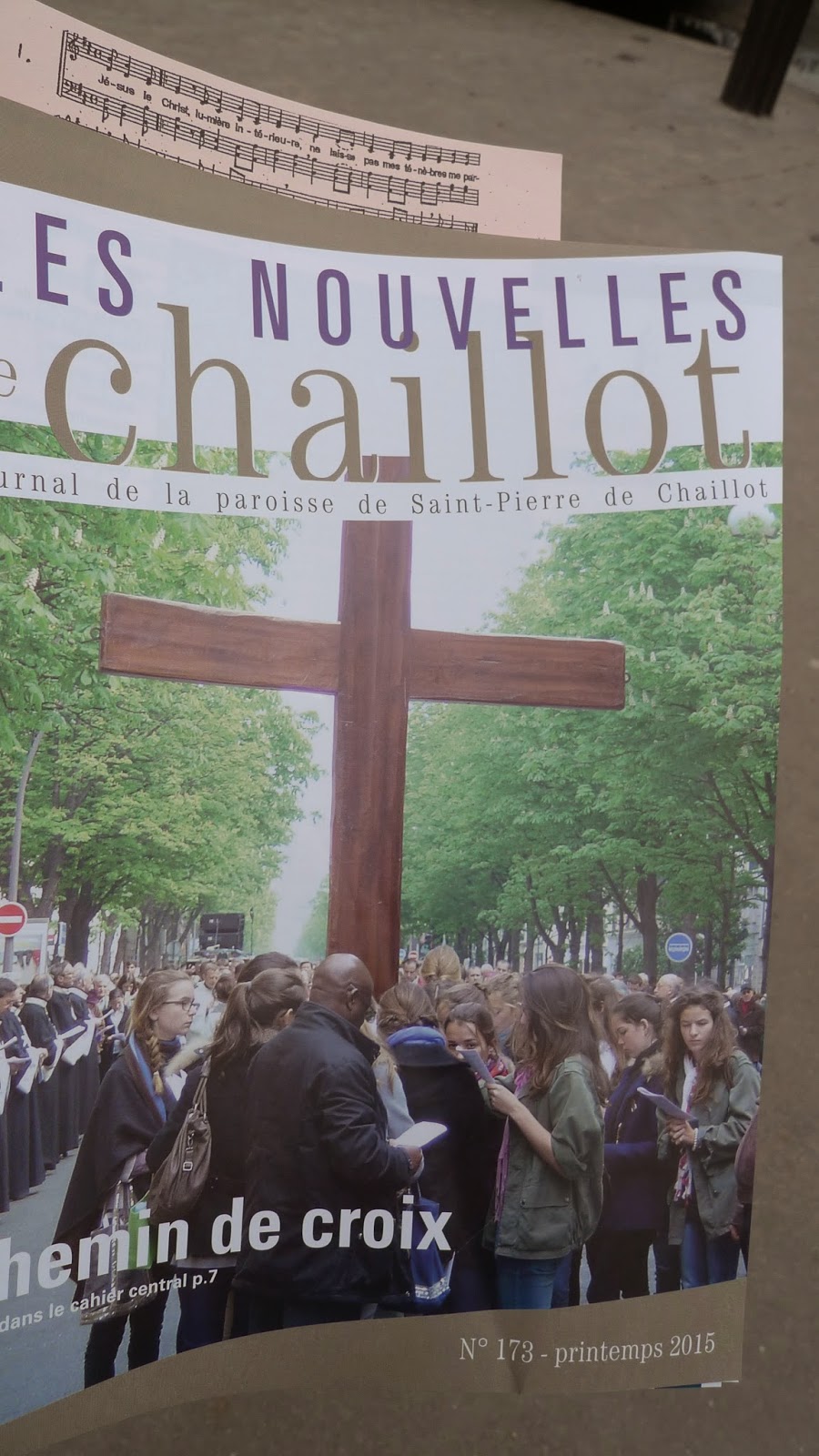 A program - prepared by the sponsor-church - was given to all attendees, as well as a music sheet - a guide to participate in the Way of the Cross - complete with Bible verses, meditations, prayers and songs. 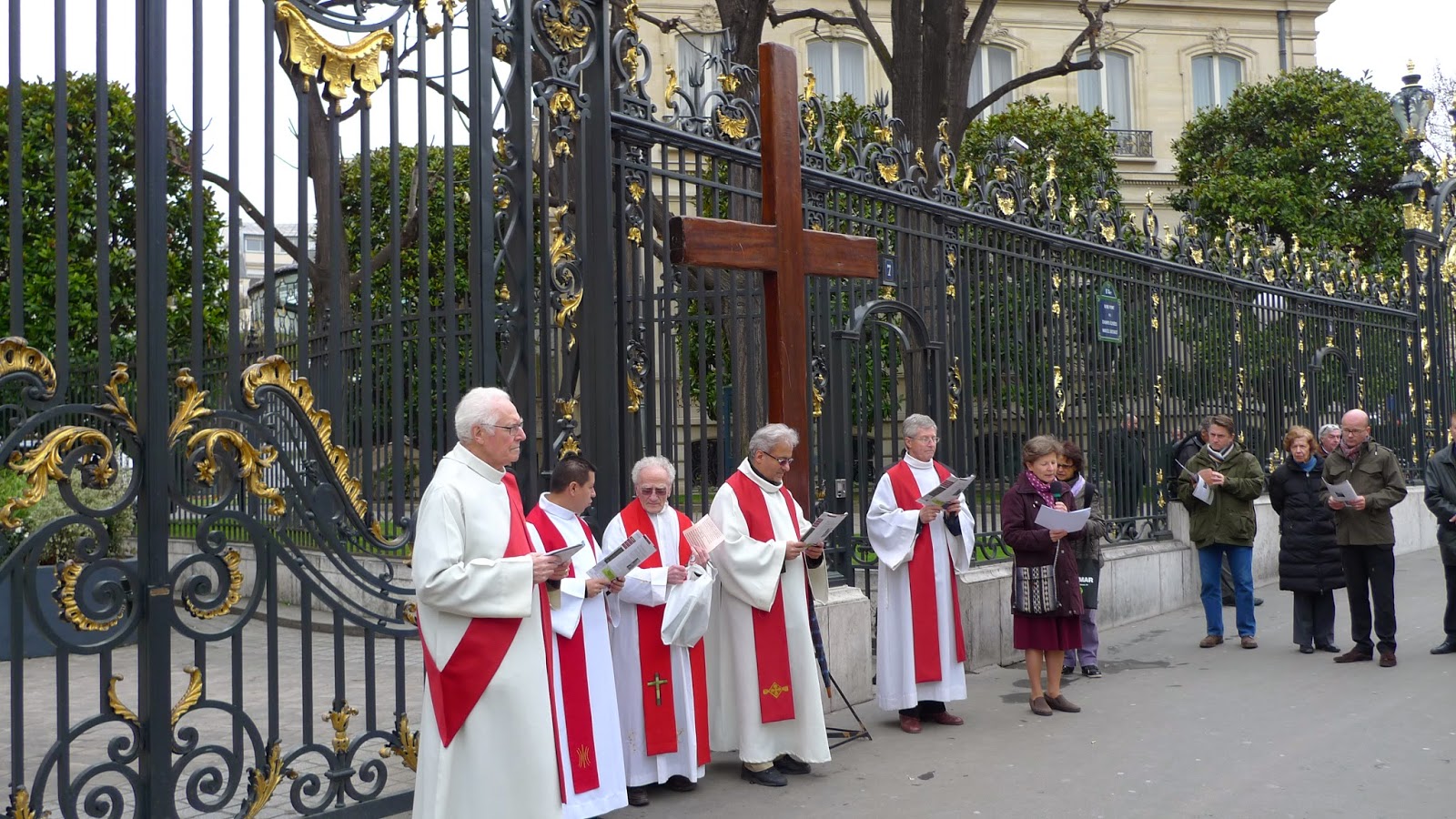 Fr. François d'Antin gave the welcome address.
Sister Cecile Renouard - head of the community of the Sisters of the Assumption on rue Luebeck, read the meditation of the Cross. 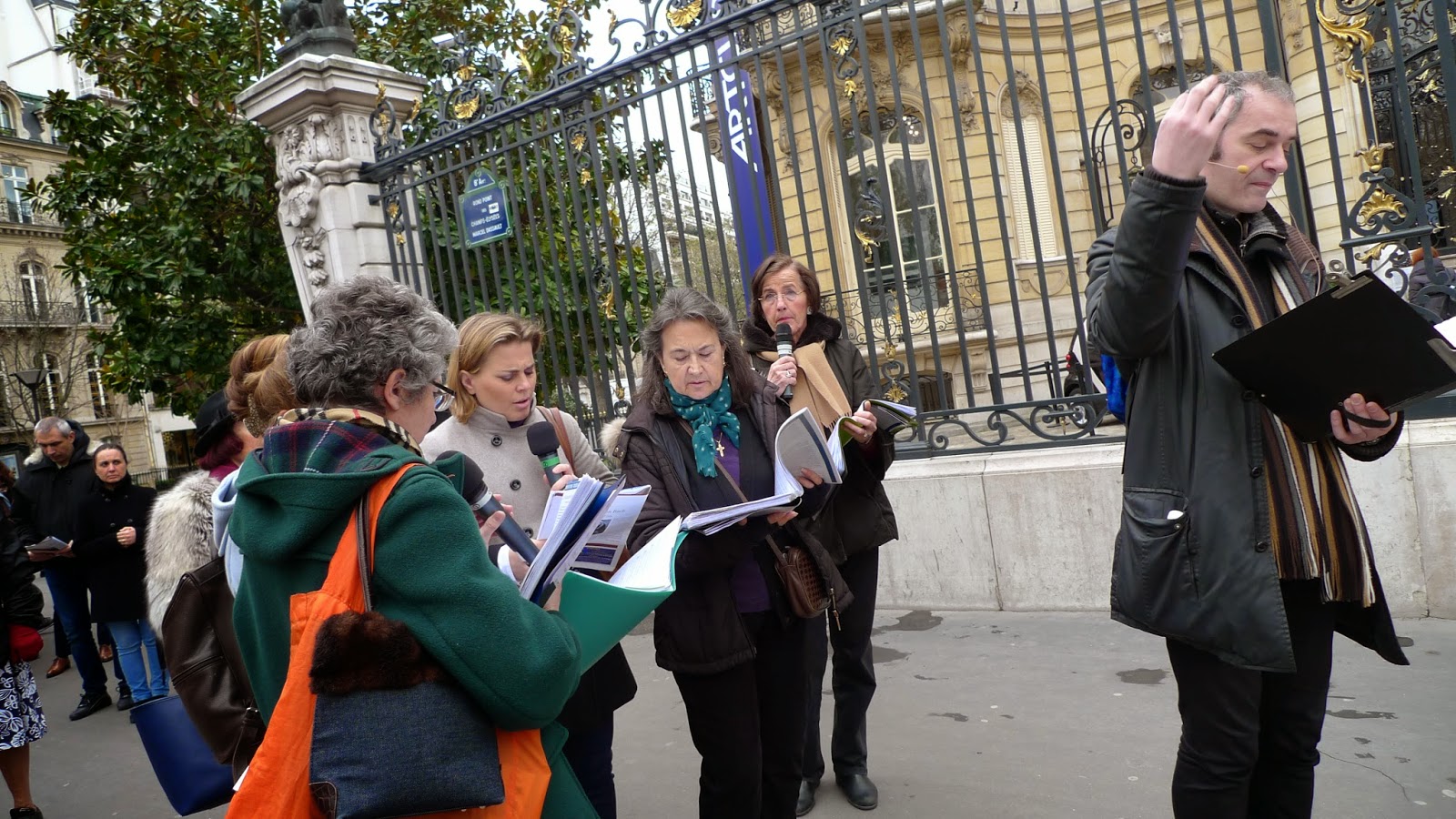 The parish choirmaster, Pascal Bezard, led the singing before the commencement of the Way of the Cross, after each station, and during the Veneration of the Cross.

1st STATION
Reading: Math 23: 23*
“Woe to you, scribes and Pharisees, you hypocrites. You pay tithes of mint and dill and cummin, and have neglected the weightier things of the law: judgment and mercy and fidelity. [But] these you should have done, without neglecting the others. 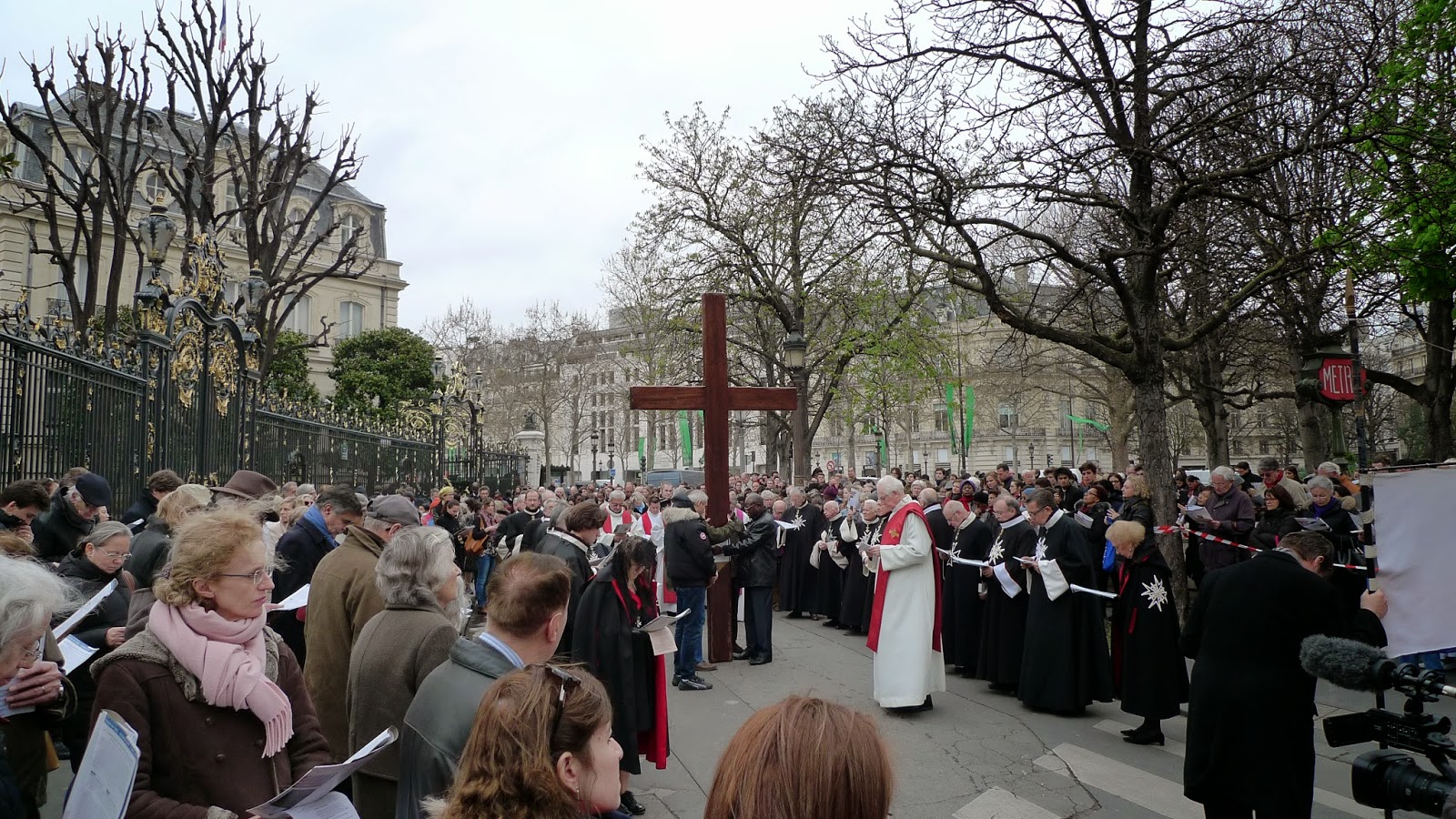 2nd STATION (by the rond point)
Reading: Luke 9: 23 - 25*
23Then he said to all, “If anyone wishes to come after me, he must deny himself and take up his cross daily* and follow me.n24For whoever wishes to save his life will lose it, but whoever loses his life for my sake will save it.o25What profit is there for one to gain the whole world yet lose or forfeit himself?
2 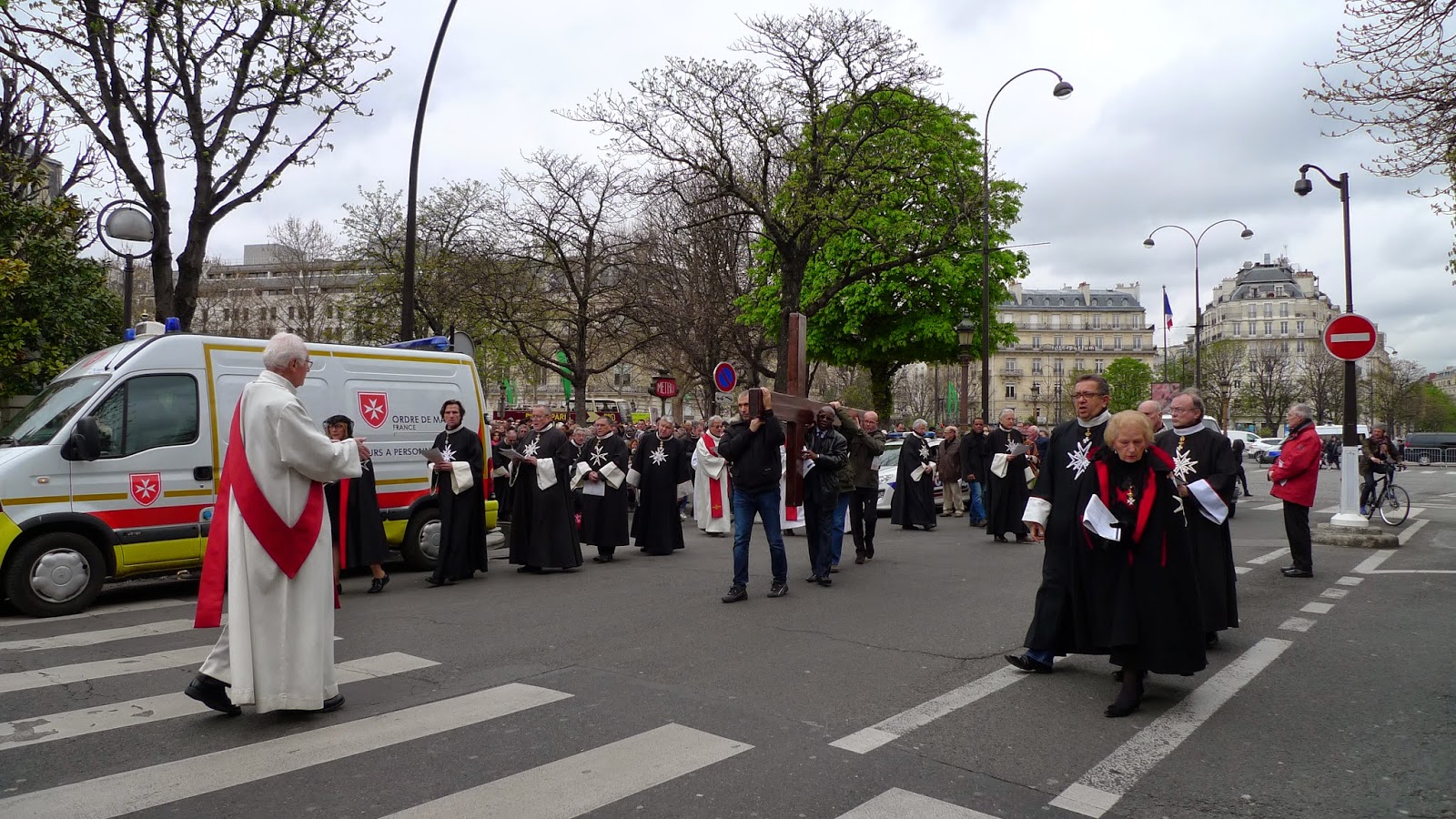 Members of the Order of Malta accompany the cross, along with the devotees, on Avenue Montaigne/Champs Elysees 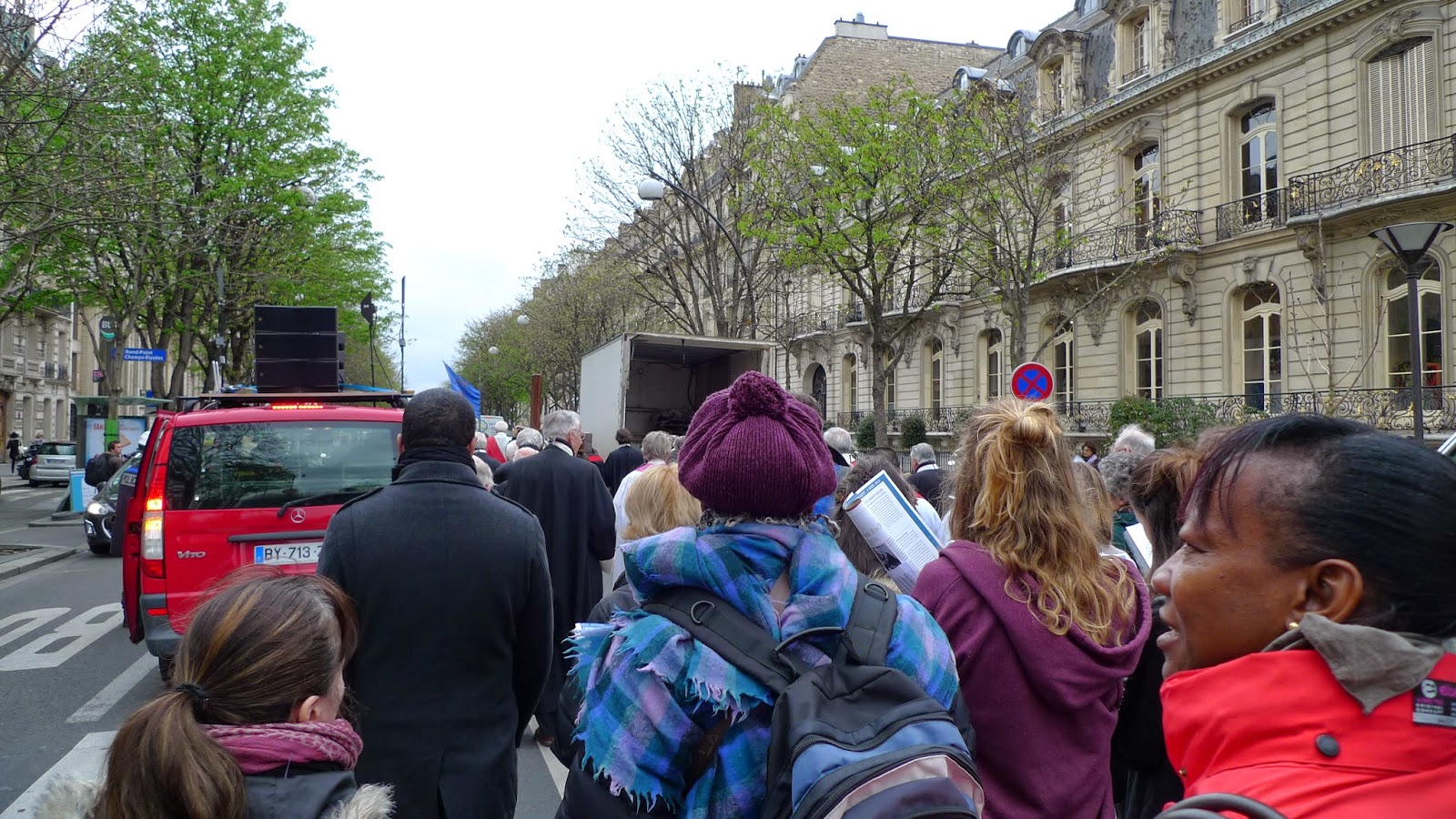 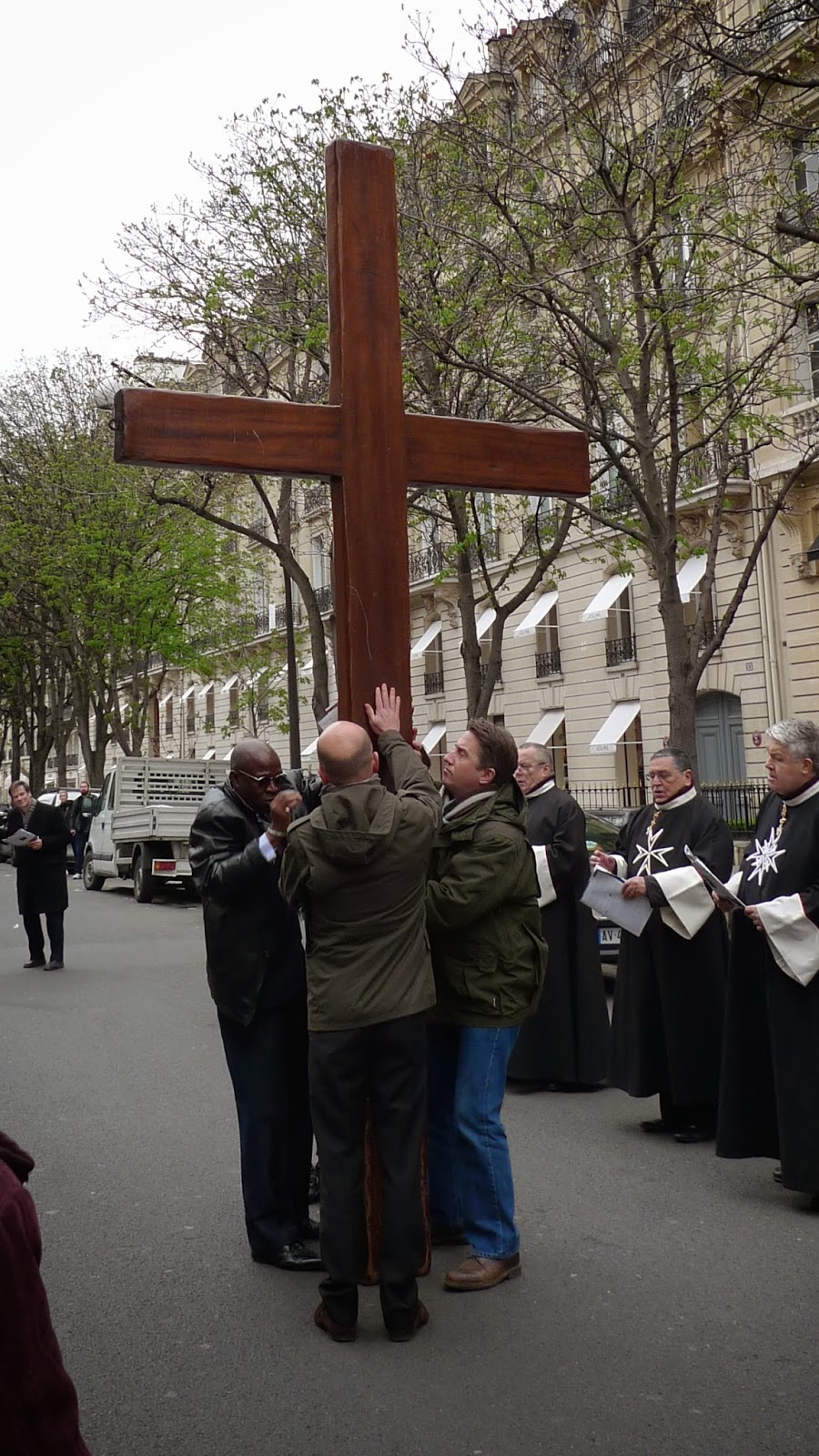 3rd Station
Reading: Psalm 141: 5 - 7*
*Let a righteous person strike me; it is mercy if he reproves me.
Do not withhold oil from my headc
while my prayer opposes their evil deeds.
May their leaders be cast over the cliff,
so that they hear that my speeches are pleasing.
Like the plowing and breaking up of the earth,
our bones are strewn at the mouth of Sheol. 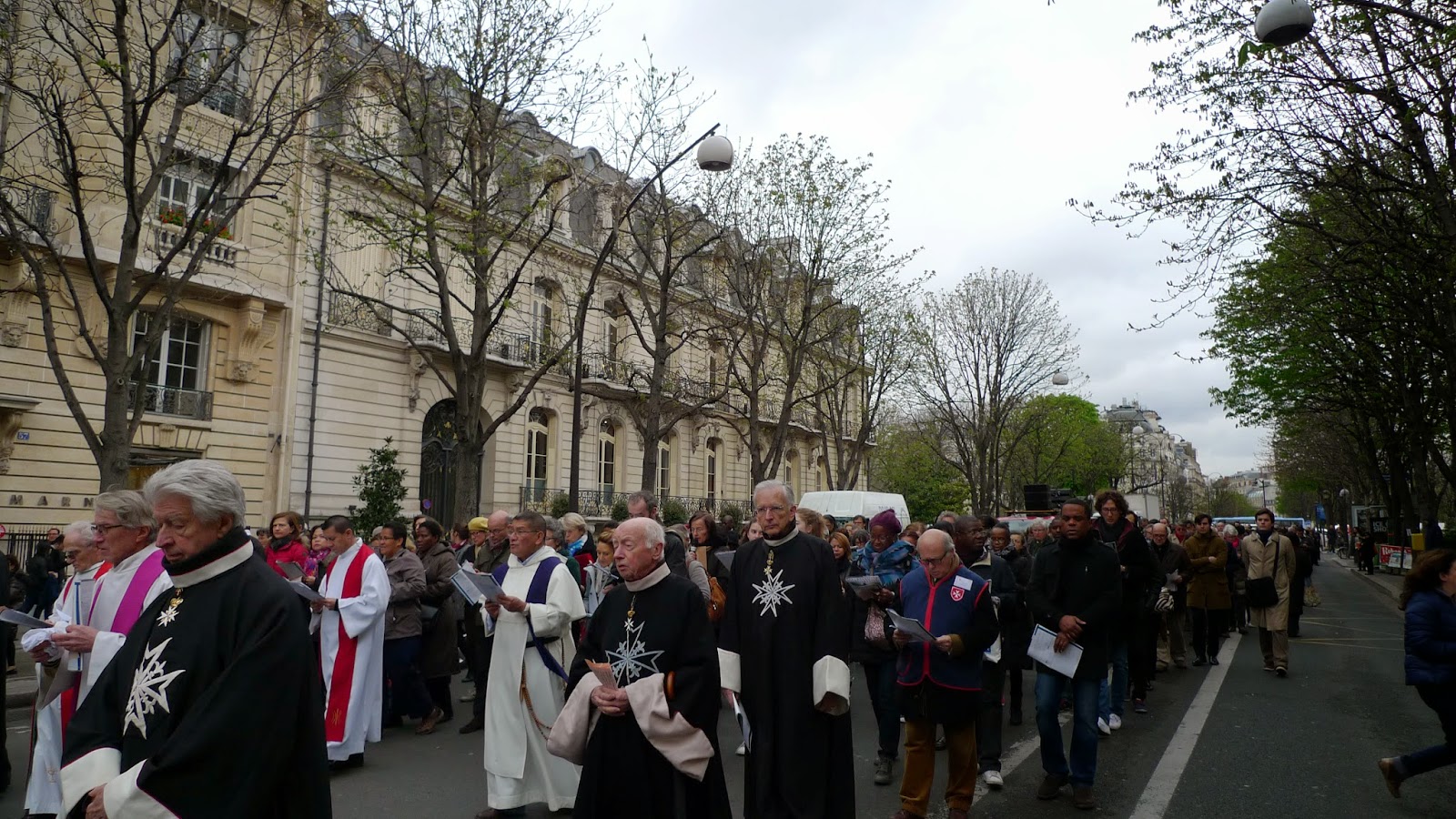 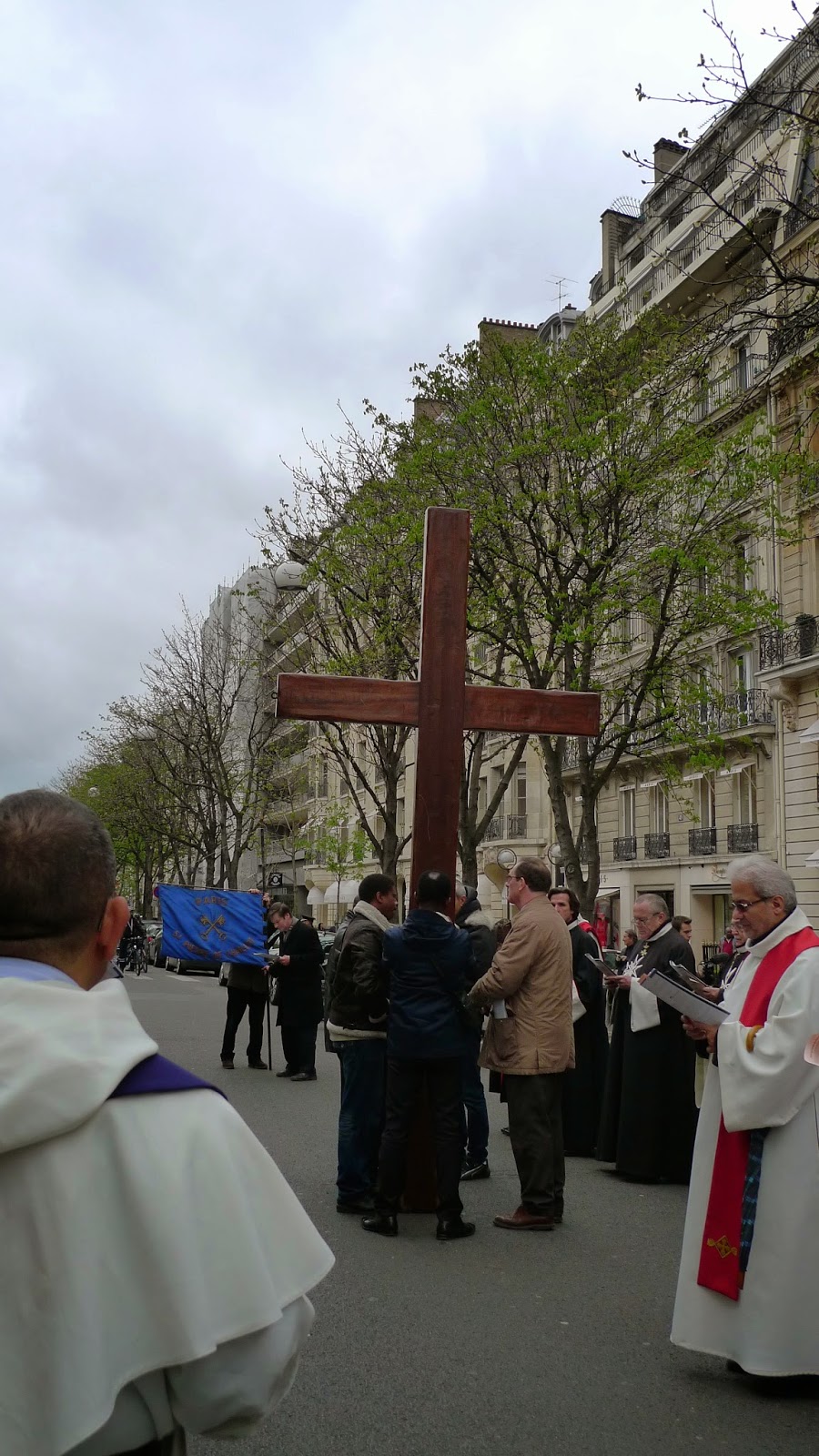 4th Station
Reading: Romans 8: 22 - 23*
22We know that all creation is groaning in labor pains even until now;q23and not only that, but we ourselves, who have the firstfruits of the Spirit, we also groan within ourselves as we wait for adoption, the redemption of our bodies. 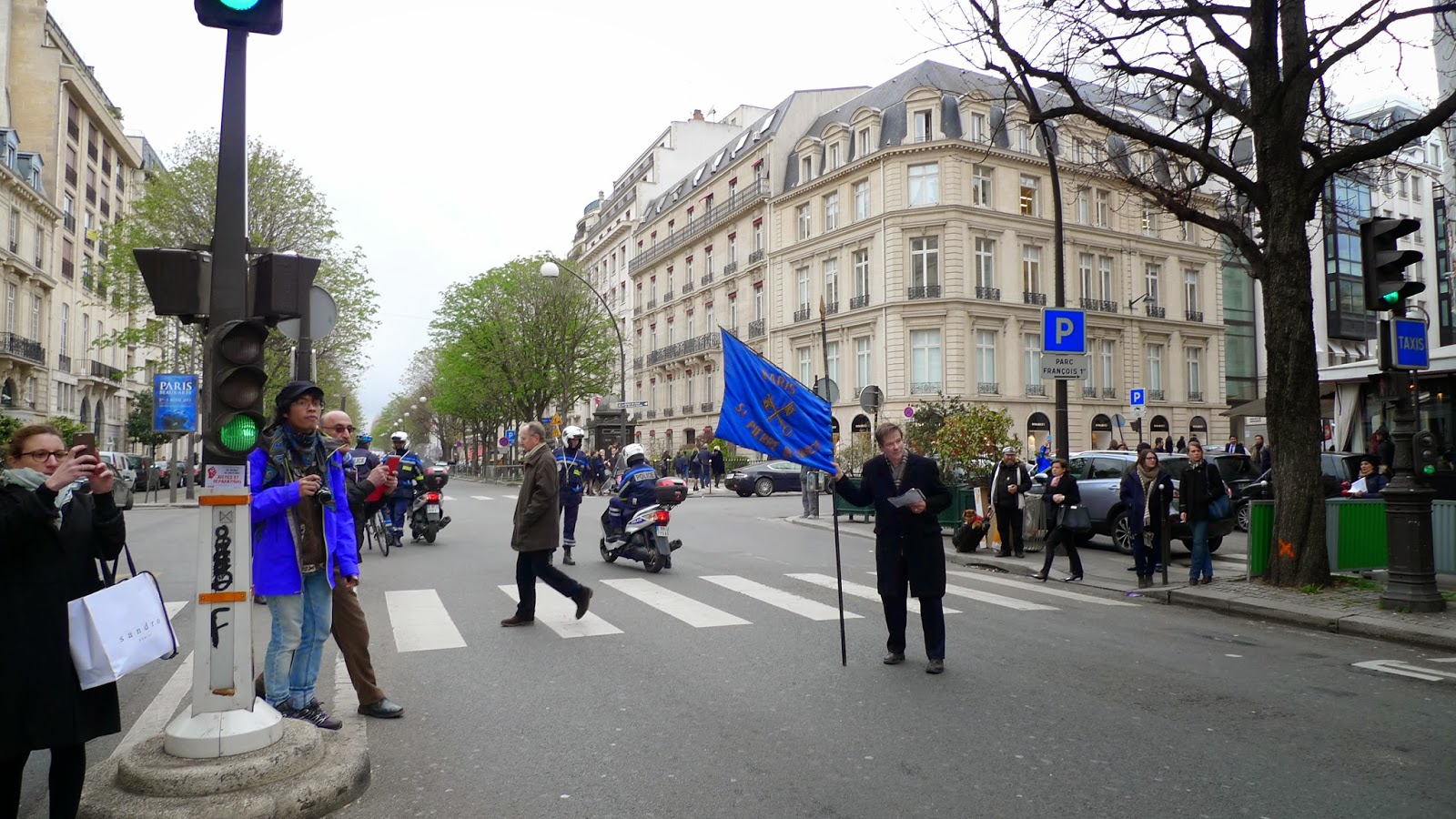 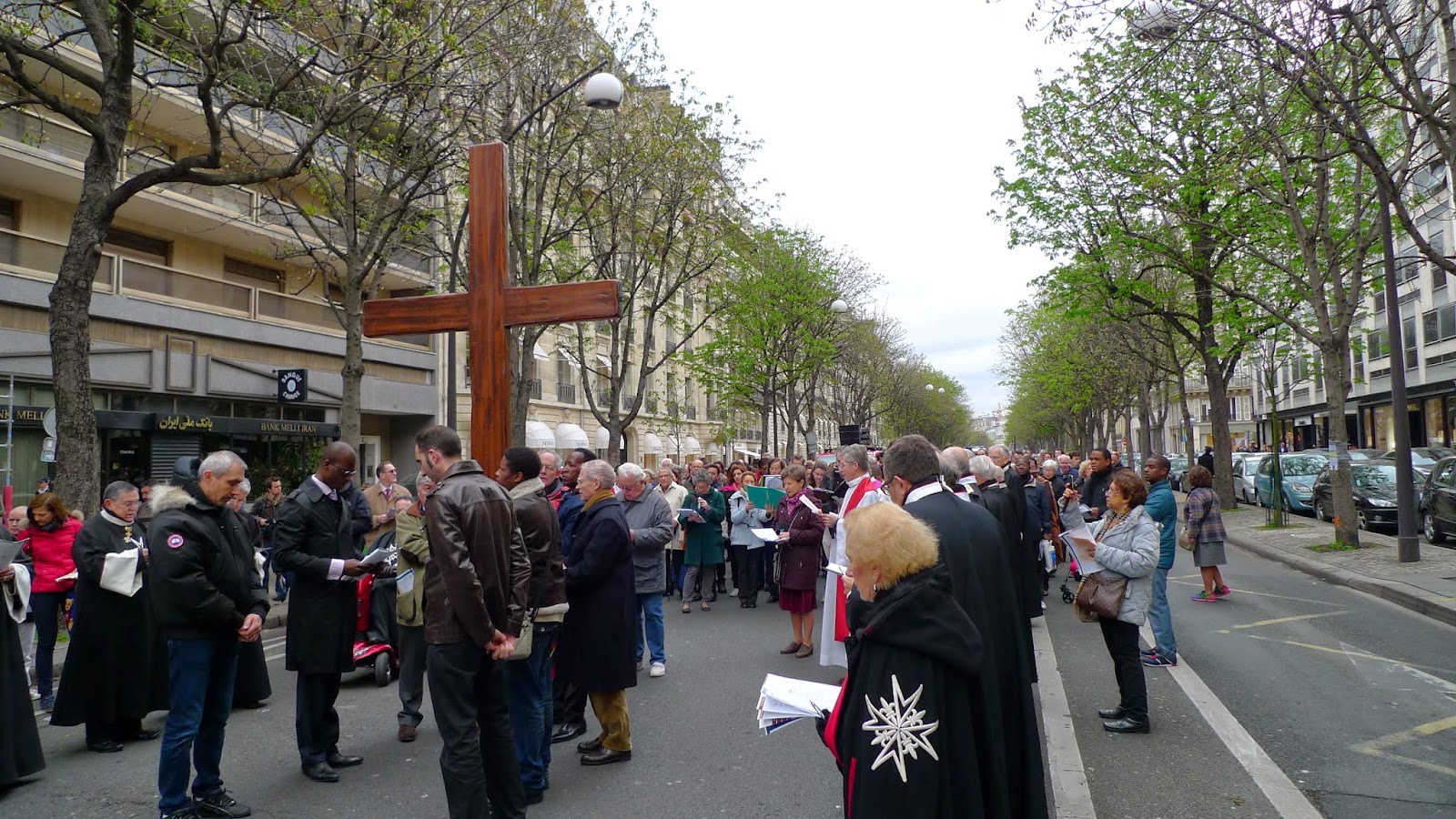 6th Station
Reading: 2 Cor. 4: 6 - 7*
6* For God who said, “Let light shine out of darkness,” has shone in our hearts to bring to light the knowledge of the glory of God on the face of [Jesus] Christ.d
The Paradox of the Ministry.7* But we hold this treasure* in earthen vessels, that the surpassing power may be of God and not from us. 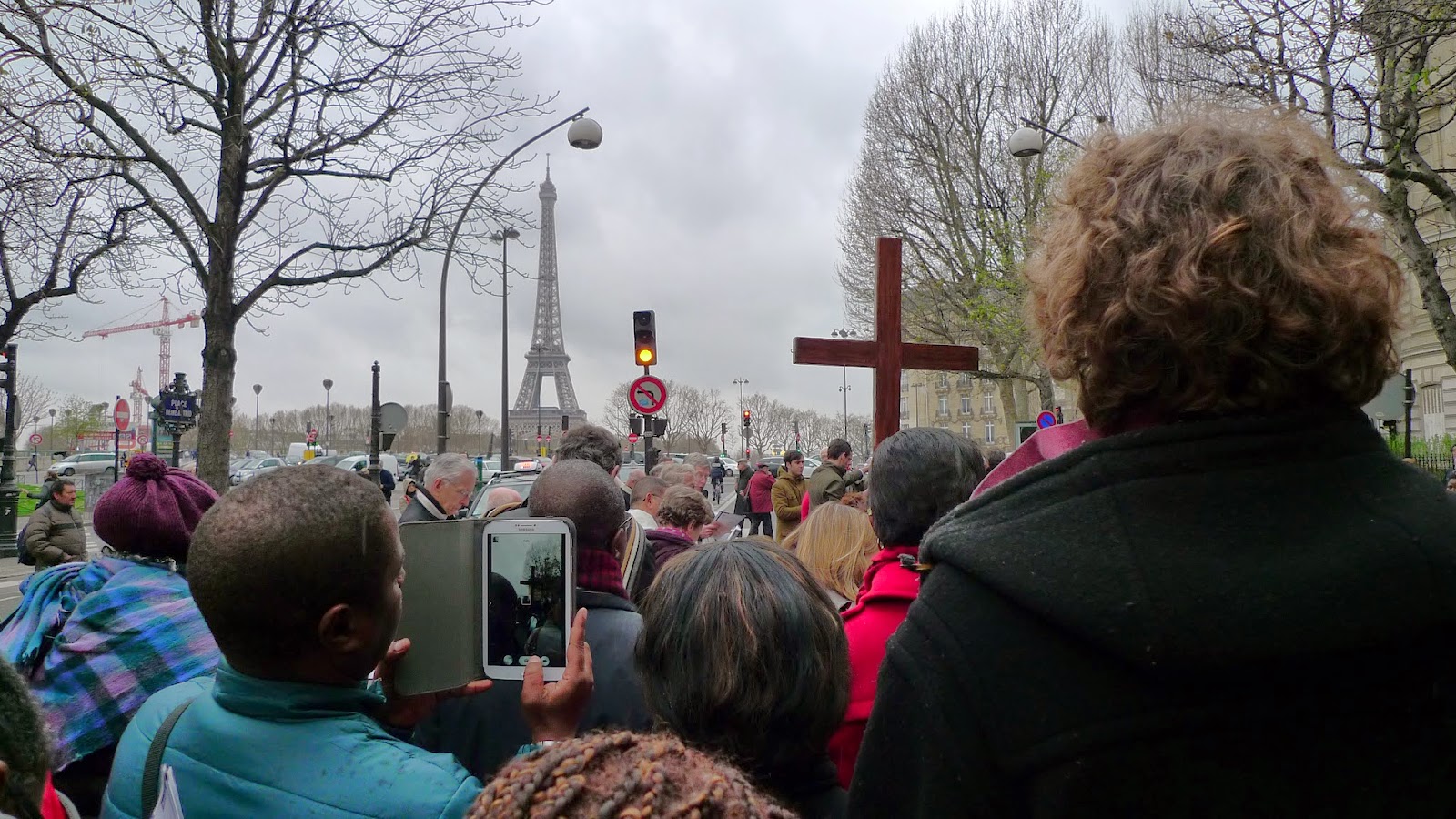 7th Station
Reading: Psalm 142: 3 - 6 *
Before him I pour out my complaint,
tell of my distress in front of him.
4When my spirit is faint within me,a
you know my path.b
As I go along this path,
they have hidden a trap for me.c
5I look to my right hand to seed
that there is no one willing to acknowledge me.
My escape has perished;
no one cares for me.
6I cry out to you, LORD,
I say, You are my refuge,e
my portion in the land of the living. 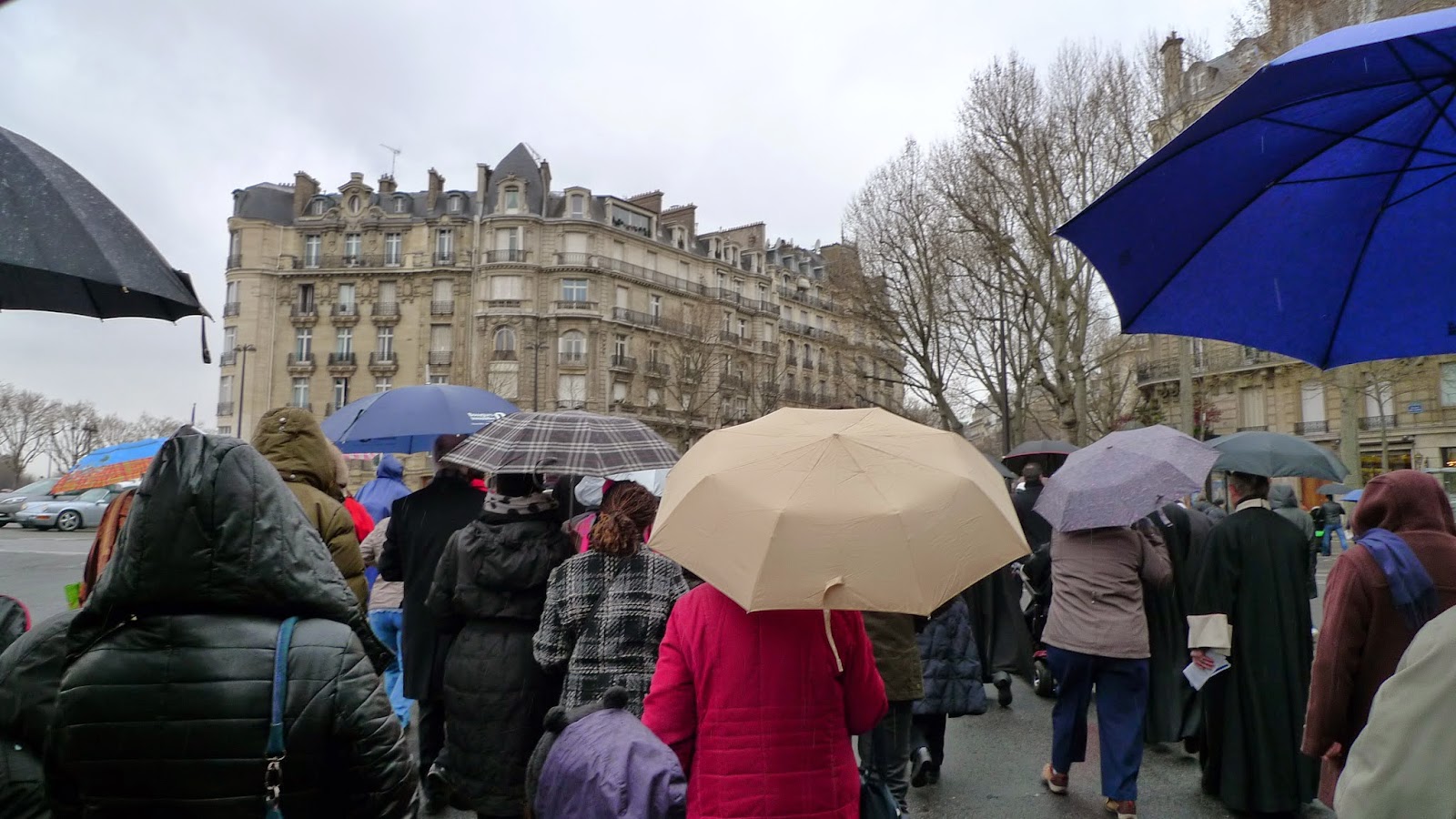 Undeterred by the rainfall, the devotees continue on with the Stations of the Cross. 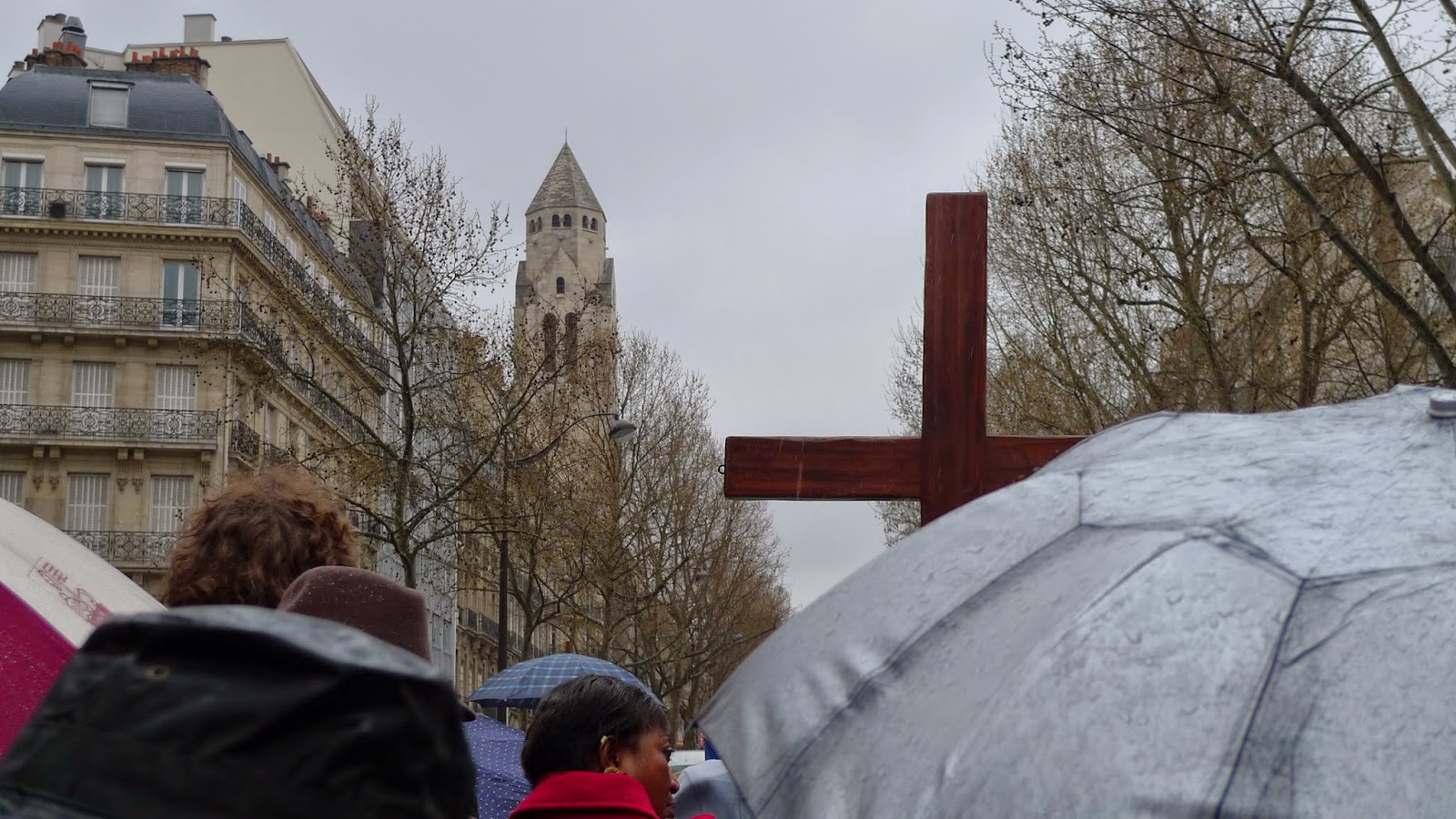 8th Station
Reading: Romans 8: 18 - 21*
18I consider that the sufferings of this present time are as nothing compared with the glory to be revealed for us.n19For creation awaits with eager expectation the revelation of the children of God;20for creation was made subject to futility, not of its own accord but because of the one who subjected it,o in hope21that creation itself would be set free from slavery to corruption and share in the glorious freedom of the children of God.p 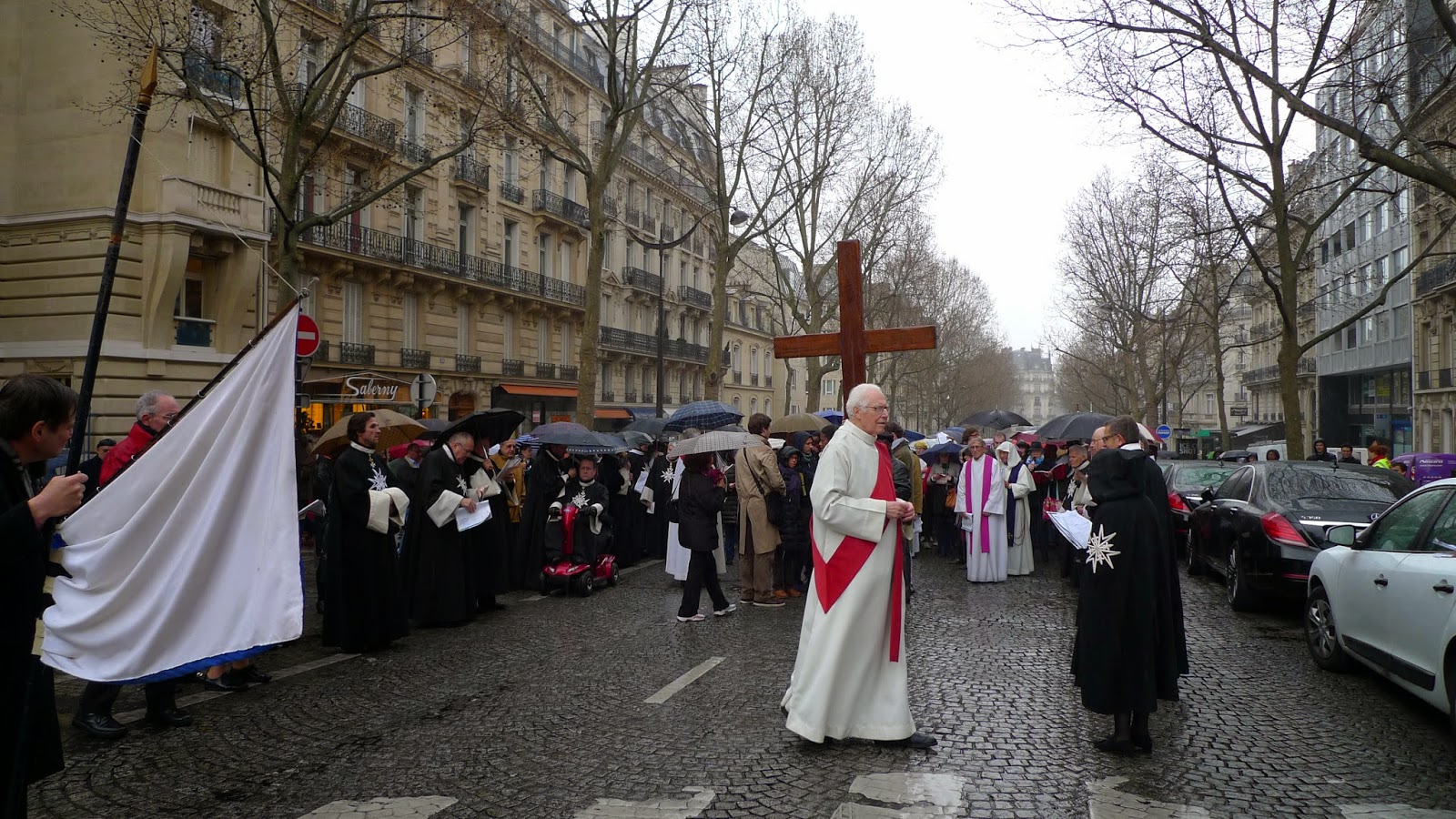 9th Station
Reading: Psalm 142: 7 - 10*
Listen to my cry for help,
for I am brought very low.g
Rescue me from my pursuers,
for they are too strong for me.
8Lead my soul from prison,
that I may give thanks to your name.
Then the righteous shall gather around me*
because you have been good to me...
10th Station
Reading: Matt 6: 24 - 26, 33*
24o No disciple is above his teacher, no slave above his master.25It is enough for the disciple that he become like his teacher, for the slave that he become like his master. If they have called the master of the house Beelzebul,* how much more those of his household!
Courage under Persecution.
26p “Therefore do not be afraid of them. Nothing is concealed that will not be revealed, nor secret that will not be known.*
But seek first the kingdom (of God) and his righteousness,* and all these things will be given you besides.
11th Station
Reading: Luke 23: 42 - 43*
42Then he said, “Jesus, remember me when you come into your kingdom.”w43He replied to him, “Amen, I say to you, today you will be with me in Paradise.”x 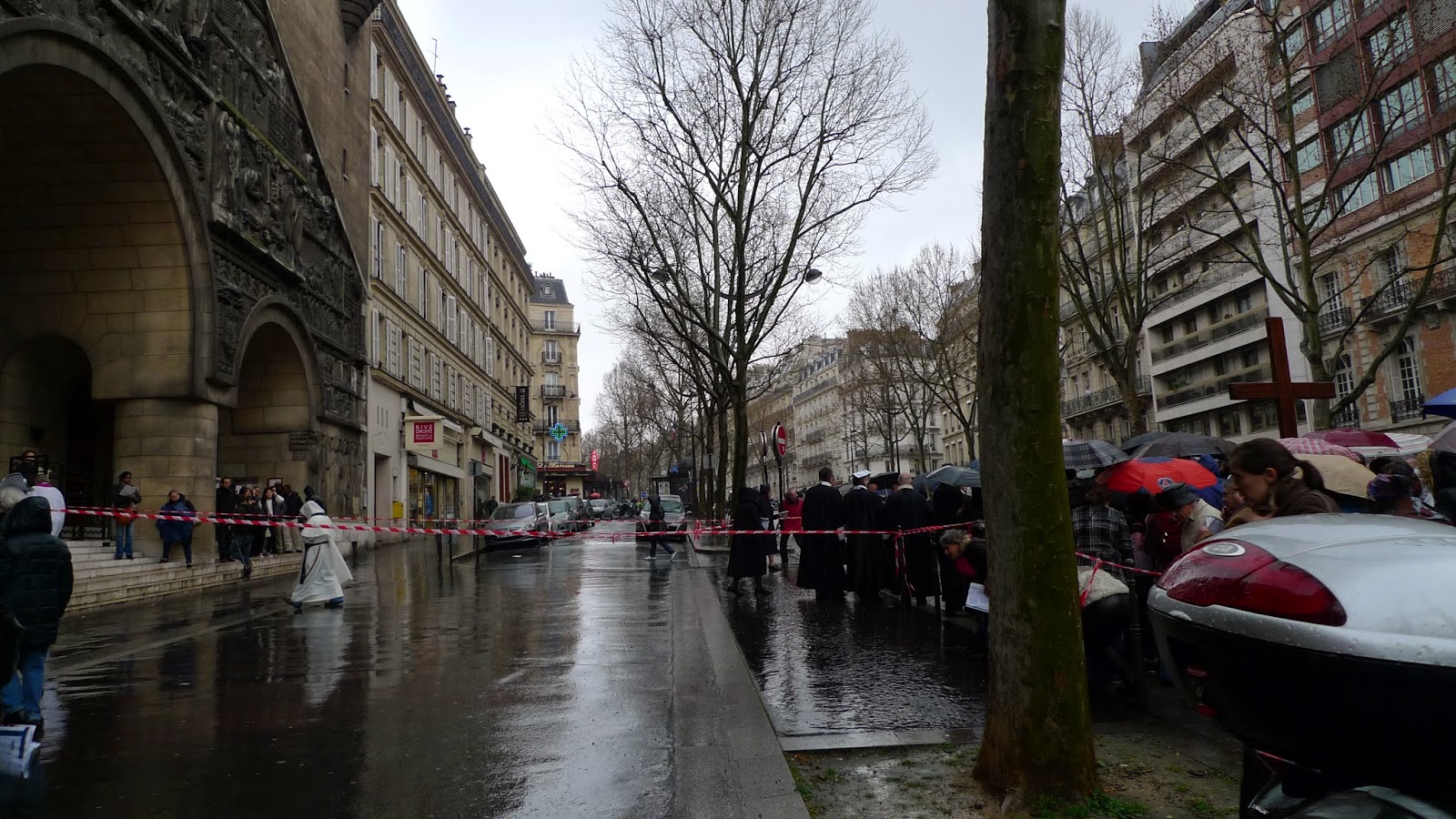 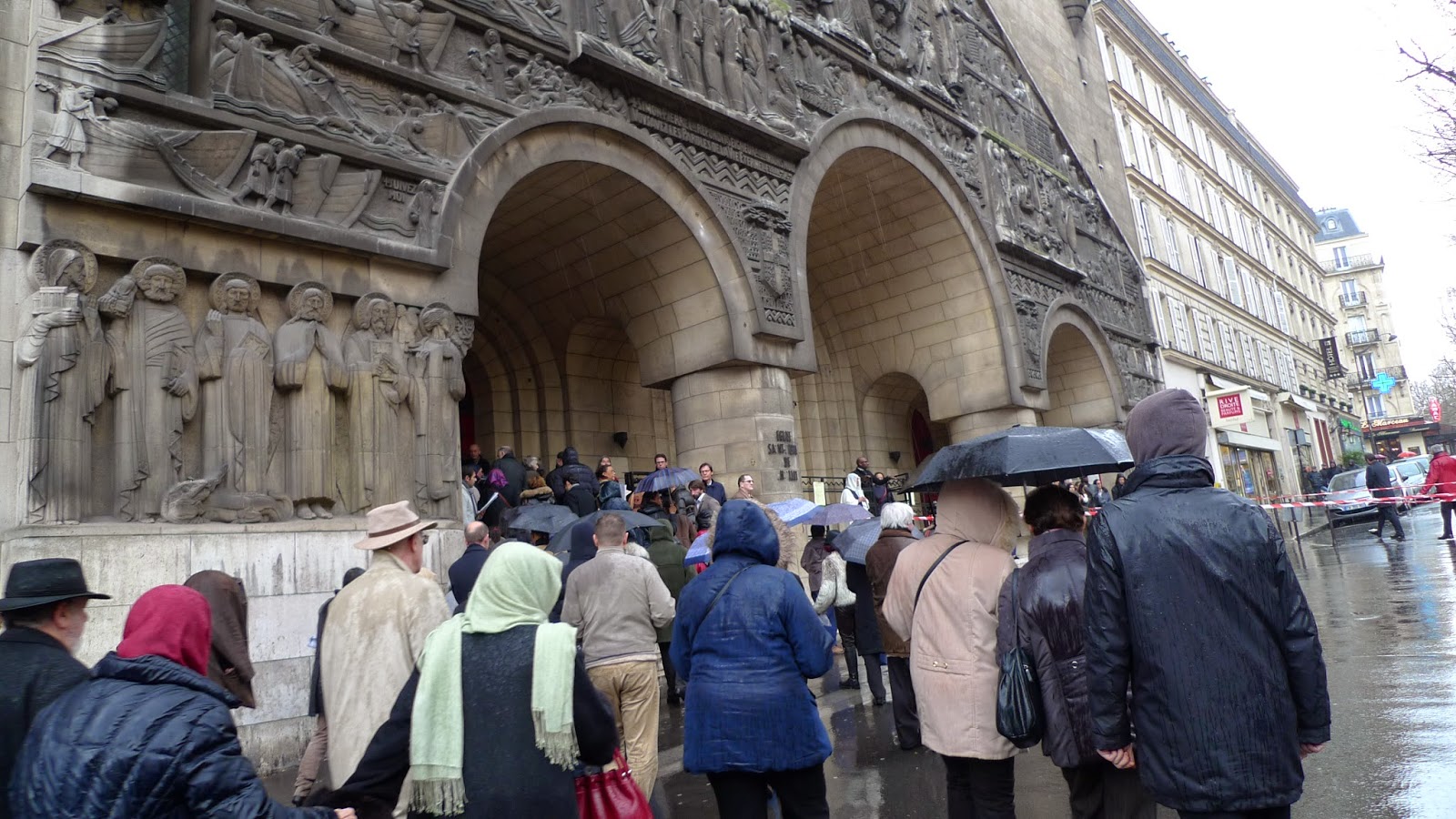 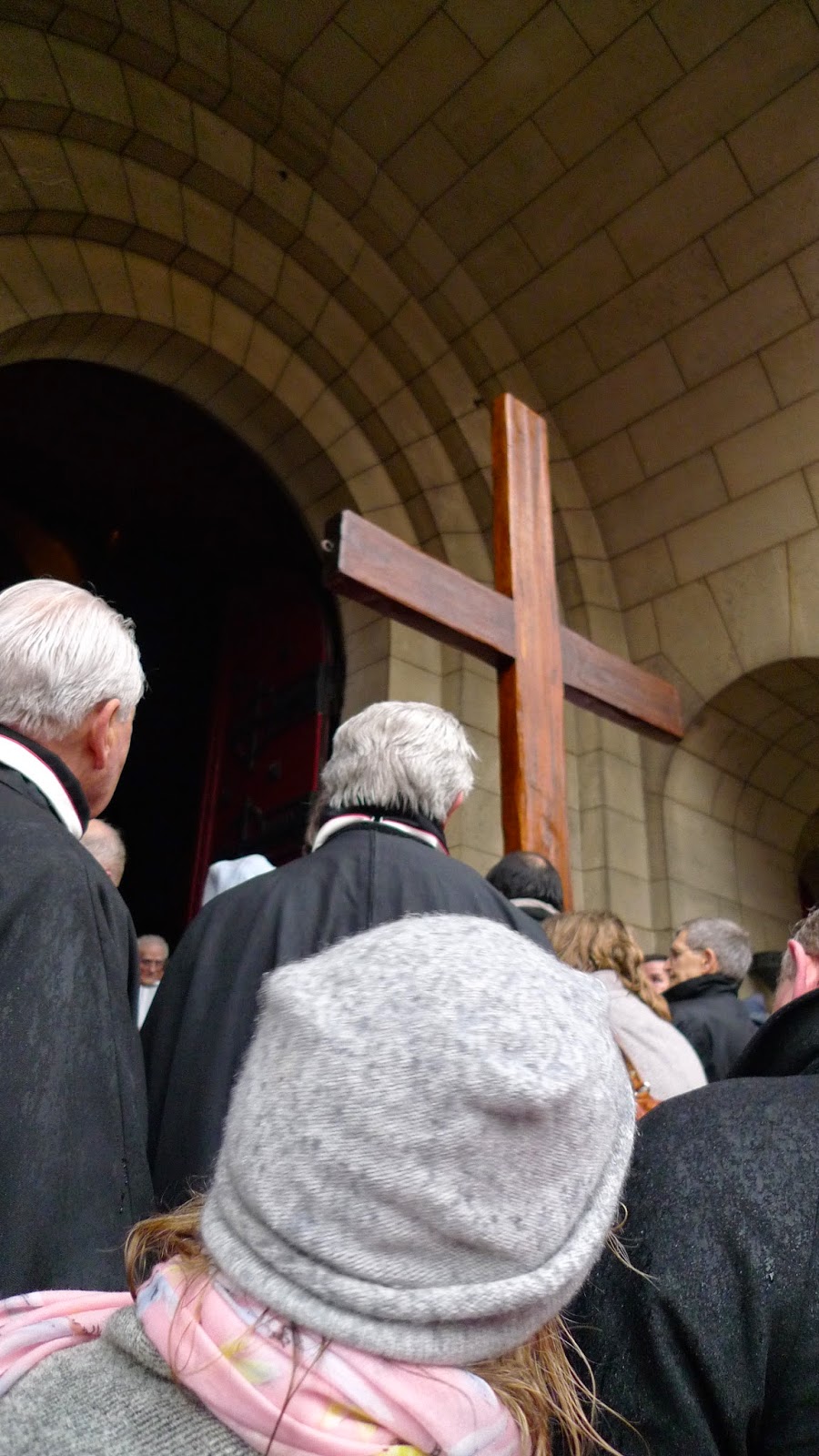 13th Station
Reading: Romans 8: 28, 31 - 32*
God’s Indomitable Love in Christ.28* We know that all things work for good for those who love God,* who are called according to his purpose.
31* What then shall we say to this? If God is for us, who can be against us?x32He who did not spare his own Son but handed him over for us all, how will he not also give us everything else along with him? 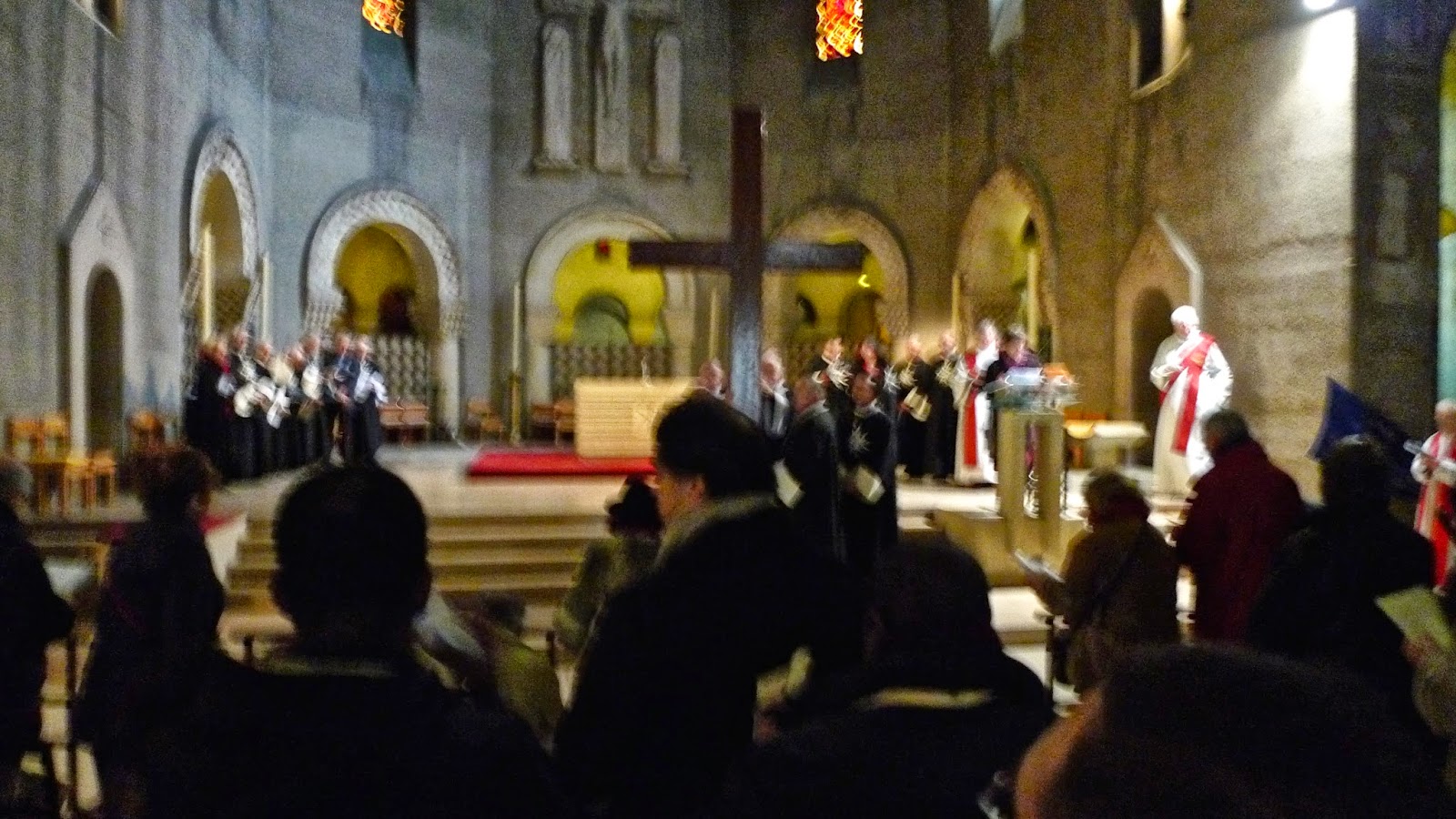 14th Station
Reading: Romans 8: 38 - 39*
38For I am convinced that neither death, nor life, nor angels, nor principalities, nor present things,* nor future things, nor powers,d39nor height, nor depth,* nor any other creature will be able to separate us from the love of God in Christ Jesus our Lord. 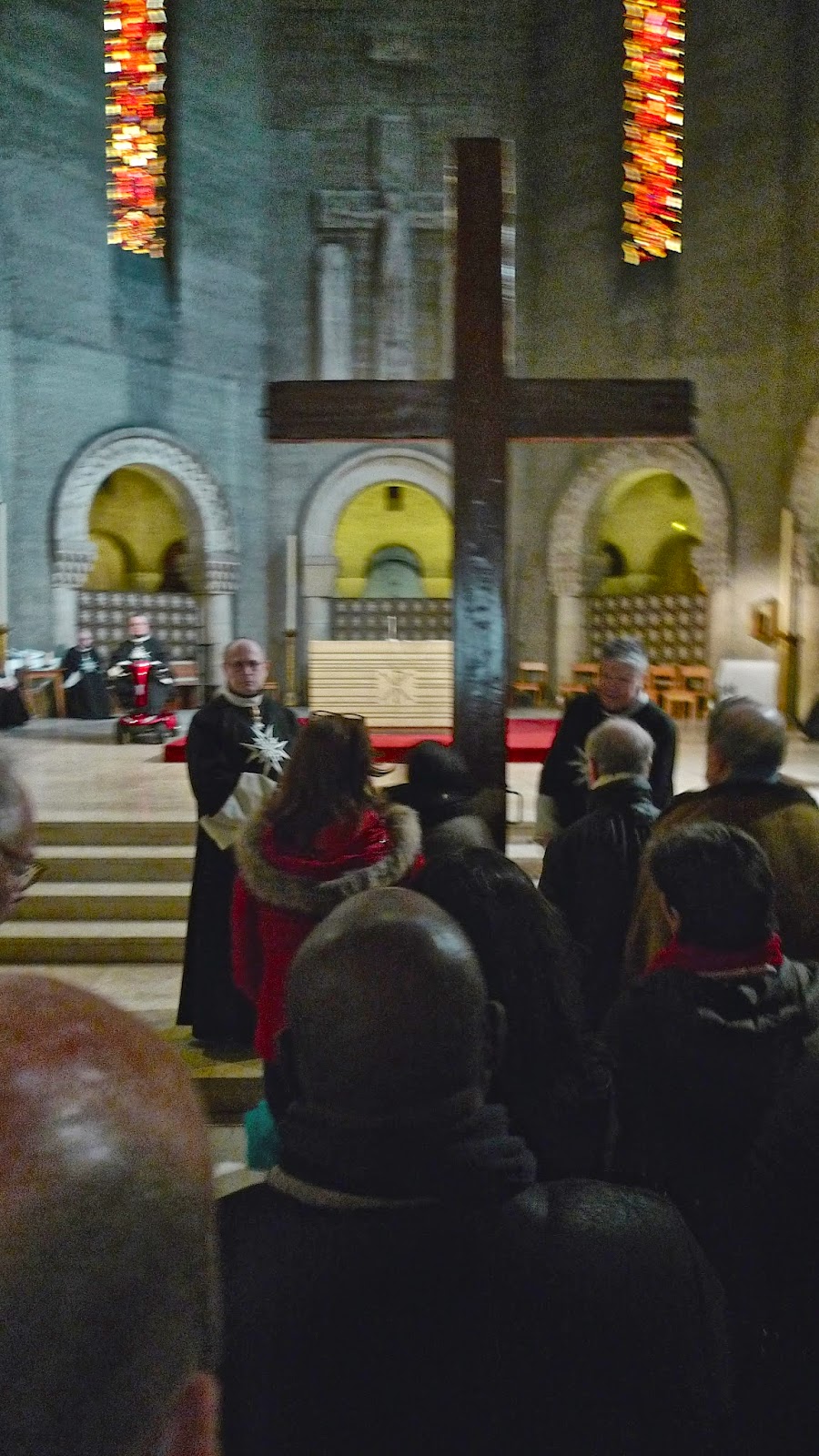 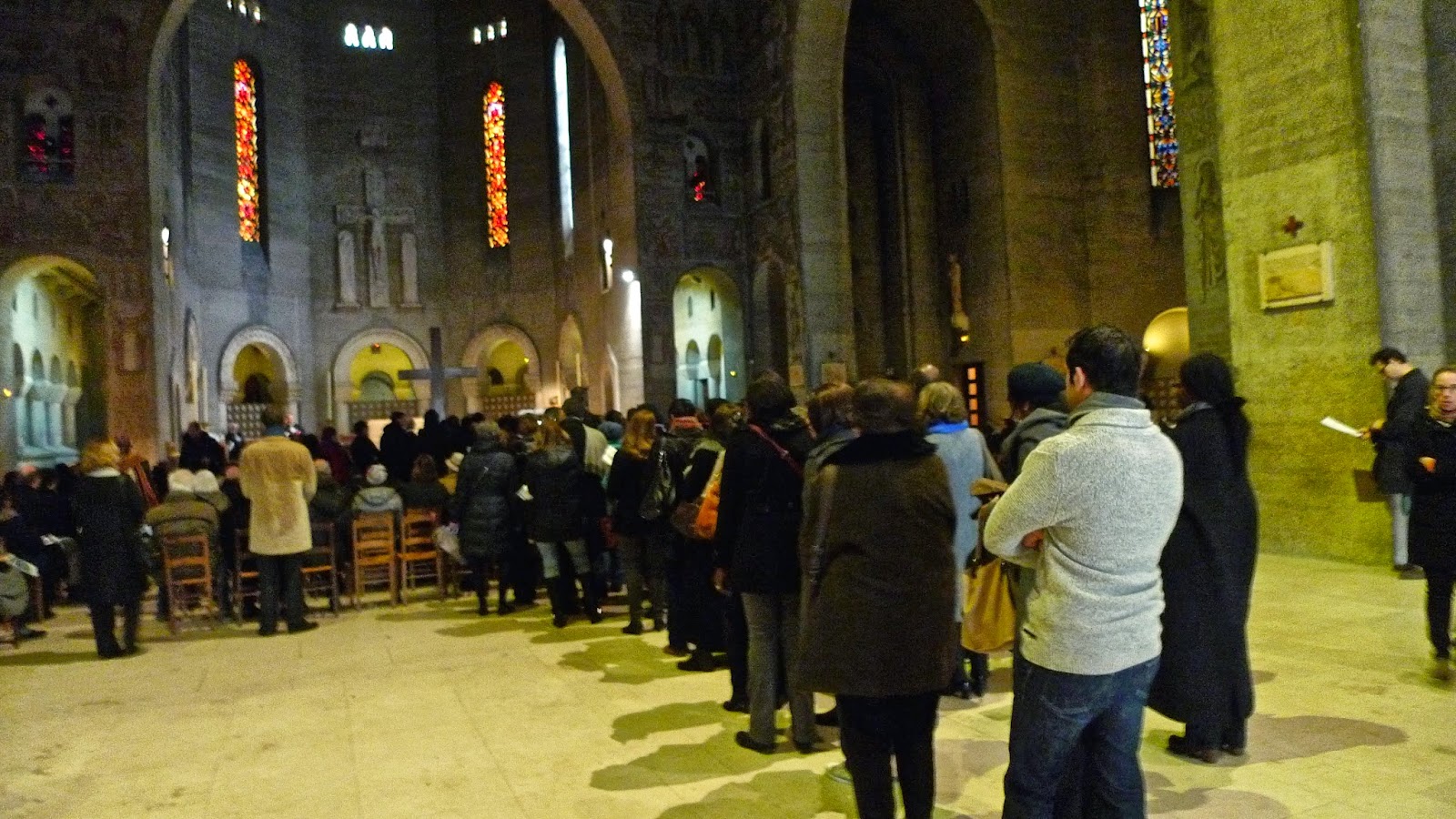 The Veneration of the Cross followed. 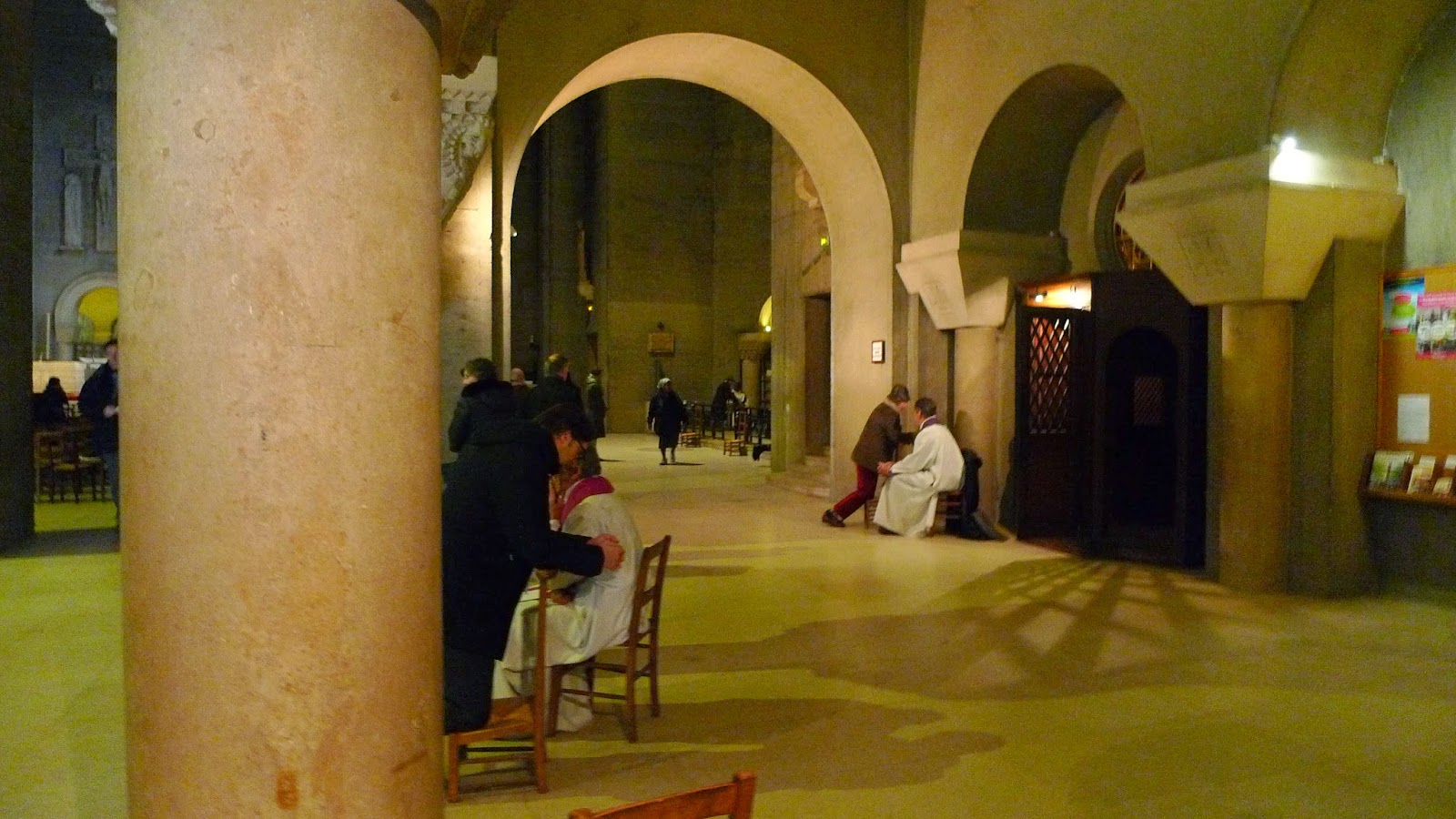 Lines for confession formed, after the Veneration of the Cross. 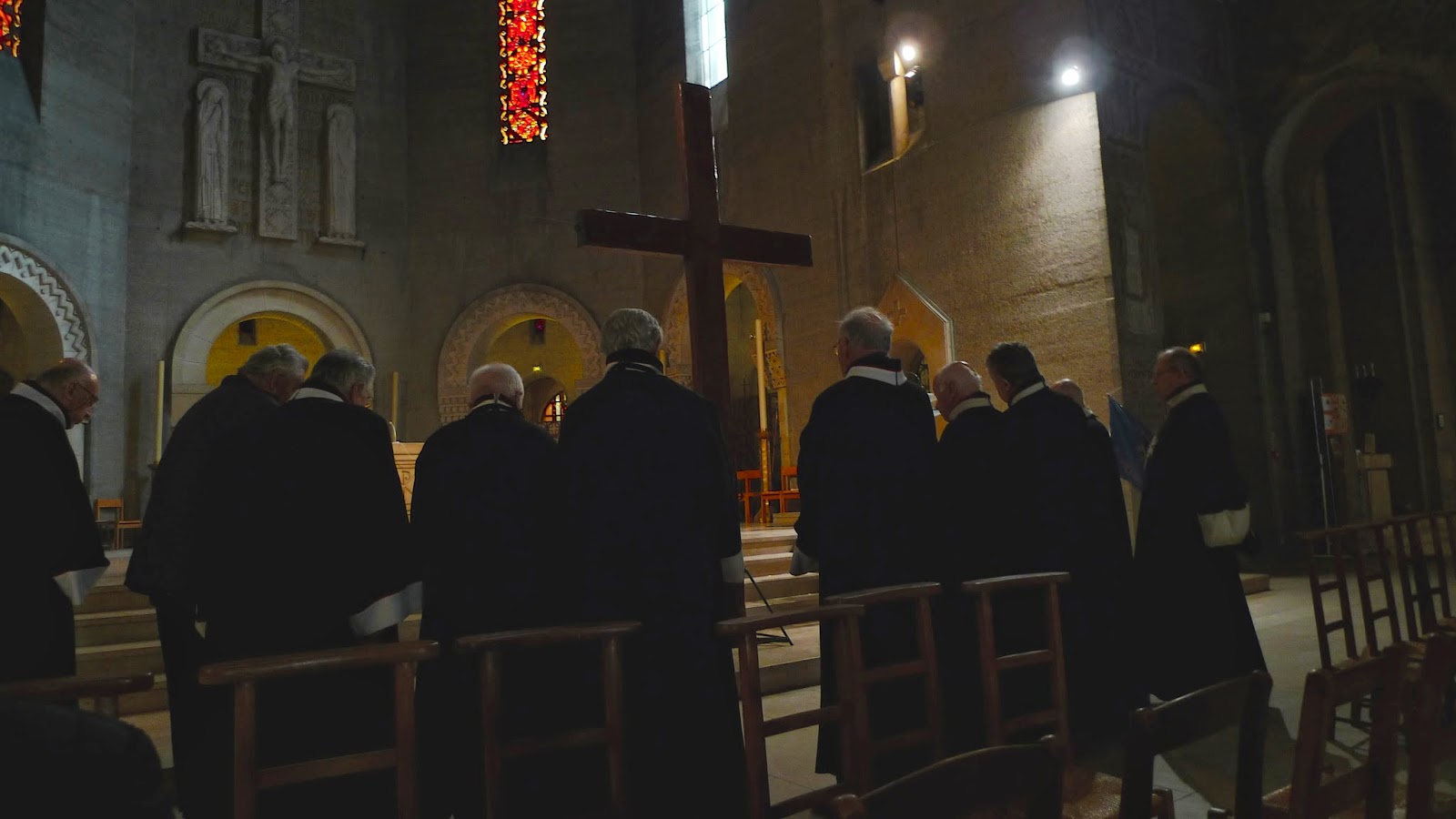 The members of the Order of Malta concluded with a closing prayer.

The crowd that attended this Good Friday commemoration of the suffering of our Lord Jesus, came from all walks of life - French, immigrants, tourists, professionals, students, the young and old. Jesus begged the question "Who do you say I am?" Mark 8:29, from of Peter. Who do we say Jesus is?

This was a time to spend to meditate on God's love (John 3:16), that He gave his only Son to redeem us through His life, passion, and death. Easter, the resurrection of our Lord from death to life, is the gift of eternal life that we receive from our Lord, in obedience to His Father's will.

May God's blessings be upon us this Easter, and for all the days of our lives.
Posted by yolanda at 11:16