Theravada derives from the school of Buddhism based on the "Tiptaka" or the "Pali Canon," which - according to scholars - is based on the earliest, surviving records pertaining to the teachings of Buddha.

In Southeast Asia - in Thailand, Myanmar, Burma, Cambodia, Laos, and in Sri Lanka, as well, this has been the predominant religion in practice, with Theravada Buddhists numbering over a hundred million, all over the world.

When in Thailand, the iconic religious structures to visit are the Buddhist temples - Wat. There are over 30,000 of these structures that showcase Thai art and architecture. They are temple compounds consisting of several buildings with different functions.

The most common architectural design is in the Rattanakosin style. But, one can discover temples with a contemporary design, too.

In the Chiang Rai province, which is a three-hour drive from the city of Chiang Mai in Northern Thailand, there is a temple - modern in design, that stands out and garners beautiful responses among the visitors. This temple is called the Wat Rong Khun. It has come to be known as the "white temple." It is privately owned by Chalermchai Kositpipat, who also designed and and supervised the construction of the wat. He opened it to the public in 1997, with free admission. 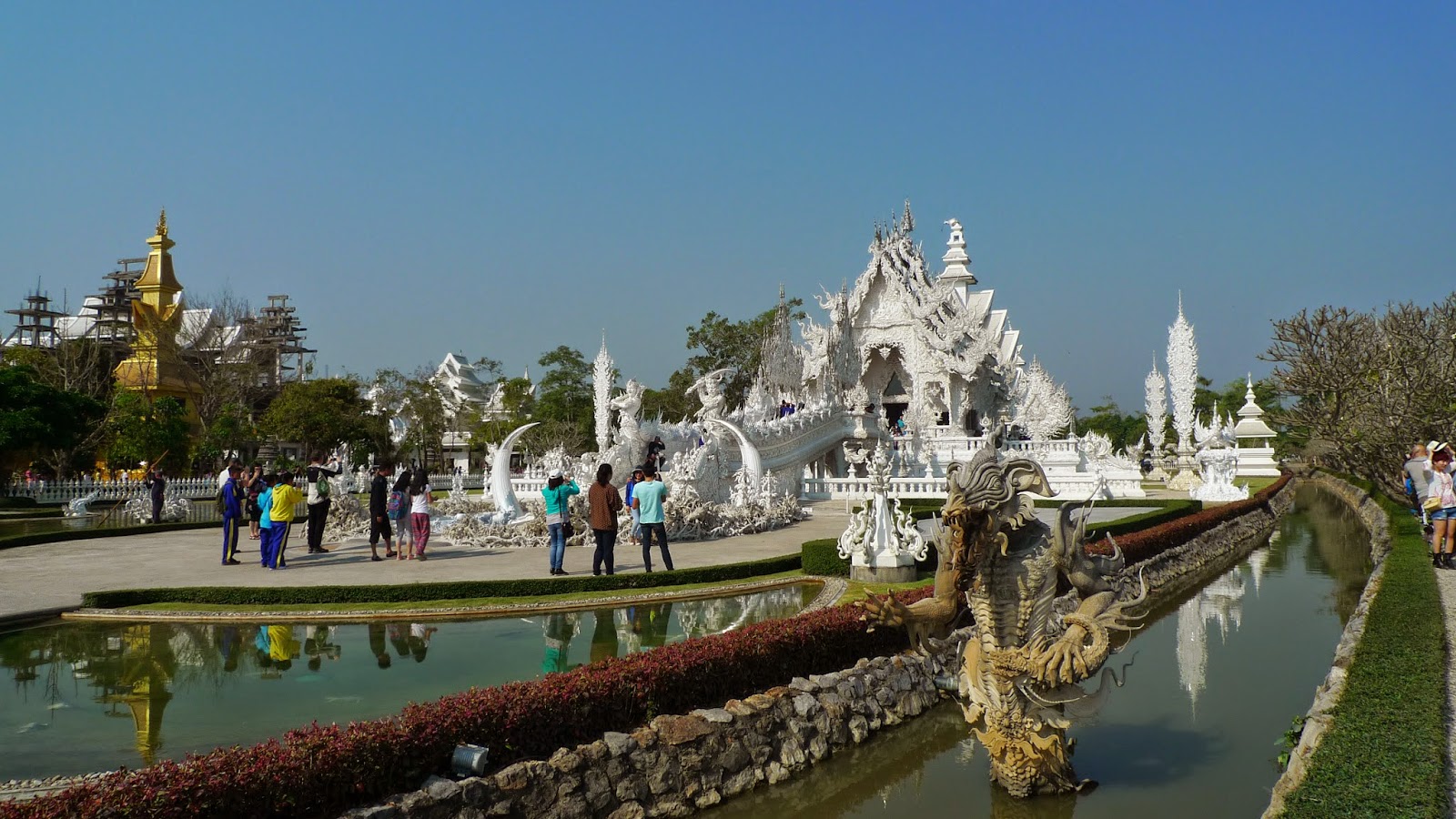 This temple is contemporary in design but traditional in function. There is a bit of history about this place.

Chalermchai Kositpipat was a local artist from Chiang Rai. when the original Wat Rhong Khun fell into disrepair by the end of the 20th century, Kositpipat offered to take on the project of rebuilding it with his own funds. So far, it has cost him THB40 million, which is equivalent to about US$ 1,227,560.400.

His vision for this place is to make it a learning center for those interested to know about the teachings of Buddha. This is his life offering to his lord, Buddha, in the belief that it will give him immortal life.

There is ongoing work in the temple grounds. The project is expected to be completed in 2070. Though admission is free, donations are accepted, but not to exceed THB10,000. This is to safeguard his work from undue influences or demands that may be imposed by big donors.

By the time the project is completed, the wat compound will house nine buildings, including the buildings that exist at the present time - the ubosot (the main building);  a hall of relics; an art gallery, and the living quarters for the monks. 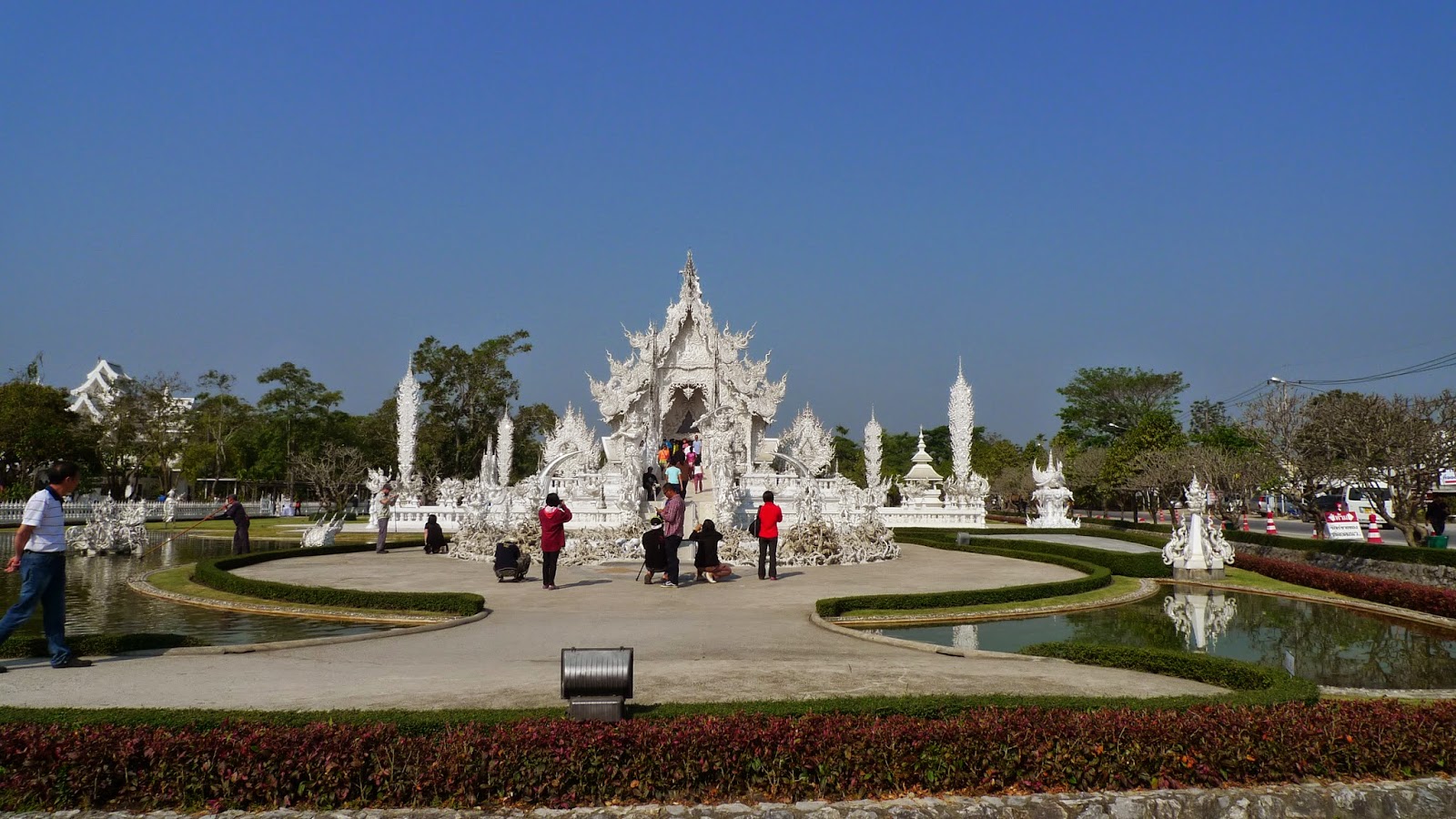 The main building is white in color where the design lines are traced with mirrored glass tiles, in linear mosaic fashion. It is in keeping with the traditional, classic Thai architecture with the use of the three-tiered roof, decorated with Naga serpents. (Naga, in Sanskrit and Pali is a word that refers to a deity or a being who has taken the form of a very great  snake.) 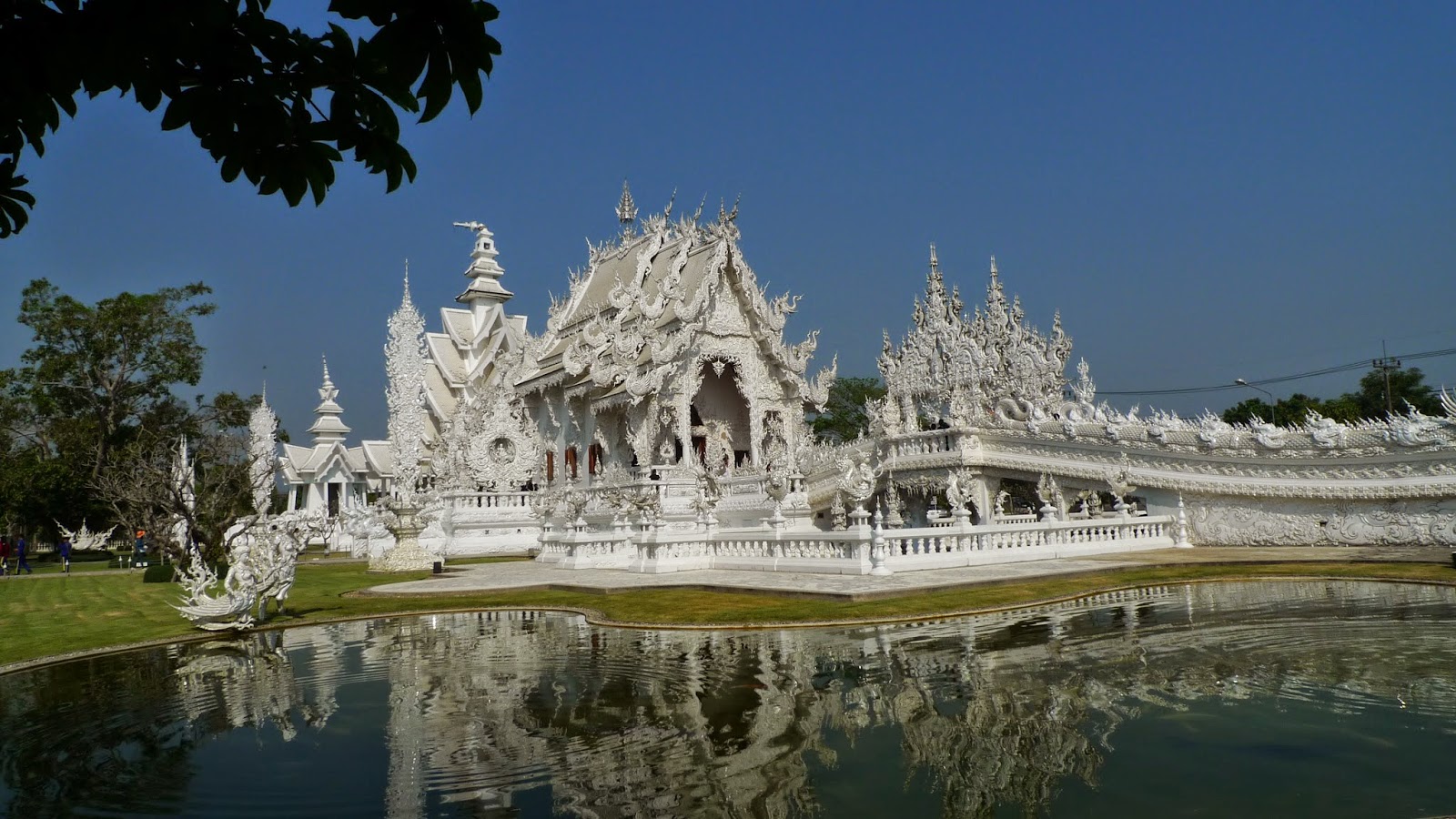 To get to the main building, there is a bridge of "the cycle of rebirth" to take, over a lake. 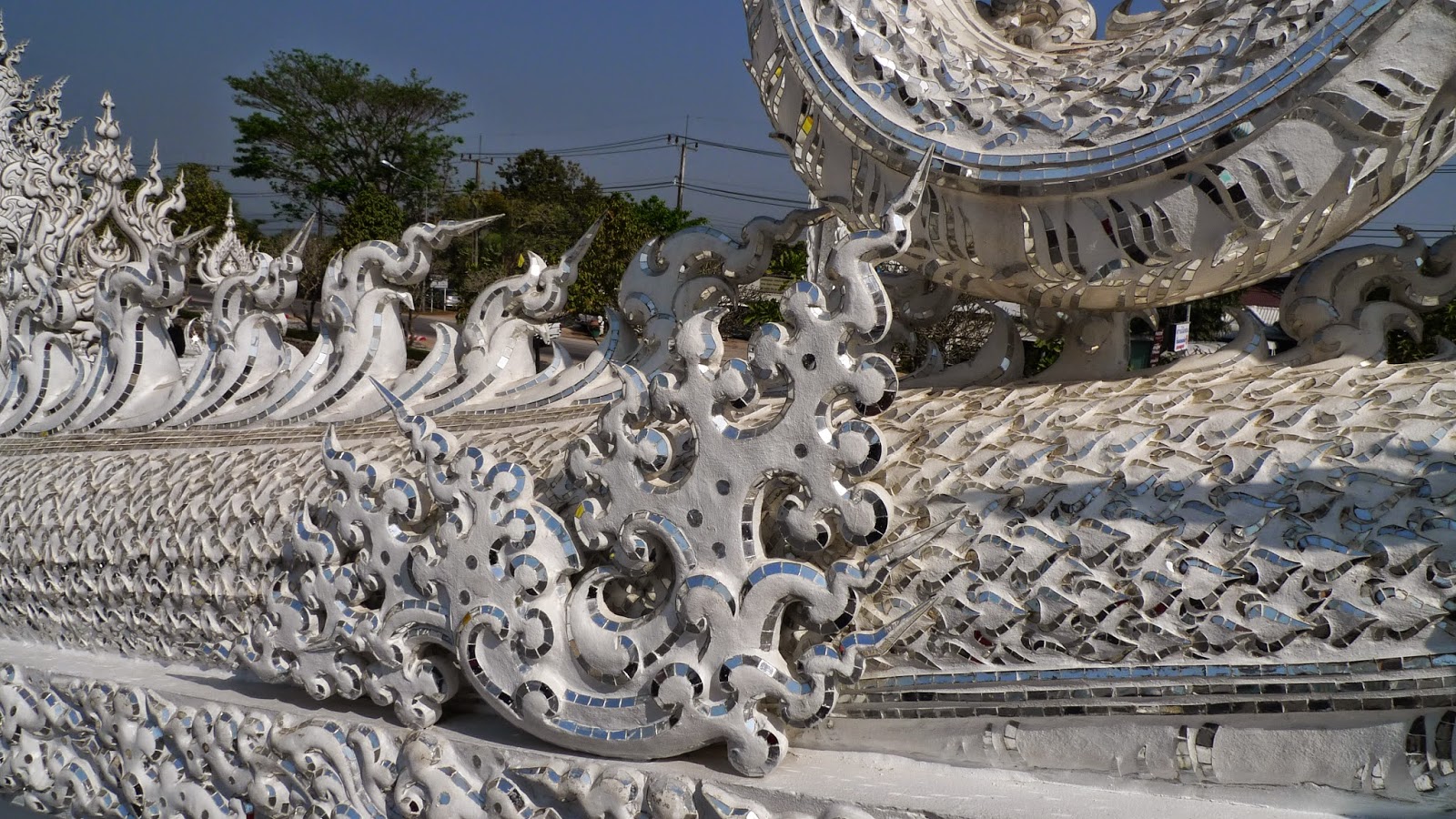 Delicate designs along the bridge as defined by the use of small mirrored, glass tiles 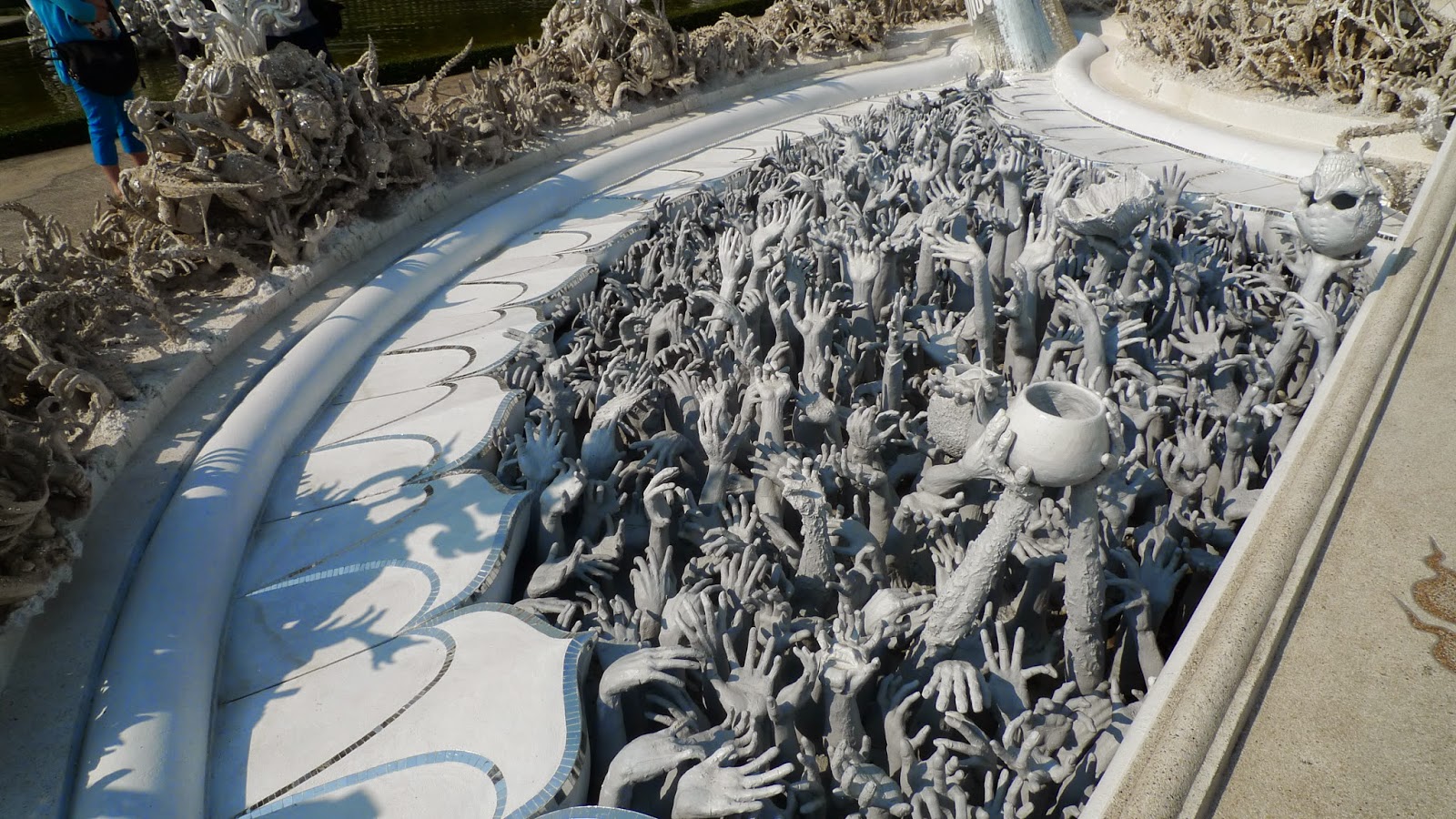 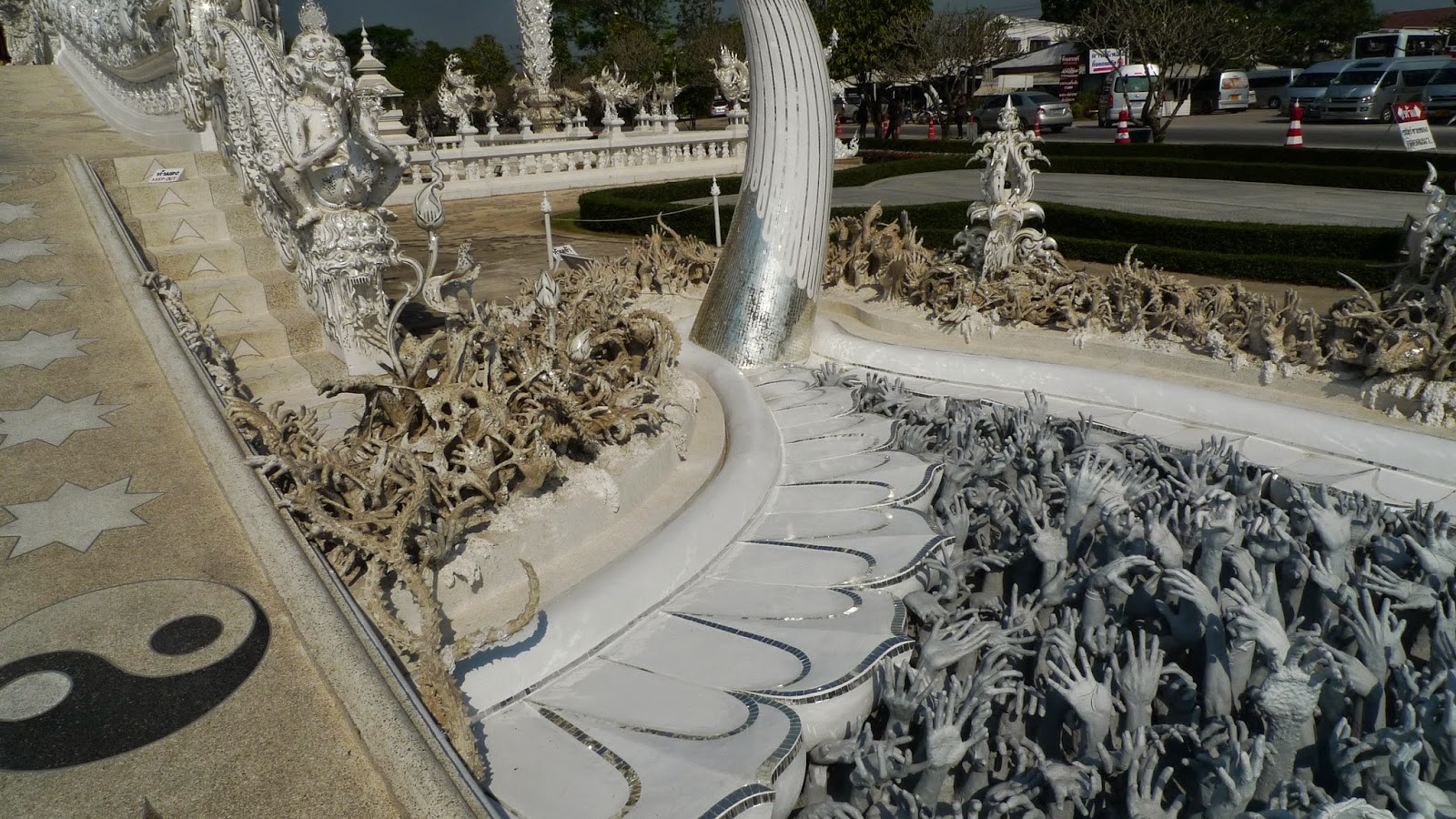 Before the bridge, on both sides, are symbols. The hands represent man's unrestrained desires, and the bridge - as one goes through it in his life, is the path to happiness as man foregoes his temptations for greed and desire. 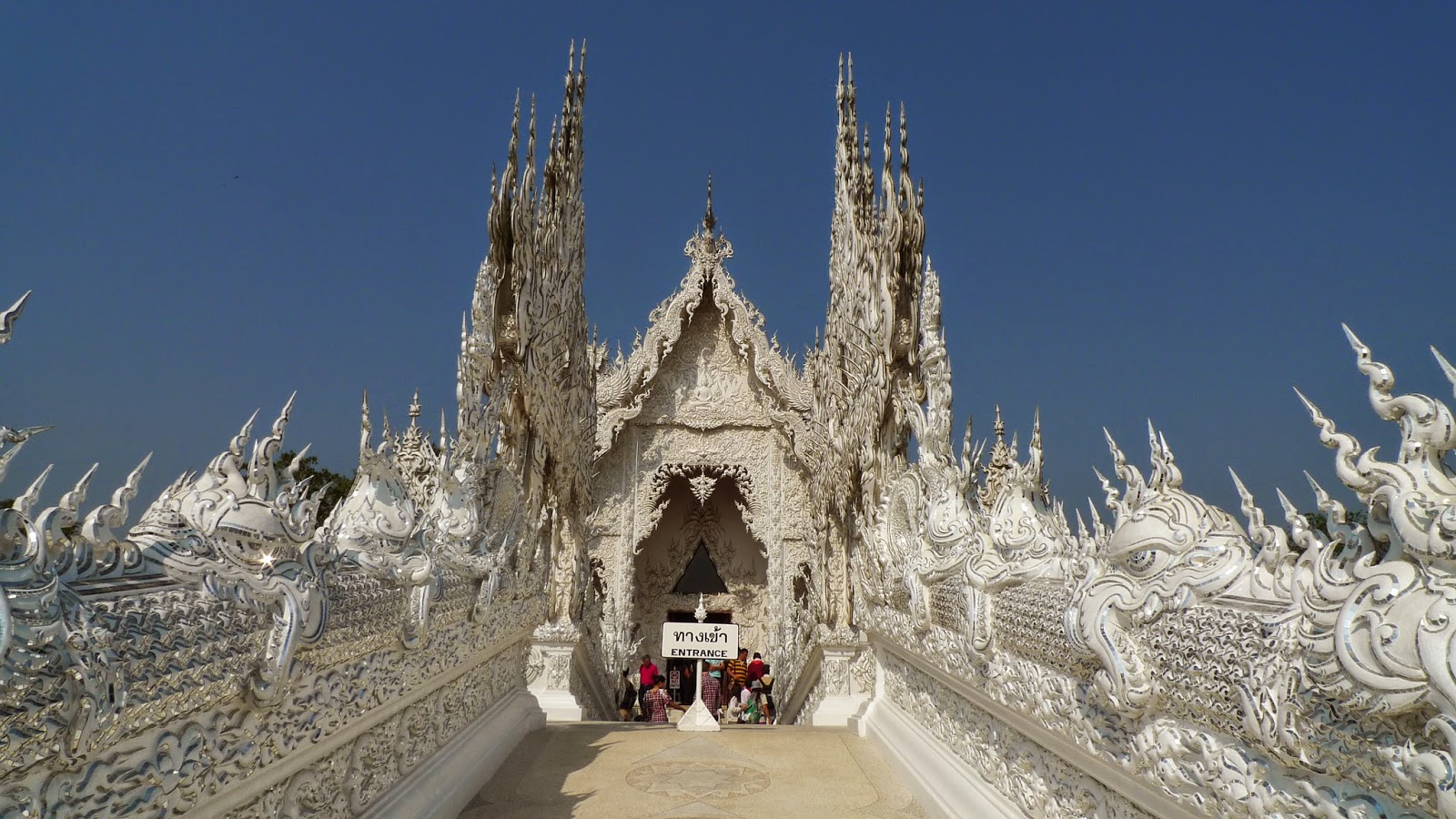 From the bridge, one approaches the "gate of heaven", guarded by two creatures who represent death and Rahu. (Rahu, is the mythical God of darkness.) 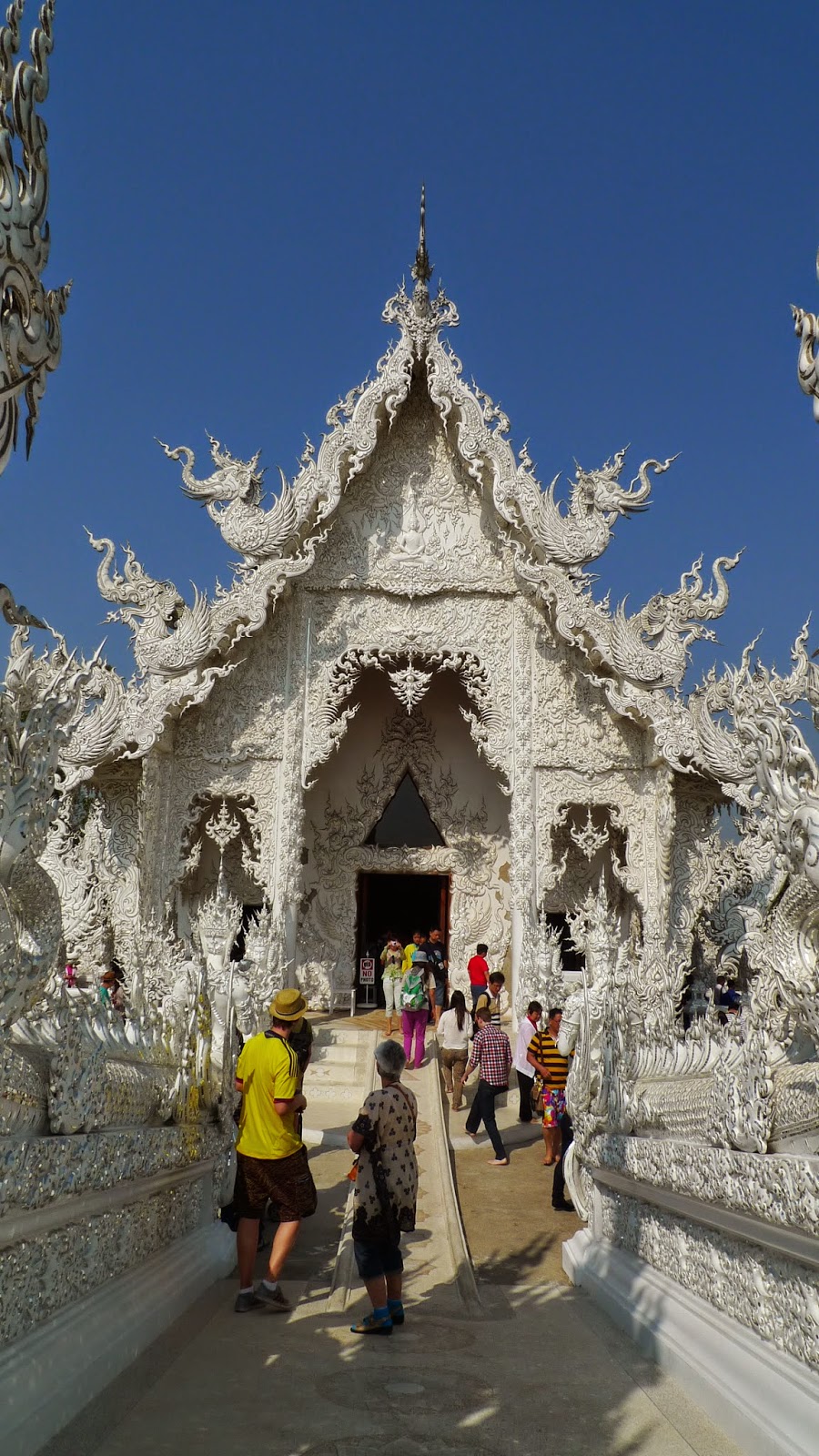 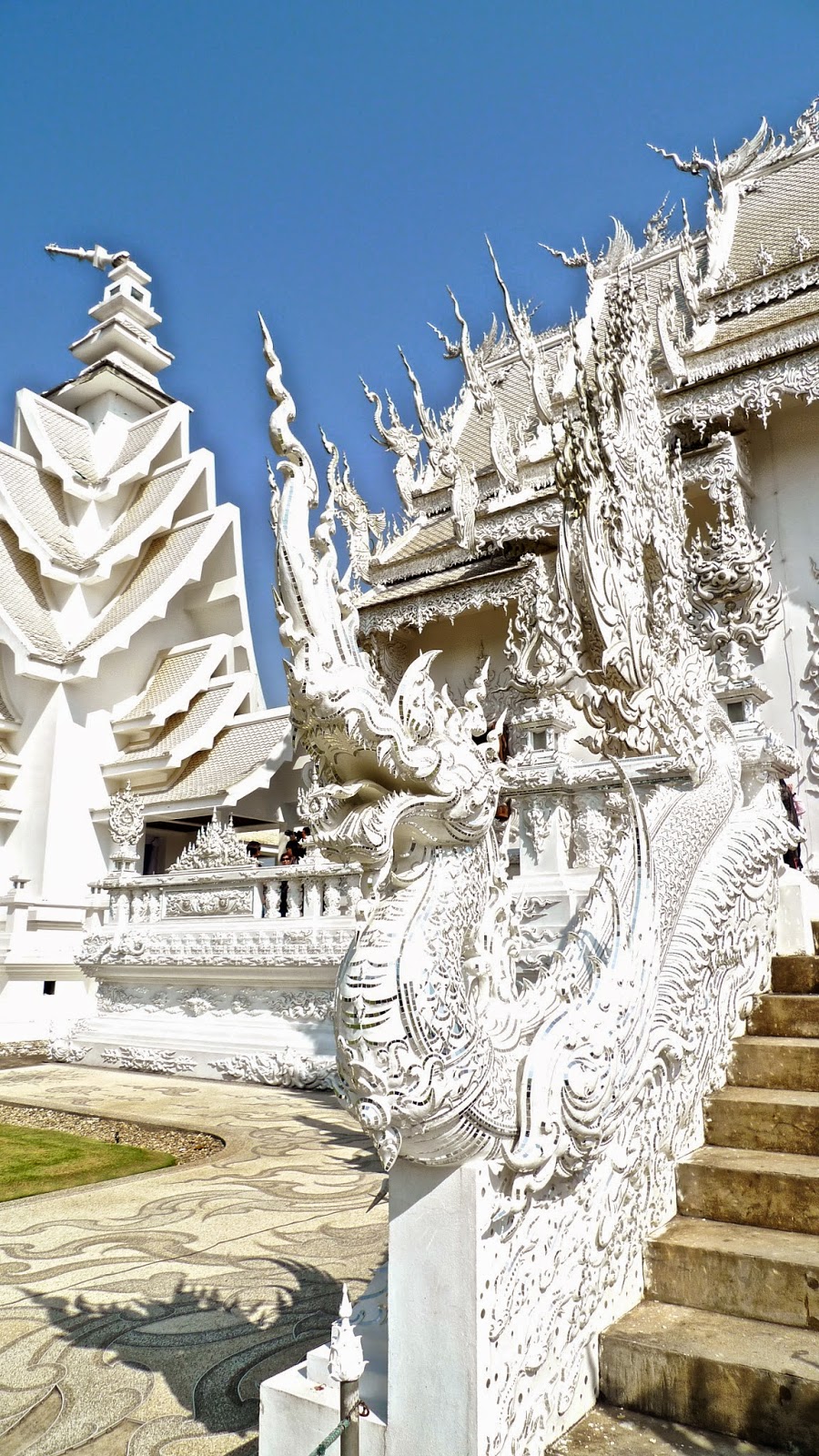 After the steps leading up to the floor level of the temple, one has to remove his footwear and leave them on the racks provided on the side.

Picture taking was off limits inside the temple. Here is what it was like...the backdrop for the standing Buddha were murals in fiery colors, depicting demon faces with western iconic characters, as well as the "images of nuclear warfare, terrorist attacks, and oil pumps" to bring home the idea about the negative impact humans were having on the world. The moral message is "people are wicked." 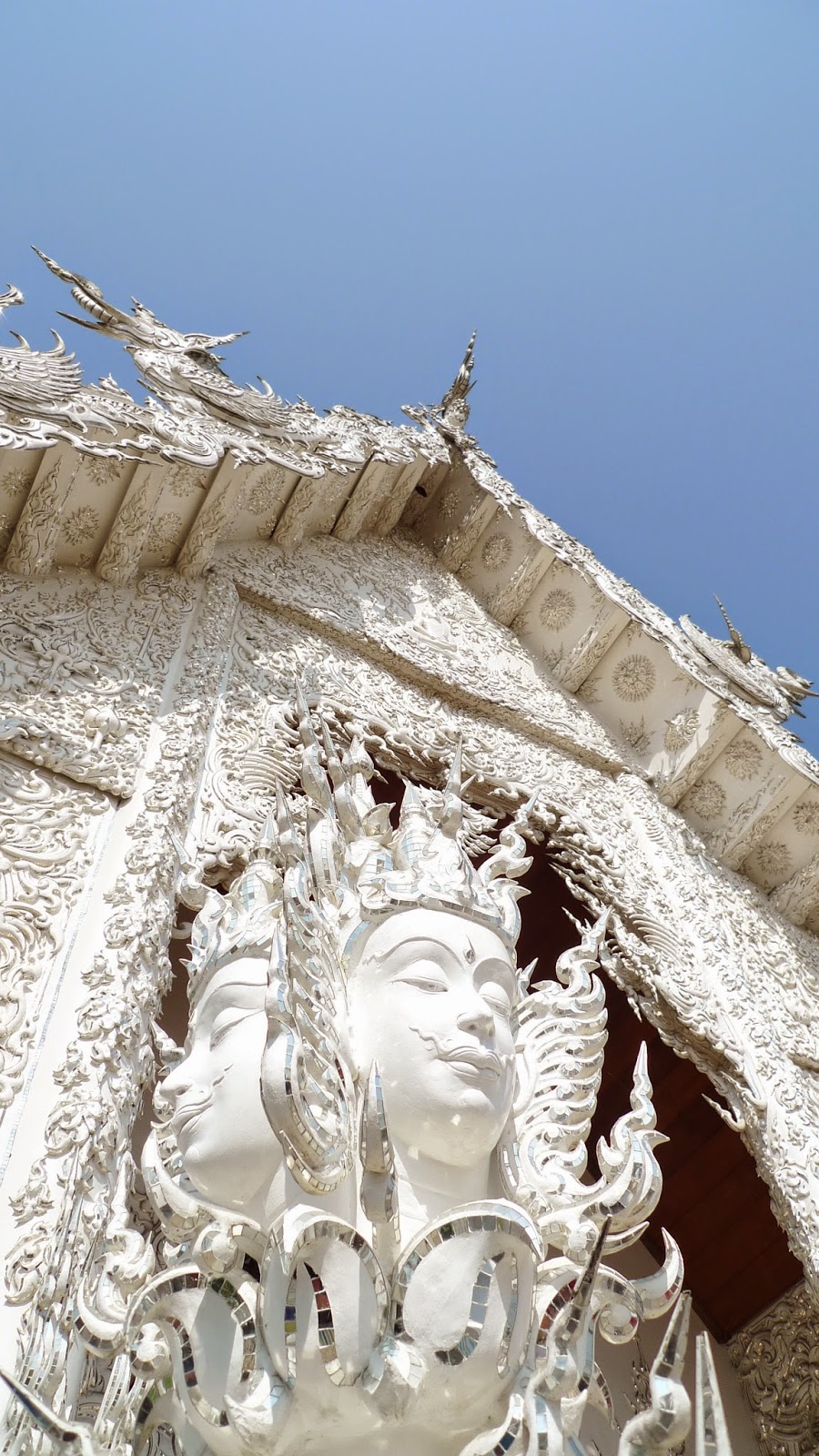 Meditative Buddha images in front of the ubosot 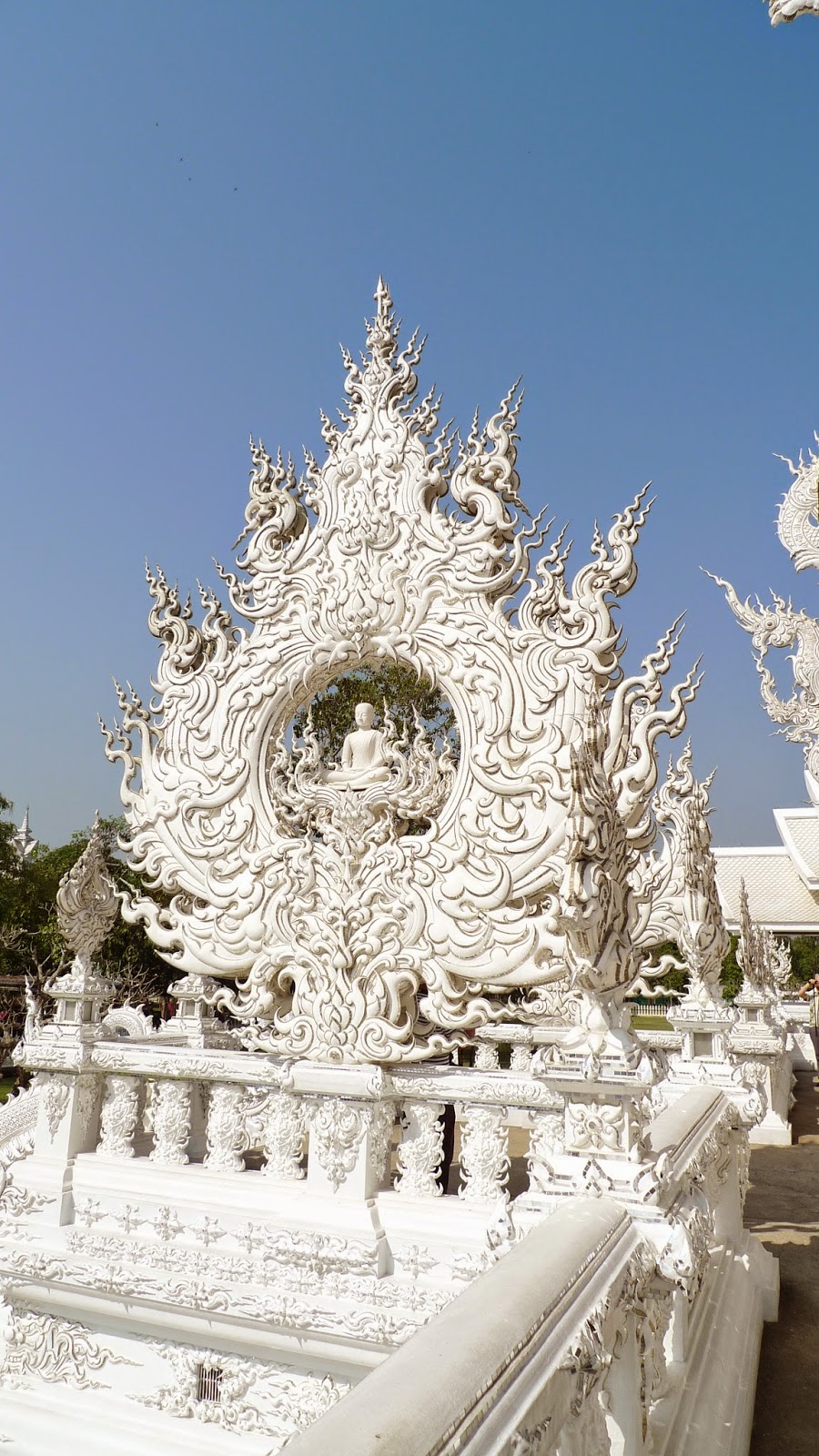 Sitting Buddha in medallion designs around the ubosot

Here are other photos in  Wat Rhong Kun. 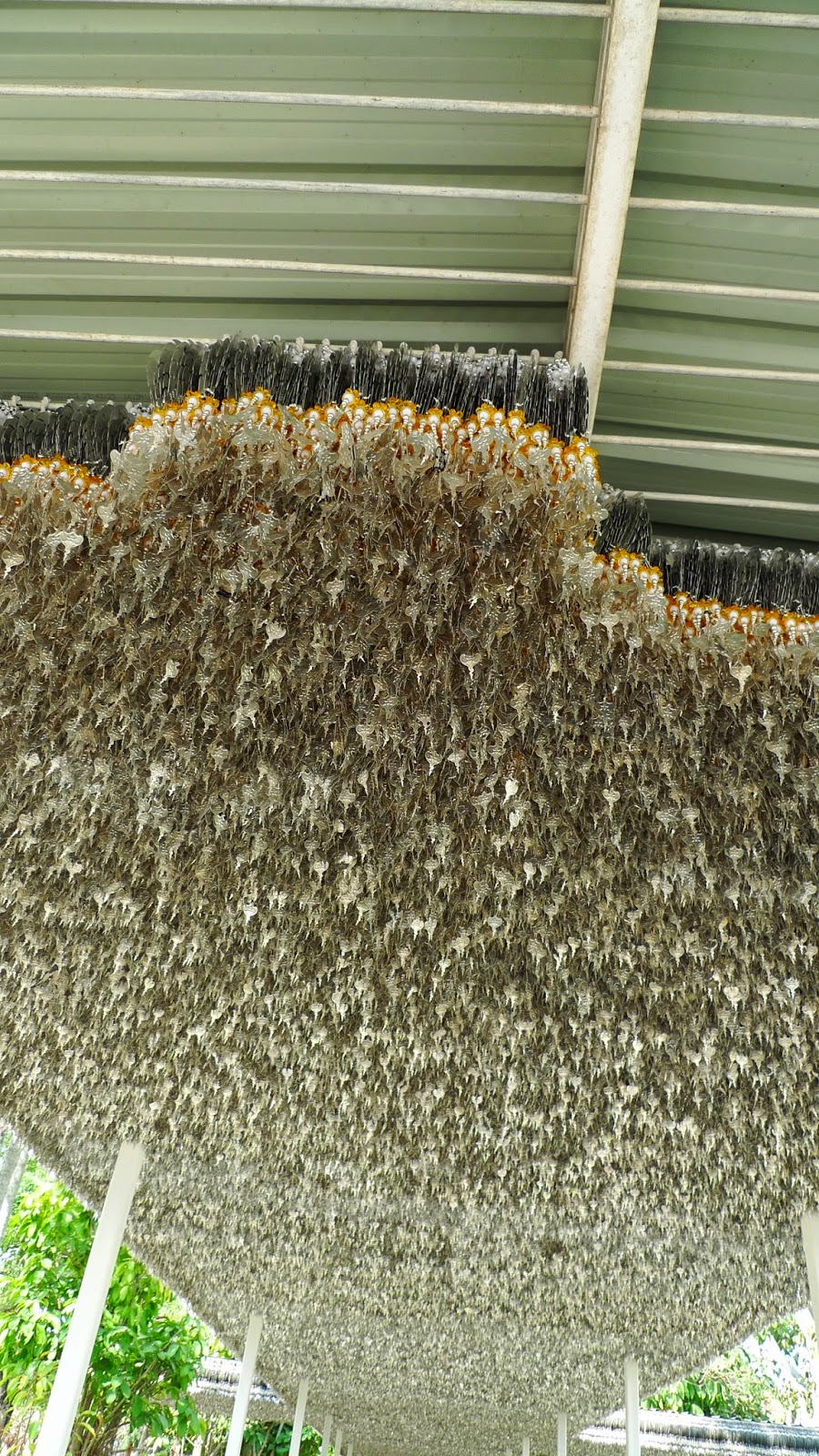 The ceiling of the covered walkways are used to hung the prayer requests from the people who come to visit. 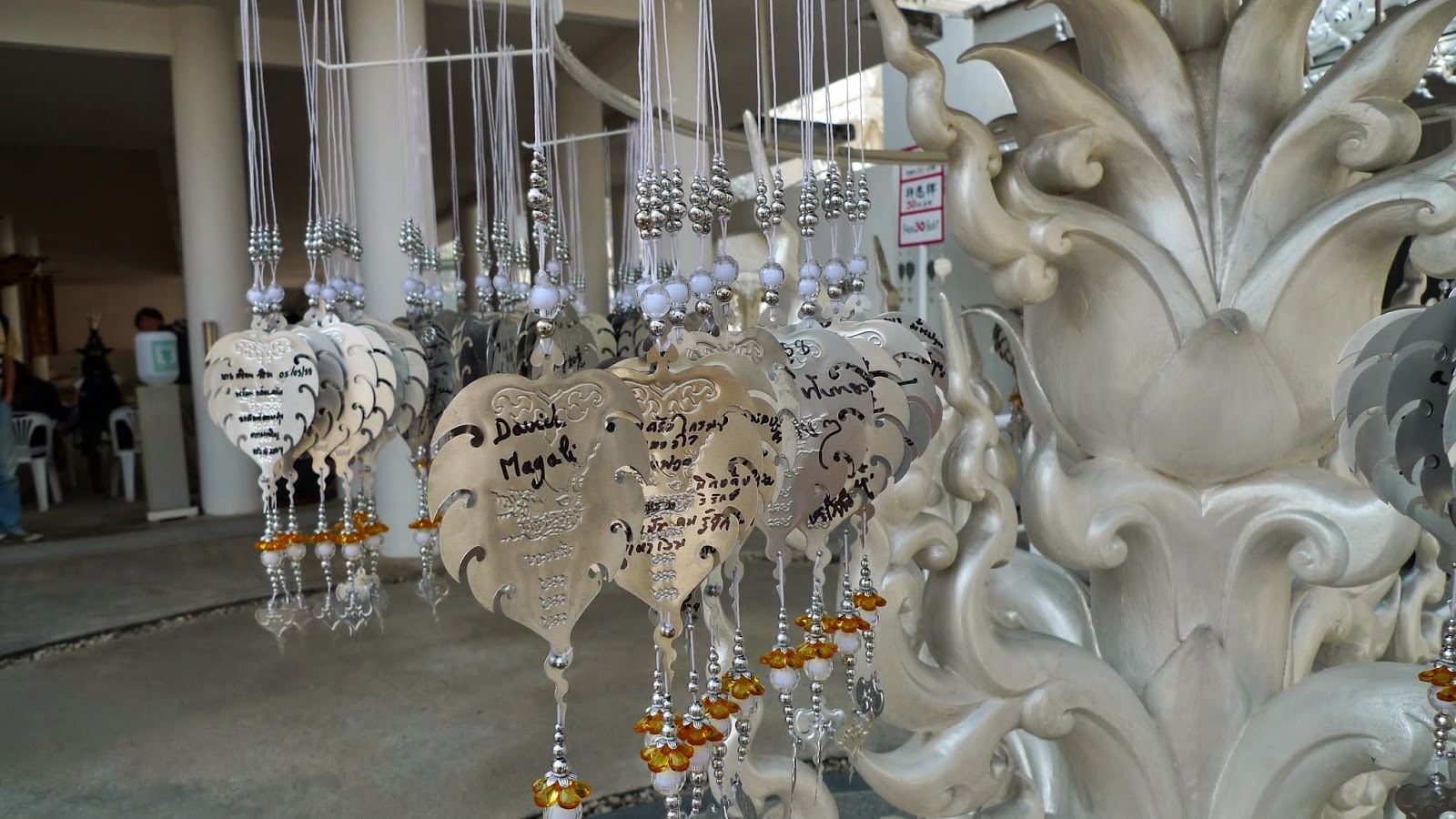 The requests are written with black marker pens on these decorative metal hangings which can be purchased for THB150, each. 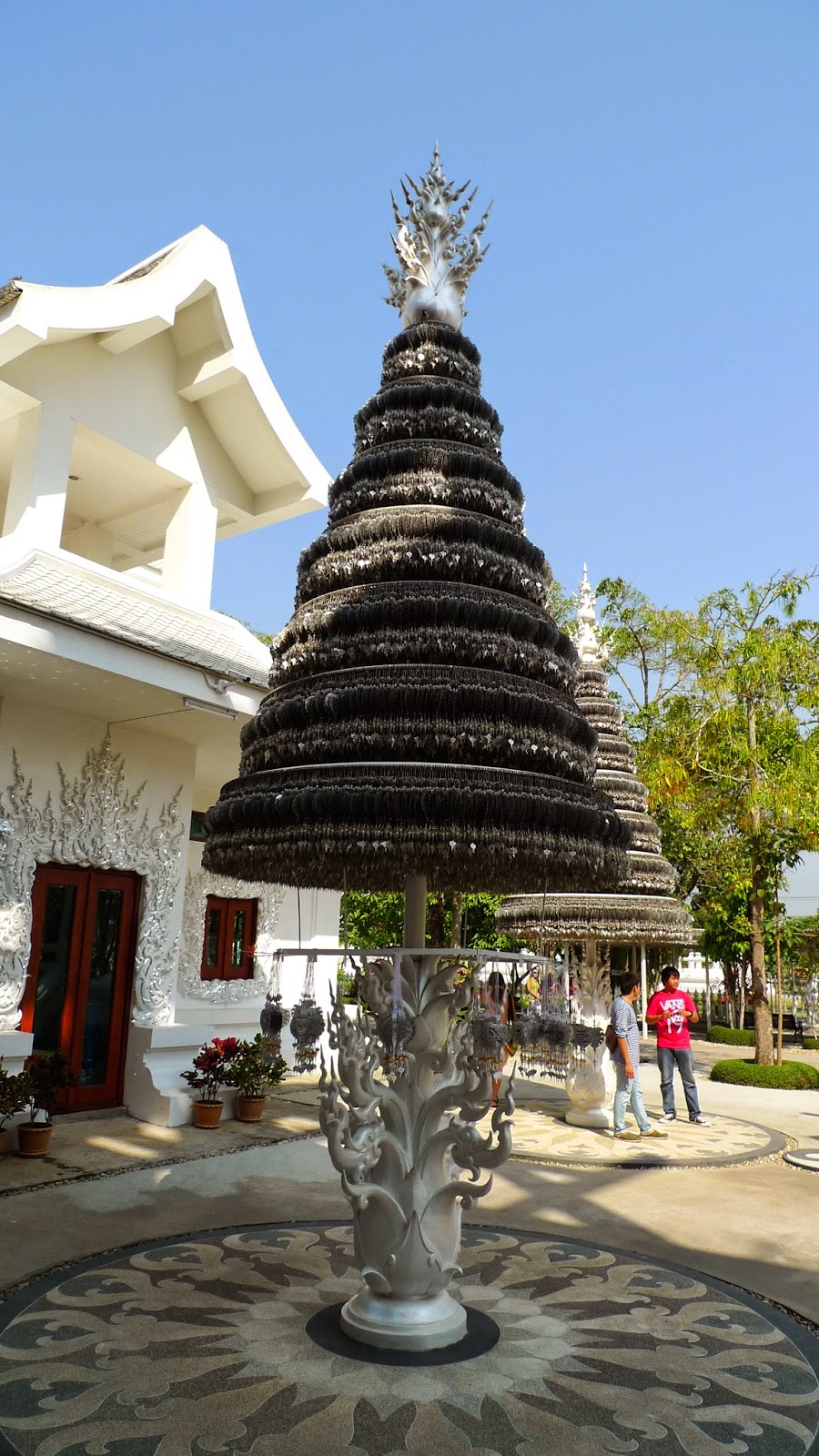 Several of these tree-like designs are also used to hung all the prayer requests by the Buddhist followers. 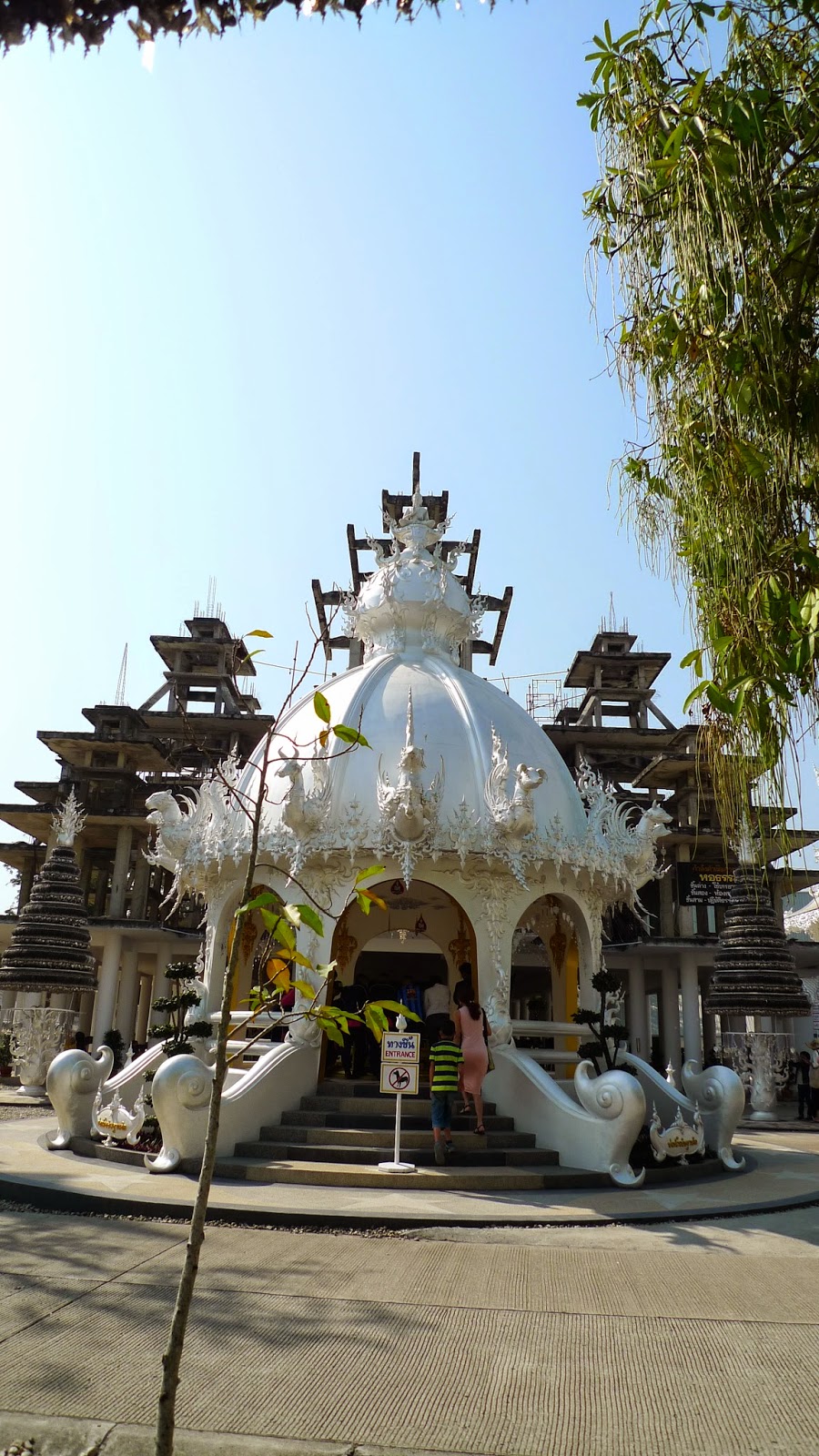 This structure houses a wishing well of sorts... 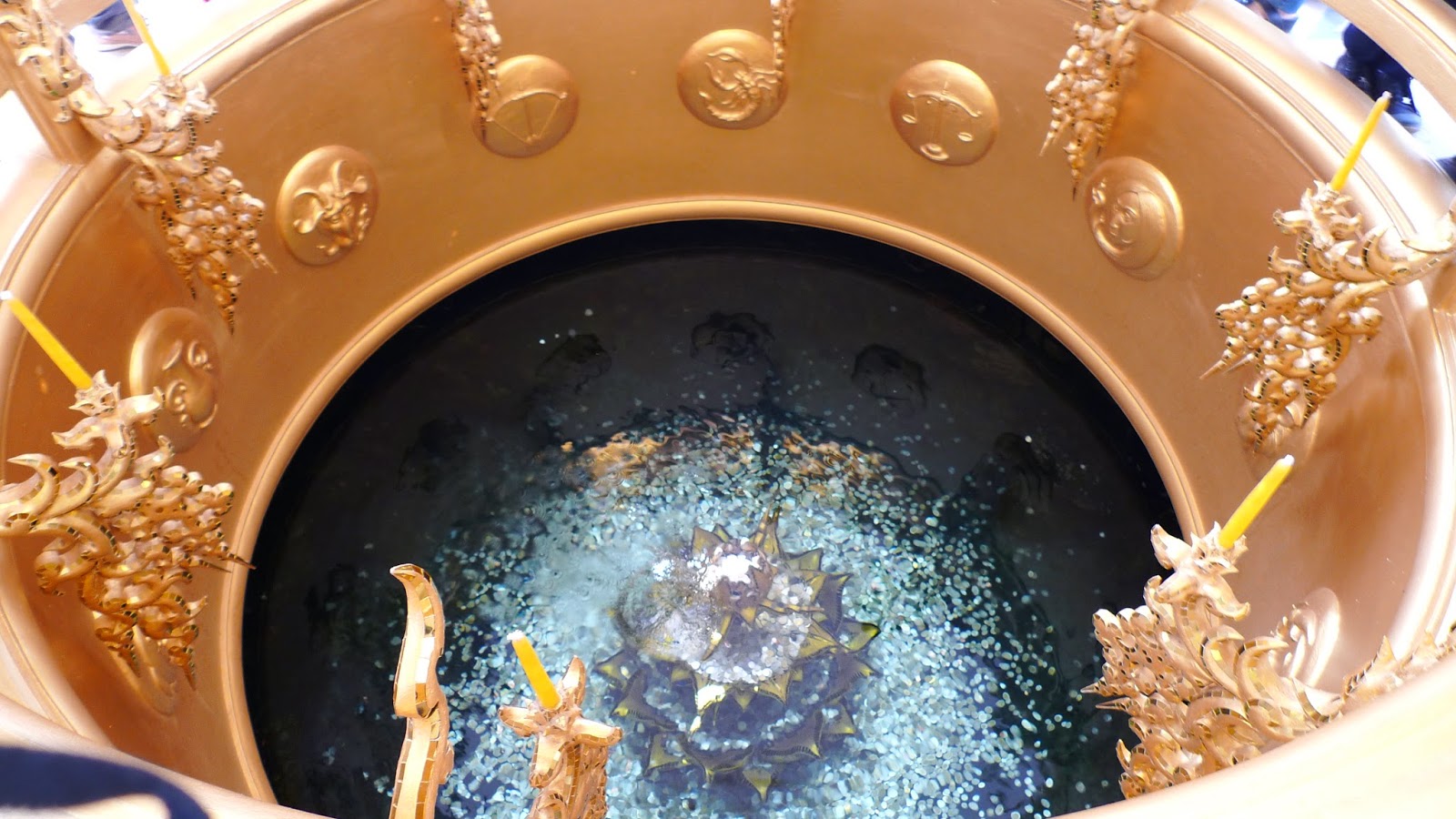 ...as people throw their coins into the water. 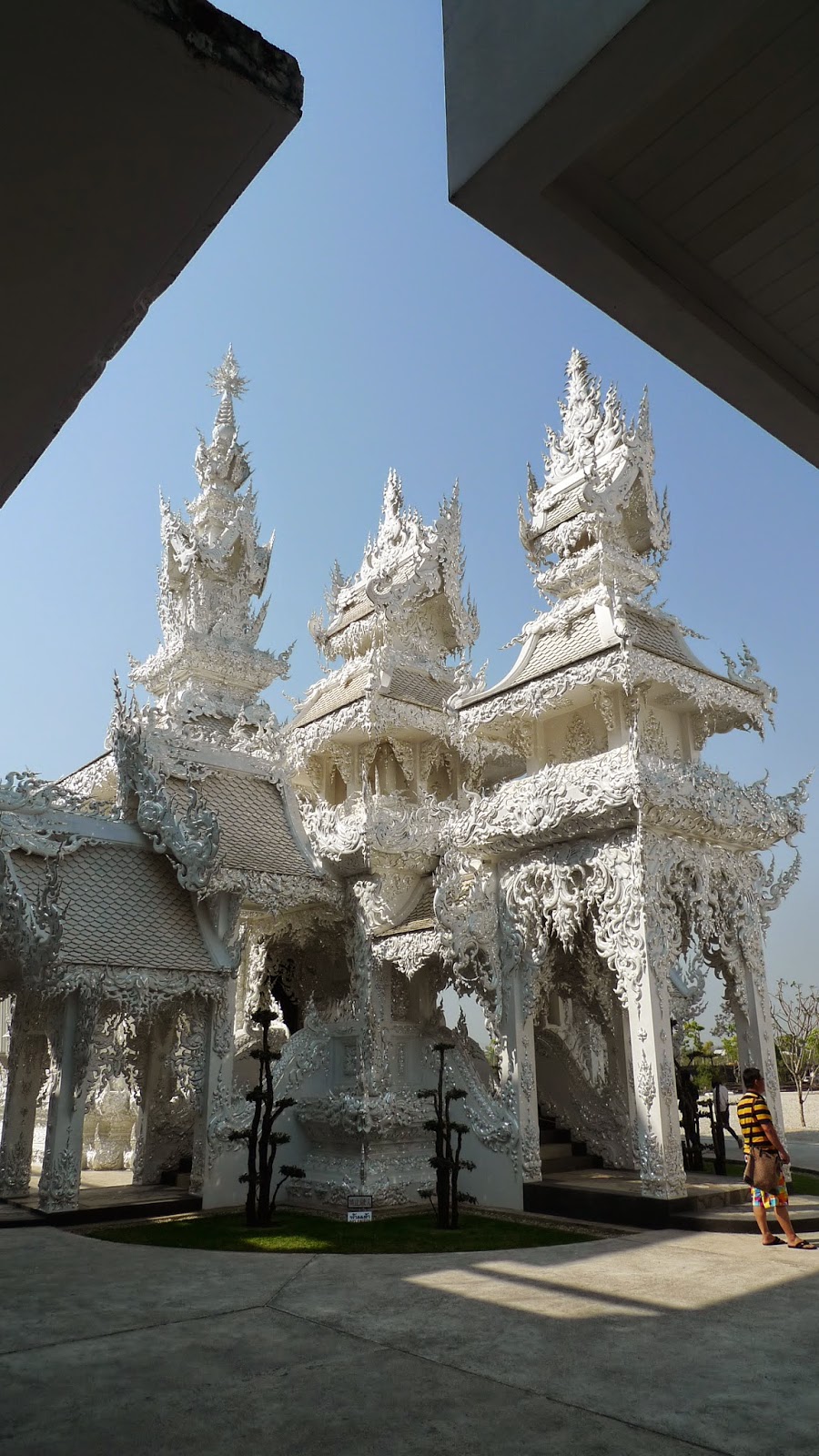 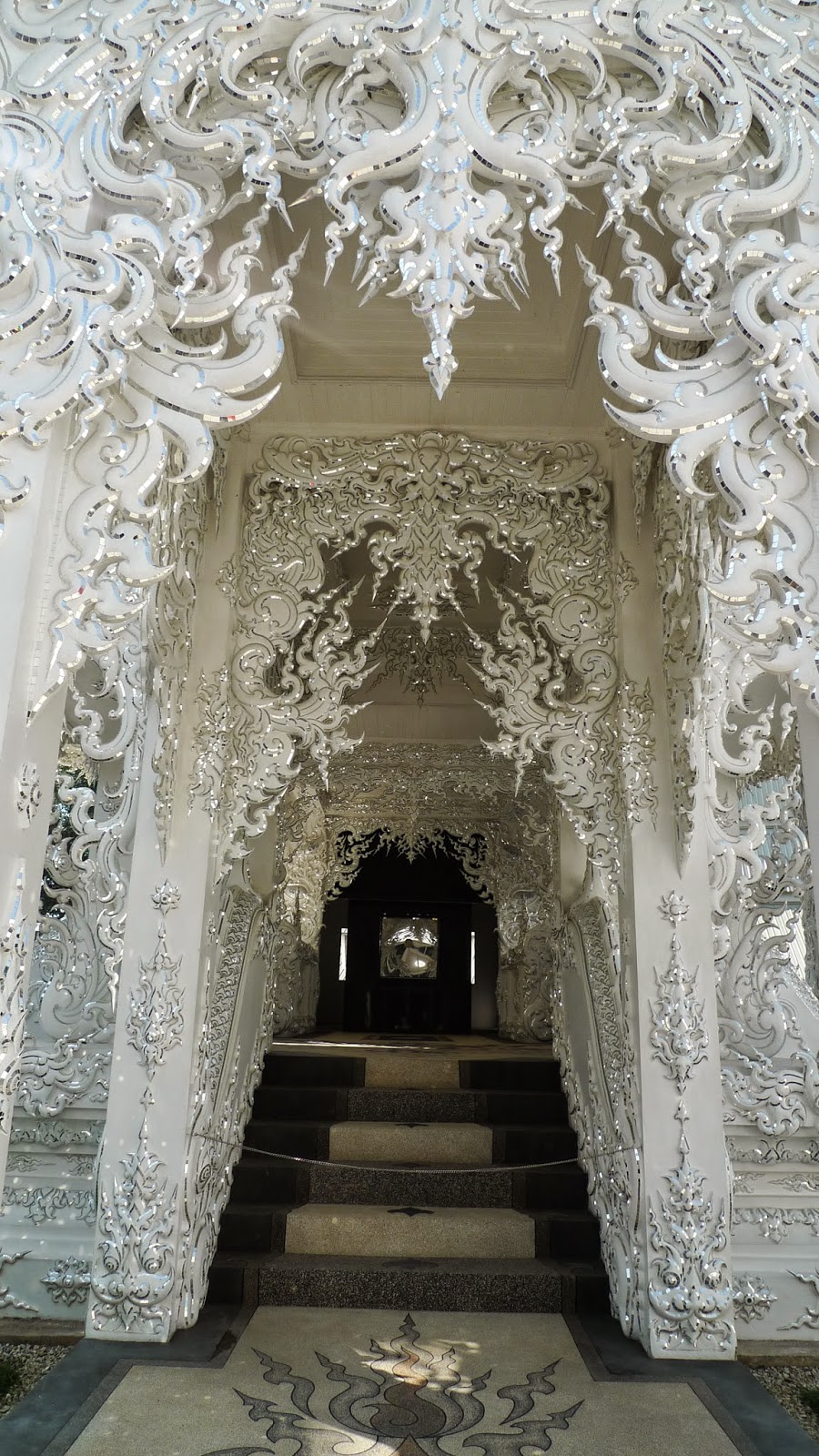 The bot or ubosot

This structure is off limits to the public. It is where new monks take their vows. Inside is an altar with several images of Buddha. 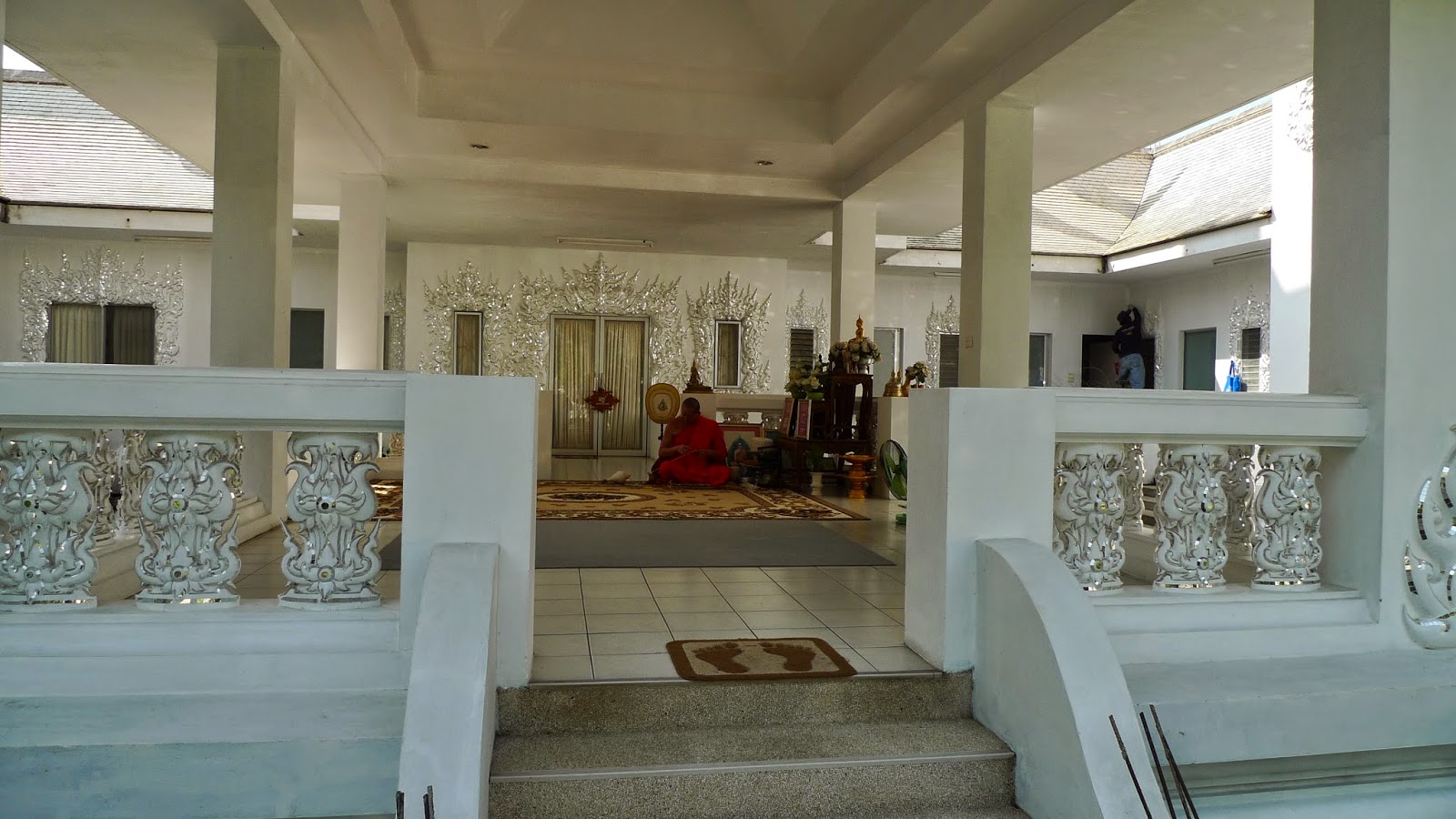 A monk in meditation in the sala - an open-sided pavilion 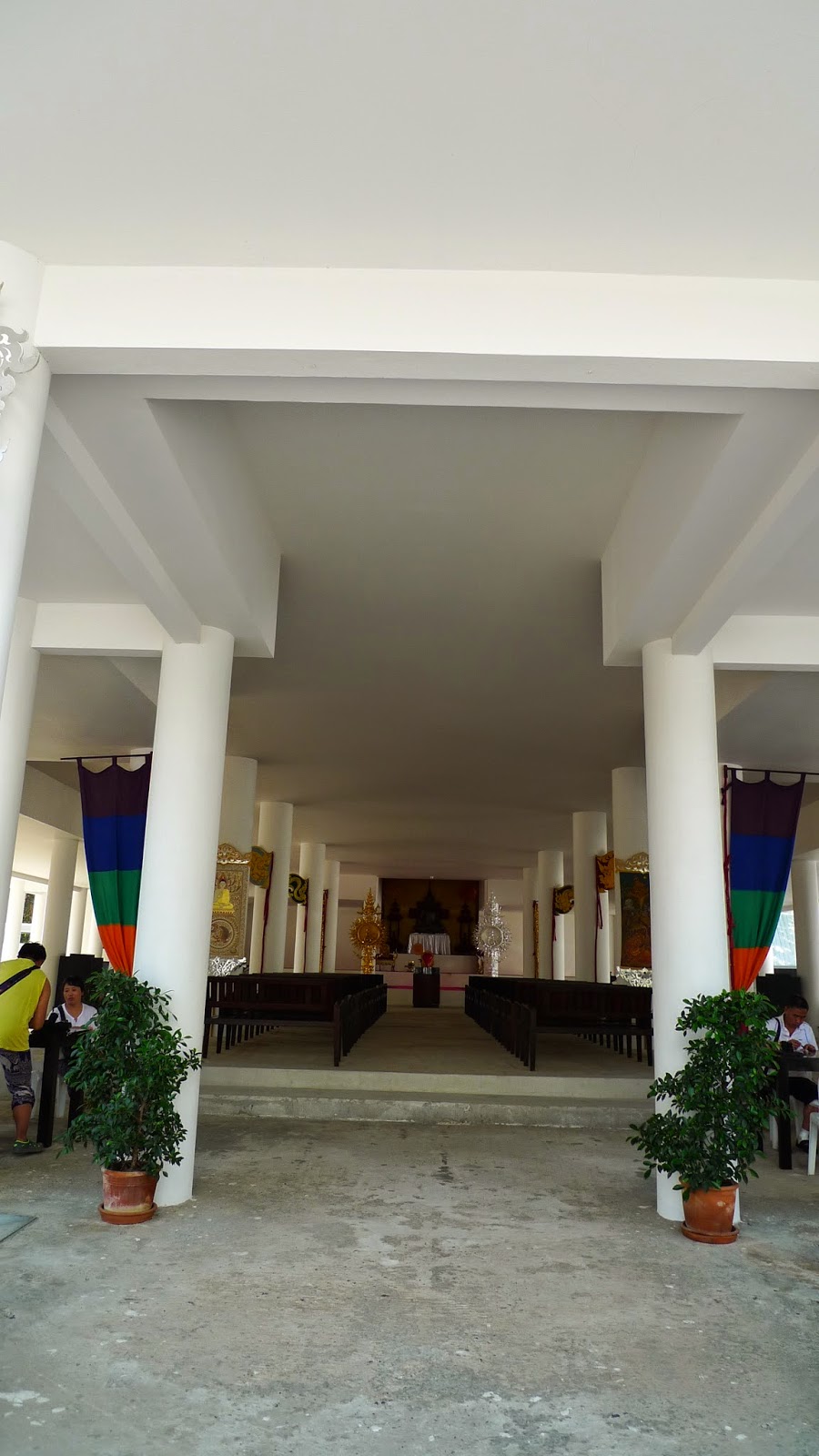 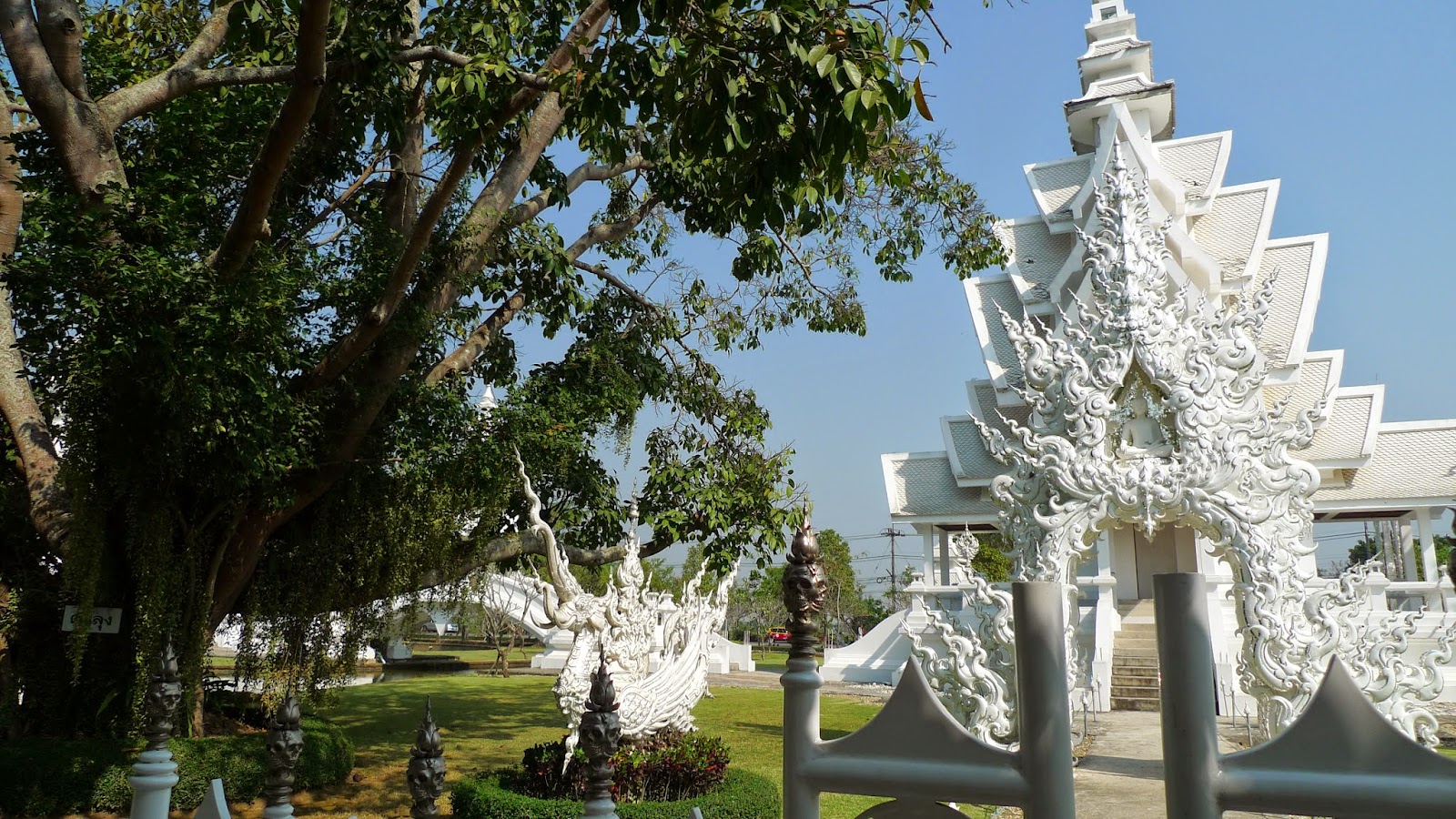 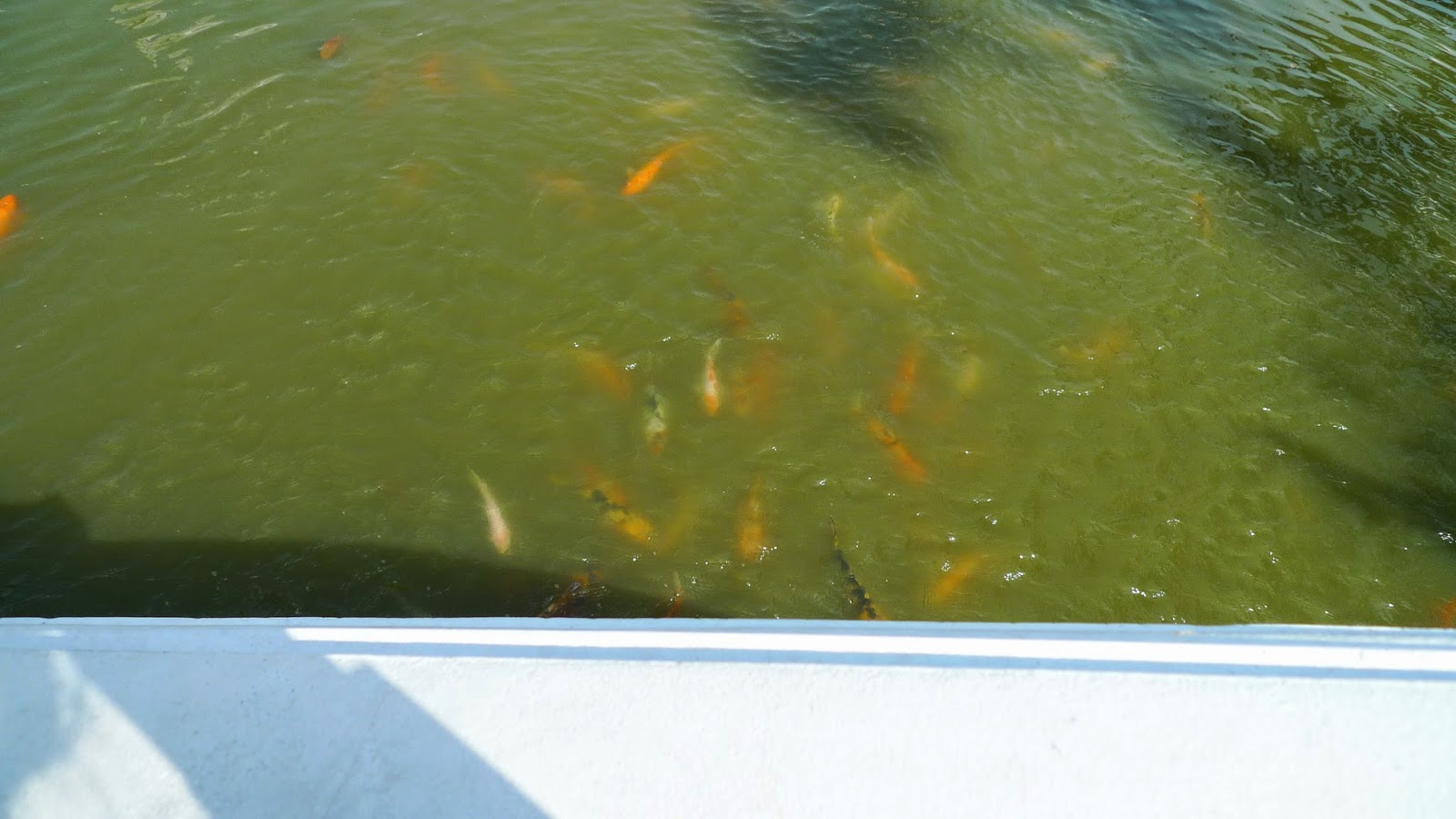 Koi fish in the lake 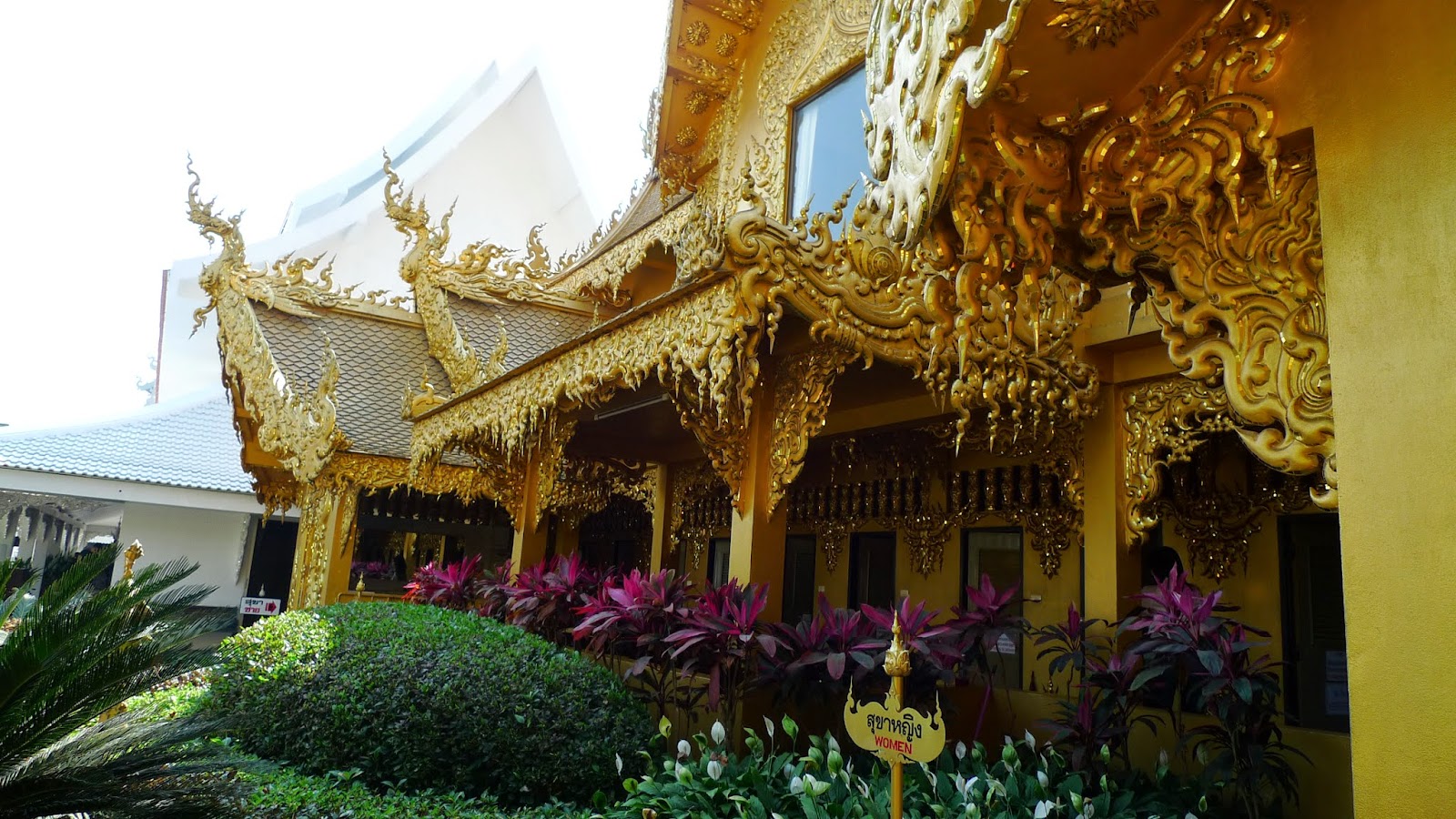 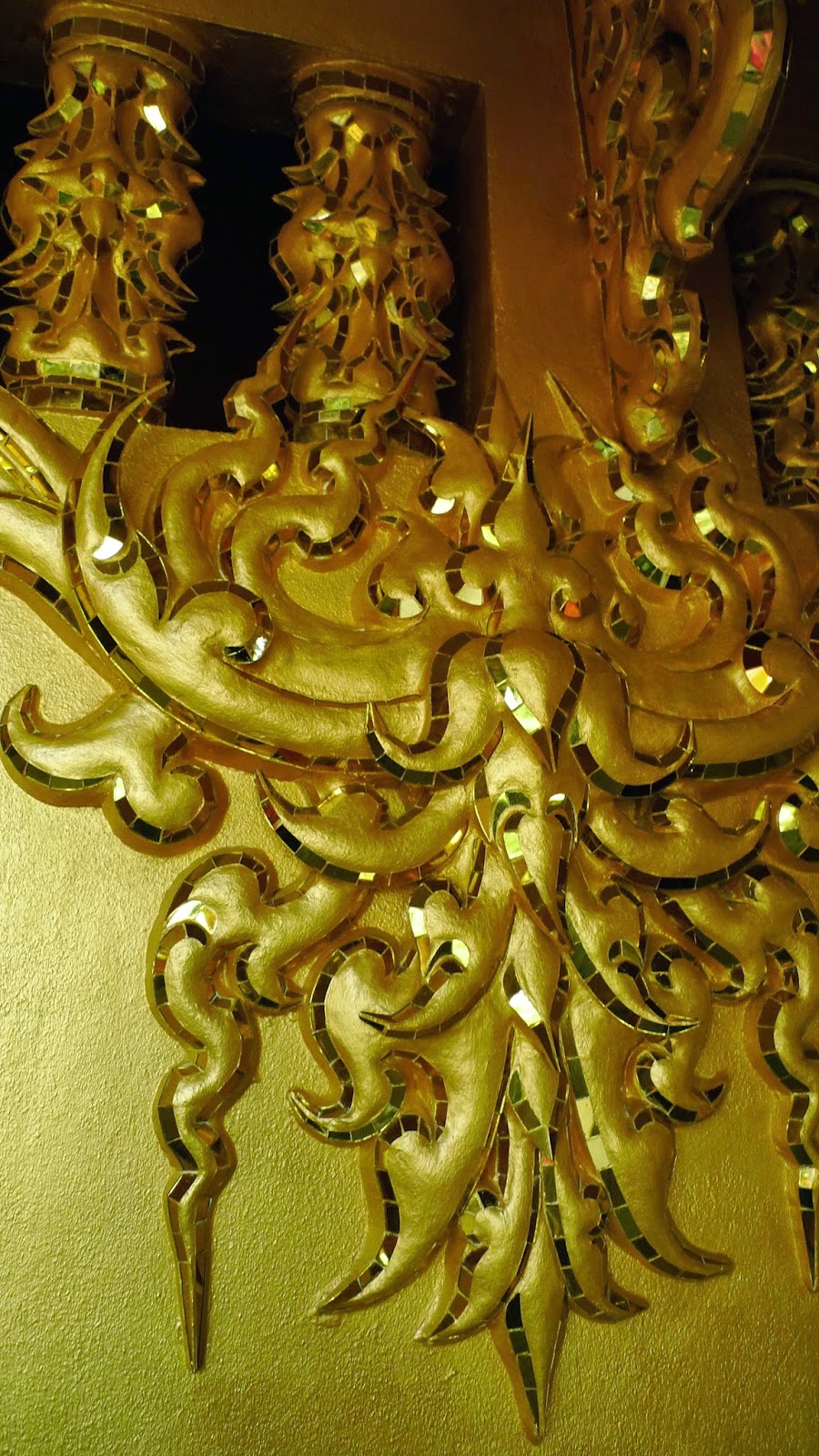 This very ornate, gold structure represents the body. The gold is symbolic of peoples' wordly desires for material possessions. The golden building invites man to be meritorious, and to focus on the mind instead of the wordily desire. 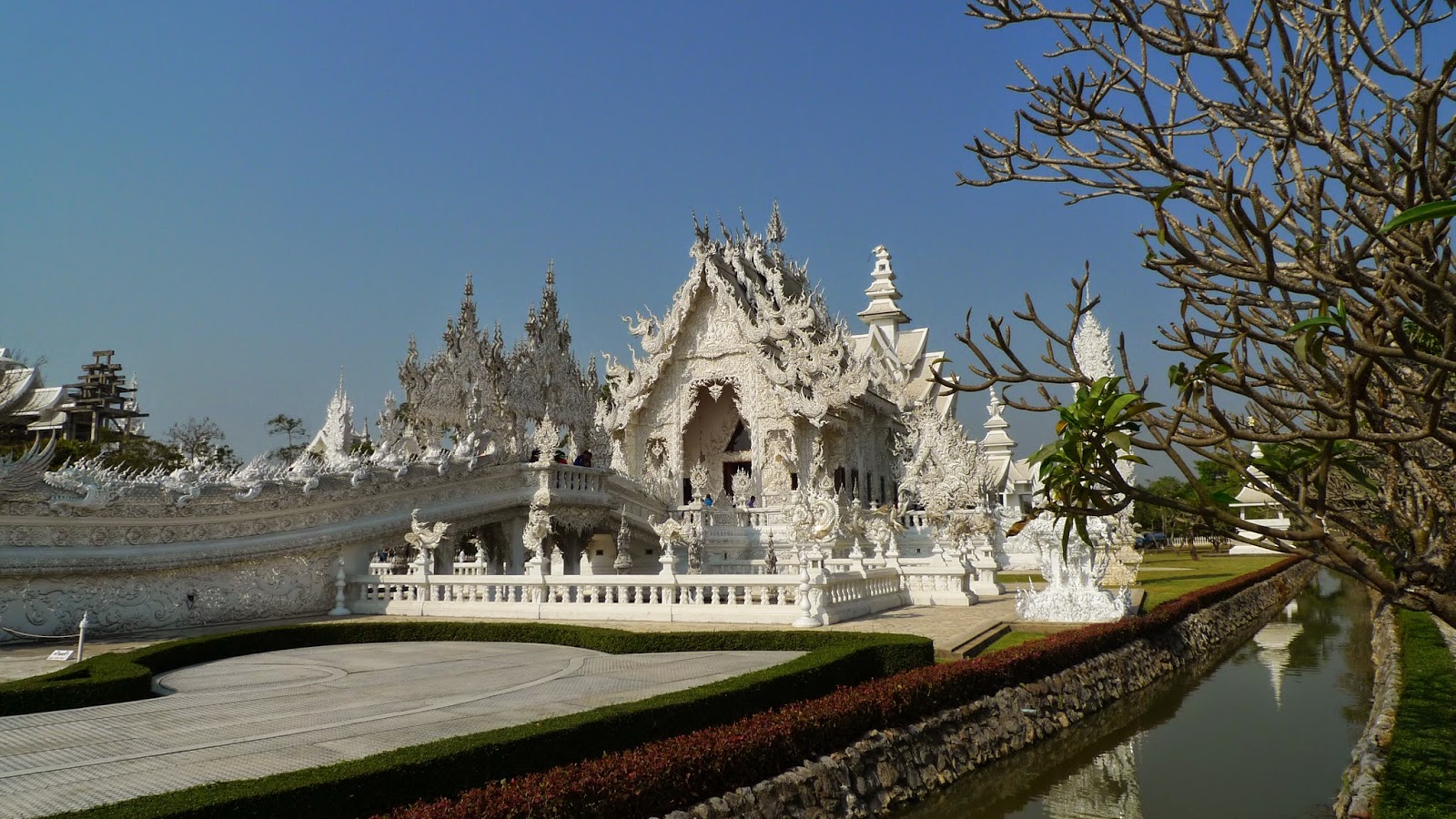 Even as the work continues, visitors are welcome to this beautiful temple compound.