There is more to know about Milan, more than it being the fashion capital of Italy. In this city is found one of the most famous paintings by Leonardo da Vinci - Il Cenacolo - the The Last Supper. It is located at the refectory of the convent at the Santa Maria dele Grazie (Church of the Holy Mary of Grace.)

Along with a couple of friends, we went to Milan to explore. 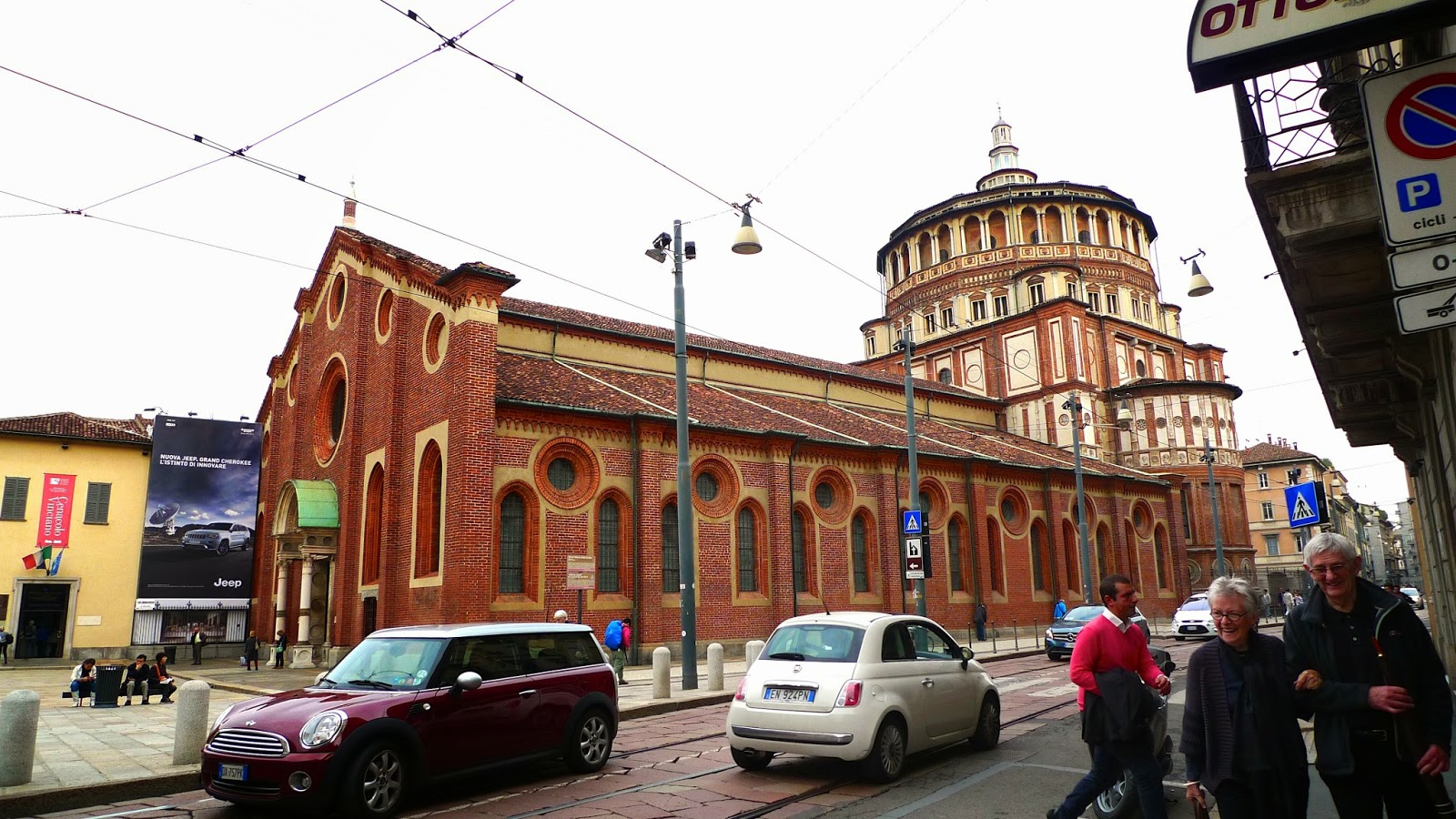 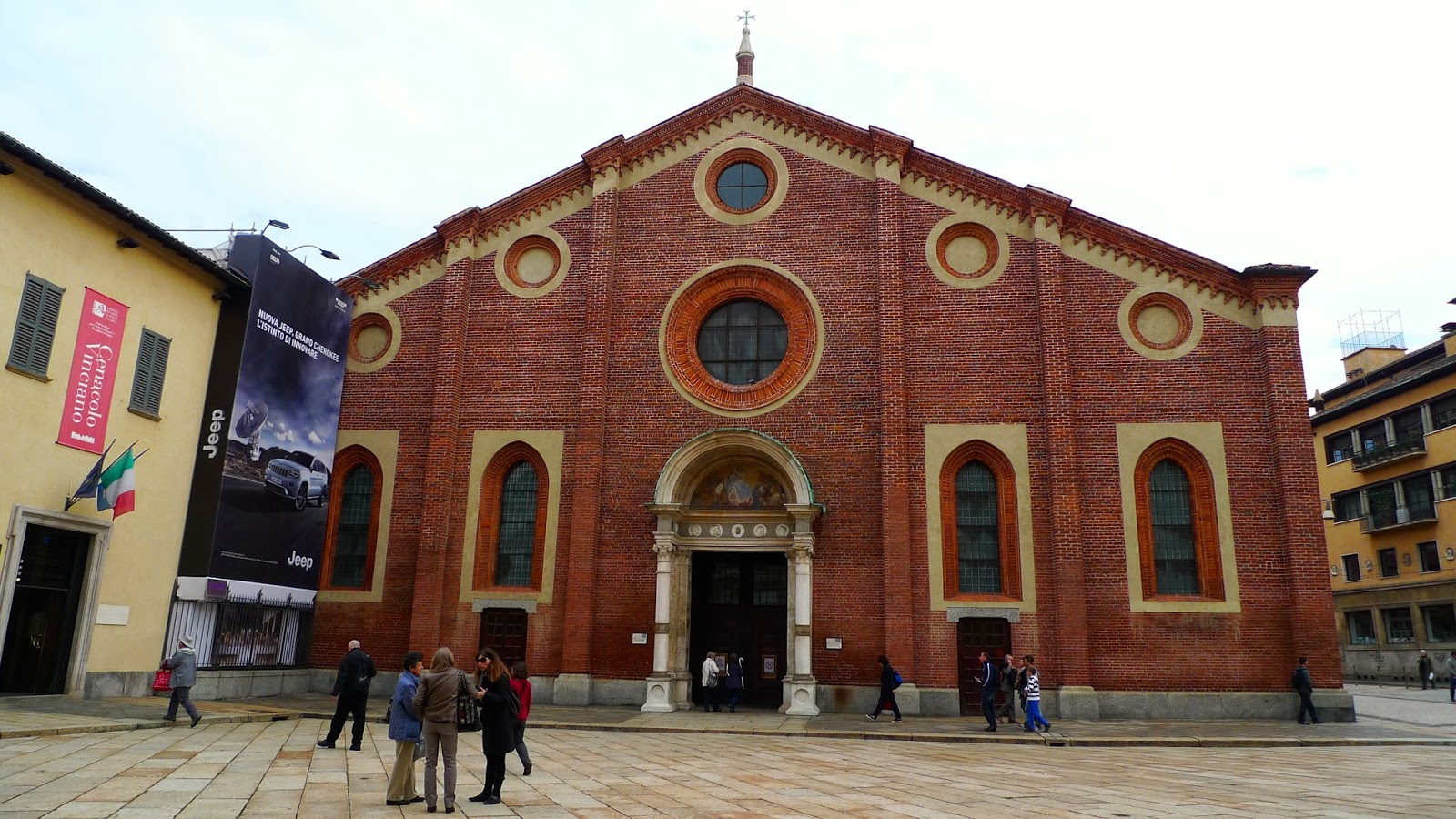 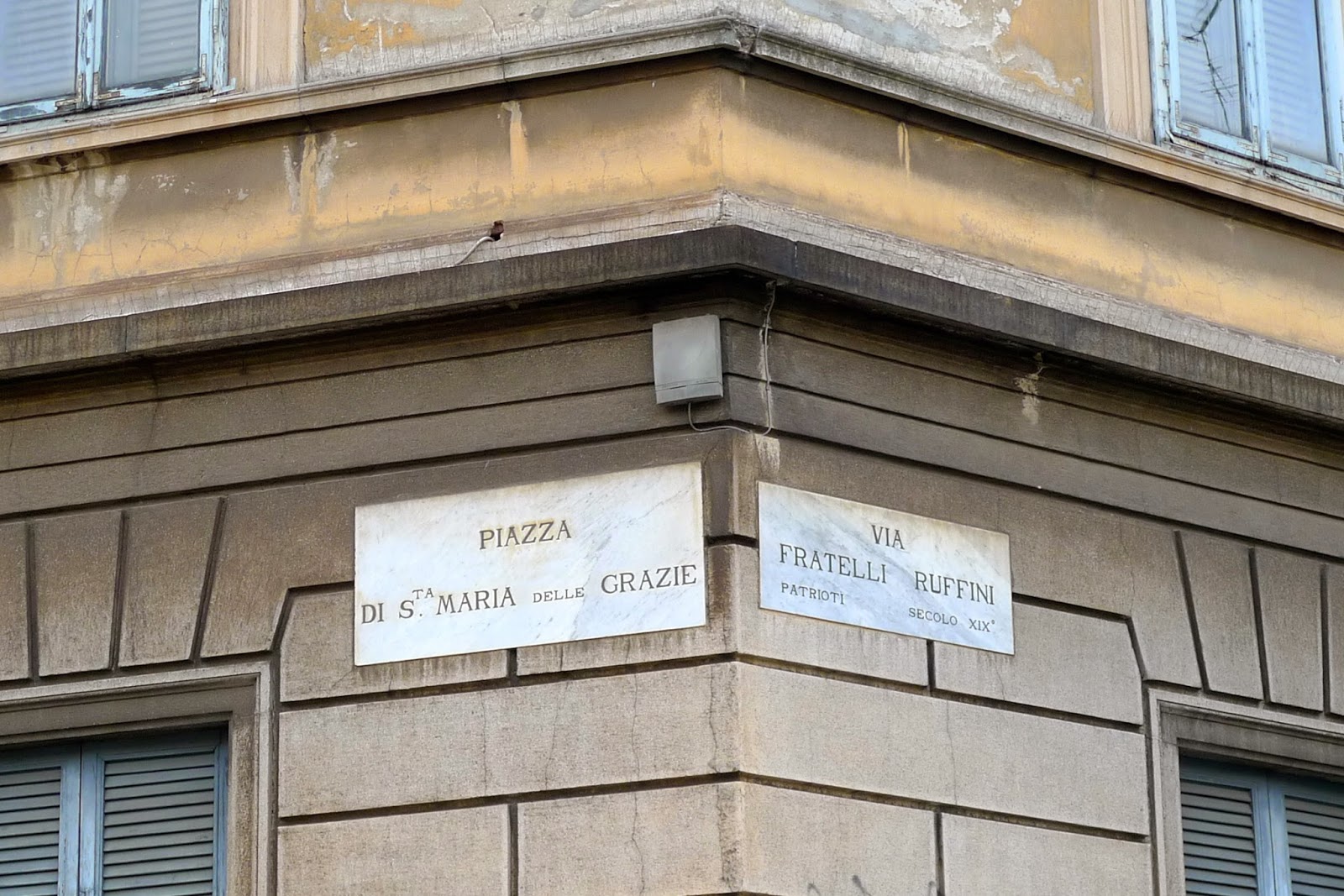 Santa Maria delle Grazie is a church with a most-visited Dominican convent. Upon the auspices of the Sforza family, headed by Francesco,  a church and a convent were built on the site where a chapel dedicated to St. Mary of Grace once stood. The commissioned architect for this project was Guiniforte Solari. He first started work on the convent and saw its completion in 1469. The church was simultaneously being built, however, it took longer to finish.

When the second son of Francesco rose to power and became Duke of Milan from 1452 to 1508 - Ludovico Maria Sforza (aka Ludovico il Moro), a patron of several artists, including Leonardo da Vinci  - the course of the history of the church changed. He was most active during the most productive stage of the Milanese Renaissance. It was then that he decided to turn the church into the family mausoleum by rebuilding the apse (a design attributed to Donato Bramante) and the cloister, which was completed in 1490. As the family mausoleum, Beatric Sforza - Ludovico's wife, was the first to be buried there in 1497.

It was he who commissioned Leonardo da Vinci to paint the  Il Cenacolo. Before seeing this, we had a brief tour of the church. 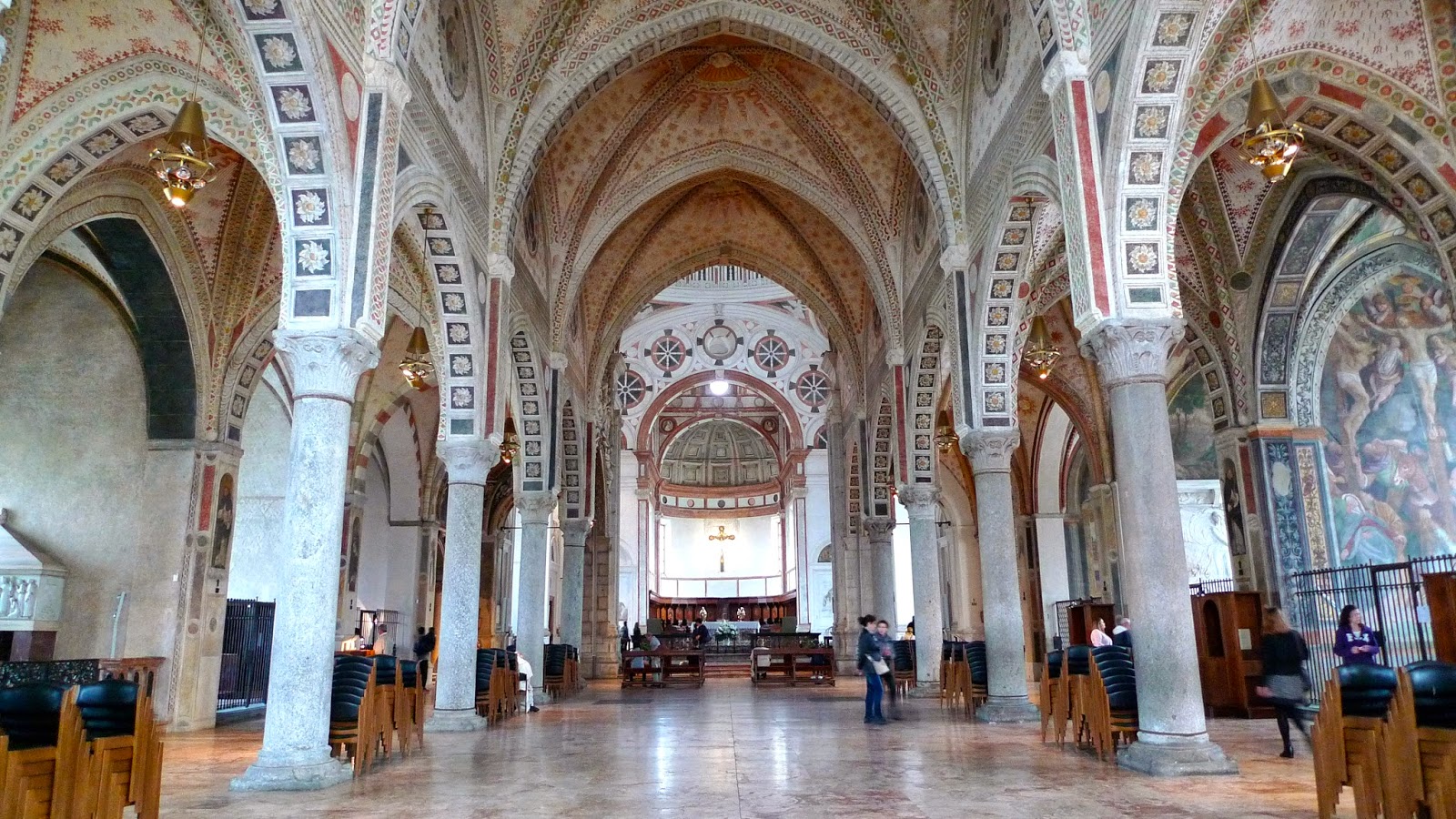 The church - a Lombard Gothic in design by Solari, constructed in 1463 and completed in 1482, had three main aisles and seven spans, supported by granite columns and the surrounding walls of the chapel. The decorations by various masters from the Lombard school did the decorations and saintly figures on the aisles and the pillars - by Butinone, Zenale, Montorfano, and Bergognone. The church design was primarily gothic, but there was Romanesque influence that was introduced, as well. 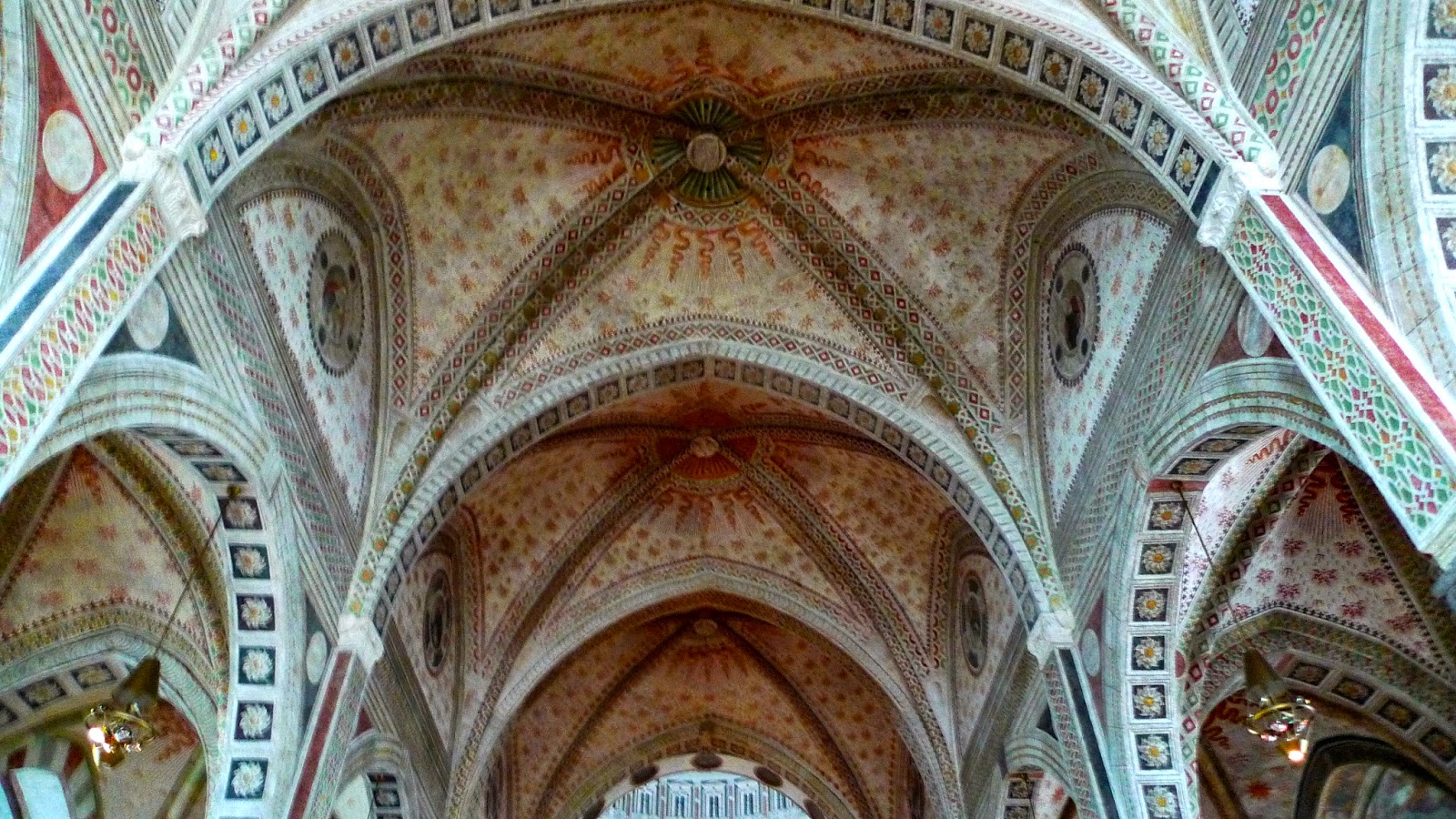 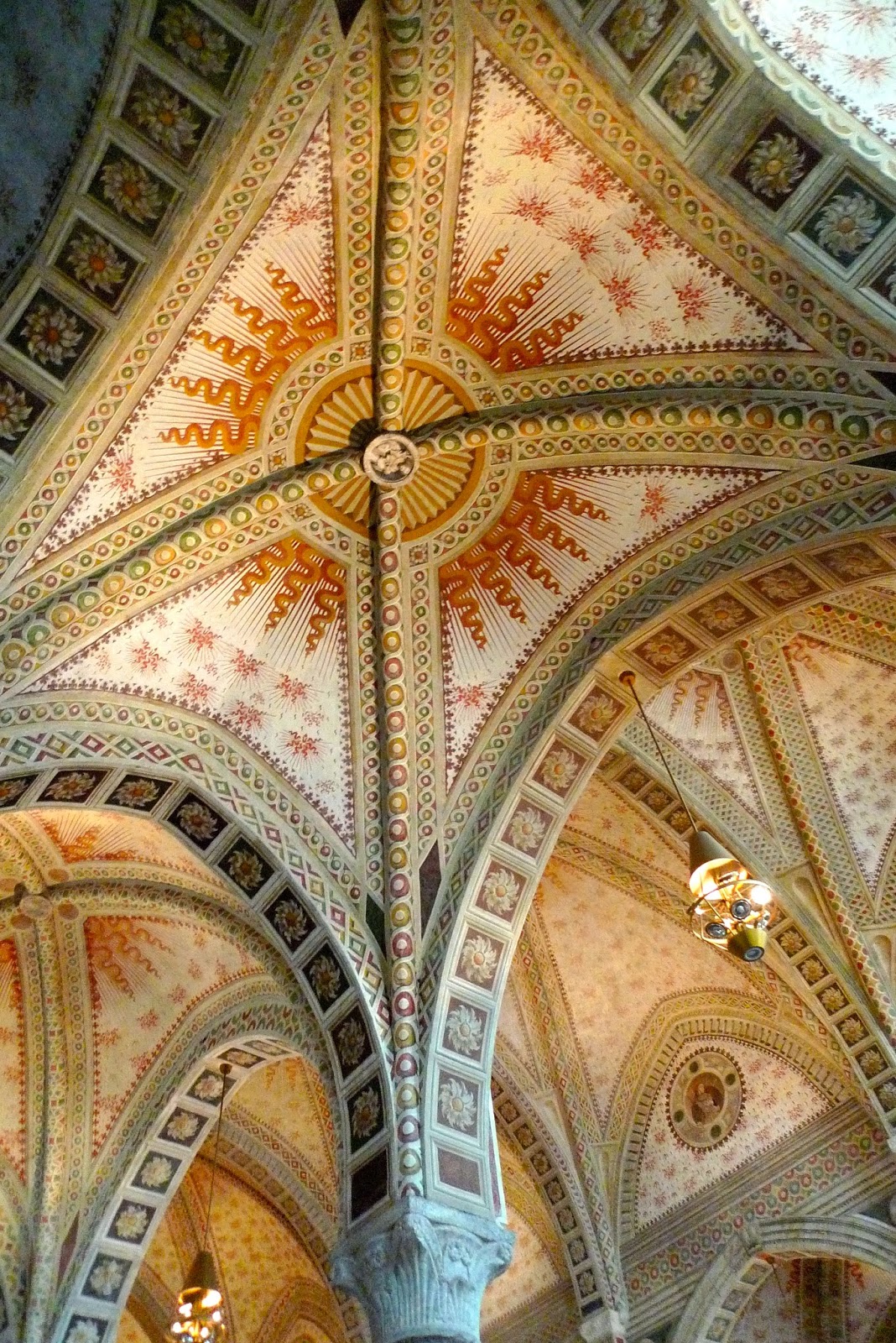 Close-up of the Gothic rib-vault 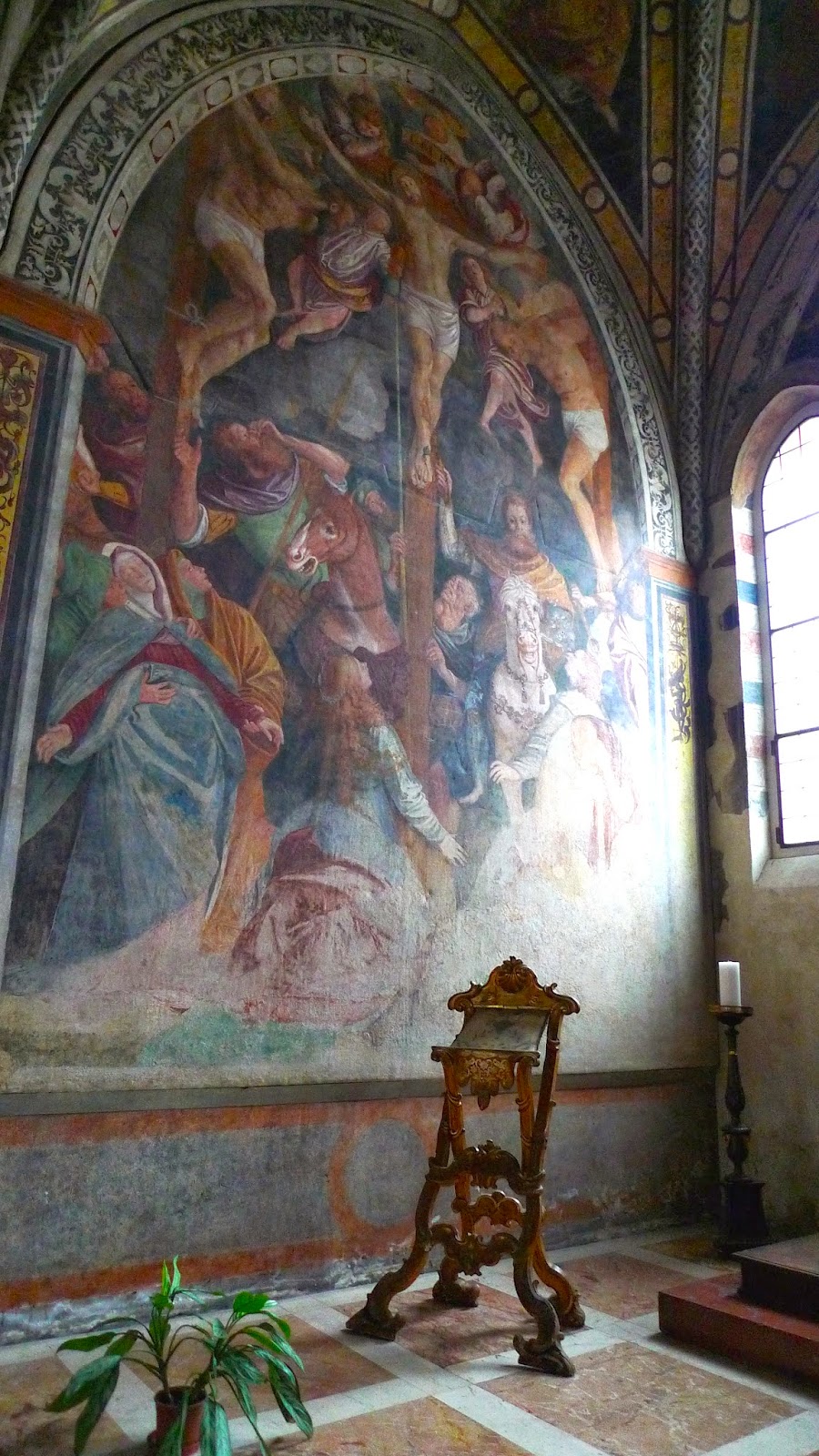 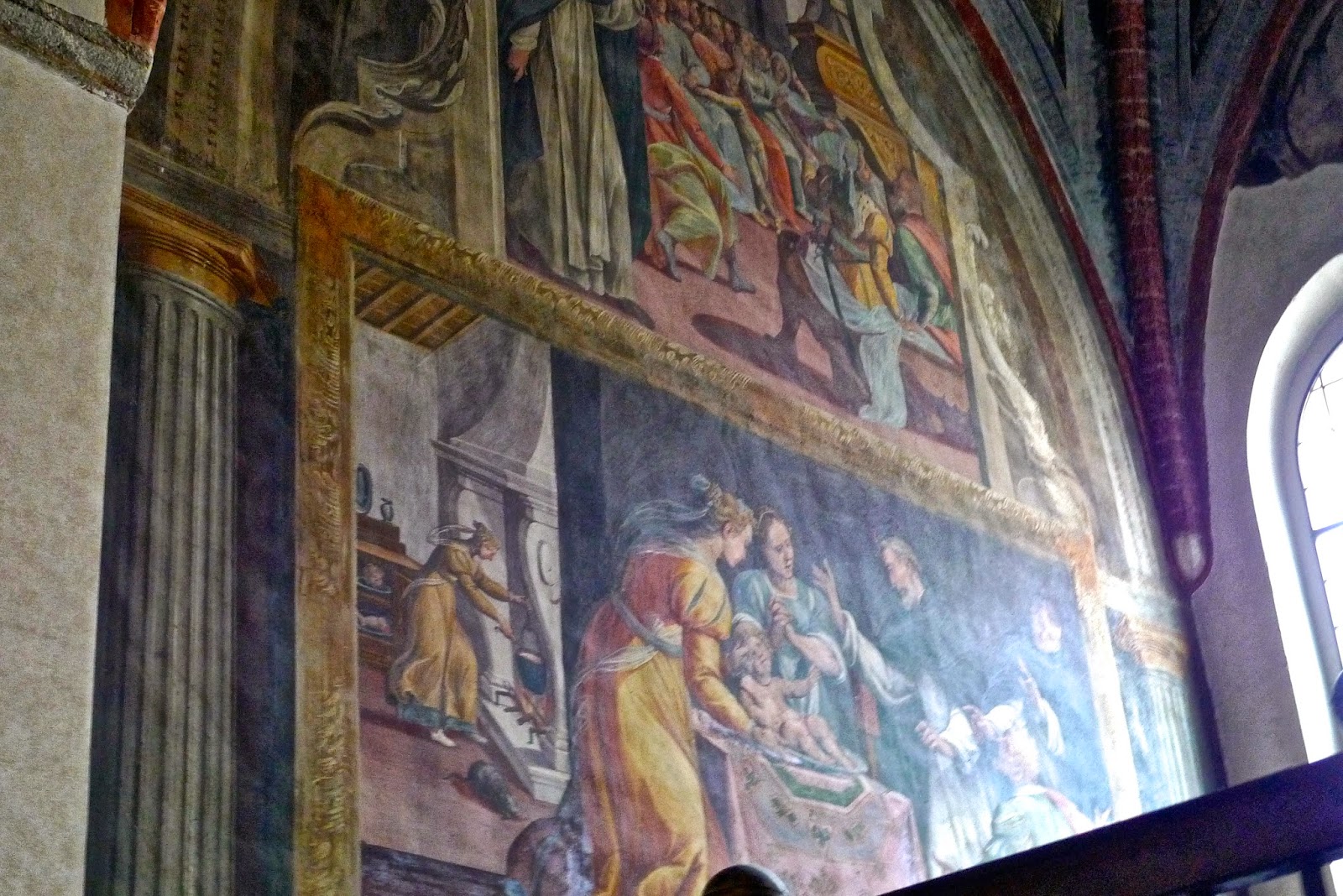 Some of the painted frescoes

The Holy Crown Chapel - on the right of the nave - was decorated with Frescoes. Originally, there was one by Titian - The Crown of Thorns - but this was stolen by the French troops in 1797 and has now found its way to the Louvre. The other artists who contributed their talents were Gaudencio Ferrari - The Stories of the Passion; a fresco by Bramantino in the adjacent cloister, and a depiction of the resurrection and passion by Bernardo Zenale in another part of the church.

This is the part we really came for - to see the painting of the Last Supper. Finally, it was time 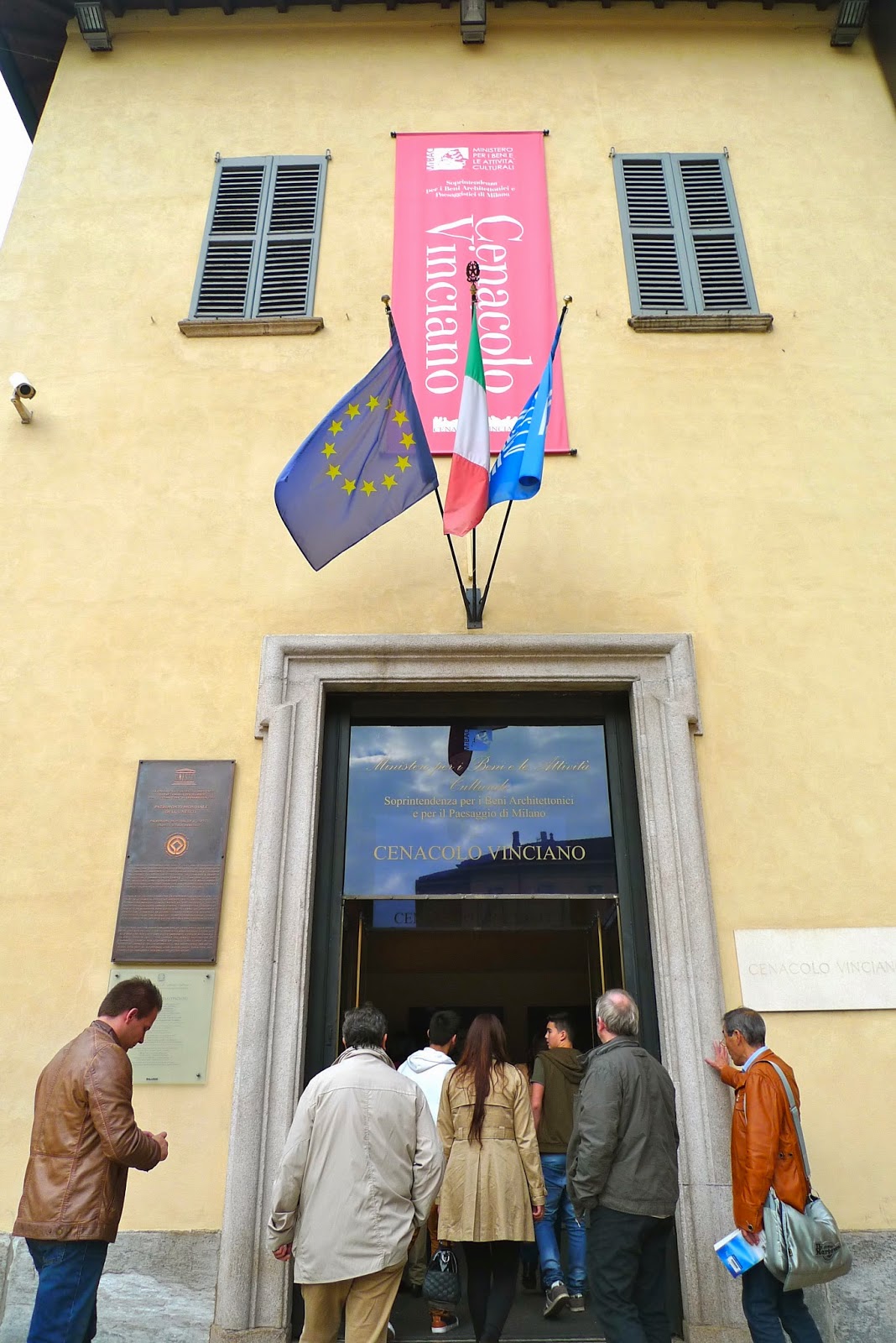 It takes some planning to see this. The number of limited visitors are admitted by appointment only, which means you have to buy your tickets beforehand, months ahead. The best way to do this is to buy them online.

About ten minutes before the appointed time, we went in to join the rest of the group reserved for the same time slot. Through a series of doors, we made our way in.


Inside the refectory of the convent (which was once used as a dining room by the monks), we had a chance to see remnants of what used to be a fresco of the Last Supper by Leonardo da Vinci. When this assignment was given to da Vinci by the Duke of Milan - Ludovico Sforza, it was in line with refurbishing the monastery and the church, and at the same time, to heighten the city's prestige by having fine art and architecture of that period. But he had an ulterior motive, for after all, he was preparing it for his own burial place.

He developed his own technic. Leonardo went about this commission by painting on a dry wall, instead of wet plaster, thus, it is not considered as a true fresco. In a true fresco painting,  no changes can be made to modify, as the artist paints. What he did was to seal the stone with double layers of dried plaster, and then he added an undercoat of white lead to achieve brightness from the oil and tempera painted over it. The application of the white lead was something he borrowed from panel painting. These technics he employed allowed him to take his time to develop his orchiaroscuro (shading - the use of light and dark contrasts), which was, typically, his style. The finished painting measured 181 inches by 346 inches.

In this completed sacred art, Leonardo da Vinci used a perspective point - giving his characters and setting a two-dimensional surface "as seen by the eye." This gave the illusion that the wall of the refectory had been extended or opened up to another room.

What da Vinci depicted was the reaction of the apostles - that of consternation, anger, or shock, upon hearing that one of them would betray the Lord. These questions must have been running in the minds of the apostles: Who was going to do this heinous crime of betraying their master? And how could someone plan to do such a thing?

Unfortunately, not much of the original work remains today, despite numerous attempts to restore it, with the last one done in 1999. With what little that is left, we were not allowed to photograph to have a keepsake, but instead, we had a wide-angle photograph  of the painting outside the convent to view. Here are the segments I took of the picture. I have intensified the colors to better define the characters.

In a discovery made in the 19th century, it was noted that  the apostles were identified in a study sketch in The Notebook of Leonardo da Vinci p.232. 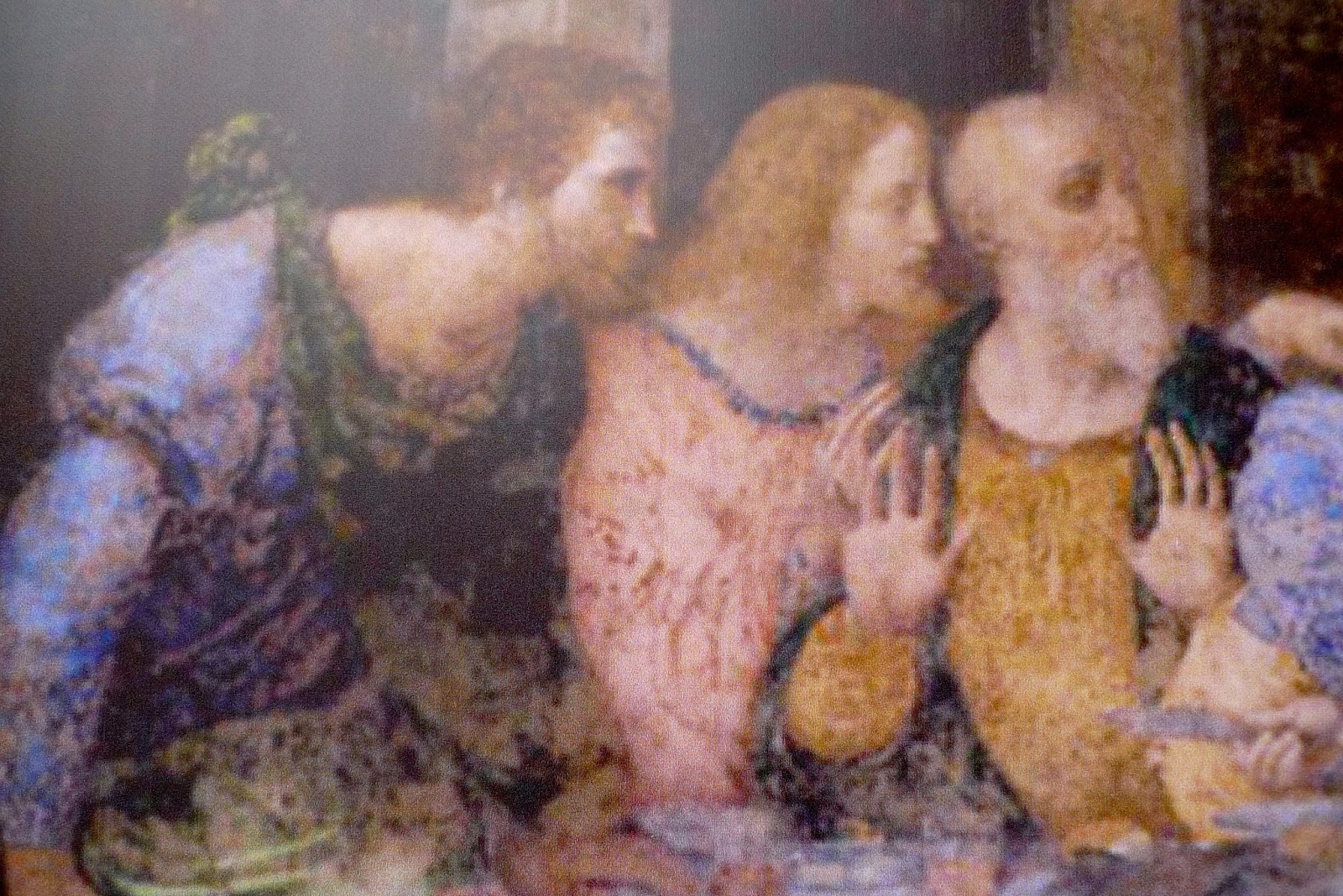 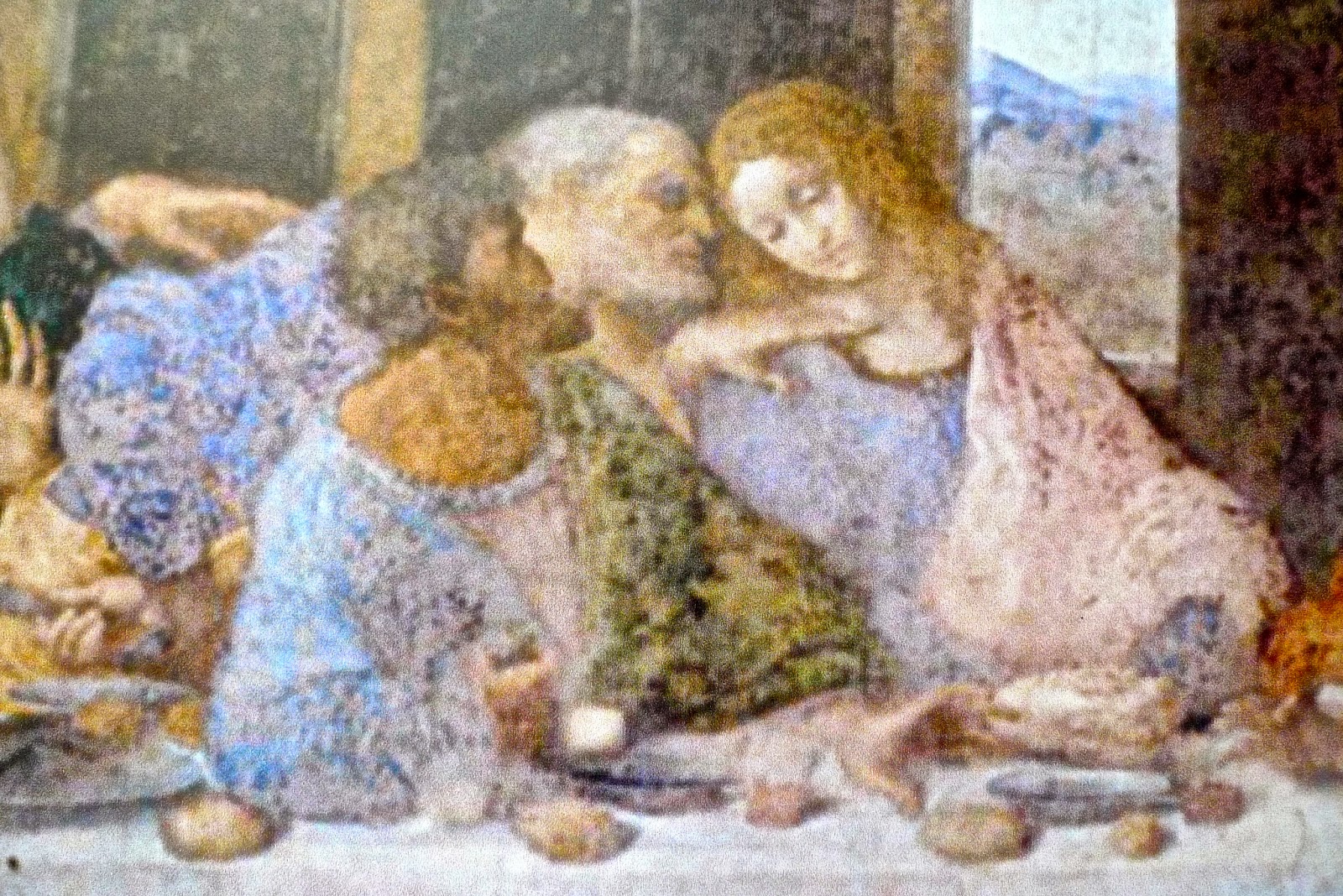 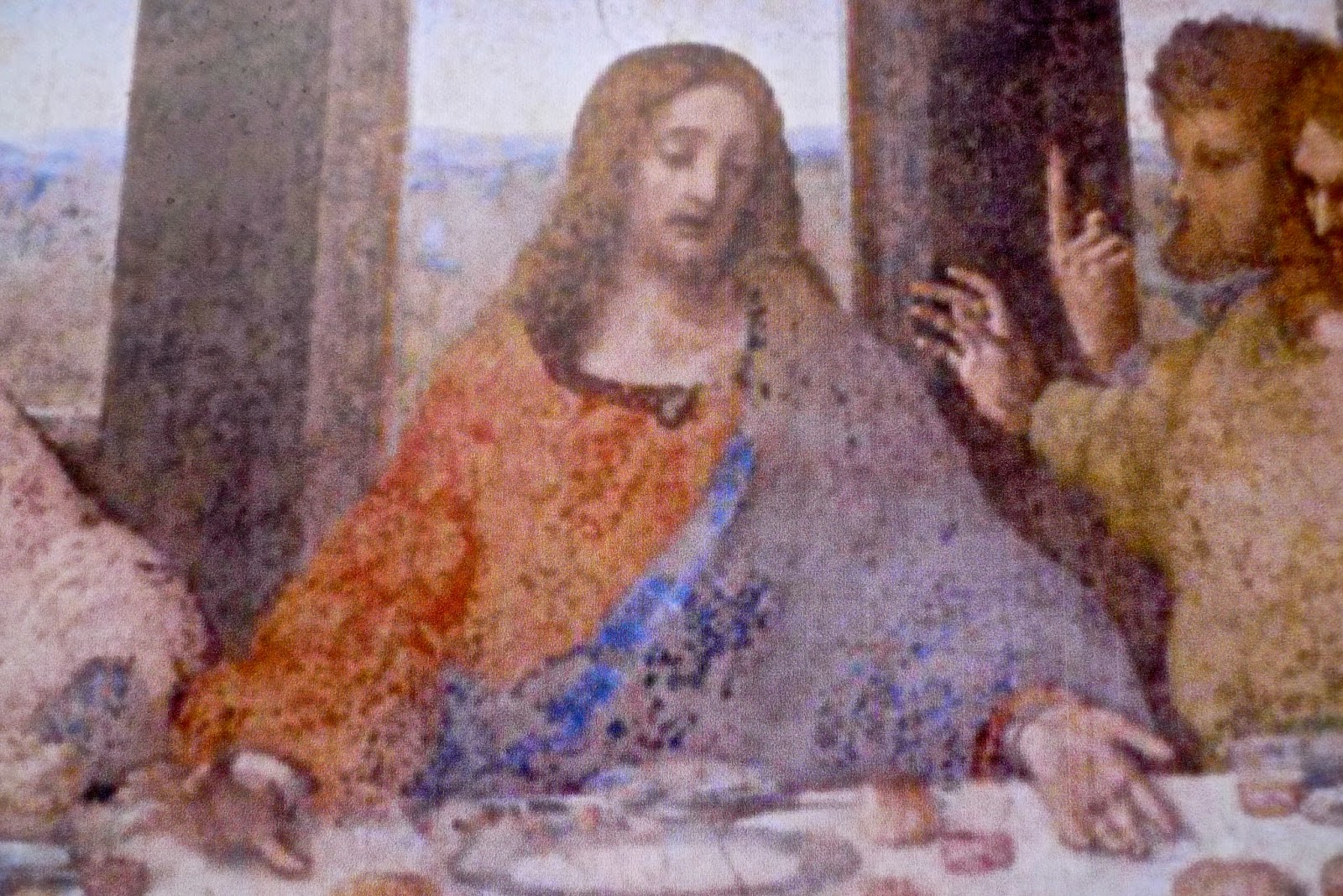 Center panel
Jesus - the central figure in this painting, calmly lays out what is to come. 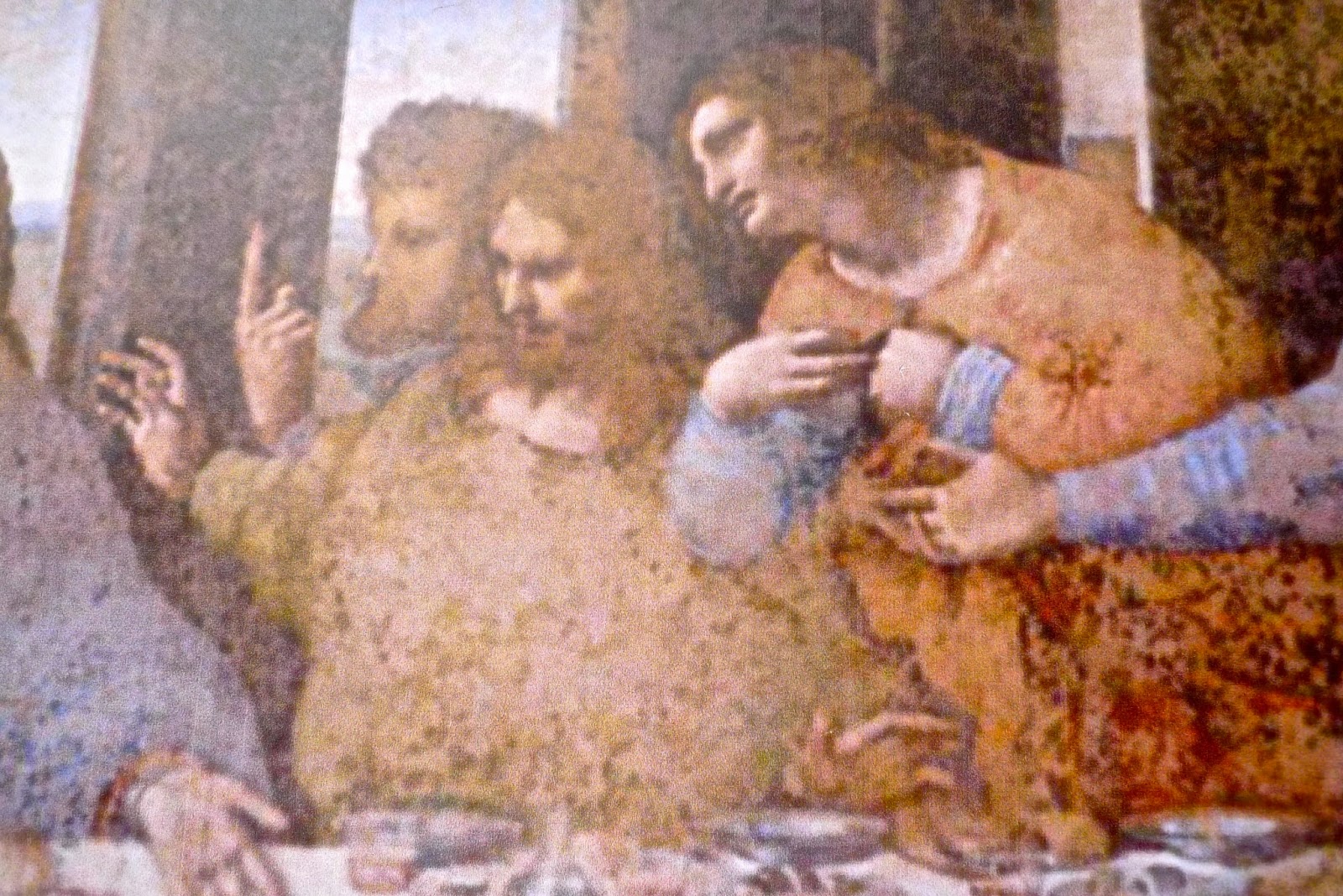 Center-right panel
Thomas, James the Greater, and Philip
(Thomas - with his raised index finger, perhaps to suggest the resurrection of Jesus from the dead; James the Greater - with his arms stretched out, may be flabbergasted at the thought of a betrayal; Philip - may seem to be begging for some answers.) 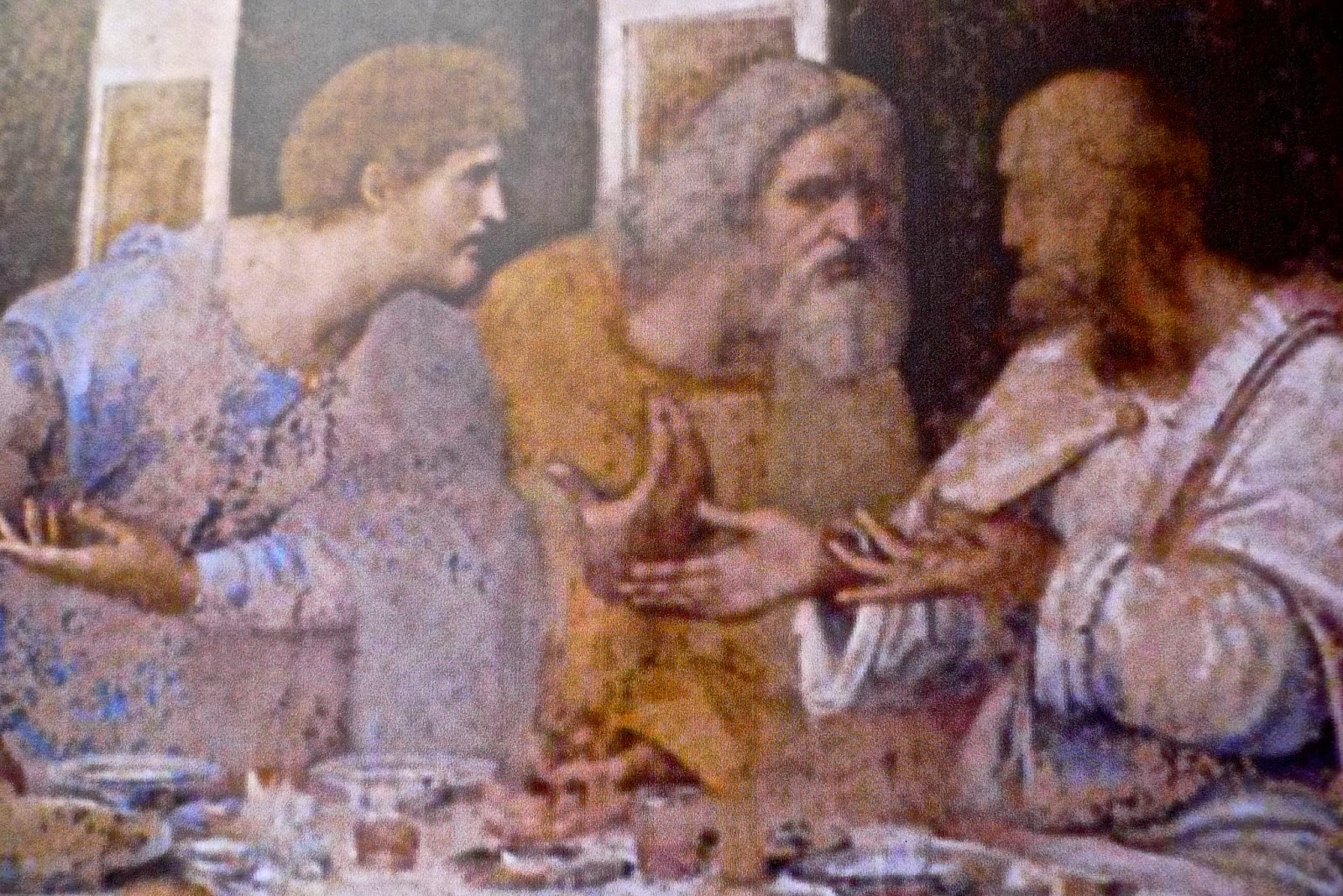 Right-most panel
Matthew, Jude Thaddeus, Simon the Zealot
(Matthew and Jude Thaddeus are looking at Simon, maybe speculating and wondering who the betrayer was going to be.)


When put side by side, the panels make a complete picture of the Last Supper. As I looked at the characters in this painting, I had an ongoing dialogue with them, as well as with the artist. Da Vinci's study of the characters is so full of emotions and feelings that it helps put me in this scenario, making me experience intense feelings, as well.

He seemed to have a symbolic use for the number 3. For one, he grouped his apostles in threes. For us Christians, the number 3 represents the Holy Trinity. With the progressive deterioration of the painting, we are no longer able to see much of the original details, and, perhaps, more symbolisms employed by da Vinci, which is also due in part to restoration efforts.

Leonardo's assistants made copies of the Last Supper. A copy by Giampietrino can be found in the collection of the Royal Academy of Arts in London, painted  almost up to the original size. Another one, although with some modifications of the background by Cesare da Sesto, is in the Church of St. Ambrogio, in Ponte Capriasca, Switzerland. 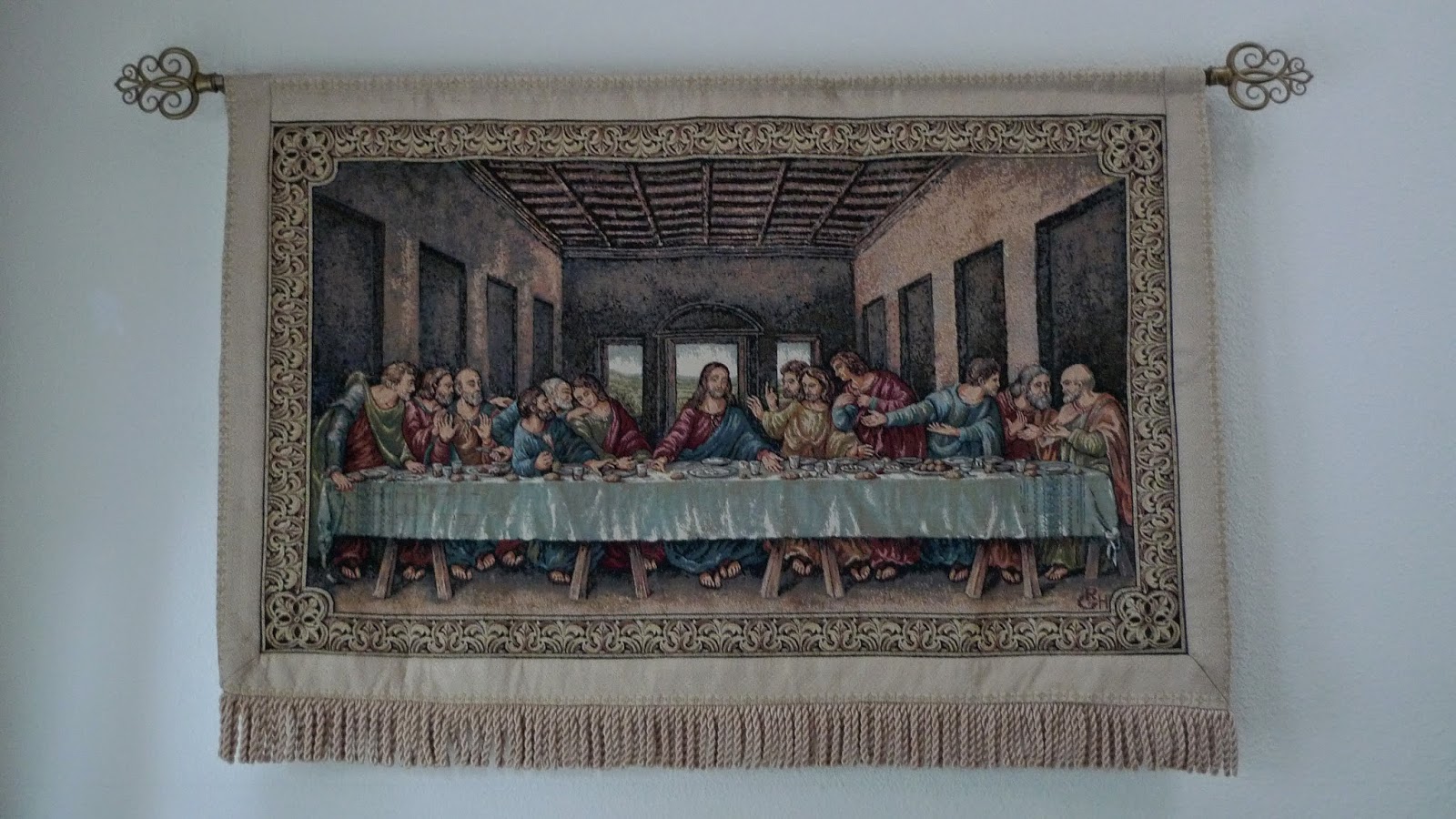 A tapestry of the "Last Supper" design by Leonardo da Vinci

As for me, I am happy to have this tapestry. After visiting Milan and seeing this work of art, I remembered that I had bought a tapestry of the Last Supper in the market in Florence, about fifteen years before. I took it out and finally finished the border. It now hangs in my dining room.

This truly was a great  piece of sacred art. It continues to be acknowledged as such, up to the present day.