The Poinsettia - the Christmas flower, has a very interesting history. Joel Roberts Poinsett (1779-1851) - the first American ambassador to Mexico, can be credited for bringing this flower-plant specie to the United States.

In 1828, Ambassador Roberts, who was visiting the Taxco region, discovered and fell in love with a ruby-red flowered plant. A doctor and a soldier by trade and an amateur botanist, he took clippings of the plant and sent them back  home to Charleston, South Carolina. Upon his return, he shared his plant clippings with a friend - Mr. Buist of Philadelphia, who, in turn, sent it to Mr. James Mc Nab, who, subsequently, brought it to the Botanical Garden of Edinburgh. 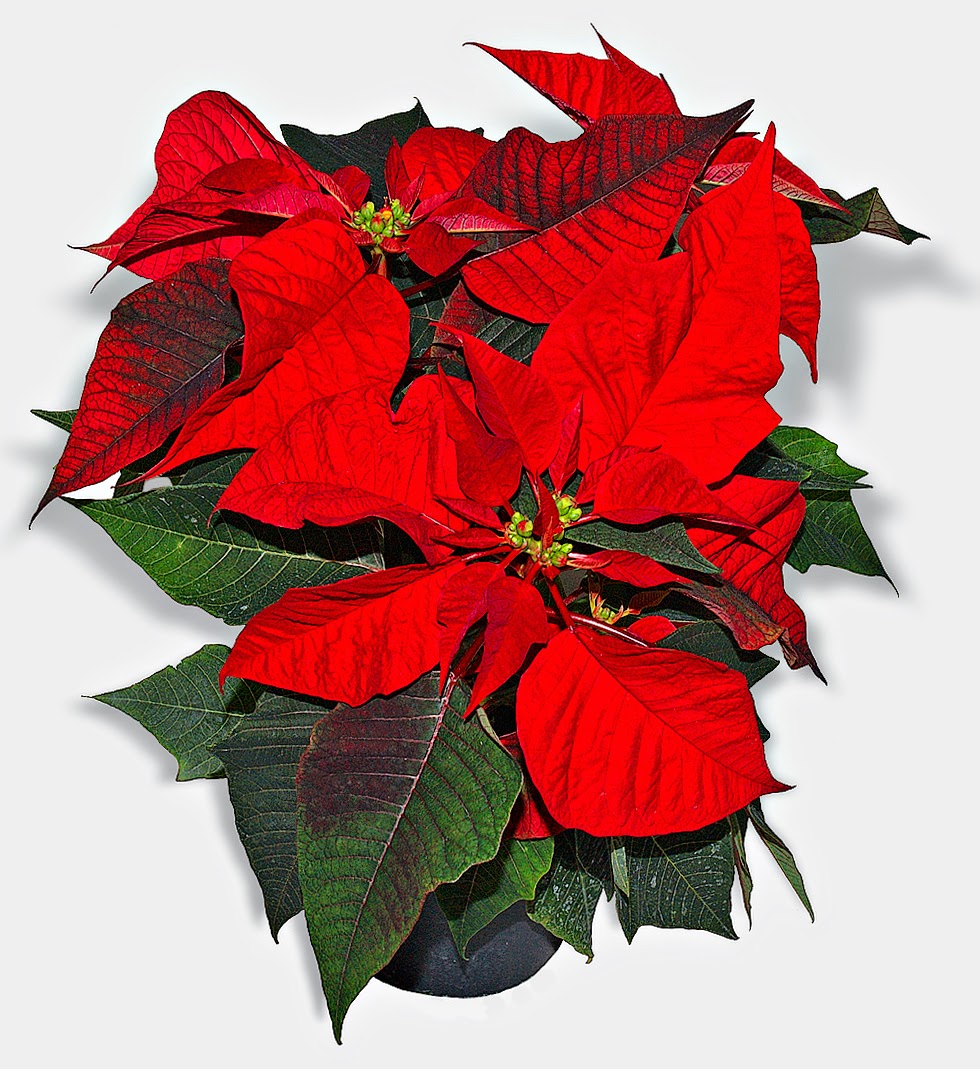 A German botanist, Wilenow, had named Poinsett's plant discovery as Euphorbia Pulcherrima, in 1833. Hickling Prescott - a gardener and botanist who was given the task to rename the flower plant.  By 1837, the plant was renamed to Poinsettia Pulcherrima, in honor of Poinsett - for his achievements in government and horticulture. Hence, we have come to know this plant as Poinsettia, which we now find just about everywhere, during the holiday season.

In Mexico, the Poinsettia was called Cuetlaxochit by the Aztecs. The name signified "Flower that withers, mortal flower that perishes like all that is pure." It was cultivated as a gift from the gods and Montezuma (1480-1520), who was the last Aztec king to reign. The red-blood color of the flower, "served as a reminder of the sacrifice the gods made to create the universe, and the debt which would be repaid with human sacrifice." The plant's sap was used by the Aztecs as a cure for fever and its leaves were used to make a dye.

When the Franciscan missionaries settled in Taxco del Alarcon in the 17th century, in Southern Mexico, the flaming-red wild flower was used in the Christian ceremony during the nativity procession - La Fiesta de Santa Pesebre. Many stories point to this time as to how the Cuetlaxochit (Poinsettia) became to be called la flor de Nochebuena or Holy Night (Christmas Eve) flower.

Legend has it that there was a poor, young Mexican girl - Pepita - who was heartbroken that she had no money to buy a present for the Baby Jesus. As she was in tears, an angel appeared to her and instructed her to gather a bunch of the weeds growing around the area. And when her tears fell upon the weeds, they miraculously turned into beautiful, red blooms.

Another legend refers to a time when the Franciscan friars  were celebrating Christmas with a nativity scene they had lovingly decorated. During the mass, when the star of Bethlehem passed overhead, the leaves had turned from green to bright red. Since then, the Cuetlaxochit (Poinsettia) became the symbol of Christ's blood and became associated with the Christmas season.

In Mexico, the Poinsettia - la flor de Nochebuena, is displayed on Dia de la Virgen on December 12.  On December 12, the feast of Our Lady of Guadalupe - the Patron of the Americas, is celebrated in the United States. Poinsettia Day falls on December 12, in remembrance of the date in 1851 when Joel Roberts Poinsett died.

The Cultivation of Poinsettia

At Ecke Ranch, in Encenitas, California, the Poinsettia varieties are cultivated all year round to keep up with the growing demands for this favorite Christmas flower plant during the holiday season.

In 1911, Paul Ecke started marketing the Poinsettia as the Christmas flower, as its blooming cycle coincided with the winter season, around the celebration of the holiday season. At first the Poinsettias were grown in the fields and shipped to commercial greenhouses to grow for their local markets. 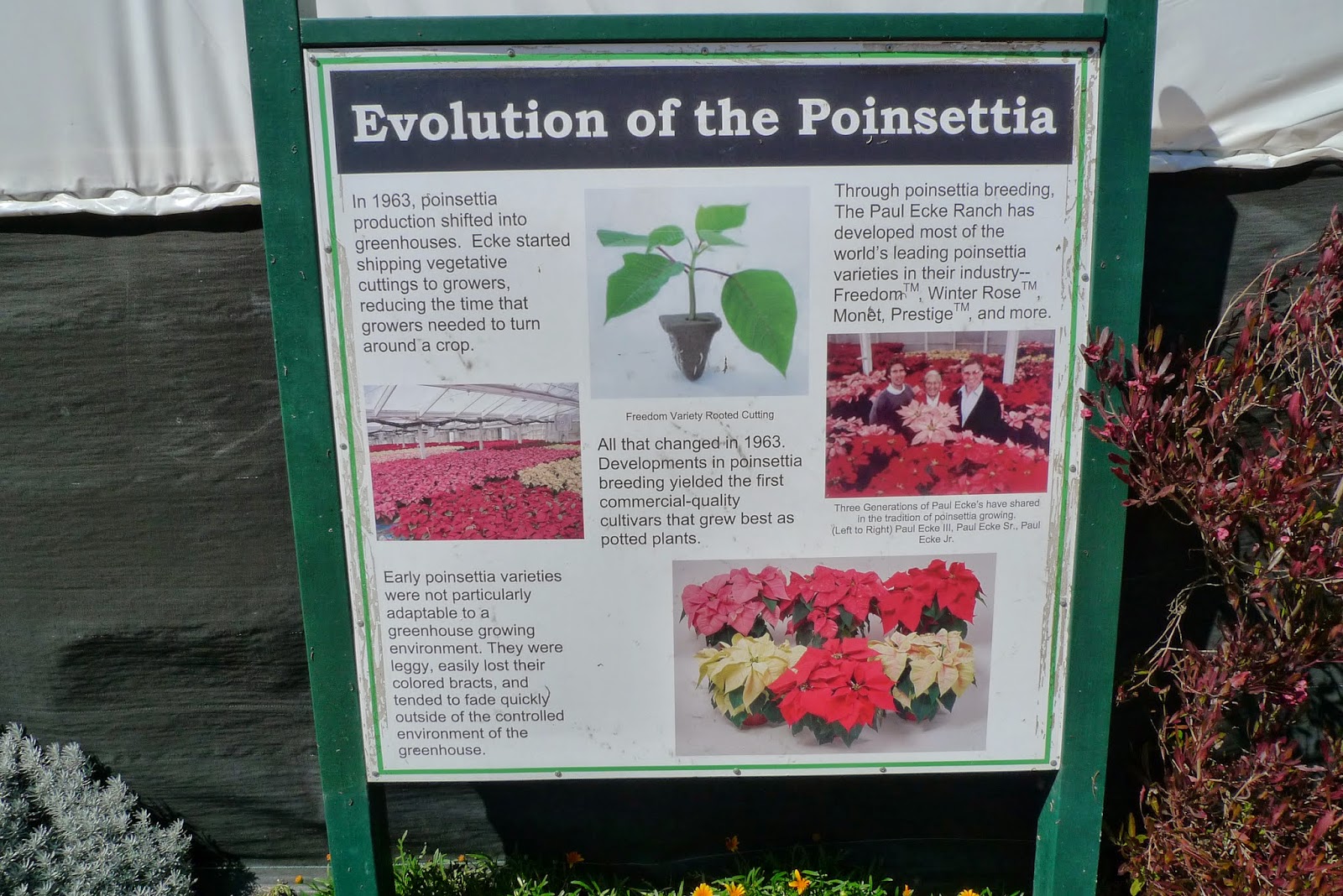 By 1963, there was a change in the production as it shifted from field planting to greenhouses. They have since developed their breeding technics and have come up with some of the leading Poinsettia varieties in the world. Three generations share this breeding traditions to continue to bring us these seasonal Christmas flowers.

Some of the Poinsettia Varieties at Ecke Ranch 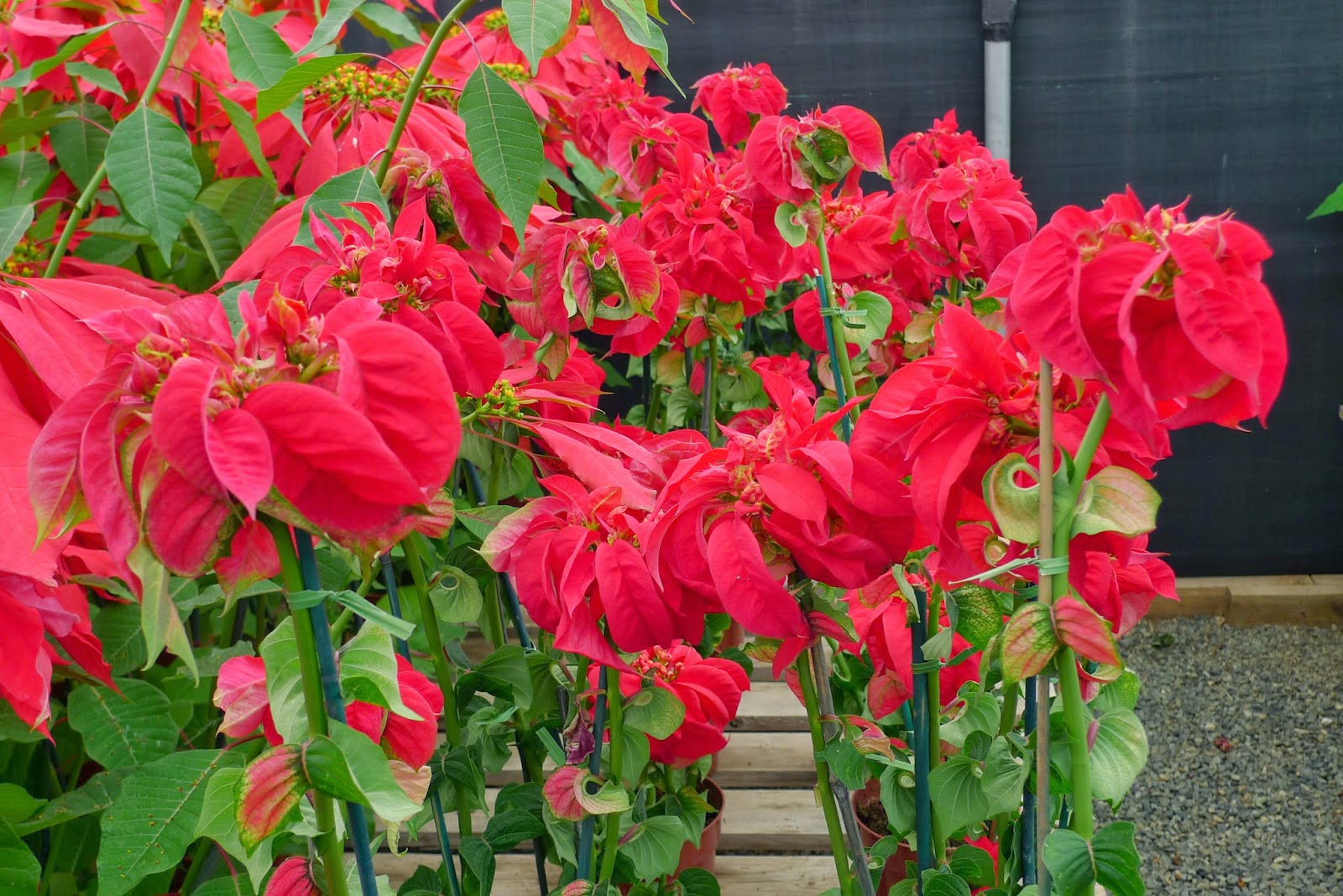 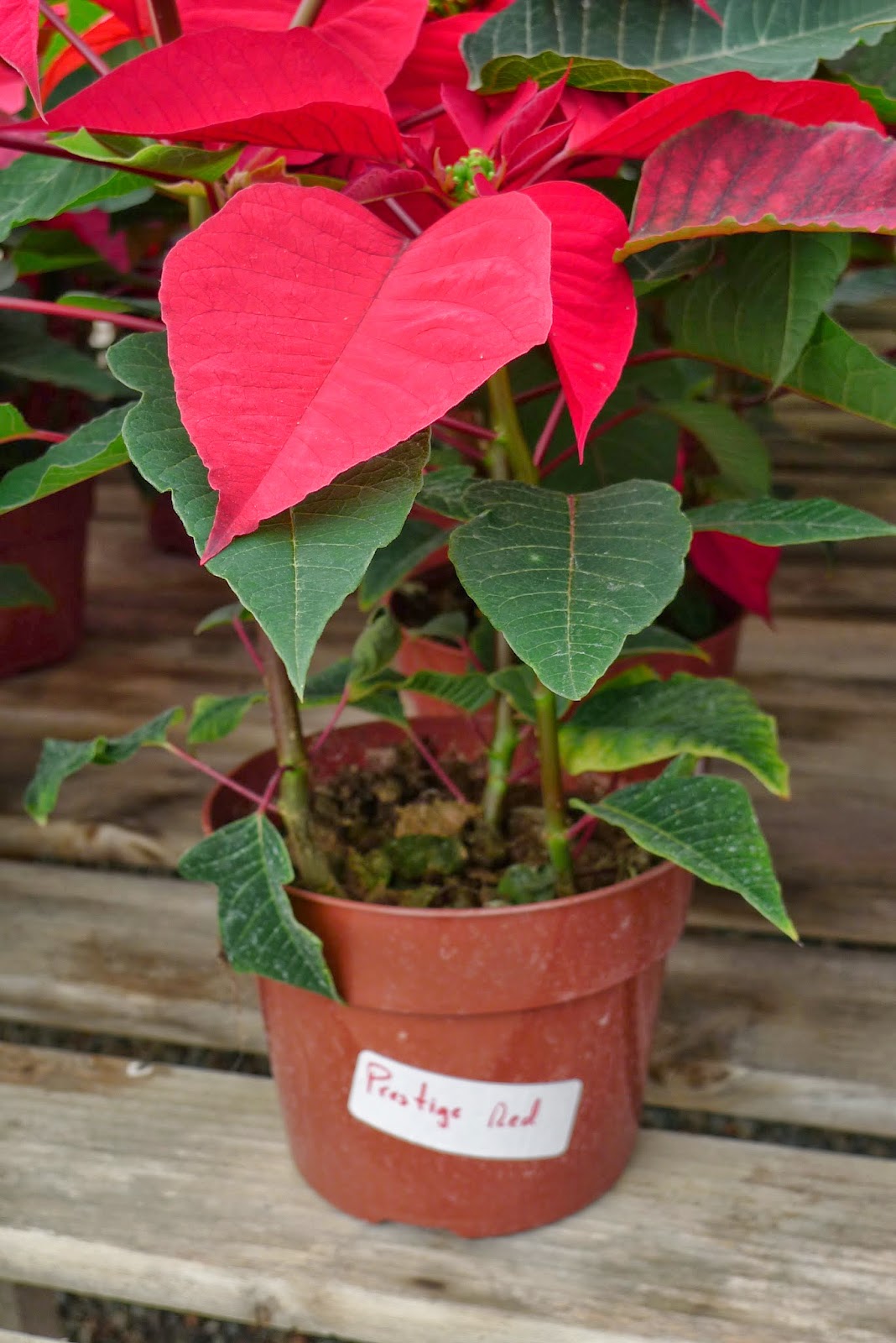 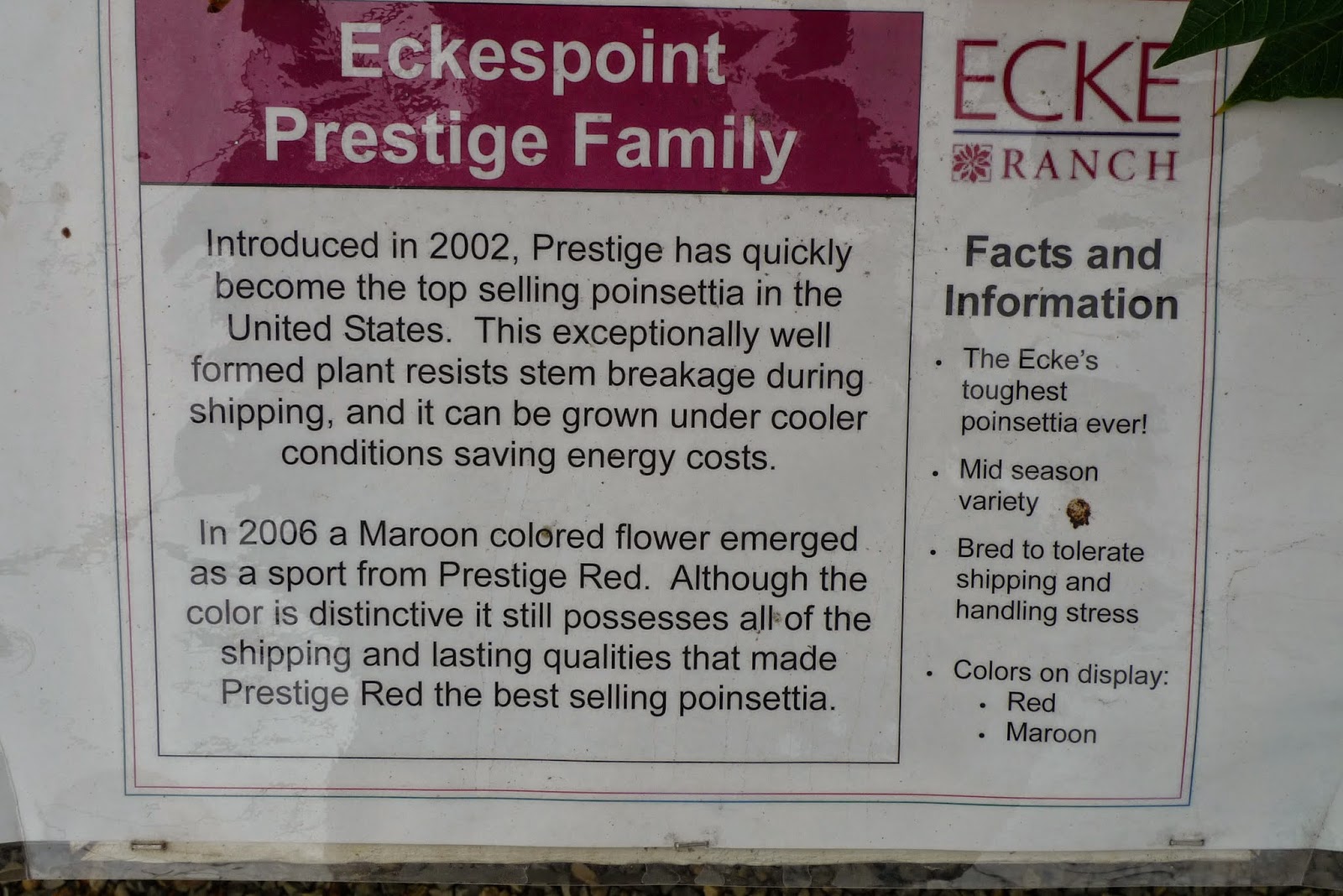 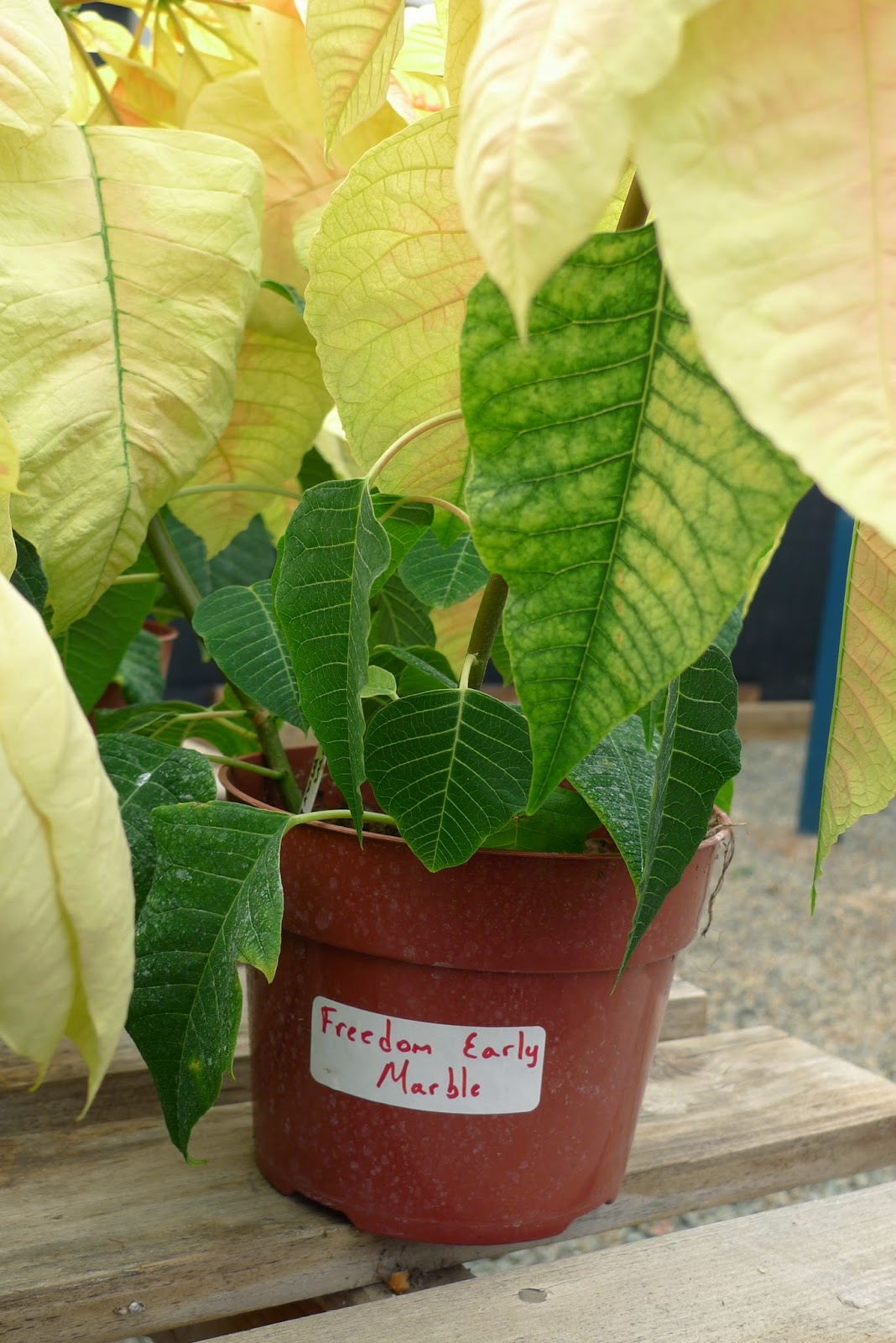 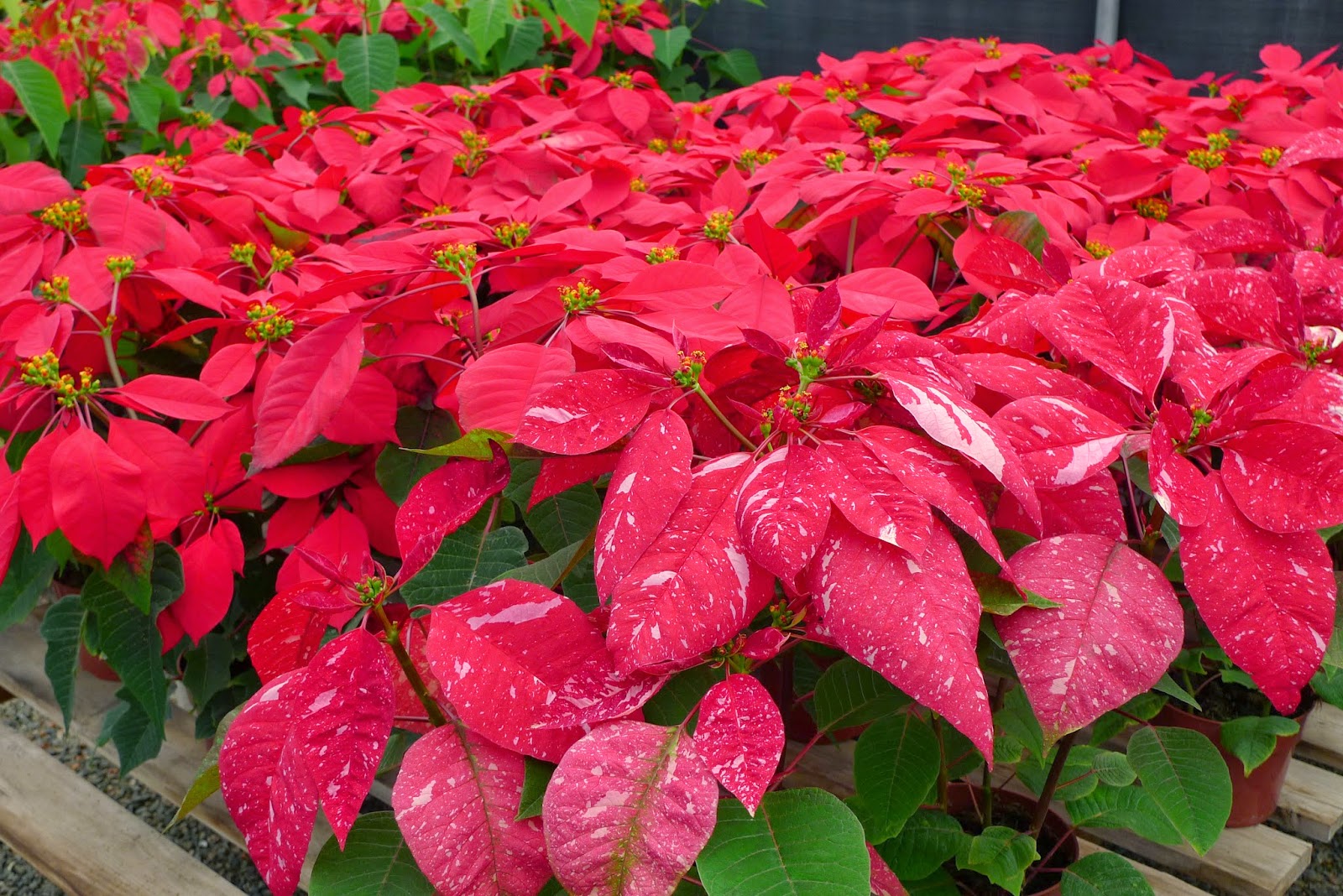 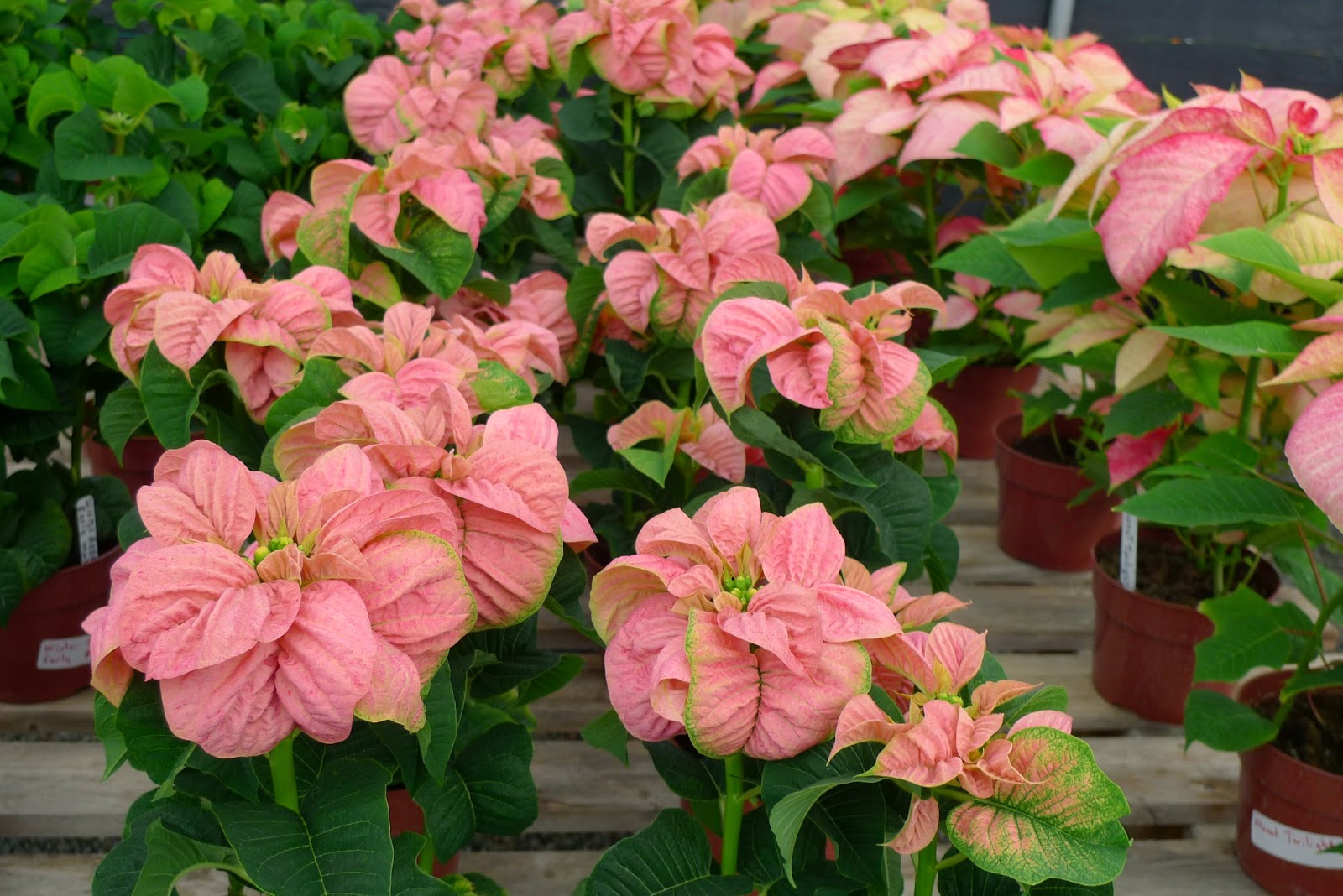 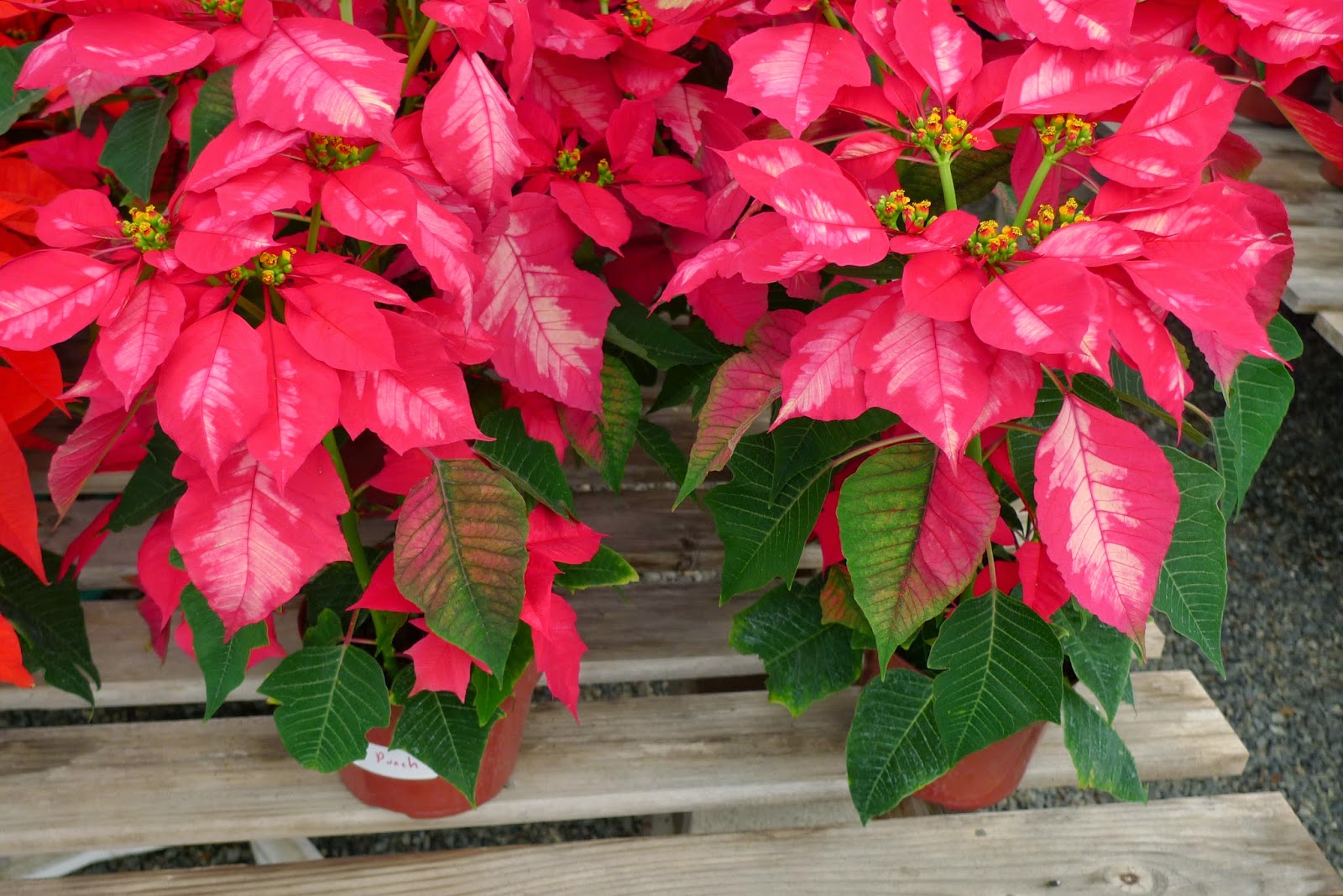 The parts of a Poinsettia plant

The actual flowers in a Poinsettia plant are the the small, yellowish things known as cyathia; the colored leaves that develop pigmentation after flower initiation are the bracts.

When days become shorter and nights are longer starting in mid-September in the Southern Hemisphere, the bracts begin to form their colored pigmentations. The growth phases are referred to as vegetative growth - the plant growth prior to flower initiation; the flowering stage is the reproductive stage which will take a couple of weeks. This can all be achieved with precision when time and growing conditions are taken into consideration. Here is more information about how you can successfully grow your own Poinsettia. 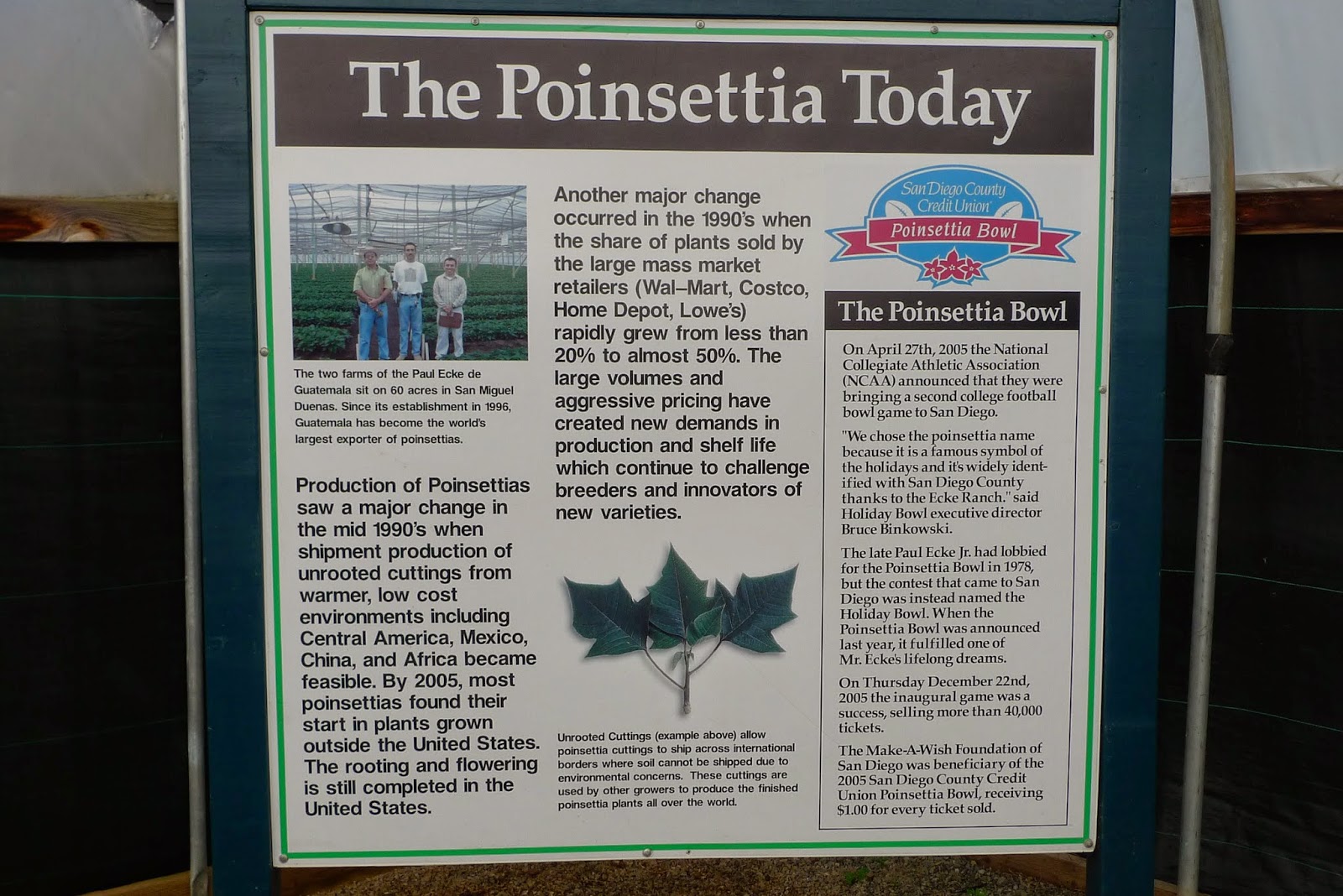 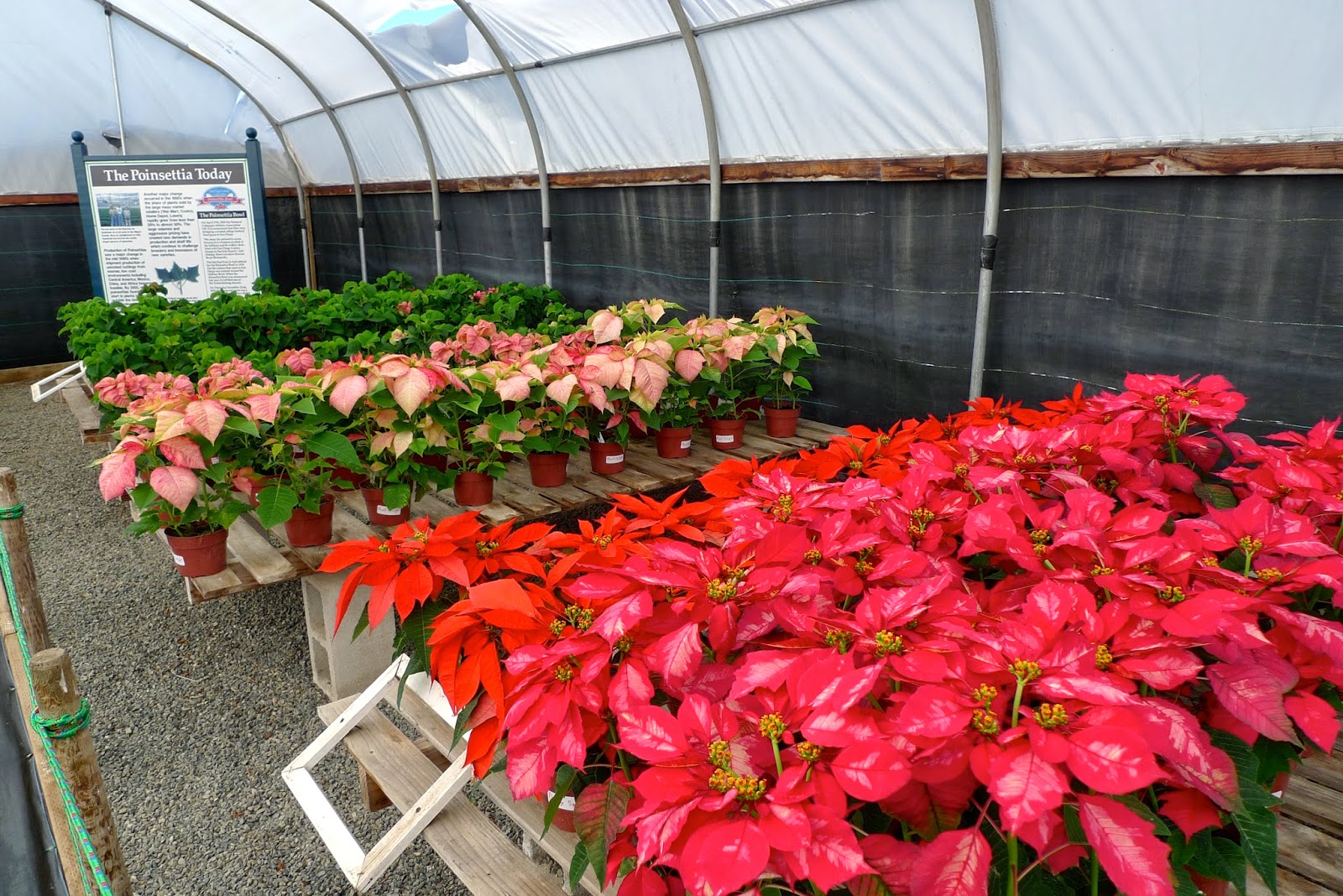 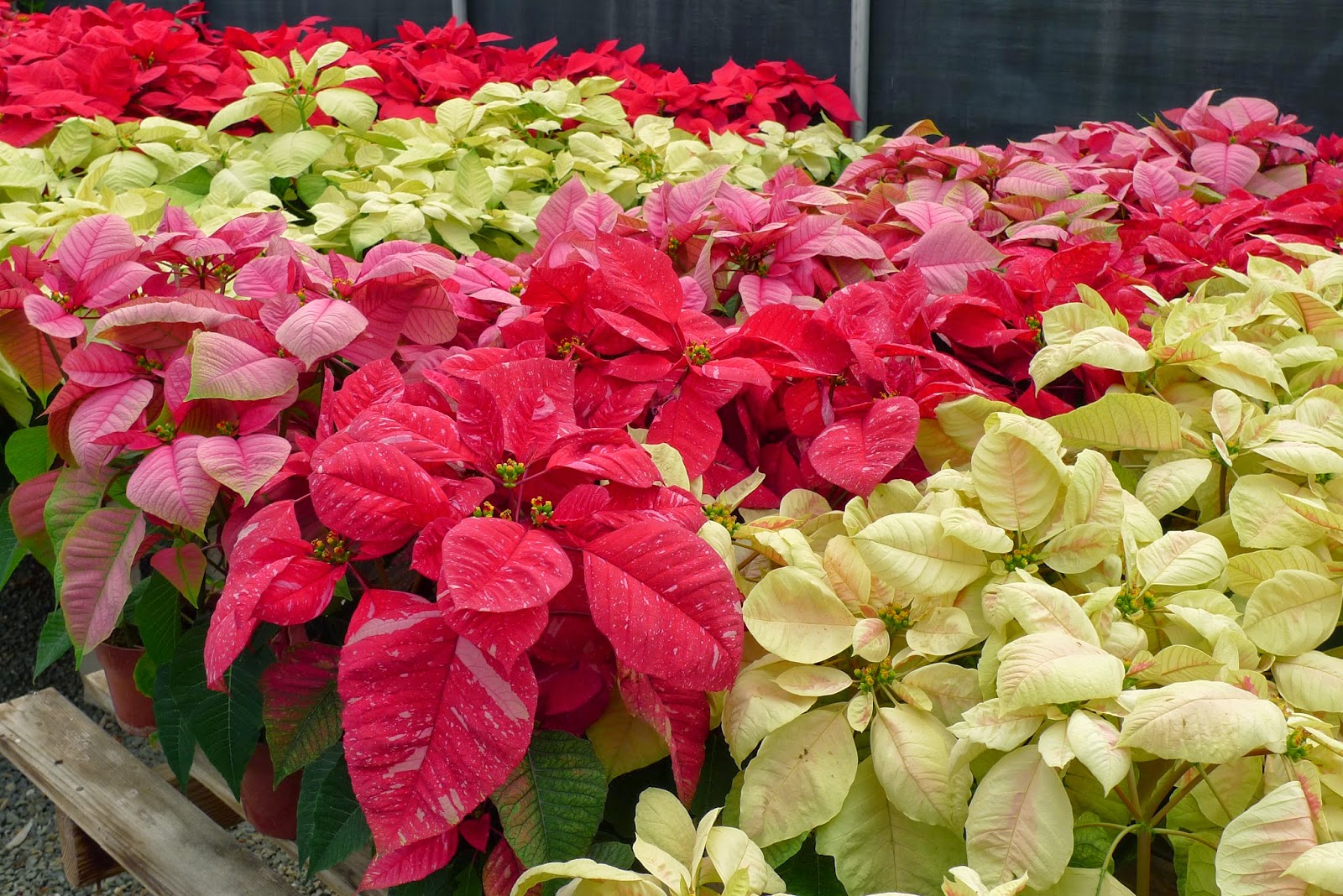 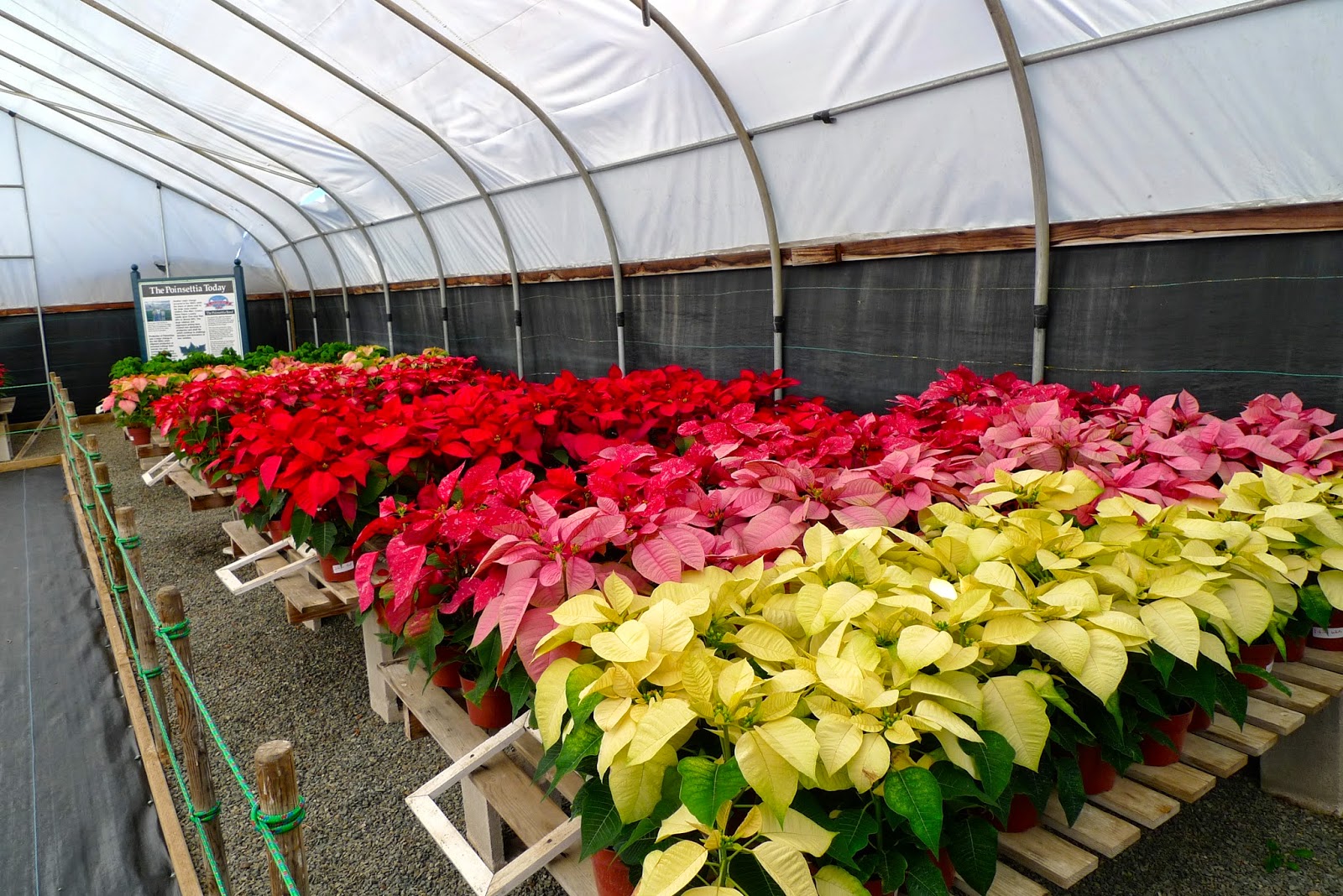 This holiday season, you can fill your homes and other places with the Christmas flower plant, Poinsettia, in different colors, if you please!

To buy directly from Ecke Ranch, here is their contact information:

Email: ccrysler@eckeranch.com
Posted by yolanda at 06:03