The 2014 Flower Carpet at the Grand-Place in Brussels, Belgium

In Brussels, there is a floral event called Flower Carpet, which takes place every two years on a weekend in August. When this takes place at the Grand Place in Brussels, it gets covered with a carpet made of flowers - of different varieties of begonia, at a staggering size of 77 meters by 24 meters.

The first flower-carpet event took place in 1971 with a landscape architect at the helm of this project - E. Stautemans of Zottegem. He was a product of the Ghent Horticultural College. After a series of creating floral events in different towns in Flanders, it culminated with the first flower carpet at the Grand Place. He had been designing and creating little flower carpets since the early 50s, using begonias which he loved. He discovered that using this flower in flower-carpet designs was a good means to promote his much favored flower plant.

As his works became famous - with his creative and imaginative use of begonias, he was commissioned to make floral carpets in other cities in Europe, and even in Buenos Aires and Columbus, Ohio. As he says, "Nowhere is the carpet more beautiful and distinguished than in the unique, ancient surroundings of the Grand-Place in Brussels." And it truly is, as we found out.

Begonias have become the ideal, major component in the creation of floral carpets due to their qualities. The begonia plant varieties produce beautiful and diverse flowers in many colors in rich and pastel shades, and do well even in bad weather and under full sunshine. Most of the begonia flowers  have been grown and cultivated from Ghent, putting Belgium as the number one begonia producer of about 60 million tubers per year.  Among the biggest importers of the tubers are the Netherlands, France, and the United States.

The flower carpet design for 2014 - inspired by the famous kilims of Turkey, which we also refer to as Persian carpets.

The 2014 project started with a theme that was determined in advance, around which a carpet design was created. The theme this year centered on "50 years of Turkish migration to Belgium." A plan detailing the stages of the carpet construction, usually prepared a year ahead, is executed, first, by making a scale model complete with symbolic representations, calculations of the amount of flowers to be used, and color sequencing. After all these details are ironed out, then the actual design is actually ready to be drawn on the ground, and the work begins according to schedule.

The work of putting the flower carpet together has been beautifully done in the past and to the present, by experienced and dedicated gardeners - along with their assistants, who work under time constraints to get to the execution of the final stage of the plan in a couple of hours.

On August 14, the pattern parts were worked on, first, with rolling out green turf in the spaces between the floral patterns. Then, the flowers arrived - packed together, 300 pieces for every square meter, and set directly on the ground (with no soil). In  six hours, the flower carpet had taken shape and was completed, and opened to the public at 10:00 p.m. 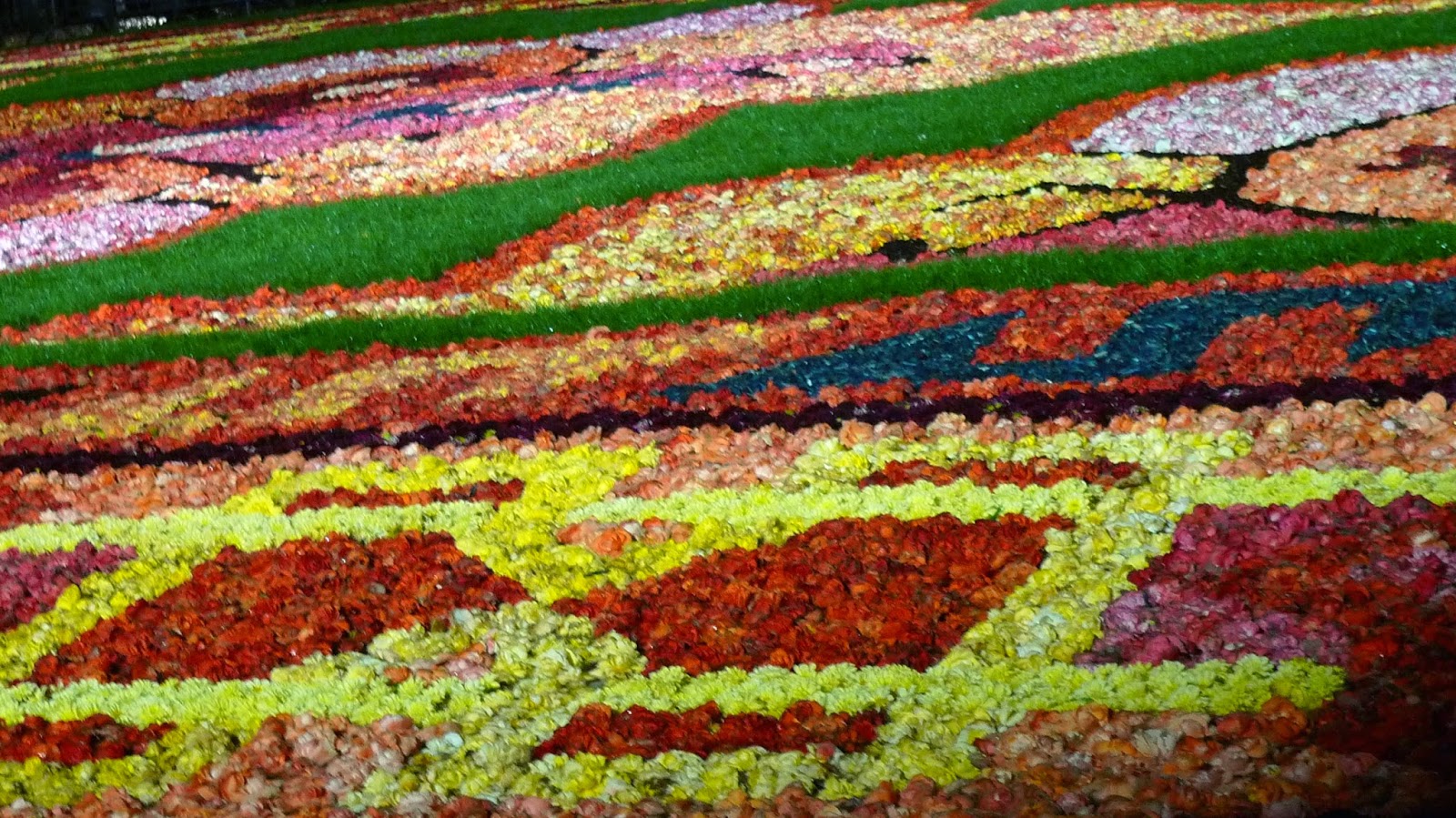 A view of the closely packed flower arrangements on the ground

Because of the daily rainfall at this year's event, there was no need to water the grassy areas and the tightly placed flowers. Adjustments are made on the care of the carpet depending on weather conditions. But after all these years, experience has given them the insights on how to deal with mother nature's changing patterns as they go about preserving the   carpet for three days.
The Grand-Place is a rectangular market square surrounded by ancient, beautiful public and private buildings in classical and Dutch architecture, dating back to the 17th century. After it was heavily bombarded and destroyed by French artillery under Louis XIV in 1695, the City Magistrate supervised the rebuilding of the medieval city back to its former glory.

The Town Hall - the Hôtel de Ville (City Hall) is a Brabant Gothic building that has become the most famous landmark of the Grand-Place. Built in the 15th century, it has undergone several transformations, from the time it was restored after its partial destruction after the bombardment of Brussels to the restorations in the late 19th century. Directly across is the King's House which has been occupied by the city museum in the last decades. On both sides of these two major public monuments - the City Hall and the King's House,  are houses occupied by private corporations - the Guild Halls. The Guild halls were built as Baroque structures in the 17th century. Each house has a name. Its exterior treatments, decorations and  other building attributes are representative of the status of the residents. With no church present in this vicinity, this square is purely seen as a center for mercantile and administrative functions.

All the buildings at the Grand-Place are listed monuments under the UNESCO Heritage program.

At the historical Town Hall, the doors were opened on August 15 to 17, from 9:00 a.m. to 11:00 p.m. From the balcony, a panoramic view of the flower carpet could be viewed. The Grand-Place has become the perfect setting for this beautiful event. Seeing it at different levels was our goal. 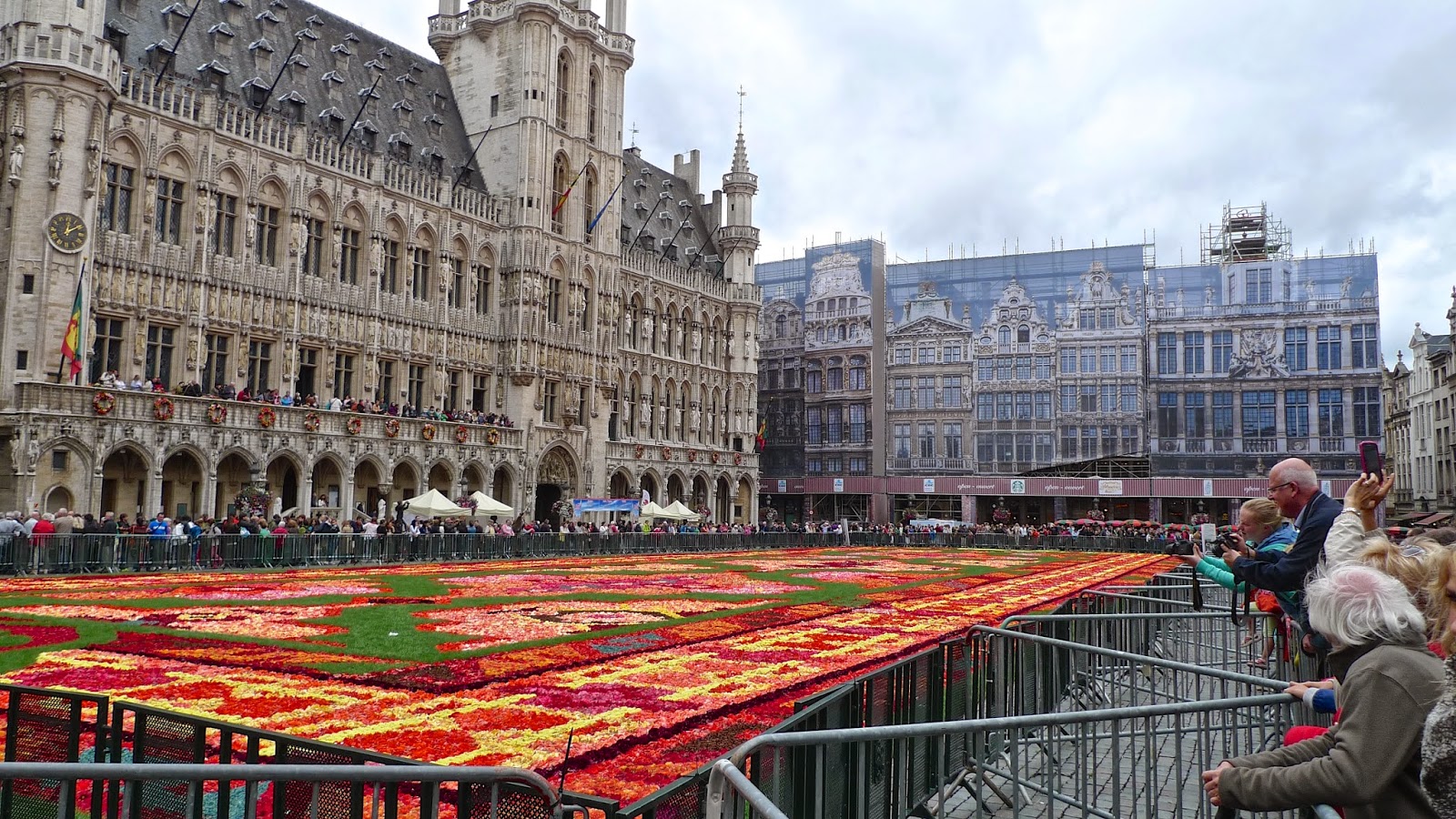 Carpet view from a couple of steps above the ground level
To the left is the Town Hall building. 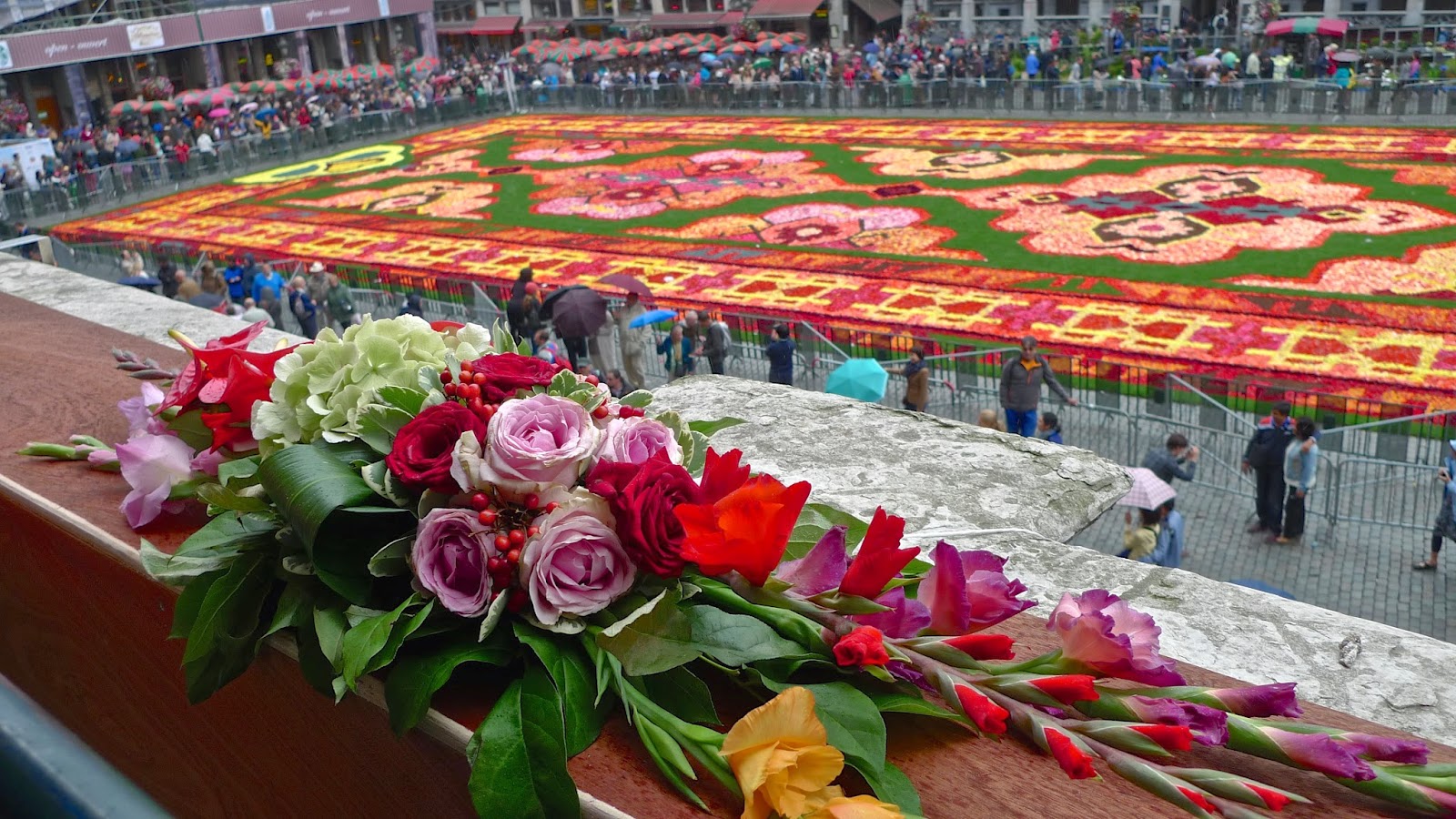 Tickets for this event were sold at 5€ each.  We got the chance to walk through the interiors of he Town Hall - seeing the different rooms used for different functions, with walls filled with paintings, tapestries, and ornamentation from past eras of centuries ago. The last stop was to be at the balcony, to spend a couple of minutes  to view the flower carpet. 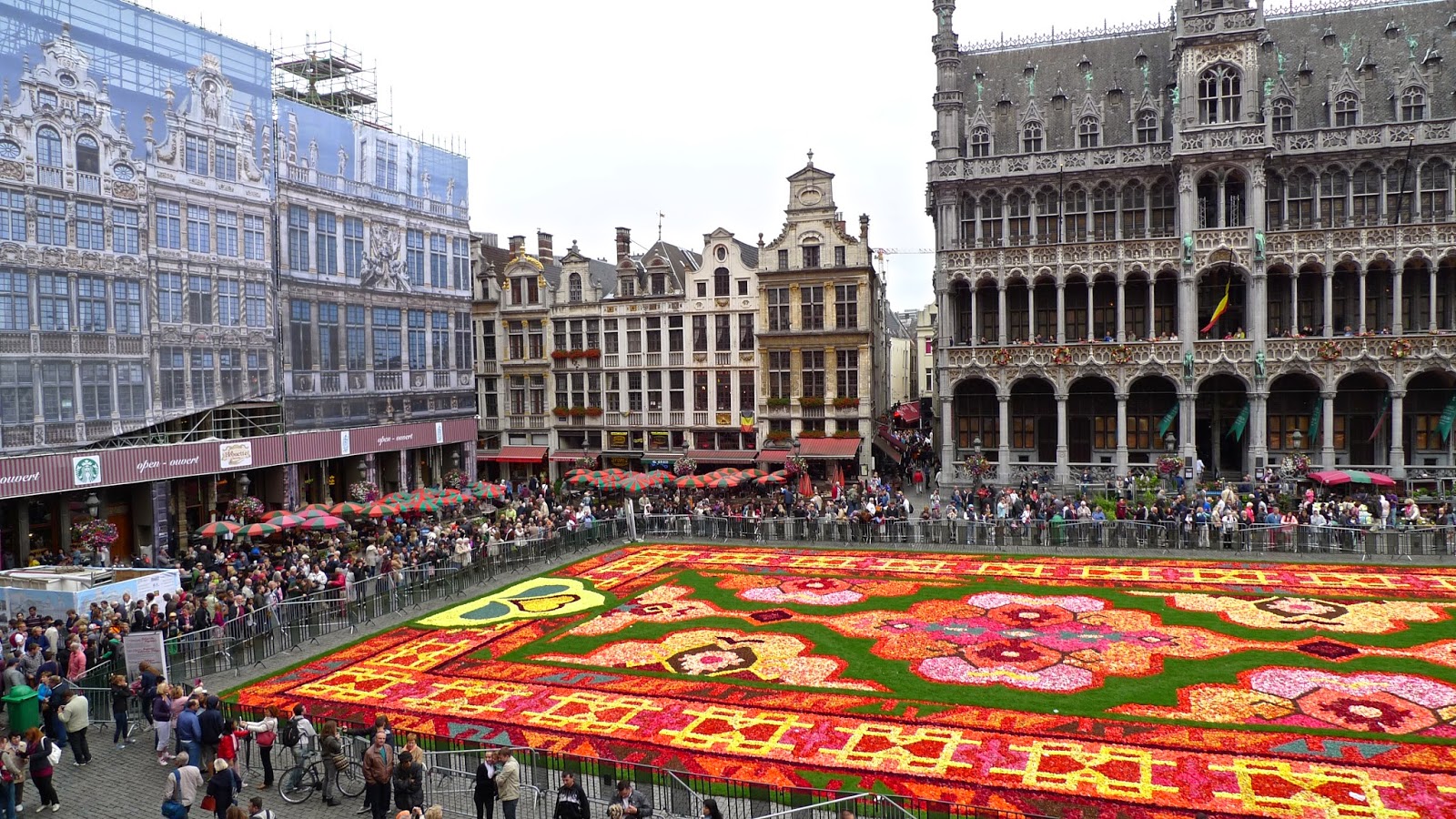 View to the left, from the balcony of the Town Hall 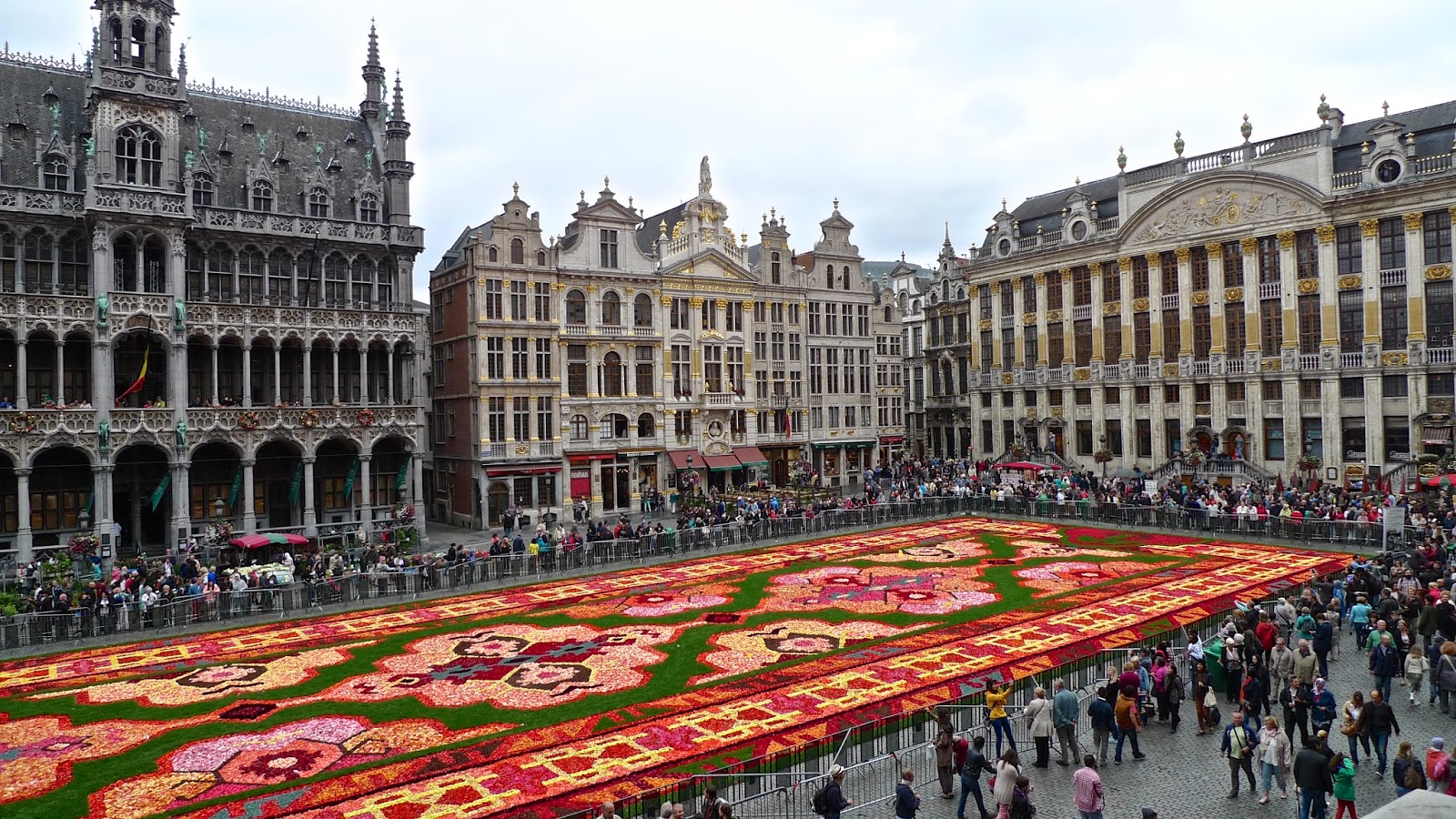 View to the right, from the balcony of the Town Hall 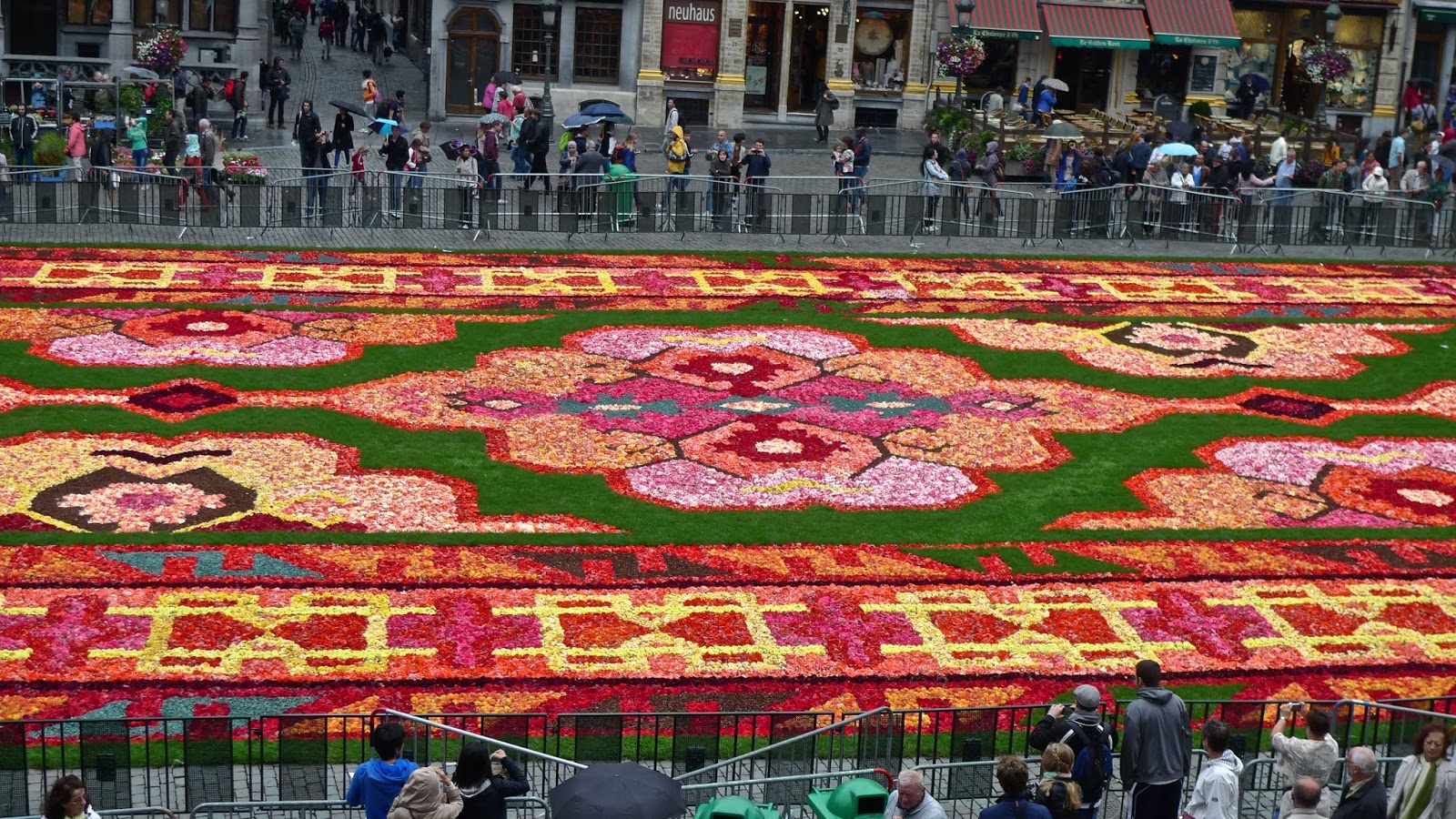 View of the he median design of the flower carpet, from the balcony of the Town Hall

The Grand-Place at night
Every night for three days, at 10:00, 10:30, and 11:00 p.m., the crowd was treated to a sound and light show about the "nomads who roam the Anatolian Fields."  It was on the last night that my friend and I were able to watch this, as we stood under the heavy rain. 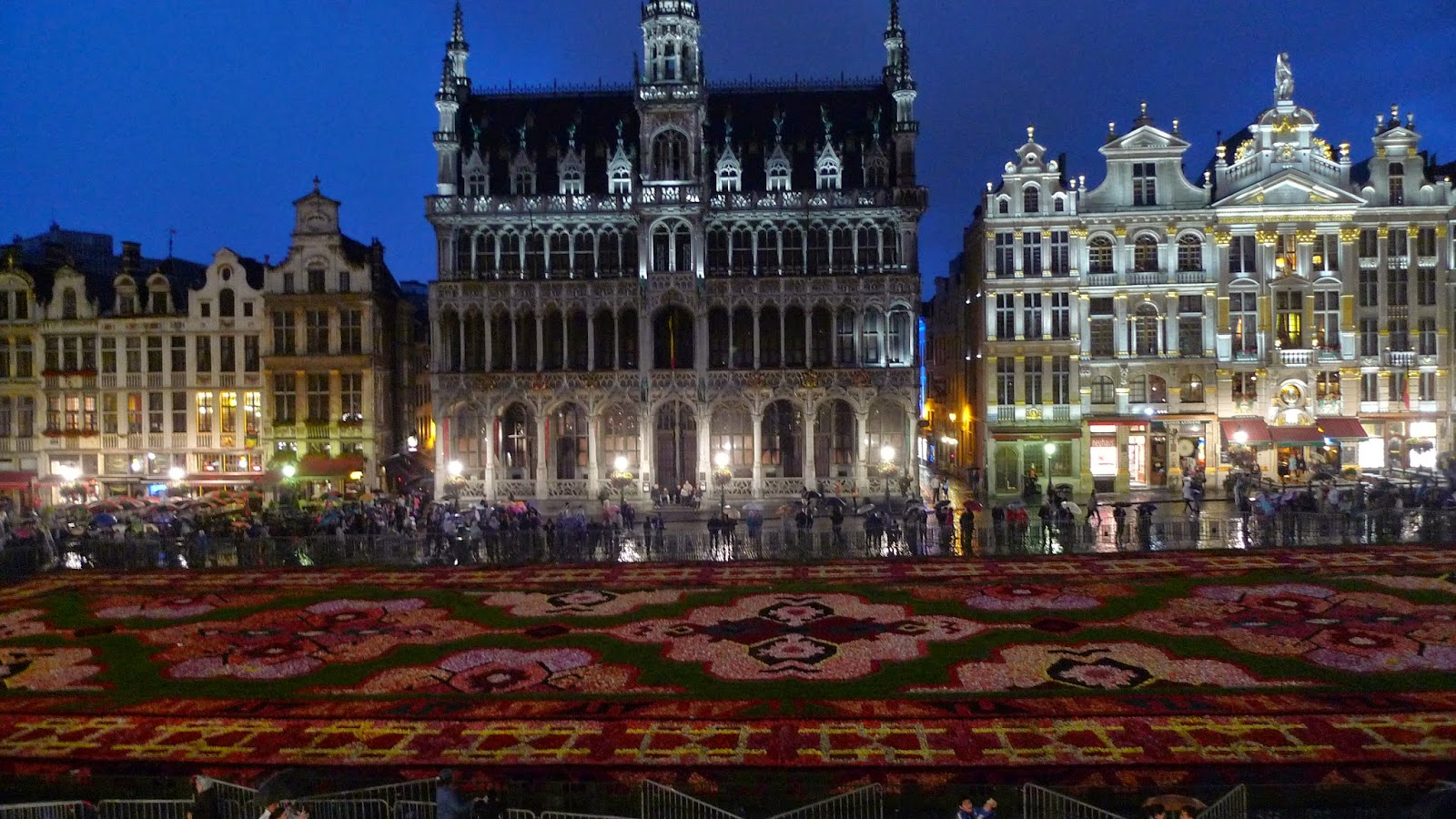 The Maison de Roi (King's House, opposite the Town Hall) - the building at the center, with Guildhalls on both sides. The light-and-sound show commenced on this building and progressed down to the flower carpet. 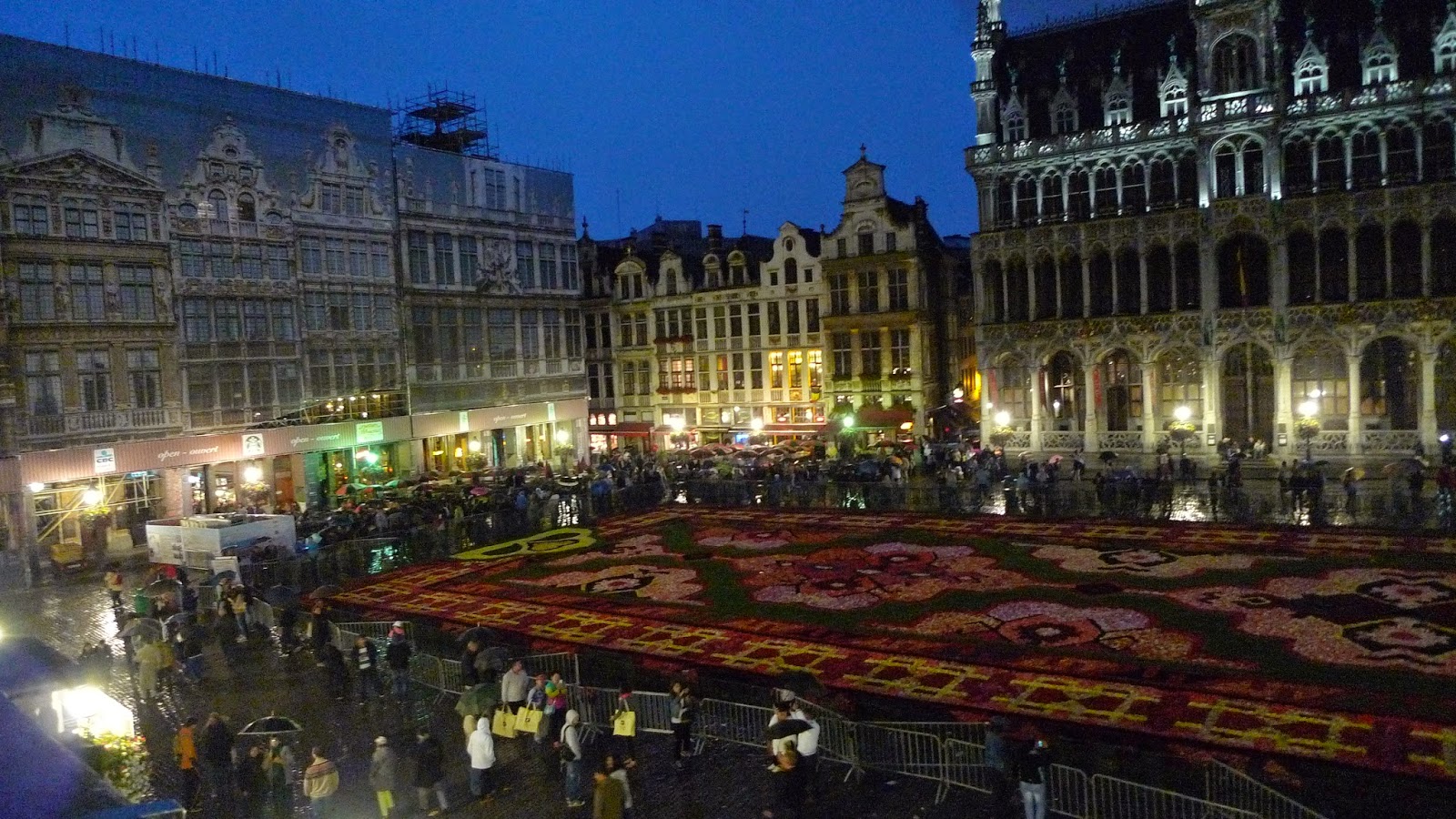 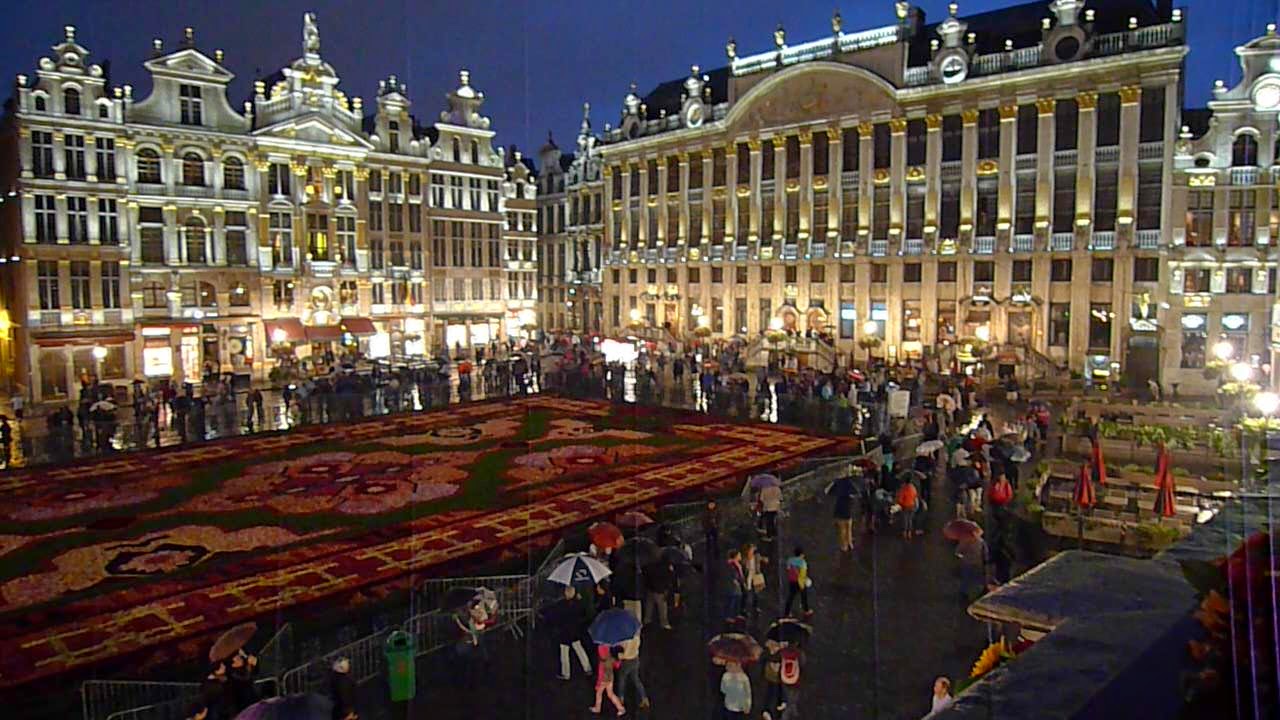 Several Guildhalls that surround the Grand-Place square -
all lit up for the night. 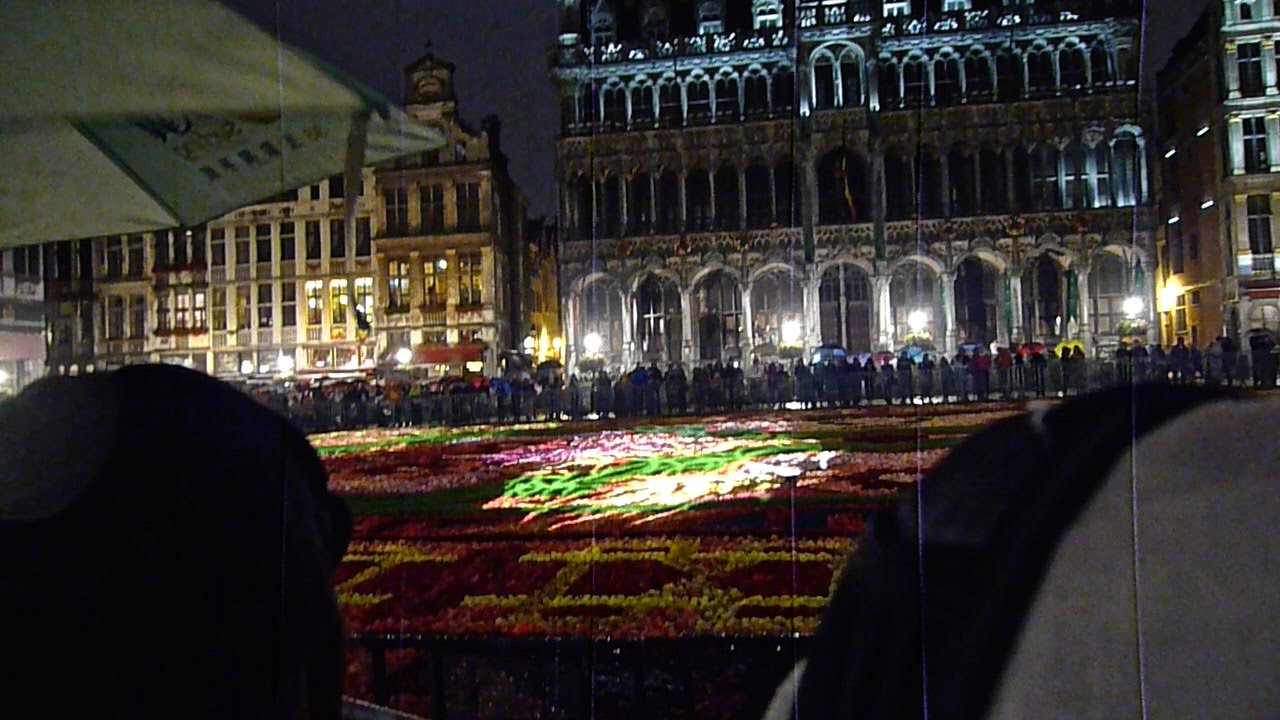 We caught a glimpse of the light show from the balcony (after buying another set of tickets for the night time) as the light show was going through a brief testing. 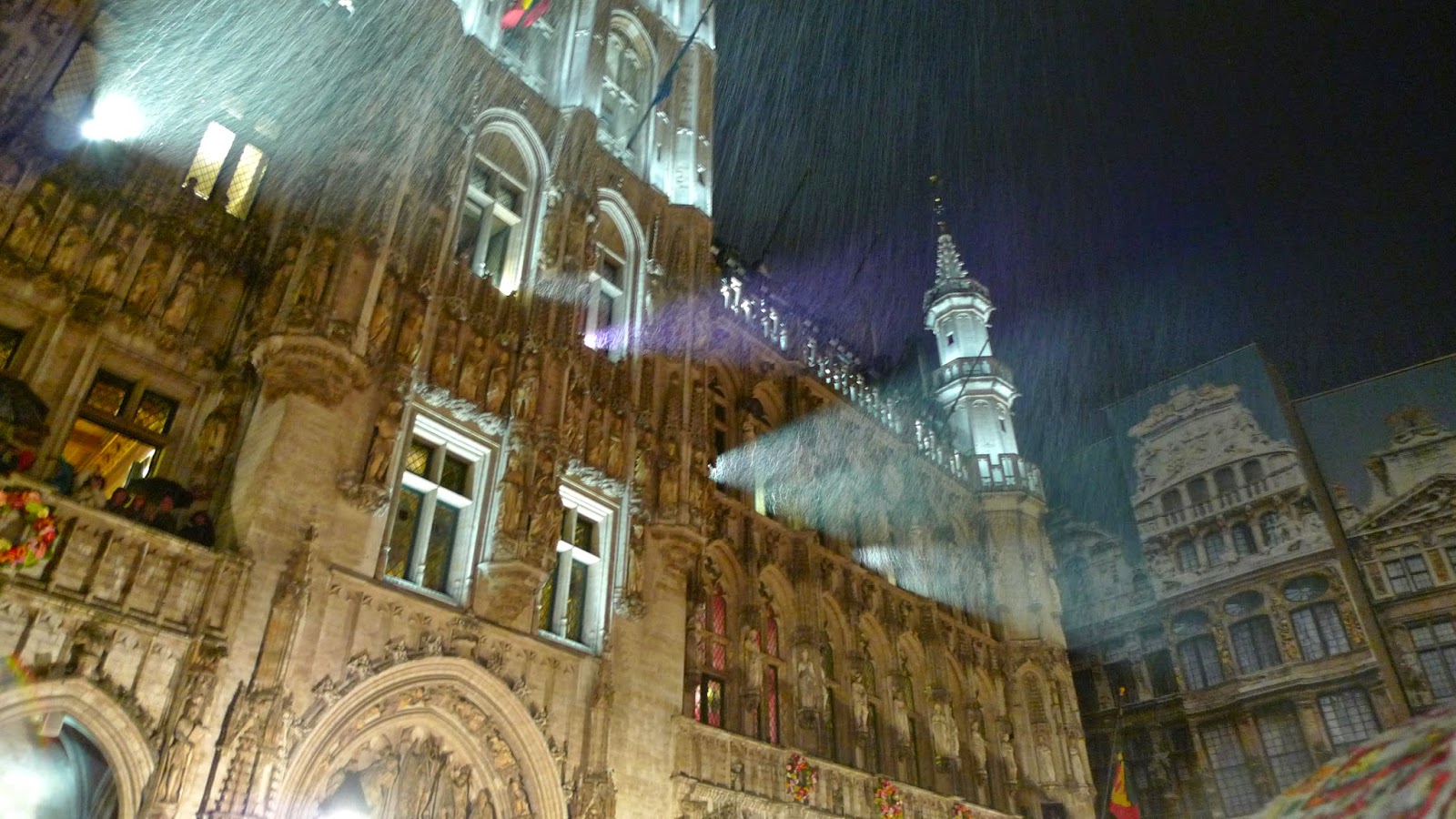 Strong torrential rain came down during the appointed time for the much-awaited show, drenching the enthusiastic crowd. But no one was deterred to stay on. 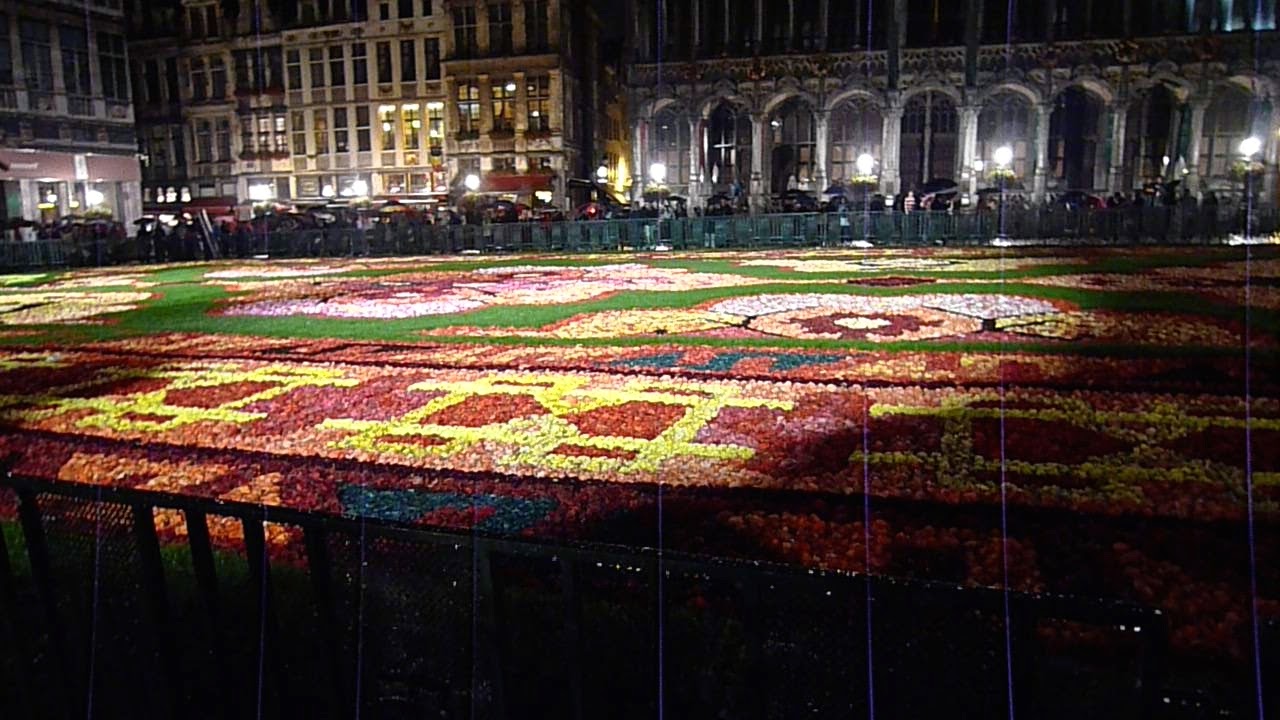 Back at ground level - the vertical lines on some of my pictures were caused by the steady stream of rain falling and forming on the joints of my umbrella, as they fell to the ground.. 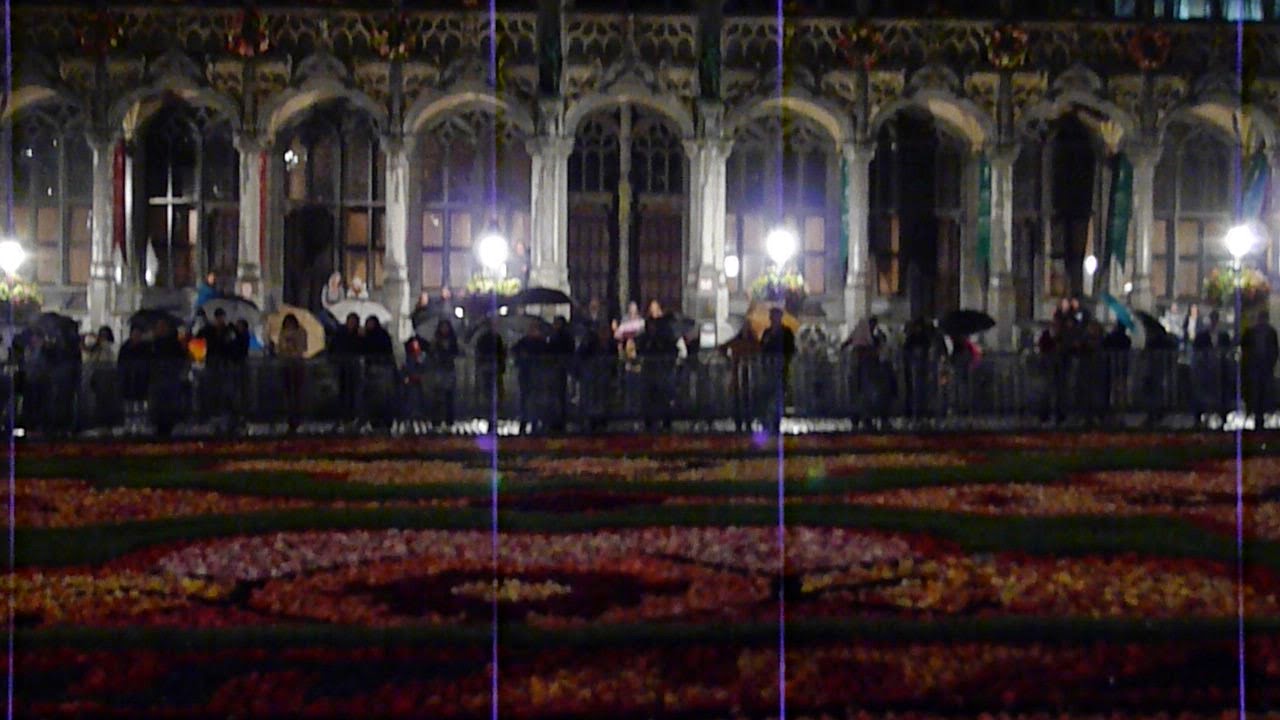 Ready in position to capture the much awaited moment, I took a video of the four-minute sound-and-light show, as people moved and accidentally pushed me from behind. Unfortunately, I was having problems uploading my video, and fortunately, I found this youtube link for you to watch, instead. 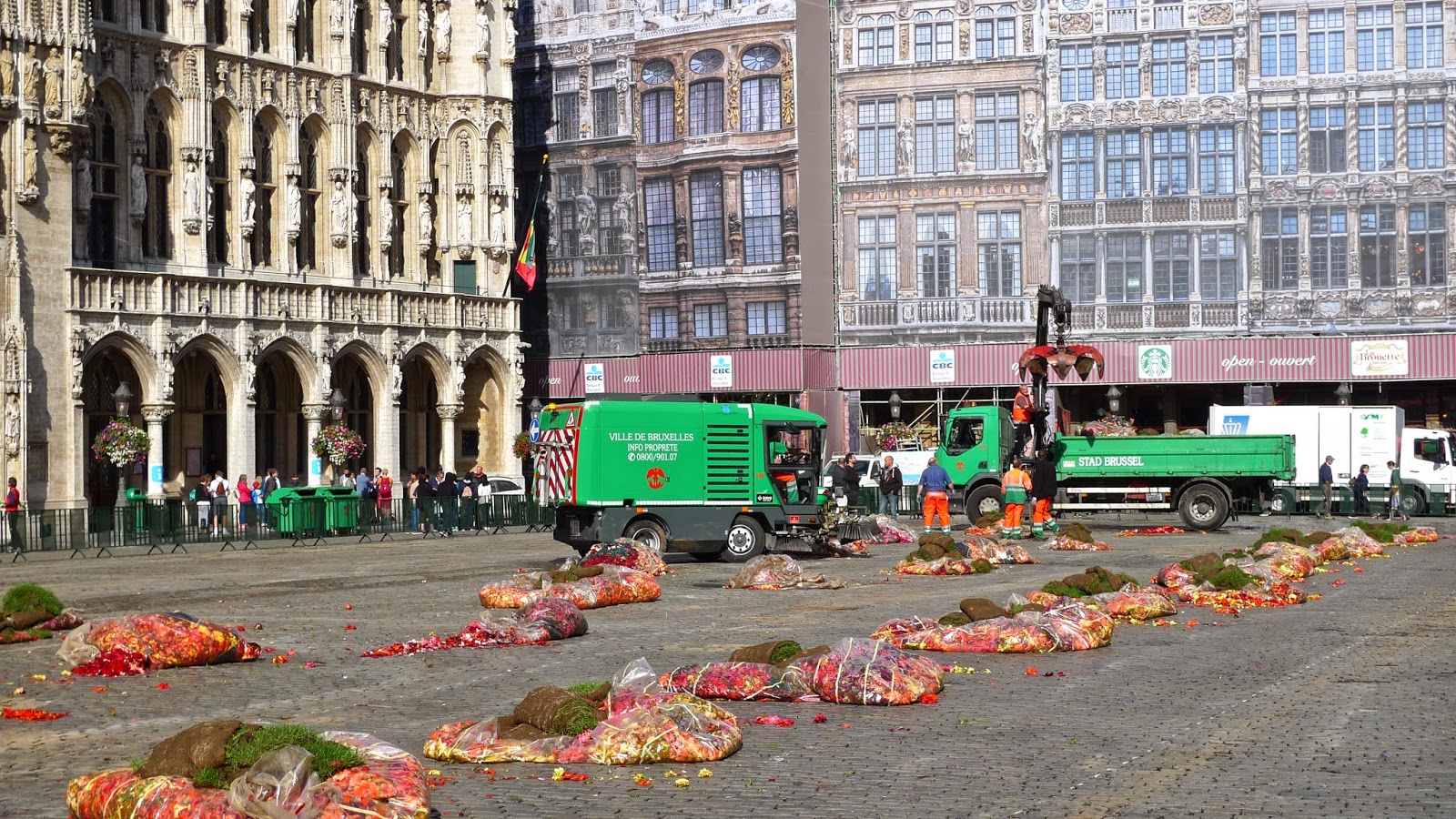 When Monday came around, it was clean-up day to put the
Grand-Place back to normal.

When you make your travel plans to Europe in 2016, you may want to take note of the dates of the next flower carpet event in Brussels. 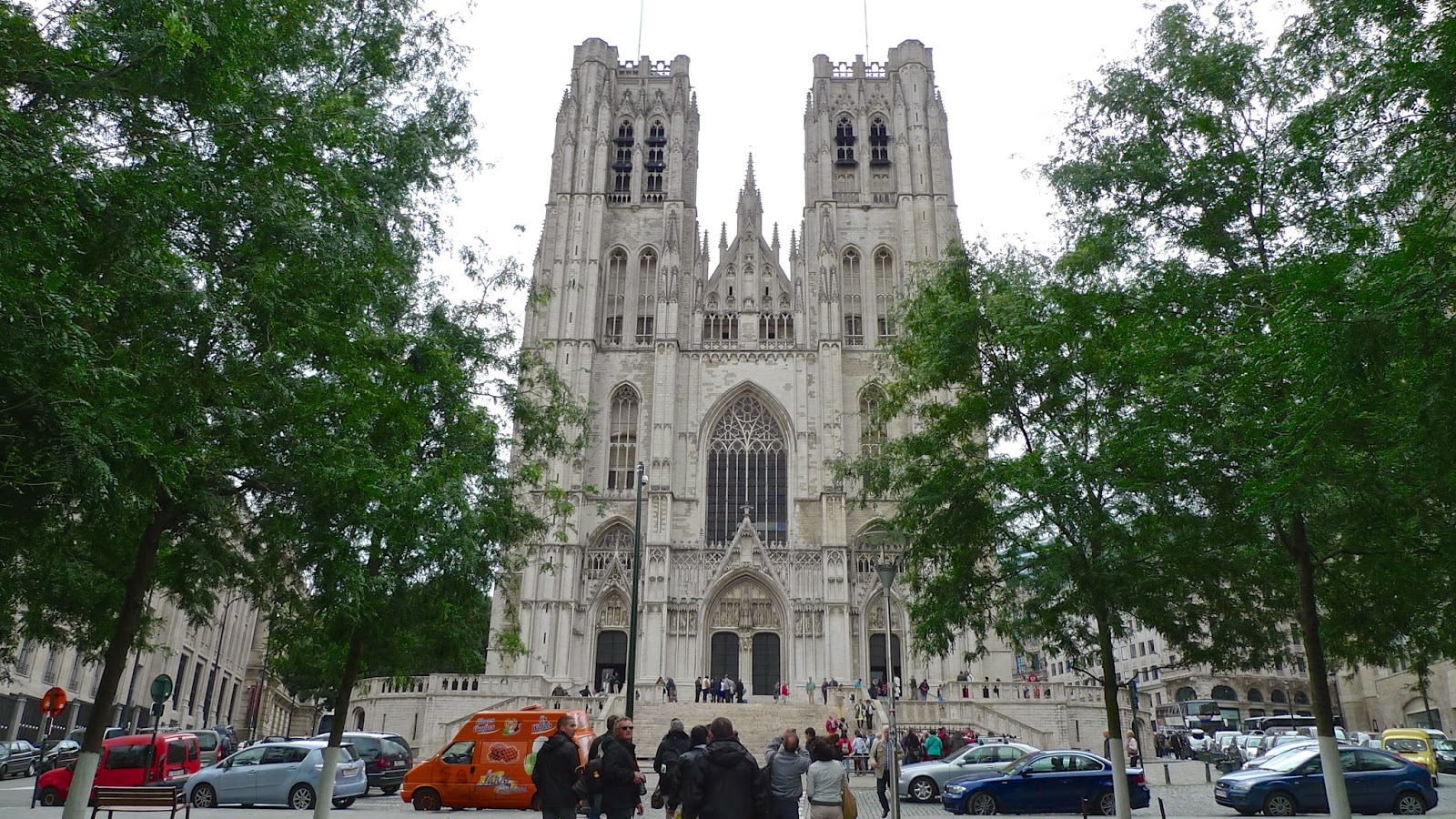 When in Brussels, there are other places to see. For us, an unplanned visit to the Cathedral of St. Michael and St. Gudula was most uplifting. 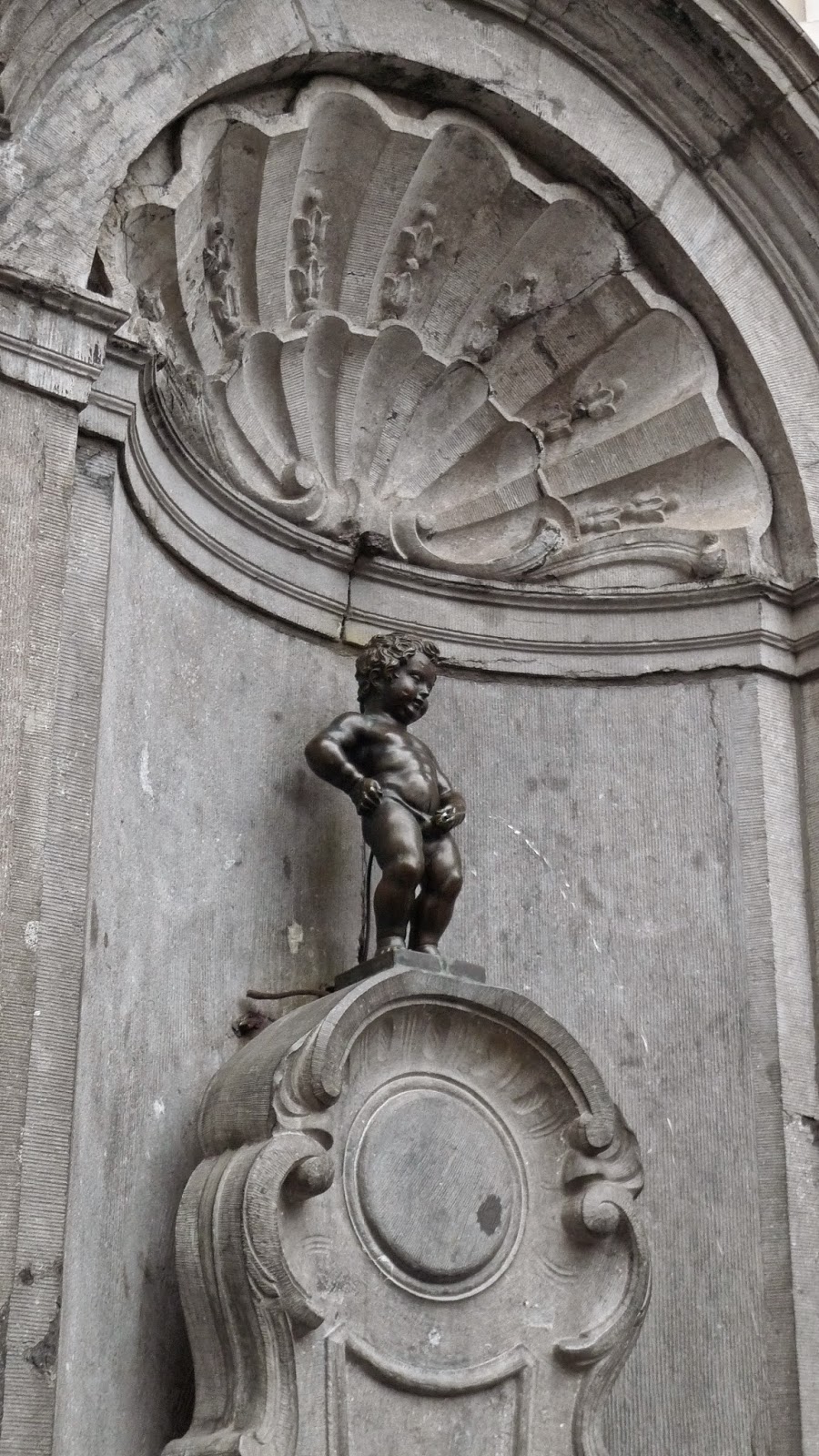 We were also in search of the famous Manneken Pis, the symbolic representation of the "rebellious spirit of the City of Brussels." This was first a fountain that was part of the distribution of potable water since the 15th century. It survived the bombardment of Brussels in 1696. Though it had lost its main role in the water network, it became a folkloric image among the citizens of Brussels - "the joy of the inhabitants and their capacity of self-mockery." At the Museum of the City of Brussels, part of his wardrobe that has been amassed through the years is on display. The latest count is he has over 900 suits. He is dressed lavishly during big events. But when we saw him, he was in his birthday suit. 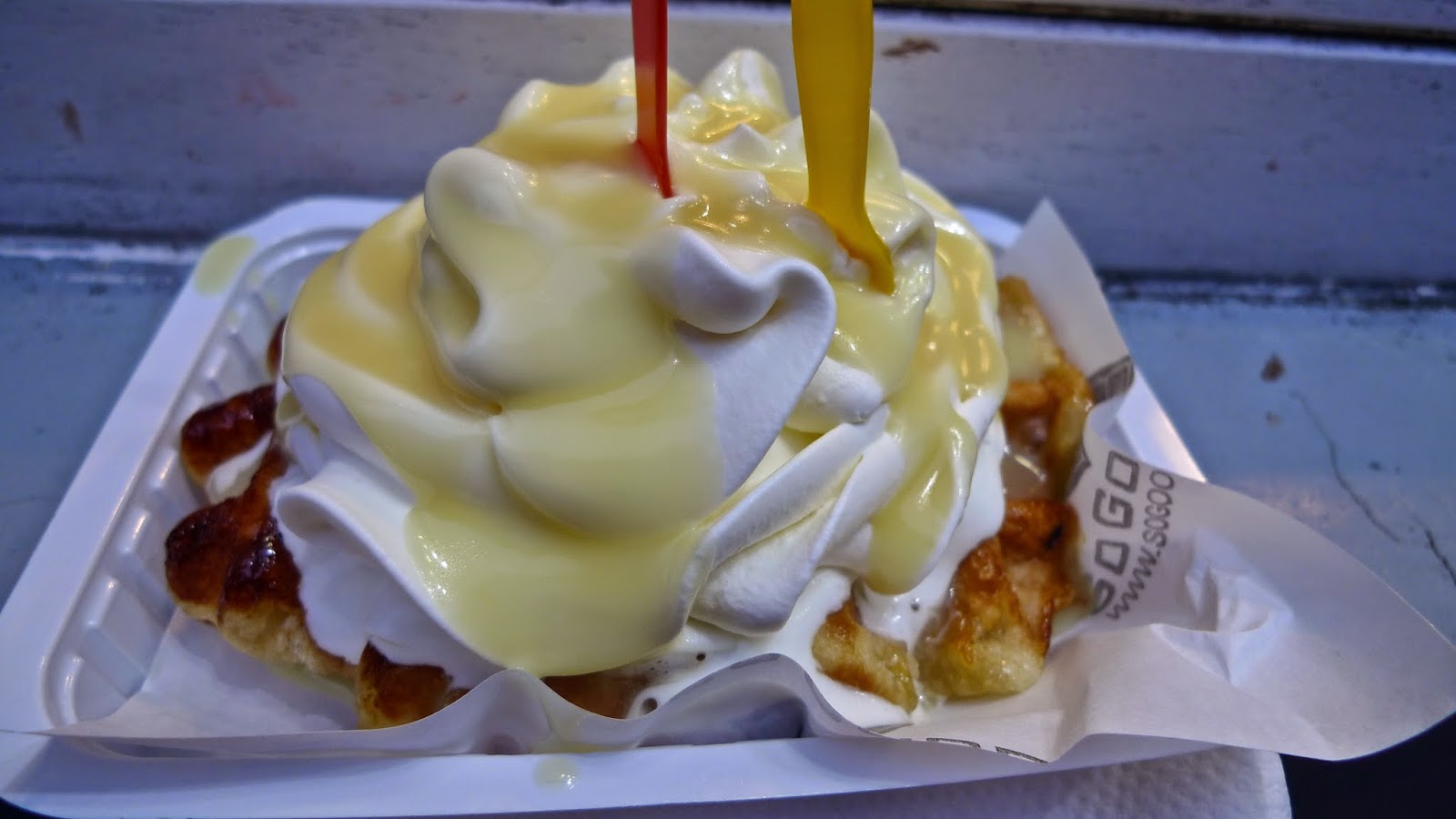 Who can resist the famous Belgian waffles? Not me!

There are two types of Belgian waffles - the Brussels waffle - more popularly known as the Belgian waffle, and the Liege waffle. It was the Liege waffle that was being prepared in the waffle places. It was a creation in the 18th century by the chef of the Prince-Bishop of Liege, the recipe of which he had adapted from the brioche bread dough. To the dough, pearl sugars are added that caramelized when being made in the waffle griddle, thus, making then denser in texture, sweeter in taste, and richer in calorie count!

As I indulged my epicurean desires to sample this, firstly, I had a waffle topped with strawberries and whipped cream as my dessert after our first meal in Brussels; next, was a waffle with banana slices, whipped cream, and Nutella as an afternoon snack; thirdly, I ordered a waffle with banana slices drizzled with Belgian dark chocolate after dinner; and lastly, I had my Liege waffle with whipped cream drizzled with white chocolate before I left Brussels the following day. Which turned out to be my favorite is hard to say. I loved them all! I have this recipe on standby now with plans to make Liege waffle soon.

For the flower enthusiasts, there are other flower exhibitions that are noteworthy. If you are interested, here's a calendar of when they are scheduled in different parts of the world.