The Holy Shroud of Turin, Cathedral of Turin, Torino, Italy

Turin is the cultural center in Northern Italy and is the capital city in the Piedmont region. It used to be a major political center when it became the first capital city in 1861, and was the home to the House of Savoy - the royal family of Italy. It lost its political significance after WWII, but remained as an important European crossroad for industry and trade.

Turin has become well known as the home of the Holy Shroud of Turin, as the capital of the alps, and the automobile capital of Italy. 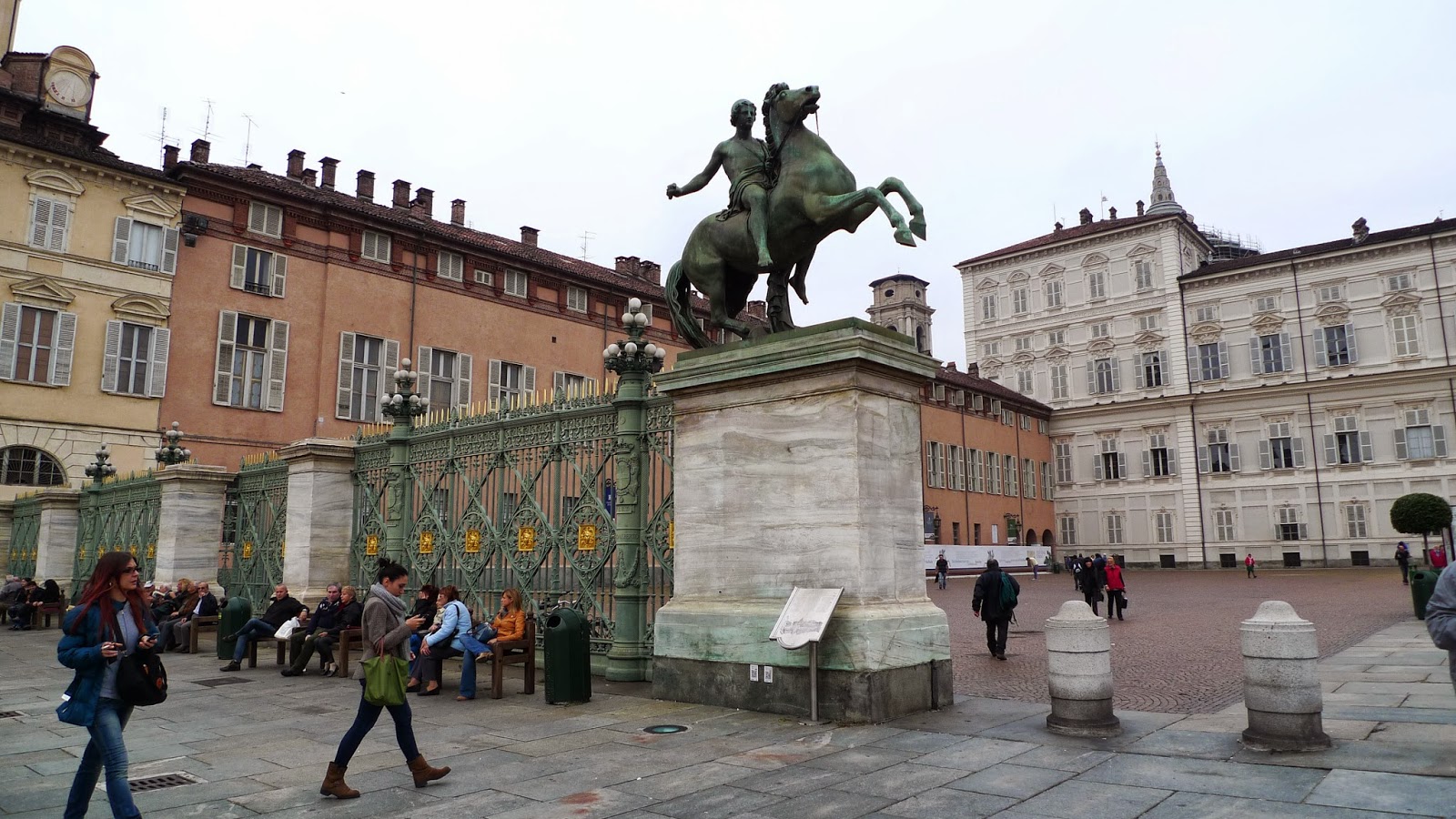 Center of town - Piazza Castelo and Palazzo Reale (white  structure - former Savoy royal house)
Behind the piazza is Duomo di Torino (The steeple of the Chapel of the Shroud of Turin is visible, behind the Palazzo Reale.)

The Duomo di Torino (Cathedral of Turin) - the main church in Turin, is much visited for it is the home of the Holy Shroud of Turin (Sacra Sindone di Torino). When the cathedral was built in 1491, it was dedicated to St. John the Baptist (San Giovanni Battista). It was completed in 1498, located next to an earlier campanille (c.1470), based on the design of Amedeo de Francisco di Settignano (aka Meo del Caprino), a Tuscan architect.

It was much later that the Chapel of the Holy Shroud was added, in 1668 -1694, by Guarino Guarini. He modified the original apse to connect it to the Palazzo Reale. 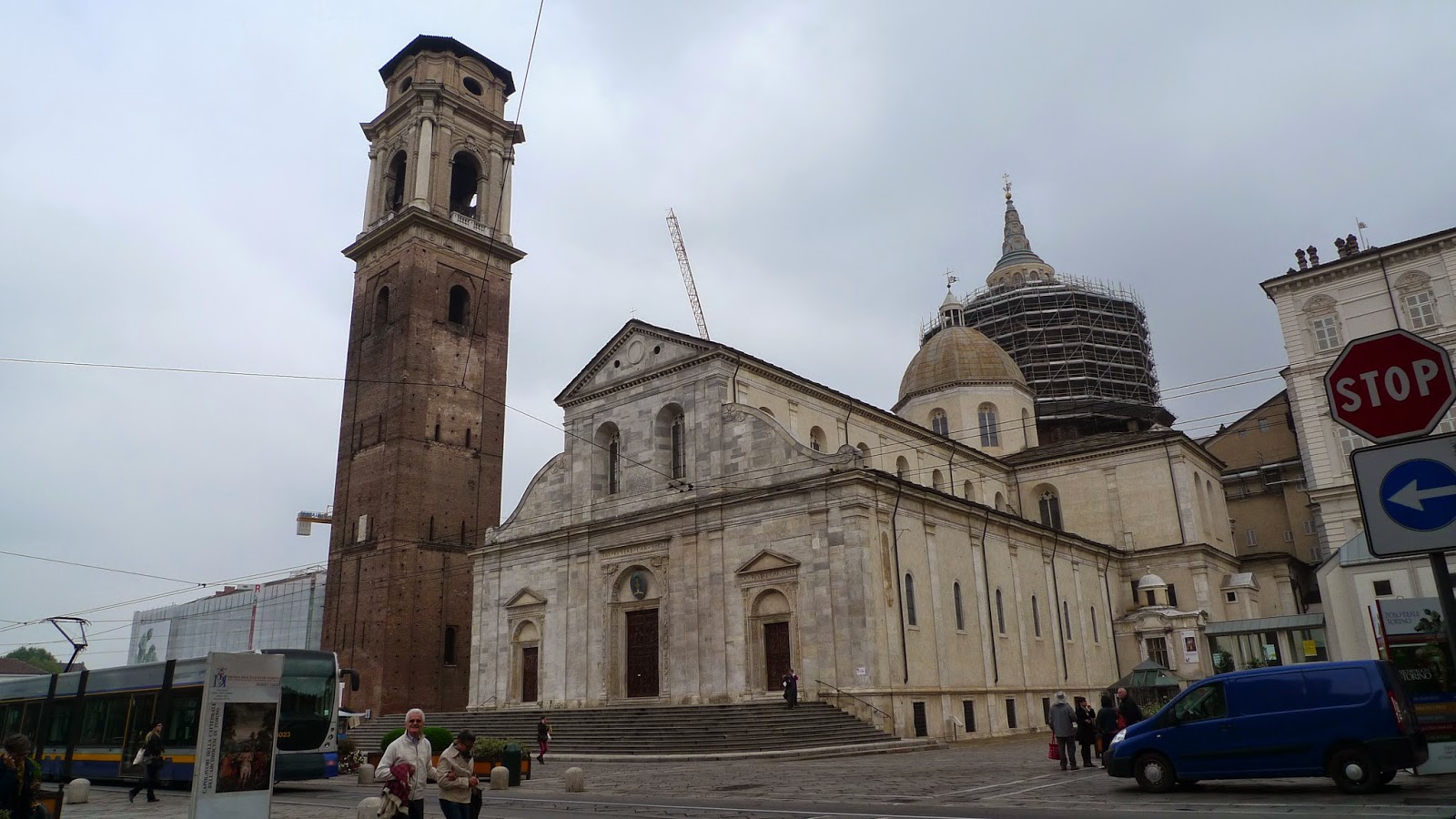 The campanille and the Cathedral of Turin
It is located at Piazza San Giovanni in Turin (Torino). 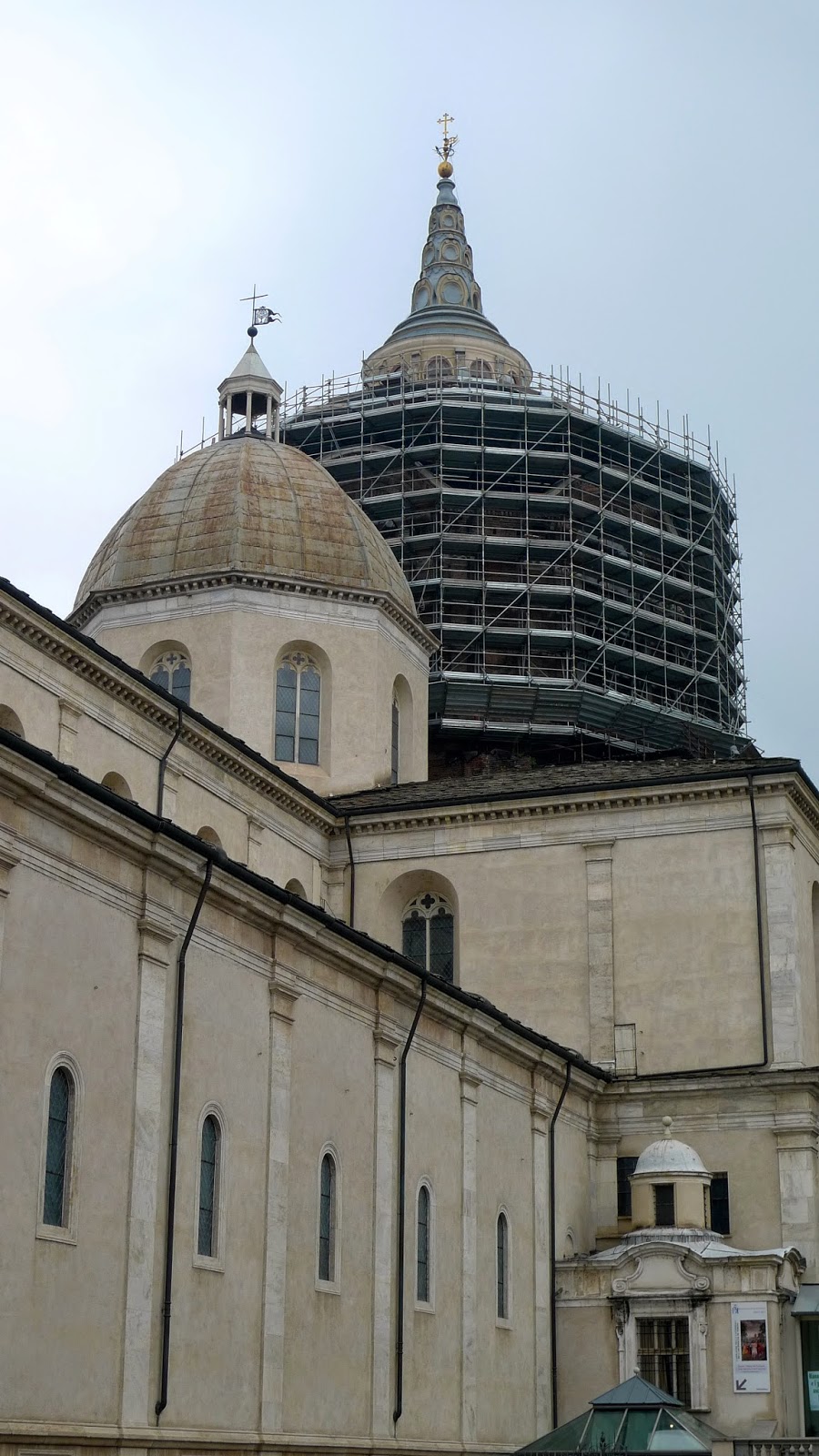 The dome of the Chapel of the Holy Shroud - behind the cathedral, is currently undergoing restoration.

This  church was erected on the site of three churches that were previously dedicated to the Saviour, St. Mary of Dompno, and St. John the Baptist, after their demolition in 1490-1492, upon the orders of Cardinal Dominico della Rovere.

From archaeological digs -  mosaic in the Church of the Saviour 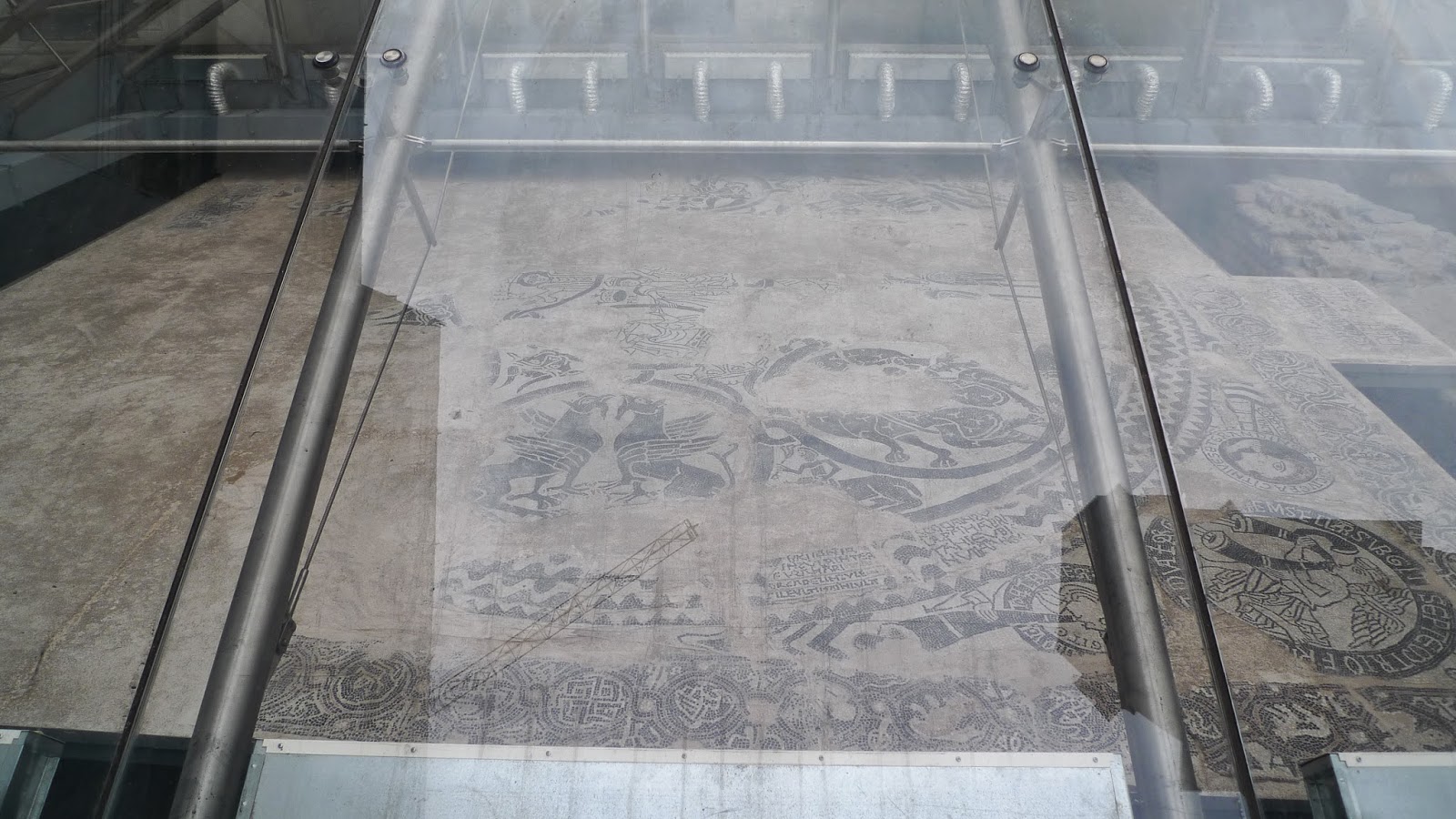 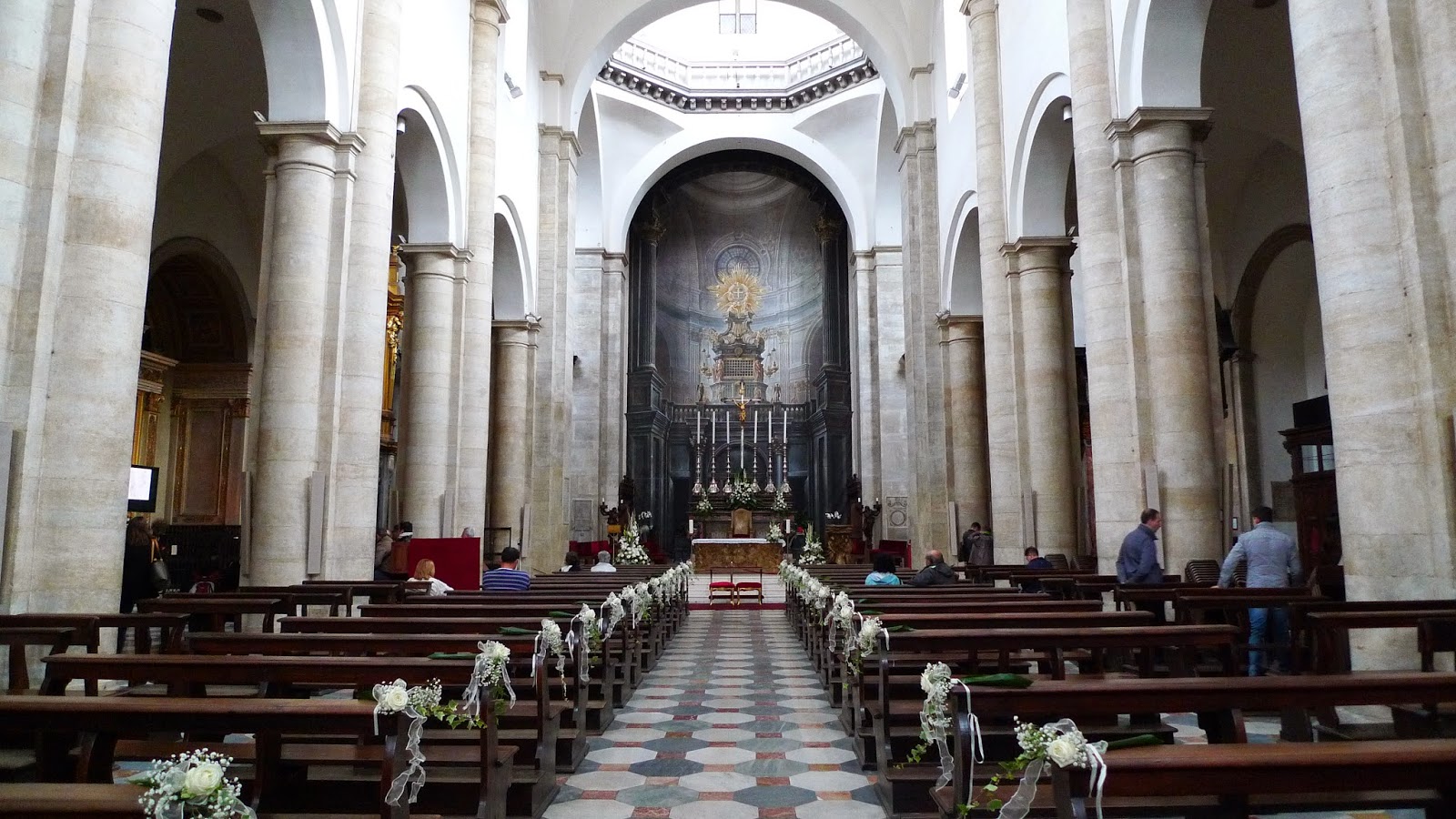 The central nave of the cathedral 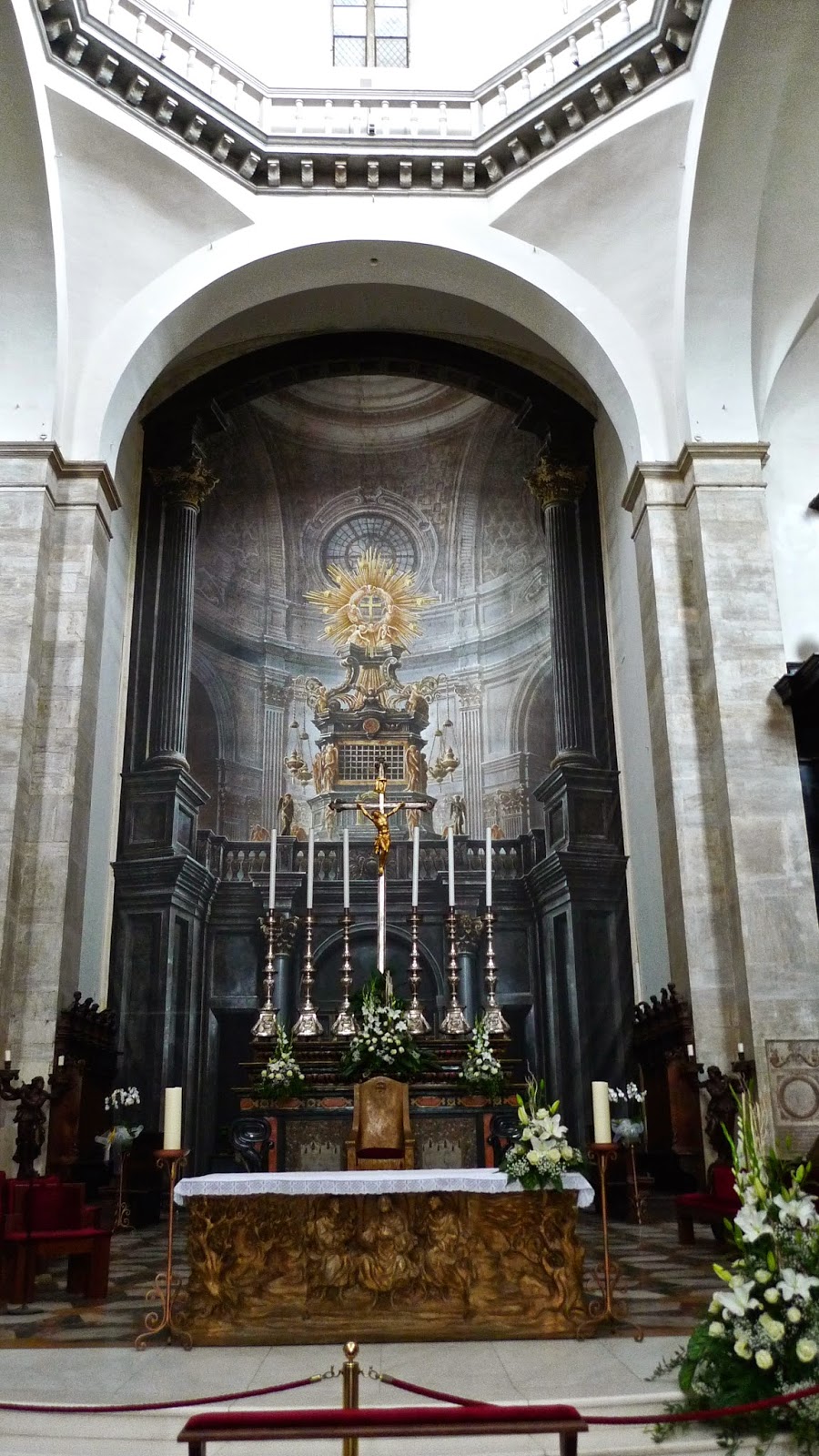 The panel painting behind the main altar, with the original design replicating the Chapel of the Holy Shroud (Cappela della Sacra Sindone) with the Altar of Bertola, was damaged during the fire in 1997. Work to restore it continues.

This is a late-19th century photograph of the
upper altar in the Chapel of the Holy Shroud. The cask of the shroud is inside the grilled metal reliquary, above the altar. A photograph of the Cupola della cappella della Sindone, nel duomo di Torino (Dome of the Chapel of the Holy Shroud, in the Turin Cathedral) - this part of the chapel took twenty eight years to complete.

Because of the ongoing work, there is no access to the original Chapel of the Holy Shroud. 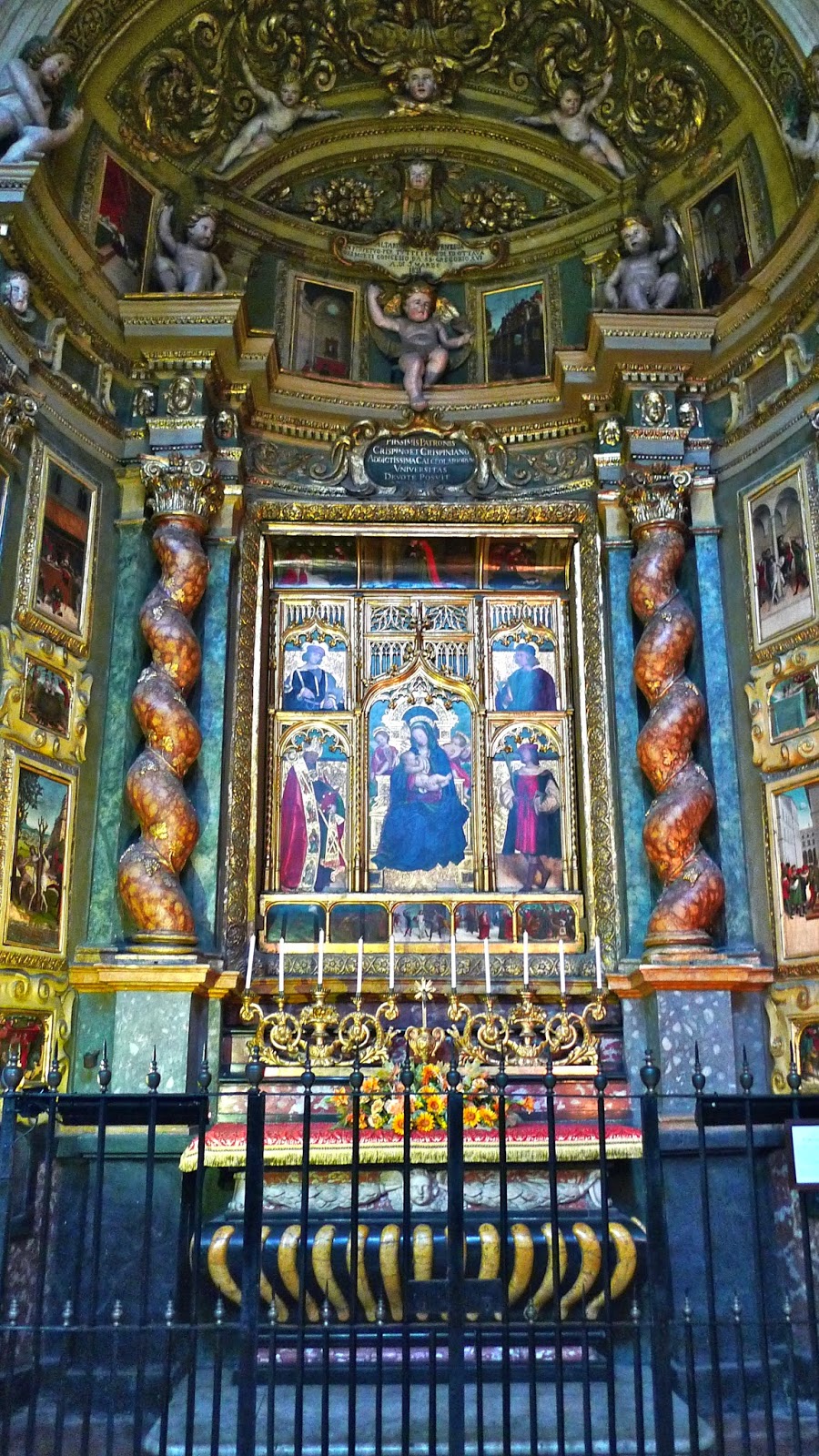 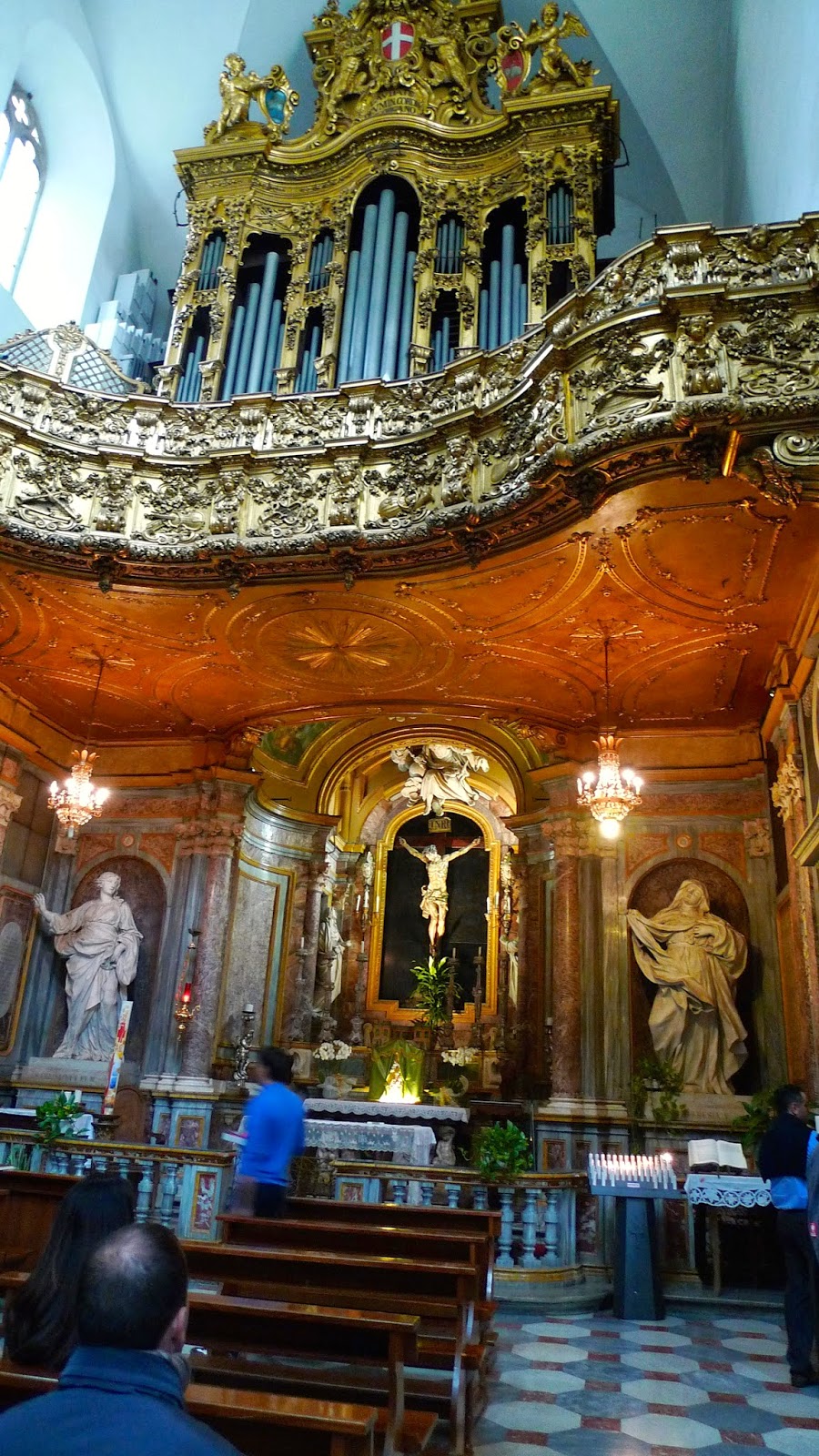 L'organo del Duomo di Torino
The organ of the Cathedral of Turin  is located in the right transept, on the opposite side of the chapel of the Holy Shroud. 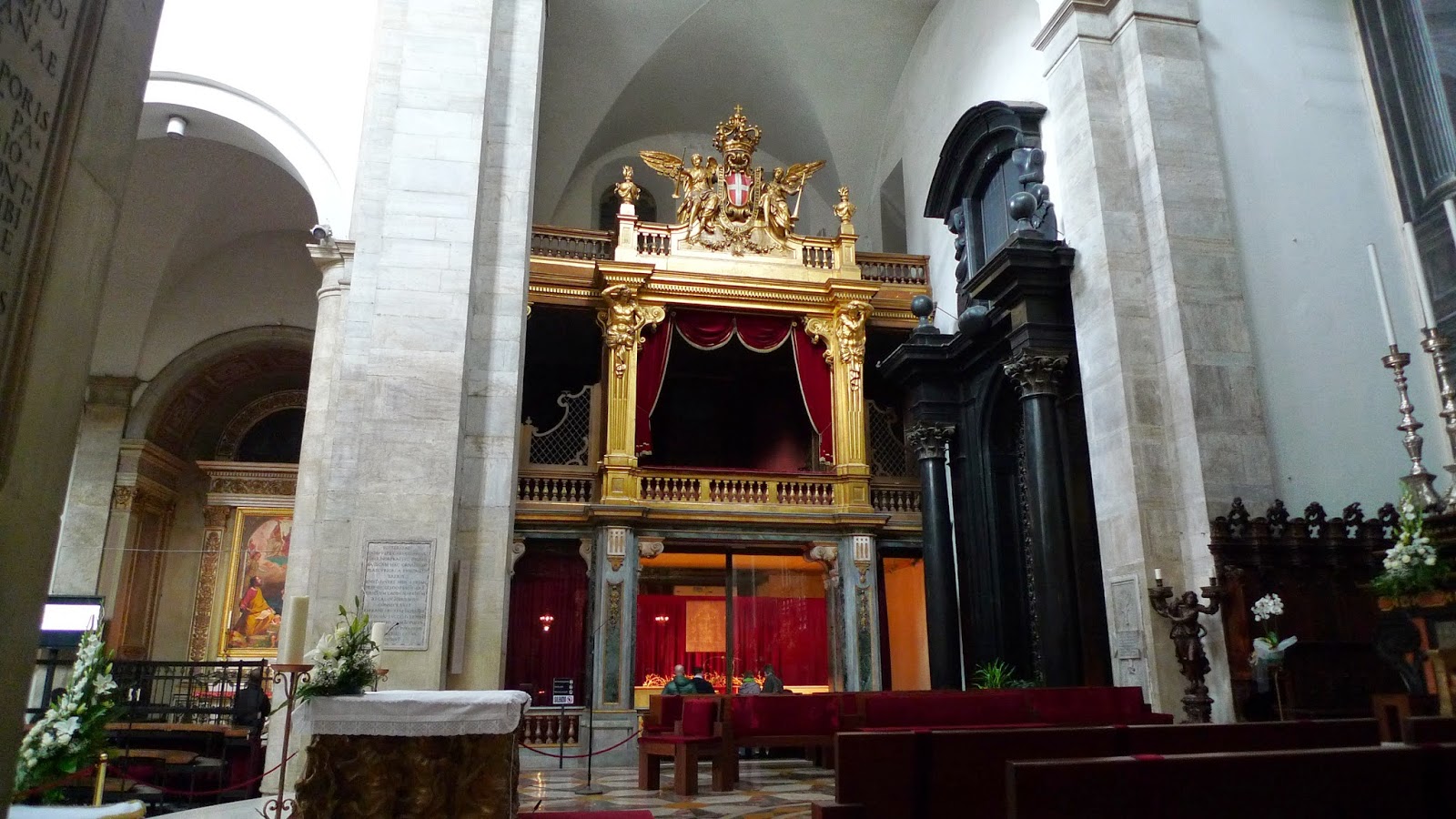 The Holy Shroud of Turin (Sacra Sindone di Torino)
A positive image of the face and body of a man - believed to be that of Jesus, has been formed on the lower half of the shroud.

The Shroud of Turin (Sindone di Torino) is a linen cloth that was used to wrap a man in preparation for burial, after his crucifixion. Much debate has gone on as to the identity of this man, the origin and date of the shroud.

The linen cloth, woven in a herringbone twill of flax fibrils,  measures approximately 4.4 X 1.1 meters (14.3 X 3.7 feet). It has  the faint, brownish markings of the front and back view of a naked man whose arms are crossed above the groin, aligned at the midline of the body, pointing in opposite directions. Also on the cloth are whole blood stains, detailing wounds that correlate to the pathophysiology of a crucifixion, and in this case, a crucifixion that is biblically described when Jesus went to his death on the cross.

A full-length photograph of the Holy Shroud of Turin


Thanks to the initial work of Secondo Pia, who was given permission to photograph the shroud on May 28, 1898, that the details of the shroud came to light. When he developed his pictures, he was astounded by the visible image of the negative plate which gave a positive image, in his darkroom. From then on, the scientific studies on the shroud commenced.


Historical records about the origin and whereabouts of the shroud only begin in 1390 in Lirey, France, when it was in the possession of French King Geoffroi de Charny. In 1453, it was deeded by Margaret de Charny to the House of Savoy. It was in 1578 that it was transferred to Turin. Starting from the 17th century, the shroud was displayed as the Holy Shroud of Turin in a chapel built by Guarino Guarini.

The shroud was damaged in a fire in 1532, in a chapel in Chambéry, the capital of the Savoy region, caused by a molten silver from the reliquary that housed it. The Poor Clare Nuns made attempts to repair it with patches. Numerous restorations attempts were made after this first attempt by the nuns, by Sebastian Valfre in 1694 and by Clothilde de Savoy in 1868.

In 1578, the Duke of Savoy - Emmanuel Philibert, ordered that the shroud be transferred to Turin, where it has remained up to the present time. It remained as a property of the House of Savoy until 1983, when it was given to the Holy See.

In another fire said to have been caused by arson, in 1997, the shroud suffered more damage. The Holy see had the shroud restored in 2002. At this time, the cloth backing and the 30 patches were removed. New scans of the images were made on the back-side of the cloth, revealing a faint part-image of the body of a man. 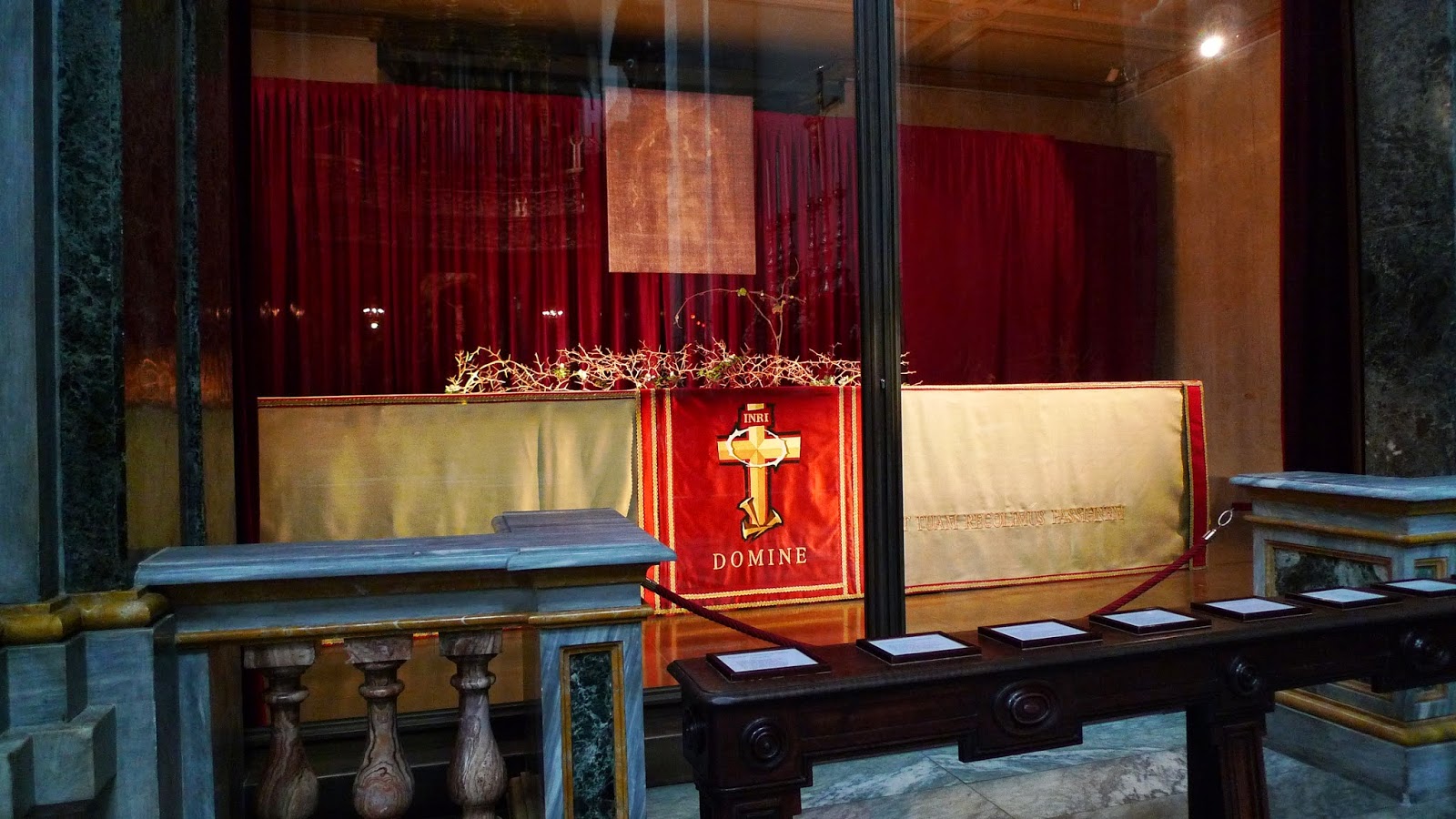 A place for churchgoers and pilgrims to pray before
the draped, protected cask of the Holy Shroud.

The connection between the Holy Face medal and the positive image of the man in the shroud, as photographed by Secondo Pia

Sister Maria Pierina de Micheli (1890-1945) reported a vision of Christ which she had on the first friday of Lent in 1936. She received a message from Jesus: "I will that My Face, which reflects the intimate pains of My Spirit, the sufferings and love of My Heart, be more honored. He who meditates upon, Me, consoles Me."

The first medal of the Holy Face was given to Pope Pius XII, who also declared, in 1958,  the feast day of the Holy Face of Jesus as Shrove Tuesday (the Tuesday before Ash Wednesday), to be preceded by a nine-day novena. The Holy Face medal was worn by many as protection during World War II. 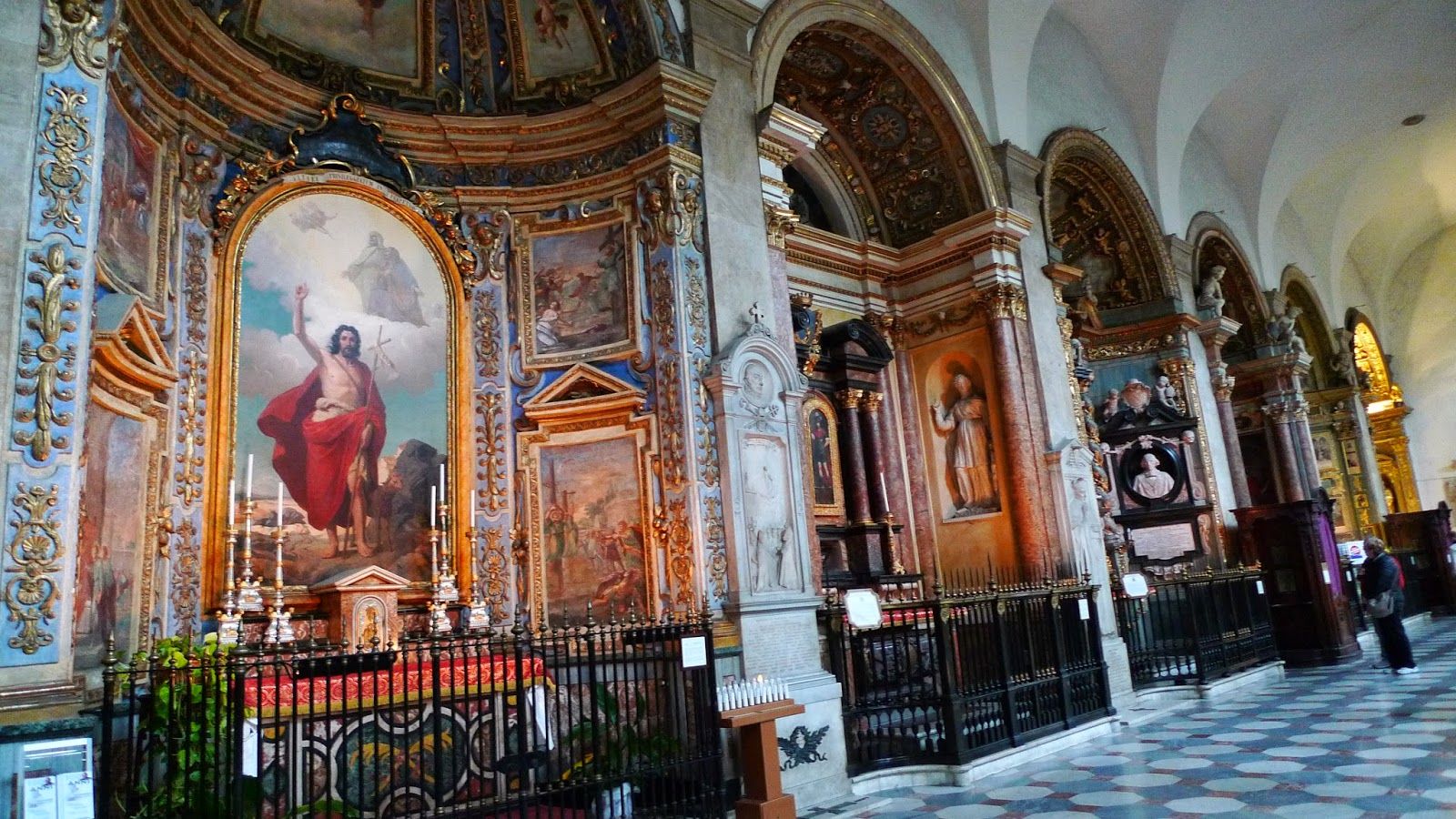 The other side chapels after the Chapel of the Holy Shroud

The Catholic Church has neither formally endorsed the authenticity nor rejected the veracity of the shroud. As this is a relic, authentication is left to scientific investigation.

Pope John Paul II was said to have been so moved by the image of the man in the shroud, that he arranged for the public showing in 1998 - on the occasion of the 100th year of Secondo Pia's photograph of May 28, 1898. In his address on May 24, 1898, the pope stated "The Shroud is an image of God's love as well as of human sin...The imprint left by the tortured body of the Crucified One, which attests to the tremendous human capacity for causing pain and death to one's fellow man, stands as an icon of the suffering of the innocent in every age."

In the year 2,000. Cardinal Ratzinger, who later became Pope Benedict XVI, wrote that the Shroud of Turin " is a truly mysterious image, which no human artistry was capable of producing. In some inexplicable way, it appeared imprinted upon cloth and believed to show the true face of Christ, the crucified and risen Lord." In his visit to the Cathdral of Turin on May 2, 2010 ( a Sunday) he expressed his sentiments, once again, about the shroud: "extraordinary Icon", the "Icon of Holy Saturday...corresponding in every way to what the Gospels tell us of Jesus"; "an Icon written in blood, the blood of a man who was scourged, crowned with thorns, crucified and whose right side was pierced"; "we see, as in a mirror, our suffering in the suffering of Christ."


During the exposition of the Holy Shroud of Turin, on Easter - May 30, 2013, at the cathedral, Pope Francis sent a video message in which he said "this icon of a man...the Man of the Shroud invites us to contemplate Jesus of Nazareth"; "The face in the Shroud reveals a restrained but powerful energy, within it shines through, as if to say: have faith, do not lose hope; the power of the love of God, the power of the Risen One overcomes all things”.


Plans are underway to have another exposition of the Holy Shroud of Turin in 2015. It is to coincide with the bicentenary celebration of the birth of St. John Bosco, whose ministry was centered on caring for and teaching young people. The exposition will be held from the Easter season in April 2015 to August 16, 2015. We are all invited to come.


Whether the shroud is authentic or not has no bearing on the validity of Jesus' teachings on the "saving power of his death and resurrection." It is left to the individual to make a personal decision about it's authenticity while continuing research and analysis is going on, in his practice of his faith.


May the blessings of Easter give us new life and renewed hope. A blessed and happy Easter to all!