The Harvest Festival on Avenue Montainge 2013

In France, the harvest festival coincides with the grape harvest in the fall, anytime from September to November, in different regions. Known as "La Fete de Vendange." just about every city has a date set for their celebration. "Vendange" means grape harvest. And from this, what is celebrated are the wine and bubbly products that become part of our daily lives, our celebrations.


In the fashion district on Avenue Montaigne, the vendange festival was set for September 12, 2013. Featured and served in this festival, as you can probably imagine, were the big names in wine and champagne. This event is by invitation only - for clients, fashion editors and writers, and other VIP guests.


All week, construction crews worked to build structures along Avenue Montaigne and François 1er. The more elaborate ones were on the intersection of these two streets. During my afternoon stroll on the day of, I spotted some last minute details being put in. 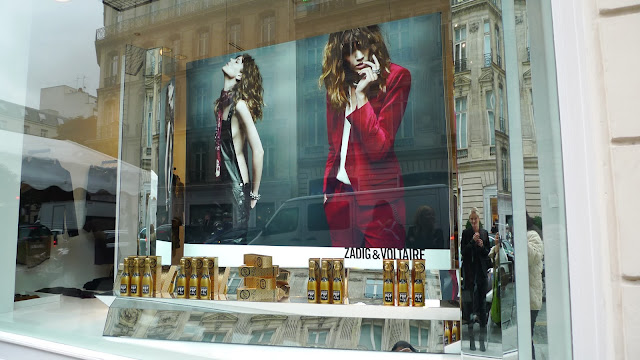 At Zadig and Voltaire, the bottled spirits were made part of their window display. 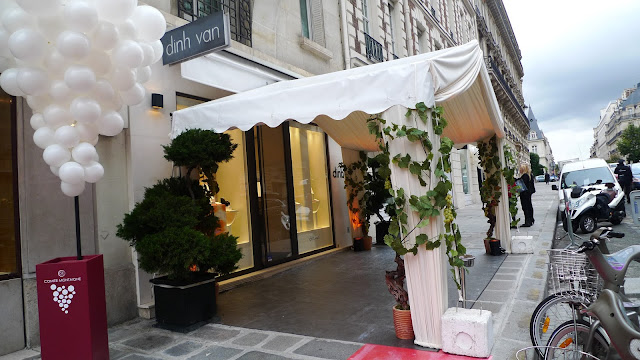 Dinh Van ( a jewelry shop) had grape vines on the tent set-up they situated by the entrance to their store. 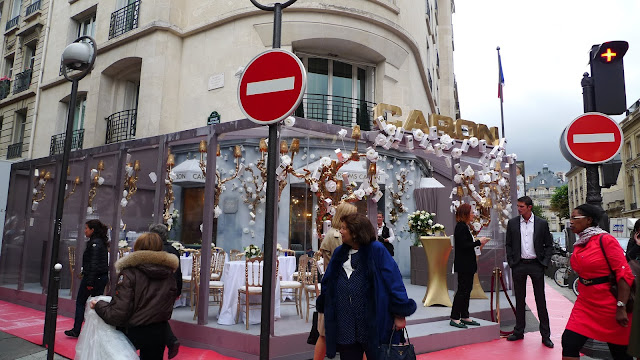 Caron (perfumes) had a plastic-covered area that took up a big chunk of the corner sidewalk. Elegant table settings were in place in a more classic style, with golden wall candelabras, enlivened by silk roses. 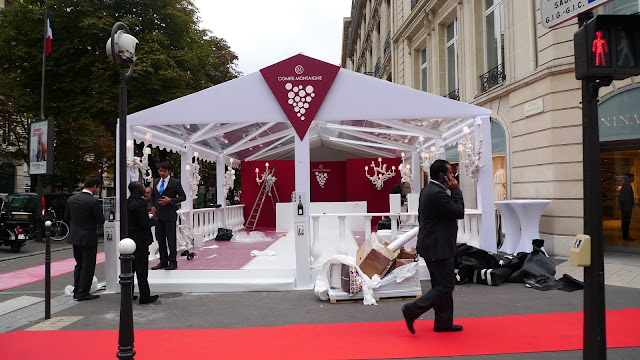 Diagonally across from Caron was Nina Ricci, where the workers were aiming for an up-to-the-last-minute schedule to get the set-up completed. 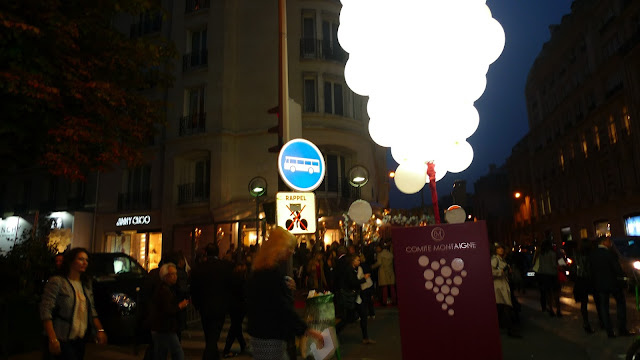 By nightfall, the grape-shaped lighting street lamps were aglow.

I went out to dinner with some friends and part of our plan was to see how the harvest festival was coming along, right after. 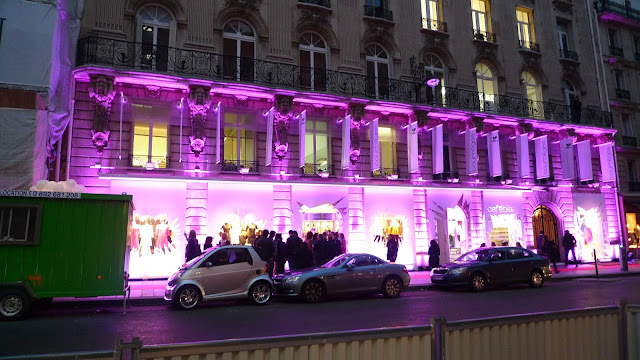 The store that stood out on François 1er was Courreges. It was brightly lit up in a pinkish shade. Their guests were both entertained and served indoor and outdoor. 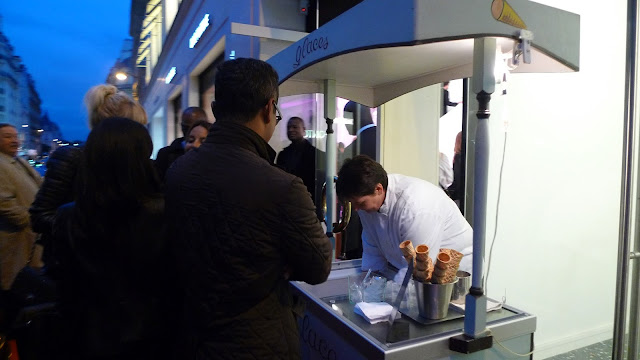 Anne Fontaine had an ice-icream cart, aside from the wine and bubblies being served, that was popular with their guests, inspite of the chilly weather. 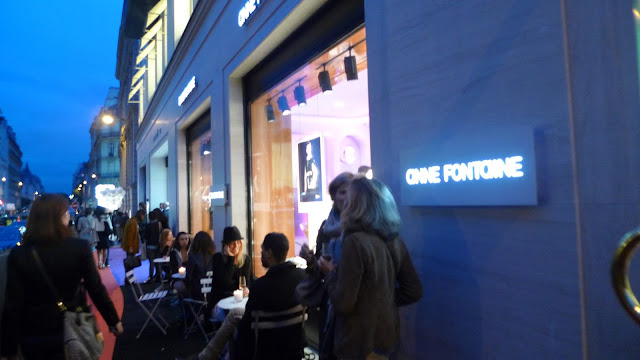 They had a sidewalk-cafe set-up just for this evening's celebration... 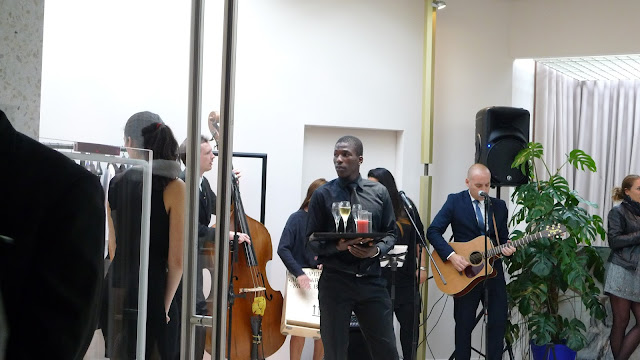 ...with music that filled the air from a live band. 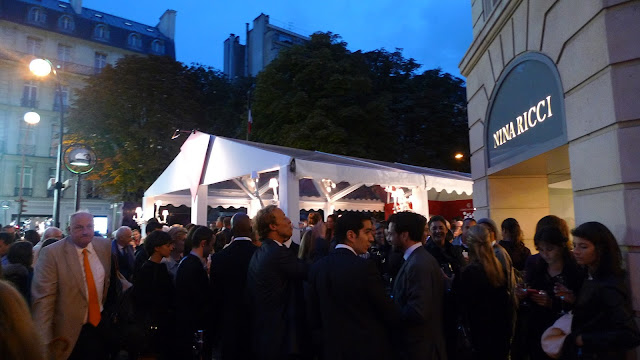 The Nina Ricci corner was overflowing with people.

Lots and lots of French wine and champagne were being consumed, overall, in a festival like this. 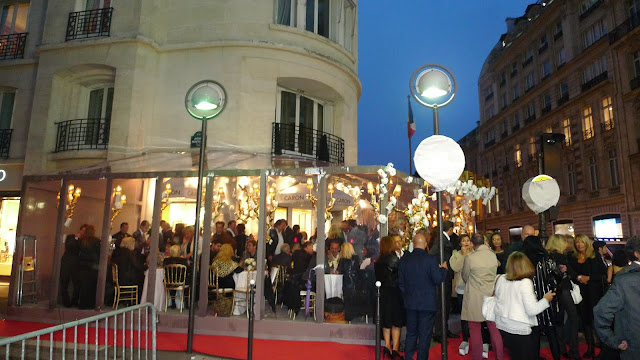 Just as the wine flowed from Caron, so did the people - into what was left of the sidewalk... 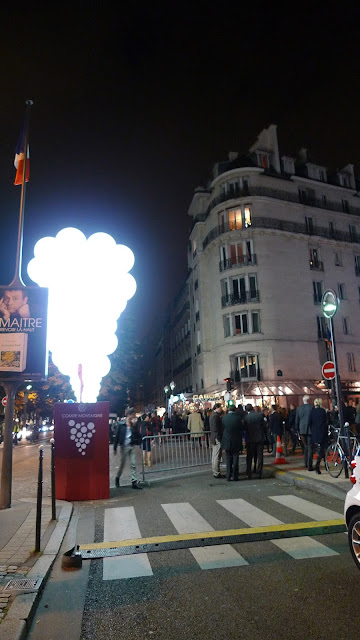 and the street, with drink in hand. 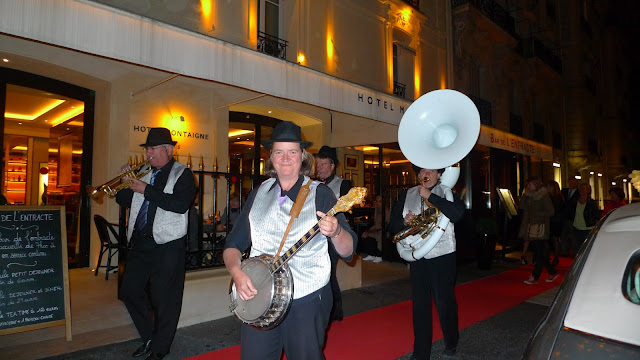 Part of the entertainment along Avenue Montaigne was a quartet. They played New Orleans jazz. That was lovely!
And there was disco/techno music playing at the Louie Vuitton shop. 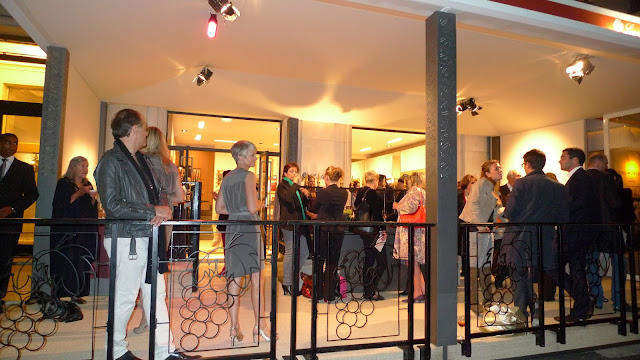 Loro Piano cordoned off a platformed sidewalk with a grape cluster motif. 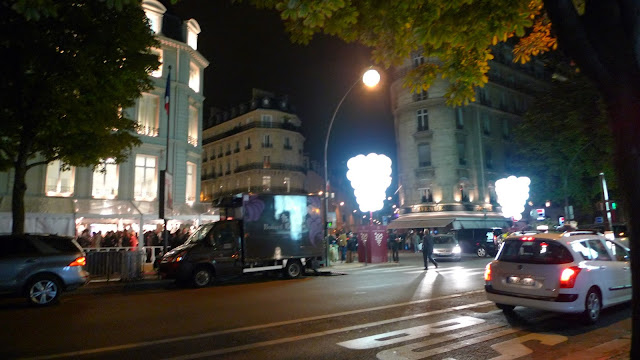 Traffic officers kept the traffic at the intersection less chaotic and flowing. 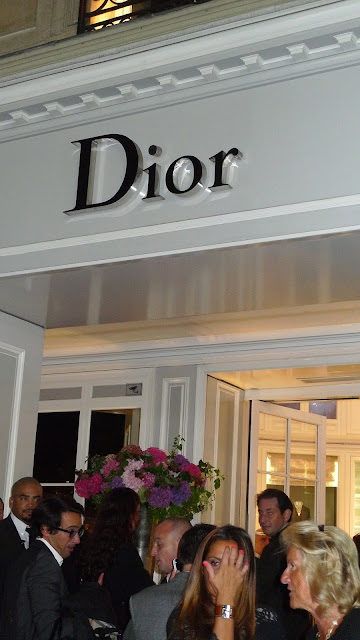 The touch-of-class award (from me) went to Dior! They had no elaborate structures - just two giant, beautiful, flower arrangements at their main door entrance. 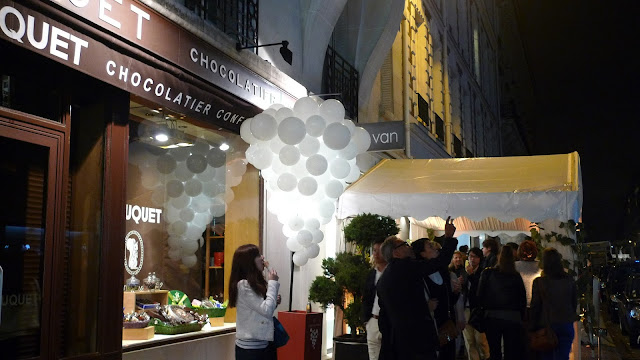 The party was winding down by 10:30, for after all, tomorrow is a work day.

Once again, this was a time when the red carpet was rolled out on the fashion strip, as grape clusters came alive, with people celebrating the good vintages brought out by the different fashion houses, while the looky-loos - like my friends and me, peeked and enjoyed the music, the animations, and the festive moment.

Until next year, may we always be blest with good spirits!
Posted by yolanda at 15:35