The summer season is set on our calendars on June 21st, and the summer solstice can occur anywhere from the 20th to the 22nd of June. This year, our change in season to summer began with the longest day of the year known as the summer solstice, this June 21st. This happens according to " how the earth's north-south axis are being tilted 23.4 degrees relative to the ecliptic, the plane of the solar system." Interestingly, while we experience the summer solstice with the North Pole tipping more toward the sun, the Southern Hemisphere has the shortest day which is called the winter solstice. The reverse will happen on December 21, 2013.

This day has been celebrated by many cultures all over the world. The summer solstice is also referred to as midsummer.

In the ancient days, close attention was paid to the "natural alignments". To these, some "mysticism and supernatural significance" were attached. The summer solstice was associated to one's wellbeing. Specially In agriculture, it was relevant to the growing and  harvest seasons."Paying attention to the solstices was a way of teaching mathematics, celestial mechanics, astronomy, culture, and history."

The more famous solstice celebrations - summer and winter,  have been held in Stonehedge in the United Kingdom, for about 5,000 years.

Now a days, the nature of the celebrations have changed. For the most part, we are now less of an agricultural world. Most of us live in an in-door culture - we work indoors, we play, eat, and do some, if not most, activities indoors. So, this day has given us another excuse to go out, have a good time, and party, except for the neo-pagans who still perform their rituals.

In Paris, the 32nd Fete de la Musique was celebrated on the streets. Professional and amateur performers came out, looked for a corner, a sidewalk, or any space they could find to set up and perform, much to the delight of the music lovers who crowded around them.

I decided to take part and planned to go to the Latin Quartier and St. Germain des Pres to get a piece of the action. Boy, was it crowded. It was not just the summer solstice, but it was also a Friday evening! I joined the international crowd to celebrate this day. 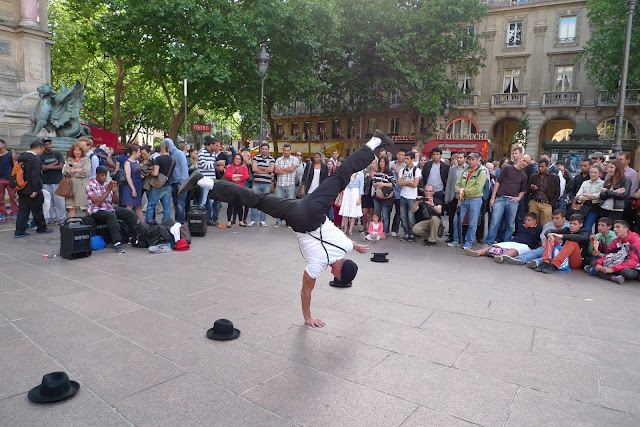 I headed to Place St. Michel (near the Notre Dame) and watched the opening performance of this hip-hop dancer, where he actually mimed-danced to the music. Unfortunately, he had competition from the loud noise being made by a marching band. 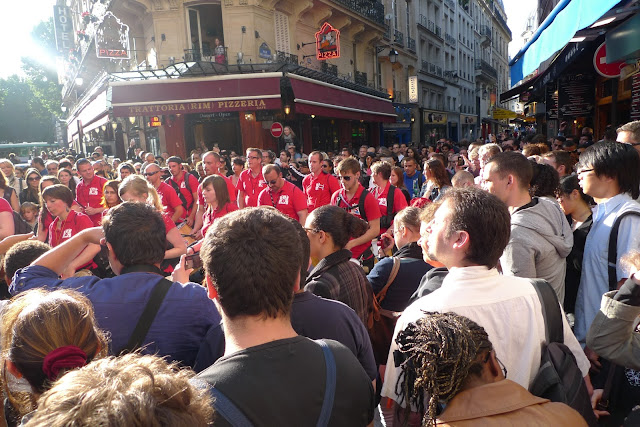 I caught up with the marching band on their way to the Latin Quarter. Their sounds were coming from percussion instruments - drums of different types. They played pulsating rhythms. I would have loved to dance, but no one else was. 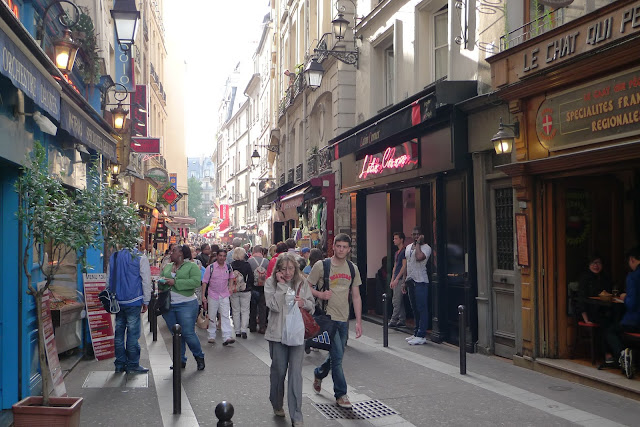 All sorts of sounds and music were drifting in the air. 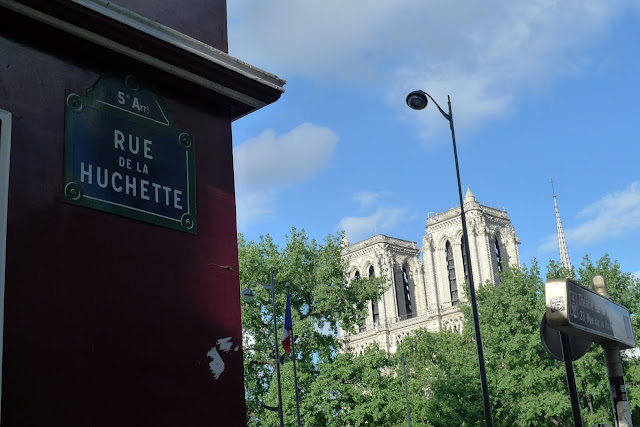 I meandered through the street and... 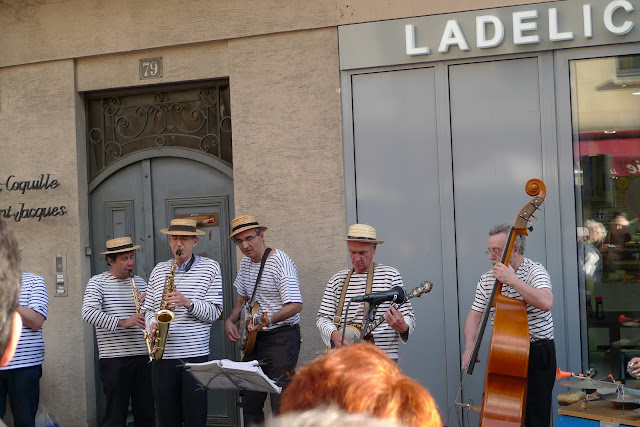 found this group doing New Orleans blues/jazz. It brought back memories of my visit to the French quarter in New Orleans. 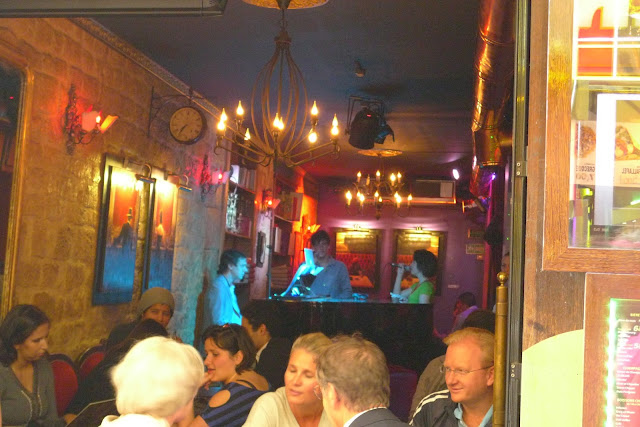 Piano bars were full, too. 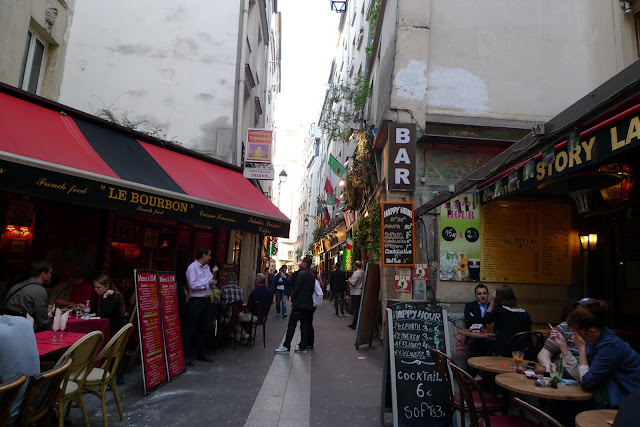 Restaurants lined both sides of the narrow streets - I almost stopped to have a gyro sandwich at a Greek restaurant. I was getting hungry with all the aromatic flavors permeating the air. 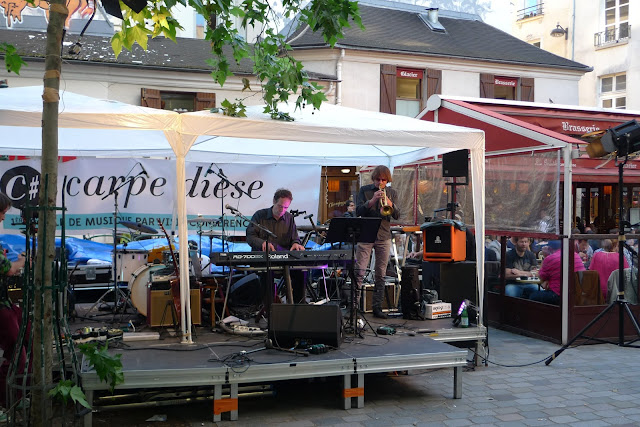 As I decided to head to the St. Germain des Pres area, I stopped to listen to iconic tunes performed in the style of smooth jazz. This group came from Carpe Diese - a school of music. Old romantic, sometimes classical songs were featured in their repertoire. 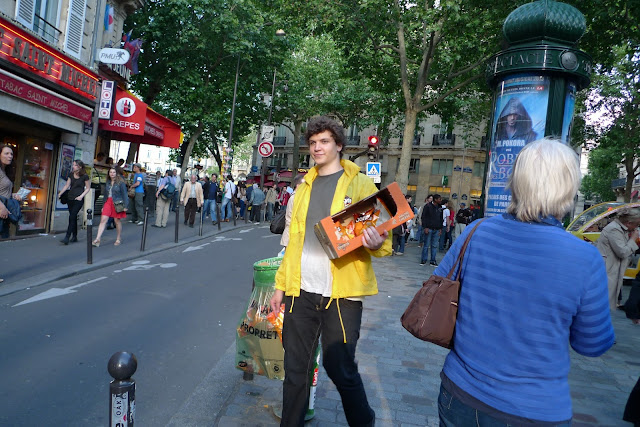 This man was giving away bags of Doritos. I tried so hard to stick to my diet and I managed to say "No, merci." I was craving for something more healthy. I was on my way to rue de Buci. 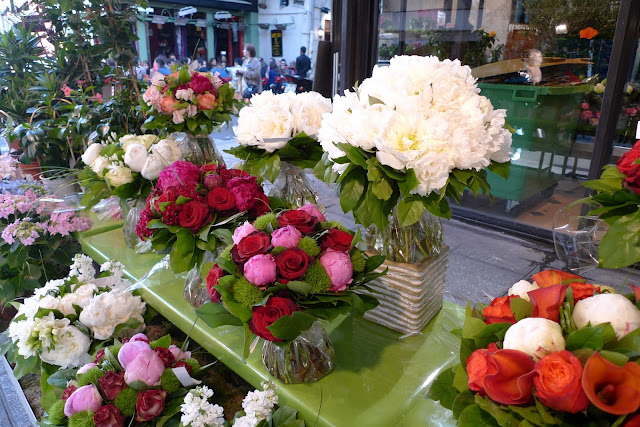 My first stop here was at a flower shop - it's the season for peonies. So pretty! 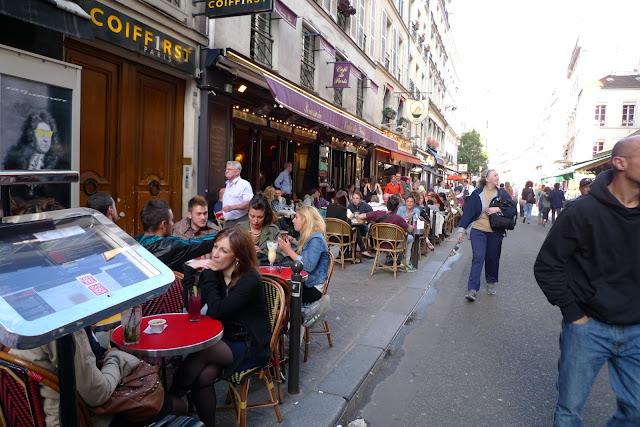 I noticed that outdoor seating was full - as expected, as these are the premier, choiced seats among the diners during the summer, or as soon as the sun comes out. 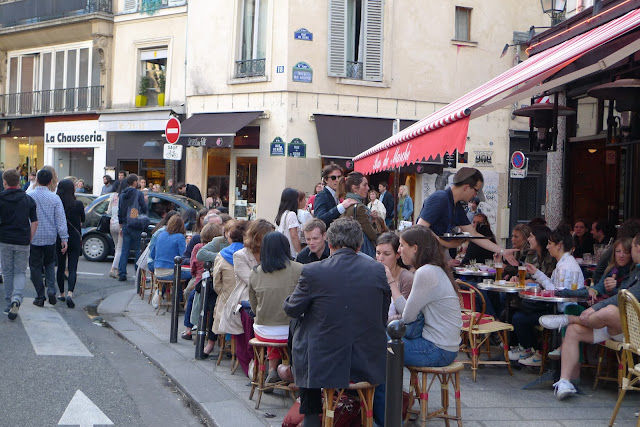 I found this place that was recommended by a friend - Pastavino, on 18 rue de Buci. I was ready for a quick bite. 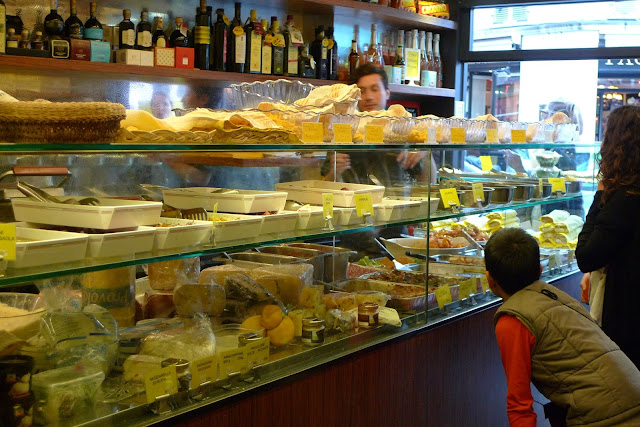 It's an Italian deli with an almost hidden restaurant on the second floor. 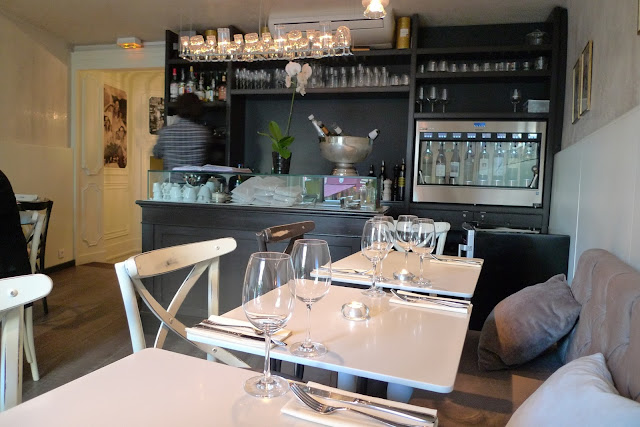 Ten tables set, with a maximum capacity of 22. I decided to sit near the window. I noticed the lighting fixture above the bar, and I found it interesting. 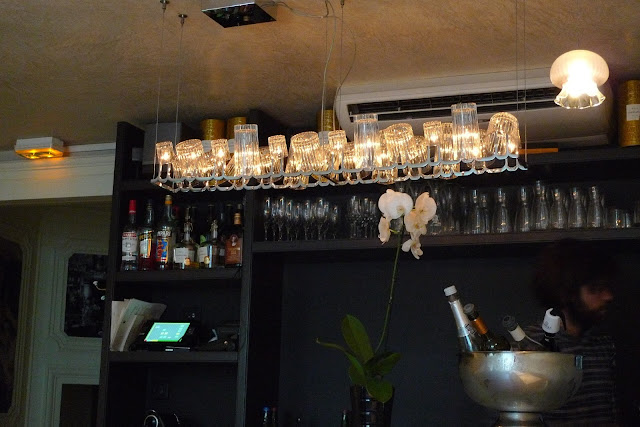 The light bulbs were diffused with different sized, ribbed glasses. How clever that was! 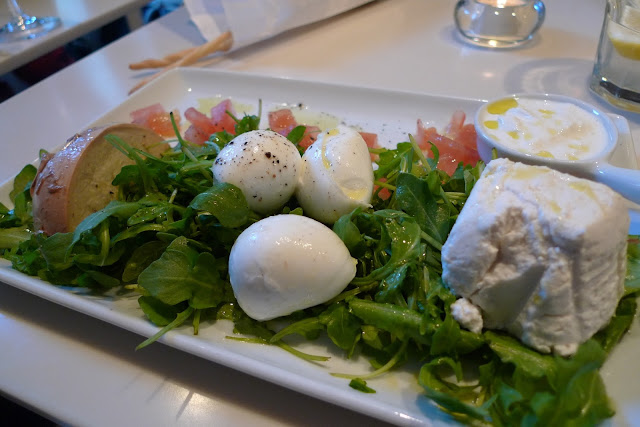 I ordered Freschissima - a plate of affumata, mozzarella, ricotta di buffala, and stracciatella on a bed of arugula and tomato salad. Paired with bread sticks and bread slices, this was so delicious and quite filling. By the time I finished my food, this place was full. Back to the streets I went. 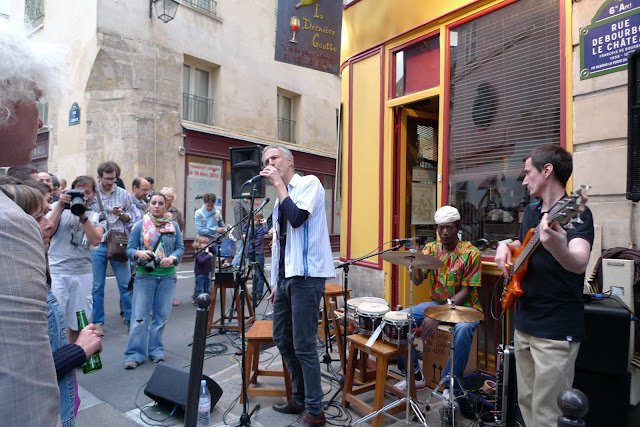 This rock band had a quaint sound - they were singing in English with a French accent. 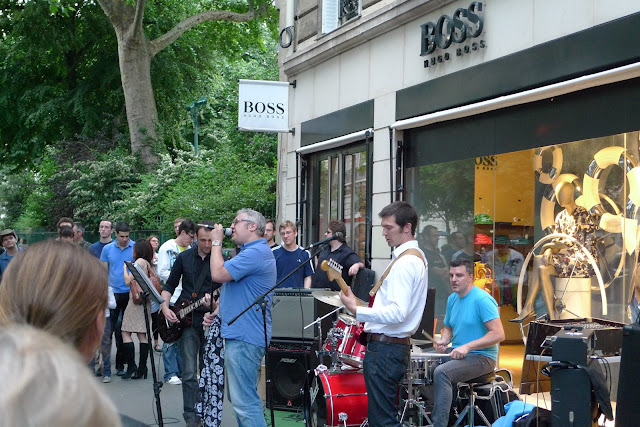 A French, rock band - they were singing in French!

After two hours of being out, I thought it best to get home. 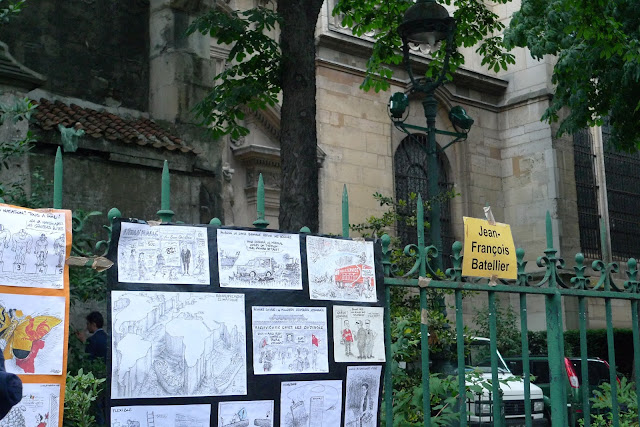 Here was my last stop before entering the metro station - by Jean Francois Batelier's artworks. His posters had stories or messages, including political satire.

The metros were terribly full. I managed to squeeze in.

It was a fun early evening outing. I found myself in a music festival that was free, entertaining, and showcasing some good music. What I missed the most was Brazilian music - bossa nova and samba.

La Fete de la Musique was the brainchild of Maurice Fleuret. He was a French composer, music journalist, radio producer, arts administrator, and festival organizer. He became a director of music and dance in the Ministry of Culture headed by Jack Lang,  under the socialist regime of Francois Miterrand. Upon the request of Jack Lang and a study he found about the cultural habits of the French - that one out of two children played a musical instrument, he conceived of an idea of how to bring people out in the streets. Thus was born this musical festival, the day of summer solstice on June 21, 1982.

The festival was a spontaneous event that turned out to be very successful. It became the occasion for all types of musicians - professionals and amateurs alike, to perform any kind of music - from traditional, classic, to rock, jazz, and the latest musical trends. With the help of media, municipalities, and institutions, and the participation of musicians, this music festival has become one, major French cultural event, every year.

This music-festival model has been adopted in other countries in Europe, Africa, Brazil and Columbia in South America, in San Francisco and New York, and even in Manila, though, not necessarily happening on June 21st. 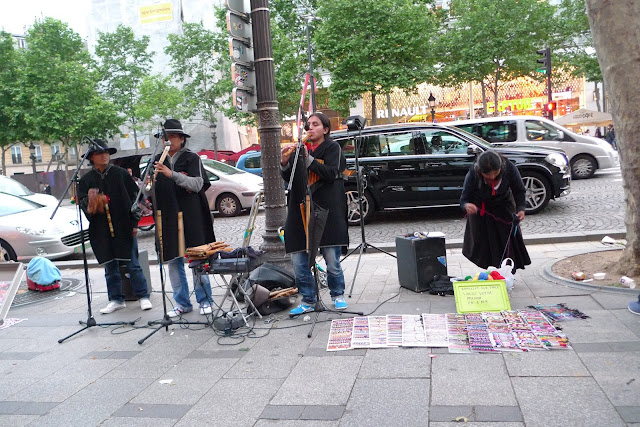 On my metro exit at the Champs-Elysees, I found this band of musicians from the Andes. They played their ethnic songs, sounding like the Gypsy Kings.

Oh, life in the streets of France can be so entertaining.
Posted by yolanda at 16:53