The 850th Anniversary Celebration of the Notre Dame de Paris

This fall season in Paris has had a pattern of almost daily rainfall. Wanting to get a breath of fresh air, I got going at 8:00 a.m., all bundled up for the 4°C temperature, to soak up the beauty of this place. My destination was the Cathedrale de Notre Dame de Paris, on foot.

Going to the Notre Dame is always a thrill for me. There is so much history connected to it, with some interesting, anecdotal  records. 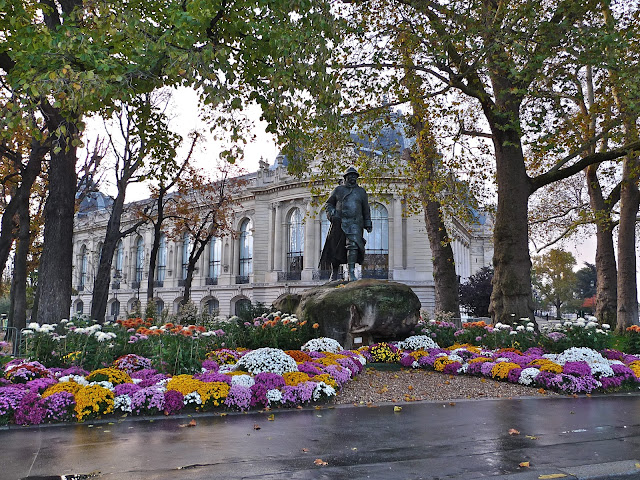 Passing by the Petite Palais 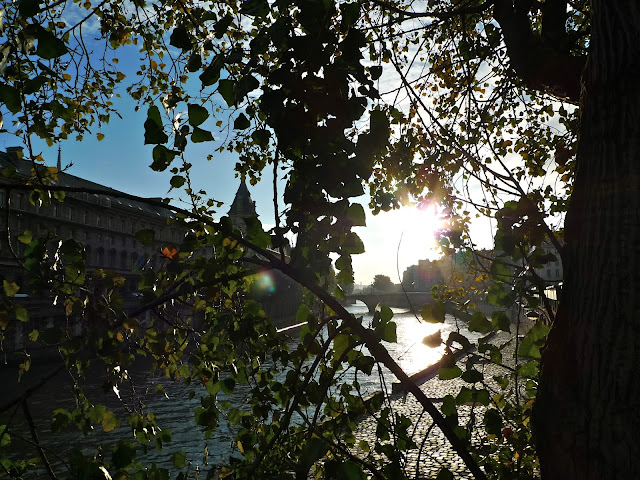 Walking along the Seine River

To my delight, the sun began to break through the clouds, and became intense just like it were a sunny day. How wonderful that I could walk and bask in the sun, too. 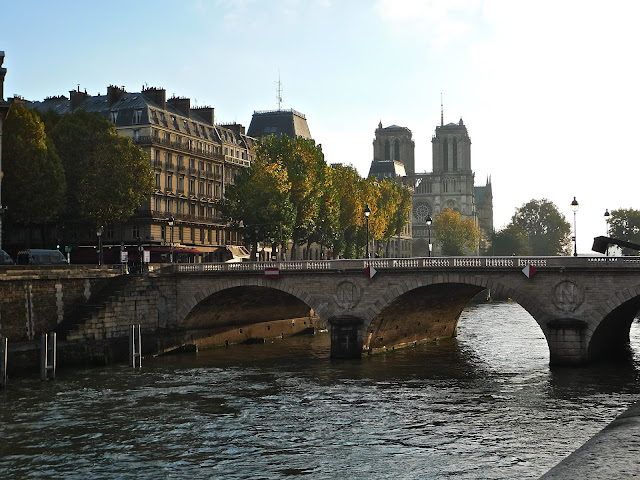 Finally, my destination is in sight

I was anticipating to get here in 50 minutes. But I was delayed by helping a tourist find her way around. It took me a good hour of brisk walking. Midway, I had to strip my layers of clothing as it was getting too warm to keep my down jacket on.

In that one hour, I was admiring how beautiful this city is - the architecture and the over-all planning by Haussmann. 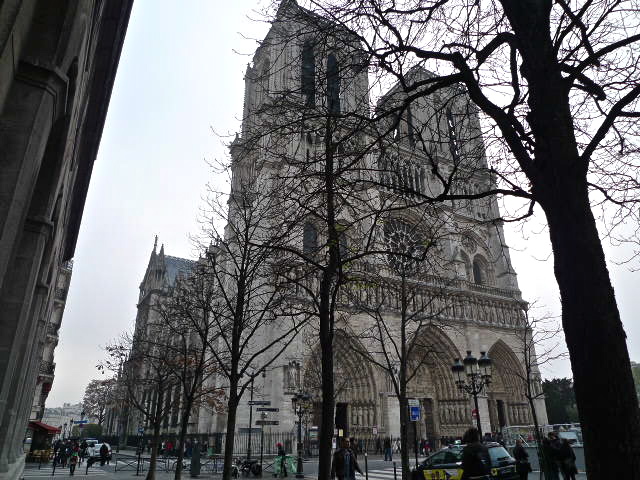 At the Notre Dame

After checking the official website, I learned that masses in the morning - the ones scheduled at 8:00 and 9:00 were held at the "choir." I was not quite sure where that was. Here is my discovery. 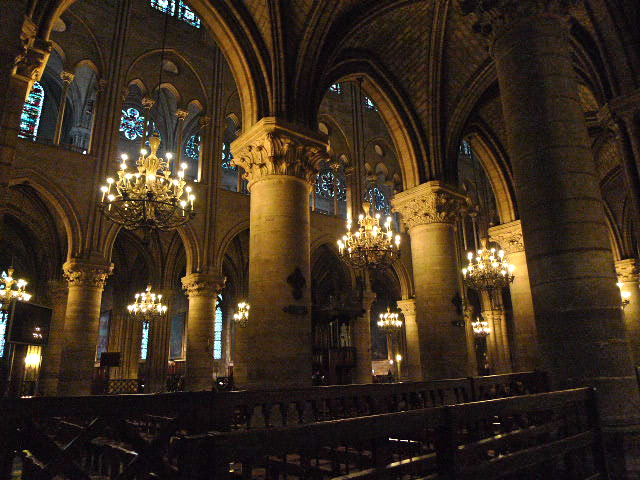 Even with the lights on, the church is relatively dark. 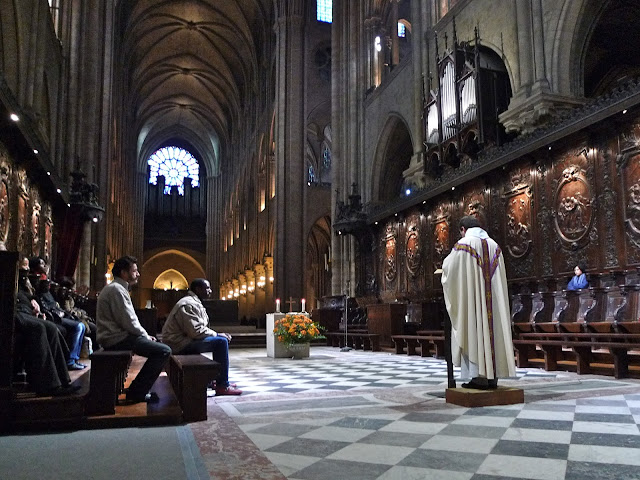 
This is a section which is off limits to tourists and to the public in general. It is an exclusive section now used by the choir, or just the organist, that performs for the daily masses and for the Saturday and Sunday evening masses. What a blessing it is to be able to hear mass, right here in this intimate setting, with just a handful of people. 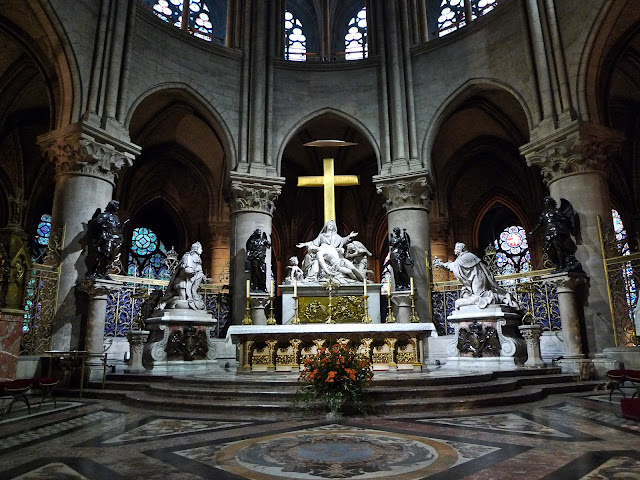 The Main Altar in the Choir


It was here that Emperor Napoleon I and Empress Josephine were crowned on December 2, 1804, during the First French Empire, in an elaborate ceremony presided over by Pope Pius VII. The crown and scepter were placed on the altar and blessed by the pope. After, Napoleon was anointed three times on the head and on the hands, after which he went up to the altar and took the crown made of gold and in the design of a laurel wreath - just like it was in the olden days in Rome, and crowned himself. Then he crowned the empress who was kneeling before him.

Napoleon Bonaparte I also had himself crowned as King of Italy and Milan with the Crown of Lombardy, on May 26, 1805. Here are some interesting notes about the Crown of Lombardy. it was one of the oldest, royal insignias for Christendom, made of a band of gold that was fitted on a circle, iron band made from a nail which is said to have been used in the crucifixion of Jesus Christ.

His investiture into the Italian royalty was presided over by the Cardinal Archbishop of Milan. As is customary with Napoleon, he ascended to the altar and crowned himself, exclaiming "Dieu me la donne, gare à qui la touche." (God gives it to me, beware whoever touches it.)

Napoleon I was the second to the last to be crowned with the Iron Crown of Lombardy. It is now a reliquary and it is kept in a suburb of Milan, in the Cathedral of Monza. 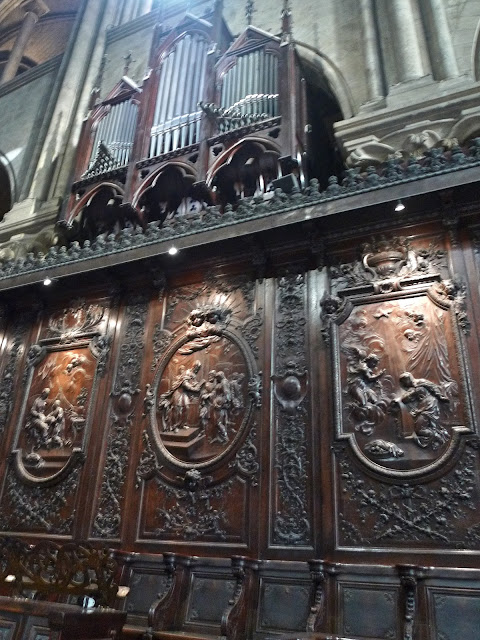 Distinct from the Grand Organ, the 19th century Choir Organ - with its two thousand pipes, two keyboards and a pedal board, is situated on the choir stalls on the North side. This is the instrument in daily use during the liturgy of the mass, and is played in symphony with the Grand organ (on the west window) on the weekends and special occasions, with the Notre Dame choir's and the assembly's participation.

For the early morning masses, there is no choir to lead in the singing, though parts of the mass are sang acapella by the celebrant. 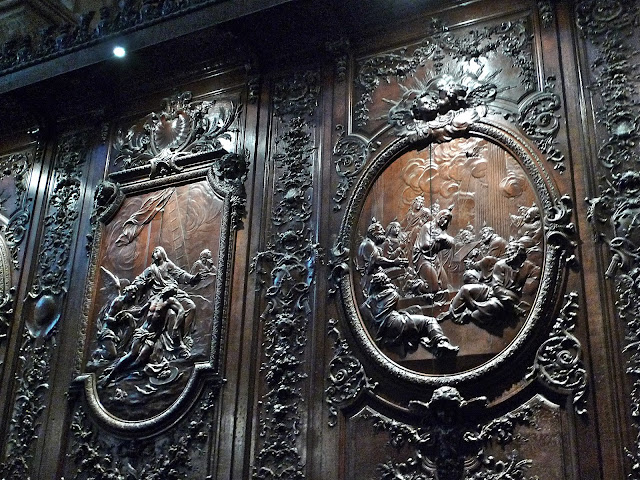 L - R: Jesus is brought down from the cross; the descent of the Holy Spirit on the apostles 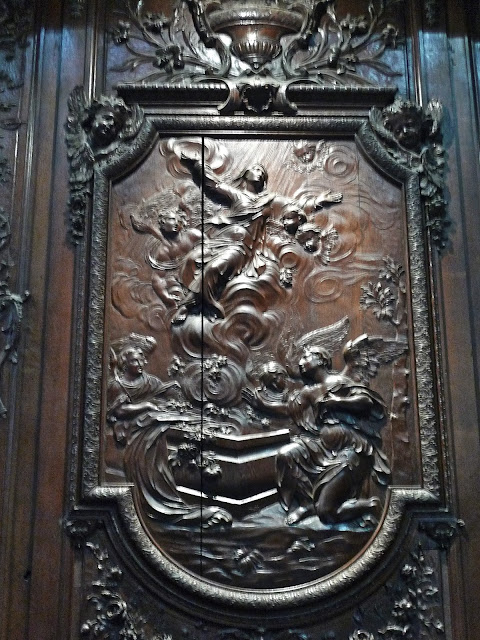 Attending mass at the Choir gave me the chance to see the details of this section. Catching my eye were the carved wood panels on the pair of walls, which bring the biblical events into life. 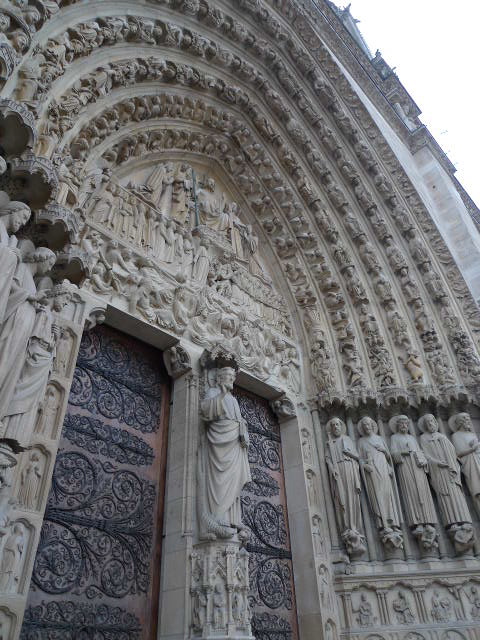 The façade of the church is cleaned up, though the interior parts still remain with centuries of accumulated grime. 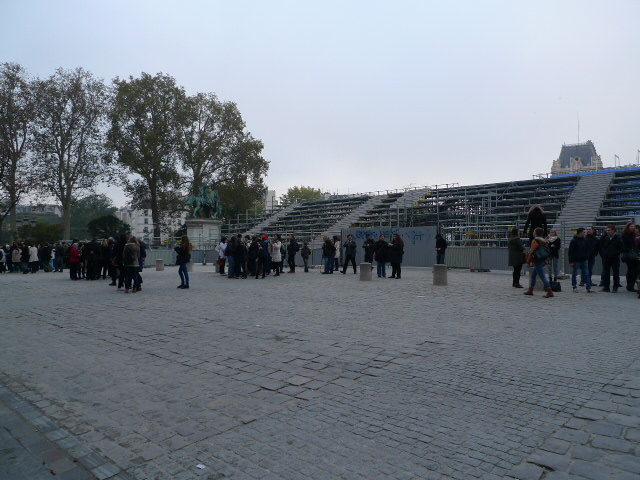 By 9:45 - as I exited,  the sun's brightness was beginning to wane and groups of tourists began to arrive. 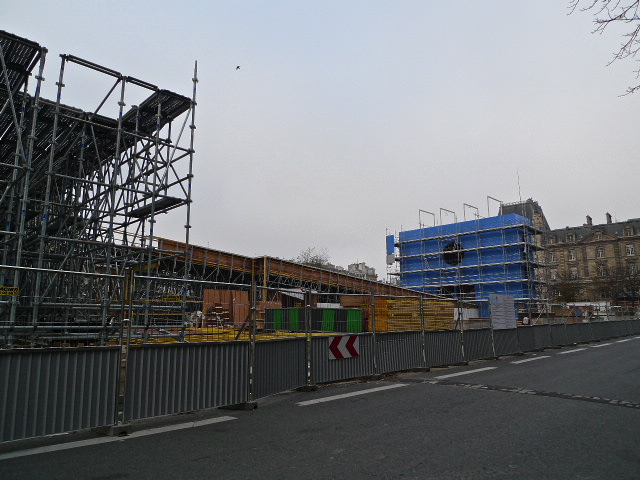 The parvis in front of the cathedral is now being transformed with a temporary structure, in preparation for the celebration of the 850th anniversary of the Notre Dame in 2013. 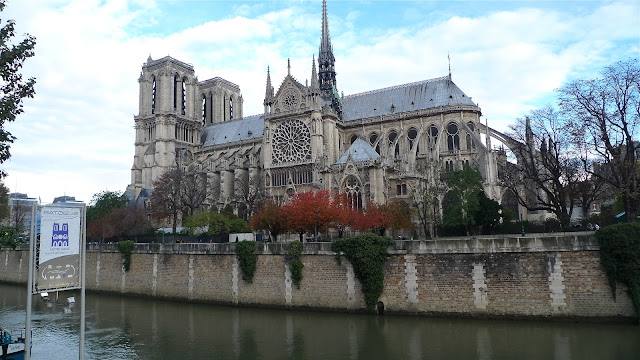 When I look at structures such as this, I cannot help but conclude how brilliant the architects and  engineers were in the past, to have conceived challenging designs, such as this, and managed to execute them based on manual calculations. I am in awe.

Let's make a date to come back here for the 850th anniversary celebration. It will be a year-long celebration from 12 December 2012 to 11 December 2013. The program for the  ceremonies will have music and presentations of the cathedral's history.

Timed with this are some restoration projects. There will be an  installation of eight new bells to replace those bells which were brought in in the mid 19th century, which were destroyed during the French revolution except for one which has been nicknamed "Emanuel." The new bells will produce the same 17th century sound of Emanuel. These bells are being fabricated in Villedieu-les-Pans, France. The long, overdue work on the grand organ will include the cleaning of the ancient pipes, to bring back its former, glorious sound quality.  A new lighting system will be put in place in the church's interior.

The cathedral, consecrated in 1163, had been the stage for many coronations of French kings. It is one of the major centers for Catholicism in France and draws an annual crowd of fourteen million visitors.

Be among the millions who will come to celebrate Christianity at the Notre Dame on this momentous occasion. It's one good reason to visit Paris.