The Art of Tolerance, Paris

Tourists and passers-by are being treated to a display of artistic bears at the Champ de Mars - a spacious, green field and garden situated between the Tour Eiffel and École Militaire. The exhibition, entitled L'Art de la Tolérance, began last  October 12 and will be ongoing up to November 18, 2012.

The bears are being used as message-carriers, to promote tolerance and understanding among nations. Dubbed as the UNITED BUDDY BEARS, the message is artistically transported to the audience by each painted bear, by 140 bears of nations recognized by the United Nations. 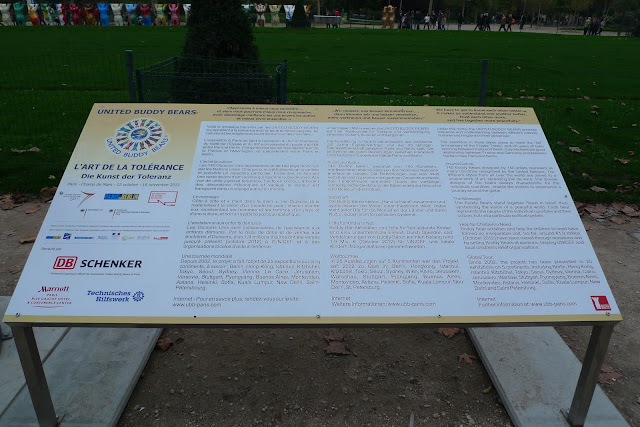 The purpose of the exhibit is explained in different languages. 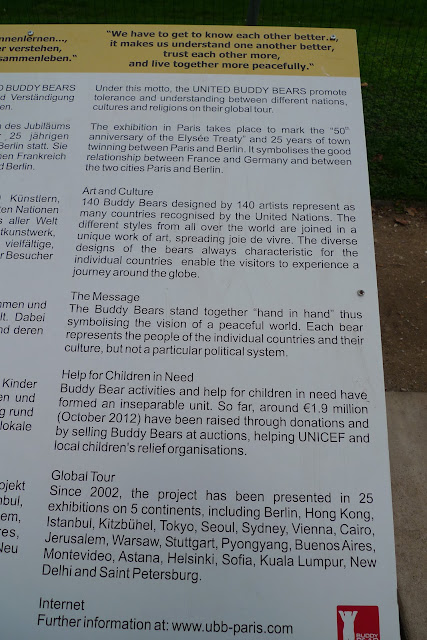 The message in English 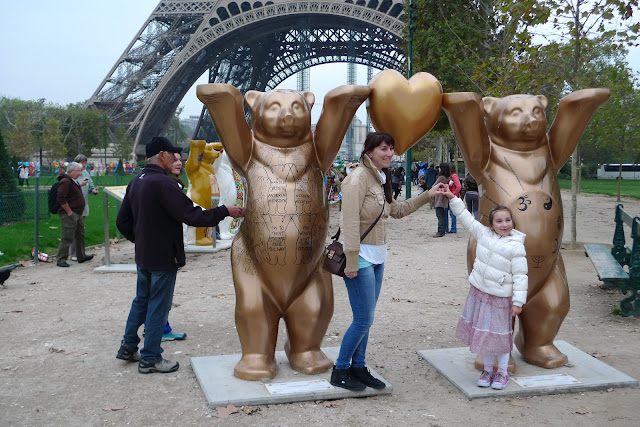 The visitors are welcomed by this pair of golden bears. While adults and children pose with the bears, others stop to read the messages in the vernacular. 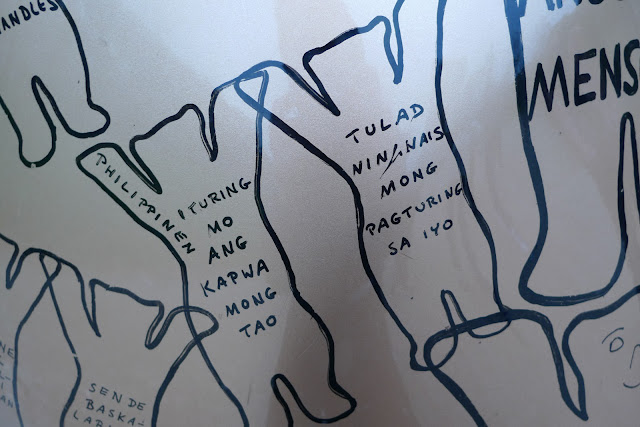 A message in Filipino 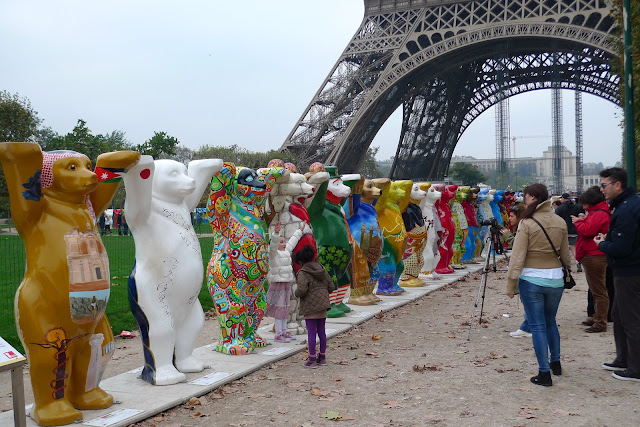 Two rows of BUDDY BEARS are in parallel formation. Here is one side... 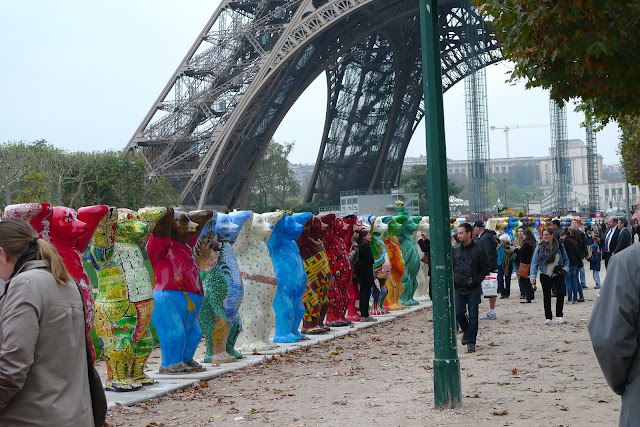 The artists who painted the bears have used their national colors; cultural symbols, things and objects; historical events; and political personalities, to represent their nations. Here are a few close ups of the UNITED BUDDY BEARS. 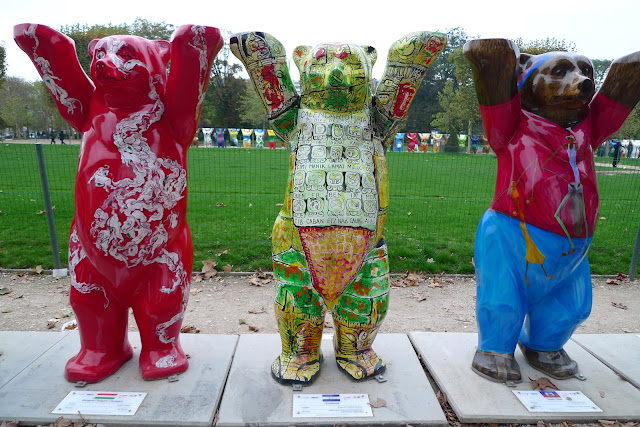 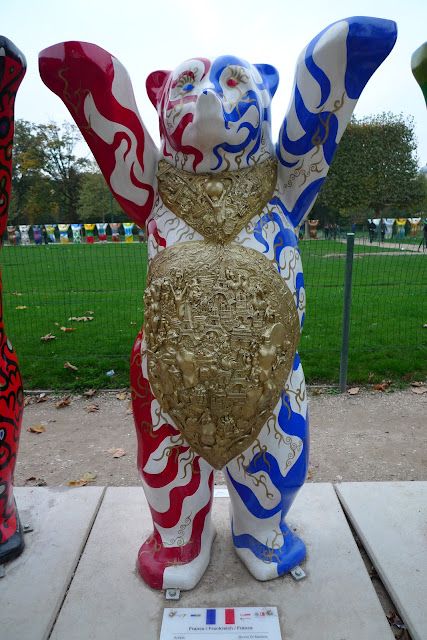 The French Buddy Bear stands out as the only bear designed with a three-dimensional design feature on its belly. It is a melange of symbolic representations from their historic past and iconic landmarks. 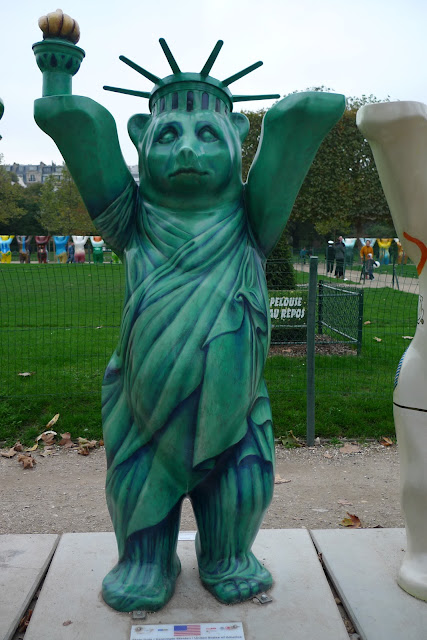 Imagine an immigrant being welcomed at Ellis Island, NY, by the Statue of Liberty Buddy Bear! What a warm feeling that would bring.

Since when did the bear bring us warm feelings? The bear is not exactly as warm and friendly when encountered in the wild.

Teddy Roosevelt, the 26th president of the United States, has something to do with it. There was an incident - a hunting trip in Mississippi in November 1902, where his attendants had cornered and tied an American black bear for him to fire the last shot, that made the bear the subject of talk. The president refused to do it but ordered someone to put the bear out of misery. A political cartoonist in The Washington Post, Clifford Berryman, made a cartoon out of the incident - a disgusted president with a lassoed bear, with "symbolic overtones." The cartoon designs continued, and in time the bears started to look smaller and adorable.

From the bear drawings of Mr. Berryman, Morris Michtom was inspired to create a stuffed-bear toy, displayed it and called it "Teddy Bear." He sent one to the president and he was able to get his approval to call the toy a Teddy Bear. Manufacturing and marketing the stuffed bear was an instant success for the Ideal Novelty and Toy Co.

In another part of the world, Richard Steiff of Germany, had also come up with a bear toy. It's introduction at the Leipzig Toy fair in March 1903 attracted an American buyer who placed an initial order of 3000 pieces, for shipment to the United States.

The Teddy bear continues to be a very popular gift to give to children for their birthdays and Christmas, for loved ones on Valentine's day, and to mothers after the delivery of their new-born babies. 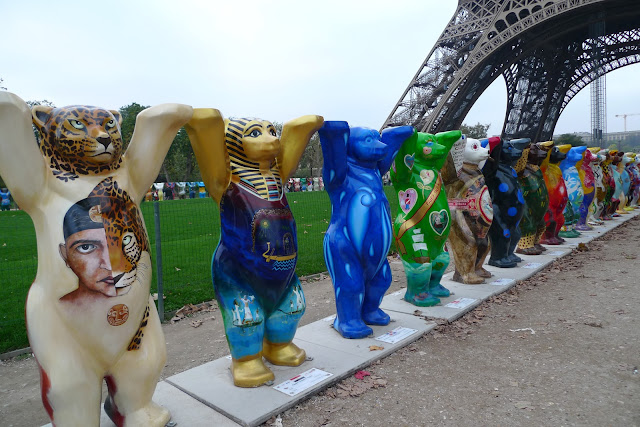 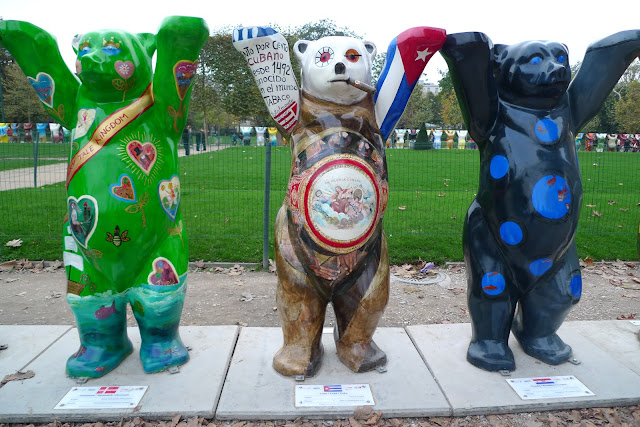 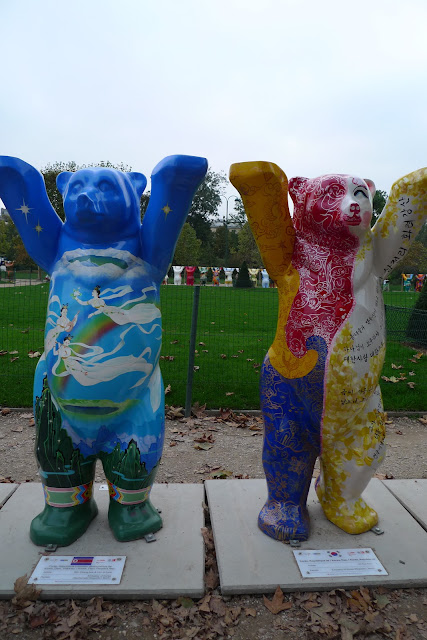 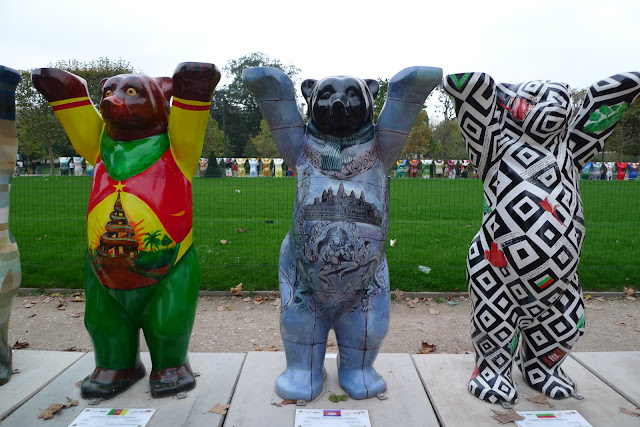 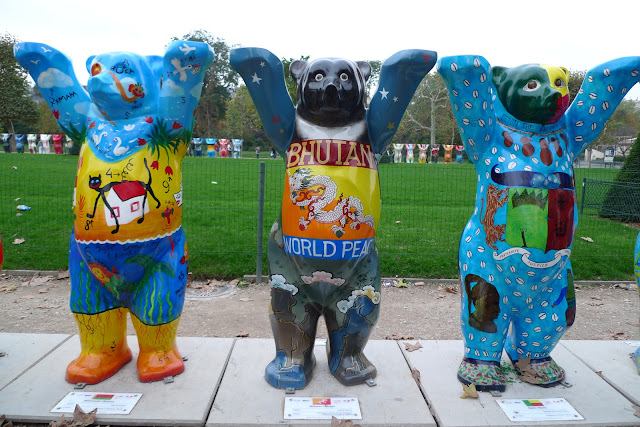 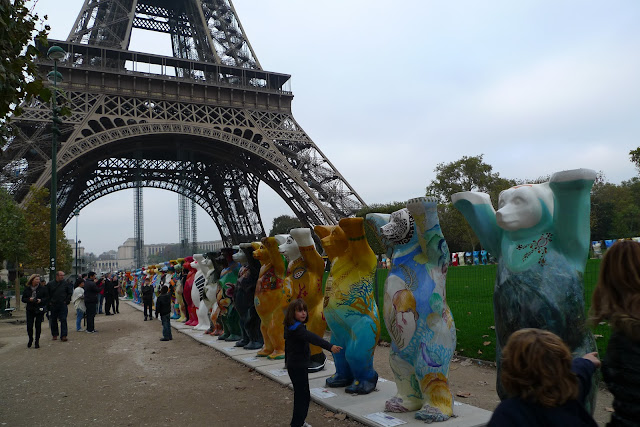 The bears on the other side 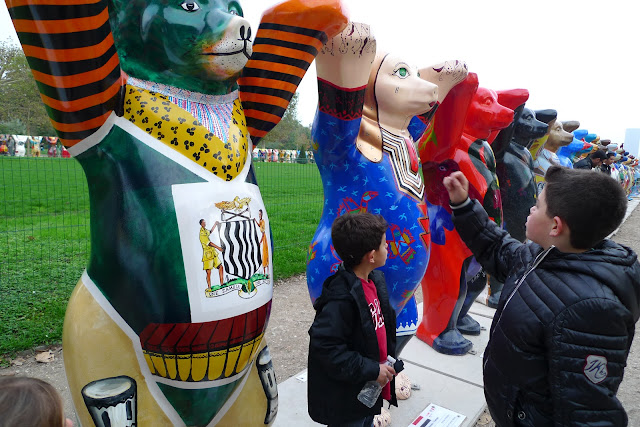 Left most: Zambia, by James Zimba; Next, to the right: Yemen, by Amnah Al-Nassin


The children had their own favorites, too. They took the time to figure out the messages, pose with the bears, hug them, and some took their own pictures. 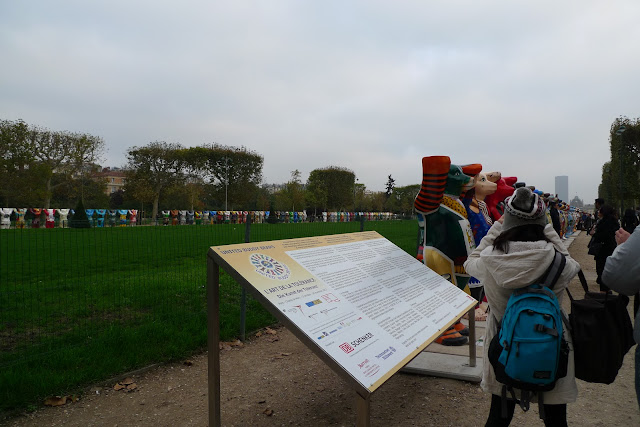 The bears brightened up a gloomy, chilly day. 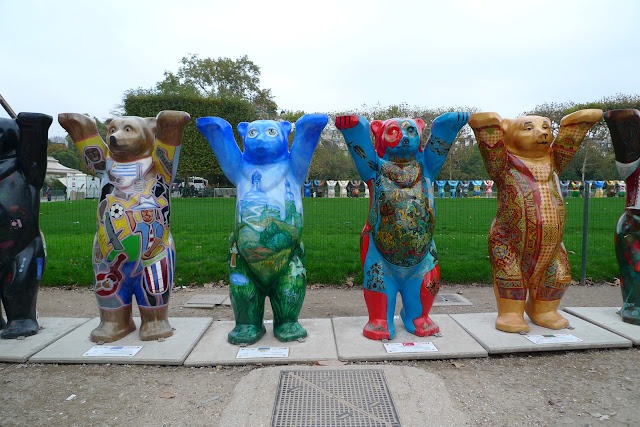 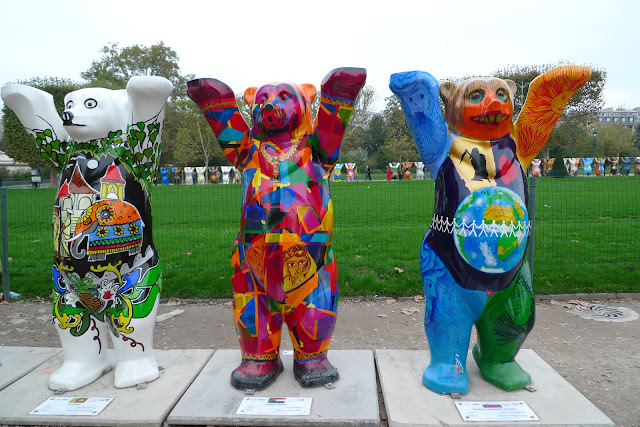 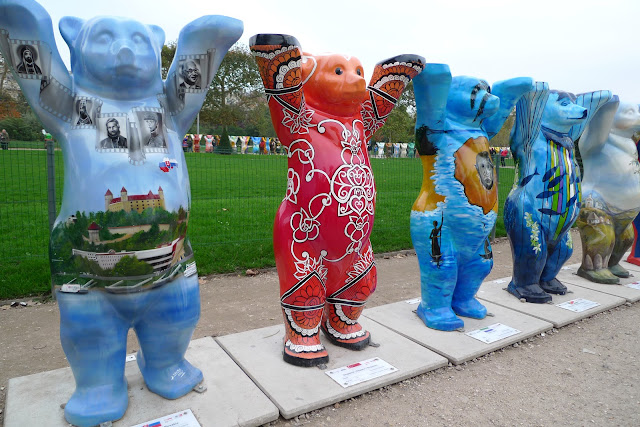 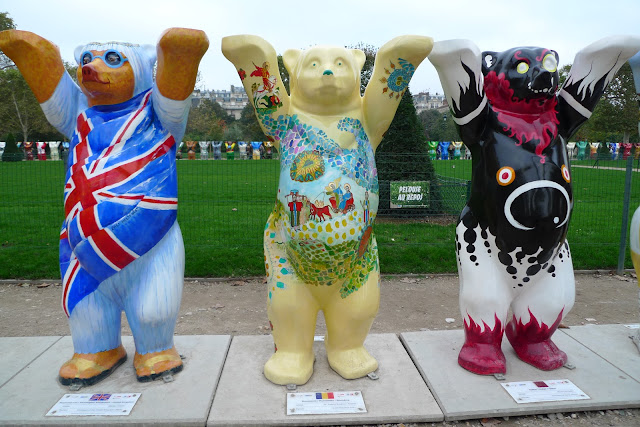 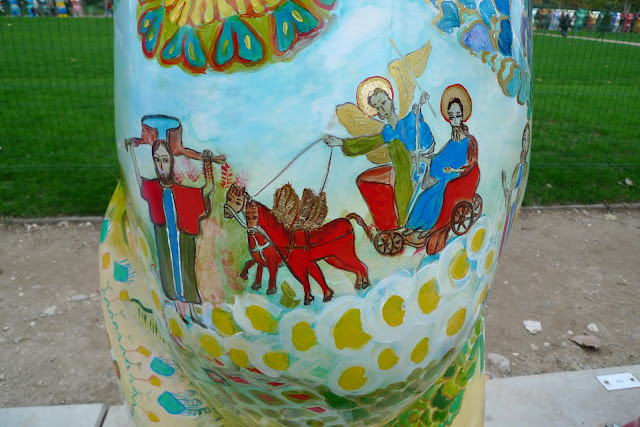 A close-up of the focal point on the bear representing Romania. 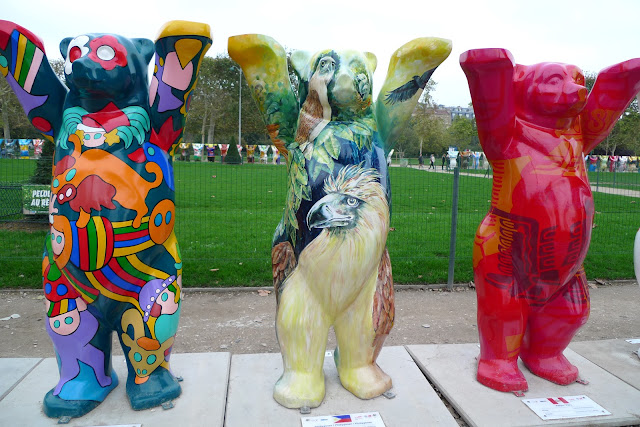 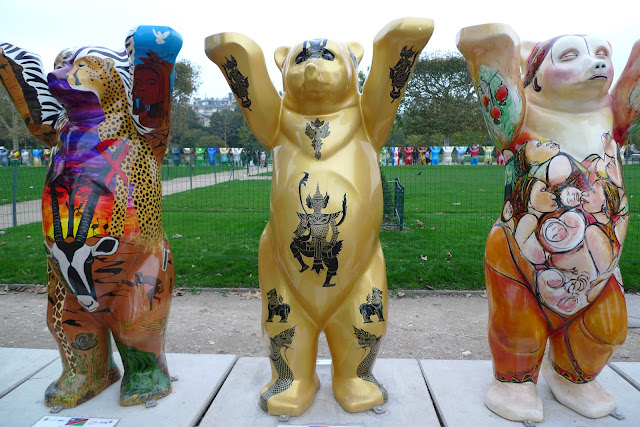 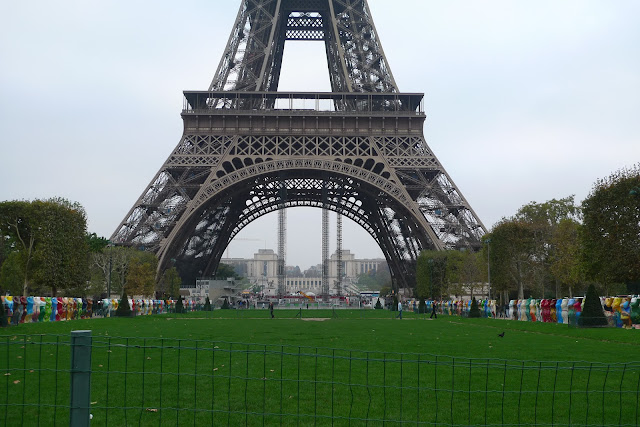 The UNITED BUDDY BEARS have been on a world tour since 2002. It's been to 25 countries in 5 continents. This tour stop in Paris coincides with the 25th anniversary of the pact of friendship between Paris and Berlin.

This exhibition is a continuous call for peaceful coexistence and understanding among nations, regardless of religious creed and culture.