Fruit Fudge for the Holidays

I have been cooking, baking and packaging my Christmas giveaways to family, friends and neighbors. Then, my friend shared her fudge recipe via Facebook, a couple of days ago, and I have been playing around with it, adding different things:
3 cups chocolate chips
1 can of condensed milk
1 cup nuts
1 tsp. vanilla

The recipe is easy to make and it's fun to be creative with it. 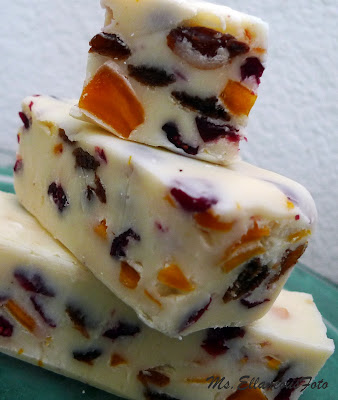 From the basic recipe, I came up with a FRUIT FUDGE, as inspired by my Bejeweled Fruitcake. This has become one more addition to my holiday gift boxes of goodies to give away.
Preparation time: 30 minutes
Do-ahead preparation: line a meatloaf pan with parchment paper, on all sides. Crease the corners.


PROCEDURE:
1. Place all your fruits in a bowl and add the brandy and toss lightly. Set aside. 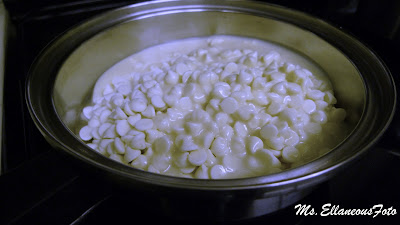 2. Throw the white, chocolate morsels and the condensed milk into a flat, thick-bottomed saucepan and cook at a low temperature, stirring constantly. My setting was at "2" out of "10" on a glass-top burner. 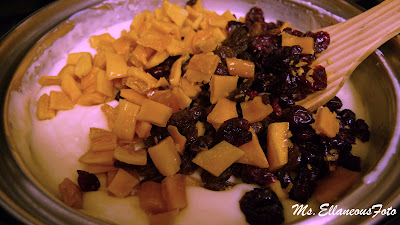 2. When the white chocolate is melted and blended with the condensed milk (about 15 minutes of cooking time) turn off the flame and add the fruits with the brandy and mixed well to incorporate the fruits. Add the butter, and continue mixing. 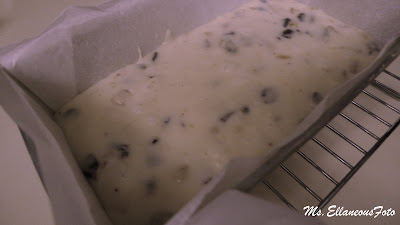 3. Pour the mixture into your lined pan. Shake it a bit to even the spread and let it cool on a wire rack for several hours. If you are in a rash, refrigerate it. 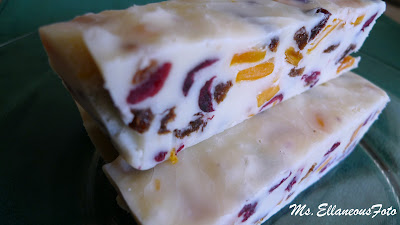 4. Place it in the freezer for 10 minutes before cutting it up. Use a sharp knife to cut the fudge into the desired sizes - for sampling or for packaging.


From a sampler size, my food critic (my daughter) said that it tasted like a fruit nougat. The orange rind gave it a burst of fresh flavor. 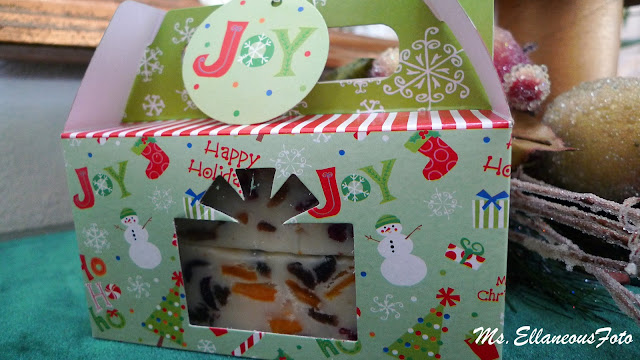 This one is good to go!
Have fun with your fudge making. Make your own versions and do share what new creations you come up with.
Posted by yolanda at 13:44 2 comments:

The Christmas countdown has begun. With the decorations in place, I've been doing research on gift ideas for my friends and family. The tradition of giving presents during the holidays can, sometimes,  seem like a burden when trying to find budget, fappropriate options. Lately, I've been exploring new recipes for the perfect home-made gifts along with interesting books. It is is important to not only feed the stomach, but, the soul. I can't wait to share with you more tips and DIY tricks in upcoming posts. For now, here are some great deals on books that may be of interest to you:
Holiday Deals: $10 or Less
The Year's Top 20 in Fiction

It's a season to be spent with family and friends. On the occasion of a visiting friend, we included "Christmas at the Mission" in our schedule of things to do in San Juan Capistrano.
After patiently dealing with the long queue on the 5 Freeway exit to Ortega Highway (74 Freeway), we made it to San Juan Capistrano, though, later thn we had thought. 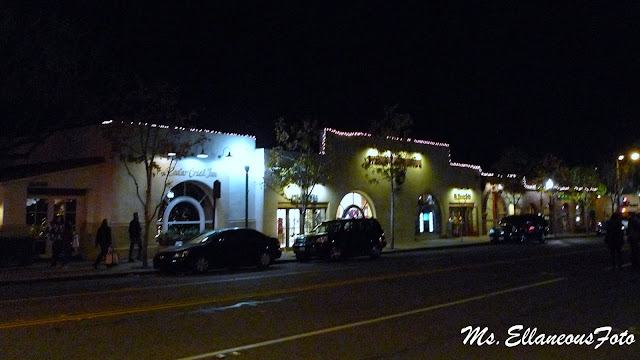 The town was festively decorated and full of Christmas spirit. 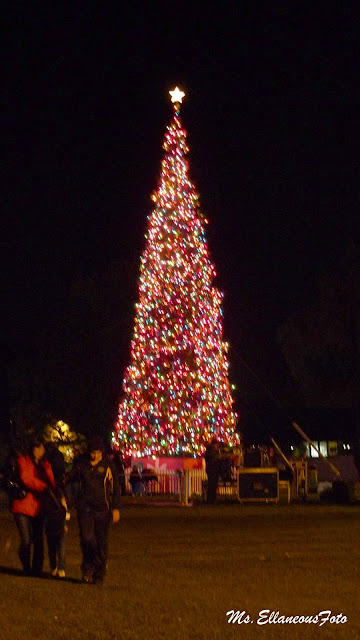 We missed the lighting ceremony in the park. 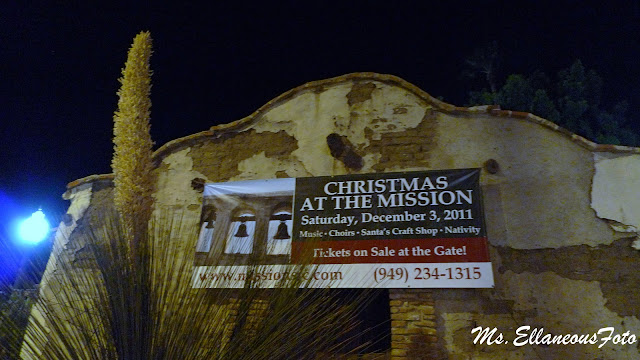 We got to the mission and did not have to wait in line for too long as we had pre-bought our entrance tickets the day before. 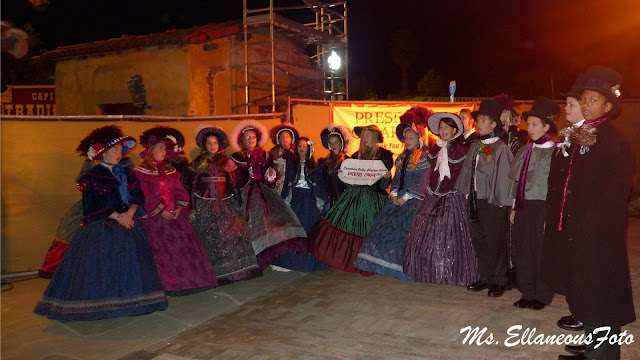 It was a perfect welcome as we heard this group of carolers sing our favorite Christmas carols. 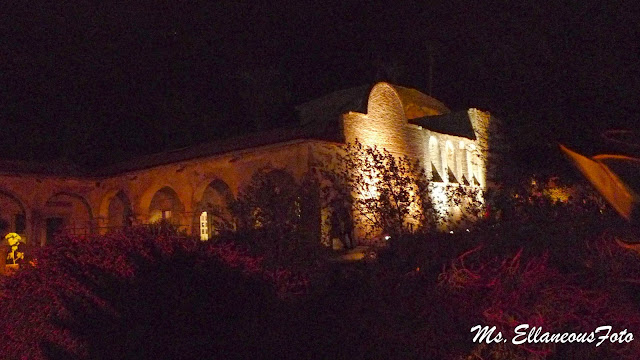 The San Juan Capistrano Mission grounds were lit up and we were free to wander around. It was like an open house.
Located in Orange County, Southern California, San Juan Capistrano was founded by the earliest inhabitants of the land. They were Indians who were hunters and gatherers. There before the Europeans came in 1776, the tribes passed on the leadership within the family, with a council of men to support the leader of the community. They were peaceful people who only resorted to war to avenge crimes committed against them. They had a deity - Chinigchinich, whom they worshipped with their own religious ceremonies, in a small structure centrally located in each community.
Spain had already colonized Mexico in 1519. Not too far up the coast, she continued to colonize  the New World, and came upon the West Coast in the 1700s. The Spanish explorer, Hernan Cortes, set up military installations and planned to transform the Orange County Indians into Spanish citizens, even encouraging intermarriages between the military personnel and the local maidens. Soon, the Spanish missionaries arrived to teach the Indian population, to convert them to Christianity. The  missionaries divided the Indians into two groups, based on their proximity to the missions: the Juanenos and the Gabrielinos. These were small tribes thought to have belonged to the Shoshone family, who shared a common language.
The organization of Spanish missions were dependent on existing conditions. The San Juan Capistrano valley was ideal as it was arable land, with fresh water supply, and a local population to do the work. For this work, they were promised Spanish citizenship. On November 1, 1776, it became the seventh mission in California. This was one of the most successful missions, producing from farming, herding, candle and soap making, iron smelting, tanning, and weaving operations. The other natives were involved in building abobe homes for the native and intermarried families.
However, things changed when Mexico earned her independence from Spain. A Secularization Act came about in 1833 which diverted the mission lands to go to the political appointees, and not to the Indians as previously promised. Instead, the land grants were issued to powerful men and their families, and this started the Rancho system.
San Juan Capistrano was declared as a pueblo and the mission was sold to John Forster for $710.00, an Englishman who had settled down there after marrying the governor's sister. The decline at the mission's productivity began.
In 1848, the American victory over Mexico brought them the California territory, and statehood for California came in 1850. Life and culture changed. Mexico sold 55% of her territory to the United States, including Arizona, California, Texas, New Mexico, Colorado, Nevada, and Utah for $15,000,000.00. 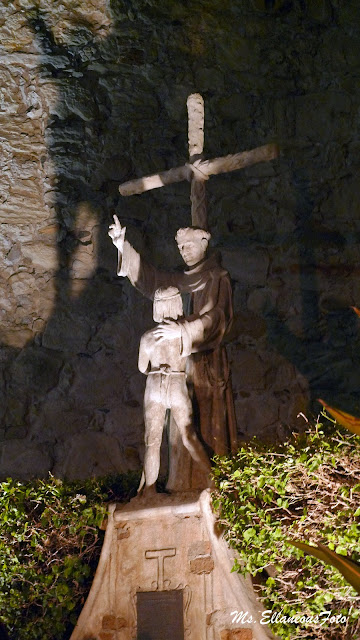 The statue of Junipero Serra

Fr. Junipero Serra, a Franciscan, was the Spanish priest who led the band of missionaries that ended here. Soon after the mission was built, Fr. Serra fled when he faced opposition from the American Indians. He did come back to bring them to Christianity. Language presented a problem to effective communication. But they managed to train the Indians to do wine making, tanning, blacksmithing, ranching, and manage small business operations. Fr. Serra's other problem here was how the Spanish military was using the Indian labor for its purposes, like slave labor, in their military campaign. In the eyes of his parishioners, his religious message was in contradiction with the military's program.
A controversy came up as an issue brought against Fr. Junipero Serra's cause for sainthood accused him of having taken advantage of the Indian population and mistreating them. He had taken the normal course of feeding the Indians with milk to make them strong, as they did in Spain. But some of the children died. It was only not too long ago when science came with the pronouncement that the coastal people who lived along the San Juan Capistrano valley were lactose intolerant. This was something that Fr. Serra could have not figured out nor diagnosed.
His beatification came on Sept. 25, 1988. It was a descendant of native Indians, Andrew Galvan, whose forefathers were baptized by the missionaries, who came to fight for Fr. Serra's sainthood, along with Fr. Noel Francis Moholy who had advanced the cause for his sainthood. 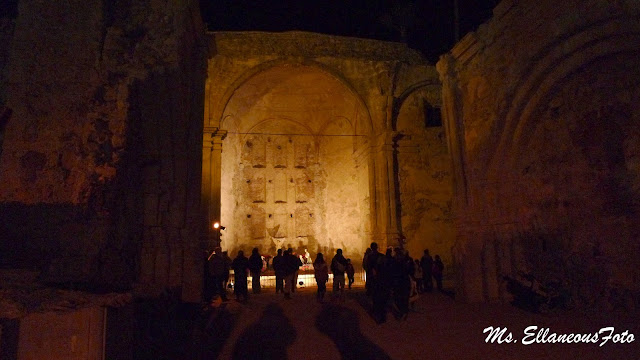 We wandered through the grounds which were once part of the stone church. 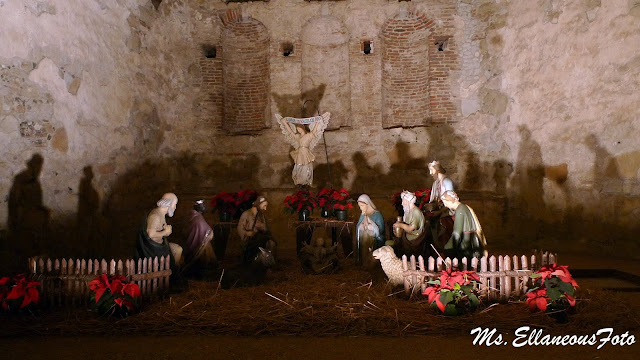 In what used to be the main altar section, the manger scene is displayed, a place where the visitors came to pay homage to the Infant Jesus. 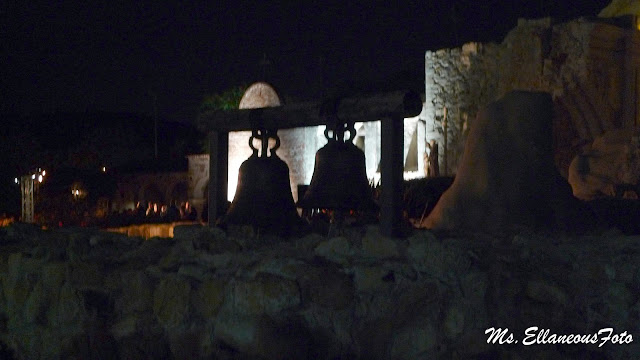 On December 8, 1812, an earthquake with a magnitude of 6.9 caused major damage to several structures in the mission, while the main church was destroyed, killing 40 natives who were attending the 3:00 p.m. services. It is believed that the earthquake had ruptured from the San Andrea's fault, at Wrightwood.
There are remnants of the little that survived the earthquake and they have been left on the grounds. From the stoneworks in view, there were no metal bars to reinforce the walls. The bell tower was among those badly damaged. 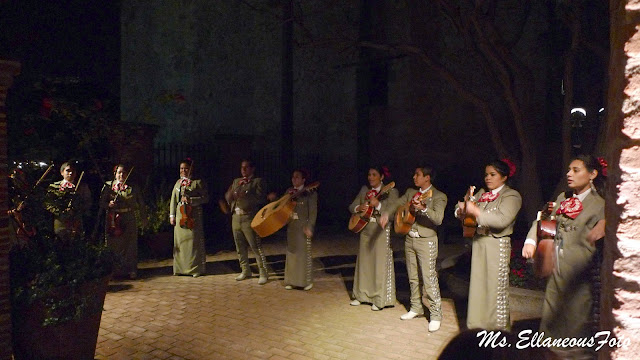 As we crossed to get to the central courtyard, Mariachis were entertaining us with their traditional Mexican songs. 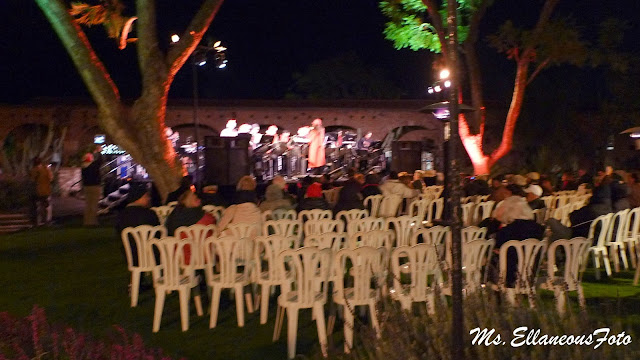 A stage was installed for some performances, for the public. 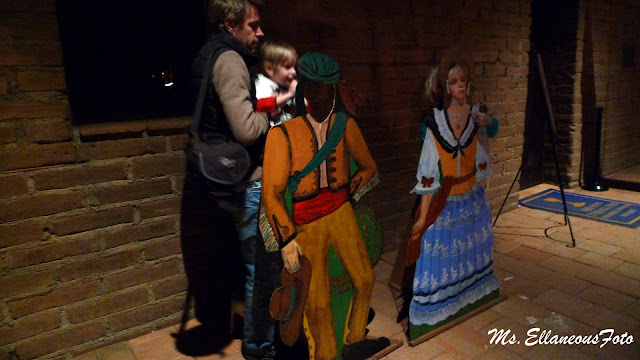 Activities for the family included this costumed set, for a picture-taking opportunity. 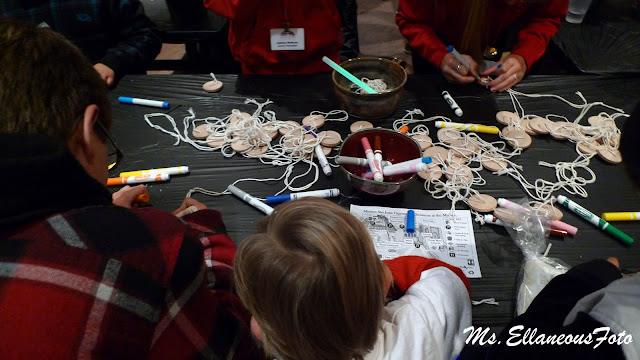 In one of the rooms in the corral, art activities were organized for the children. Here, they are decorating a toy made of a round wooden disc, with two strings running through the middle. 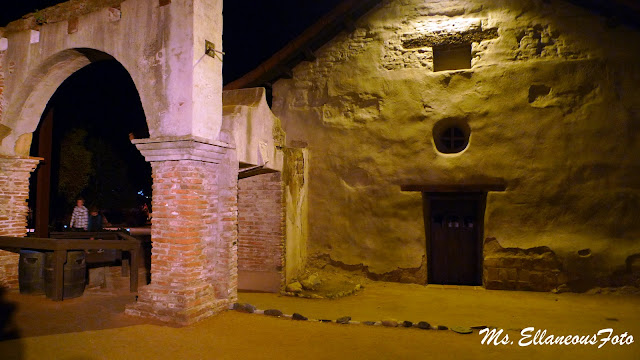 The finishing touches on the old buildings are visible here: stucco mud was applied over the stones, then smoothened up; while bricks were applied as a surface treatment to pillars.

As we toured the rooms around the corral, we saw how the Indians lived and worked during the time of the mission's existence. 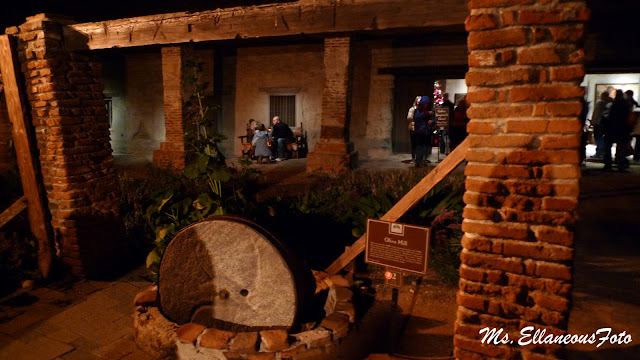 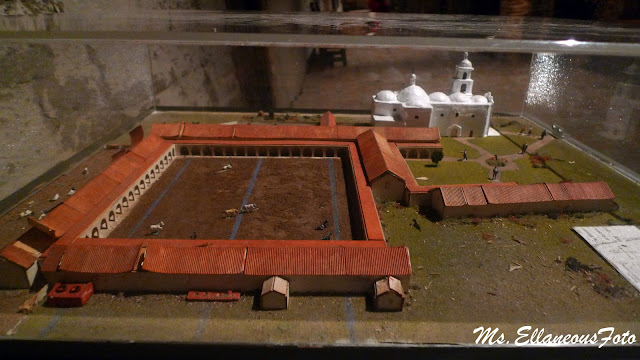 
Junipero Serra's favorite saint was a warrior missionary, Giovanni de Capestrano, born in 1386. He died on October 23, 1456 and was canonized in 1690. Fr. Serra had gotten permission to name one of the missions after him, thus he named this the San Juan Capistrano Mission.

After statehood, this town changed from being peaceful to chaotic. Squatters, drifters and bandits came. It became a relay station between San Diego and Los Angeles. With this traffic, cowboys who were brought in by the ranch owners would cause drunken fights on the streets. Stagecoach bandits and robbers became plentiful.
Later on, because of its location, the town saw a real state boom with the rise in construction for homes, stores and a hotel, with the discovery of gold in Northern California. It was after the 1900s that stability began to settle in, when it became a farming community, once again. With drought and a small pox epidemic and an increase in land taxes, the rancho system went into decline. Land was bought by people interested in farming. Previously, barley, oranges and walnuts were planted.  With the railroad system that had been set up there in 1887, their products became accessible. This resurrected the prices of the land.
Through out this time, the mission remained in disarray. Efforts were made but it was only in 1910, when Fr. John O'Sullivan came, that progress was made towards the restoration of the mission. It is because of a general plan, designed by the citizens in the 1970s, that this historic site has been preserved, allowing us to have a glimpse of the unique heritage of the mission, in perpetuation.
The mission San Juan Capistrano is a non-profit historic site sustained by tourism and donations. If you would like to help, you can make your tax deductible donations payable to the Mission Preservation Fund, P.O. Box 697, San Juan Capistrano, CA 92693.
Coming to celebrate Christmas at the  Mission was another occasion for families and friends to get together, to get into a deeper religious experience about Christmas. There are other reasons to come and visit this place, and for me, that is to hear mass at the Serra Chapel, which is the same chapel that dates back to 1776.
San Juan Capistrano Mission
Ortega Highway (74 FWY) west of Interstate 5
Open daily from 8:30 a.m. to 5 p.m.
(closed Thanksgiving, Christmas & Good Friday p.m.)
The Mission grounds are available for private functions and corporate events.
Guided tours of the Mission can also be arranged.
For information, call (949) 234-1300.
Posted by yolanda at 17:36 7 comments: