Decorating for the Holidays

It's that time of year when we change gears and go into decorating for the holidays, from Thanksgiving to Christmas. A trip to Roger's Garden in Newport Beach, California,  made me think of how I was going to decorate the house to celebrate our favorite time of the year. 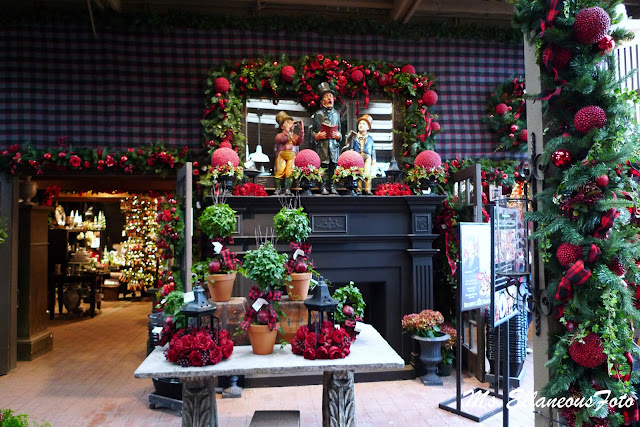 Lots of ideas are presented here.

Decorating for the holidays goes back to centuries past. The use of light during the Christmas season has been  a tradition among Christian and non-Christian cultures.  In the mid 17th century, small candles were used to light up a Christmas tree. Glued with melted wax to the branches of the tree, they festively lit up the tree.
When electricity was discovered n the 19th century, Edward H. Johnson - who had become the president of the Edison Electric Light Company, had Christmas light bulbs of red white and blue made especially for him, which he then hand-strung together. He headlined in the papers as having had the first electrically illuminated, revolving Christmas tree, which was pretty, elaborate, and entertaining to his children and his guests. He soon became known as the "Father of Electric Christmas Tree Lights."
At the White House, President Grover Cleveland had the family Christmas tree illuminated with multi-colored light bulbs, in 1895. It was a luxury reserved for the wealthy as it is estimated that it cost about $2,000.00 to light up one Christmas tree, in the early 1900s, when General Electric started to market the Christmas light kits.
It took a fire in New York in 1917, due to the use of candles on the Christmas tree, for change to happen. Albert Sadacca, then a young man of fifteen years, was moved by this tragedy that he persuaded his family who owned a novelty lighting company to manufacture Christmas lights that were to be sold at a reasonably affordable price. First, sales were poor, but as electricity became a household utility, the use of electrical Christmas lights eventually became popular and part of decorating for the holidays. Albert and his brothers organized National Outfit Manufacturers Association in 1920 - a trade organization, which later became the  NOMA Electric Co. Their associate members, together, cornered the Christmas light market until the 1960s.
In 1932, the practice of lighting the National Christmas Tree on the south side of the white House to commence the holiday season celebration was initiated by President Calvin Coolidge. Then, with the stellar attraction of a lit up, giant Christmas tree at the Rockefeller Center in 1956, many more Americans got enthused to decorate for the holidays, indoors and outdoors. 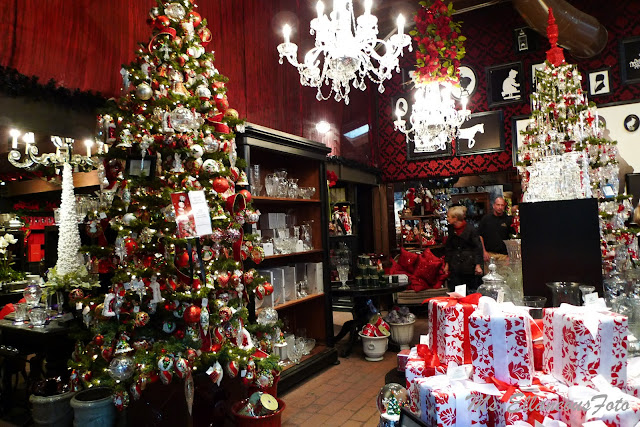 The trimming of the Christmas tree is a take off from a pagan practice. In the pagan tradition, boughs of evergreen branches were decorated with gold and silver and brought into the home to honor the winter solstice between December 20 and 23. As the days were getting shorter, the pagans feared that the world would come to an end. With the evergreens staying fresh, it gave them hope.
Our present-day tradition of decorating the tree dates back to the 16th century in Western Germany. It has different symbolisms for different people and faith traditions. In the Christian tradition, it is pointed to heaven above - a reminder to us to seek heavenly treasures more than earthly ones.
For both religious and secular interpretations, it is the "Tree of Humanity." The decorated Christmas tree only became popular to the western world in the 19th century. From paper ornaments to glass balls and Christmas lights, they now come in a variety of themes as depicted by ornaments made from glass, plastic, resin, paper and other materials. Once only measuring about two feet and set up on the dining table, it was in America that decorating taller trees gained popularity. 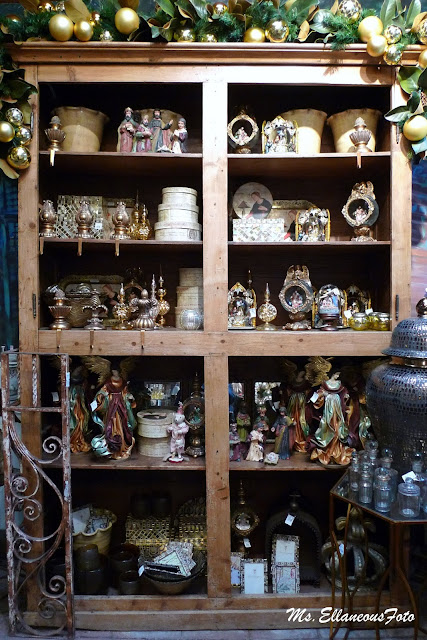 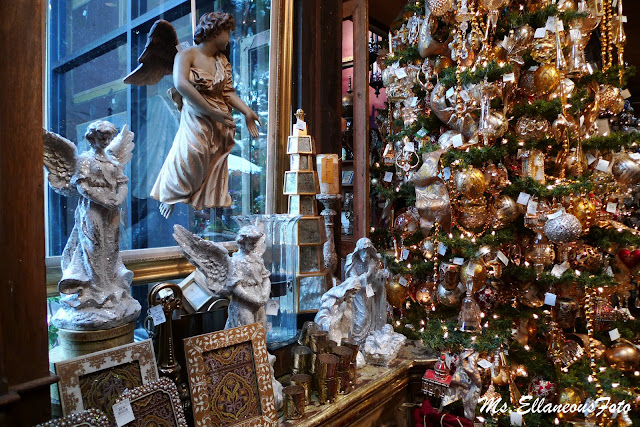 The theme for the "reason for the season" - the birth of our Lord in the manger scene.
Collectors' items: 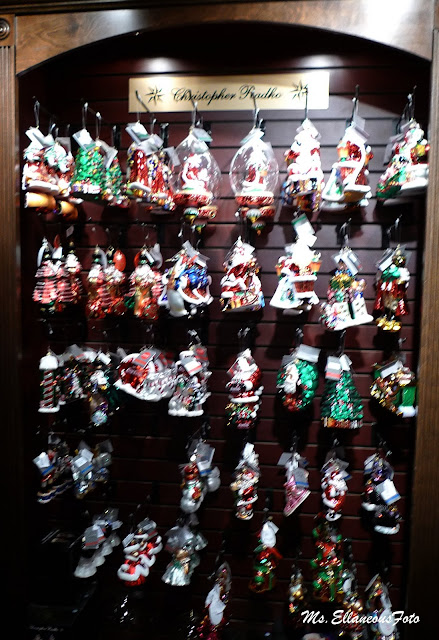 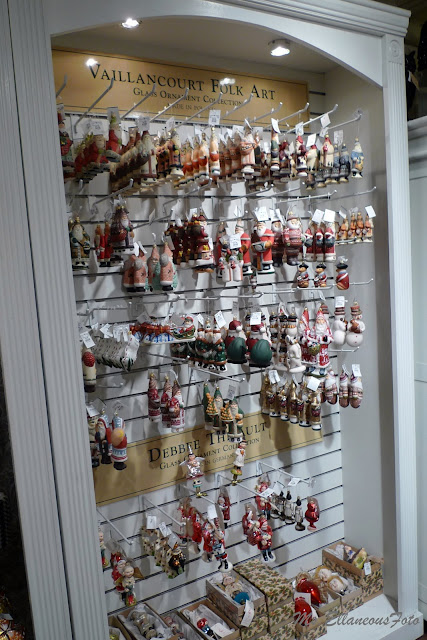 What makes an item collectible? For what reason does one start a collection? We all started collecting something when we were still young. When we look at what we have gathered, each piece brings back a memory.
In collecting Christmas ornaments, the artist's style is much liked by the collector. Each piece added to the collection, year after year, is carefully chosen based on one's taste. Some may collect from a singular  designer's work, while other's may collect from a number of designers. The collection maybe thematic or random, depending on what appeals to the collector. As time goes on, each piece is likely to bring back memories.  For others, collecting is an investment that they plan to cash in, in the future. 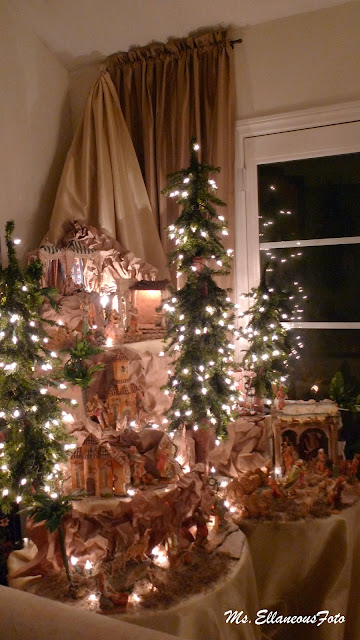 After visiting the Metropolitan Museum of Art in New York one Christmas season, almost 12  years ago, I was inspired to collect a Christmas nativity village. Through the years, I was able to add a major piece or two from the Fontanini Collection. This year, in place of the usual big, decorated Christmas tree, I have set up the nativity village in a cascading manner, in one corner of the living room. This design came to mind when I remembered the Church of the Holy Sepulchre in Israel, which was built around the different levels of the whole mountain side - where the markers of where Jesus was nailed to the cross, died, and was buried have been incorporated.

At the top of my display is the Emperor's Pavilion under guard by a soldier, and below it is the census taker at the Census Building, then the village people going about their daily lives. Next to the right is the Holy Family with the Weaver's Tent above it. 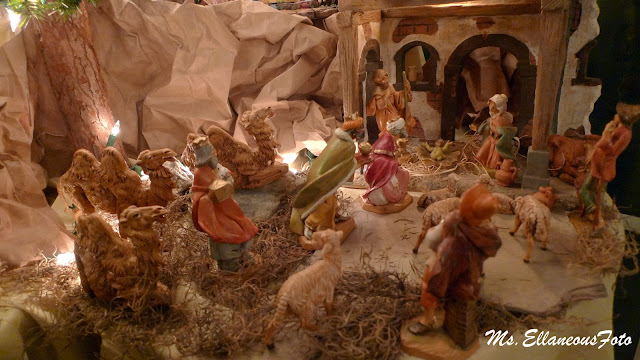 The manger scene
The nativity of our Lord - the crèche, has always been the major theme and focal point in our Christmas decorations at our home. It is the retelling of the story according to the Gospels of Luke and Matthew.  Matthew 1:21: "She will bear a son and you are to name him 'Jesus,' because he will save his people from their sins.”
The commercialism of the celebration of Christmas is nothing new. During the middle ages, St. Francis was inspired to create a nativity scene when he saw some shepherds and their flocks on the hills in Greccio, Italy, and also his visit to the birthplace of our Lord in the Holy Land. He envisioned a live production of the manger scene - the birth of our Lord, to bring the biblical teaching about the birth of our Savior to the people, that they may have a deeper experience about the Christmas holiday being celebrated. This was to inspire the worship of Jesus.
He proceeded to Rome to get permission and Pope Honorius lll gave his consent for St. Francis' elaborate plan to recreate the nativity scene. With the help of a rich nobleman from Greccio, Giovanni, the production cost was funded. And so it came to pass in a cave in the countryside, in Greccio. People were hired to play the parts of  Mary, Joseph, the shepherds, with a life-size wax figure representing the infant Jesus. To complete the scene a manger, straw and live animals - the ox and donkey, were added, under the direction of St. Francis. In the meantime the local town's people noticed all the goings on on the countryside.
On Christmas eve, in 1223, the local inhabitants came to the hillside to worship, and they began to understand the meaning of the first Christmas in Bethlehem. Just like the shepherds, angels, and the three kings, they came to adore the Infant Jesus. According to St. Bonaventure's writings based on the eyewitnesses' accounts, St. Francis was overjoyed for the people, for the deeper religious experience they had gotten out of this. 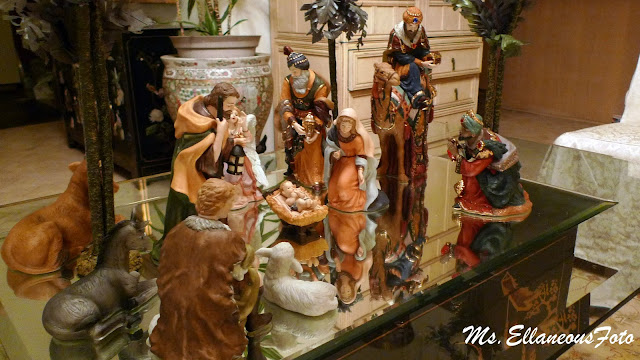 
This nativity set gets set up on my coffee table. When my kids were still young, I assigned each one of them to play the role of one of the magi. They took each king with them and they were supposed to travel and make it to the table on Christmas day. As I looked around a couple of days after, one king had landed on the bar, another one was behind the bedroom door, and one was by the front door. That was an interesting journey for the kings who eventually made it on time to join the shepherd and his flock, to adore the new babe wrapped in swaddling clothes. 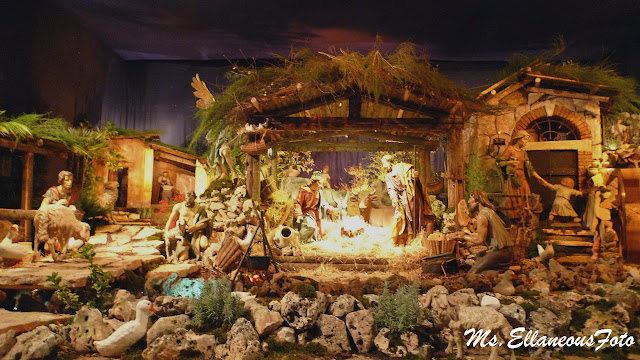 In December, 2009, I had the blessing of visiting Rome. At St. Peter's Basilica, this manger scene displayed on the side of the church received center stage attendance among the pilgrims.

In the family room, I livened up some sections with... 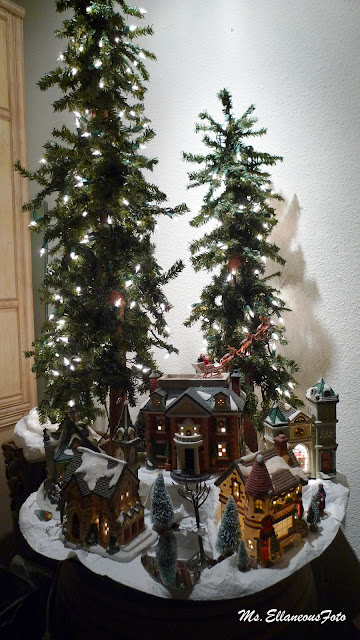 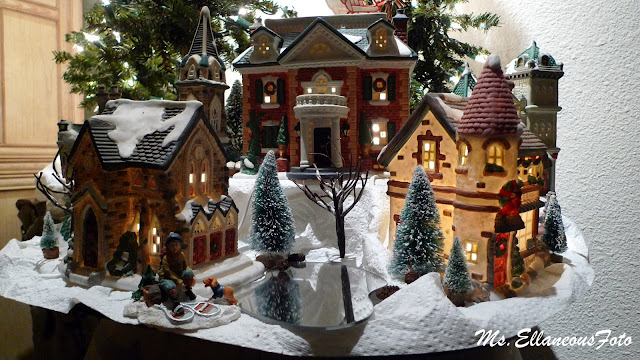 Christmas village scenes - on a side table...reminiscent of the days we used to go up to Lake Arrowhead for the kids to enjoy some winter play in the snow... 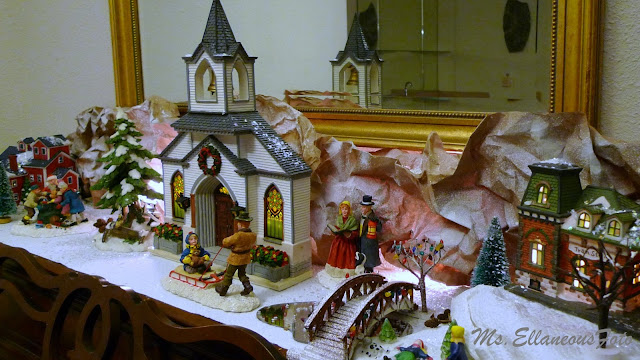 and on my piano.

When I started decorating, I decided that I was not going to buy anything and will just have to do with what I had and could find around the house. For the snow cover, I used paper towels; for the mountain backdrop I used the paper bags from the super market - cut them out to lay flat, then crumpled them in no particular fashion and stretched them out to drape around the areas I wanted to cover. For the the piano winter scene, I sprayed the crumpled paper lightly with white paint in a well ventilated area. 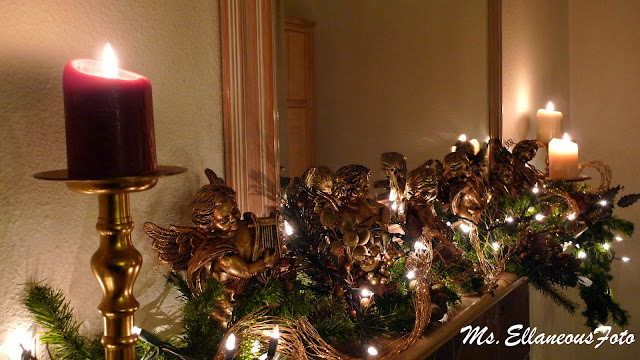 A choir of angels on my fireplace mantel
Decorating during the holidays helps put us in the spirit. For merchants, it attracts the consumers to their stores. However you prepare for the holidays, may it be a meaningful celebration for you and your family. Happy holidays and have a blessed, merry Christmas.
Posted by yolanda at 16:02 2 comments: