My schedule was set for Saturday, November 12, rain or shine, to attend an event at Roger's Garden, Newport Beach: Chef Gabriele Bertaccini of House of Balsamic was giving a presentation on the uses of balsamic vinegar  for  holiday cooking. Along with the others who came early, under some rain shower and nippy temperatures, we filled up the outdoor tent setting.
House of Balsamic, in partnership with Roger's Garden, had invited their resident chef -  Gabriele Bertaccini, to give us a better understanding of an ingredient that can make such a big difference in the taste profile of a dish. 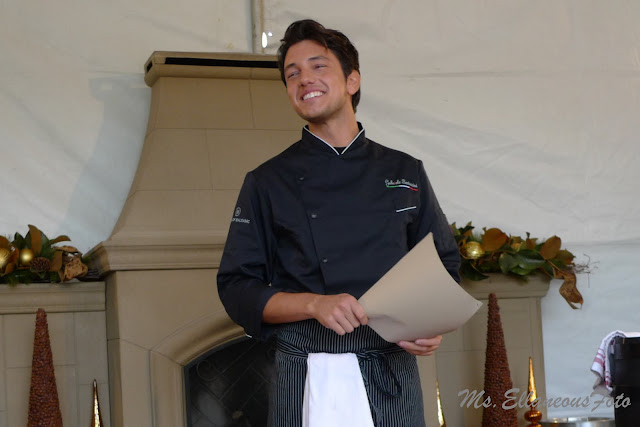 When it was showtime, Chef Gabriele Bertaccini introduced himself. He is Italian and he is very passionate about food. After pursuing his studies in the culinary arts at the Professionale Buontalenti per Servizi Alberghieri, he specialized in Tuscan cooking. His cooking style is characterized by the use of fresh and tasty ingredients by means of simple cooking technics.
After working in some regional restaurants, he took off for foreign lands to hone his skills further. He has traveled, lived, and worked in Paris, Munich, and back to Florence, and then, somehow,  he ended up in the U.S. He is the executive chef and owner of ilTocco, a private boutique-dinner-catering service for private functions and private events he organizes - Culinary Mischief. He shuttles back and forth between Arizona and California, and of course goes back to Europe to be refreshed, back in his roots. 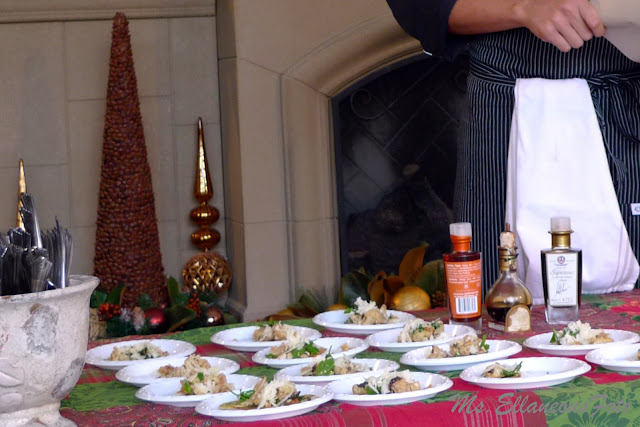 The stars of the show came in small bottles, in different flavors, with different ages. But the main star was the Aceto Balsamico Tradizionale di Modena (Traditional Balsamic Vinegar from Modena). 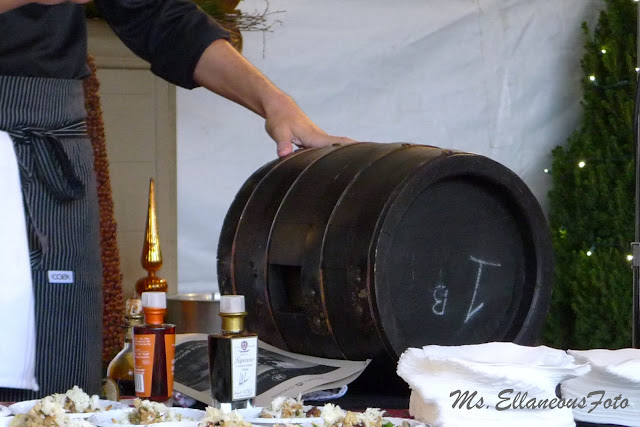 Chef Gabriele explained the process of making balsamic vinegar.
Quite different from the Balsamic Vinegar from Modena that most of us use to make our salad dressings, dips, and marinades, Aceto Balsamico Tradizionale di Modena (Traditional Balsamic Vinegar from Modena) is made from two red  and one white Trebbiano and Lambrusco grape varieties. From the freshly harvested and pressed grapes, a must is made as it is cooked down by about 30% . A thick syrup is formed. Then, it is fermented in a slow aging process, while moving in storage through the next twelve years, in a series of seven wooden casks that graduate in size, made from a variety of wood like acacia, cherry, oak, mulberry, chestnut, and ash. This allows for the must to evaporate more. The resulting product, over the years, is a thick syrup called mosto cotto - dark brown in color with an intense flavor profile that is both sweet and sour, with a hint of flavor from the cask materials. Twelve years is the minimum time for the production of traditional balsamic vinegar.
At the end of the aging period - be that 12, 18, 25 years, or even a 100 years, a small amount is "taken from the smallest cask and each cask is then topped up with the contents of the preceding cask. Freshly reduced cooked must is added to the largest cask and in every subsequent year the drawing and the topping up process is repeated." This process is called solera or in perpetuum - where in "the product is distributed from the oldest cask and then refilled from the next oldest vintage cask." With the arrival of the new fresh harvest of grapes, a new production cycle begins."
With the same process, other fruits like apples and oranges are also being used now to make other balsamic vinegars. This makes for an efficient production time for the facilities to continue making vinegar, all year round, with the seasonal, fruit raw materials that are available. 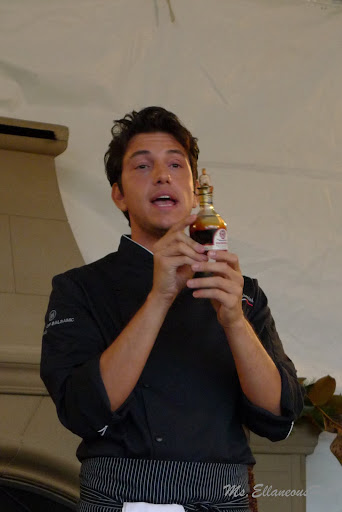 The balsamic name comes from the root word "balsamum," which was an energizer, a curative agent that was once prescribed and bought from the apothecary. The shape of the bottle, as it is today, comes from the historic usage of the product, when they used to be stored and packaged by the pharmacists in a chemist's flask. 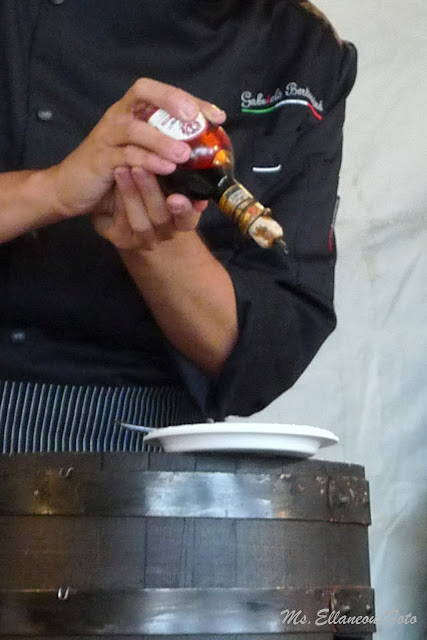 Chef Gabriele showed us how thick and viscous the syrup was, that it took awhile before it started to pour.
There was food prepared for the attendants to taste, to showcase how the addition of the different types of  balsamic vinegar could further enhance the taste of a dish, bringing it up by another notch. We were given printed recipes of Chef Gabriele. He apologized, however, that because he could not find good quality ingredients at the farmers' market, he decided to use other ingredients, thereby modifying the menu for the morning. 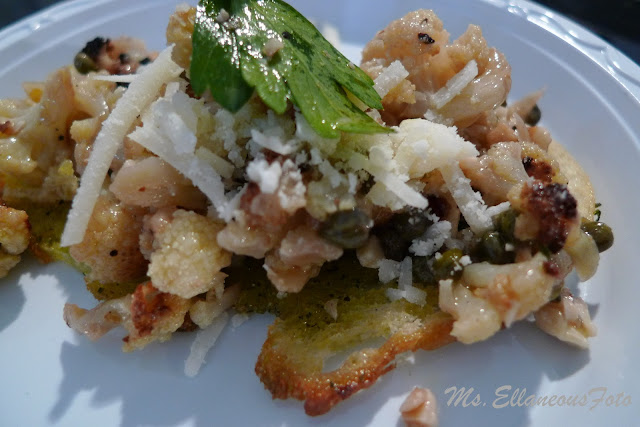 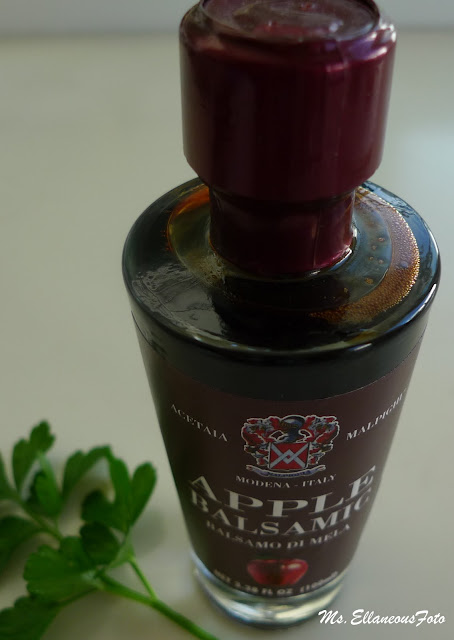 By the time I went to the Gourmet Food section at Roger's Garden, the Orange Balsamic was sold out. Since I was impatient and did not want to wait, I bought the Apple Balsamic which we had taste tested earlier. This is what I used in this recipe. 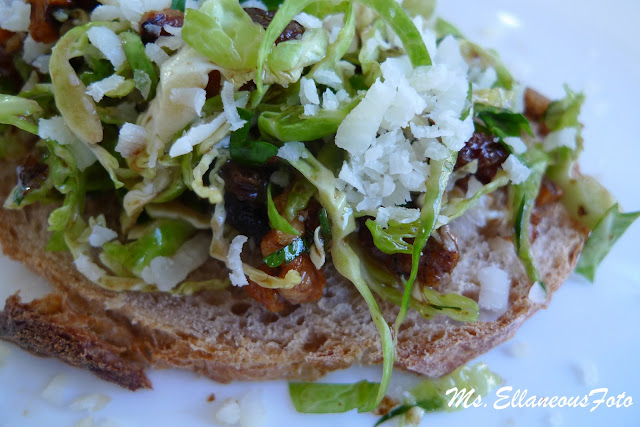 INGREDIENTS:
1/2 lb Brussels sprouts, sliced finely as for a cole slaw salad
1/3 c coarsely chopped walnuts, lightly toasted
1/3 c raisins
A sprig of parsley, finely sliced to taste
1 tbsp Pecorino Romano, shaved
A slice of uncured bacon, optional
Artisanal whole wheat bread - sliced thinly, and toasted for 2 minutes
Parsley for garnishing
In a bowl, combine all the ingredients, except the toasted bread slices, shaved pecorino and the parsley for garnishing.
VINAIGRETTE:
2 tsp. honey
1 tbsp. Apple Balsamic
1 tsp. fresh lemon juice
Lemon zest
1/2 tsp. Dijon mustard
Half a clove of garlic, finely chopped
3 tbsp. Extra Virgin Olive Oil (EVOO)
Freshly ground black pepper, to season
In a small mixing bowl, whisk all the ingredients together, except for the EVOO. Then, slowly add in the EVOO until it is all incorporated. Add the vinaigrette to the bowl of the other ingredients and toss. Spoon over toasted slices of bread and sprinkle Pecorino Romano cheese over it. Garnish with a parsley leaf.
* This is a saltless food preparation. The Pecorino Romano cheese is salty enough. I made this without the bacon, as I normally prepare vegetarian meals at home. But if you invite me, I will eat anything.
So simple, healthy, and so tasty. It's all about the imaginative combination of ingredients. That Apple Balsamic gave my vinaigrette a fruity punch. Now, I can eat Brussel sprouts again. With this recipe, I have come to realize that I prefer to eat it raw than cooked. We ran out of crostini so we ate the rest as a salad.
By the way, we found out that the best way to cut bread for crostini is to use the meat slicer for cold cuts. Well, I had to manage using my bread knife. 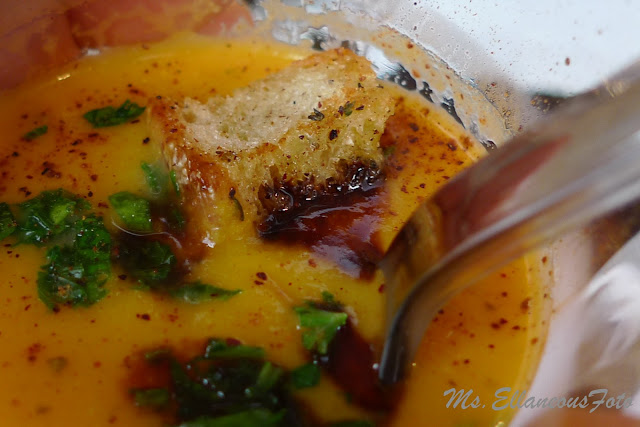 Butternut Squash Soup
This was a replacement for the Goat Cheese and Fennel Soup. Add a few drops of Traditional Balsamic Vinegar to your squash soup recipe and it gives it a hint of a sweet and sour flavor, that makes it molto delizioso. 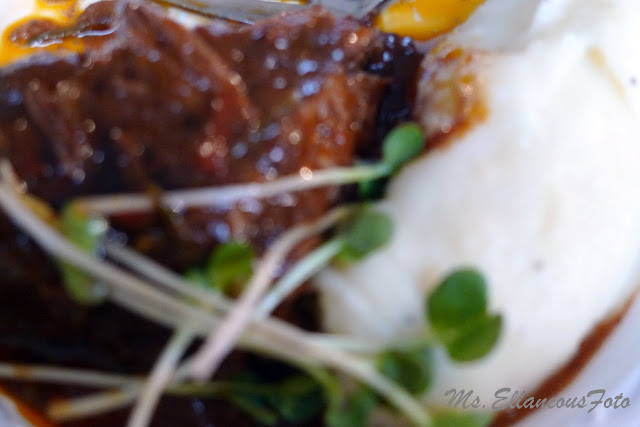 Braised Short Ribs with Mash Potato
This was like home cooking, a comfort food which we all loved. It was cooked with herbs and  Barolo wine and baked for two hours after the initial preparations. It was served side by side with the mash potato that was made with mascarpone, butter, cream, milk, Parmigiano Reggiano, then Saba Balsamico was drizzled on top. Saba is another grape variety.
One thing I learned is we are NOT suppose to cook with balsamic vinegar, or we will end up with sugar. The Traditional Balsamic Vinegar is quite pricey. A 100 ml bottle sells from $90.00 to $500.00, depending on the age. To drizzle it on your cooked food is the best way to get the most out of this gastronomic ingredient.
I took out my small bottle of balsamic vinegar from Modena being marketed under a store label. It was interesting to note that it was also in a small bottle and the inscription read "Gold Quality Balsamic Vinegar of Modena. Premium Aged." I asked myself what all these meant? This product was aged for 12 months and not 12 years.  The product characteristics are different.
As we say, we get what we pay for. The next time I buy balsamic vinegar,  I will look for the designation Dominazione di Origine Protetta and the European Union's Protected Designation of Origin. This will authenticate the product as the real thing or not.
Here's a short cut to your search for the authentic balsamic product. A vist to House of Balsamic can facilitate that. Buon Appetito!
Posted by yolanda at 19:05 4 comments: