Somewhere in the south of France (Alpes Maritimes) is a place that was once the most visited pilgrimage site before Lourdes. There is an Italian baroque-style church that dates back to 1656, in La Trinite. It is only minutes away from Eze, Villefranche and La Turbie. 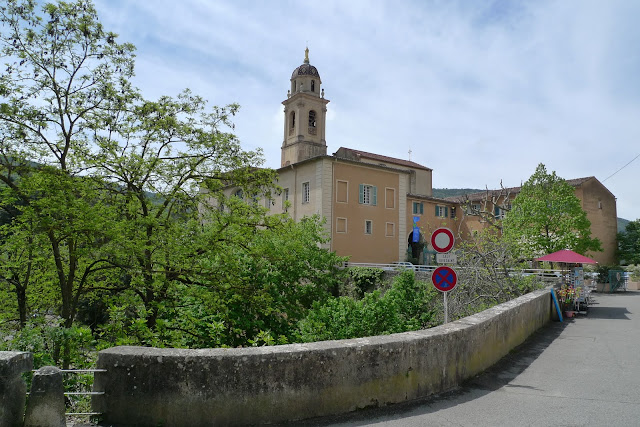 This church is known as the Sanctuaire de Notre Dame de Laghet. "Laghet" means a small waterhole, from the word " aiguet." It is a hamlet in the region of La Trinite. The existence of this village was first mentioned in a historical chart in the 11th century. In the 12th century, Laghet was a property of the fief of Eze. In medieval feudalism, the fief was inheritable land or revenue producing land that was "granted by a lord to a vassal" for his loyal services.
There was a little chapel dedicated to the Virgin Mary which became a pilgrimage site in the 15th century. Located in the middle of nowhere and constantly subjected to harsh elements, it fell into ruins. Eventually, the villagers moved out and only the shepherds who were left brought their flock there.
In 1628, Fr. Jacques Fighiera found the old chapel and decided to honor God and the Virgin Mary by fixing up the chapel and getting it back in shape at his own expense. With him as the pastor, he invited the population  from neighboring towns to come. The people from Villefranche, who used to come to this chapel, were encouraged to be prayerful by Fr. Fighiera. Soon, they were reporting miraculous answers to their prayers. As the news spread, people from the corners of Provence and Liguria began to come.
In 1674 a convent was built by a community of Discalced Carmelites from Turin. They remained there up to 1903. The Sanctuary of Laghet was bought in 1907 by a certain Canon Dalberra. 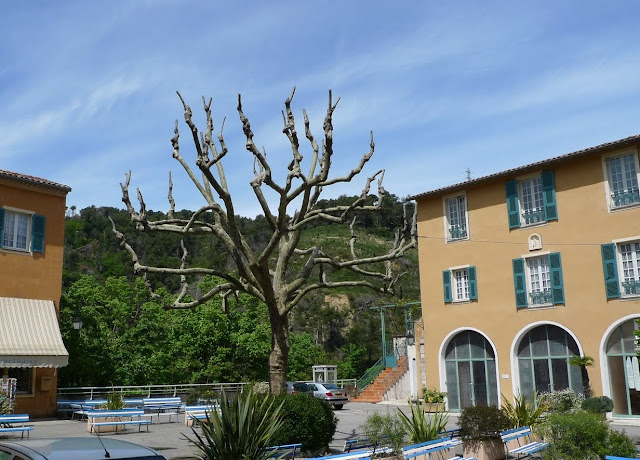 In 1930, it was transformed into a spiritual house - offering retreats to the faithful. Beginning in 1978, the Benedictines of the Sacred Heart of Montmartre have been providing for the spiritual needs and the hospitality for the pilgrims.
This is the present church that replaced the old chapel in the 17th century.

It is nestled in the forest in La Trinité, a town in the Alpes-Maritimes, Provence region in southeastern France. La Trinite used to be a part of the kingdom of Piedmont-Sardenia.  Being a part of Italy then, the Dukes of Savoy used to come here  from 1666 -1849, on  pilgrimages. La Trinite became French in 1860. 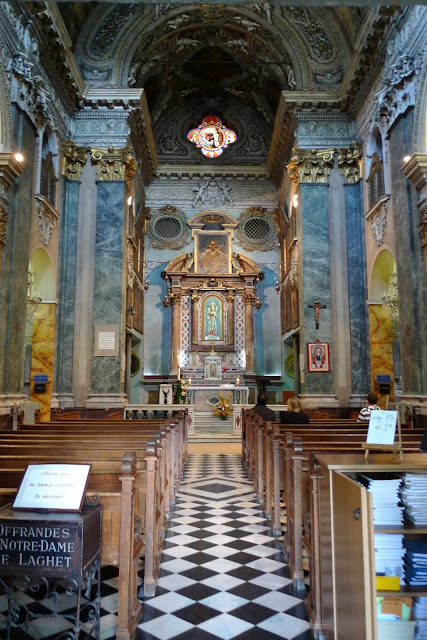 This Baroque-style church, with faux finishes, is still visited by pilgrims from all over the world. 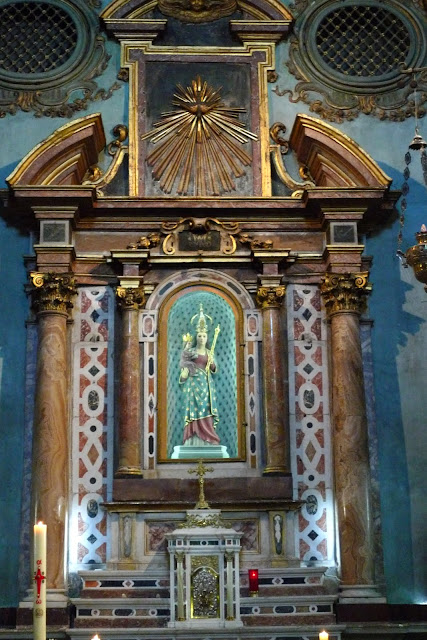 This miraculous statue of the Virgin is made of polychrome wood dating back to 1625. She has been called the Virgin of Wonders, and more popularly known now as Our lady of Laghet. Part of her wardrobe pieces were made by the Dukes of Savoy. This image has miraculously appeared in the rooms of the sick, in accident locations, and in the dreams of people who were praying for her intercession.
The old statue of the Virgin showed the ravages of time. Fr. Fighiera, who owned  another statue that was placed in a church in Eze, decided to donate his statue to the church in Laghet. In a procession, on June 24 1652, the White Penitents of Eze carried the statue from the church of Eze to the chapel in Laghet. It became known as Our Lady of Laghet. Every year, this event renews this devotion to our Lady, reenacting the procession of Our Lady from Eze to Laghet. 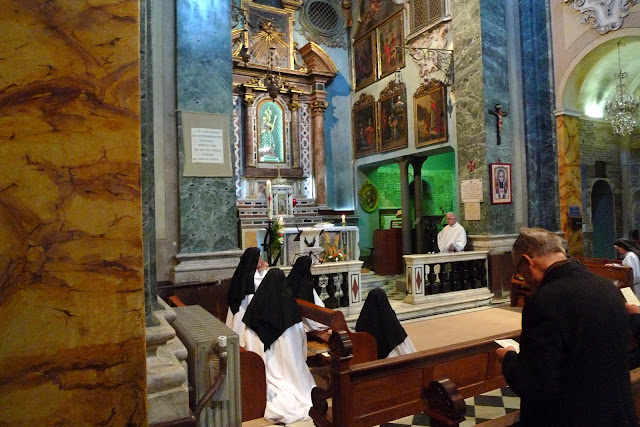 It's a little church. Attending mass here is a heavenly experience. The Benedictine nuns lead the singing at mass, with their sweet cherubic voices. On Sundays, masses - in the spring and summer seasons - are held under a tent, to accomodate the larger number of attendees. 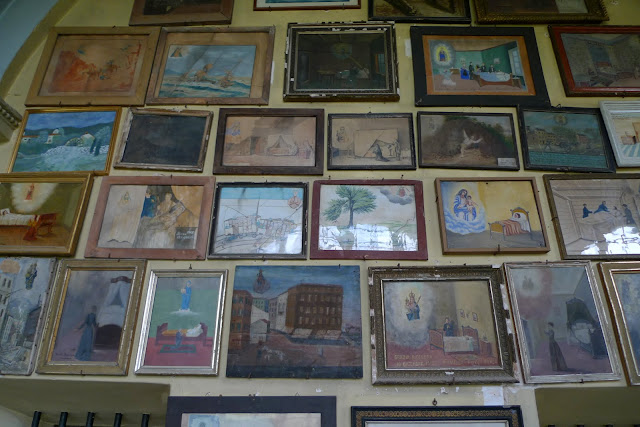 These ex-votos - "a painting or other artwork, usually nonprofessional, placed in a church as a token of thanks for blessings" depict the miracles.
With the many reported miracles, an investigation was undertaken to determine their veracity, by a commission of theologians with the assistance of a lawyer and a doctor. At this time, the statue was covered and the chapel was closed.  On December 20, 1653, The Bishop of Nice - Monsigñor de Palletis, confirmed the authenticity of the miracles. On April 25, 1654, the Bishop led the first official pilgrimage to Laghet. 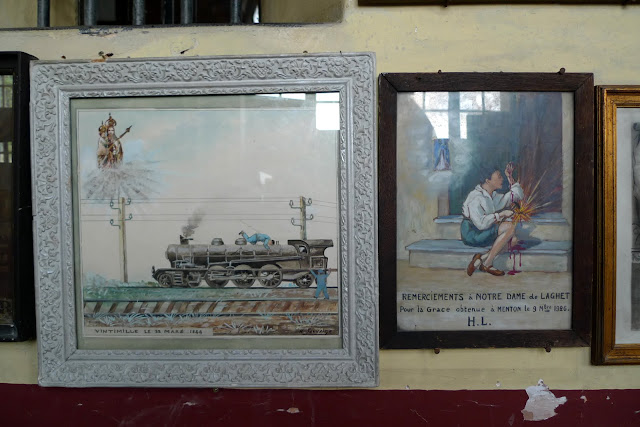 In this picture on the left - a water color drawing/painting - a man who fell off from a train was saved by our Lady of Laghet. In the picture to the right, the boy thanked the Virgin for healing his wounds from a firecracker accident. 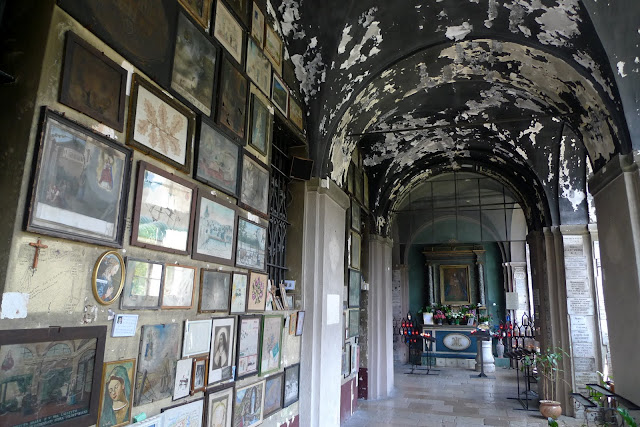 More of the testimonial artworks on the foyer - the ex-votos are considered historial monuments. 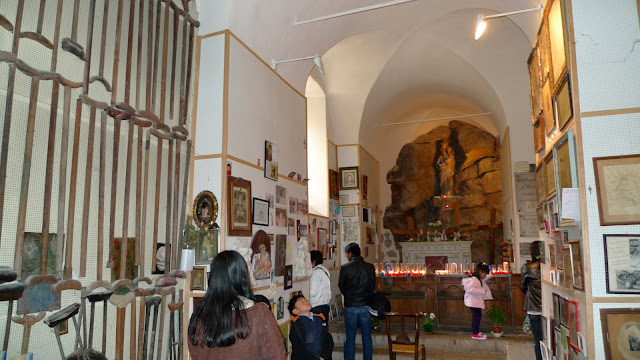 In the basement is a grotto and more ex-votos are hanging on the wall, as well as the crutches from people who no longer needed them after they were miraculously healed. 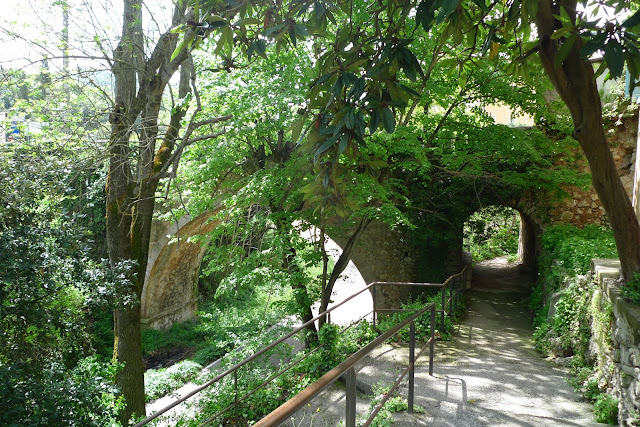 On Good Friday, with weather permitting, the Way of the Cross is held in the middle of the forest, all the way to the lowest point and up around, and back to the church.
La Trinite is situated between Nice and Monaco. Drop by for some prayer time when you go to the south of France. Miracles still happen, through the intercession of Our Lady.
A prayer in an old pamphlet published in 1753: "I am the mother of Mercy. Come to me you who weep and who are in pain. I will heal your wounds and I will dry your tears. Thanks, o Mary, thanks."
Shrine of Our Lady of Laghet
La Trinidad Laghet 06340 France
Tel. : 04.92.41.50.50
www.sanctuaire-laghet.cef.fr
Posted by yolanda at 05:06 No comments: