It's long lines of tour buses and tourists, especially at le Tour Eiffel (Eiffel Tower), which happens to be a tourist destination all-year round. 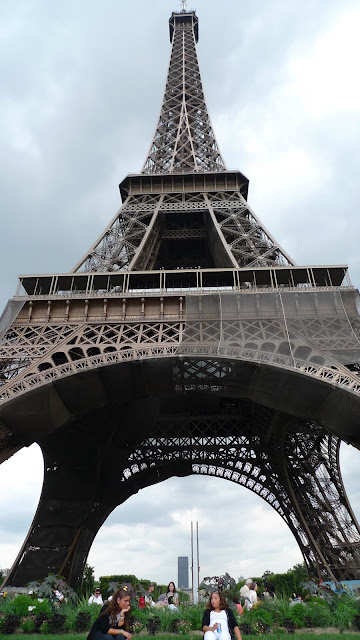 If you come to Paris, one of the things you will mostly likely want to see is the iconic French landmark, the Eiffel Tower. For my two friends who stopped over for 10 hours, this was foremost on their agenda.


The tower was put up for the Paris World Exhibition 1889, to celebrate the 100th anniversary of the French Revolution. It served no specific purpose but became more of a French landmark, then, for the Exhibition Universelle. After 112 years, it is one of the most recognizable French landmarks, which has been replicated in Las Vegas and in Tokyo, to some measure.


The design of this project has been attributed to Gustave Eiffel. Actually, starting in 1883, two French engineers - Maurice Koechlin and Émile Nougier, who had vast experiences in constructing wrought-iron bridges, came up with the design of a 1000 foot tower and submitted it to Eiffel. These two engineers were left to work on this project with the help of architect Stephan Sauvestre. 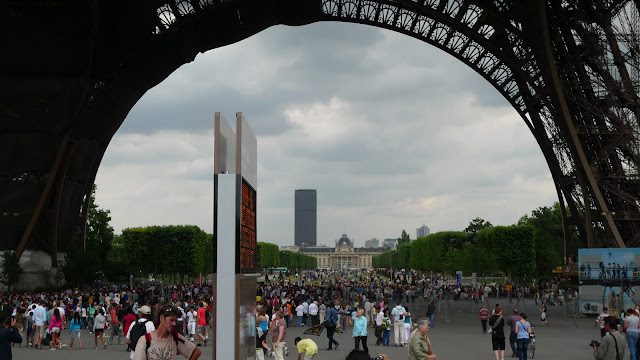 The lines are best to join early in the day, as they are much shorter. The tour groups have a separate line from the regular tourists.

If you want to avoid the queue, buy a Parisian Museum Pass which can be purchased online, at CDG airport,  in the museums, and in some metro stations. This is practical and it comes out  economical, too, when you plan to visit two to three museums or landmarks, each day.


Don't be a victim of a petty crime. With this large number of people, be alert and be secure with your belongings. Pickpocketing is rampant. Someone may bump into you or engage you to distract you while their partner in crime carts off something of yours, without you realizing it. In my case, I use a shoulder bag that's placed in front of me, with my cell phones, keys, and camera all tied up and attached to it. Dress up comfortably, without jewels,  so as not to attract too much attention. 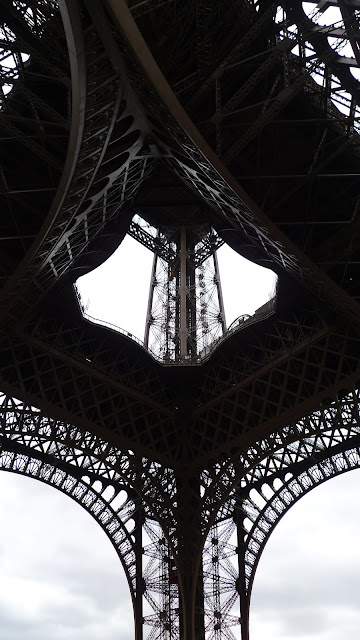 Just in case you don't get to visit the Eiffel Tower, come up with us and find out what it's like to go all the way to the top, vicariously. 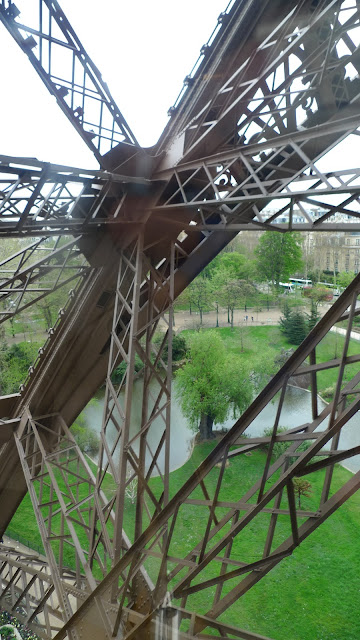 It's a relatively fast ascent. Inside the ascending  elevator, we started to see the surroundings in a couple of minutes, on our way to the middle level of the tower.  The different landmarks begin to show up. 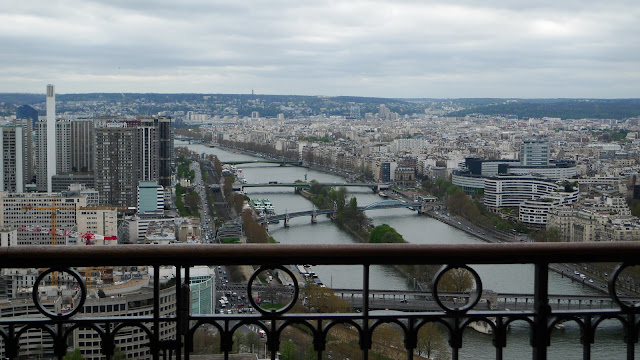 There is a change of elevators on the 2nd floor (middle level), somewhere around here. 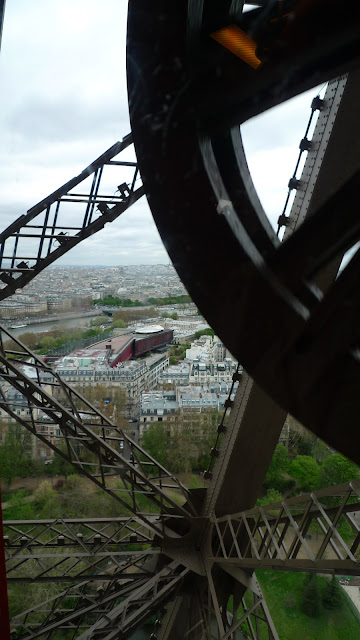 Back on the lift, we are heading to the last stop at the top. Taking a couple of steps up, you will be led to the deck to see all...well, almost all of Paris. Up here, you will possibly hear the ferocious wind and feel it slap against your face, ruin your hairdo, and feel really cold, as we did. Quickly, we went around 360° with our cameras taking pictures of what we saw that we liked to remember and to share with others. Here are some of my pictures: 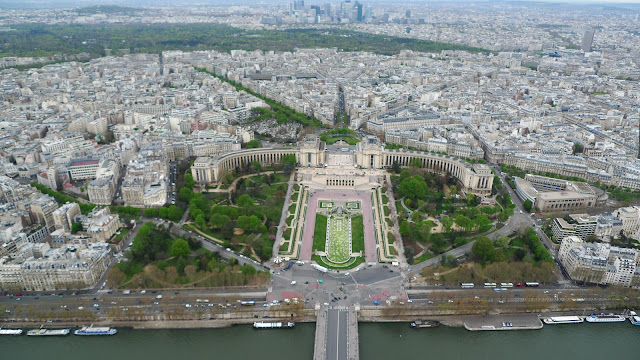 This is the Trocadero. 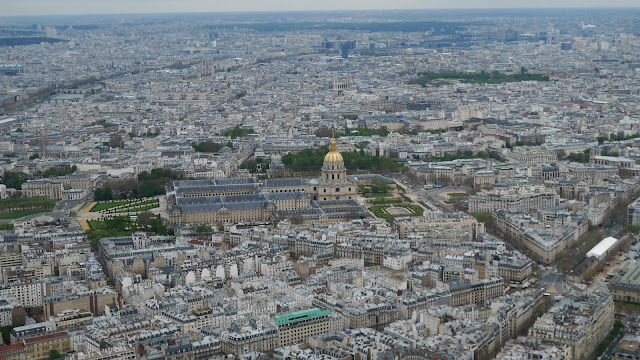 Les Invalides (gold dome of the church) where Napoleon is buried. 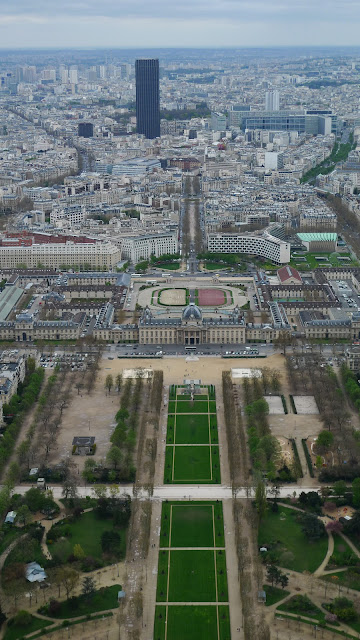 Montparnasse in the background, with the tallest building in the whole of  Paris. 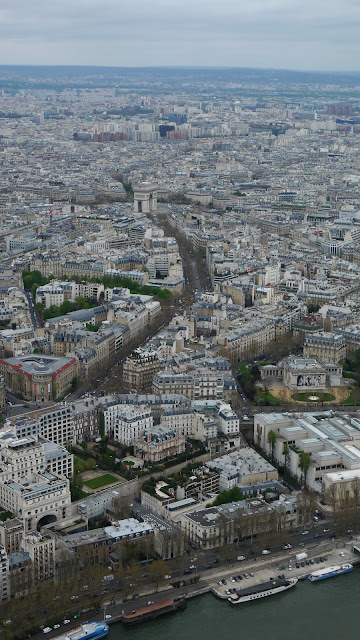 That familiar landmark is the Arc de Triomphe. From up here, you will see the streets and boulevards in their unique pizza-slice patterns. Notice how there are no perpendicular streets in Paris, as designed by Haussmann. 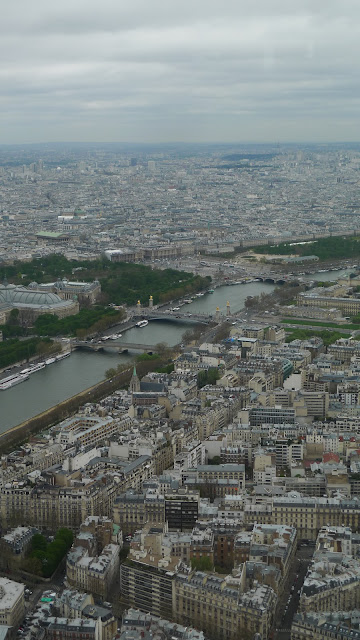 Next to and between the two bridges are the Grand Palais and the Petit Palais. Both were built for the Universal Exhibition in 1889. 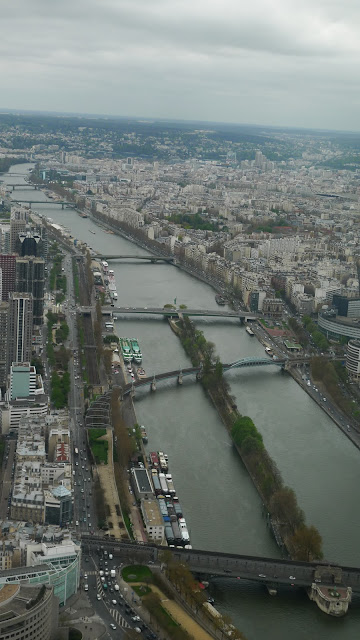 Back to the view of the Seine River - this will eventually become the Marne River. 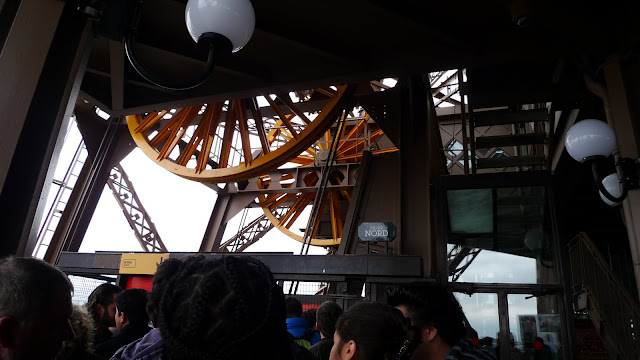 After about 15 minutes, we headed down. With only two elevators carrying people up and down, there was  a bit of a wait. 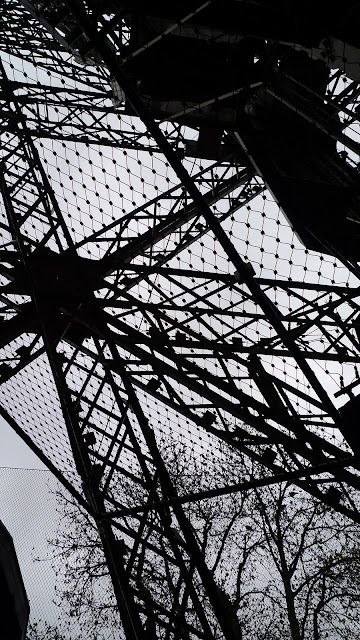 From the 1st floor to the base of the tower, there is a meshed wired wrapped around the structure. I can only imagine that it is to keep people from climbing up to do stunts, as they did in the earlier years, or, just simply keep those with devious intentions away. Those little squares are the lights that brighten up the dark night. 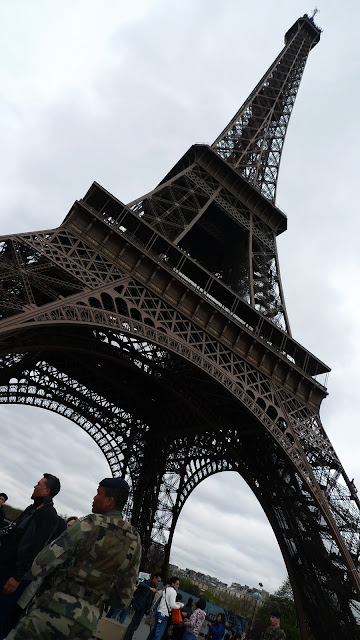 Once we got down, it was relaxing to linger around and promenade in the open space. 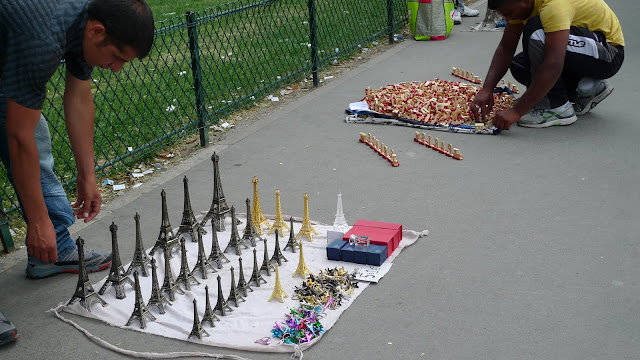 Souvenirs, anyone? You can bargain for a better deal if you are buying several things. 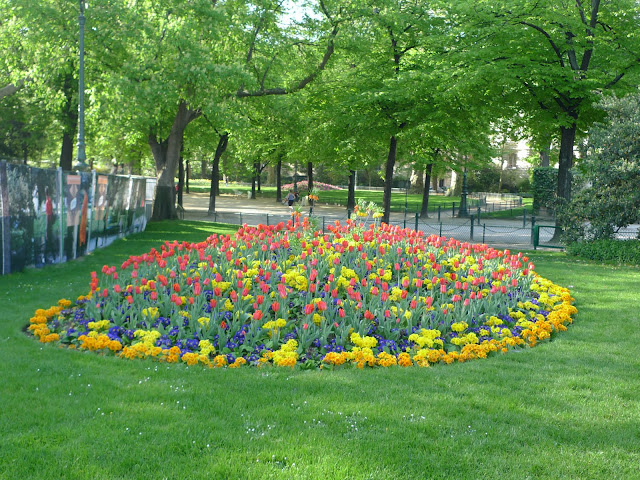 The lawns are manicured and brightened up with colorful flowers in bloom. 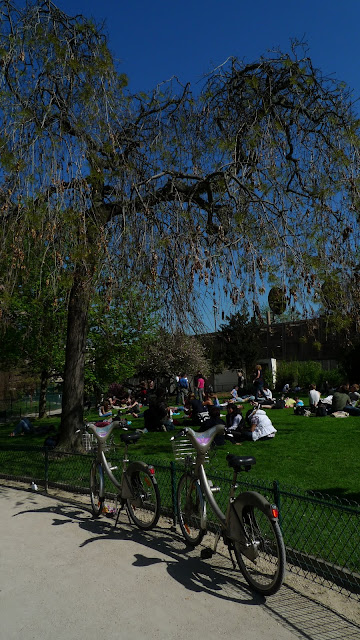 It's a favorite place for a picnic on a nice day. 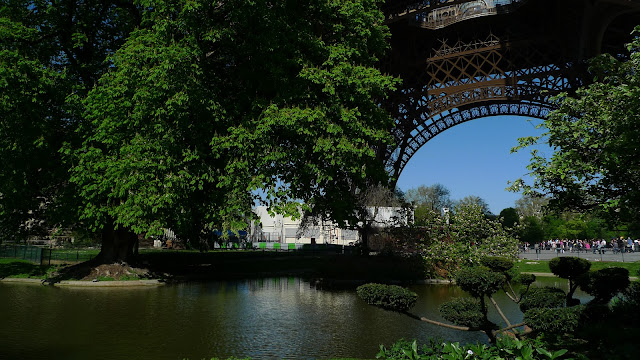 The scenic views with the water in the pond are refreshing. 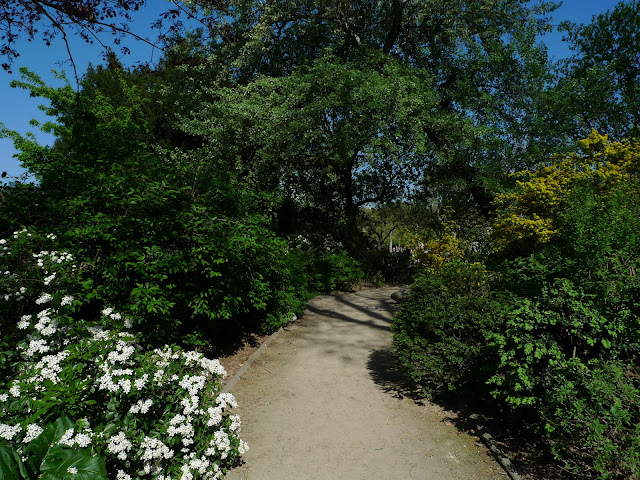 There are pathways to meander through... 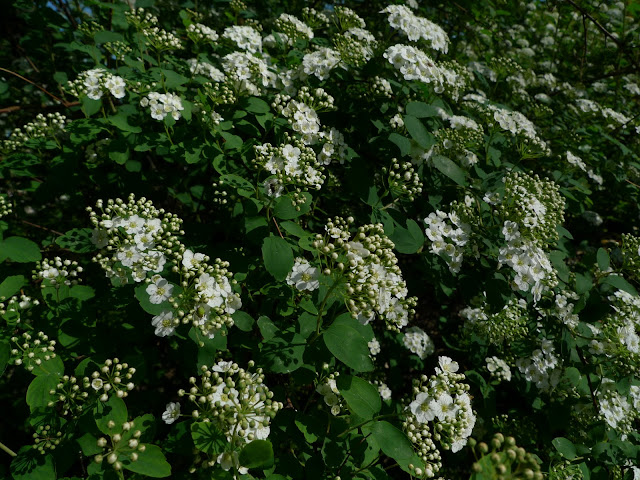 and all sorts of flowering plant species that beautify the garden. 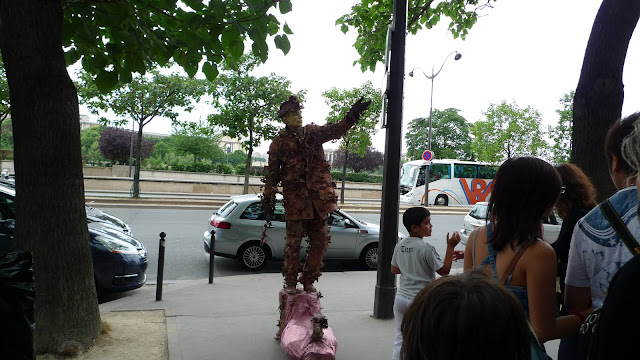 There is ongoing side-entertainment - here is a mime.  Sometimes, there are jugglers and musicians, too, performing. If you stop by to watch and listen, there is a hat or container to take your donations, to show your appreciation. 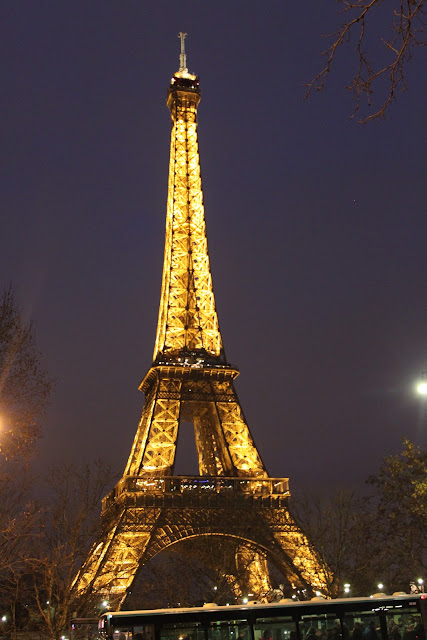 When nigh time falls, the tower lights up the city. 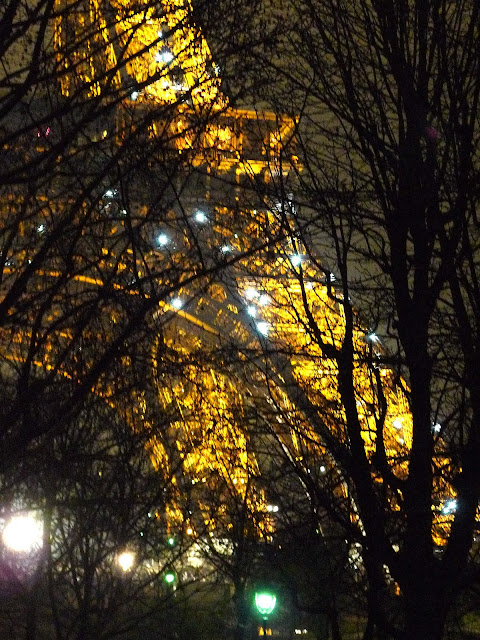 From 10:00 p.m., (on daylight-saving time schedule) the tower lights begin twinkling during the first 10 minutes of every hour. The tower can be seen from many areas of Paris and serves as a compass, just like the north star. Charles Lindbergh, in his trans Atlantic flight from New York to Paris on May 20-21, 1927, was guided by the tower as he flew towards Paris, and the Spirit of St. Louis landed at Le Bourget Airport.
The tower has been used as the site for special effects during holiday celebrations.  A fireworks show to celebrate Bastille Day (anniversary of the French Revolution) always draws a big crowd for a live audience. There are other occasions that the Eiffel Tower is used to announce a special event or other celebrations: 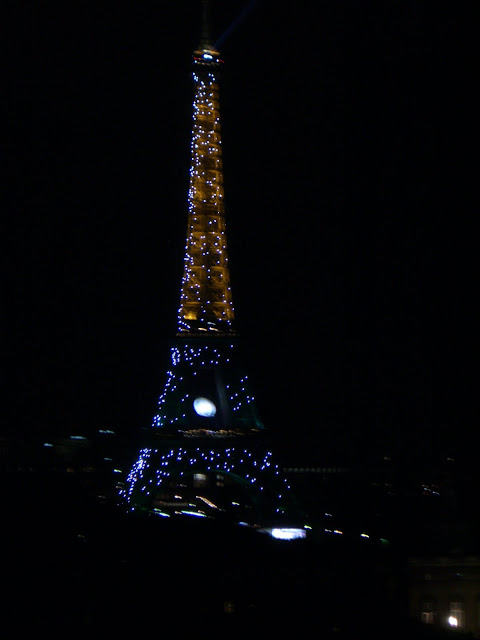 During the Rugby World Cup in 2007 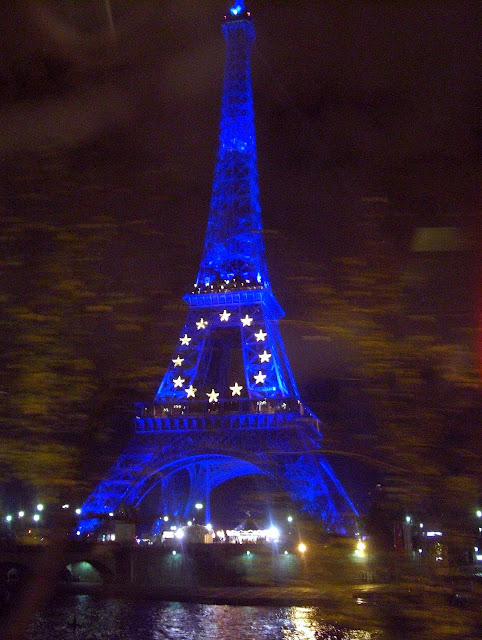 To mark the six-month French presidency of the European Union in July 2008, for two months. 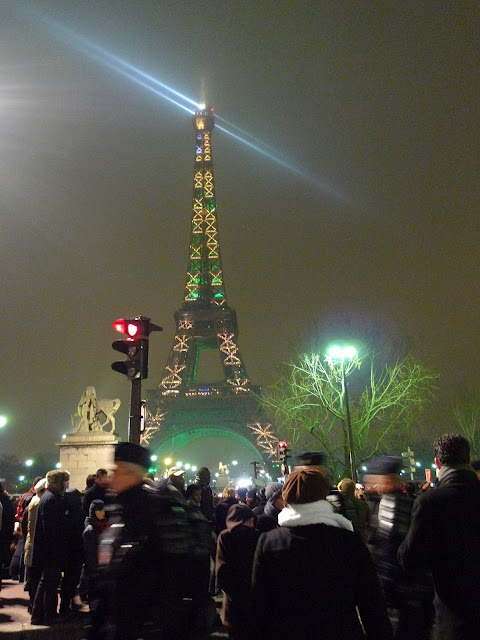 New Year's Eve celebration 2009
If you want a real workout, climb the steps to the first level, or come down via the staircases. Be sure to have your camera to take that memorable shot up at the tower, or the view. Now that you have had a birds' eye view of Paris, you can decide where to visit next. Be alert and be safe wherever you go.
Posted by yolanda at 17:45 7 comments: