The morning was over and we had conquered our fear of heights. Now, we were going on a sightseeing tour of the island. There was nothing to fear about.  We shall find out!
The East End Tour began at the Tour Plaza where we boarded our open, canopy-covered vehicle, good for 12 people. The open hummer that we were expecting to ride was out on maintenance service. 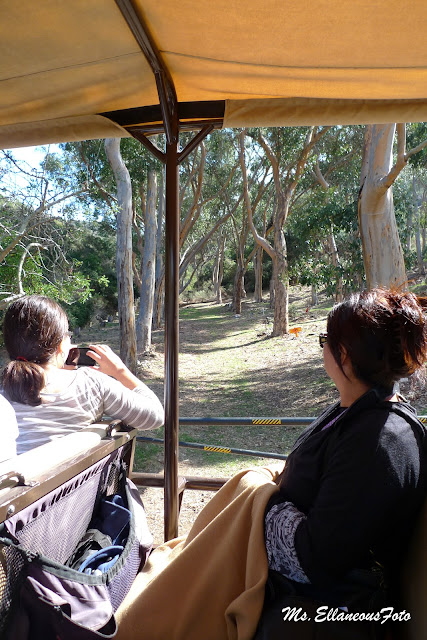 This type of vehicle is customized, to make sight seeing and taking pictures easy for us, tourists. First, we were driving on asphalted road, then on pebbled, dirt road. The higher we drove up, the colder it became. It was an icy chill that we were feeling to the bone. The blankets provided on the seat pockets helped, somewhat.
We were on our way and Christine, our driver and tour guide, had interesting bits of information to share with us about Catalina Island. 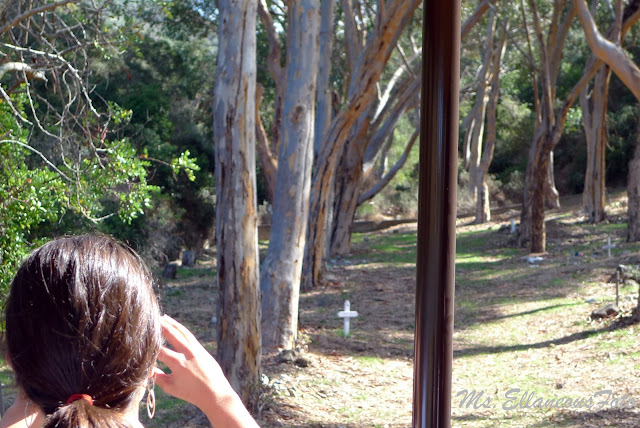 This grove was cleaned up to reveal the cemetery, after it was discovered that there were people living in the premises. A good number of people were buried here between 1904 and 1972. 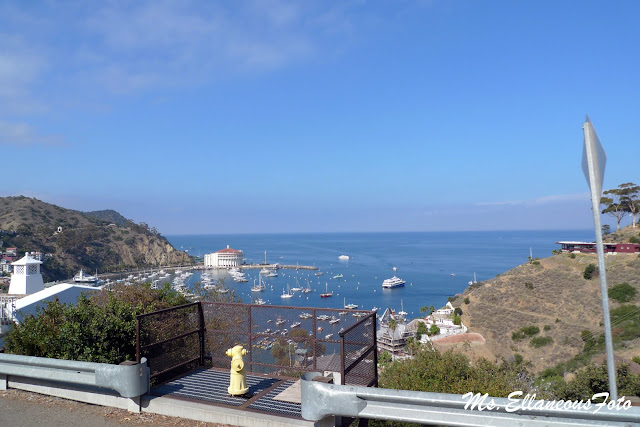 The next turn brought us to the vista point to see some of the most spectacular views of the town and Avalon Bay. 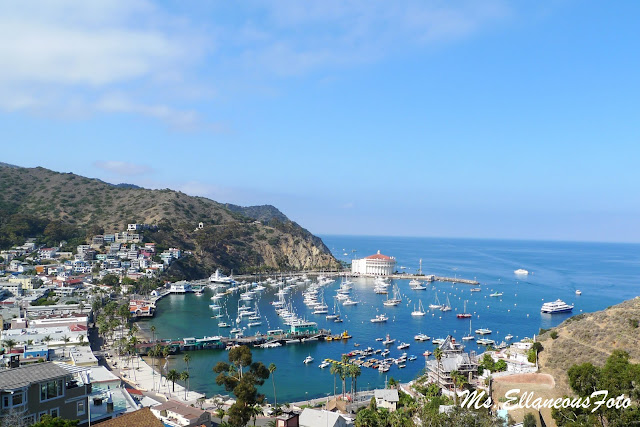 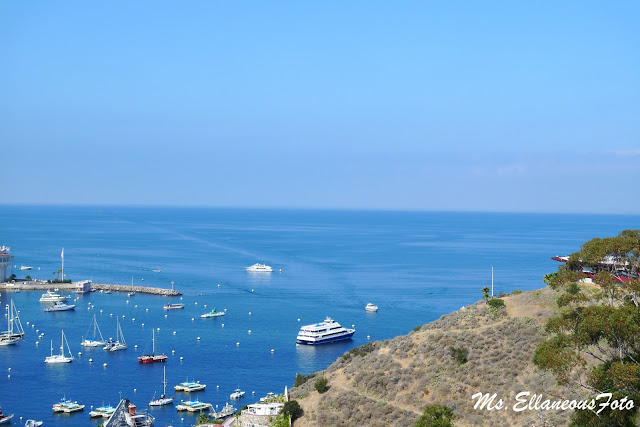 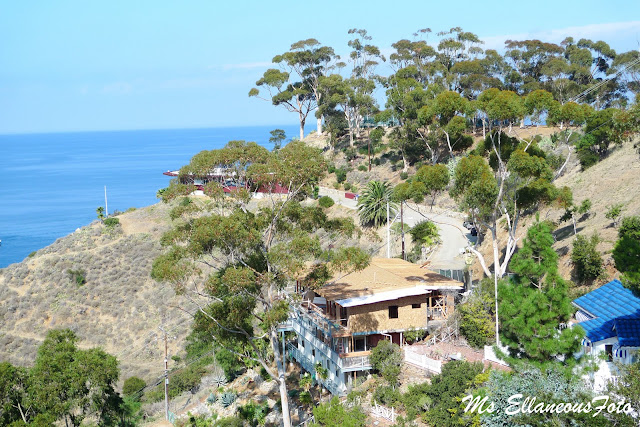 This was the breathtaking view from the Wrigley mansion, where William Wrigley and his family had lived.
Before the Wrigleys came to Avalon, there were a couple of  pre-settlers, European settlers, and developers who had settled on the island. In the 1830s, the native population seemed to have either died or migrated.


California became a part of Mexico when she was ceded over to Mexico, when Mexico won her fight for independence from Spain. In the 1840s, Pio Pico - the Mexican governor gave Catalina Island as a grant to a certain Don Jose Cornuvias of Santa Barbara. It became Camp Santa Catalina Island, during the Civil war. In the 1860s, James Lick took over control of the island for a quarter of a century. In 1887, George Shatto from Grand Rapids, Michigan purchased the island for $200,000.00 from Mr. Lick.


George Shatto developed a part of the island that is now known as Avalon. His sister Etta Whitney came up with the name which means "bright gem of the ocean." Shatto worked on making this a vacation destination, bought a steamship to ferry the passengers from the mainland to Avalon and back. Unfortunately, after a couple of years, the business faltered and the land went back to the Lick estate, as he defaulted on his loan.
In 1891, another family got into the picture. The children of Phineas Banning bought the island and organized the Santa Catalina Island Company to develop the island as a resort. However, their efforts were thwarted by a fire that destroyed much of the developed areas of Avalon. With several factors and World War I going against their plans, they started to sell shares of the island in 1919. And next came the Wrigley family. 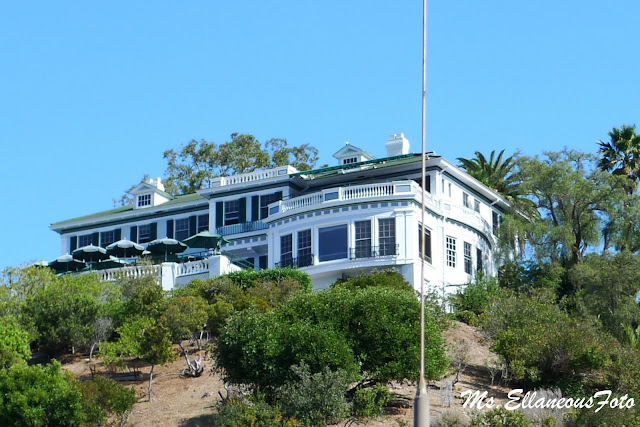 The Wrigley Mansion, where the Wrigleys had entertained some famous guests.
This was donated to the University of Southern California in 1970 to be used as a conference center. In 1985, it was turned into The Inn on Mt. Ada.


William Wrigley, Jr. (1861 - 1932) made it on his own after several attempts, after working for his father selling soap. He developed his own marketing strategy by always selling something with something as a give away. At 29, he moved his whole family to Chicago to start his own business with his cousin, after securing a loan from his uncle for $5,000.00. With baking powder as the giveaway for the soap, he realized that it was more desired by the customers rather than the soap. He, then, concentrated his efforts on selling baking powder with chewing gum as the giveaway. You guessed it. The chewing gum became the reason as to why the baking powder was selling. After grasping the taste of the people for the gummy products, he  concentrated his efforts at selling gums.
Inspite of the competition, he was very successful after launching two product names - Lotta Gum and Vassar. He discovered the wonderful consequences of advertising and the giving away of premium gifts, that soon he produced a premium  catalogue for people to choose their gifts from. His advertising motto was "Tell them quick and tell them often."
It was in 1893 when his chewing gum business shot to fame with the introduction of "Juicy Fruit" and "Spearmint Gum." Although the origins of gum making was attributed to New Yorker, Thomas Adams, who had introduced "Chicle" in the 1860s, the title of "Father of Chewing Gum" went to Wrigley. He became the biggest gum company. He went international, opening gum plants abroad and selling his products in 30 languages.
With his profits of into the millions, he bought the Chicago Cubs - at first, buying some shares in 1919 and then he became its majority stockholder in 1921. He was an avid baseball fan and was always watching the hometown games. He also bought the Cub Park which later became Wrigley Field, the Los Angeles Baseball Club, and a team in Reading, Pennsylvania.
At the same time, he invested in the west, buying Catalina Island off of the California coast, and made it into a family retreat. He turned it into a resort, developing the island - making great improvements in the provision of public utilities, commuter transportation, lodging for visitors, bringing in fauna and flora, and constructing a Casino that was not a casino as you would expect it to be.
He also continued his investments in Chicago, pumping money for the construction of the Wrigley building that was to be the headquarters of his gum company, as well as int Arizona when he bought a winter resort - the Arizona Biltmore. He had accomplished much while spousing a simple philosophy of "To be always pleasant, always patient, and never argue." He repeatedly told his son that they had a "five-cent business, and nobody in the company can ever afford to forget it."
William Wrigley, Jr. died at the age of 71. His son, Philip, took over the reigns of the SCIC. 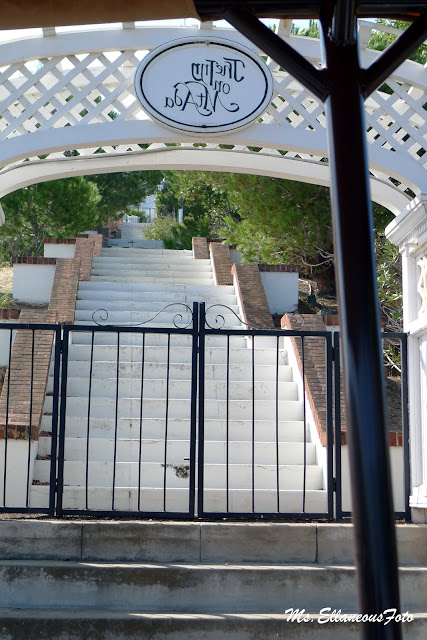 A side gate with hundreds of steps leading up to the house
The Chicago Cub team used to come to the island for their summer training. They were said to have ran up and down these steps to build their stamina. 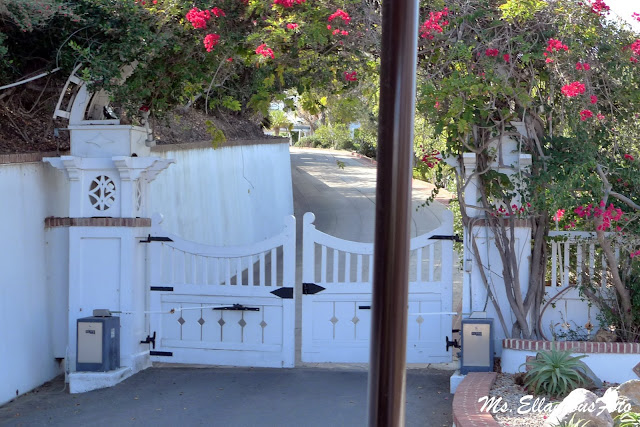 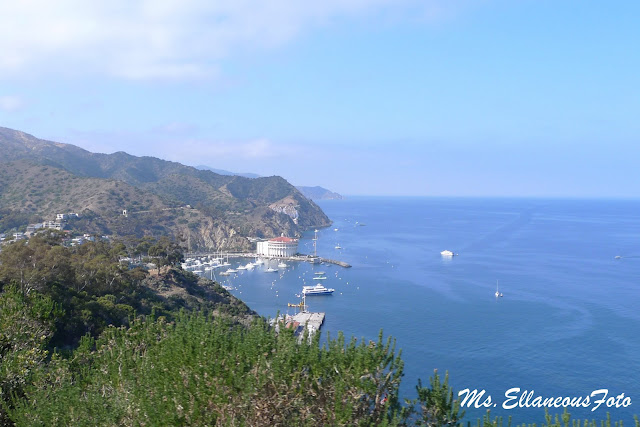 A side view of the bay and the round-shaped Casino Building , which has been the focal point for entertainment and culture since it openend in 1929. 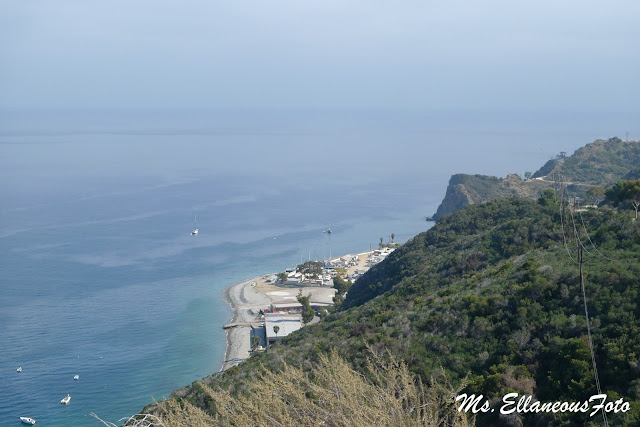 A view of another town on the island - Lovers Cove 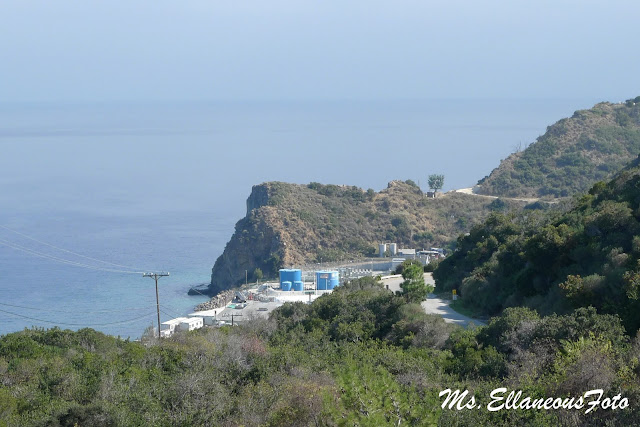 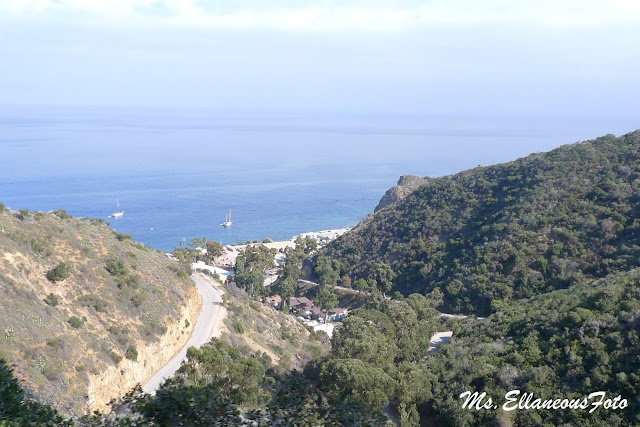 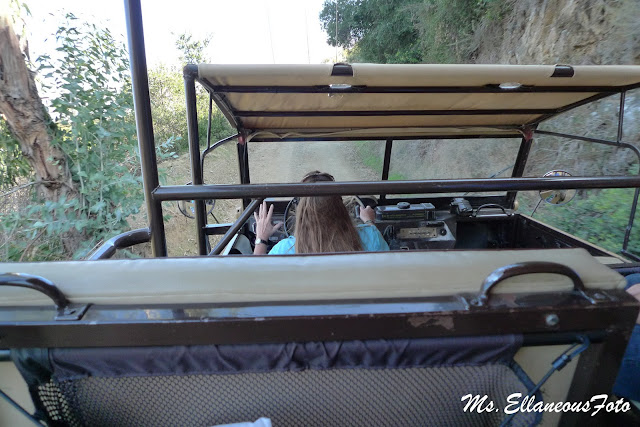 Our very able driver, Christine, maneuvered in and around the mountain dirt road with such precision or... 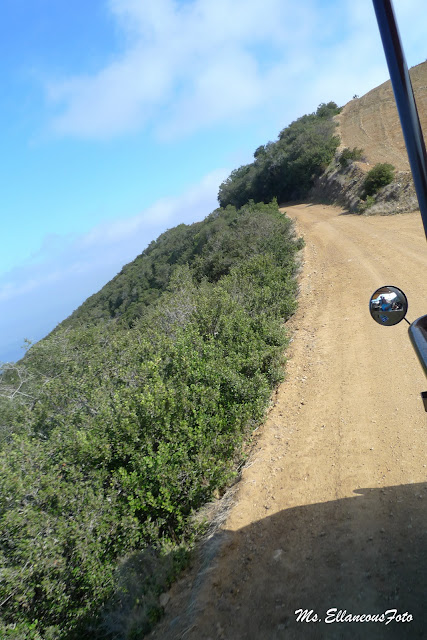 we would have gone down fast, off the roadside! Several of us had focused on looking straight ahead when our fear of heights got triggered, as we looked down the canyons. 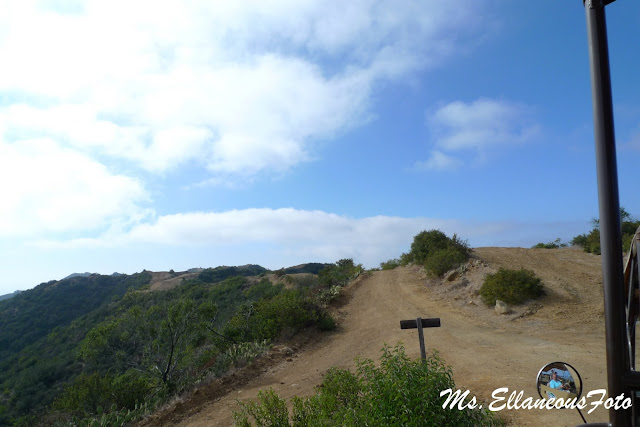 We made it to almost the top of the island, close to 2,000 above sea level. I had to sort of stand up during the ride, with my seat belts on, to protect my lower back condition from being jarred. Some parts of the ride were violently bouncing us. 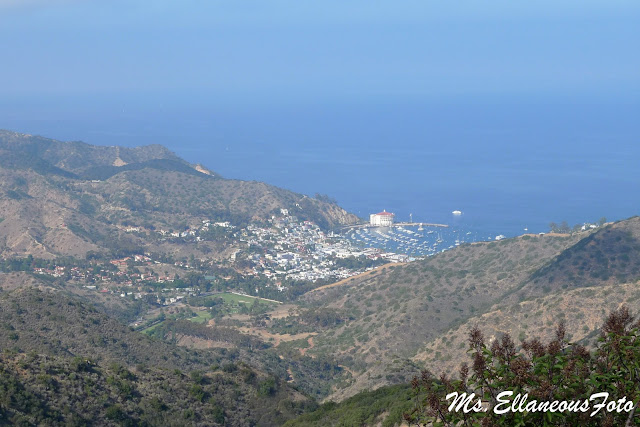 After that rough ride to the top, it sure felt it was worth it. From here, we were able to see the town of Avalon, the Pacific Ocean, a panoramic view, and felt the warmth of the sun. We also saw some hikers along the way - how gutsy of them, I thought. 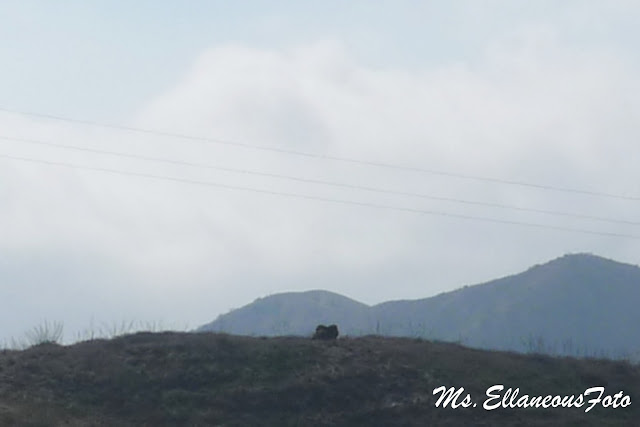 Somewhere up there, we saw these two bisons.
The bison herd is not local to Catalina Island. It was when a silent movie was being filmed in the island that a herd was brought over. When the filming was over, and the Zane Grey production company was packing up, 14 buffalos refused to board the boat, so they got left behind and multiplied. In the course of time, they got too many and overpopulated the island, causing damage to the eco system. Today, the herd is kept to a maximum number of 150 to 200. There is a program for the females that keeps them from overpopulating the island.


The conservation and preservation of the wildlife in the island is now under the supervision of the Catalina Island Conservancy, a nonprofit organization. The children of William and Ada Wrigley - Philip and Dorothy, had donated 42,135 acres of the island and 48 miles of the coastline to the conservancy in 1975. A balance between the recreational uses of the island and keeping nature in check is being worked at. This gives the assurance that the island's natural beauty and charm can be enjoyed for generations to come.
From here, we were back on paved roads. Heading down was a more relaxed ride. 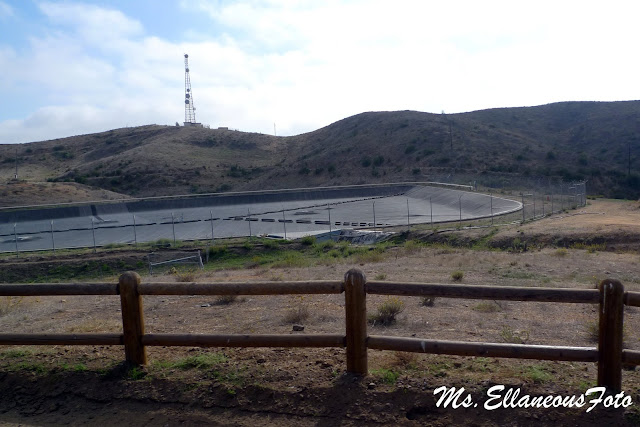 The water reservoir with a protective cover to keep the animals and other things from getting into the water. 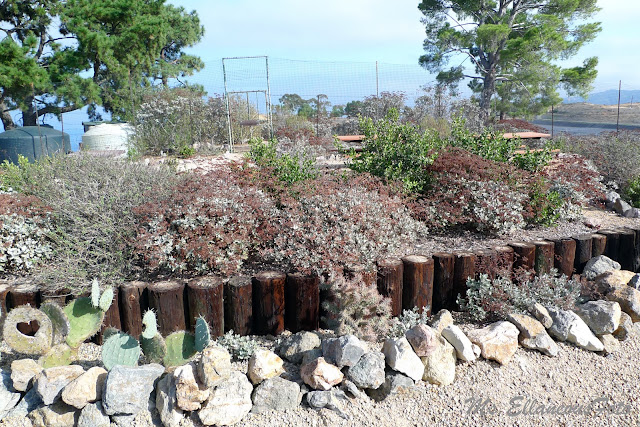 Called the Rose Garden, after the person who tends it, there is no rose plant in this garden. 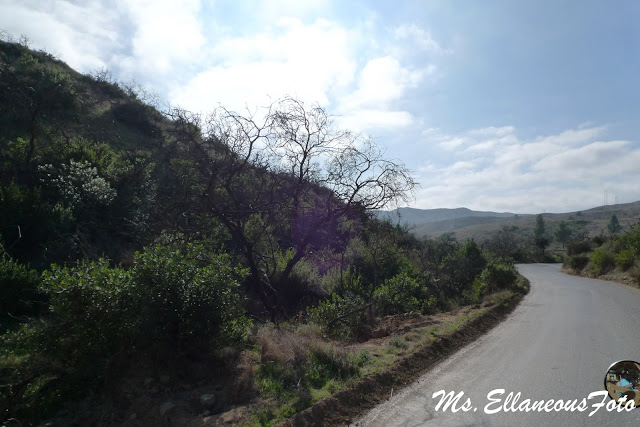 Traces of last May's fire, which started as a brush fire behind the yacht club, leave a tell tale sign of  bare, charred branches. Some 30 acres were scorched to the ground. 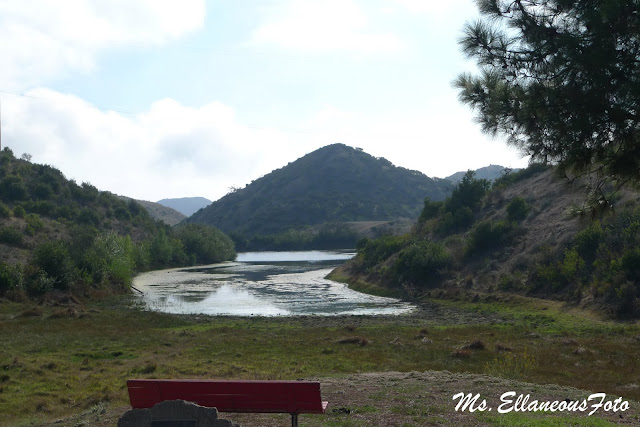 A water basin for catching rainfall 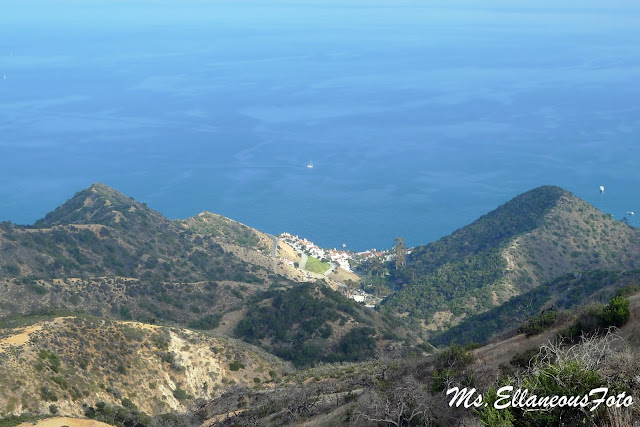 This is a view I captured with a random click. I had my camera aimed at all times. 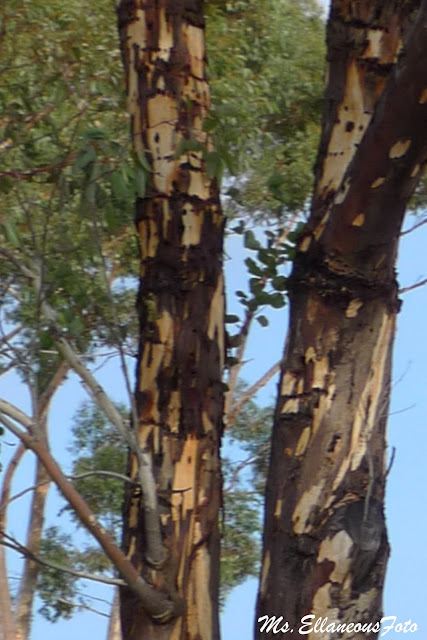 The woodpeckers have made storage holes on the tree trunks - note the black dots in line formation. 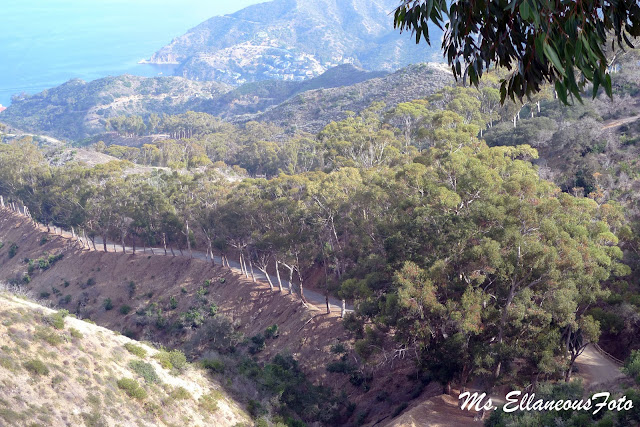 Part of the winding road was lined with eucalyptus trees. They were originally imported from Australia in 1941. 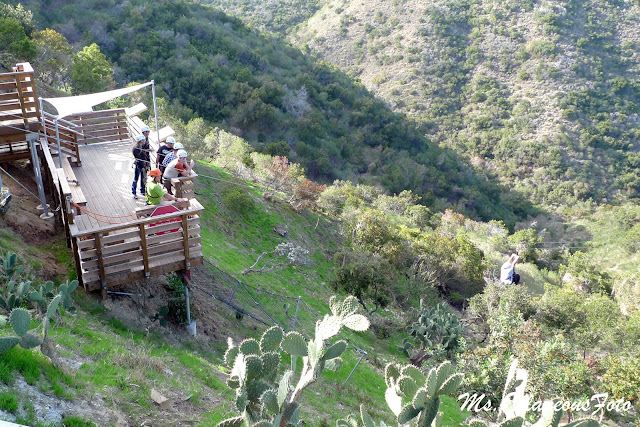 Memories of our morning adventure came back when we saw this zipline platform. 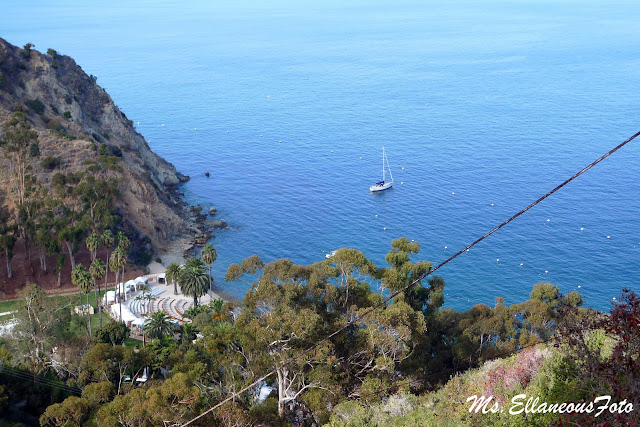 A view of Descanso Beach Cove 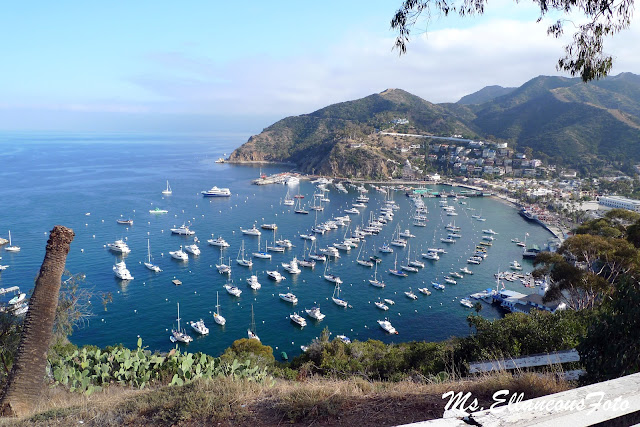 As we made it down on the other side, we saw the interior landscape of the island where the residential areas had been established. We passed a house that now belongs to a descendant of Shatto, another one which was once the resident of a Hollywood actress, and a mansion belonging to the grand daughter of WIlliam Wrigley.
As picturesque as this place is, for now there are signs about no swimming in the bay. A budget has been earmarked to address the pollution being caused by an antiquated sewage system. As the conservancy strives to retore the island's natural equilibrium, we can all look forward to having a nice visit to this beautiful "gem in the ocean."
Posted by yolanda at 19:51