From San Giovanni Rotondo, we found ourselves in Puglia - in a church that was built to find a resting place for a miraculous history - the intercession of  St. Michael the Archangel, in a series of apparitions. 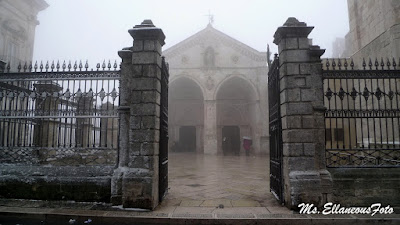 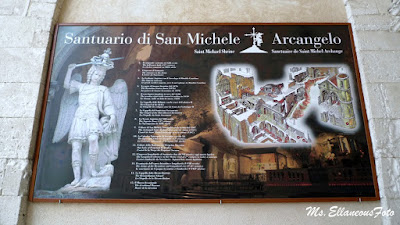 This looks like another gothic church, but there is a unique feature to discover - a "sacred cave." In the Sanctuary of St. Michael the Archangel, it is said that  he had appeared here three times - in the years 490. 492, and 1656. 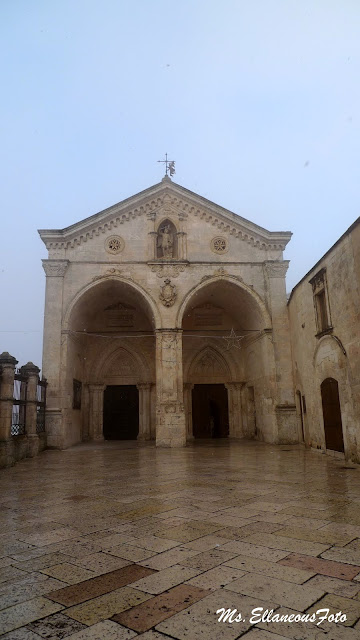 Known as Monte Sant’Angelo or the Shrine of St. Michael the Archangel, it is located in the hills of "Promontorio de Gargano"(Gargono Promontory) in the east coast of the south-central part of Italy, right by the heel strap of the boot-like shaped peninsula. In the courtyard, to the right is a flight of stairs... 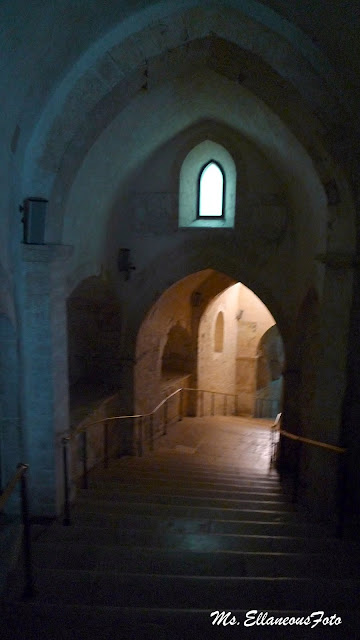 leading down to the church where the cave is, where St. Michael had made an impression of his visit.
During the early hundred years in our calendar history, the Roman cult of Mithraism – the shedding of the bull’s blood in caves, was in practice. According to the traditional story, in 490, there was a noble man – Elvio Emmanuele, who was searching for the best bull he had in his herd that had gone missing. As he went around, he found the bull kneeling in a cave. Since it was difficult for him to approach the bull, he shot an arrow towards the bull, but the trajectory of the arrow changed and hit him, instead. Surprised and bewildered, he went to see his local bishop about the incident, who in turn asked him to pray and fast for three days. After three days, St. Michael appeared to the bishop and identified himself:  I am Michael the Archangel and am always in the presence of God. I chose the cave that is sacred to me. Where the rocks open widely, the sins of men will be pardoned. What is asked here in prayer will be granted. Therefore, go up to the mountain cave and dedicate it to the Christian God. Thinking that he may be going mad, the bishop did not do anything about this visionary encounter.
After two years, there was a town under  the bishop’s diocese – Siponto, that was attacked by the pagans from the city of Odoacre. Once again, Michael the Archangel appeared before the bishop with a promise to save the beleaguered city. Soon after, a big storm visited Odoacre  and sidetracked her people. This was how the city of Siponto got saved. Gratetful, the bishop led a thanksgiving procession to the mountain cave, but dared not to enter it. Was it skepticism or fear that kept him from entering the holy cave? 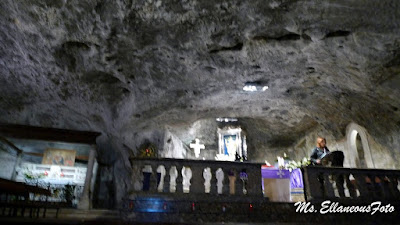 Now a grotto, this is the cave. With an altar set in and pews below for the pilgrims, masses are held here regularly.
Still at another time, the archangel gave the bishop one more visit, to explain “It is not necessary that you dedicate this church that I have consecrated in my presence. Enter and pray with my assistance and celebrate the Sacrifice. I will show you how I consecrated this place.” As the bishop, finally, entered the cave, there was an altar covered with a red mantle, “a crystal cross and a footprint on the ground.” This was enough to convince the bishop that he was not seeing nor hearing things and soon commissioned a church to be built by the cave’s entrance, which became known as the Celestial Basilica. 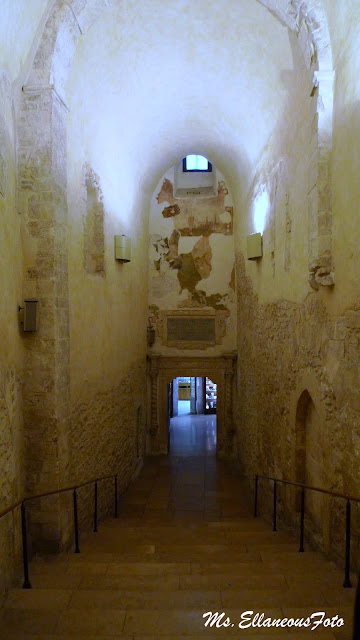 The fresco above the door is a depiction of the bull episode, restored in 1999. 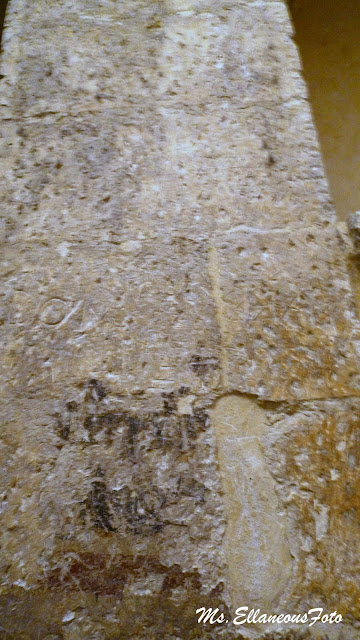 There are inscriptions that can still be seen. 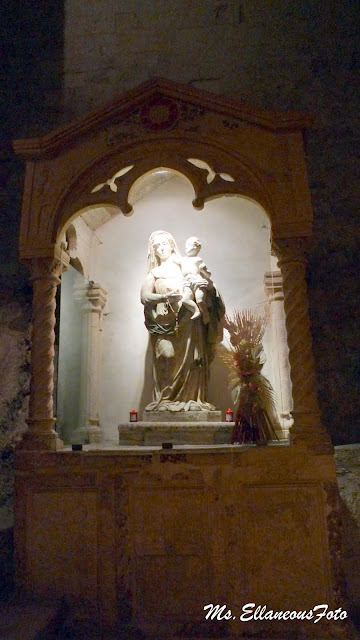 A statue of the Madonna and Child 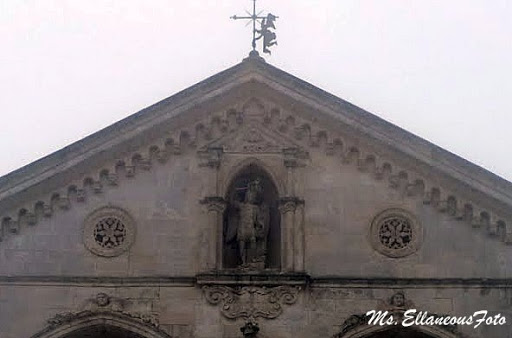 This present church façade - the upper atrium with the statue of St. Michael, dates back to the 1895. 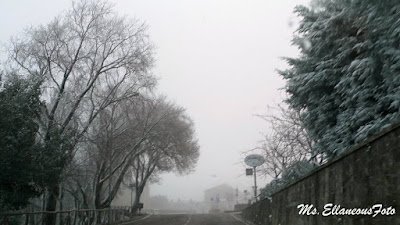 The stormy weather continued as we got back into the car with our seasoned-cab driver, whose services we hired for the day, and we were heading to another church... 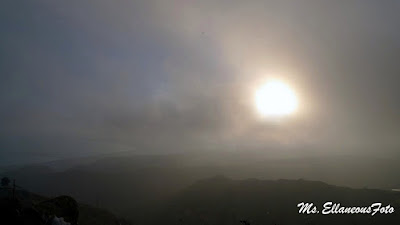 when the sun finally peeked in. 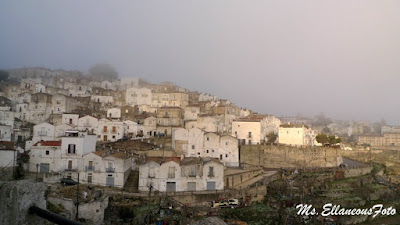 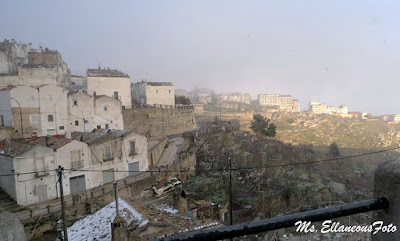 Just like a painting, this town suddenly appeared as we were going downhill. 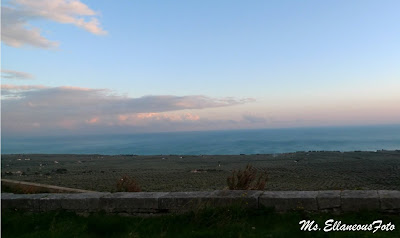 Then, we were at sea level and continuing on to where a Eucharistic miracle had taken place.
September 29 is the feast day of St. Michael the Archangel, along with St. Gabriel and St. Raphael. His name signifies "Who is always with God." In the Christian religion, he is the angelic character who led the good angels in the heavenly battle, triumphantly, against the forces from hell. He is the patron saint of the "grocers, mariners, paratroopers, police and sickness." Since the time of the apostles, he has been looked upon as the "patron and protector" by the church.
Prayer to St. Michael the Archangel
St. Michael the Archangel,
defend us in battle.
Be our defense against the wickedness and snares of the Devil.
May God rebuke him, we humbly pray,
and do thou,
O Prince of the heavenly hosts,
by the power of God,
thrust into hell Satan,
and all the evil spirits,
who prowl about the world
seeking the ruin of souls. Amen.

In a couple of days - on October 2, is the feast of the Guardian Angels. Matthew 18:10, when Jesus was talking about the little children, he spoke these words: See that you do not despise one of these little ones, for I say to you that their angels in heaven always look upon the face of my heavenly Father. I still remember my "Angel of God Prayer of Protection" from when I was a kid. Let's honor and thank our guardian angels for always being at our side "to light and guard, to rule and guide" us.
Have you met your guardian angel yet?
Posted by yolanda at 19:20