One of the much visited out-of-town tourist places in France is Claude Monet's house and garden in Giverny. Just 75 kilometers west of Paris, in Normandy, it is a pleasant drive or a less-than-an-hour train ride to Vernon, and another 4 kilometers to Giverny. Figure out how to get there, and make it a point to go and understand how Monet loved being here in the latter part of his life.

Claude Monet (1840-1926) was one of the most prolific impressionist painters. It was in the 1870s when he developed his modernistic style, after paying attention to the effects of light in the environment he painted in. It was with his short brush strokes that he came to capture the changing light elements on his canvass., in different hues from dawn to dusk, and from perfect to stormy weather.

His financial success came from his series painting , when he painted the same scenery at different times of the day or seasons. in reviewing his work, it may seem that the subject matter became secondary to the focus he gave to the effects of light, painting as he saw things were, categorized him as a renaissance illusionist.

Giverny was restored through the efforts of  Monet's son, Michel Monet, when he willed his  inherited property to the Academie des Beaux-Arts. Ten years in the making, after much of it had fallen into disrepair during World War II, the property was restored to its old glory when Gérald van der Kemp - the appointed curator of Giverny in 1977, with André Devillers, and Georges Truffaut - a distinguished gardener who was a constant, invited guest to the Monet residence - embarked on reconstructing the property. In 1980, Giverny was opened to the public. Funding for this project came, mostly, from American benefactors. 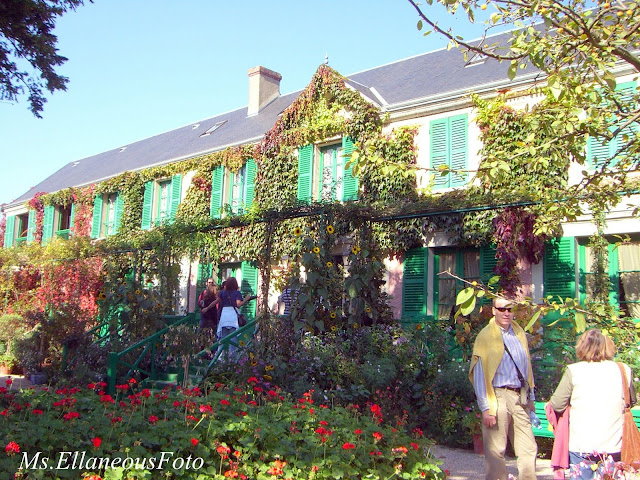 It was in 1883 that Monet moved to Giverny and transformed it to become his world.He and his family lived in this house for forty-three years.  He had designed the layout of his house according to his artistic needs and the needs of his family, adding rooms or wings whenever he felt the need to. He made the left side of the house his wing. A tour of Monet's house will give you more interesting insights as to his lifestyle, his taste, and the influences he got from others.

As an artist, he kept tabs with how his career was progressing. Some of his original paintings can be seen at the Musée Marmottan-Monet, in Paris, at l'Orangerie, a few at the Musée d'Orsay. A good number of his works have found their way to different parts of the world, some of which were brought back to Paris, last fall, for a retrospective exhibition that was put together at the Galeries Nationales, Grand Palais. He became famous during his life time and was recognized as a master by the age of fifty. 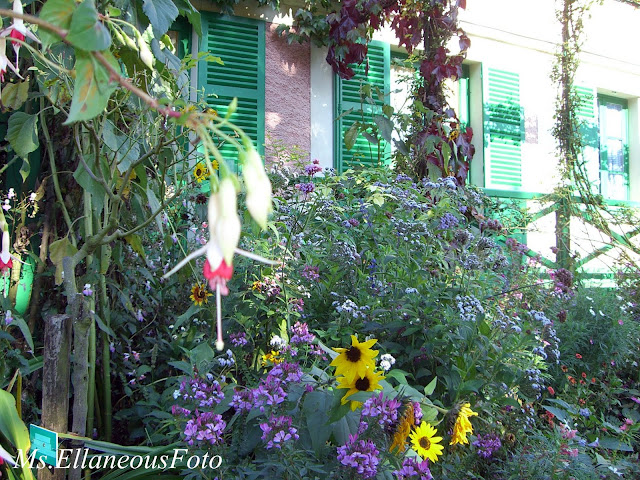 Visitors are welcome to take a tour of the house, but there is a No-Photo/No-Video policy. From the art pieces hanging on the walls, it is obvious that Monet had a great love for Japanese art.

The exterior of the house is a pink shade with green shutters - a color combination that was thought of by Monet, himself. These colors are now typical of the Mediterranean landscape. To the front of the house, he positioned plants next to the house by setting up a pergola for climbing roses to cover and other creeping vines, to make the house blend with the garden.

There are two parts in the garden: Clos Normand - the garden in front of the house; and the Japanese-inspired garden on the other side of the road. In Clos Normand, Monet fashioned a one hectare area "full of perspectives, symmetries and colours." 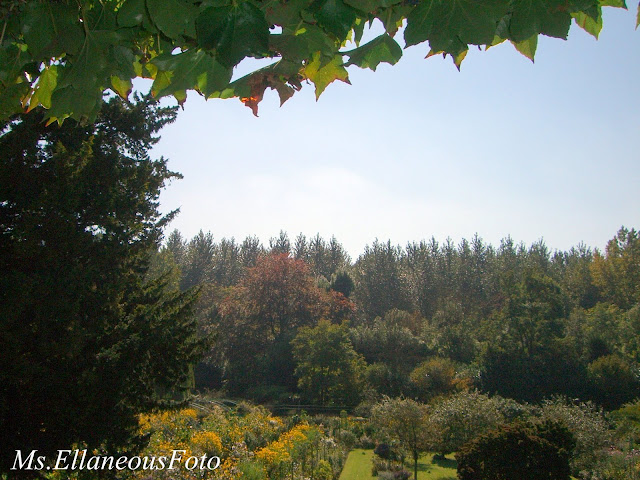 Monet's view of the garden from his bedroom 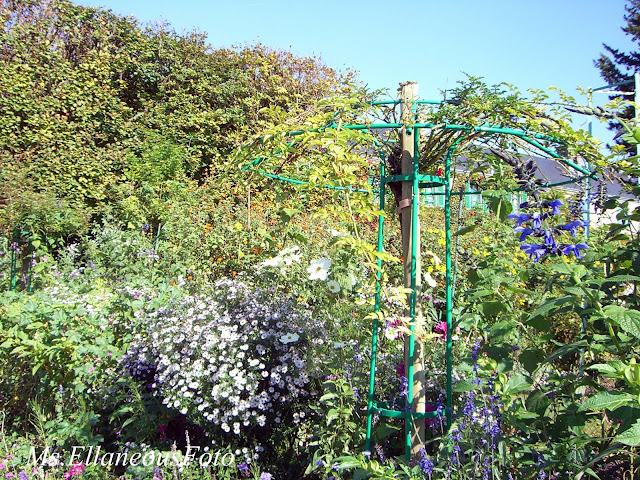 
The garden area is divided into several plots of flowers, fruit trees, blooming vines, and annuals. The garden has been replanted with plant species, as close to how Monet had planted them, originally. 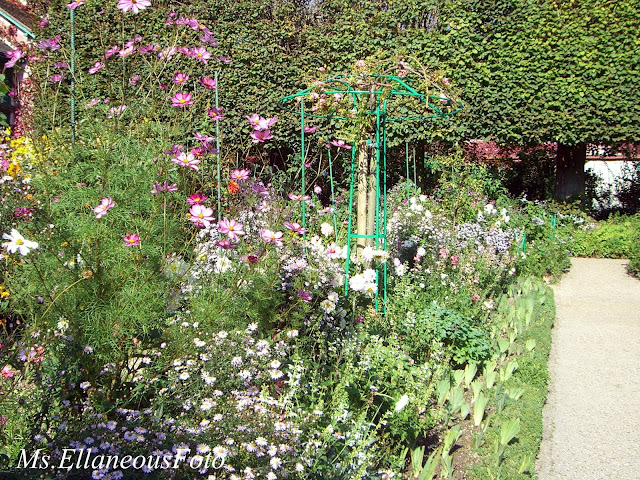 Immediately, one will notice the color combinations from the random planting of flowering and ornamental plants. As Monet's interest in botany grew,  he exchanged plants with his friends - mainly, with Caillebotte and Clemençeau. He had also invested much in procuring rare varieties

In the Japanese inspired garden 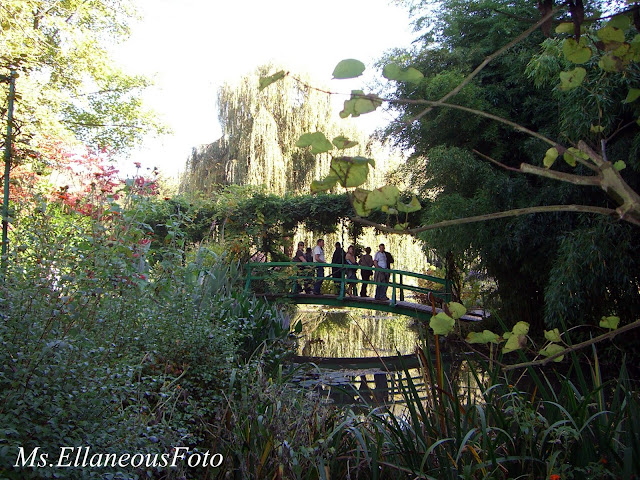 The Japanese bridge in his pond


Monet painted outside. He designed his garden with specific elements. As his garden evolved, with the plants and trees growing to become visually appealing, he began to capture the beauty around him in his paintings. Giverny became the subject of his paintings in the latter years of his life, when he travelled less and settled down in one place.


There is continued admiration from the Japanese towards Monet. Thanks to another project of Gérald van der Kemp, there is a Jardin de Monet Marmottan au Village de Kitagawa (Garden of Monet Marmottan in the village of Kitagawa), that replicates much of  Monet's garden in Giverny, in the little Japanese town of Kitagawa-mura, in an island south of Hiroshima and southwest of Osaka. And, the Japanese visitors love it, describing it as a "stunning French garden." 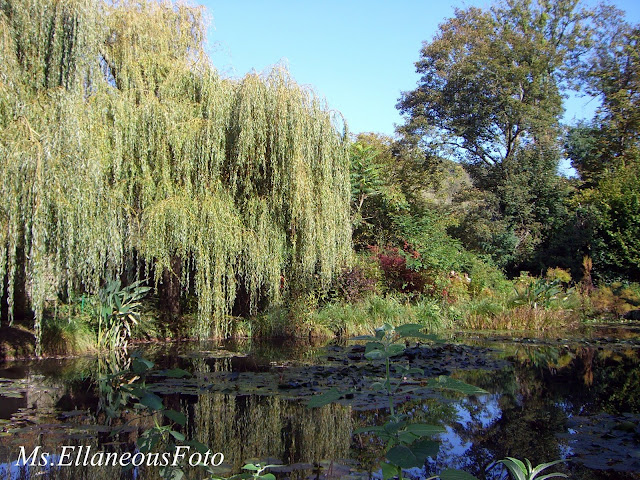 The water lily pond with the weeping willow trees 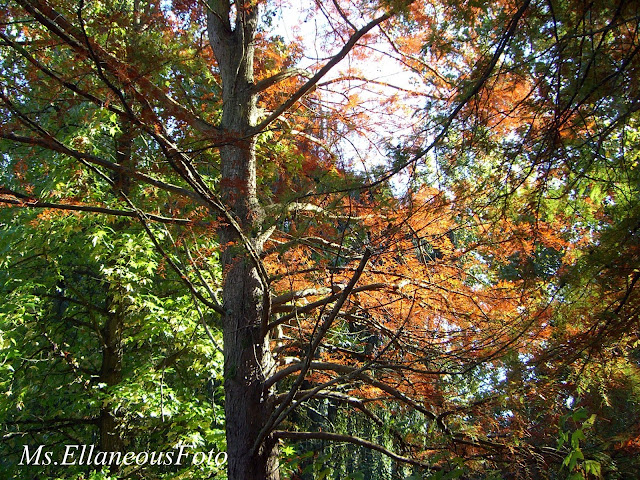 Maple trees abound in the Garden. Fall colors come as early as September or October, depending on the weather conditions.

More of the garden pond... 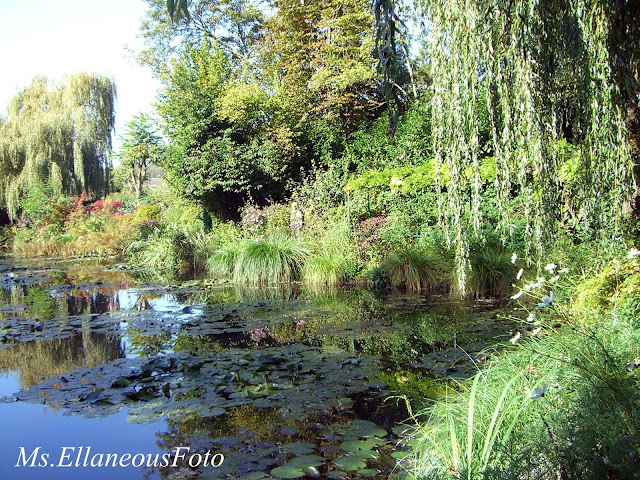 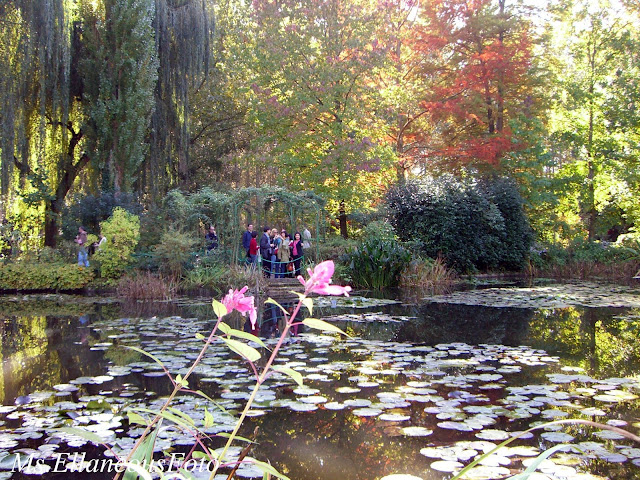 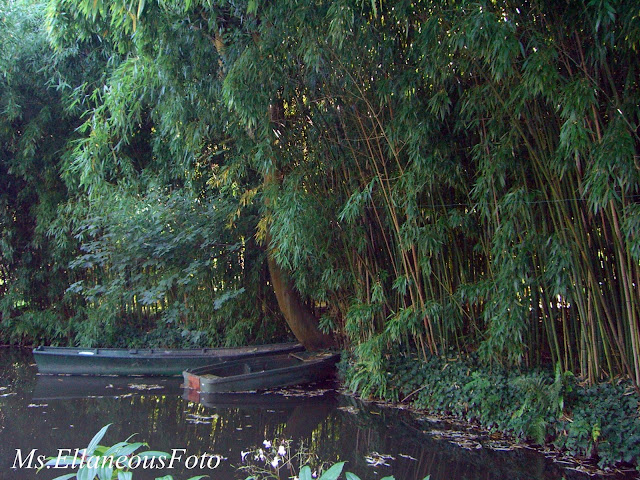 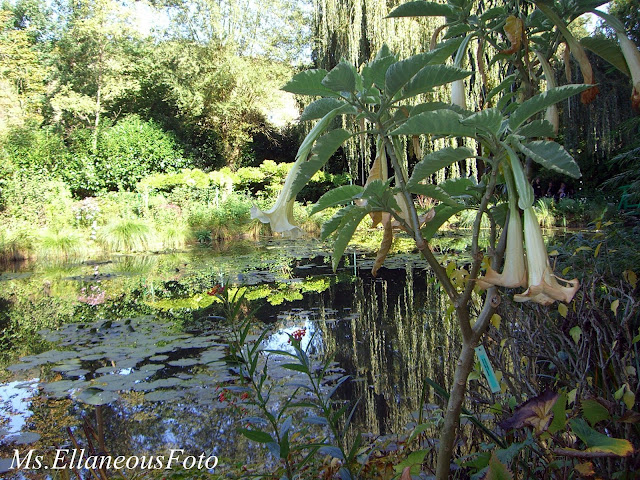 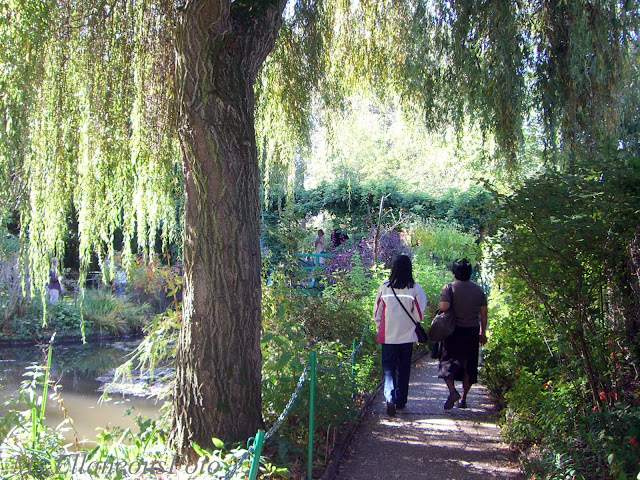 A pathway to walk around the pond 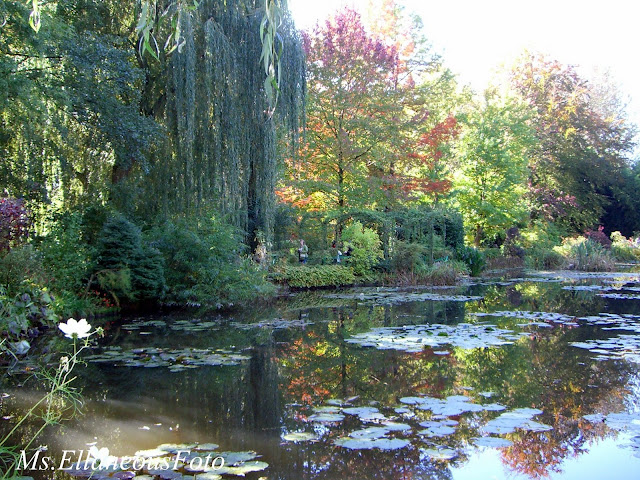 Monet was mystified by the lighting effects on the water lily plants in his pond. After the armistice on November 11, 1918, he confided to his friend - Clemençeau, his desire to celebrate the victorious war and the peace it brought about by making a donation of a series of panels - paintings of a group of flowers - to France. His eyesight was afflicted by then but he persevered to finish the work. After almost ten years, it was after his death that his paintings were displayed in 1927 at the Musée de l'Orangerie, located at the Jardin des Tuileres. Renovated a couple of years ago, visitors can now sit, meditate, and be in awe of the master's works entitled  Les Nympheas (The Water Lilies), in a panoramic setting at L'Orangerie.

A close up of different blooms and plants in the garden 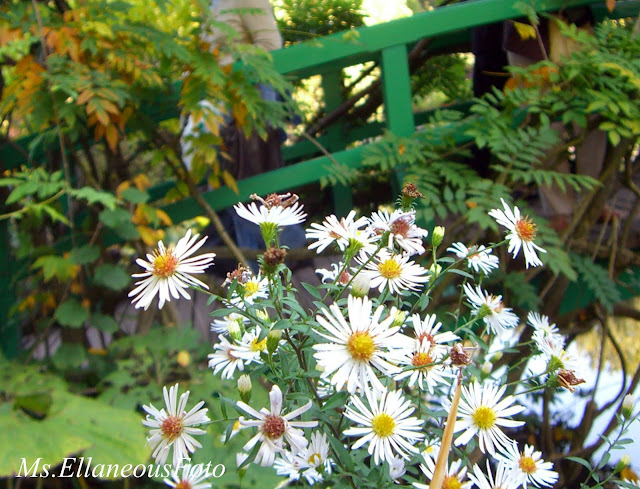 Daisies below the Japanese bridge partly covered by wisteria vines 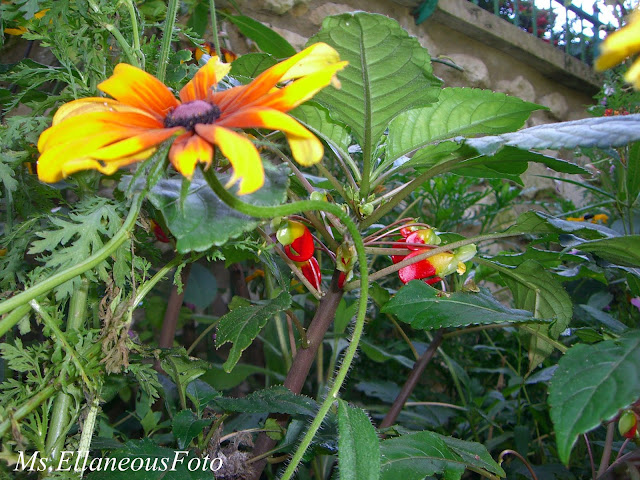 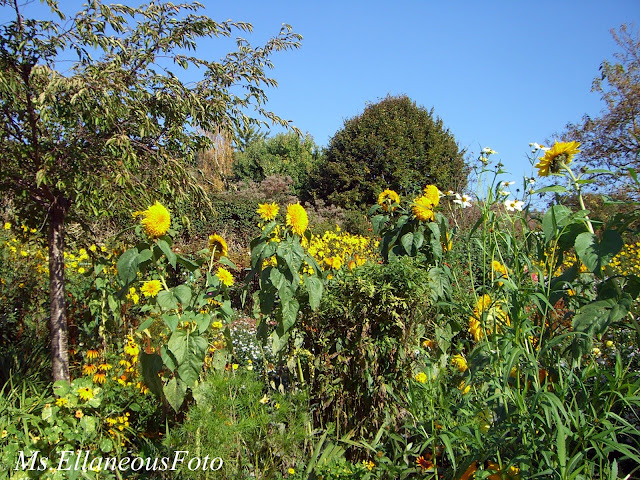 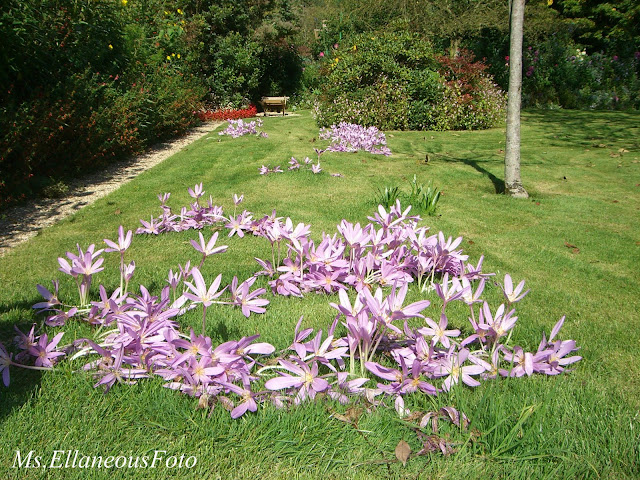 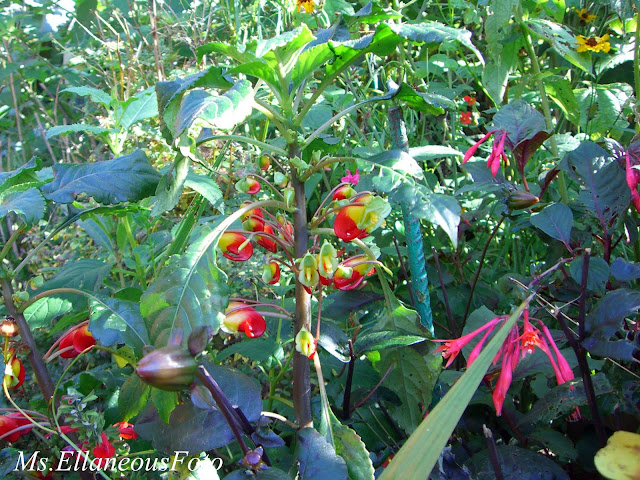 A plot planted with a variety of flowering plants in shades of red, fuschia, and orange... 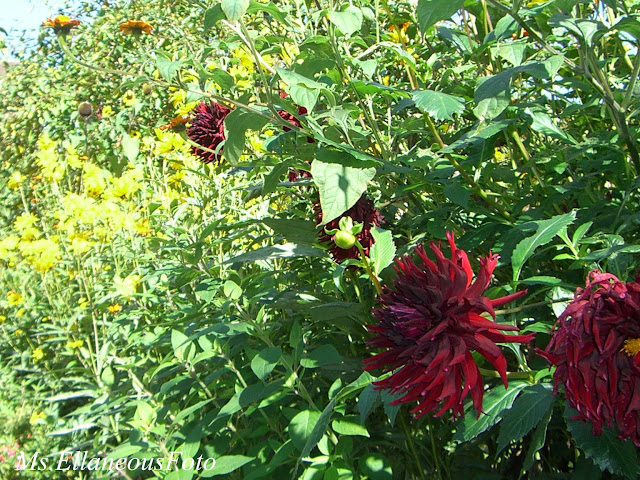 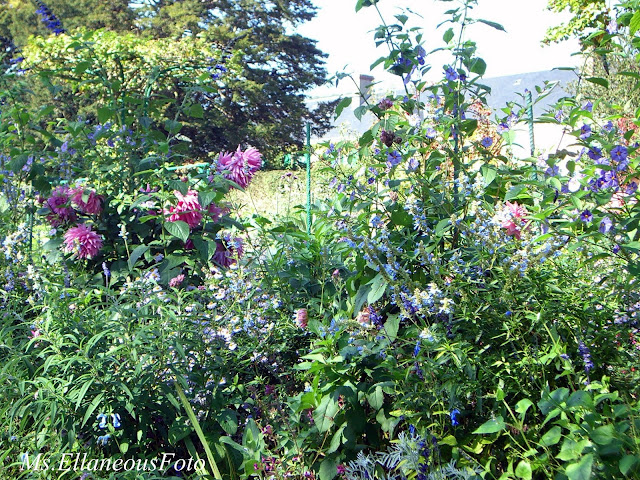 A plot of pink, purple, and white flowers in different heights 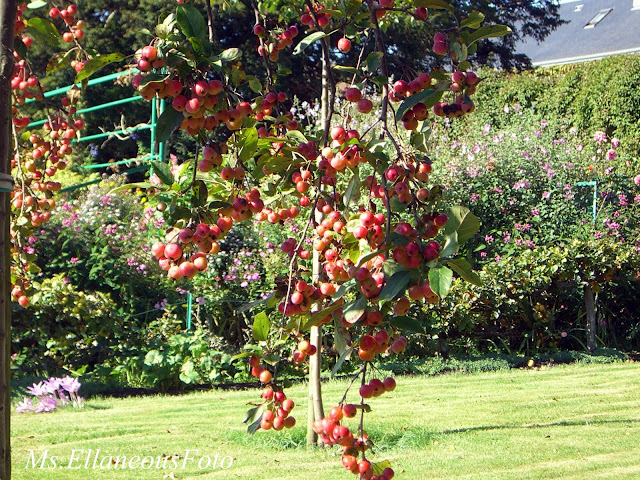 One of the fruit bearing plants - a crab apple tree 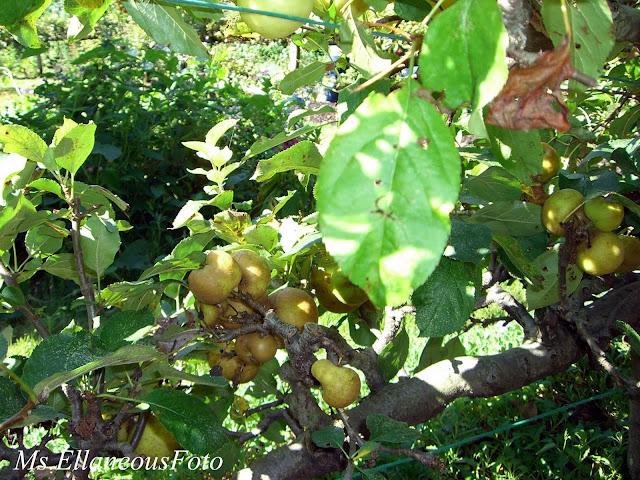 Apple trees are kept low and trained to grow sidewards as a fence in one area of the garden. 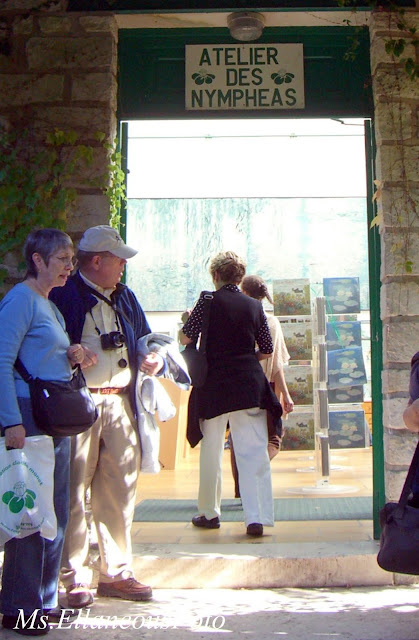 As the visit comes to an end, the exit is through the gift store where you can leave with a souvenir on hand - from a tote bag to prints of Monet's paintings, and other functional and decorative items to choose from.

If you are a flower enthusiast, there is a flowering calendar, with details of what are in bloom from month to month. It is open daily from April 1st to November 1st. For tour and other information, please click on the link.

Perhaps you have been inspired by Monet's works. Get your painting supplies and give it a try. I did. And to my surprise, I came up with my own style of painting flowers. It's not quite how I see them, but it's how my hand strokes translate them from my imagination. I think that makes me an abstract illusionist.

Make a date with Monet. It can be nourishing for the soul.
Posted by yolanda at 00:27