The Most Beautiful Bridge in Paris - Pont Alexandre lll

Judged to be the most beautiful bridge in Paris, this bridge - Pont Alexandre lll, is the only one of it's kind. Designed in the Art Nouveau style, it was built by engineers Resal and Alby... 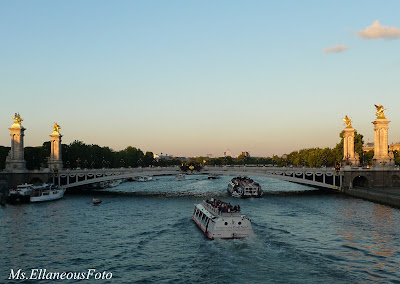 at about the same time as the Grand Palais and the Petit Palais, for the 1900 Exposition Universelle (World's Fair). Using stone and metal, this bridge is lavishly decorated with ornate lamp posts, 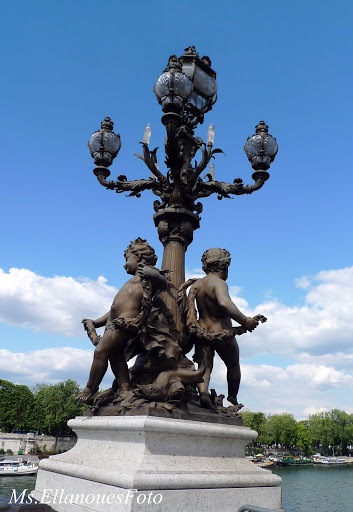 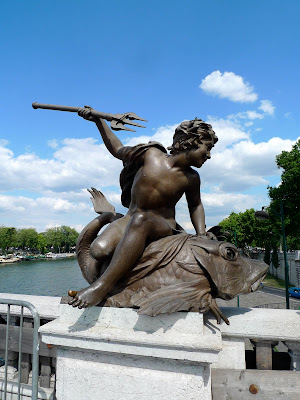 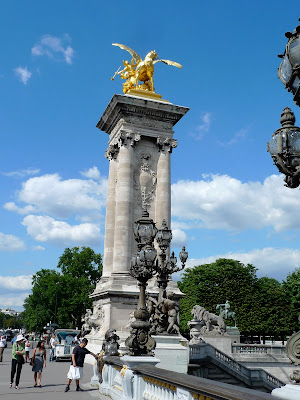 and gilded statues of winged horses on four granite pillars that are 17 meters high, on each corner of the bridge. 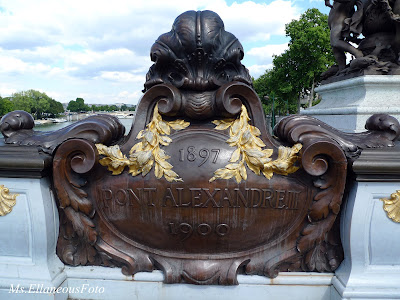 Though the construction was started in 1897, the first foundation stone was laid by Russian Tsar Nicolas II in October of 1896. This bridge was to symbolize the friendship between Russia and France and was named after Tsar Alexander lll, Nicolas ll's father. It was opened to the public, in time for the 1900 universal exposition. 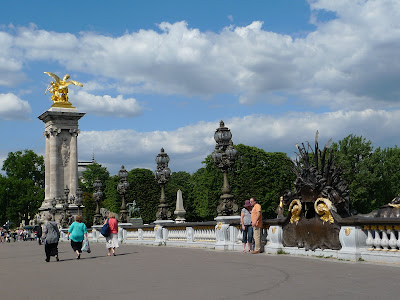 With the sidewalks almost as wide as the street on the bridge, its a picturesque background for the the tourists to have their I-was-here pictures taken. 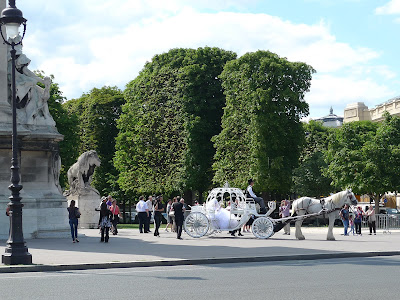 It's a favorite spot for post-wedding pictures to be taken. This time, it looked like cinderella came to town with her prince-charming husband. 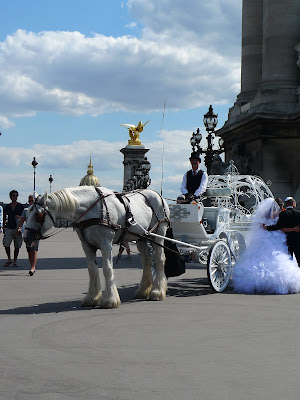 This pair, surely, got the attention of the passersby. 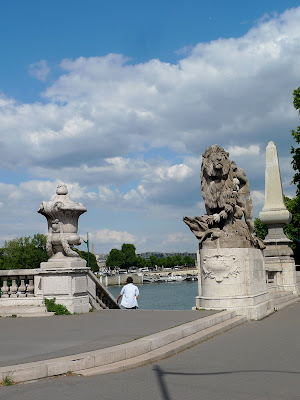 The staircases leading down to the level of the Seine River are well guarded by the king of the jungle - the lion. There are four to descend on, two from each end of the bridge, from both sides of the street. 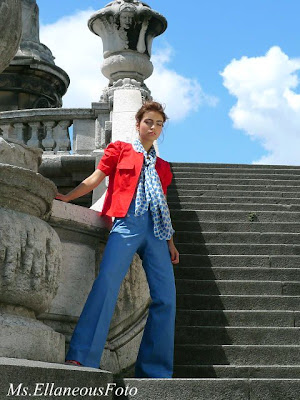 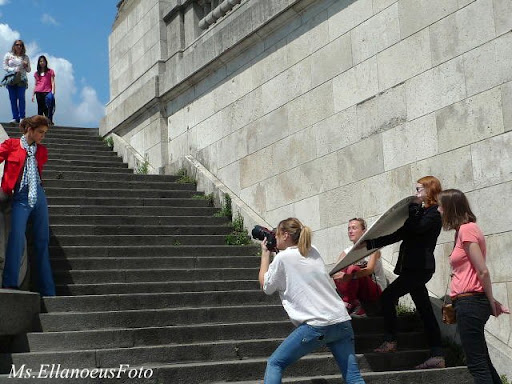 On one occasion, there was a fashion shoot going on.


This bridge is used quite often as a venue for other events, I found out. 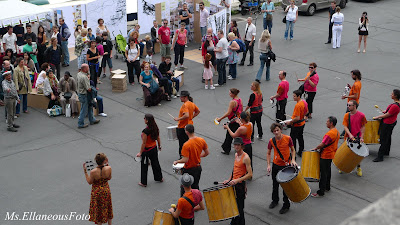 One Saturday, while walking on the street level by the Seine, I heard something - my kind of music - Batucada - a Brazilian music genre with African influence.
The association of houseboat owners on the Seine River organized this event for an afternoon of entertainment. There was a small exhibition of designs - about life on the Seine.  But for the most part, the people stopped above on the sidewalk, to listen, or came down to the river level because of the performers. 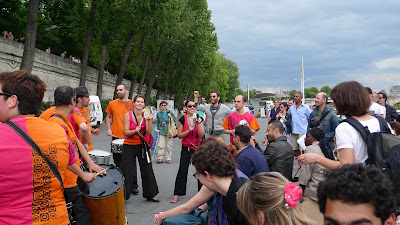 We were dancing the samba to the rhythm of the drums, the sounds of the tambourine, cowbells, rain makers, and other noisemakers. What fun! Here's a sample of the Batucada sound. You might as well get up and dance. 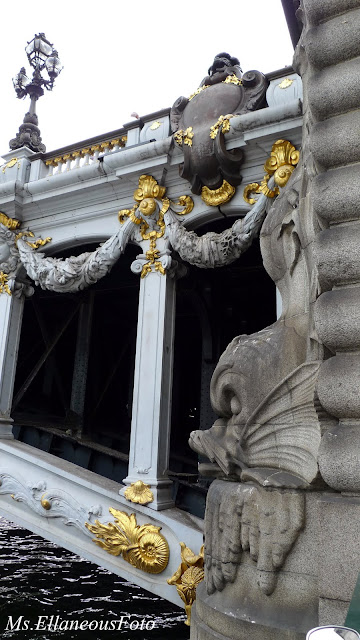 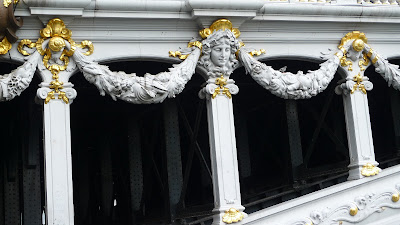 Down on the level of the Seine River, a close-up look at the decorative details of the  bridge shows the intricacies of the designs. 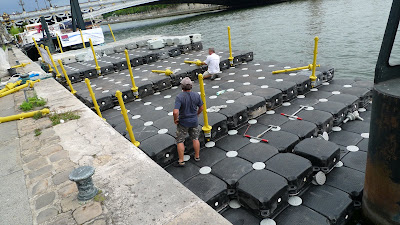 As I was walking by, I noticed these stair-like contraption made up of a floating-cube system. They were being dismantled after a triathlon event that had just been completed, earlier in the day. This was used as the dive-off platform by the participants. 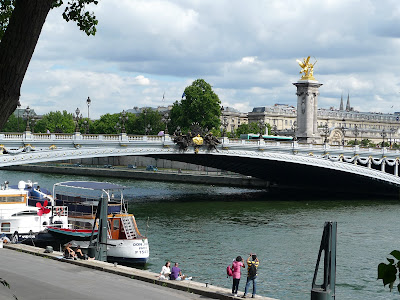 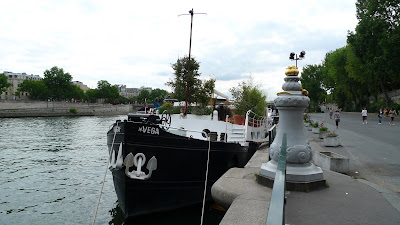 Continuing my  walk along this path and it brought me close to some of the houseboats docked along the river. 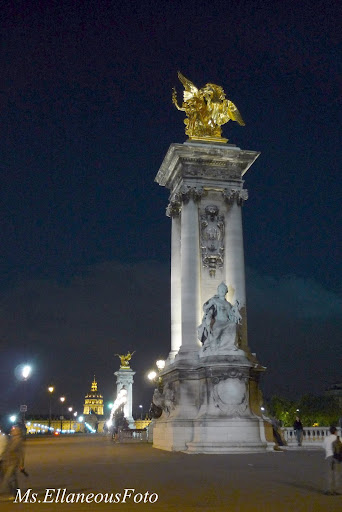 At dusk, the sculptures come alive with the shadows cast. 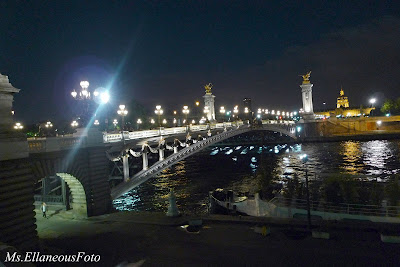 The bridge takes on more special effects when the lights are turned on.
And on the weekend, there's added action going on when you go through that tunnel under the street, next to the bridge - the pathway used by vehicles and pedestrians. 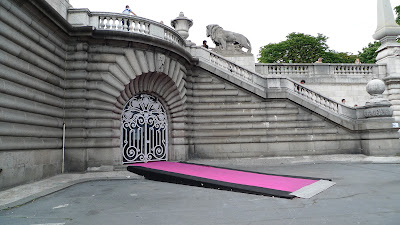 Right next to one of the the descending stairs is the  entrance to LE SHOWCASE BAR. 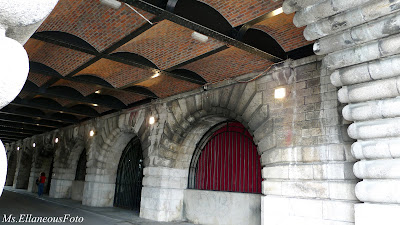 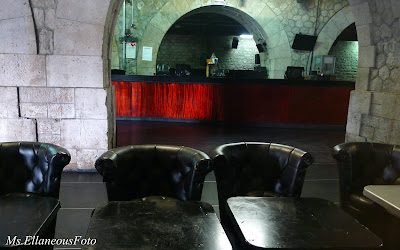 This bar, which was originally the boat hangers below the bridge and now converted, comes alive on the weekends. It's one of the newer venues where the night life for the young and hip takes place, where one can discover up-and-coming bands playing their music, with guests dancing 'til the wee hours of the morning. As this is always packed, calling in to make a reservation would be a smart thing to do.
Le Showcase Bar
Underneath the Pont Alexandre lll
Port Des Champs-Elysées 75008 Paris
Tel. no. 01 45 61 25 43
METRO: Lines 1 & 13 (Champs 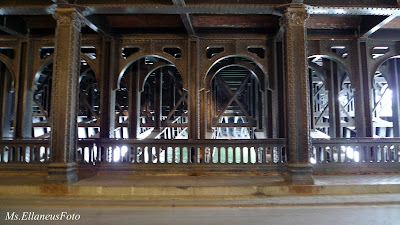 When looking under the bridge... 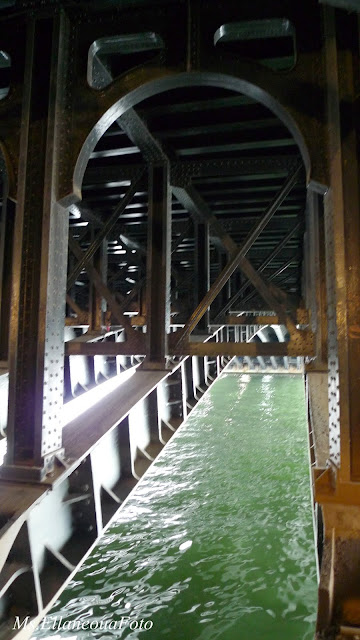 one can appreciate the engineering design of steel columns - criss-crossed bars, pillars, and arc-shaped metal, designed to support... 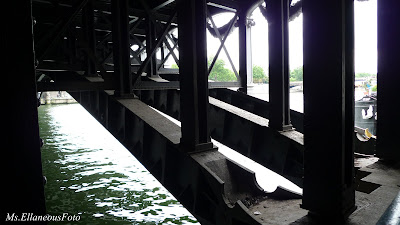 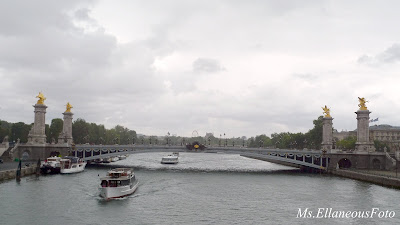 It's been rainy weather in the last couple of weeks. But even on a gloomy day, it is still a sight to behold. 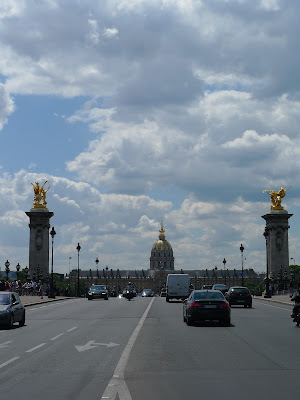 Pont Alexandre lll served it's main purpose during the 1900 Universal Exposition of bridging the two sides of the Seine River, where 50 million people traversed from each side to the other, as they went around the exposition sites. For the last century, it has been a major thoroughfare connecting the Left Bank - where the Esplanade des Invalides is, to the right bank, passing the Petit Palais and the Grand Palais on avenue Winston Churchill, and ending on the Champs-Elysées. That golden dome is the Cathédrale de Saint Louis des Invalides, where Napoleon's tomb is located.


When you come to walk and admire this bridge, make it a romantic one on your memorable visit to Paris.  Linger awhile and take in the beauty around you. Let it be a passage to your next stop to the left or right bank. 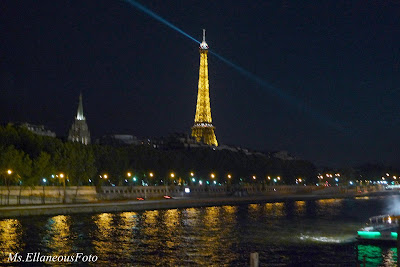 Not too far is another lovely sight - the Eiffel Tower.
Posted by yolanda at 06:55