This was the 36th year that Paris hosted this event - Le Tour de France. It's a triumphant celebration for the winners, after a grueling three-week competition, and finally riding through the last 95 km, stage 21 - from Créteil to Paris, after going through mountainous (Pyrenees and Alps), zig-zagging routes and plains. For those who managed to stay on the tour, their efforts focused on riding strategically fast, at a blistering pace, to win the yellow and green jerseys. It took team effort to win. Team strategies were crucial in making use of the talents of the team members in supporting, breakaway, and lead roles.
Congratulations to the winners... 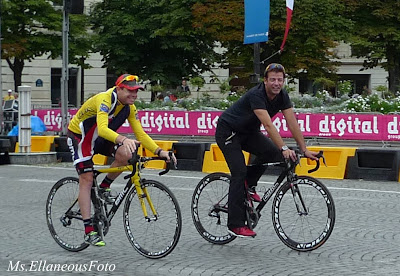 the first Australian to win the coveted "Yellow Jersey"  (with the lowest over-all time) Cadel Evans ... 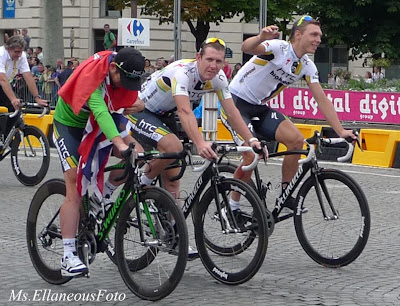 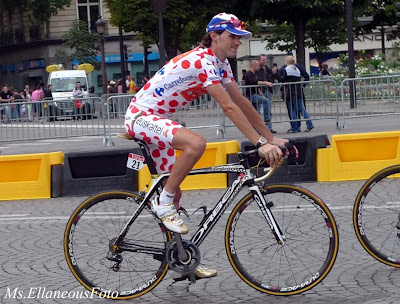 Spaniard, Samuel Sanchez was awarded the polka dotted jersey (king of the mountains) and the white jersey (young rider classification) went to Pierre Roland of France.
A total of 3.4 million euros was given away. Prize winnings are usually divided among the members of the winning teams.
By the time this finished it was almost 8:00 p.m. Can you imagine how some people - the spectators - had been there for about 9 hours? I was! I went out thinking that the event was going to commence at 12:00 noon. Not quite, I found out as it was scheduled for 4:00 p.m. I made some friends and we were all right next to the barricade - a prime spot. I hesitated to leave it. I asked my new-found friends to watch my place and I left to get some folding chairs and food. That turned out to be a smart move.
In the hours that passed, we got to see the progression from part of the preparation to the final stage- le tour d'honneur (the victory lap). 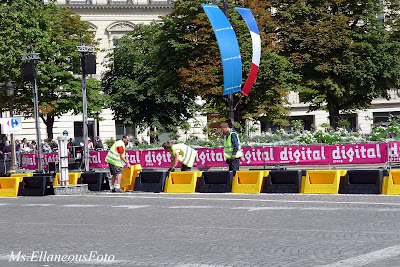 The center divider was being completed. 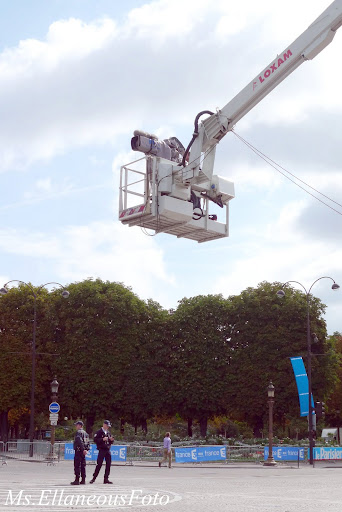 The roving camera was hoisted up into position. 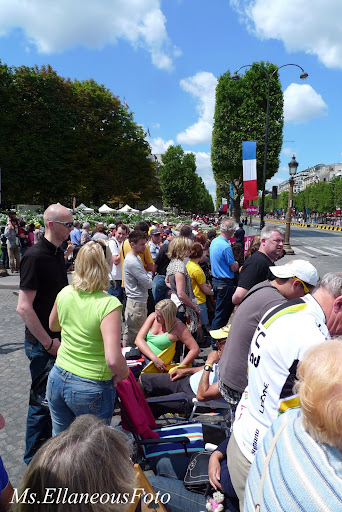 The spectators were coming, with several hours of waiting to go. It was all about getting a good vantage point. 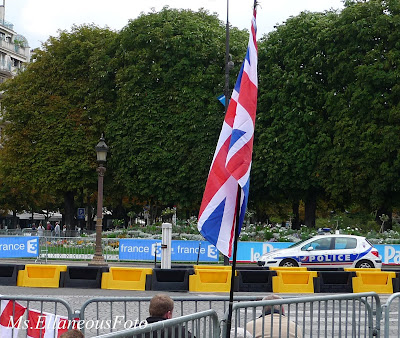 The people who attended this event were of different nationalities. The British had one of the biggest delegations. And they were , of course, routing for Mark Cavendish.
I learned how serious the people in the crowd were about Tour de France. One of my new friends biked for 4 days from London to Paris, in a charity event that brought him here in time to see the final stage at the Champs-Elysées. I was getting running commentaries from the people around me, as to who was coming towards us, their ranking, and the problems they encountered. It was quite interesting,
At 2:00 p.m., the sponsors' parade began - a marketing parade of products - with a presentation of a wide range of services and consumer goods.  We were entertained by the designs and the music, the dancers and the acrobats performing to get our attention. 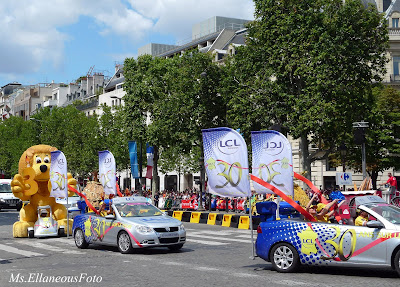 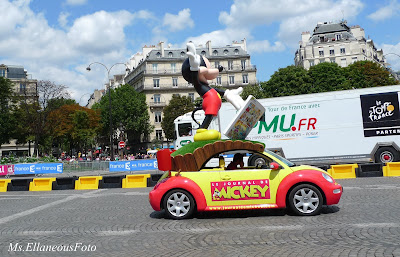 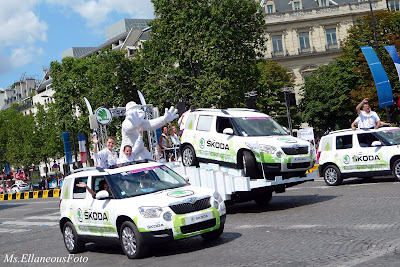 Skoda - the official car for the Tour de France 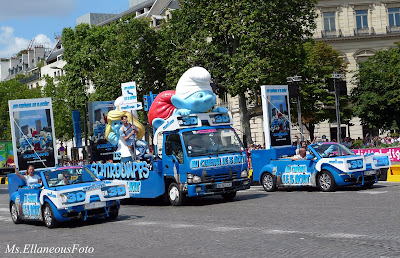 The new Smurfs movie in 3 D - a family comedy. 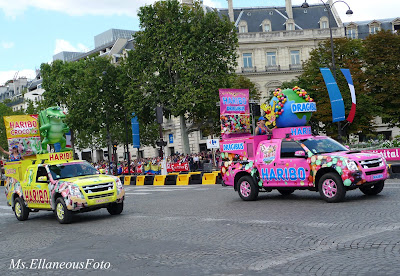 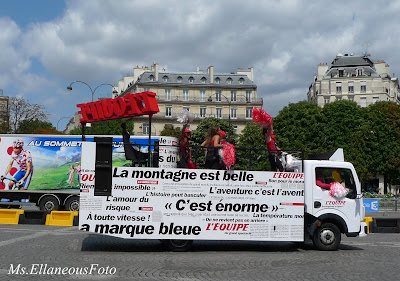 A sports magazine and internet site 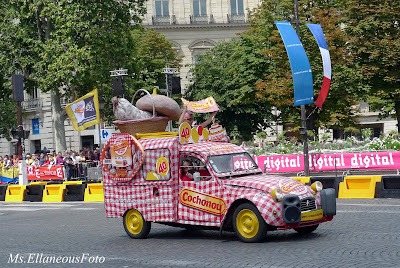 A sausage manufacturer
This parade went on for an hour with many more companies participating. After, there was another lull for more than an hour. While waiting, I managed to take a nap and pray. I could have finished reading a book, had I remembered to bring one. Finally, the announcement came, during the usual commentary, that the cyclists where about to arrive. This was the moment we had all been waiting for. 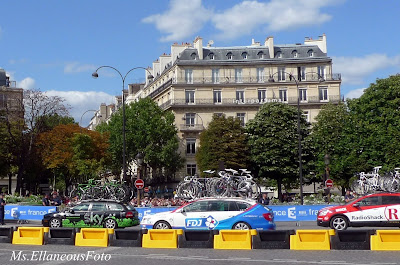 Thus, another parade started to welcome them, and soon the car's of the different teams lined up and passed us by. The crowd cheerfully clapped and anticipated the members of the teams to follow soon. 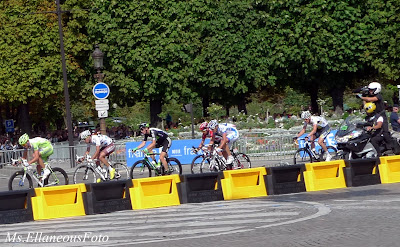 First, came the leaders of the pack. 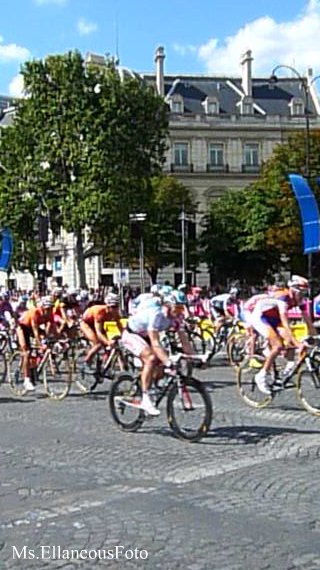 Then, the  middle group - when they came, we just had a split second to call out some names or take a picture. 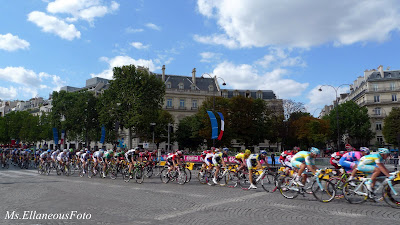 Our cameras were aimed at all times, as the cyclists had to go around the track eight times to finish the course. Cavendish had mechanical problems during the second round but managed to catch up with the middle group and kept going. The eight round finally came to pass, after over an hour, then, the awards ceremony took place at the grandstand, at the Place de la Concorde. It took another hour's wait before le tour d'honneur  commenced.
Patiently, we - the crowd - stayed. And when it was time, we showed our support as the different teams came one by one, cycling together and in no rush, this time, but to smile and wave at their supporters and fans. There were 22 cycling teams and 198 riders, who came from Russia, Kazakhstan, Australia, the United States, Holland, Belgium, Italy, Spain, England, and France. 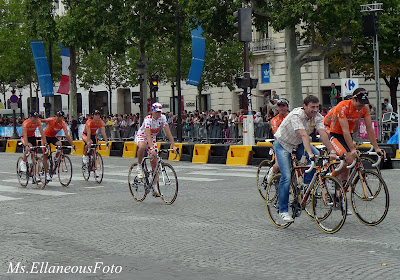 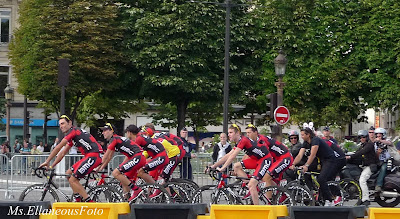 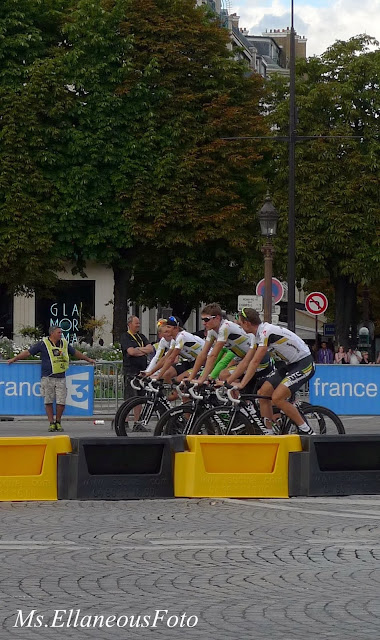 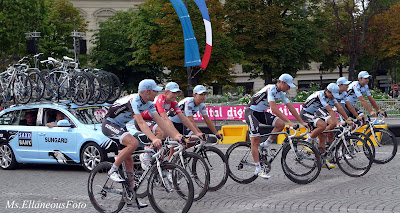 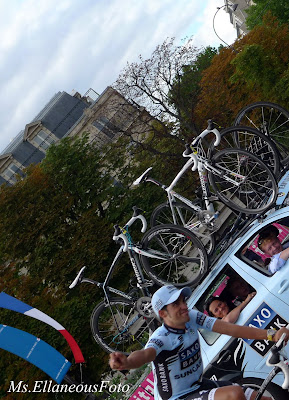 Spain's Alberto Contador, last year's winner, came into the tour this year with a failed drug test which was appealed. First, he was booed, then received warmly after he showed them his mettle in different stages of the tour. He came in number 5 position, this year.
It's the second year in a row that I got to watch this major event. I decided to change locations from the last time, and this was better - better in the sense that I could see the bikers and their teams at a closer range.

I suppose I can say that Parisians love to bike and are big fans of the professional cycling sport, as shown by  their numbers at the Champs-Elysées, showing their support for the several French teams. 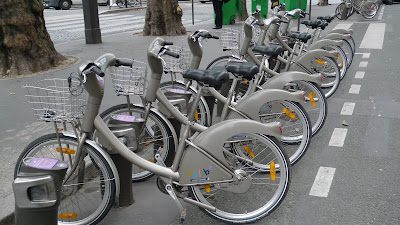 In Paris, you will notice several sights like this. Riding the bicycle is a major means of getting around in the city. The Vélib' stations have mushroomed all over the city since 2007. It's a bicycle sharing program designed for the public's use. If you want to try this, as a tourist, click on their website and buy your annual pass online. Most of these bike stations are empty on the weekends, and in the early and later hours of the day.
With the Fête Nationale (Bastille Day) just celebrated last July 14th, the world-renowned avenue des Champs-Elysées, once again, had been turned into another venue and became an open sports arena for the spectators who came to watch the fastest bikers sprint to the finish line.


It all happened on a lovely day - on July 24, 2011, with mild temperatures in the low sixties. It was a blessing that it did not rain, or that would have been one, last, slippery course for the cyclists.
Posted by yolanda at 14:13