The Principality of Monaco

Were you invited to the royal wedding? "No"? Neither was I! But just the same, let's go around this little, beautiful place.
The Principality of Monaco is between France and Italy, on the Cote d'Azur. It enjoys the same weather conditions as the French Riviera, with sunshine throughout most of the whole year. It's a very small sovereign country with the longest ruling royal family in Europe - the Grimaldis, for over 700 years. Only 1.95 square kilometer (.75 square mile) in size, it is densely populated with a population of over 30,000 in total, mostly French and Italians, outnumbering the 8,000-plus locals - the Monegasques. 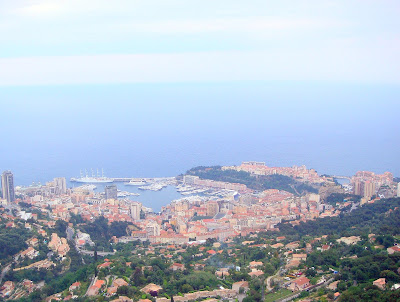 A view of the Principality of Monaco 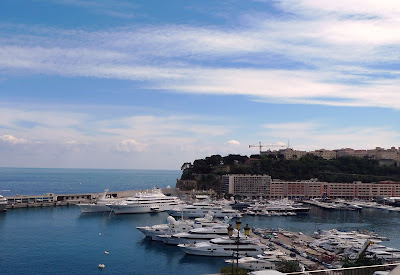 Port de Monaco...above is Monaco Ville
There is a legendary story about how Monaco came to be. François Grimaldi had supposedly disguised himself as a monk, in 1297, and seized the fortress protecting Monaco as he was able to resist the unsuspecting guards. By the 1700s, when the French Revolution came about, the Grimaldis went on exile, only to return after 20 years when theTreaty of Paris was signed.
A quick look at her history - during the twentieth century - shows that Prince Albert l was the ruler, and was succeeded by his son Prince Louis ll, who was unsuccessful in keeping Monaco neutral. She was occupied by Italy, then by the Germans during the first world war. Eventually, she was liberated by the allied forces. In 1949, Prince Rainier lll succeeded his father, Prince Louis ll, after his mother abdicated the office she inherited, in favor of her son. 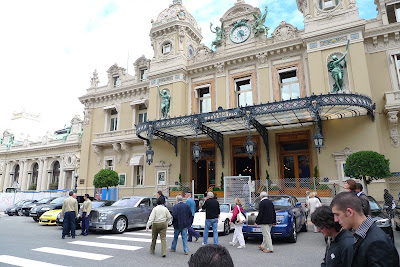 Monte Carlo Casino
As the new ruler, Prince Rainier lll worked at rehabilitating the principality from the ravages of the war. He successfully made Monaco a place of business, other than gambling - in the field of banking and other financial services. Like a fairy tale story, the prince met the beautiful love of his life and married the cinema queen, the American actress - Grace Kelly, in 1956. Together they had three children - Princess Caroline (1957), Prince Albert ll (1958), and Princess Stephanie (1965).
Then the shocking news reached the world in 1982, that Princess Grace had died in a car accident at the age of 52, while driving on the zig zag roads of La Turbie, in the company of Princess Stephanie. Prince Rainier died in 2005 at the age of 81, after 50 years as the country's well-loved ruler.
It can be remembered that the three children of Prince Rainier and Princess Grace managed to grab the headlines in not so favorable light. In 1978, Princess Caroline - against the wishes of her parents married Philippe Junot, a much older man who was also a reputed playboy, which ended in divorce. Sadly, her second marriage ended with the death of her husband, Stefano Casiraghi - an Italian business man, with whom she had three children. Her third husband was Prince Ernst of Hanover, after his divorce from his first, Swiss wife. This ended in divorce in 2008.
Princess Stephanie continued to make headlines because of the partners she chose. Rebellious and determined to live her life as she well pleased, she had her own standards and sought her own happiness. She had two children with her body guard, Daniel Ducruet, then married him in 1995 and divorced him a year later. A third child came along,  rumored to have been fathered by another bodyguard. It was in 2003 that she married a trapeze artist, Adans Lopez Peres, and it was over in less than a year.
The only son and heir to the throne, Prince Albert II, succeeded his father as Sovereign in 2005. Like his sisters, his love life has been colorful. He fathered two illegitimate children who were not considered as legitimate heirs. To ensure the succession of the Grimaldis, in 2002, Monaco changed its laws, ruling that if Prince Albert II were to die without producing a legitimate heir, Princess Caroline, followed by her children, would succeed him.
The Principality of Monaco is under a constitutional monarchy headed by Prince Albert ll. The official language is French, but English and Italian are spoken as well. The local tongue, le Monegu, is still spoken by the older generation. Roman Catholicism is the state religion.

Known for their perseverance in the face of adversity, the Grimaldi family is much loved by their citizens, enjoying a close relationship with them for the last 700 years, and undoubtedly, for generations to come. 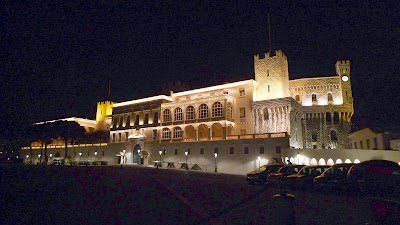 
As of yesterday, Prince Albert II became a married man. In civil ceremonies, on July 1st, he and long-time girlfriend - Charlene Witsttock, were married. She was an olympian - a South African competitive swimmer who participated in the 2000 Olympics in Sydney, Australia. She was brought up as a Protestant and has converted to Catholicism.
The civil wedding was held in the Throne room in the Palace. The proceedings were watched by the Monegasques on Palace square, via giant screens. After the customary appearance by the wedded royal couple, the citizens were joined in a reception at the Palace square, at 6:00 p.m.  The other residents of the principality were also joined by the royal couple at a later reception in the port.
As of this writing, the religious ceremony scheduled for July 2, is being held in the main courtyard of the palace in the presence of over 3500 seated, invited guests, which had started at 5:00 p.m. The festivities will be broadcast on giant screens on the Palace square. At 6:30 p.m., Princess Charlene will pay a visit to the Eglise de Sainte Devoté to offer her bouquet. 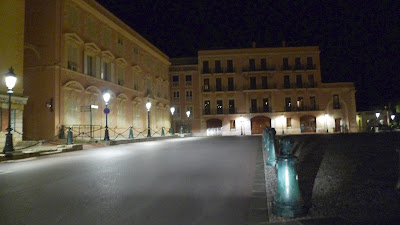 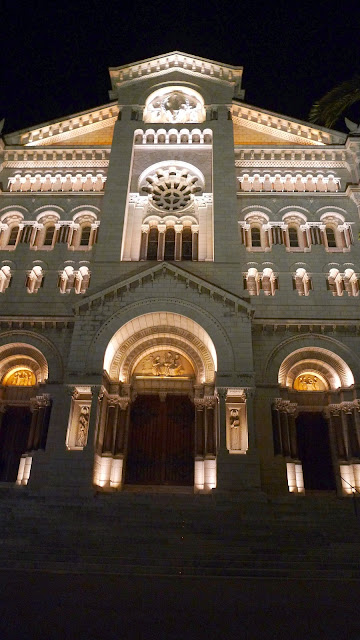 The official reception gets underway at 9:00 p.m. in the terraces of the Opéra Garnier and the  Monte Carlo Casino. 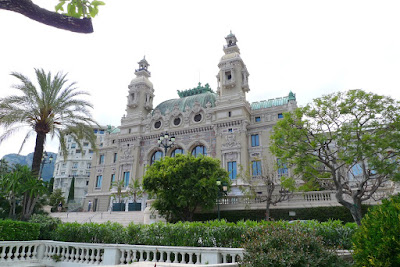 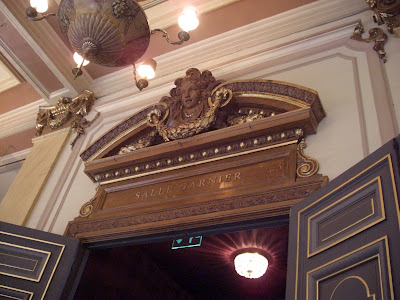 The Opéra de Monte Carlo or Opéra Garnier was built by architect Charles Garnier, who made an exact replica of the Paris opera in mini proportions. 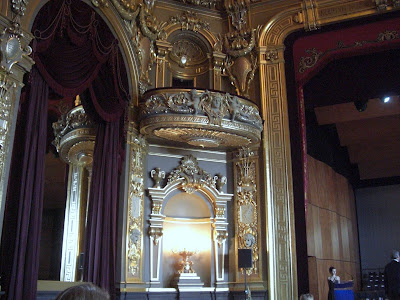 A clam-shell opera box...the auditorium is decorated in red and metallic gold 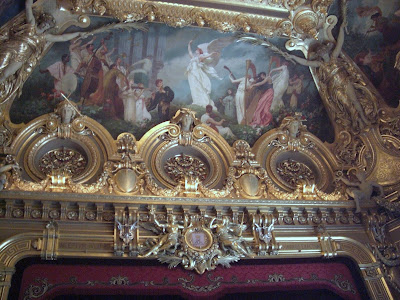 The interiors are decorated in the rich, Baroque style with frescoes and sculptures

The reception will have the signature of Alain Ducasse - a chef with 30 years of experience (as a restauranteur, hotelier, and a teacher in his field) , and who has received fame and 3 Michelin Stars for his restaurants in Louis V in Monaco, the Plaza Athenée in Paris, and the Dorchester in London. There is much anticipation to see what he comes up with, all expected to be delivered with his innovative touch, attention to details, and excellence in the art of good eating.
By the way, have you heard the rumors that there is such a thing as the Grimaldi curse? According to the legend which goes back to the 13th century, Prince Rainier l had allegedly kidnapped and raped a young maiden. The story continues to say that this young lass became a witch and put a curse on the prince's family: "Never will a Grimaldi find true happiness in marriage."
Do you believe that? Considering the rate of divorce in the western world, without a curse cast on wedded couples, no, I don't believe it. I wish the royal couple a lifetime of wedded bliss and may they be blest with several heirs to the throne.
Oh, I just remembered, we are not invited to the reception. Let's continue our little tour... 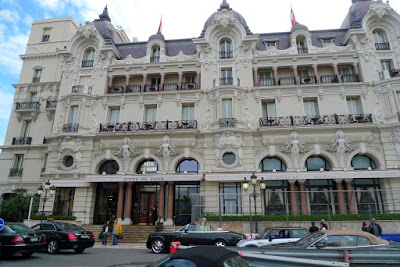 Hôtel de Paris...right next to the Monte Carlo Casino on Casino Square 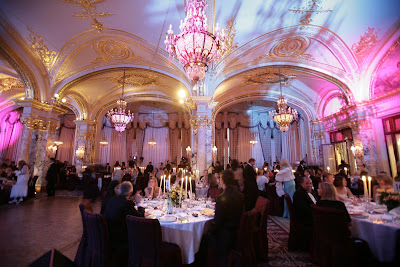 This is the ballroom 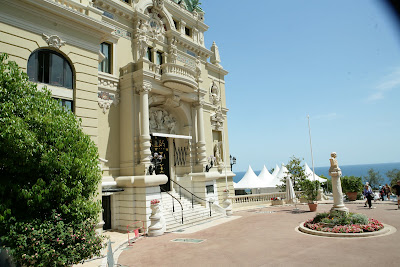 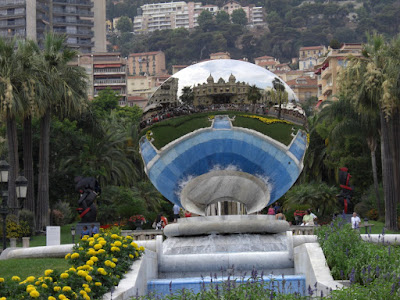 This sculpture was installed in the summer of 2007. The convex mirror gives
a reflection of the casino... 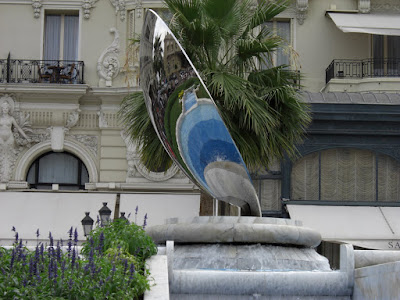 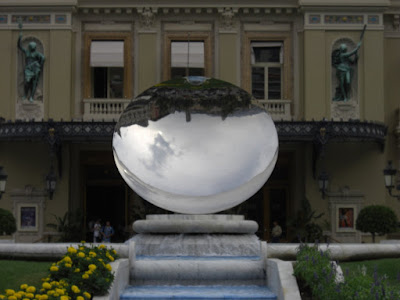 while the concave side reflects... 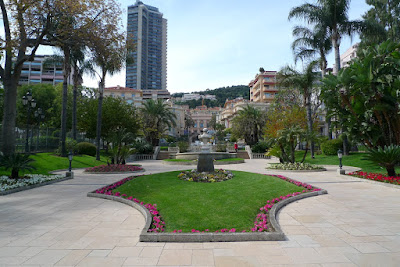 this side of town, upside down. The hilly terrain is actually a part of France - the town of Beausoleil.


In the Casino Square Garden 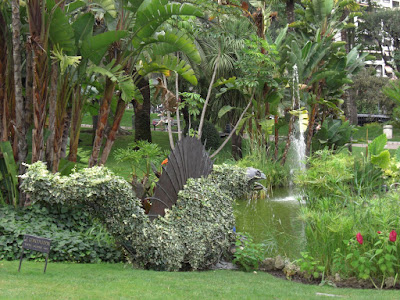 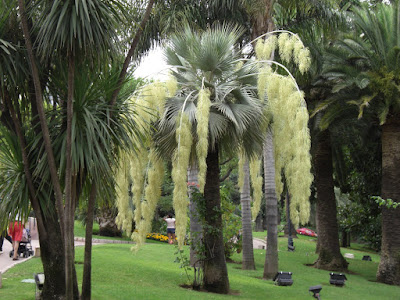 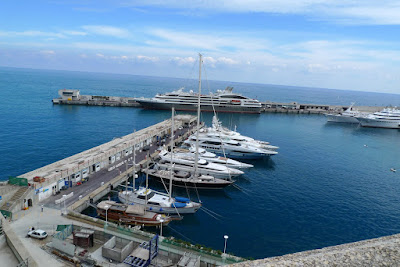 The Port of Monaco is a popular destination for cruise ships.
Cruise ships dock on Monaco Bay to give their passengers a day to tour. Walking along the coast, shopping, eating are all part of the experience, too.
Whether you came on a cruise ship or on your own, there is so much you would want to see in one day.  After a quick breeze through this town, perhaps, you will come back someday to attend a ball, go to the casino, attend the Formula One Monaco Grand Prix, the Monte Carlo Masters Tennis Tournament, spend time in the beach resorts, or just come back to explore at a leisurely place. Until then, let's think about the next destination to visit.
Posted by yolanda at 09:08