Welcome to the south of France, also known as the French Riviera (Côte d'Azur). It is the French Mediterranean coast made famous by Monaco, Cannes, St. Tropez and the less glamorous places like Eze, Antibes, Cagnes sur Mer, Villefranche sur Mer, Nice and other scenic coastal towns. 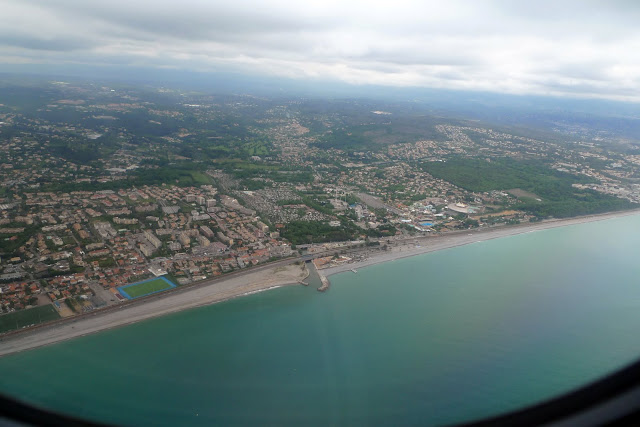 When traveling by air, the gateway to the south of France is Nice. The landing approach from the Mediterranean Sea gives you a chance to get a breath-taking aerial view of the French Riviera, on a clear day. 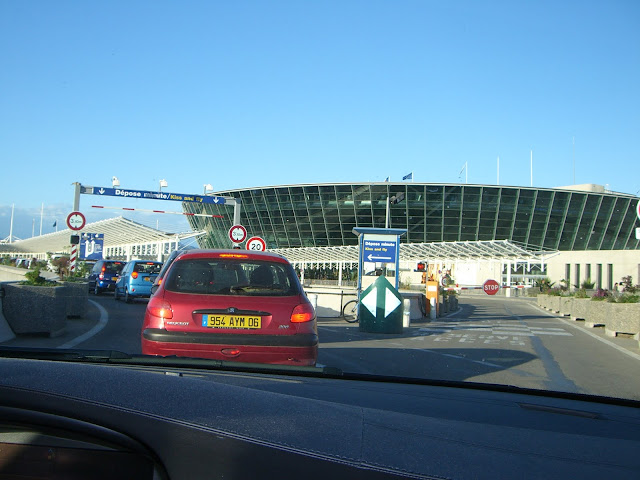 Aeroport de Nice Côte d'Azur
Daily flights from Paris are scheduled to arrived here every half hour. International flights from major European cities, Moscow, New York, North Africa and the Middle East bring in the added international tourists, with Nice as their point of entry or their final destination.


Once out of the airport, you can either choose to go to the center of town by train, or by airport express bus. If you will be staying at a hotel, inquire about their shuttle service from the airport to the hotel. Avoid taking the taxi which can be very expensive, especially when you are given an unrequested tour around town. If  you have a car, you can go on the A8 autoroute or take the coastline thoroughfare to enjoy a leisurely drive, with the coastal view of the city of Nice. 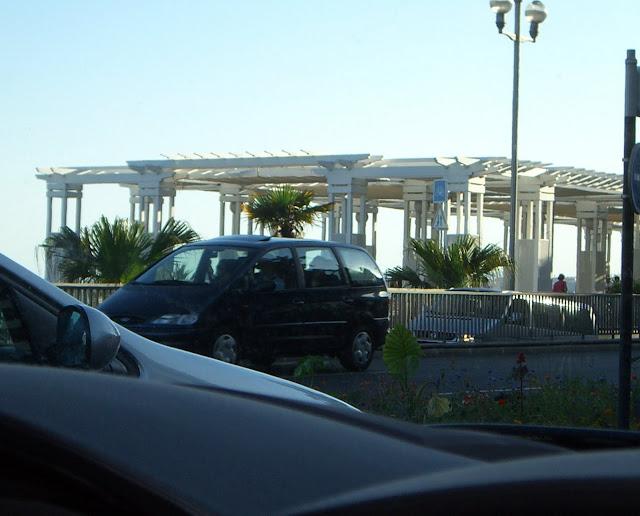 Park somewhere and have a lovely walk on the Promenade des Anglais, the beautiful waterfront. 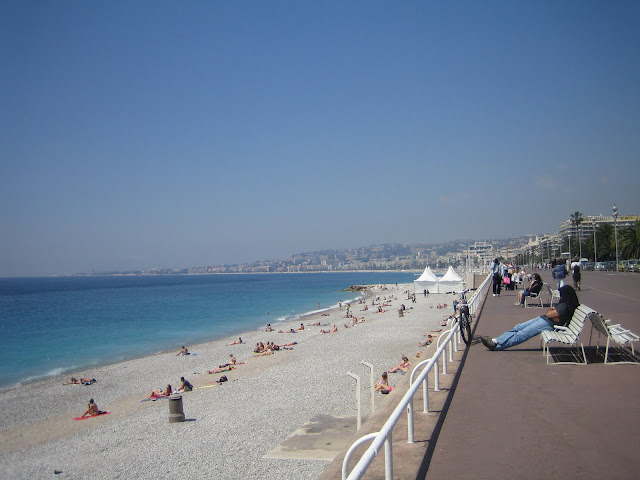 It's a long stretch and you have a choice of being on the beach or on the concrete, waterfront walk. Where ever you go, be sure to keep an eye on your valuables, better yet, don't take them with you. Sadly, there are those who prey on the tourists. Access from the palm-tree lined main street and sidewalk to the beach is to go down on a set of steps, just like this. 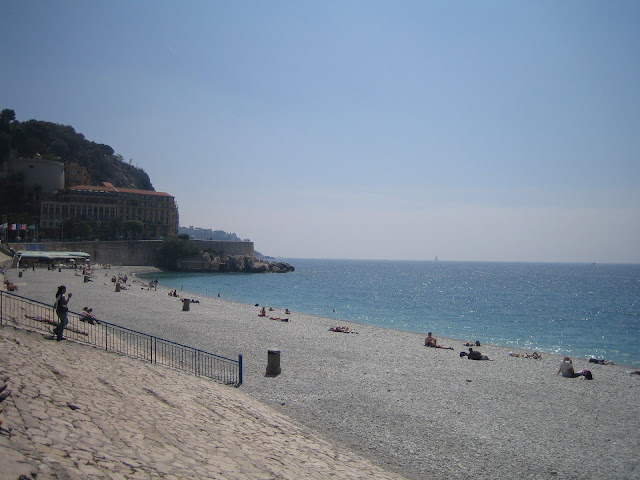 Be prepared for your walk on the pebbly flat stones, a mat to lie on for sunbathing, or a cushion to sit on,  just next to the azure blue waters of the Mediterranean. This is the French Riviera where half-nude sunbathers or swimmers are part of the beach scene. 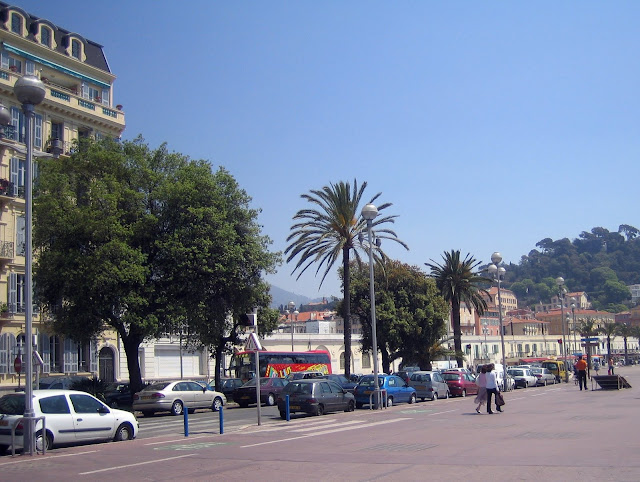 When walking on the wide sidewalk next to the beach, the buildings and business establishments like the hotels restaurant, museum, shops, and the market (the lower-rise building) are all waiting for your patronage. Depending on your travel budget, there is something for everyone.

I like visiting markets, anywhere I go. Here we are at the famous Nice market - 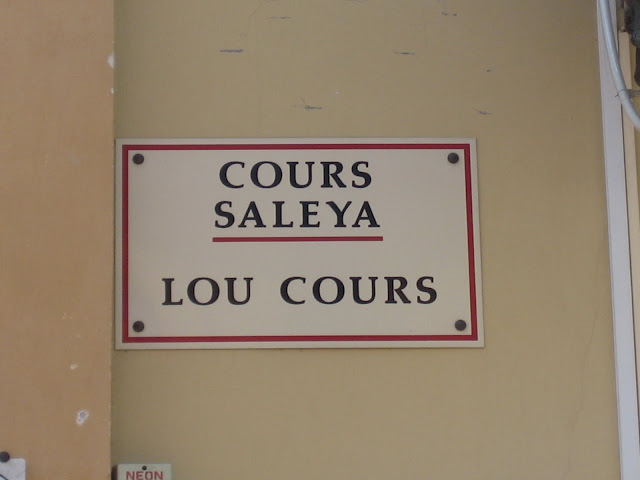 along the Cours Saleya in Vieux Nice (Old Nice)... 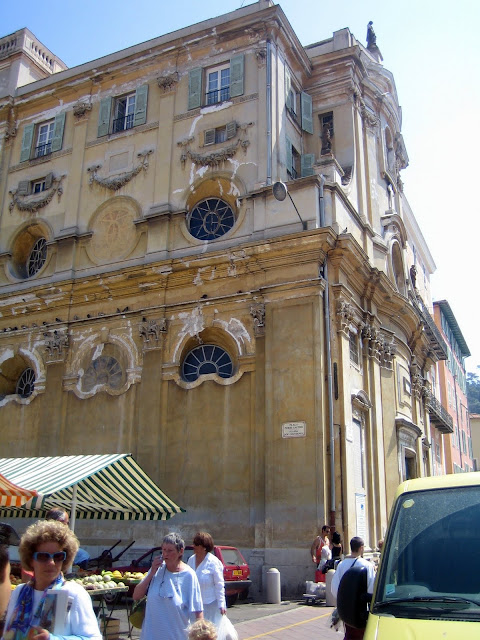 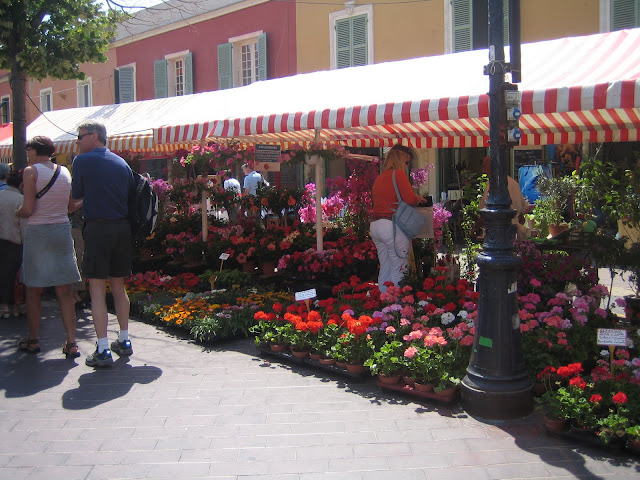 Set up under the tents, the main attraction is the flower market... 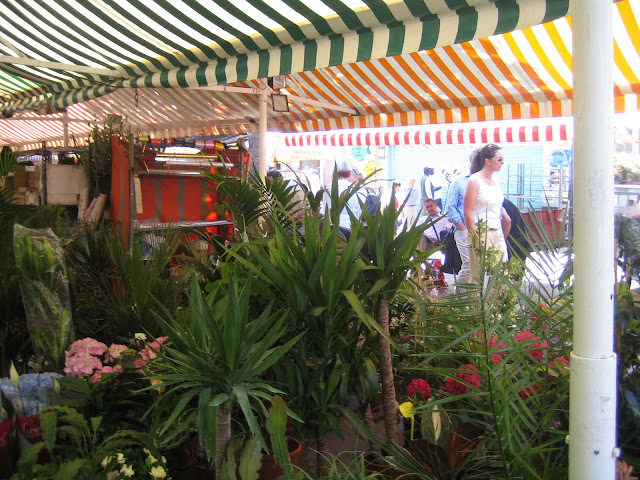 plants  for indoors or outdoors... 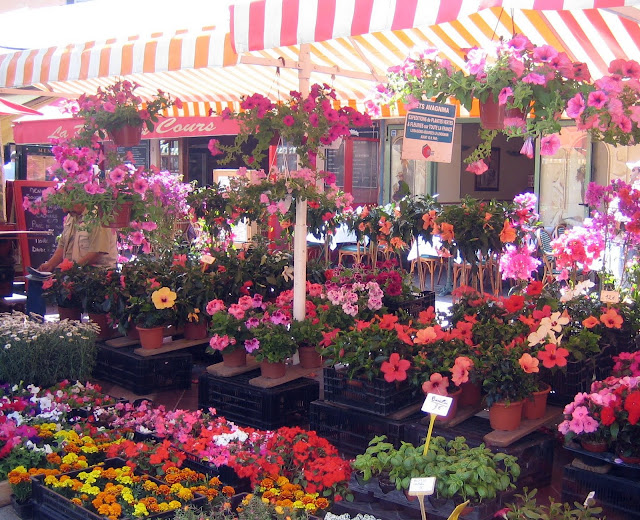 and more varieties of flowers and plants for spring color. There are also stalls selling cut flowers, with services for providing floral arrangements for special occasions. 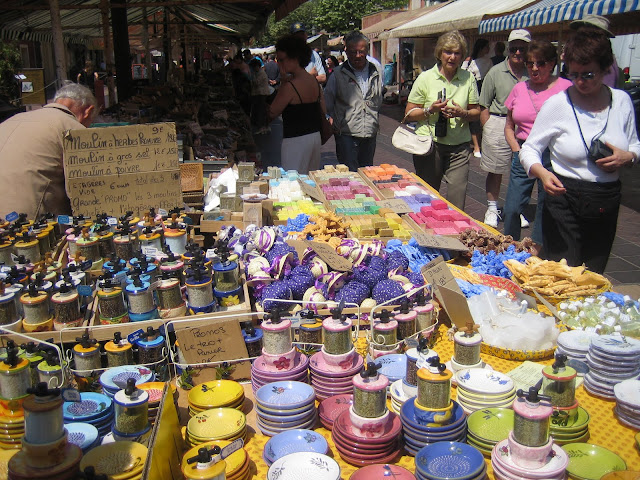 Plus other things - spice mills, spices, marinated olives, fresh fish, pastries and bread, pre-cooked food. There is a small food court under the tents. 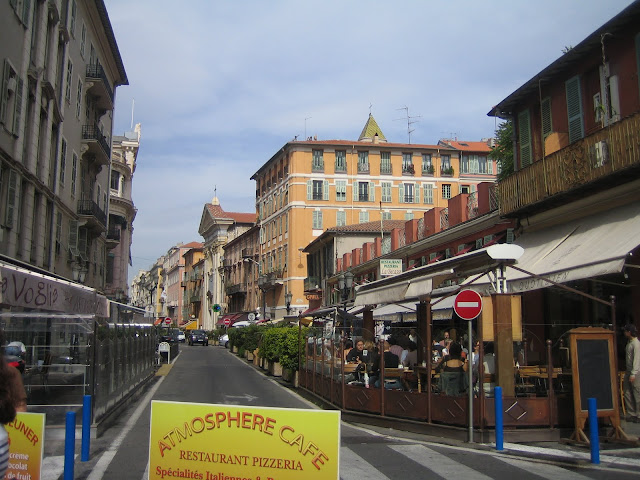 Around and near the market area are more eating places, with a price range of moderate to moderately expensive; and more shops, boutiques, and cafés. 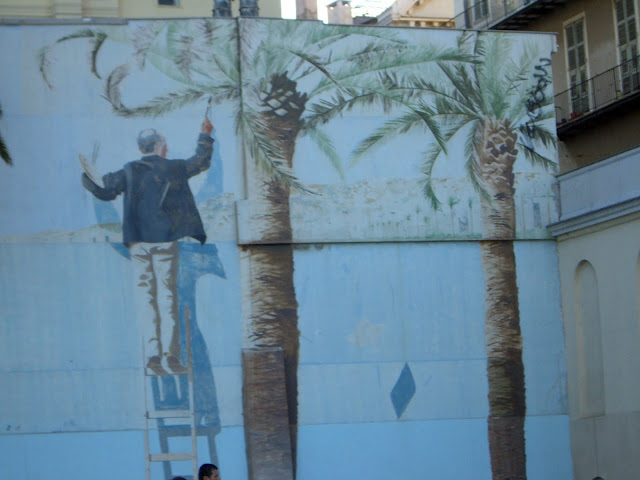 Turning around by the Nice harbor and heading back on the other lane, this wall mural caught my eye. 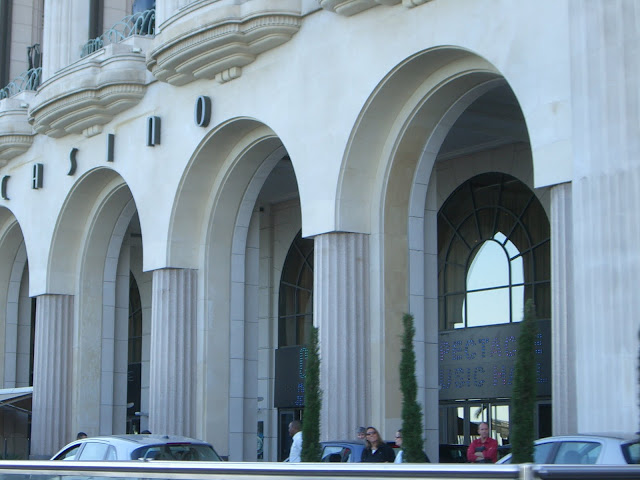 On the coastal road, there is a casino. If you are inclined to playing, be sure to set a budget and quit when it's all spent. Or, quit when you are ahead. This place can be fun or catastrophic for your wallet 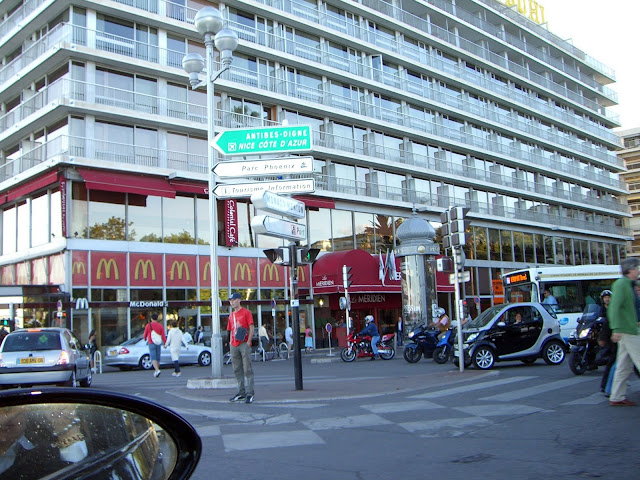 That logo sure looks familiar! 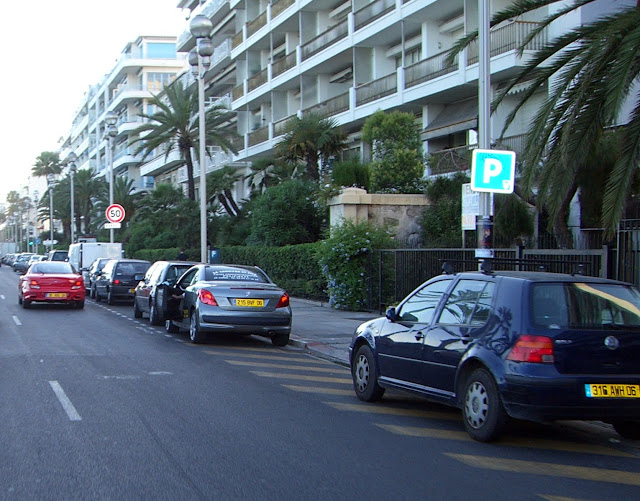 This coastline beach attracts thousands of tourist each year.  Because of this, there was a hotel construction boom sometime ago. The architectural style became more streamlined and functional after the II World War ended. 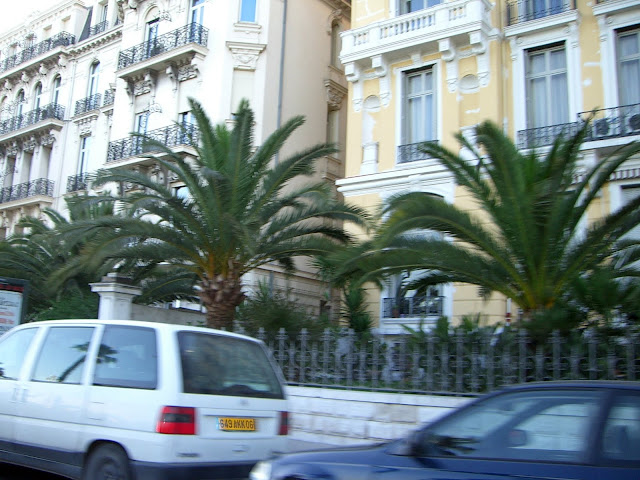 Juxtaposed with the older buildings in Beaux Art architectural style, 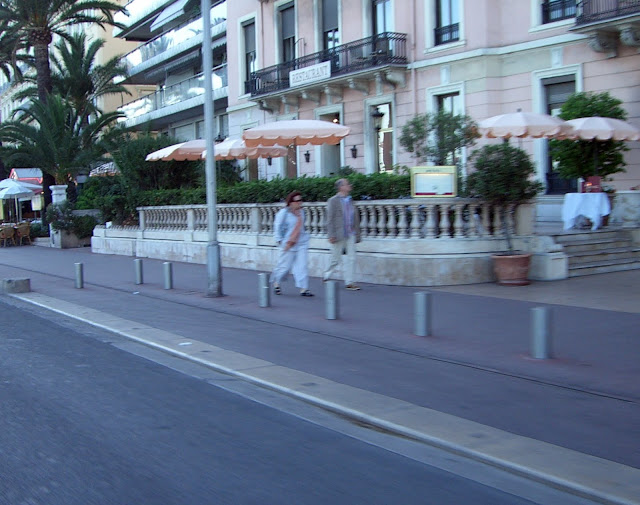 the street row of buildings took on an eclectic look. 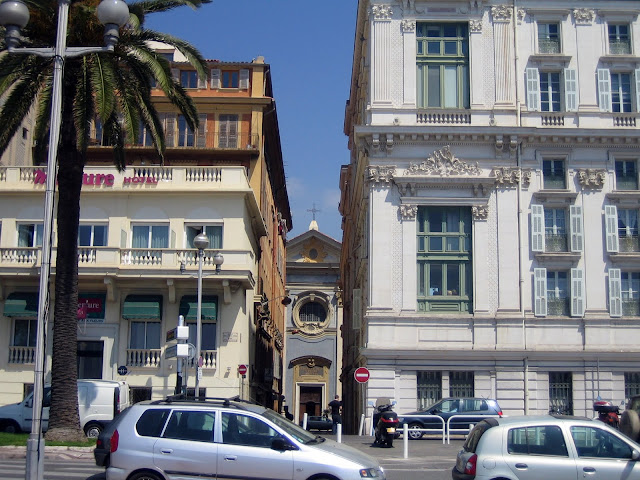 It's a mixed zoning - business and residential. 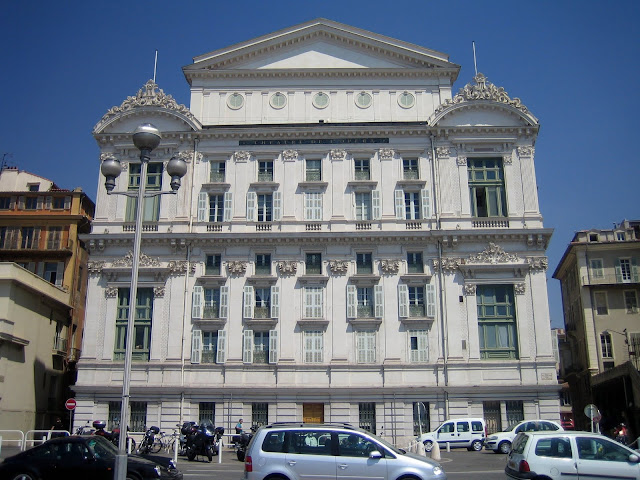 This is one of the most beautiful residential buildings. 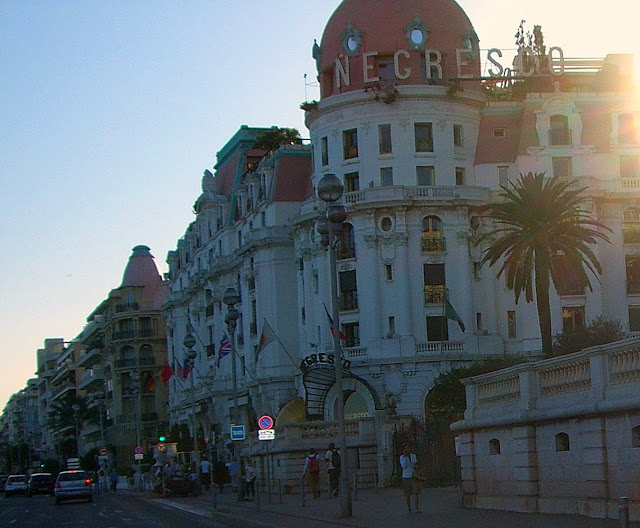 Hotel Negresco boasts of an interesting history and elite clientele.

It was in 1893 that a young Romanian, Henri Negrescu, son of an innkeeper and a Gypsy violinist, made his way to Monaco. He worked in the restaurant industry and eventually his hard work paid off. He became a director of the restaurant, Helder. He also developed a loyal following of people in high society. He moved to Nice to manage the restaurant at the Municipal Casino of Nice and the Casina of Enghien-les-Bains. His work in these prestigious places afforded him the opportunity to meet his future investor - Alexandre Darracq (1859-1928) and the Dutch-French architect - Edouard Niermans (1855-1931) for his ambitious hotel project. To complete his team, Niermans chose Gustave Eiffel (1832-1923) to do the metal framework of the proposed glass dome - the Salon Royal. The size of this  project was history making in the French Riviera.

Finally, Hotel Negresco opened to much fanfare on January 8,1913. It attracted an international clientele of heads of states, members of the European royalty, and famous socialites. It was acclaimed as "the most sumptuous of luxury hotels."  It's success came to a halt when the the first world war broke out (1914-1918), Henry Negrescu, who was a "Knight of the Legion of Honneur" offered his hotel to be used as a hospital. He unselfishly paid for the running and upkeep of the hundred-bed hospital with his own money. When the war ended, Henri was broke and he died in Paris in 1920.

After it was bought by a Belgian company, it continued to be on a slump. In 1957, Monsieur Mesnage and his daughter Jeanne, took over the hotel. Jeanne, who was to become the wife of Maitre Paul Augier, had passionately envisioned bringing the great stages of French art with a collection of fine art to adorn the hotel for the guests. And she did!  Madame Augier, with her artistic flare, continues to add to the art collection and heritage of this place.

The hotel has been used as the setting in several movies. It was a favorite destination of the rich and famous during the winter season. It has undergone renovations in keeping up with technological advances. The façade, the lobby and  the Salon Royal have been fully restored. Hotel Negresco is now listed as a historic monument. A visit to this historic hotel will bring you back to the days of grandeur, dating back to almost a hundred years. 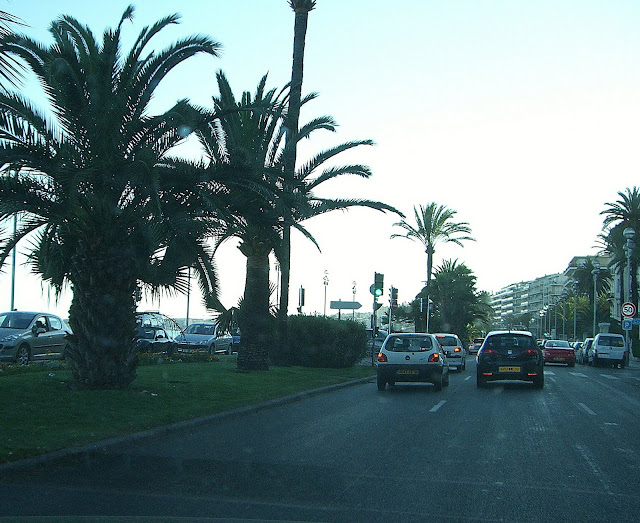 Driving in Nice can be circuitous, due to the one way flow of traffic in some streets. 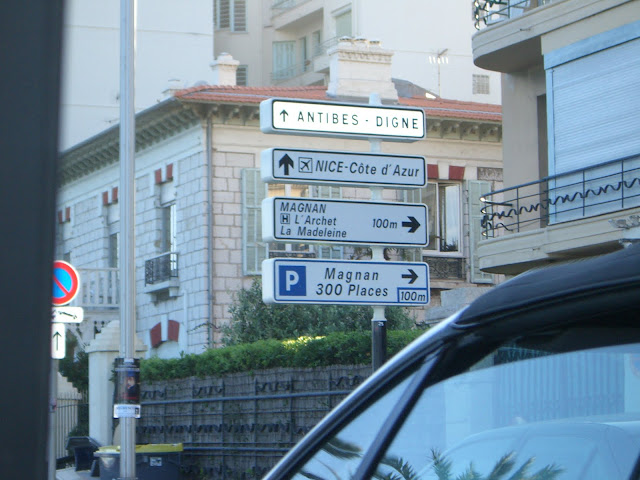 If you miss a turn or lose your bearings, it's easy to get back on track with  signs like this, especially when looking for a parking lot. But do have a map - it's always handy.

We have just gone up and down the coast. There are other places to visit inland, like the museums exhibiting the works of Chagall, Matisse, and other artists. There are churches and other historical landmarks. On the roundabouts are interesting sculptures that, sometimes, make you think.

From Nice Cote d'Azur, you can make side trips to the celebrities' destinations along the Mediterranean coast or visit Grasse - the center of the perfume industry; St. Paul de Vence and Eze Village - medieval villages; or Villefranche-sur-Mer - a fishing village.

I wish you a delightful journey to the south of France.
Posted by yolanda at 01:57