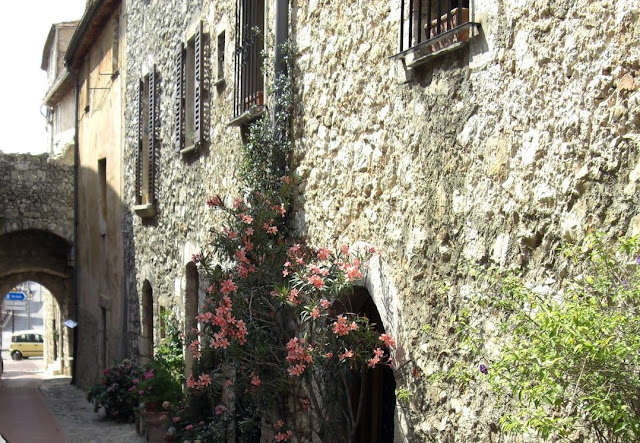 Driving around in the south of France can lead you to some interesting discoveries. 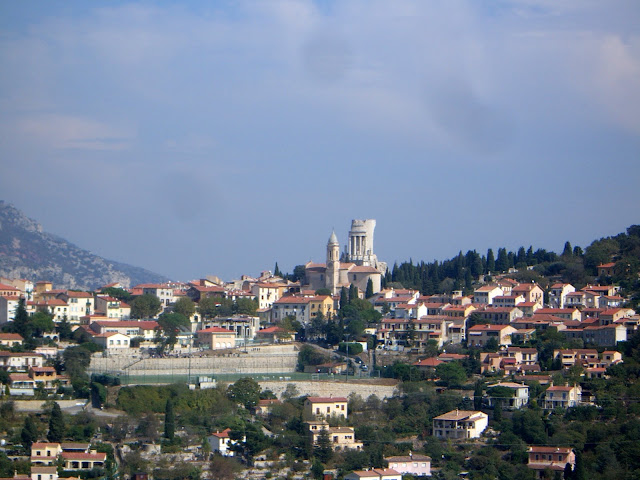 When heading to the village of La Turbie  from Eze - the place that garnered headline space when Princess Grace of Monaco figured in an accident on September 13, 1982, that cost her her life, a Roman trophy is unavoidably noticeable as you travel the winding road on the Grand Corniche.


La Turbie is located on the Alpes Maritimes, close to the Italian border, with breathtaking views of the hills, the Mediterranean Sea and overlooking Monaco.  The medieval village of La Turbie grew around Le Trophée d'Auguste (The Trophy of Augustus) which was built by the Romans in 7BC. 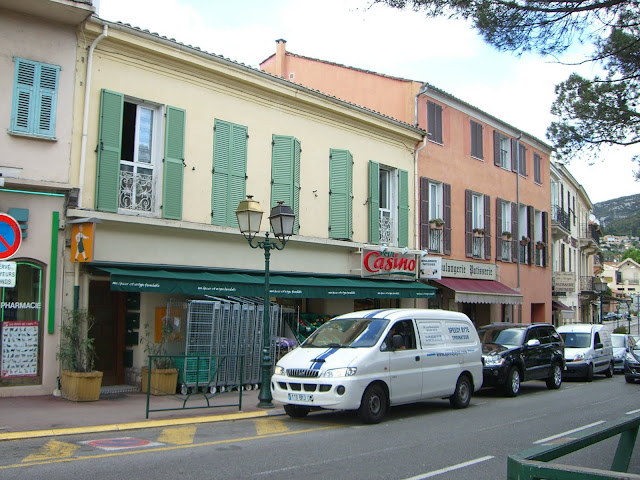 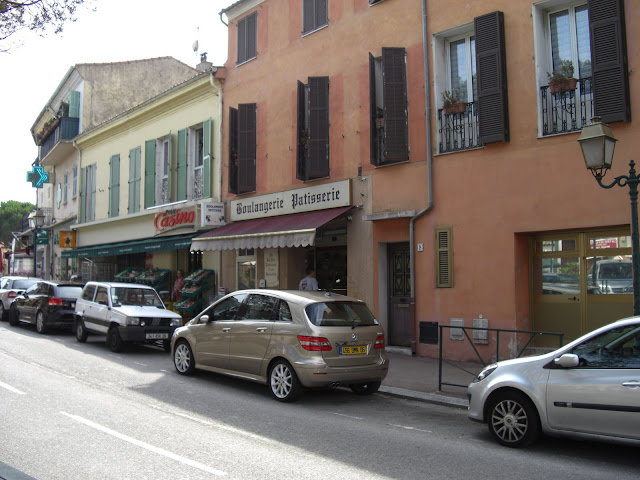 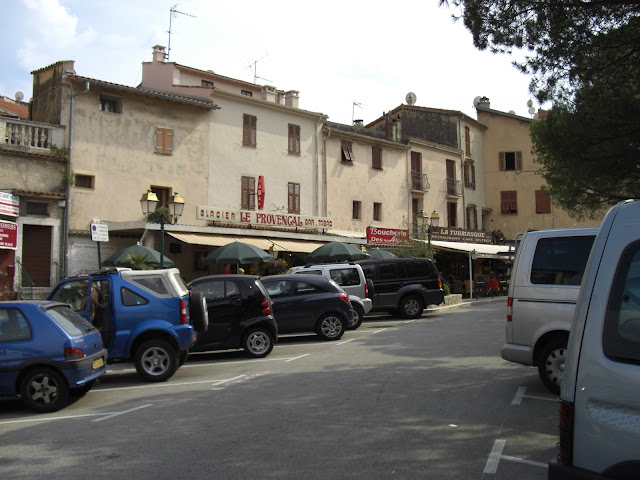 In the quaint little town center of La Turbie is a series of stores and other business establishments that will take care of the many needs and capricious whims of both the local inhabitants and the tourists. 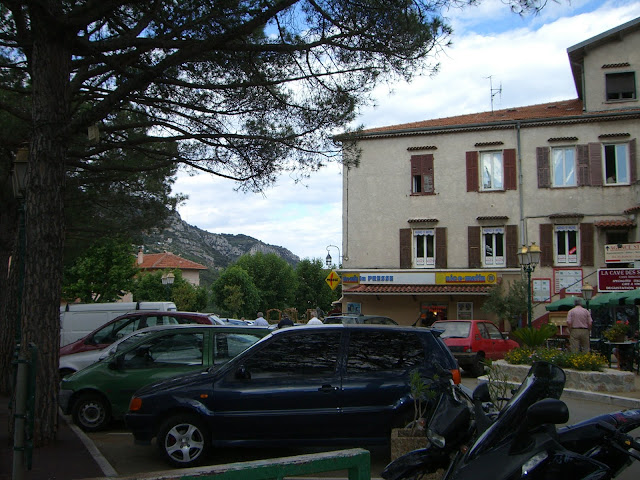 The shops are close to one another, easily accessible by foot, after you park your car. 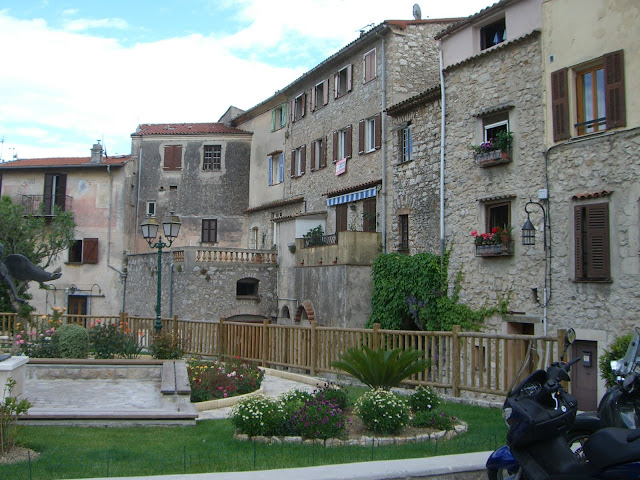 Your time will be wisely spent just leisurely walking from place to place, including exploring this little town. 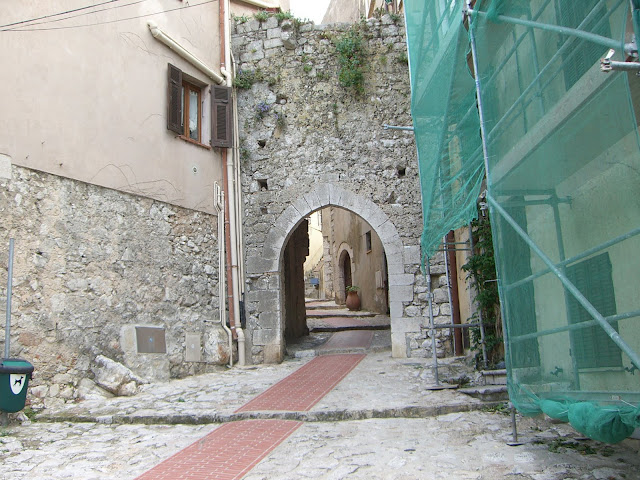 Still inhabited today, these living spaces - which are right behind the town center, are beautifully preserved with a provençal-style façade. 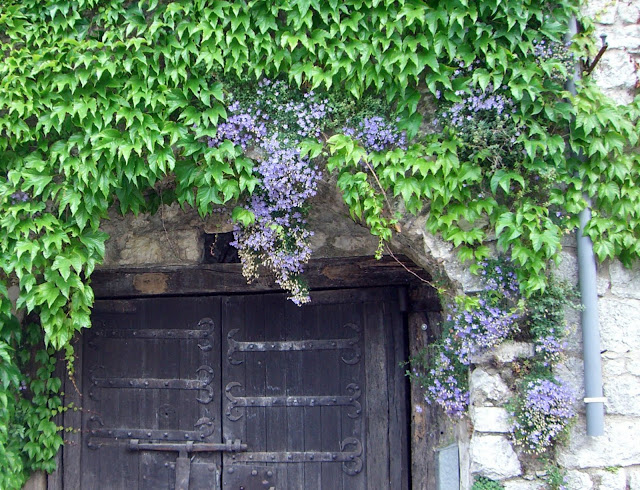 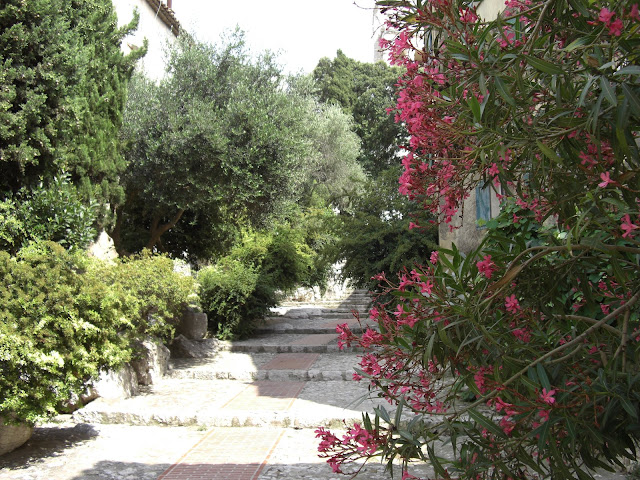 Some doorways and pathways around this walled city are lined with flowering plants and trees, giving it a bit of green landscape inspite of the limited area. 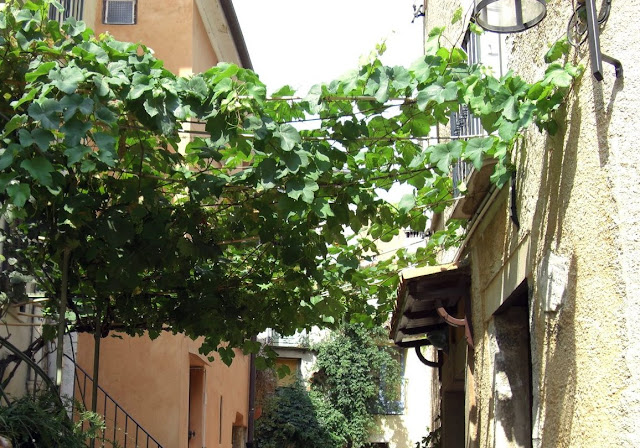 Some one figured out how to grow a grape vine, attaching wires from the wall of their house to the house across. 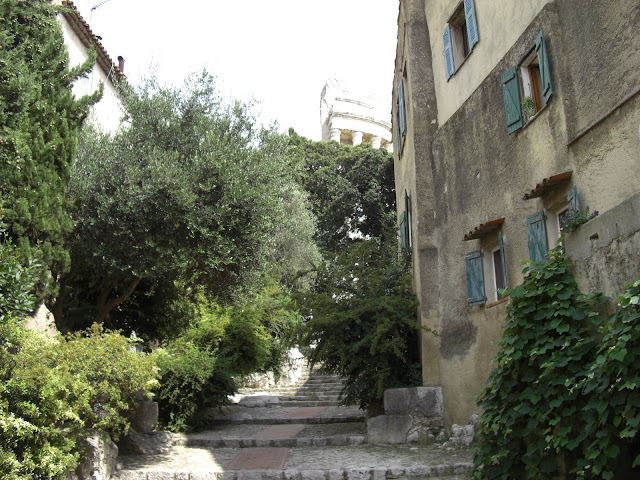 From many points, the Roman trophy can be seen, literally in the backyard of this neighborhood. 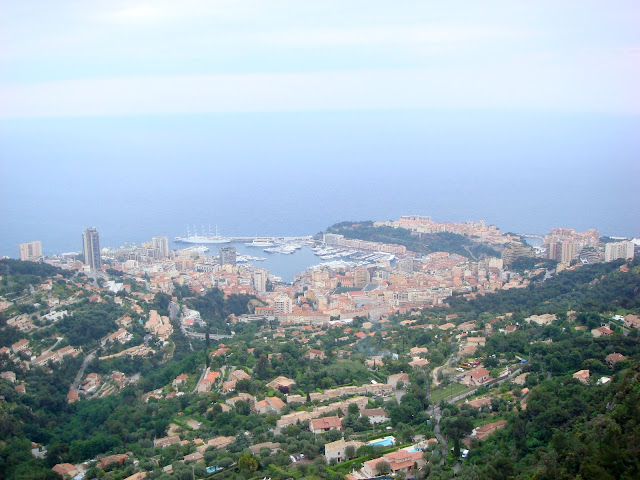 This is a view of Monaco at the end of a scenic road that leads to the entrance of the monument, so inviting to be visited, next, as it sits on Monaco Bay. Monaco, though not a part of France, is only a couple of minutes away and is a famous destination among the rich and famous jet setters, and the curious tourists. 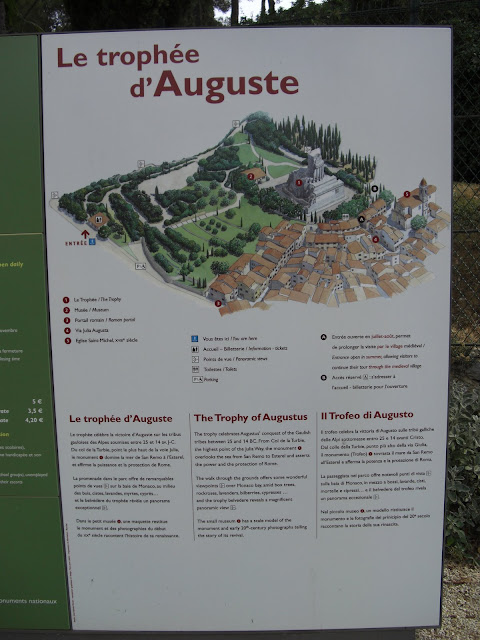 The Trophy of Augustus was a monument built to honor Augustus' triumphant exploits.

During the Middle Ages, this monument was redesigned to be used as a fortress. In the 1705, Louis XIV successfully blew up this place, for reasons unknown to others. At the start of the 20th century, it was crumbled and reduced to an unrecognizable pile. Some of the limestone blocks that scattered on the ground were used to build the eighteenth century church of St. Michel for the village.

From the 1913-1915, the Herculean task of rebuilding what was once a magnificent  monument was undertaken by Jean-Camille Formigé, with the funds donated by an American benefactor, Edward Tucker . The restorers succeeded in rebuilding part of what this monumental trophy must have looked like, originally a "circular pantheon design with a pillar-supported dome and set on a gargantuan slab-base." 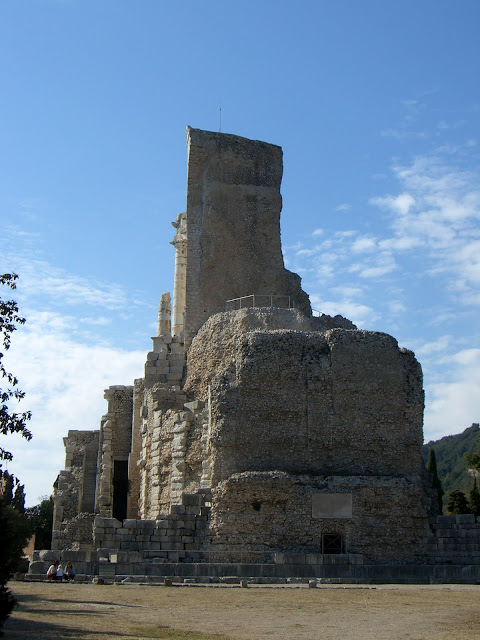 Also known as the Trophy of the Alps, the trophy was erected on a paved foundation, situated on the highest point where the Alps meets the sea. It is a spectacular view from afar, and up close it rises to a height of 36 meters, today. 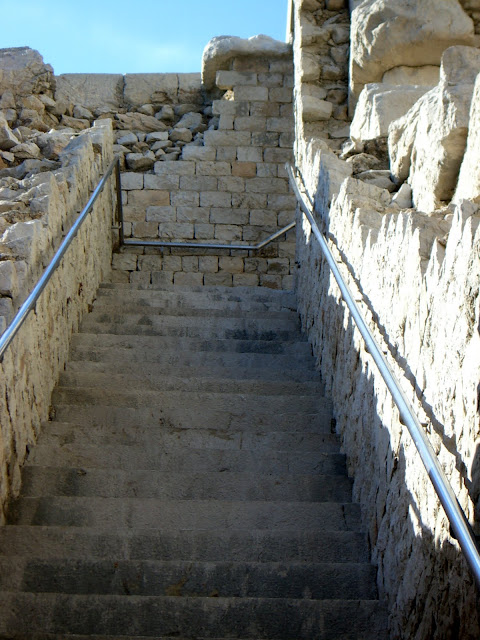 The interior structure was re-built with limestone blocks. 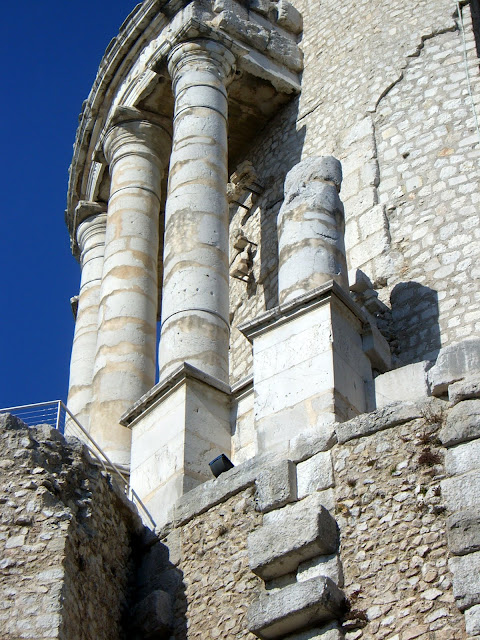 The cylinder shaped design at the top had pillars which provided foundational support for some of the twenty four columns that were rebuilt on the circular floor plan, sans the dome. The round, cylindrical shape is called an aedicule. It was originally built with a staue of Augustus set on the top part of the dome, then, estimated to be about 50 meters high. On the left side, bottom corner is the railing of the stairs that visitors take to get to the top to get a panoramic view of the land, the sea, and the sky. 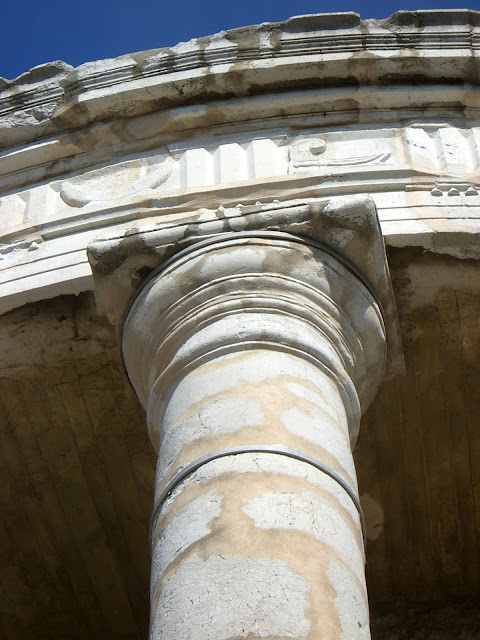 Designed on the popular and classical architecture of the Greeks, the columns were made in doric style - simple and strong. 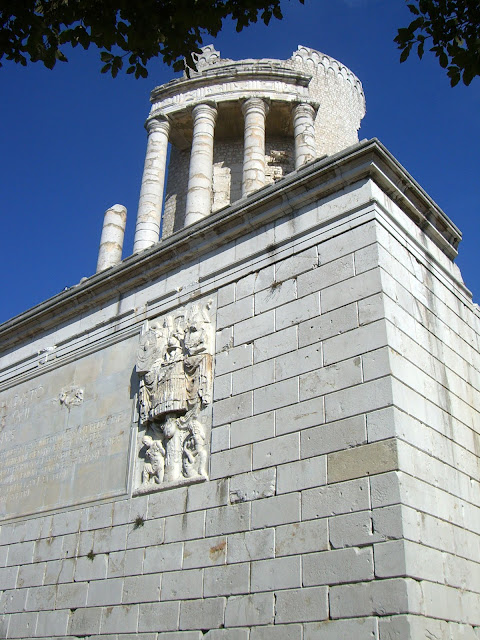 The material used for the sculptures, capitals, and inscriptions was Carrara marble.

A pair of this bas-relief (low-relief) adorn both sides of the inscription. These sculptures represent the "trophy of arms with two barbarians in chain at the bottom, and "the vanquished and the subjugated." 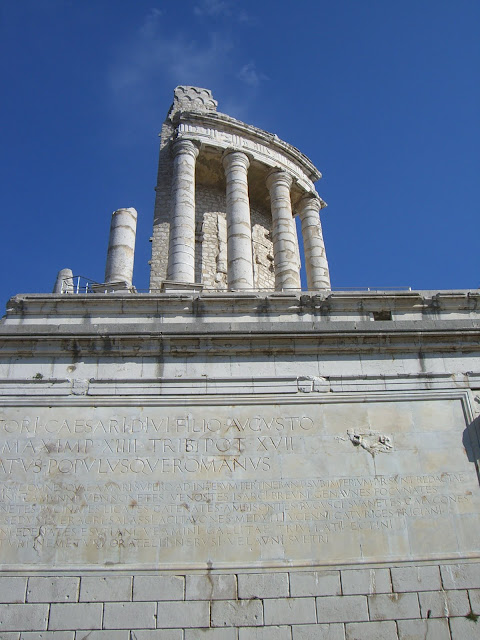 The inscription reads "To the Emperor Ceasar Augustus, son of the divine Julius, Pontifex Maximus, proclaimed emperor for the 14th time, and invested with the seventeenth Tribunician Power, from the senate and Roman people, because under his leadership and auspices, all the Alpine people from the Upper Sea (the Adriatic) to the Lower Sea (Tyrrhenean) have been subjugated to the power of the Roman people." The monument was restored facing Gaul (France). 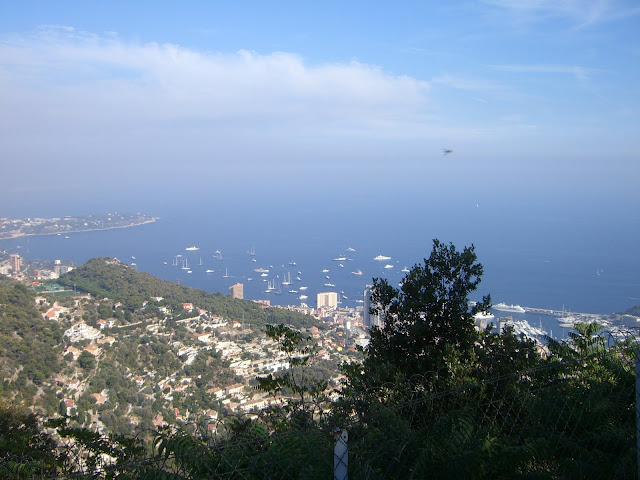 As beautiful as this place is, I cannot help but reflect on its history, imagining the fate of the vanquished and the subjugated, perhaps, so barbaric and gruesome. And yet, today, it is the beauty of this place that stands out in our travel diaries.


From here, the next stop is what you see below from the view up in the trophy, Monaco.