The Veneration of the Crown of Thorns, Notre Dame de Paris, France

The relics of the Passion of Christ at the Notre Dame de Paris - including a piece of the cross, two nails and the Holy Crown of Thorns - are presented to the public for veneration, every first Friday of each month and every Friday during Lent, at 3:00 p.m., and on Good Friday from 10:00 a.m. to 5:00 p.m. 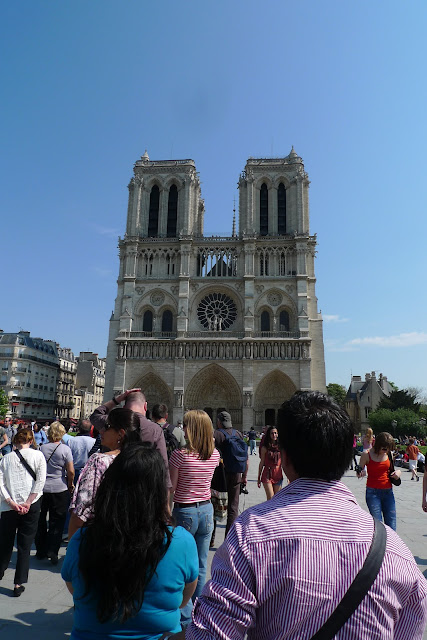 This practice unifies the believers in the faith contemplation on the mystery of Easter, which is the basis of the Christian faith.

Last Good Friday, that's what we did. We went to the Notre Dame de Paris and stood in the longest line of tourists, pilgrims, and penitents, to enter the cathedral. This experience added another dimension to our observance of holy week. 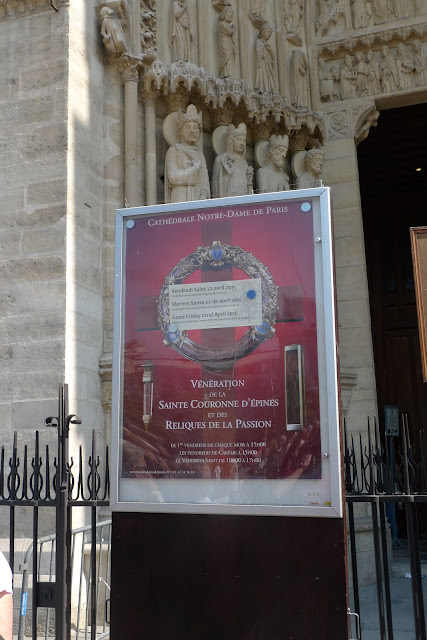 We started off at the beginning of the parvis and were inside in 15 minutes. It was a warm, sunny day and thank God the line moved swiftly. 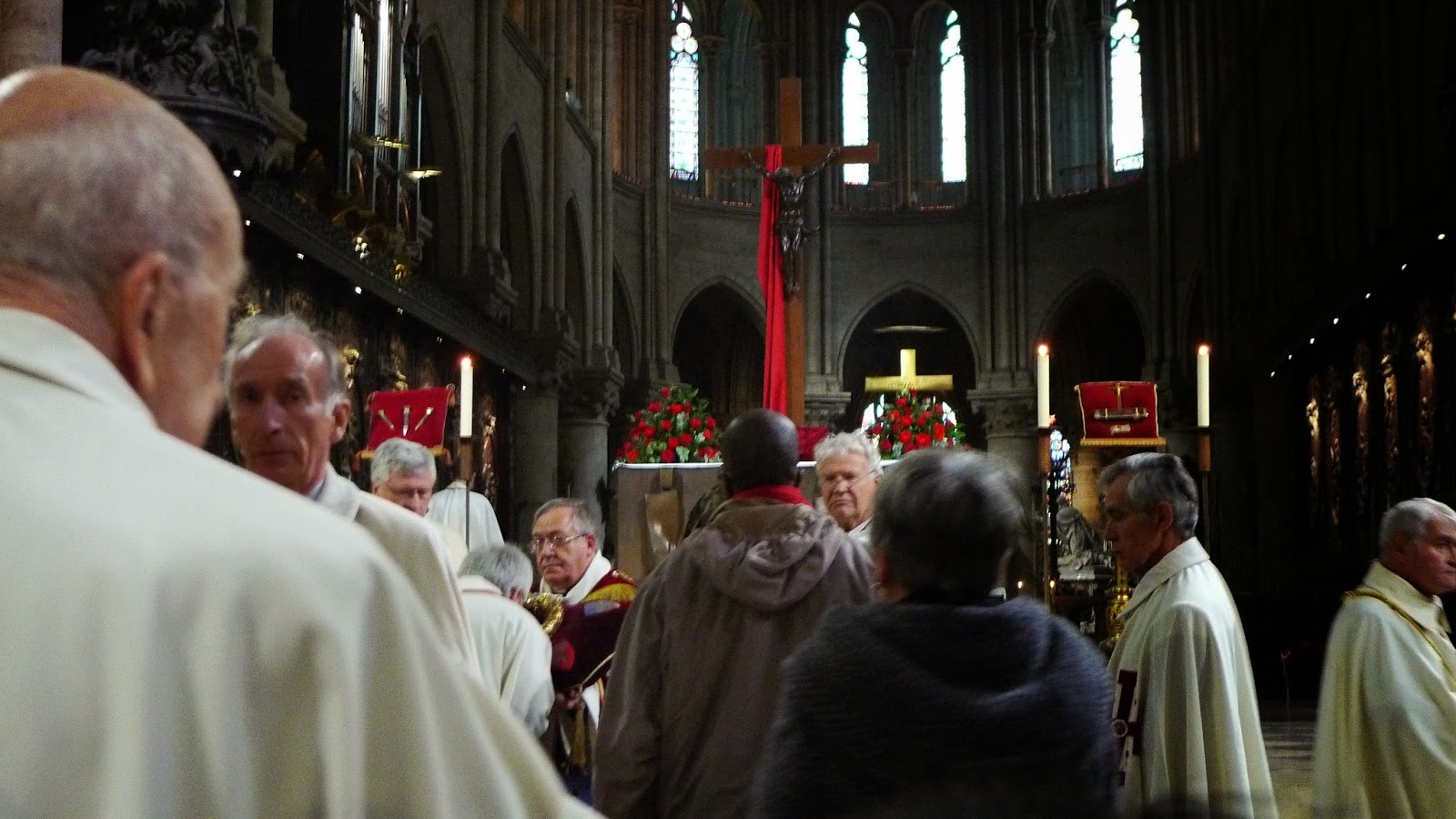 The center aisle was lined up with people who came to venerate the Holy Relics.

By the time we got to the front of the line, each of us got the chance to kiss or touch the glass reliquary encasing the Holy Thorns, with the Knights of Malta assisting people who came for this occasion. Contrary to how the crown of thorns has been portrayed in pictures and in the movies, this one was  from a very thin, thorny vine.

Do you believe that this is the real Crown of Thorns that was placed on Jesus's head, from the crowning of thorns to his crucifixion? Some writers of the the first six centuries A.D. made mention of a relic that was in existence and was being venerated. After the year 409, St. Paulinus of Nola referred to the relic as " the thorns with which Our Savior was crowned" and venerated in Jerusalem since the fifth century for several hundred years. Antonius of Piacienza (6th C.) indicated that it was in the church on Mt. Zion.

It is recounted that parts of the original Crown of Thorns were in the possession of several powerful people. For instance, Justinian the Great, the Eastern Roman (Byzantine) emperor who died in 565, had given a thorn to st. Germain - Bishop of Paris. The whole Crown was transferred to Byzantium around 1063.

In a political move, Baldwin II, the Latin emperor of Constantinople, offered the Crown of Thorns to King Louis IX of France in 1238, to gain support for his weakened empire. It was redeemed from the Venetians who had it as collateral for a loan of 13,134 gold pieces and sent to Paris and was received by King Louis. He had the Sainte Chapelle built, which was completed in 1248,  to house the holy relic.

La Sainte-Chapelle is an example of Gothic architecture in the Rayonnant period - a shift from the grand scale, spatial relations previously found in the other cathedral designs, like in Chartre, towards "two dimensional surfaces and the repetition of a decorative motif " (ca. 1240 - 1350).  Aside from the Crown of Thorns, it also housed many religious relics in the possession of King Louis IX.

The chapel's use came to an end during the French Revolution, at which time it suffered much destruction. The relics were dispersed and the relics of the Passion of our Lord were transferred to the Notre Dame.

Much of what you will see today, when you come to visit, has been reconstructed. Two thirds of the stain glass windows are original.  It's restoration in 1835 was under the direction of Eugene Viollet-le-Duc, who earned a reputation for his work in restoring medieval buildings, including the Notre Dame de Paris. 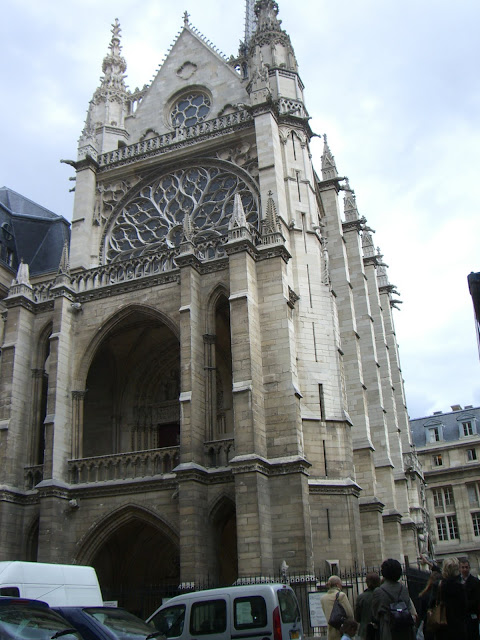 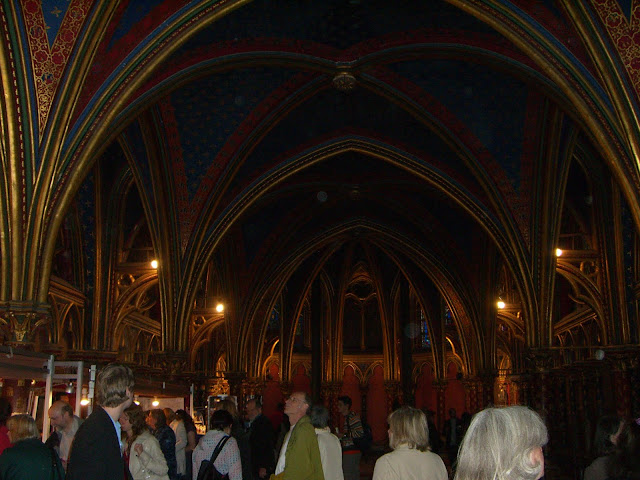 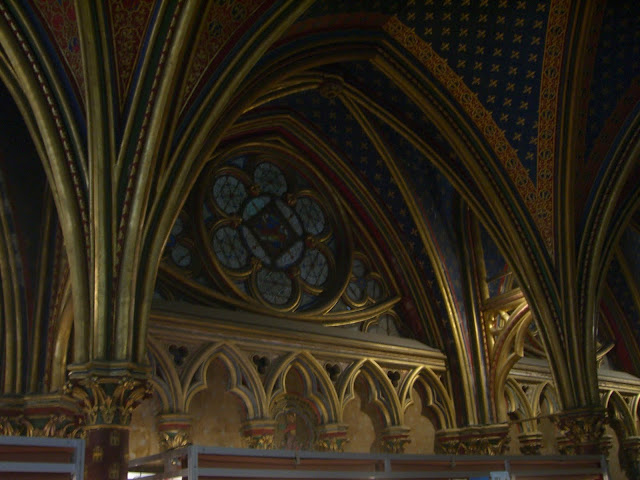 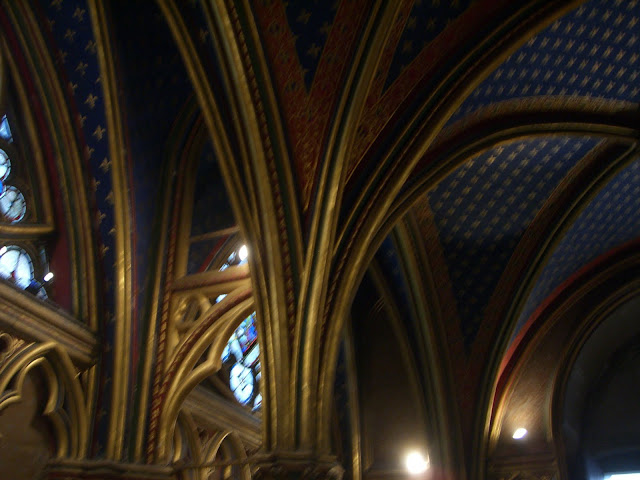 Inside the chapel, on the ground floor. 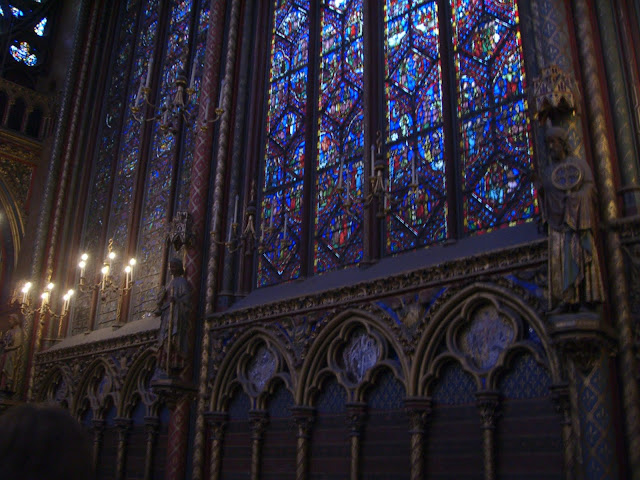 In the chapel, the lighting is kept dim on the second floor. It is the sun's light that brings life to the stain glass windows, which rise from the side walls all the way to the ceiling line. King Louis IX had a private room in the chapel, so as not to distract the other mass attendees. 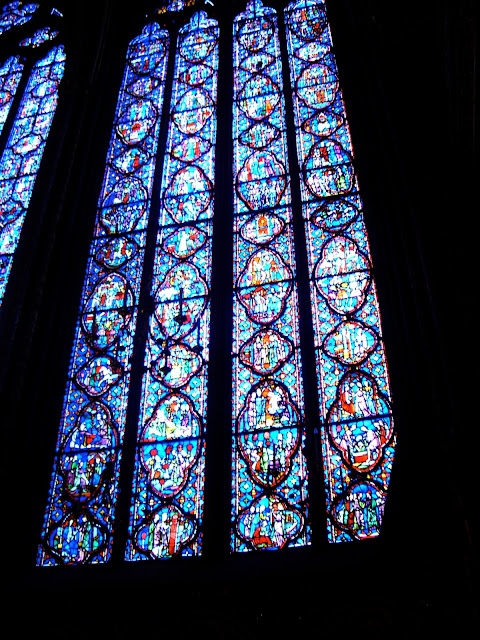 The stain glass windows depict the stories from the different books of the Bible. Primarily, that was the purpose for the window designs, to teach the faithful about the Bible. However, in the Book of Kings, the story was altered to include the kings of France 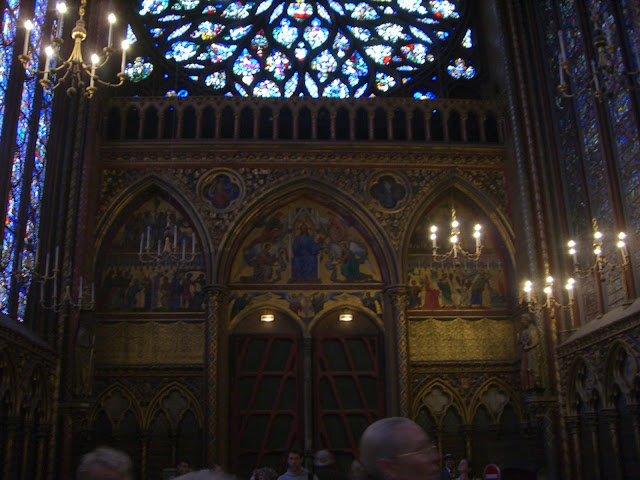 The entrance/exit doors on the second level 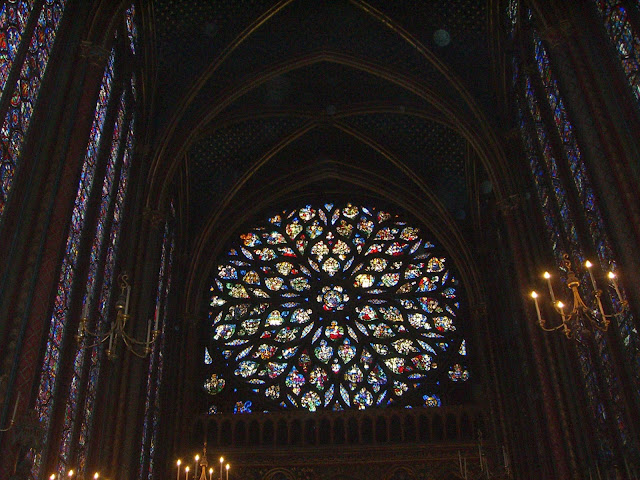 A close up of the rose window 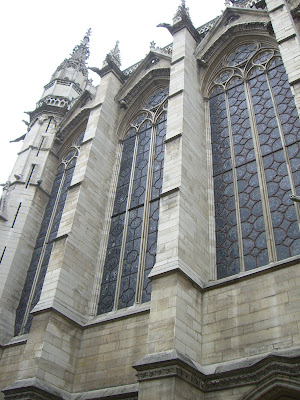 This is the outdoor view of the stain glass windows as well as the simpler architectural lines of the Rayonnant period. It may interest you to know that King Louis IX of France co-ruled with his mother. Later on, his mother maintained an advisory role during his reign. He led two crusades to the Holy Land - the seventh and the eighth. He reigned when France was at its height in europe, politically and economically.

King Louis was a devout Catholic and he took his role as "lieutenant of God an earth" seriously. He was known for his piety and his love, and for his service to the poor. He is the only king of France who was canonized.

As I look back at my experience, it really matters not to me whether this relic is the real Crown of Thorns or not. All I can say is that I was deeply touched and my tears just came uncontrollably.

May the blessings of Easter bring us peace and joy in our hearts, in our lives, in our world.
Posted by yolanda at 18:17