Gouda Cheese! Here in Holland, I got the chance to visit one of the Dutch cheese farm shops, Henri Willig.
We stopped by at the Alida Hoeve Cheese Farm in Volendam, a North Holland "cheese-cover farmhouse," and de Vriendaschap Wooden Shoe Factory. Both are open to the public, free of charge, with an explanation/demonstration of how milk turns into finished cheese products of Edam and Gouda, and others made from sheep and goats' milk, and on the other side a demonstration on the making of the Dutch wooden shoes. 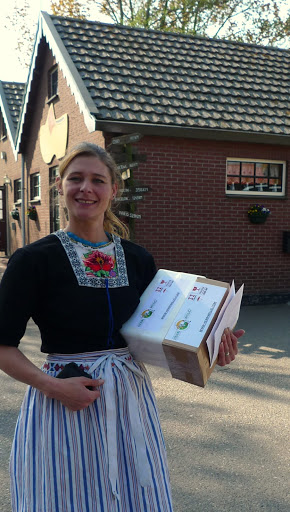 What a welcome sight after a long drive. This Dutch frau welcomed us with a big smile and an invitation to attend the demonstration. 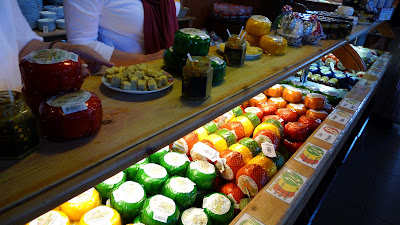 While waiting to go on the tour, we had some time to sample some cheeses.
Henri Willig has taken the dairy and cattle farm, Jacob's Hoeve, which he inherited from his parents in 1974, to new heights. "Hoeve" is the Dutch word for "farm." From a farming business, it is now also a tourist attraction with over a million visitors a year. A man of vision who wanted more out of what he had, Henri decided to take a course in cheese making.  By 1975, he was producing his own cheese products. With the farm, the polder (an area of low-lying land that has been reclaimed from a body of water and is protected by dikes) environment, and the windmills, before long the overall set up he had attracted some tourists. He got his first bus of visitors, unexpectedly,  knocking at his door for a tour and a visit.
In 1985, he had to recover from a fire that wiped out his farm. After a year, he rebuilt his first farm and added 3 more plus two other cheese-making facilities with machines he designed himself. His success is attributed to keeping his product quality consistent and in taking care of the visitors who enthusiastically visit and learn a bit more about Holland and his cheese products. He has set-up an online shop to ship to overseas clients for repeat orders. 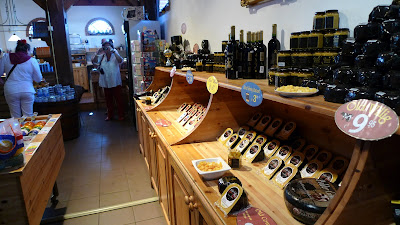 This is the section of aged cheeses, including those made from sheep and goat's milk. These were my favorite ones, and the ones I bought to take home. 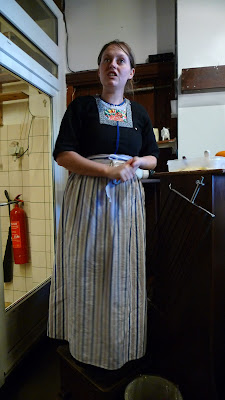 The demonstration is about to begin. The first step in cheese making is the daily gathering of milk in the morning from cows and goats, from different milk suppliers in the region. About a 100 liters is used to fill the vat. The resulting finished product will be 10%. 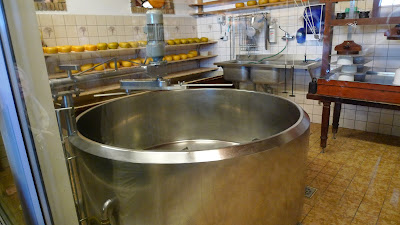 The milk is dumped into the stainless cylinder and warmed to 29°. Then, rennet is added.
Rennet is a milk enzyme that causes the milk to transform from a soluble state to an insoluble substance, as it digest the milk -soluble protein (casein) to coagulate it into it's insoluble form.  Rennet comes from the "abomasum" - the fourth division of the stomach in ruminant animals, such as cows, sheep, and deer, in which digestion takes place - in this case it is from a calf.
After 30 minutes, the special cutters cut through the milk with three special knives for the milk to separate, forming  whey and curds. The whey is given back to the animals to drink. After the whey is decanted, the curd is left in the vat and cooked further to 102°F for hard cheeses. 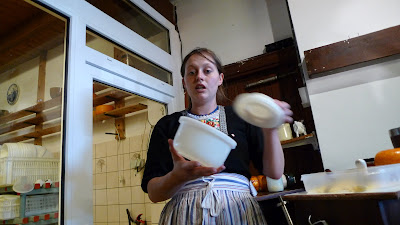 The cooked curd is packed into molds. 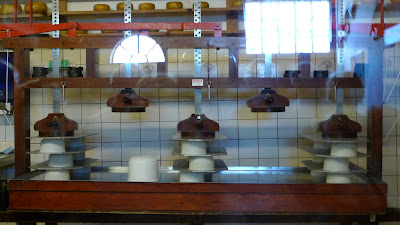 The molds are then pressed for about 2 hours, to knit the curds together, to form a more solid mass and to extract any left over liquid. 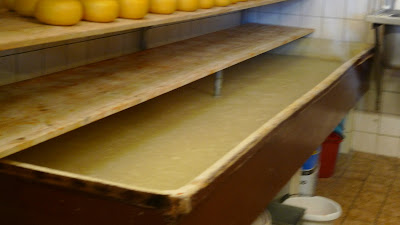 When the curd has turned into a ball, after it is unmolded, it is dipped into the salt bath -  20% salt and 80% water,  for a day. The salt is used as a flavor and a preservative.
The salted cheese balls are now left on the shelf, above, to dry for two to three weeks. When a yellowish rind has formed around the cheese ball, it is prepared for packaging. Each ball is dipped in liquid plastic, then covered with melted wax. 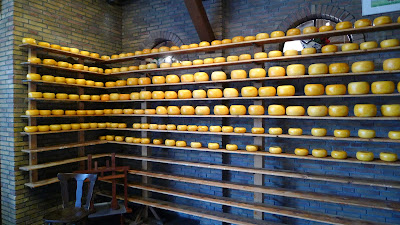 They are then left to cure on the shelves - one month for a young cheese, 6 months for a medium-aged or medium-dried cheese, and one year or more for aged cheese. 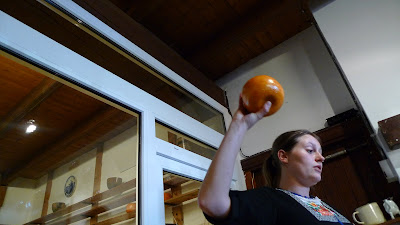 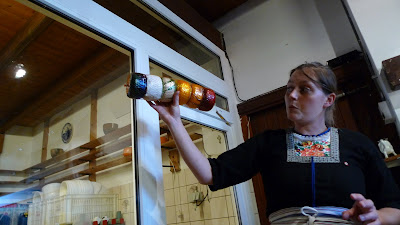 Packaged cheeses - the different colors indicate the flavors, the milk sources, and the aged varieties. Aside from Edam and Goudah, you will find plain cheese or others that are flavored  with various herbs such as cumin, pepper, fenugreek or chilli pepper. 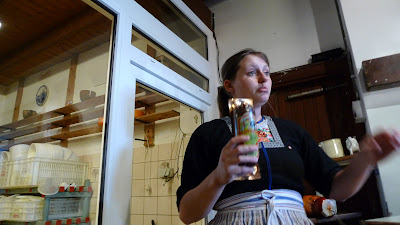 While what she is holding looks like a sausage product, it is actually a smoked cheese. 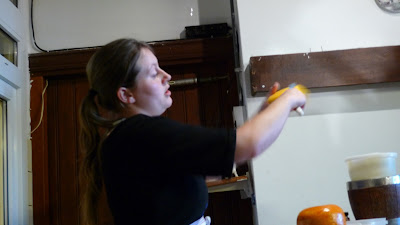 When opening a cheese ball, the best way is to peel it off with a cheese-slicer, by going around it until all of the plastic film/wax has been removed. With some crackers or bread pieces, the cheese is ready to be served. 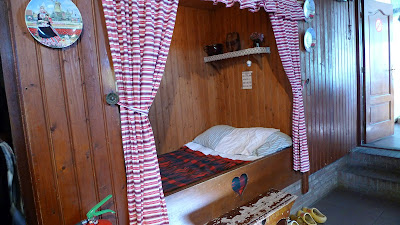 In the farm, the farmers are provided a place to sleep. It's simple and small, but big enough to get a good'night's rest.
If you have not been to Holland but want to try the cheese from there, you can always order online. Or, here's a link on how to make your own cheese. The step-by-step cheese-making details give you the option to have cottage cheese, too, as you go through the cheese-making process. This video will give you the visual aid to learn how to go about it. 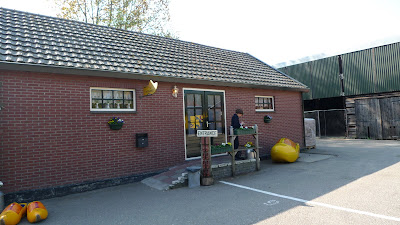 Here's the bonus to visiting this cheese farm. There is, also a demonstration on how those Dutch wooden shoes are made. 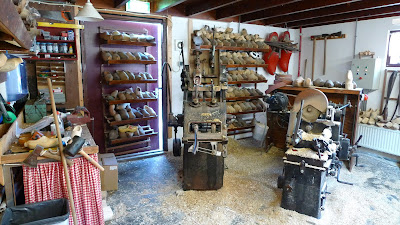 The machinery to make the wooden shoes - watch this video and see how it only takes 5 minutes to make a piece of fresh, green poplar block into a shoe by machine, while it used to take three hours by hand. 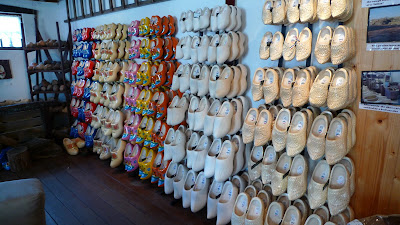 When shopping for a pair, remember that they are worn with a pair of woolen socks. To find the right size,  you will need a pair bigger than your regular shoe size - to measure, allow your finger to run around the back of your foot.


These pairs also make for nice souvenirs. They have been in use for the last 700 years. Those who wear this say that they are warm in the winter, cool in the summer,  aid posture, and the wood keep the feet dry as it absorbs the perspiration. They come unfinished, painted, or carved.


During the  medieval times, they were called klompen, because of the sound they made. Farmers, fishermen, factory workers continue to wear them. They provide protection for the feet from sharp objects or from getting their feet wet in the fields.


They are worn as part of the traditional Dutch costume for Dutch dancing -  Klompendanskunst,  which are made a little bit lighter. The dance is created by the rhythm from the tapping of the toes and heels on a wooden floor.


If you have worn Dr.Scholl's wooden clogs, it will probably feel the same. Too bad, I was not able to buy a pair. There was no room in my small travel bag. But, I am happy with my cheese balls!
Posted by yolanda at 12:10