Going to a church is somewhat like going to a museum, when you are sight-seeing. Take the case of l'Eglise de la Madeleine ( the Church of St. Mary Magdalene). On the onset, it looks like the Greek Parthenon was transported into the middle of Paris. Looking back at the history behind this place, we get to learn about some historical events, the social tone of the times, classical art, architecture, and the culture.

There were two attempts to build a church on this site. In 1757, Pierre Constant d'Ivry designed one that was based after the late Baroque style of the church at Les Invalides, with a dome rising above a cross structure. Construction begun in 1764 but d'Ivry died in 1777, and was replaced by Guillaume-Martin Couture, who decided to start over with another design.

Couture made one based after the Roman Pantheon. After the foundation was laid, the work was discontinued after the outbreak of the French Revolution. A debate arose as to what the use of the building was going to be.

In 1806, Napoleon I commissioned Pierre Alexandre Barthélémy Vignon to build something based on an old temple, sort of a hall of fame for the grand army - Temple de la Gloire de la Grande Armée. That did not get far either. This project was eclipsed by the plans for the Arc de Triomphe, which was to be a symbolic monument commemorating the triumphant return of the soldiers from the Napoleonic wars. This project came to a stop during the Napoleonic Wars.

After the French Revolution, came the Catholic reaction during the Restoration. King Louie XVIII decided that the site would be used as a church. Vignon died in 1828, with an uncompleted project, and was replaced by Jacques-Marie Huvé. And finally in 1842, after 85 years and several attempts, it was consecrated as a church. 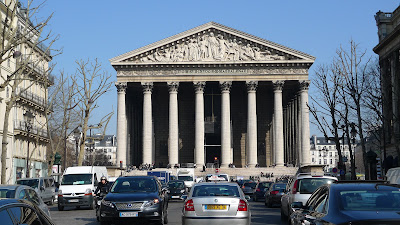 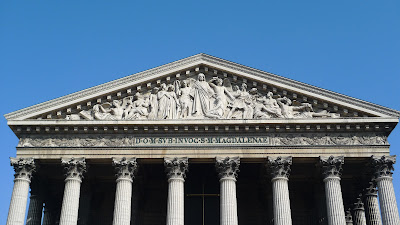 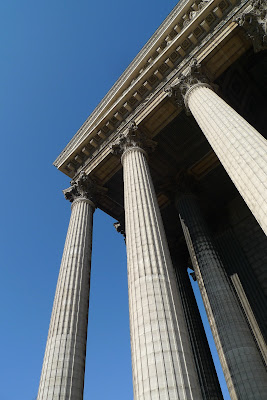 There are 52 Corinthian-style columns, 20 meters high, around the exterior of the building. 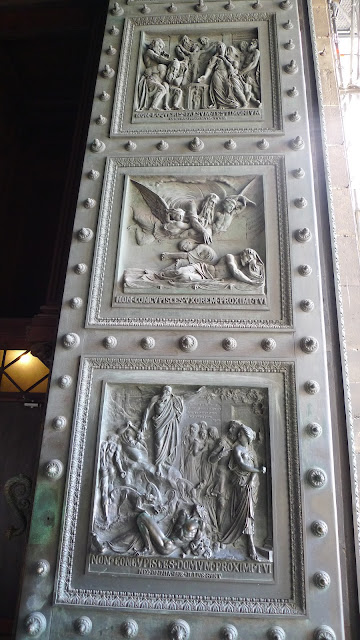 When the front doors are closed together, the different metal-relief sections depict the "Ten Commandments." 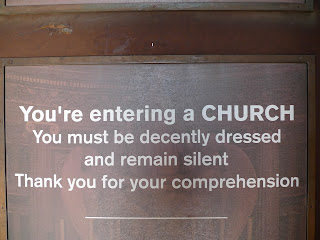 A reminder - about the dress code and decorum, while visiting the church. 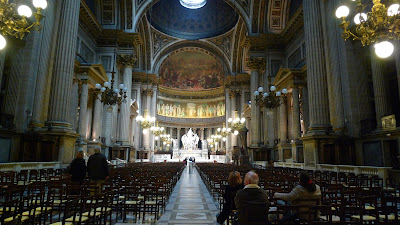 Church interior: There is a knave... 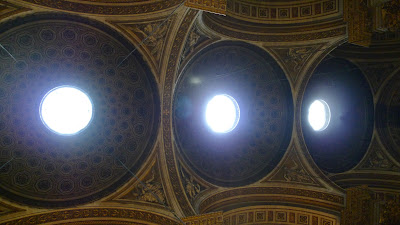 with 3 domes, through which natural light passes through. 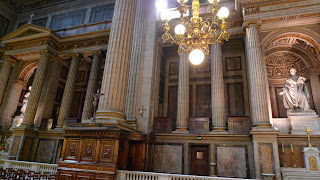 This is a window-less edifice. It is very dark unless the lighting fixtures are turned on. 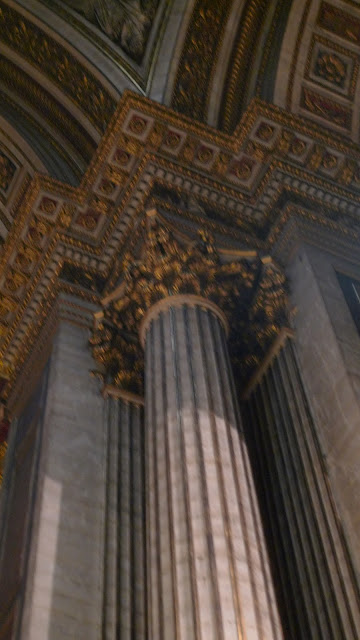 The decorative trims and other interior-design details are lavishly gilded, as inspired by the Renaissance artists. 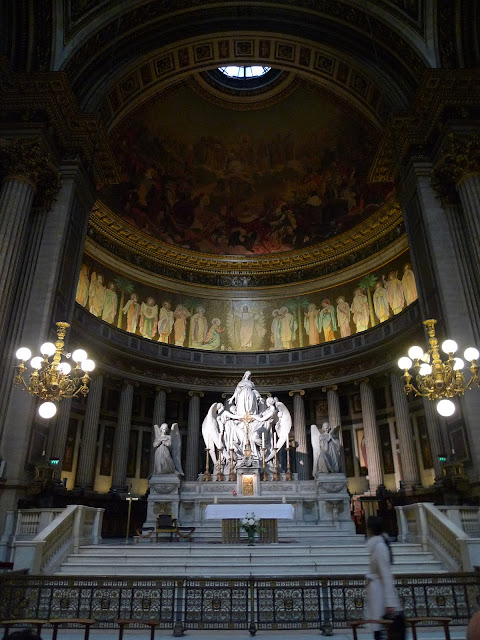 Main altar features
This is a very dark church on a regular day. But today, it was by divine appointmemnt that I happened  to come for a visit and all the lights were lit up for a scheduled, daily mass. When mass was over, I hurriedly took pictures to take advantage of the bright lights, to get better pictures. 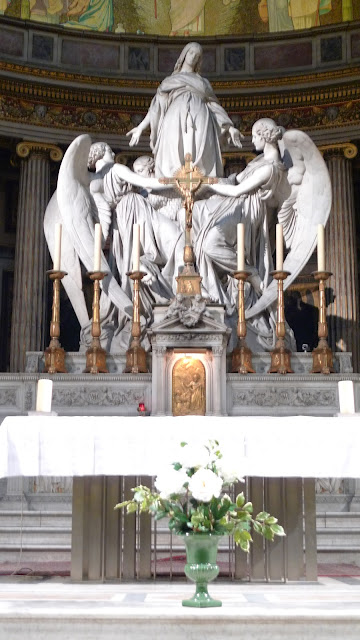 Above the rear altar is the statue of St. Mary Magdalene being assumed into heaven by two angels, as designed by Charles Marochetti. 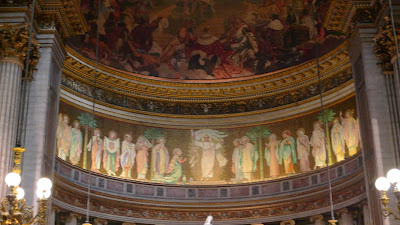 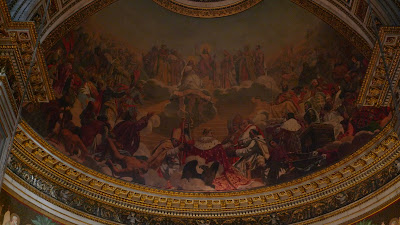 In this half dome, the frescoe by Jules-Claude Ziegler is entitled The History of Chistianity. It shows the main figures in the Christian religion, but somehow Napoleon ended up being on center stage, looking like the main figure. 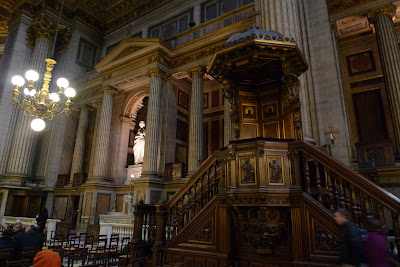 This is the pulpit that was used in the past to preach to the faithful. One would wonder how the seats were configured then, as this is almost half-way down the middle of the church. 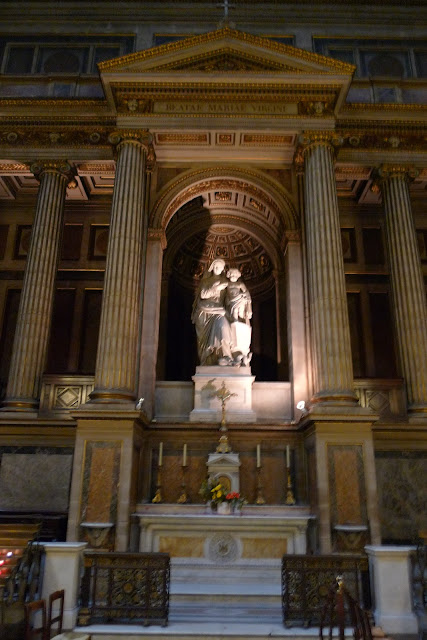 There are six side altars, just like this one. Each has a different statue above the altar. 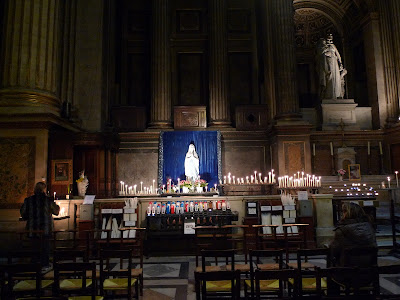 There's a side altar dedicated to Our Lady of Lourdes. The faithful light up candles for their intentions and petitions, to send their prayers up to heaven through the intercession of our Lady. 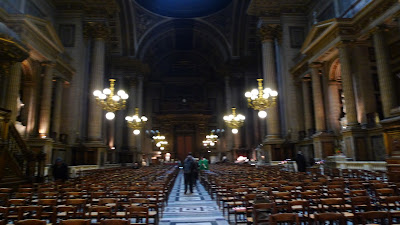 Walking down the center aisle towards the back door... 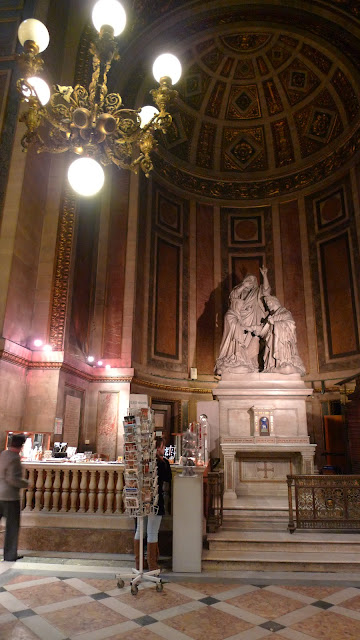 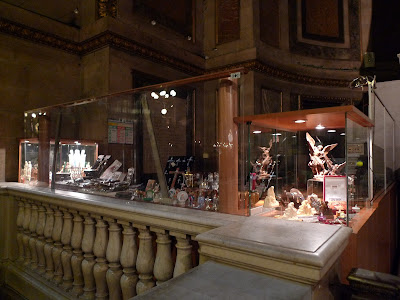 to the left is the gift shop... 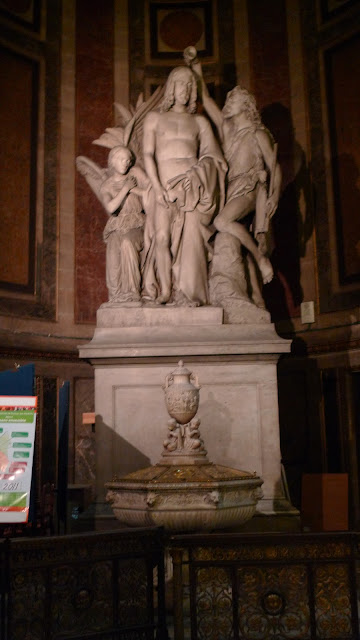 and to the right is the Baptistry -  a scene of St. John the Baptist baptising Jesus. 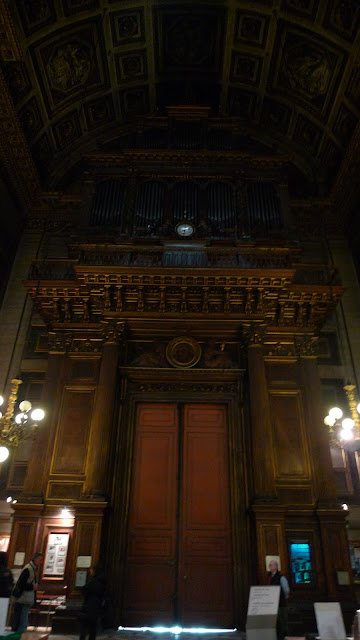 Right above the back doors is the organ loft. 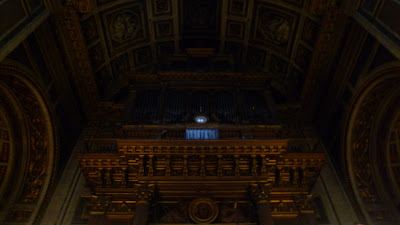 The church's pipe organ, reputed to be one of the very best in Paris, was built by Aristide Cavaillé-Cool (1811-1899). The composers Camille Saint-Saëns and Gabriel Fauré were both organists at the Madeleine, and the funeral masses for them and Frédéric Chopin were held here. Chopin's final resting place is at the Cimetière du Père Lachaise; Saint-Saëns  at Cimetière de Montparnasse; and Gabriel Fauré at Cimetiere de Passy.
Here are some notes about these people:
Frédéric Chopin was the great Polish composer. Please take a listen to one of his compositions "Nocturne No. 2 in E Flat Op. 9" performed by Horowitz.
Camille Saint-Saëns was a French pianist, organist and composer, who became the first classical composer to be commissioned to write a musical score for a movie. Although he did not reach the same prominence of Chopin, Wagner, or Liszt, he was an accomplished composer. Here is a sampling of his work "Bacchanale - Samson et Delila."
Gabriel Fauré's major work was "Requiem  in D "Minor" with the famous soprano part "Pie Jesu." Here is the original version of "Pie Jesu."
I can just now imagine the kind of magnificent, classical music that was performed in this church during those gone-by days. 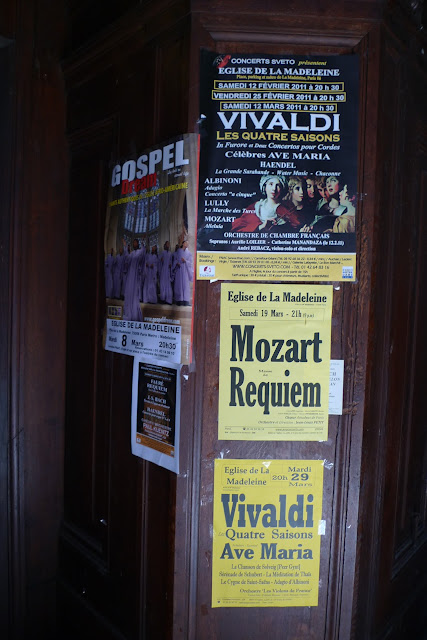 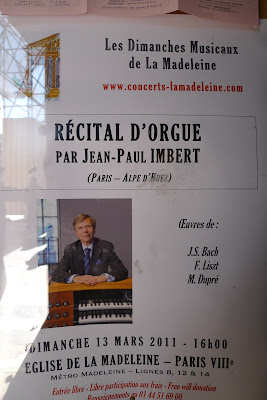 The masses and other religious affairs are under the management of a Benedictine abbey. Aside from masses, concerts continue to be regularly held here, with free admission. Please note some of the concert dates. 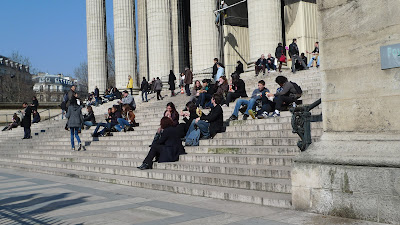 On a good day like today, people sit around the church steps to eat lunch, to get some vitamin D, or just to hang out with their friends. It is like a concrete park where the benches are the steps. 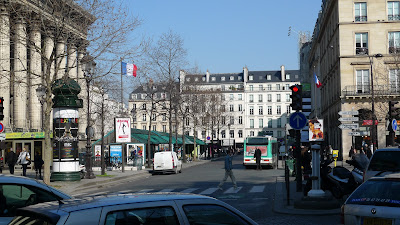 There is a flower market to the right side of the church. Do visit and be thrilled by just looking at the beautiful flowers, or buy - perhaps, to give away or keep for yourself. 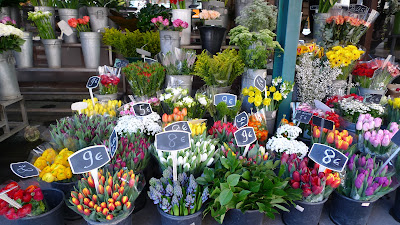 It's the season for tulips, hyacinths,  daffodils and other flowering bulbs. 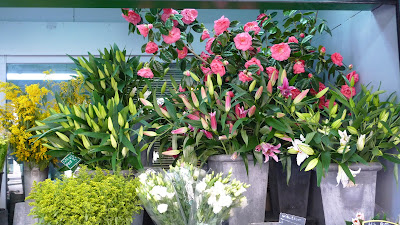 Here are some mimosas, camelias, paper roses, and lilies. 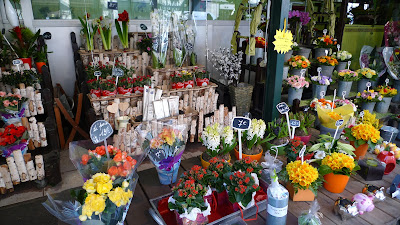 Potted flowering plants - ready to give a way or to bring home to adorn and brighten any room in the house. 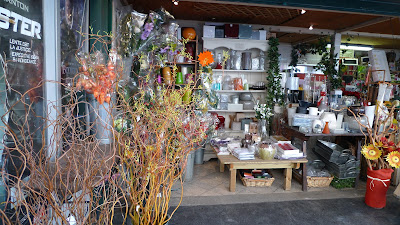 Choose a vase and they can make a flower arrangement for you, or you may make one yourself.
I will be back here on Ash Wednesday - the first day of Lent, after celebrating fat tuesday. It is a day of fasting and repentance. It is 40 days before Easter. It is at this time that the whole of Christendom will reflect on the message of salvation and eternal life. To be quiet and meditative, I have found a good spot at the Eglise de la Madeleine.
Posted by yolanda at 13:04