Last night, New York City got a light dusting of snow. Still reeling back from the heavy snow storm of two days ago, maybe this would not really make much of a difference in what the locals are facing.

I, being a visitor, was just excited to see how the local scene had changed from these snowstorms, coming within days of each other in the same week. From two days ago, this is how the neighborhood looked like.

Waking up to a new pile of snow in the Big Apple last January 27 - about 12 inches, I went out early in the morning before catching the 8:00 a.m. mass around the block. 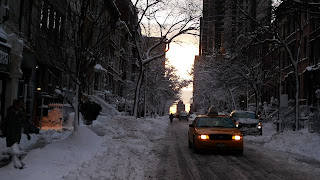 I was mesmerized by the beauty that the snowfall, the snow artist to me, had done. 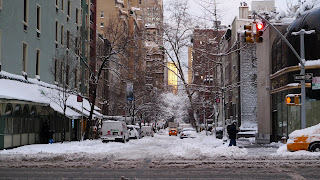 It was winter wonderland in the city 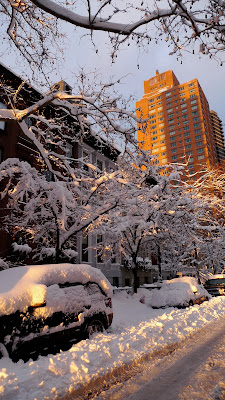 I soon thought that  this would turn to chaosland. 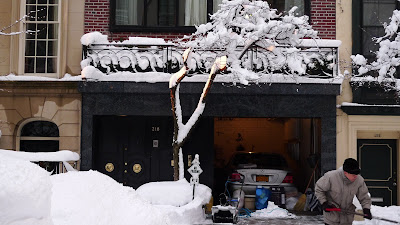 This homeowner had to shovel the snow from the driveway to be able to drive away in his car. 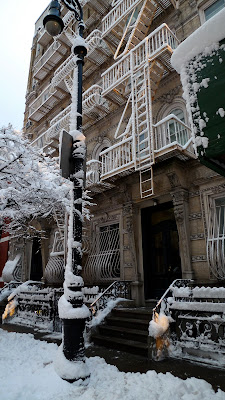 I saw beauty in how the snow had highlighted and given a new look to the fire-scape ladders, the metal fences, the light posts... the entry steps to the brownstones... 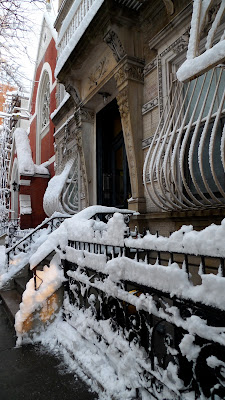 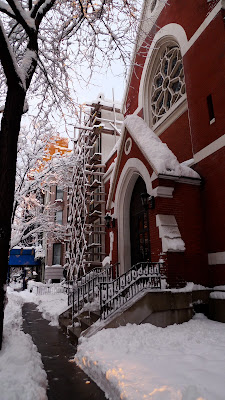 Just when I was about to head for the church, Our Lady of Peace on 60th Street, between 3rd and 2nd Avenue, I slipped on a hard-packed, icy patch and landed on my left behind! I got up quickly and continued taking pictures, but realized that I had to bend my knees and lean forward, as though I am going skiing, to be more stable when walking on this kind of surface. 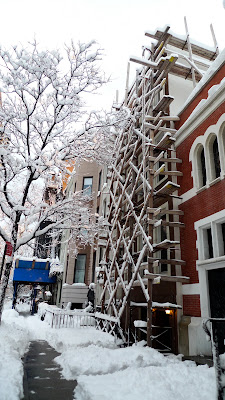 This lattice design is a setup for a brownstone that is being worked on - perhaps undergoing cleaning or a refacing of its façade. I just loved the snow effect it had. 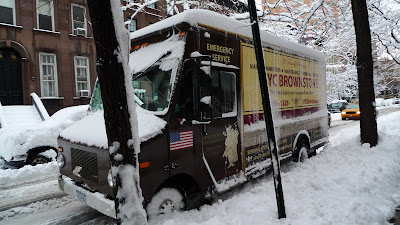 After mass, I was greeted by this sight. I wondered what emergencies needed to be attended to - perhaps gas and electrical, or water service was interrupted. 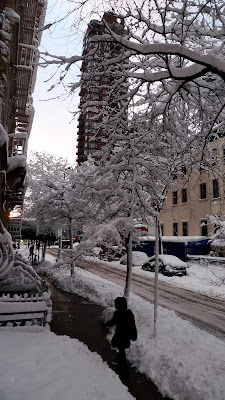 More sidewalks were cleared up by the homeowners, but this side street and several others remained unplowed. At the end of the block, the sun was peeking, just as it was forecasted. 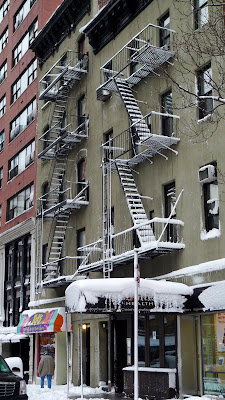 In parts of the sidewalk that were still snow-covered, it was easier to walk on fresh snow than on tracks that had been previously created by other passersby. 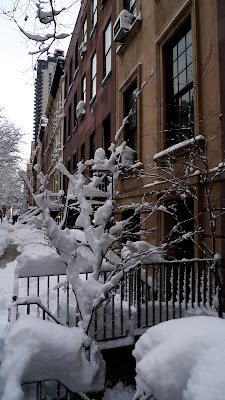 This is a dugout entry to a brownstone unit. I wondered how the residents would be able to get out as the snow had blocked the doorway.

I remembered Monet, who in his series paintings had used the same theme in his paintings, which he captured in different seasons. In the last exhibition at the Grand Palais, I liked his wintry scenes. I began to imagine how beautiful some of the popular places would look like. 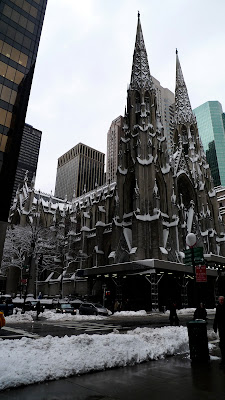 
The crowning glory of the work of the snow artist was in Central Park, where it looked magical, attracting people of all ages to come, as classes had been suspended and many offices were closed. 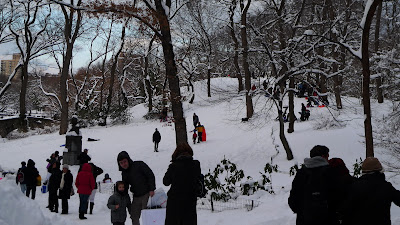 Families came with their children, with sleds frolicking down the hills. 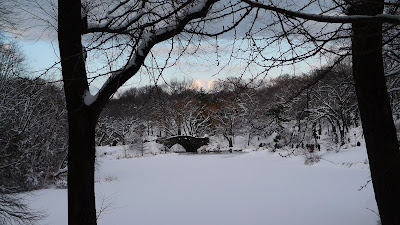 The pond had frozen and was covered with snow, with only  part of the bridge showing. 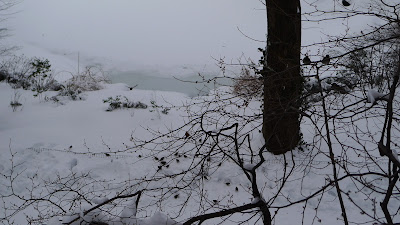 The birds came around, too, to enjoy the fresh snowfall. 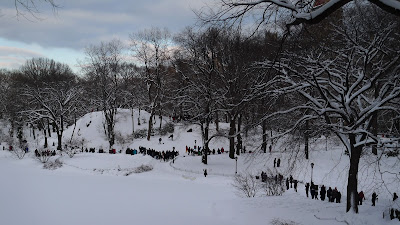 The park visitors followed the pathways cleared around the park, giving them different angles to enjoy the view or shoot pictures. 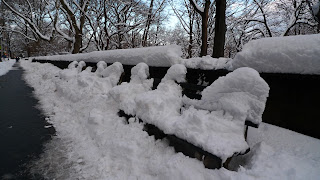 Around the periphery of the part, the park benches were taken over by these snowy figures. 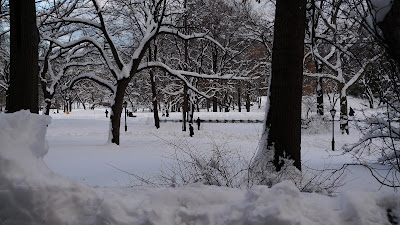 Central Park was now a forest of  frosted, bare-branched trees. 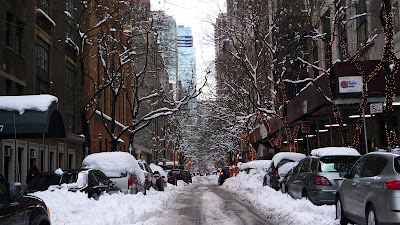 The side streets from Central Park West were also left unplowed, and pedestrians had to be beware of cars cruising by, splashing dirty slush. 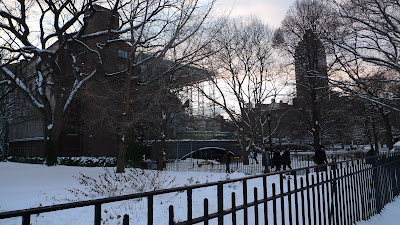 This is Theodore Roosevelt Park, surrounding the American Museum of Natural History.


All together, I must have walked for a total of three to fours hours that day, just marveling at the snowscapes. 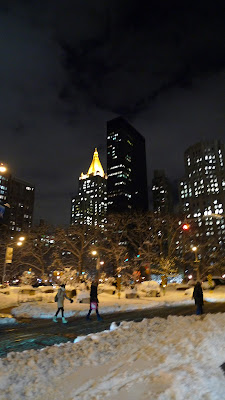 By night time, I made it to Madison Park and had dinner at Eataly.

This whole day, I wondered how I would survive living in a place like New York City, that has severe winters. For now, I am content to be a visitor who got to experience the coldest temperatures on record and the multiple snow storms in a week.