For us, going anywhere is about location, location, location! The first thought that comes to mind in choosing a hotel in Rome is to find one somewhere around the vicinity of the Spanish Steps. http://www.rome-tours.org/visit-rome/spanish-steps.html  That is where all the action is. This holiday season, the last-minute arrangements we made landed us in Hotel de Russie,.

The family members began to arrive, coming from different places. My daughter and I landed in Ciampino Airport. We queued for a taxi knowing that it was a fixed rate at 30 Euros to get to Rome. By some instinct, my daughter verified the rate in Italian, with the taxi driver before boarding. Her accent was a dead give-away. We were tourists! He wanted 50 Euros. That was a "no go" for us. 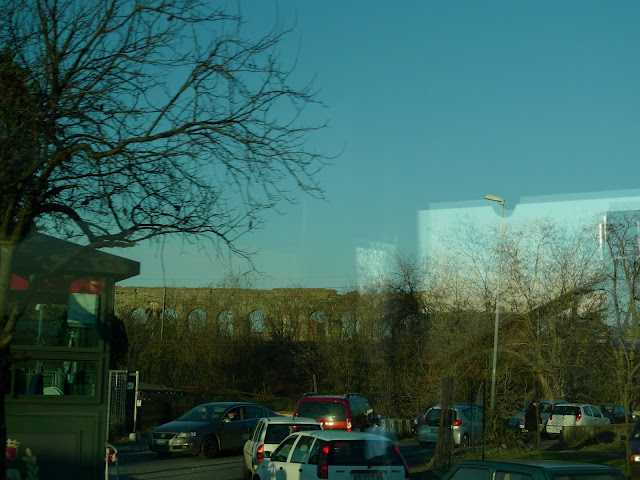 Considering the time, since rush hour was coming up in another two hours, we decided to catch the airport bus to the city's train station,... 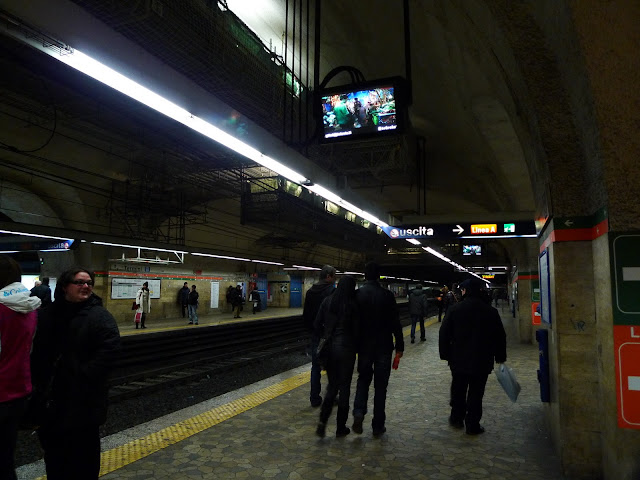 and hopped onto the metro. We exited at the "Spagna" stop. We were quite satisfied that we got to the center of Rome, all for less than 10 euros, and we did not have to deal with the traffic! But, we had to patiently figure out the directions to take while inside the train/metro stations, without hesitating to ask questions when we felt lost. 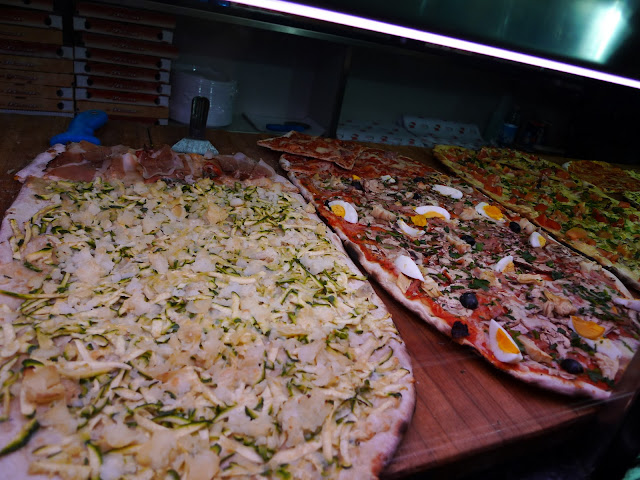 We were famished by the time we walked out of the station and the first place we saw was a little pizza place. Those gigantic pizzas sure looked so good. 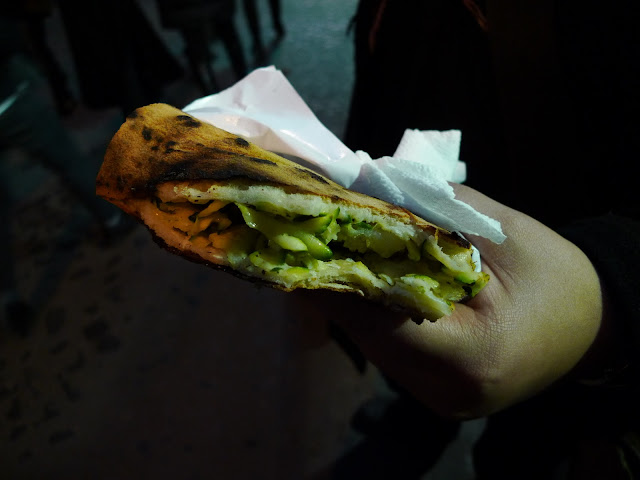 We ordered a vegetarian one with potatoes, zucchini, broccoli, and onions. When it was handed to us, it was folded like a sandwich...hmmm, I learned something new: that was a practical way to eat it. 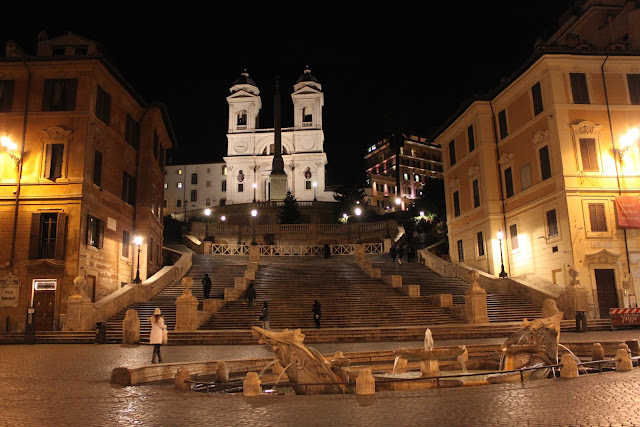 We made it to the Piazza Spagna, and began  looking for... 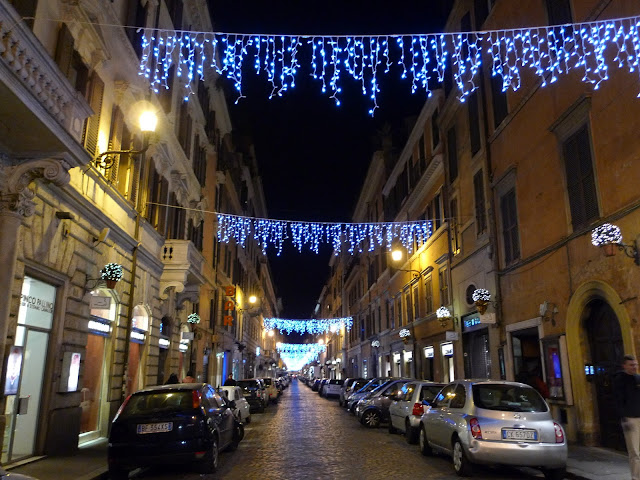 Via del Babuino (Baboon), to get to our hotel. 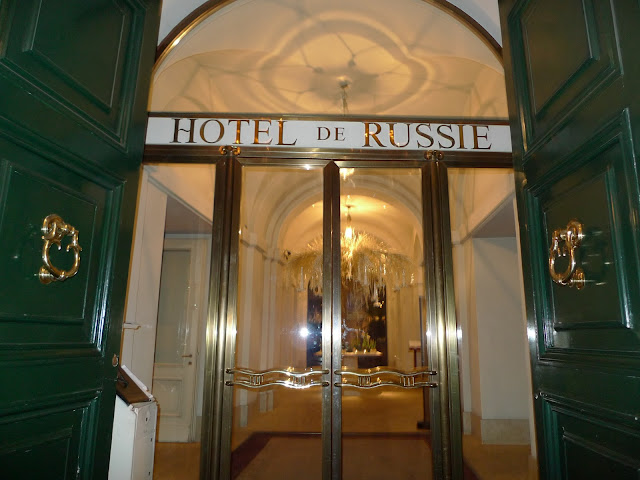 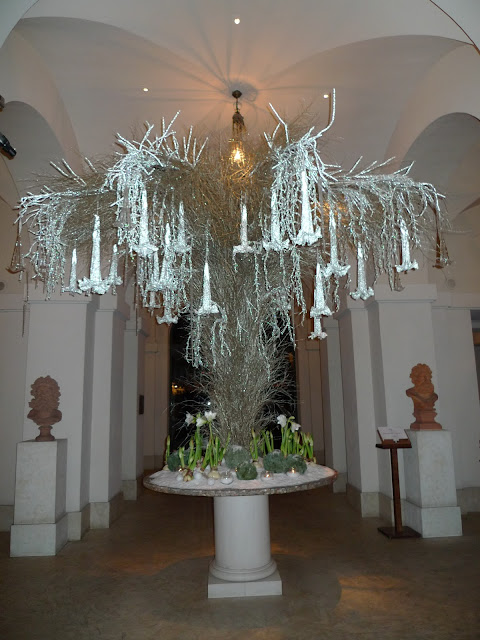 It is a luxury five-star hotel located between the Spanish Steps and the Piazza del Popolo. This turned out to be a good location for us. It was within walking distance of of the other attractions we wanted to walk to: the fashionable Via Condotti, Piazza Navona, Fontana de Trevi, and the Vatican City. 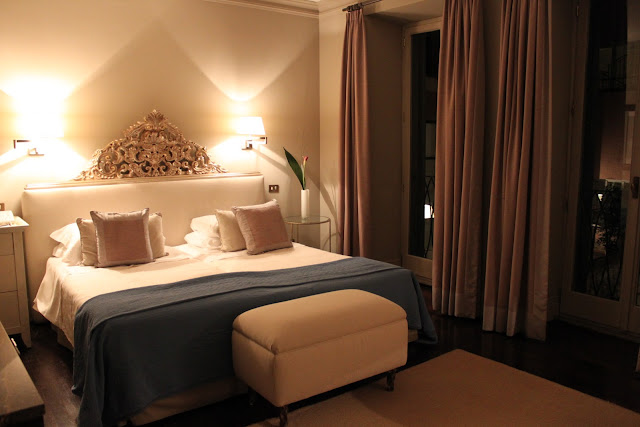 This was our room, with a view of the terrace garden and the courtyard,... 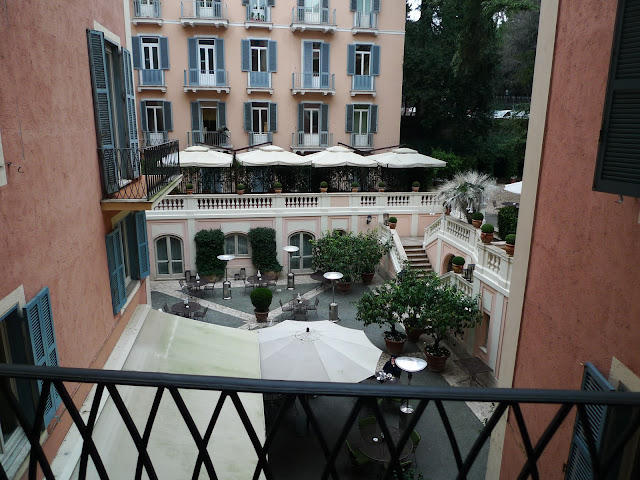 where you can dine in open-air at Le Jardin de Russie. During the spring and summer seasons, the Stravinskij Bar opens up and extends its boundaries into the garden.

The following morning, I woke up at 5 a.m. I got dressed and got directions to go to church to hear mass. To my delight, the church was just 2 minutes away, in the Piazza del Popolo (People's Square). 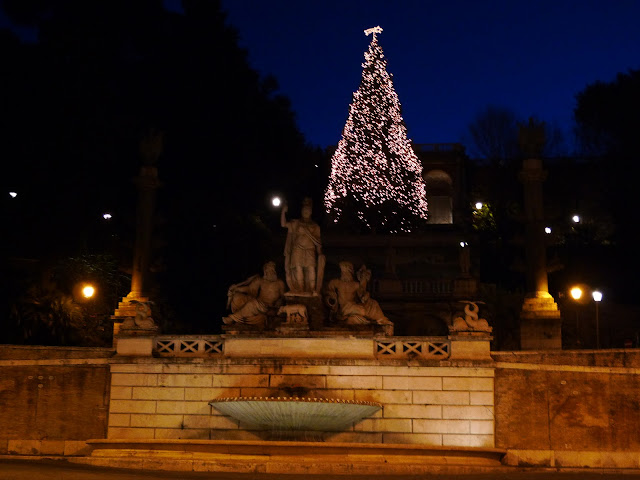 Fontana del Nettuno...Historically, the piazza was originally named after the poplar trees in that area. It was designed in neoclassical style by Giuseppe Valadier, between 1811  and 1822. 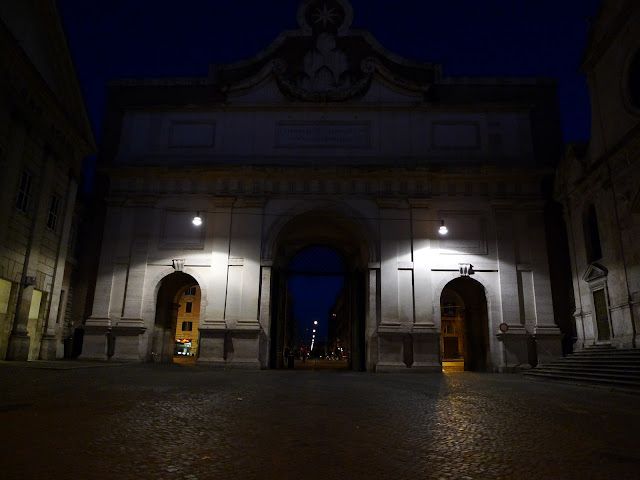 This is the piazza's northern gate, which used to be the starting point of routes to the north. This was also, for  the travelers who came by foot or other means of transportation, their first view of Rome. 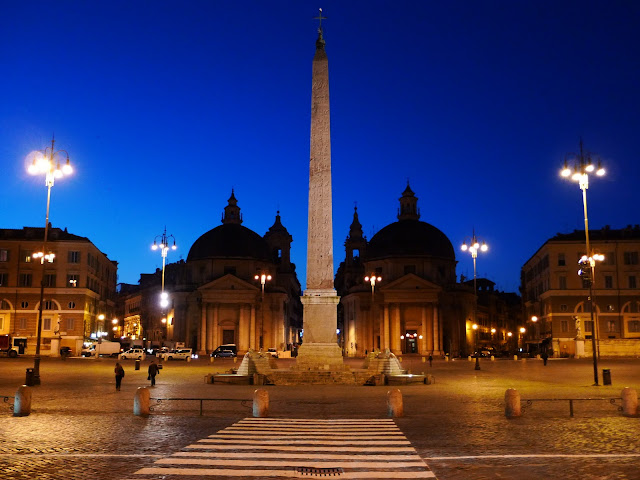 From this angle, il tridente (trident) is formed with three streets originating from the piazza: Via del Babuino, Via del Corso, and Via di Ripetta. An Egyptian obelisk of Sety, and later erected by Rameses II, is at the center of the square. For centuries, public executions were held here, until 1826 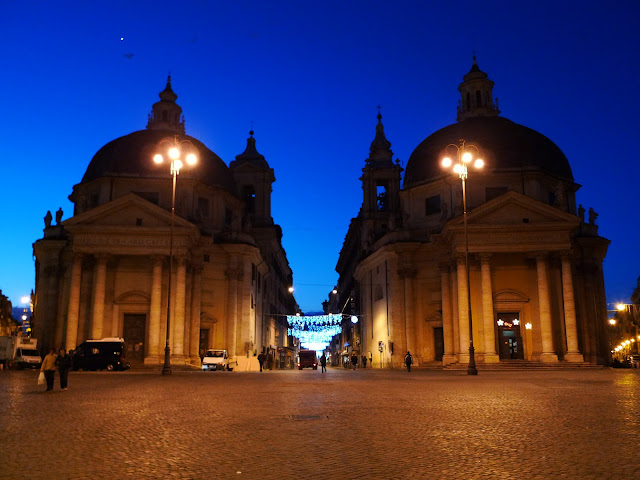 Taking a closer look, these are known as the twin churches, Santa Maria in Montesanto (1679) to the left, and Santa Maria dei Miracoli (1681) to the right. Via del Corso is the street that passes between the two of them. Although the building structures look symmetrical, there are  varying details between the two of them, in Baroque style.  http://en.wikipedia.org/wiki/Piazza_del_Popolo 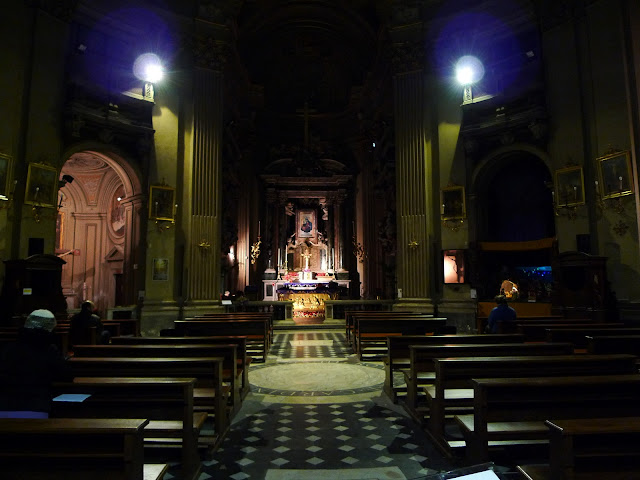 I went to the church on the right, Santa Maria dei Miracoli. As I entered at about 6:30 a.m. I soon realized that they gave me the wrong mass information at the hotel lobby. Mass was going to be celebrated at 7:30 and not at 7:00 a.m. By the time mass was about to begin, the church filled up with men and women who were dressed up to go to work. 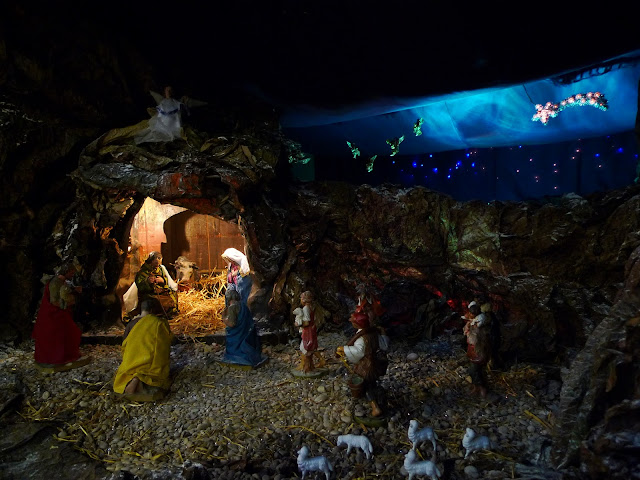 I passed by the side aisle to get a glimpse of the nativity scene. It warmed my heart. 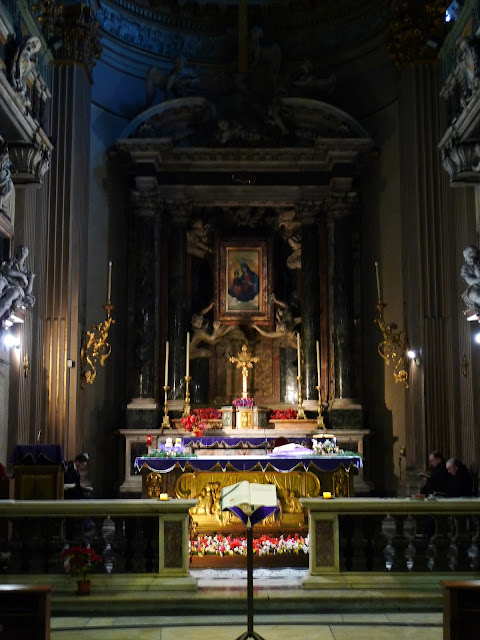 The church's main altar...I lingered around to see the side chapels and the captions that told of stories about the faith, the martyred saints, the relics, and more interesting details about the interior furnishings and personalities who were involved with this church at some point or other in her history.

The sun was out when I left the church.   http://en.wikipedia.org/wiki/Santa_Maria_dei_Miracoli_and_Santa_Maria_in_Montesanto 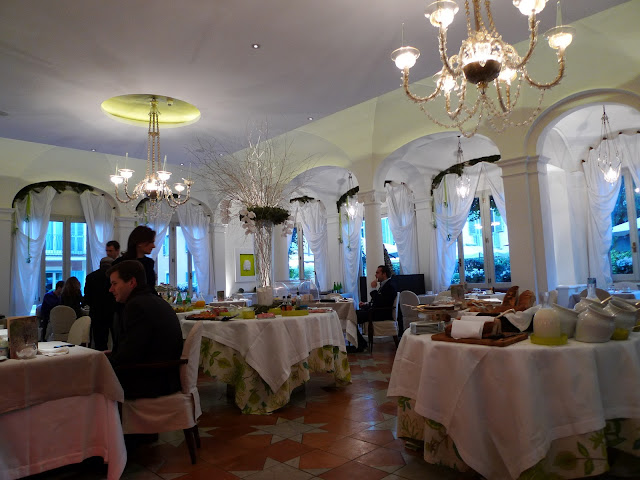 It was breakfast time at the hotel. This was not the typical intercontinental breakfast included in most hotel packages. It was quite a spread. 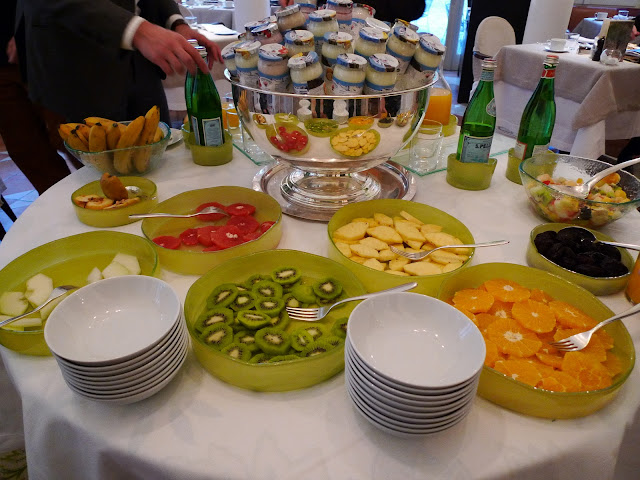 This was the healthy table, with sliced fresh fruit and juices, mineral water, and a variety of yogurts. 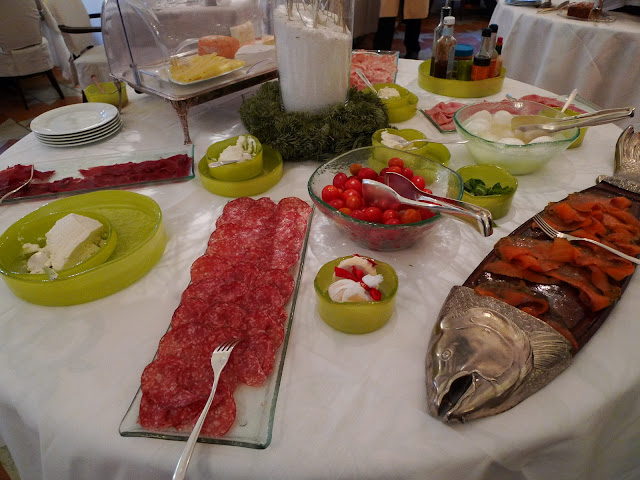 If you like dried cured-meats, smoked salmon, and Italian cheeses, this  would have been the table of your choice. 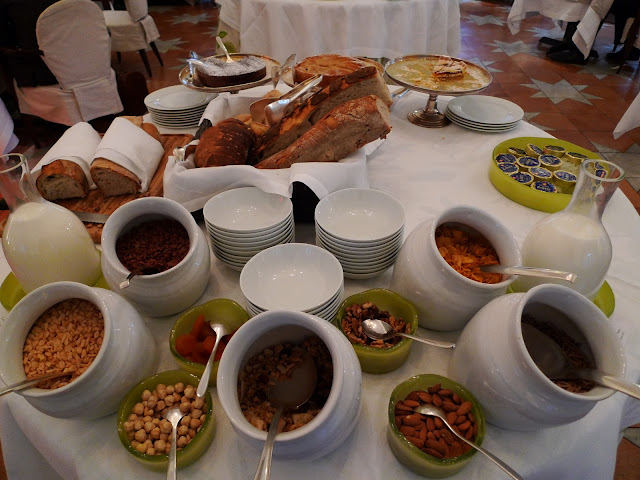 This was the high-carb table: breads, cakes, tarts, cereals and nuts. I went for the nuts.
After a power breakfast, we were on our way to sight-see. 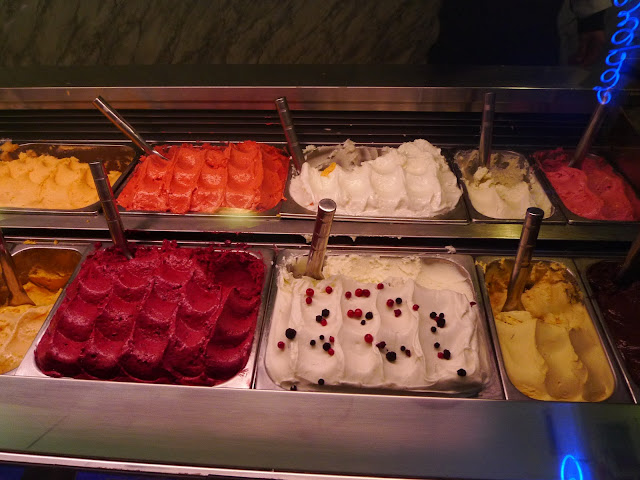 We could not leave Rome without having our gelato fix. We found a gelateria on Via di Ripetta. The cold weather could not keep us from enjoying a cupful of these!
After three days and two nights, it was time to leave. Our stay at Hotel de Russie was quite pleasant and their staff was hospitable. Arrivedeci Roma!
Posted by yolanda at 06:11