In my pilgrimage to Poland - In The Footsteps of Pope John Paul II - I had the occasion to learn more about the devotion to the Divine Mercy of Jesus. It was through a Polish saint -  Sister Faustina, who was canonized under the papacy of Pope John Paul II - that the world was given the message about Jesus' divine mercy for all of us.

What is Divine Mercy? We are called to acts of mercy through our actions, words, and prayers as we perform the corporal and spiritual Acts of Mercy. This is our response to God's merciful love.

The ACTS of MERCY:
CORPORAL Works: feed the hungry; give drink to the thirsty; clothe the naked; shelter the homeless; comfort the prisoners; visit the sick; bury the dead
SPIRITUAL Works: teach the ignorant; pray for the living & the dead; correct sinners; counsel those in doubt; console the sorrowful; bear wrongs patiently; forgive wrongs willingly

Jesus demands from us our deeds of mercy, which are to arise out of our love for Him. There are the three degrees of Mercy: first, by deed; second, by word; and third, by prayer. "In these three degrees are contained the fullness of mercy, and it is an unquestionable proof of love for Me. By this means, a soul glorifies and pays reverence to My mercy." 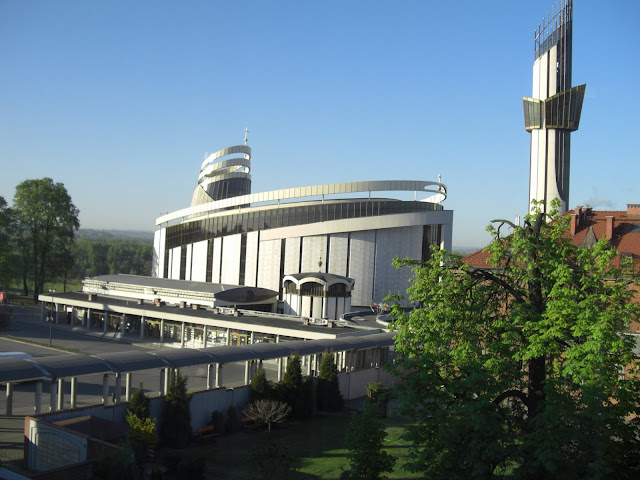 From our Pilgrim House in Lagiewniki, I could see
the Sanctuary of the Divine Mercy. 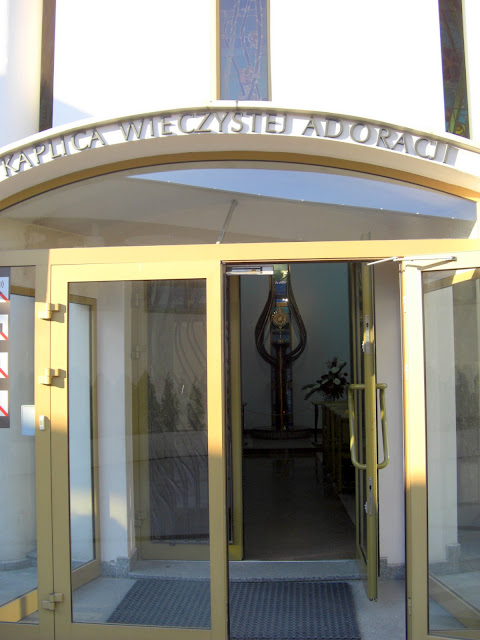 I spent a few minutes at the Perpetual Adoration Chapel,
which is open 24/7. 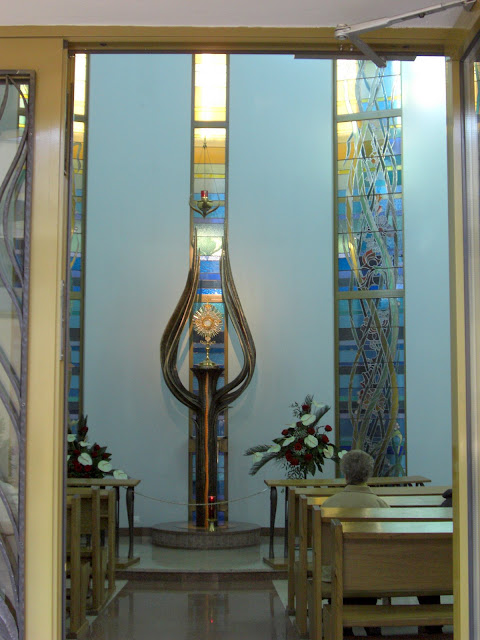 From the outside, I zoomed in my lens to take a picture of the interior of the chapel. Picture-taking was not allowed inside. 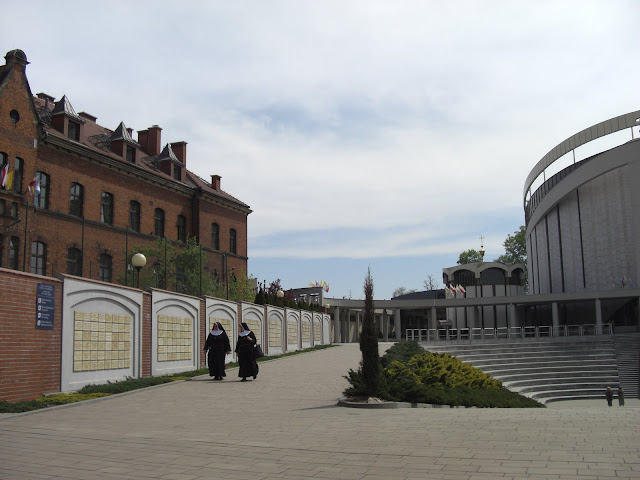 The Sanctuary is next to the school (brick red building)
for rehabilitating women. 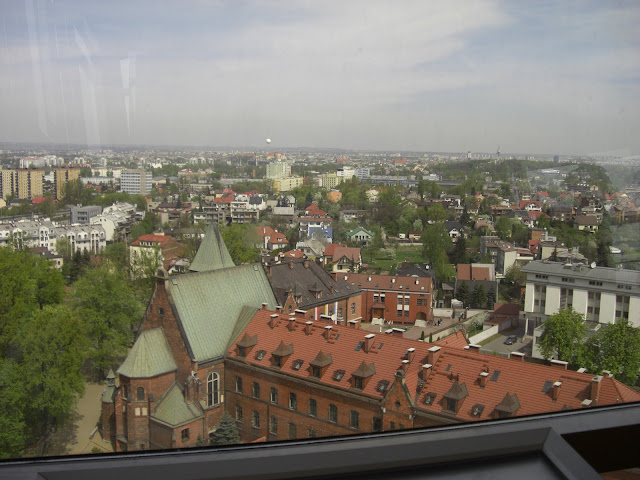 This is the panoramic view of the city from the viewing tower. 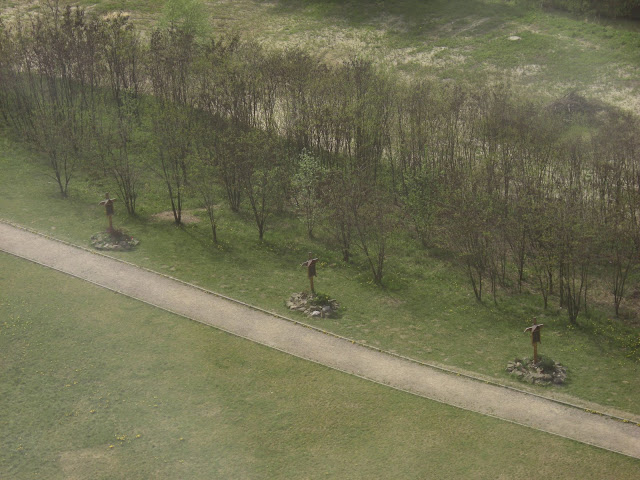 This outdoor “Way of the Cross, ” which gets populated by pilgrims from all over the world, especially, on Divine Mercy Sunday,... 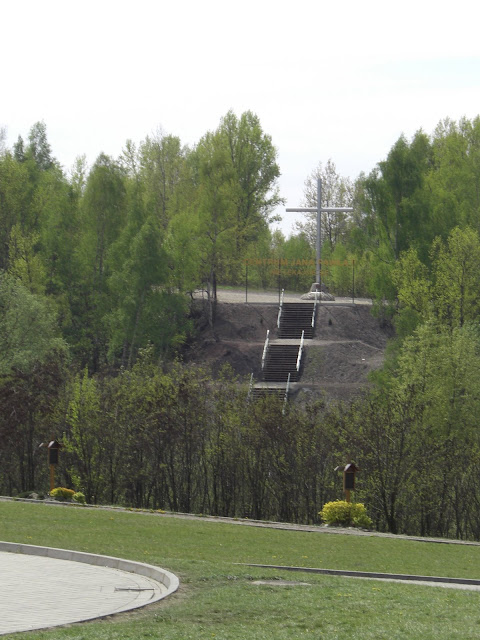 leads up to this cross on a higher elevation, where Pope John Paul II celebrated the Divine Mercy Mass, in one of his visits to Poland. 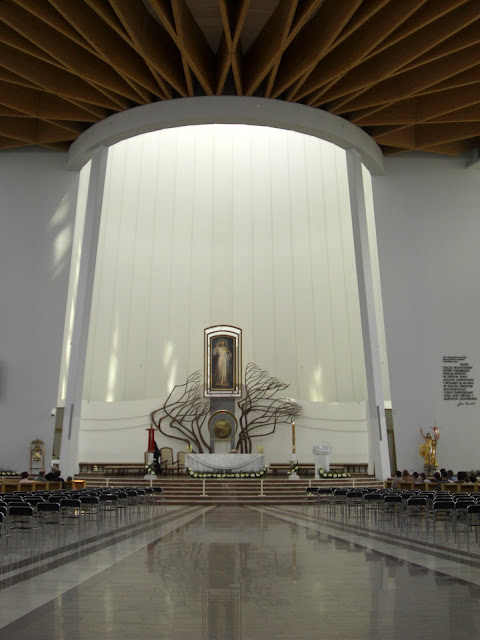 The main altar of the Sanctuary of Divine Mercy

On our second day, we heard mass at a chapel under the main altar of the Sanctuary, then, Sr. Gaudia gave us a talk on St. Faustina, who was chosen by our Lord to make known the “Devotion to the Divine Mercy.” 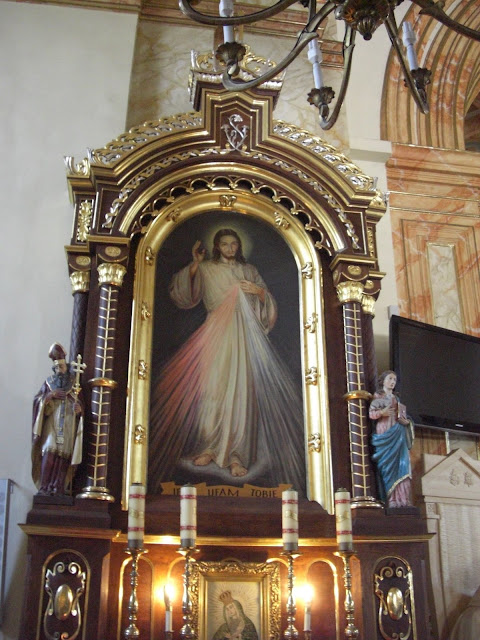 In many of the churches, there is a side chapel in honor of the Divine Mercy. 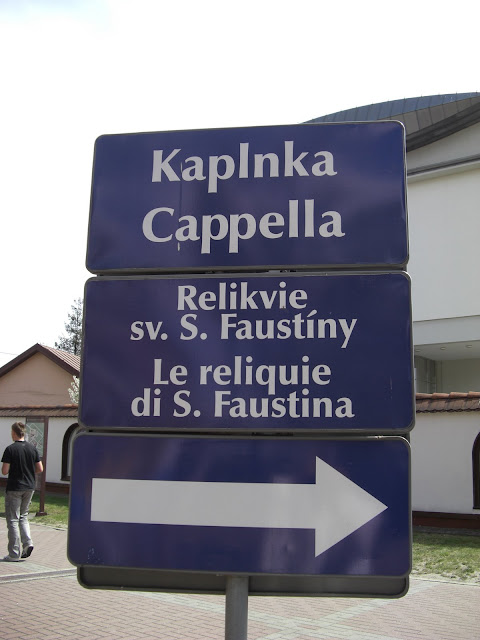 Sister Faustina, who was Helena Kowalska, was born on August 25, 1905, in the village of Glogowiec, in Lodz, Poland. Because she came from a very poor family, she went to work in at he age of 14, without completing elementary education. By the time she had turned 15, the call to a religious life was so strong that she informed her parents of her desire to enter the convent.

She entered the Congregation of the Sisters of Our Lady of Mercy on August 1, 1925, and went through her postulancy in Warsaw; later, she was sent to the novitiate house in Cracow. At her investiture, she was given the name Sister Mary Faustina. After her second year at the novitiate, she made her first profession of vows on April 30, 1928; next, as a professed sister, she was assigned work in the various houses of the Congregation: in Warsaw, in Vilnius, in Kiekrz near Poznan, in Plock, in Biala near Plock, in Warsaw and in Cracow. And. finally, on May 1, 1933, she took her perpetual vows. 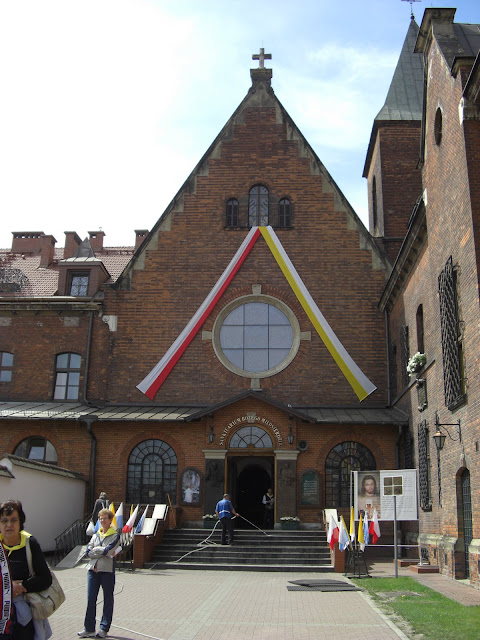 Chapel of St. Faustyna
(this is how her name is spelled in Polish) 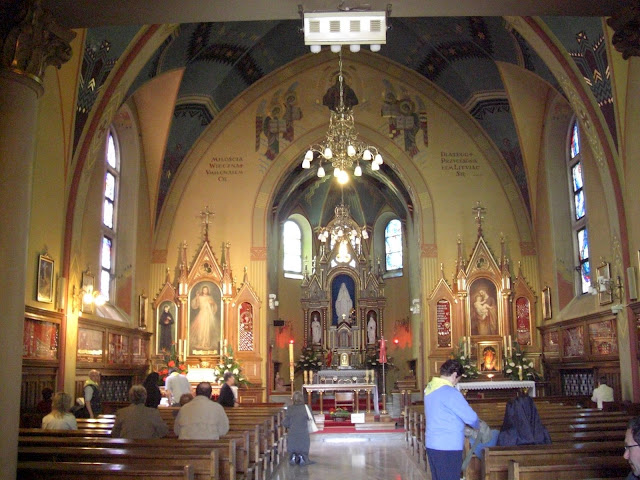 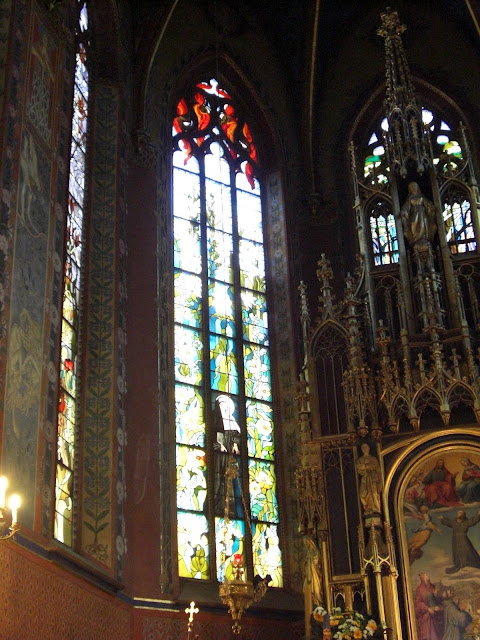 On the left of the altar is the stain glass featuring St. Faustina; on the main altar is a partial view of St. Francis looking up to heaven. 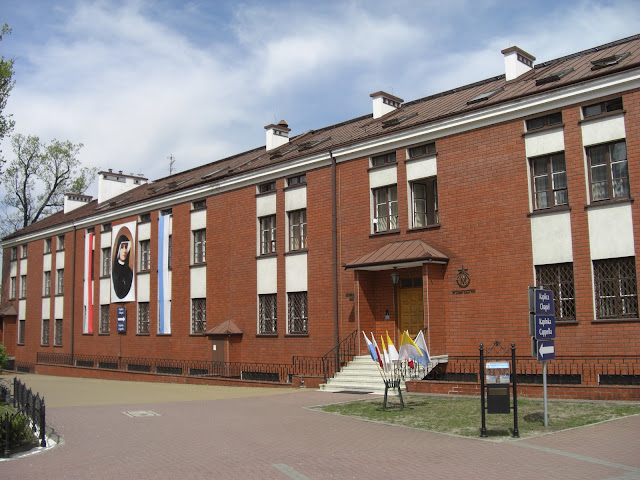 The convent St. Faustina had joined

She was in poor health, and after only a few weeks of convent life her health began to deteriorate. She was afflicted with tuberculosis and suffered violent asthmatic attacks. Her condition worsened, that in 1936, she spent the last years of her life in the hospital; and after having been brought back to the convent in Cracow, she died on October 5, 1938.

The CHAPLET of The Divine Mercy

St. Faustina received a vision of an angel sent by God to punish a certain city, in 1935. She began to pray for mercy but realized that her prayers were powerless. Suddenly, she saw a vision of the Holy Trinity and felt the power of Jesus’ grace within her. She began to plead with God for mercy, with words she heard interiorly:
Eternal Father, I offer You the Body and Blood, Soul and Divinity of Your dearly beloved Son, Our Lord Jesus Christ, in atonement for our sins and those of the whole world; for the sake of His sorrowful Passion, have mercy on us. (Diary, 475)

The Divine Mercy Novene starts on Good and ends on the Saturday prior to the first Sunday after Easter. There is a different intention for each day as given by our Lord to St. Faustina. "I desire that during these nine days you bring souls to the fountain of My mercy, that they may draw therefrom strength and refreshment and whatever grace they have in need of in the hardships of life and, especially, at the hour of death."

Please click on this link for the Divine Mercy Novena.

There are two conditions to receiving the extraordinary graces  for the forgiveness of sins and the remission of punishment  (Diary 699) from celebrating Divine Mercy Sunday, after completing the novena:
1. By making a good confession beforehand and remaining in the state of grace;
2. And, by receiving Holy Communion On Divine Mercy Sunday , or during the vigil celebration.

Talk about a nobody, uneducated, insignificant person by worldly standards, yet Sr. Faustina was chosen by our Lord to bring us His message of Divine Mercy.

Pilgrimage to Poland: The Way of the Cross, by a Polish artist

Last April, I joined a pilgrimage to Poland: In the Foot Steps of John Paul II. One of the memorable parts of this visit was going to Czestohowa (pronounced as Chestohova). 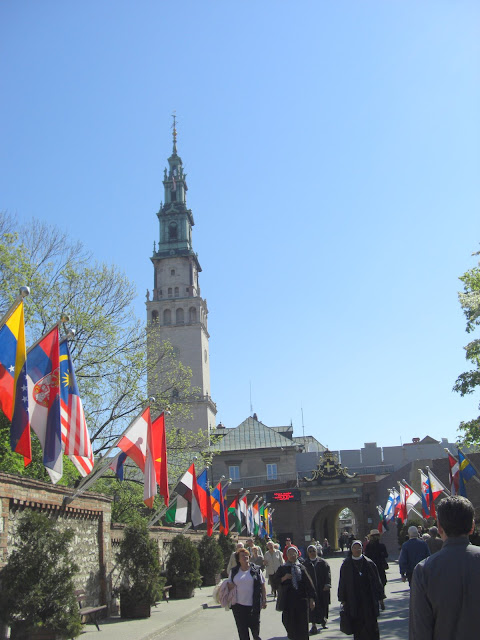 We visited the the fortified monastery of the Pauline Fathers which houses the Black Madonna, a sacred icon known also as Jasna Gora or Our Lady of Czestochowa, and is more than 600 years old. 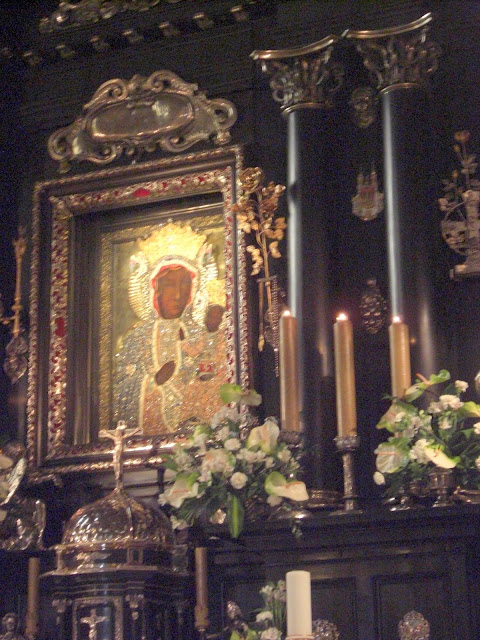 Our local guide quietly took us through the main altar area, along a special path for pilgrims, for a closer look of the sacred icon... 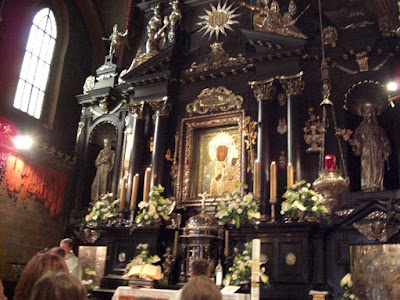 Many miracles are attributed to Jasna Gora's intercession. According to a German pilot's report, during WWII, who was detailed to bomb Czestochowa, a lady on top of the church was catching the bombs that were being dropped to destroy the church. The whole complex was spared from destruction. 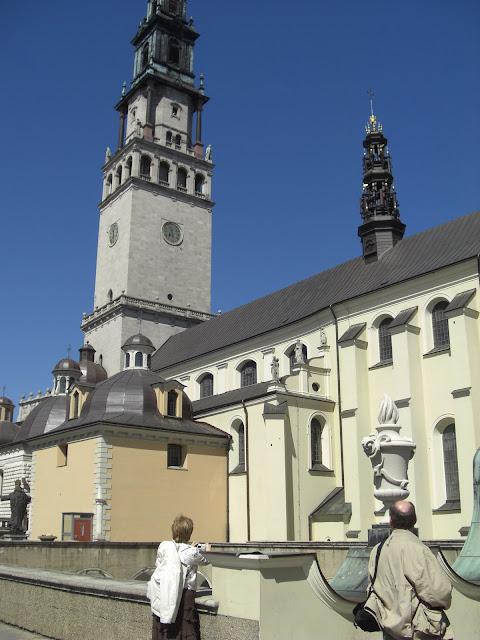 We , then, walked out to go to the museums within the complex.


This is what caught my attention: the "Way of the Cross" as portrayed by a Polish artist, with a historical commentary on Poland and world affairs...“ Jesus is Condemned to Death”...“Jesus Takes Up His Cross”... 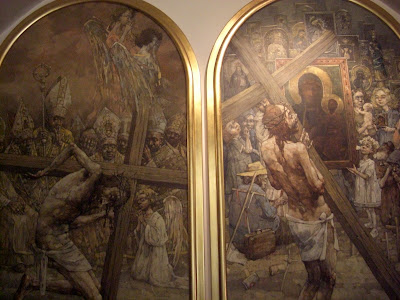 using Polish-related backgrounds, such as the clergy, the Black Madonna...“Jesus Falls the First Time”...“Jesus is Met by His Blessed Mother”... 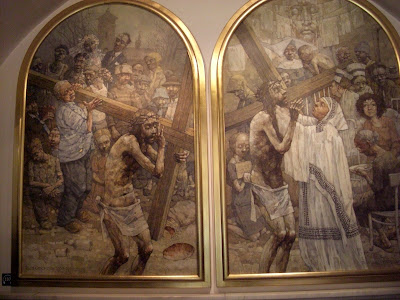 the common people... “Simon of Cyrene Helps Jesus Carry the Cross” ...“The Face of Jesus is Wiped by Veronica“... 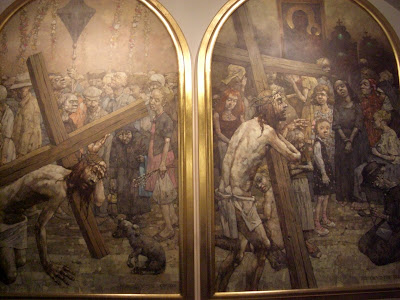 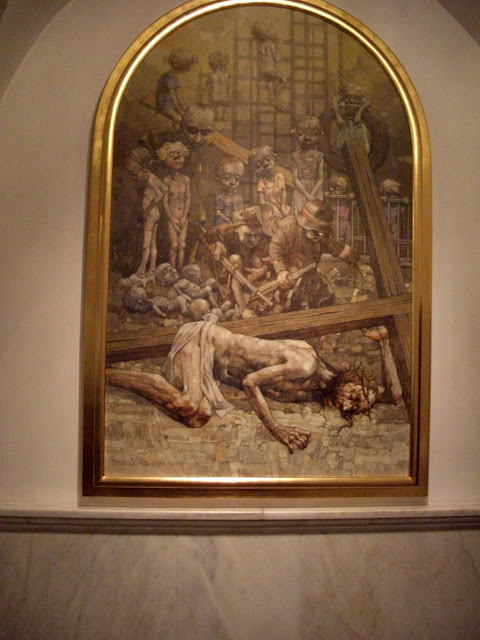 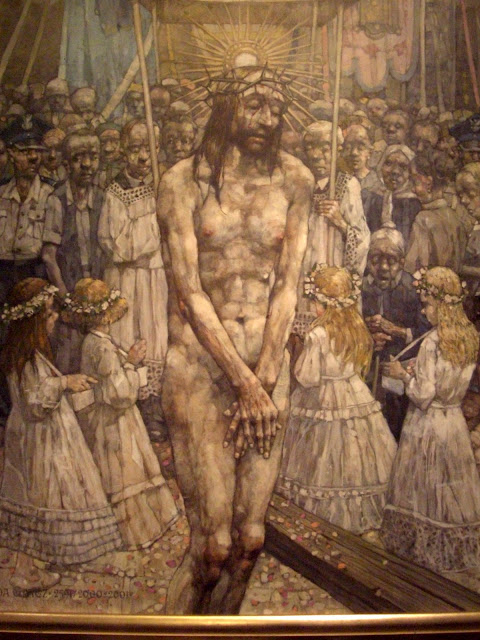 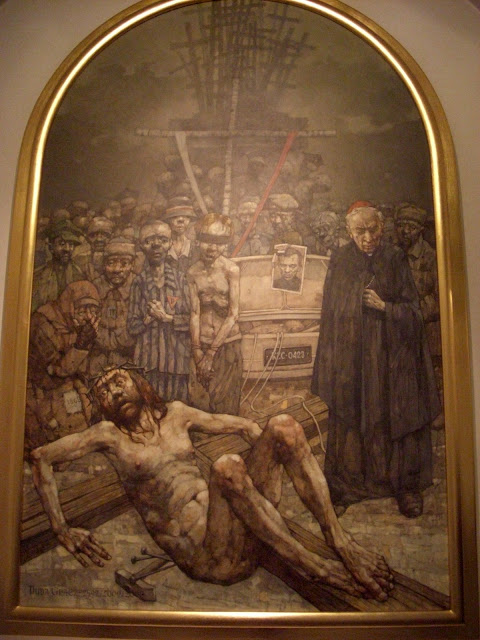 and historical facts such as the extermination of the Jews in Auschwitz, under German occupation...“Jesus is nailed to the Cross”... 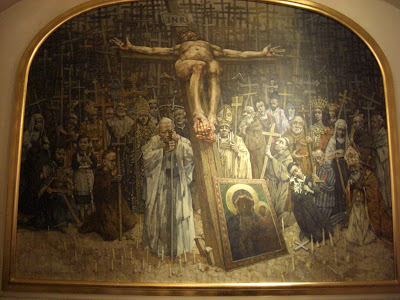 Here, Pope John Paul II and Our Lady and the rest of the Polish people surround the crucifixion...as “Jesus Dies on the Cross”... 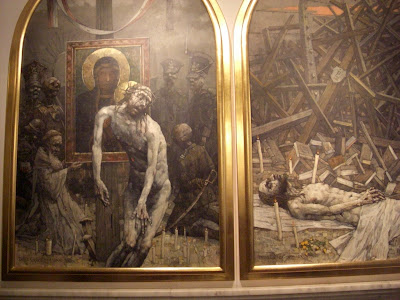 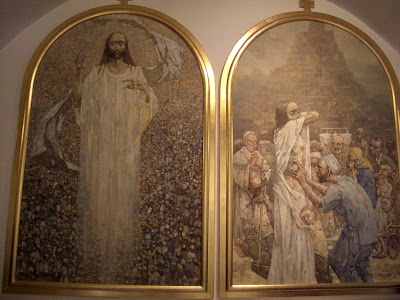 with the added scenes of the “Resurrection” and “Doubting Thomas”... 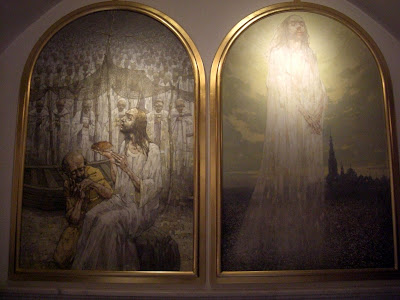 the “Multiplication of the Loaves of Bread and Fish”...the “Ascension into Heaven of our Lord.” 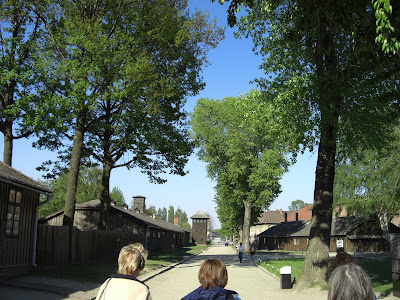 From Czestochowa, we proceeded to Auschwitz- Birkenau (formerly known as Oswiecim) to visit and pray for the victims of the now-famous concentration camp.

May you have a blessed, happy Easter celebration!
Posted by yolanda at 00:39 2 comments: