In December of 2009, my family gave me a memorable gift  to celebrate a milestone birthday - to visit Padre Pio in San Giovanni Rotondo, then to Rome. 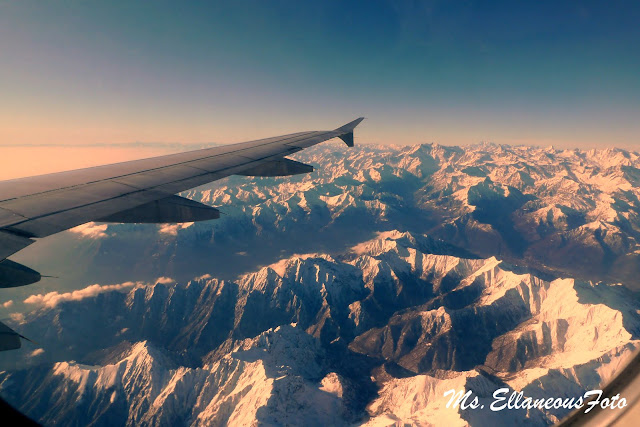 As we were about to land in Bari, which is the closest airport to San Giovanni Rotondo, the view of the snow-covered mountain ranges confirmed the www.weather.com forecast: wintry cold weather conditions. My friend, Choy Arnaldo, describes Bari as "... it used to be a small town but very prosperous with lots of business from coal to diamonds. Today, it is an amazing industrial complex amidst traditional grapevines and rural peasantry! You can taste old Italy here!" 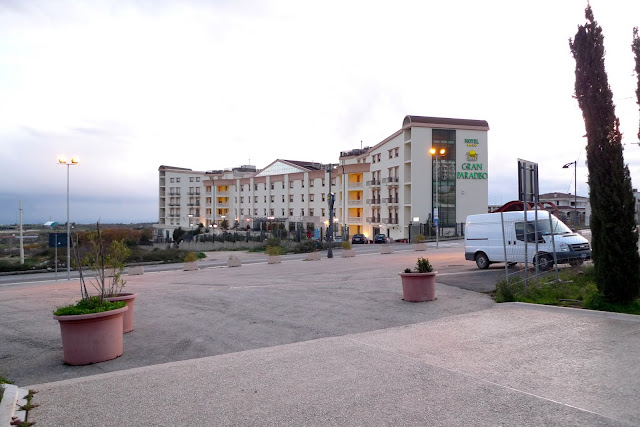 Our hotel - Hotel Gran Paradiso, was booked online. The location turned out so perfectly. As we crossed the street... 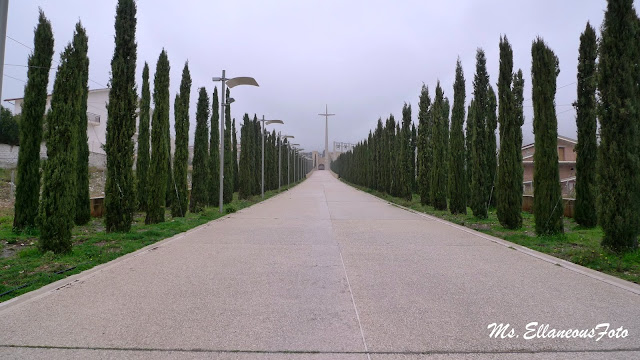 we walked straight onto this path, from the lower street level, 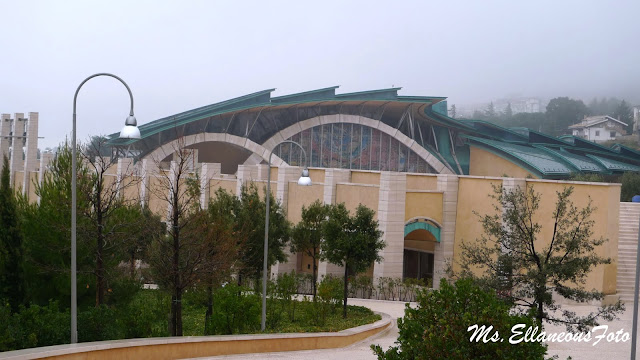 to get to the Basilica di S. Padre Pio. 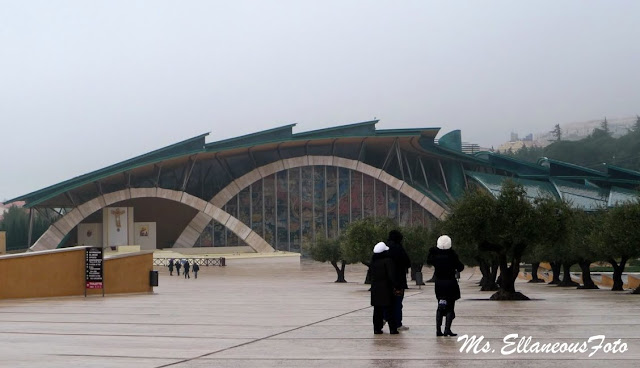 The basilica was designed by the world-renowned Italian architect, Renzo Piano.


This modern architecture garnered much critical publicity at the initial stages, for looking more like a stadium rather than a house for pilgrims. Note that the roof is patterned after a snail shell.


In the exterior setting is an open space - with an outdoor altar for use on big occasions,  designed to hold more pilgrims on big feasts and other celebrations, as the screen doors (next to the outdoor altar on the left) open, connecting it to the interior church space. 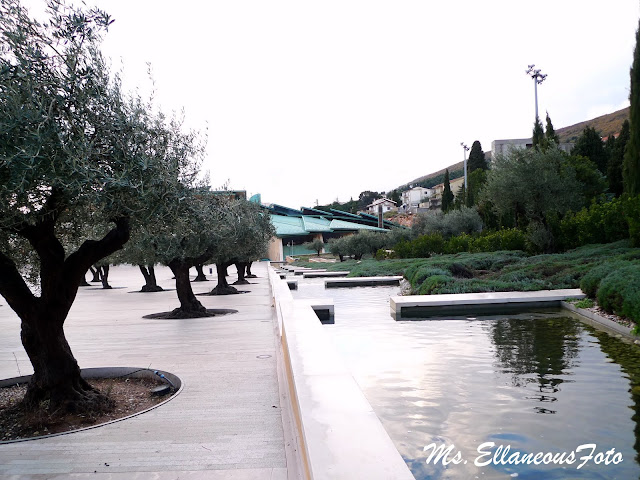 Water element in the landscape

This reminded me of the Jordan River - the cleansing waters of of Jesus' Baptism as he was baptized there; and the set of olive trees was symbolic of the Garden of Olives, where Jesus prayed for the mission he was to carry out for the forgiveness of our sins and the redemption of our souls. 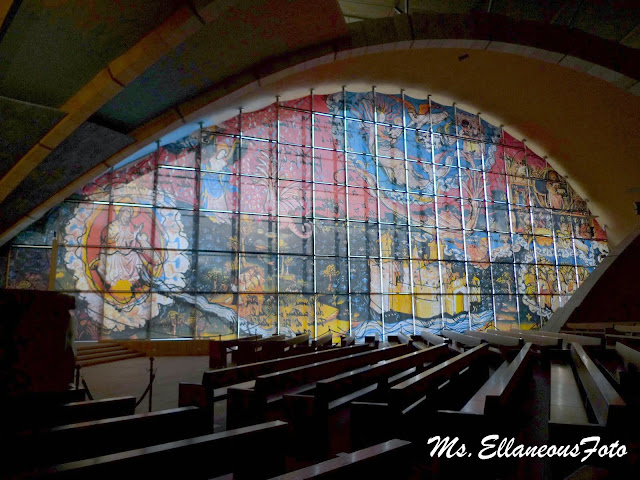 This is the interior shot of the screen (next to the indoor altar) that opens the church to the outdoor space. 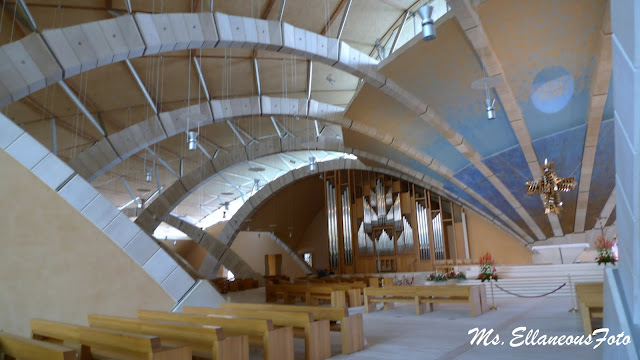 From behind the altar is the center point from which the arch-support structures for the whole building emanate... 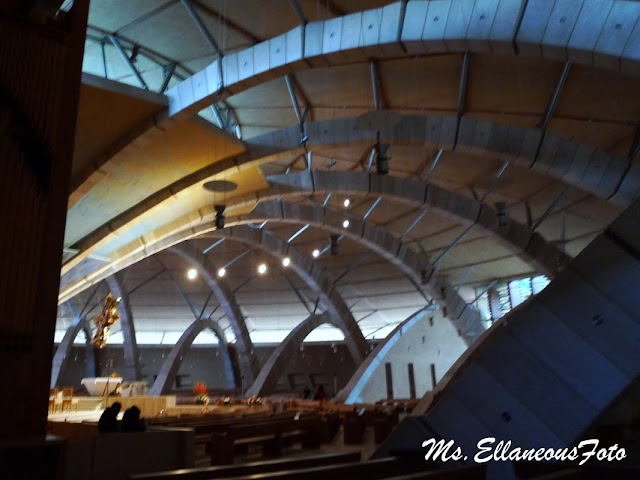 supplemented by smaller arches in between the main support arches, that aid in carrying the load of the ceiling. 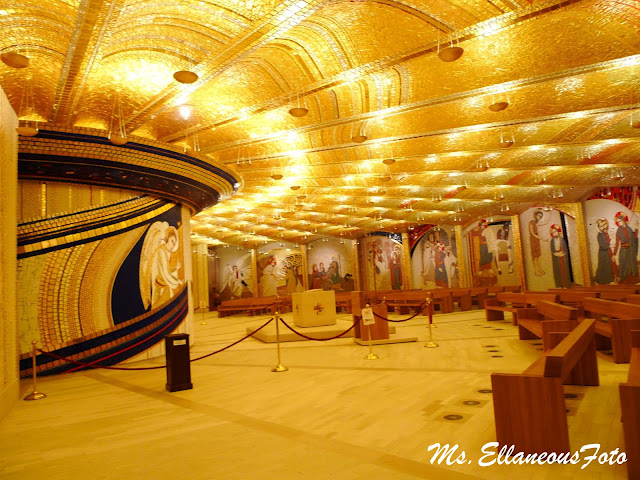 In the lower level of the basilica is this chapel.

Today, I reminisced about my trip to San Giovanni Rotondo as we celebrated the feast of Saint Pio (Padre Pio of Pietrelcina). His parents were peasant farmers - Grazio and Giuseppa Forgione. When he was born (May 25, 1887), he was christened "Francesco," in honor of St. Francis of Assisi. Even in his youthful days, he was very devout and was specially drawn to the priesthood. He became a Capuchin novice at sixteen years old and became a priest after he studied for seven years, in 1910, and became Padre Pio. 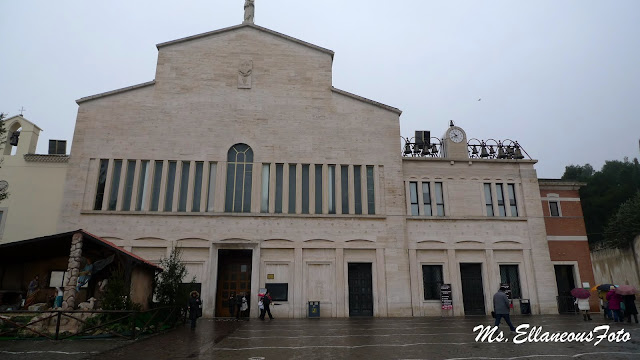 The new basilica is situated next to the old Chiesa de Santa Maria delle Grazie (1969), where his body lies in state. 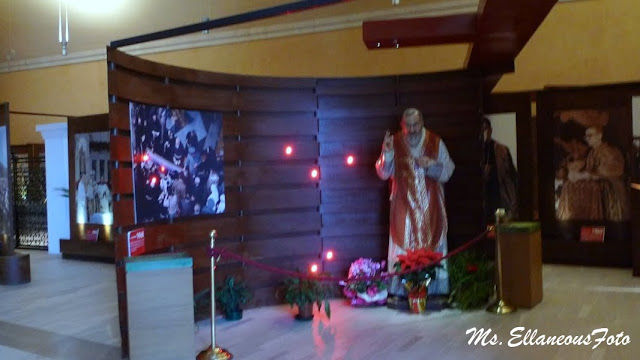 This is the old church where Padre Pio served, which remains as a church, today. It also houses the museum where the memorabilia of Padre Pio details his life and works as a priest and a miracle worker. Padre Pio is a canonized saint in the Roman Catholic Church. 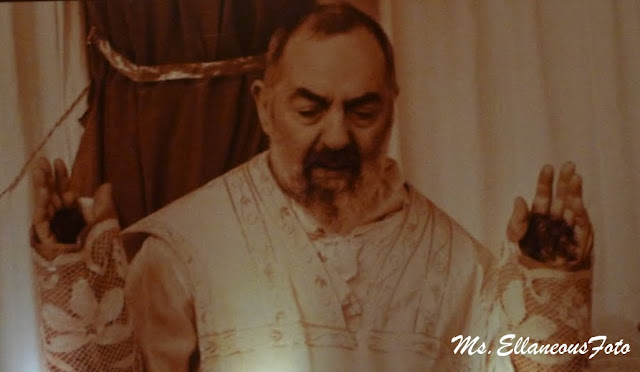 It was in September, 1918, that he had received the stigmata - the signs of the crucifixion of Christ Jesus in the form of wounds in the same spots Jesus' body was nailed to the cross,  while praying before a large crucifix. He was the first priest to receive the stigmata. By the time of his death in 1968, there were no visible signs of his wounds on his hands and on his feet, not even scars. He was heard to have said, fifty years before, that his wounds were going to heal before his death. 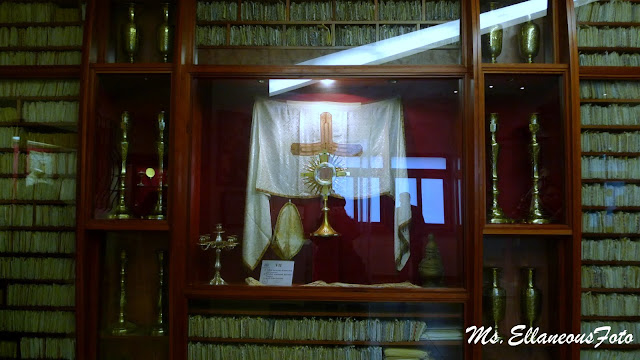 In this room, all the shelves are cramped with letters of thanks from people who had received healing through the intercession of Padre Pio, while he was still alive.


There were other mystical details about Padre Pio's life. There are witnesses who claim that he had bilocated and visited them while they were praying, as they asked him to intercede for them. He came, on several occasions, to visit people in different parts of the world to let them know that their prayers were being heard. 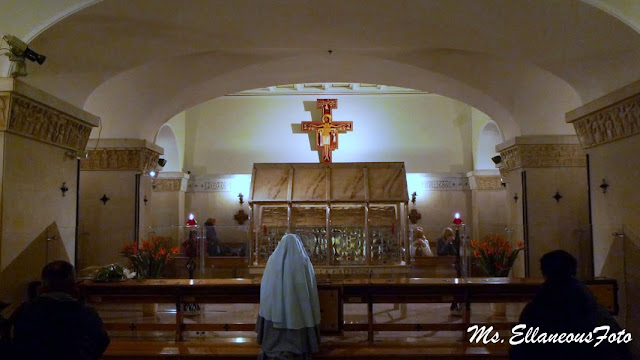 In the lower level, a special place has been organized for pilgrims to be able to pay homage and pray for his intercession for whatever petitions they carry in their hearts. Here is where he lies in state, in a glass coffin,... 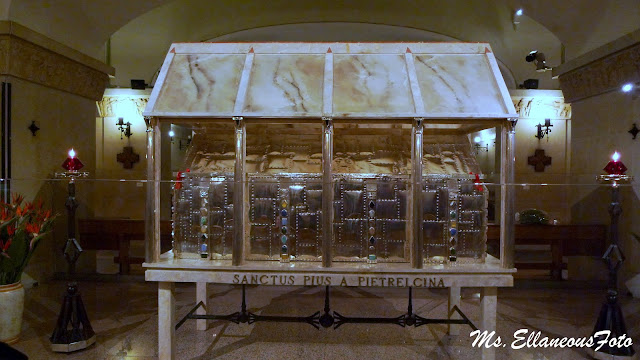 protected by an ornate metal covering. The glass coffin is exposed for public viewing at special times of the year. 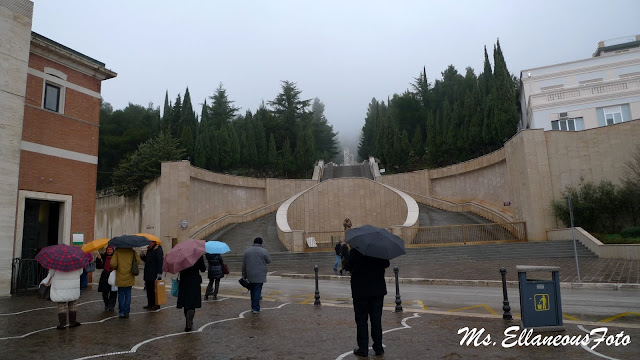 Because of inclement weather, we missed the chance to climb the hundreds of steps in this structure across the street from the old Chiesa di Padre Pio, as it was closed to the public. This is the outdoor setting where pilgrims pray and follow the Way of the Cross. 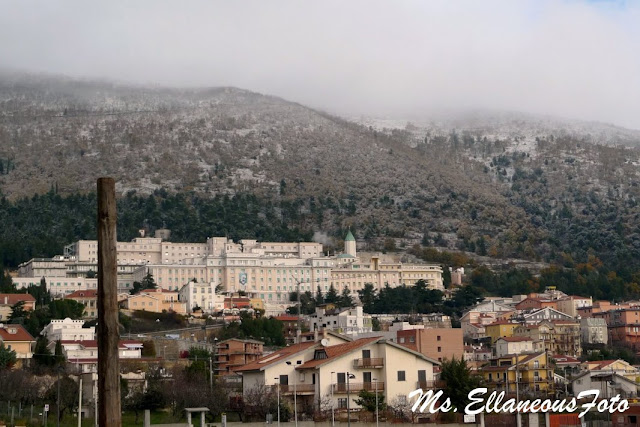 One other prominent structure - next to the outdoor Way of the Cross, is the hospital (white, big structure) Casa Sollievo della Sofferenza (Home for the Relief of Suffering)  built under the supervision of Padre Pio in 1940 and opened in 1956.


Padre Pio, who was originally from Pietrelcina, was sent to the remote town of San Giovanni Rotondo when he received the stigmata.  But soon, this town became a destination for many who wanted to see him, hear him, and meet him. Many healings and other miracles were attributed to his intercession, and the word got around. One of his visitors was Cardinal Karol Wojtyla - who was the cardinal of Kakow, Poland, at the time. Padre Pio told him that he was going to become pope, one day. And he did, as Pope John Paul ll.


He was a "reader of souls." Sometimes, the people who went to him to make their confessions were reminded about their sins, which they had failed to confess. People also went to him to seek counsel about their daily and spiritual lives. Not only was he devoted to the people he helped, but also to the souls in purgatory who were in need of prayers and masses to be said for them. He had lead the life of a servant leader. Here is a movie link about the man called Padre Pio.


It was on September 23, 1968 that Padre Pio breathed his last. Thousands and thousands came to mourn his passing and to pay their last respects. At this time of the year, a great number of pilgrims go to San Giovanni Rotonda to commemorate his death anniversary. It's a pleasant time to go to this sacred destination. While the weather is mild, it gets to be crowded. In the winter time, it's cold and freezing, but you have the place all to yourself.  Whether you "meet" him in the spring, summer, fall or winter, allow yourself to get to know and to be inspired by him. He is a good example of what a man of God is. 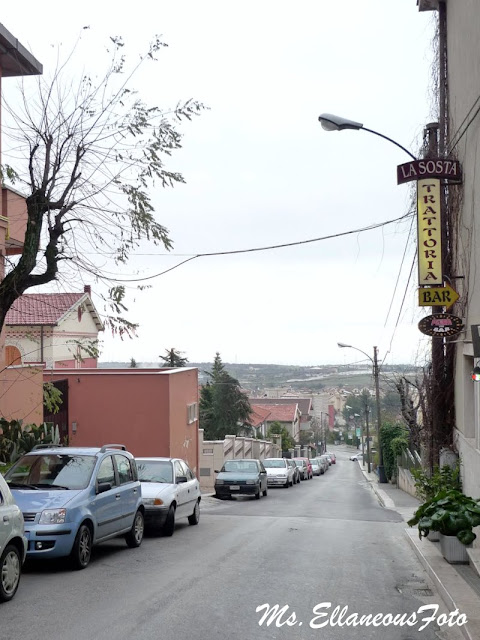 We found time to explore and walk around the town, to find and have lunch at Trattoria la Sosta - a restaurant known for their Italian country cooking. 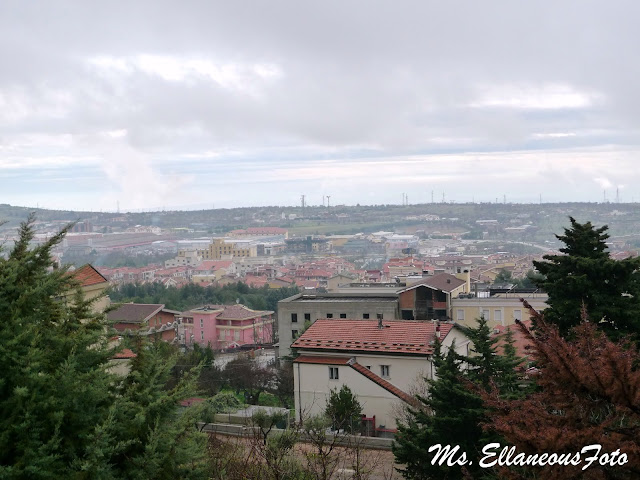 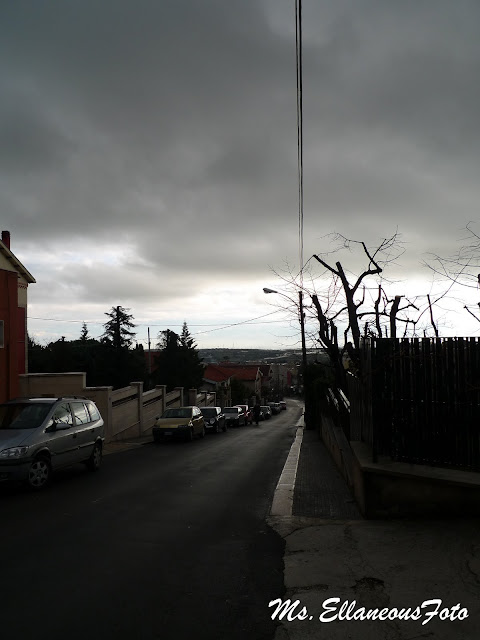 As we walked, we also got to see others parts of the city, while the weather was changing rapidly. 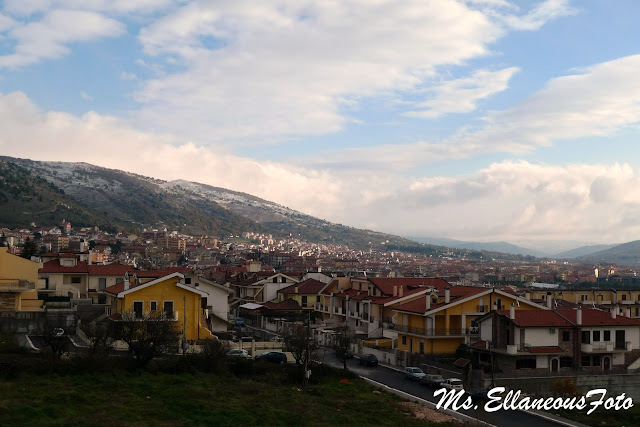 On our 3rd day, our last day, we were up early. We took pictures of the view from our hotel room. Here is a housing subdivision. 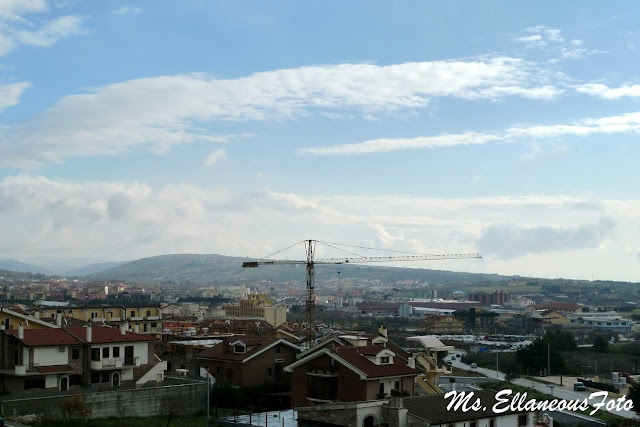 The presence of a crane tells of continuing development in the area.

After breakfast, we were back on the road again. As we drove through the country side, we took a last look at San Giovanni Rotondo. As planned, we were going to make 3 stops before heading to the airport. The drive out of San Giovanni Rotondo was about an hour to our first stop. We opted for an early, light lunch at Osteria Antica Piazzetta.

Back on the road, we looked forward to our next visit - the Church of St. Michel Archangel. By this time, the weather had turned to snowy-stormy weather. We'll continue the pilgrimage in my next post. Until then, let's pray for one another.
Posted by yolanda at 22:51