Sunday Mass at the Notre Dame de Paris, at Christmastide

For the Sunday after Christmas, we decided to hear mass at the Notre Dame de Paris Cathedral. This was the mass celebrating the "Feast Day of the Holy Family." We chose to attend the Gregorian Chant mass. The chanting was beautiful, meditative for the mass goers, even if the language was in Latin. It was melodic harmony that gave me the feeling like we were ascending to heaven. 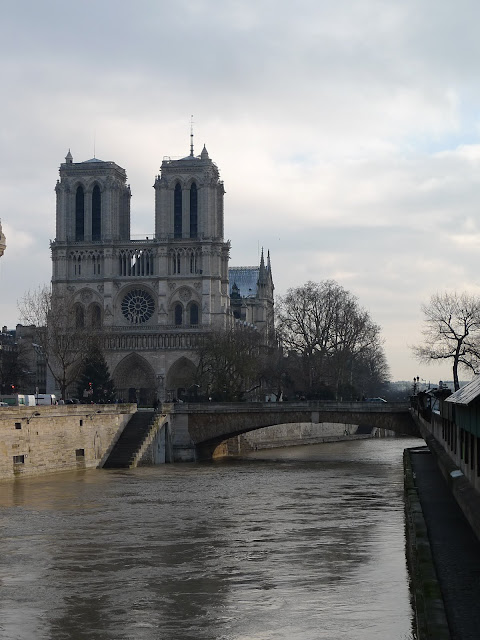 The Cathédrale de Notre Dame de Paris (Cathedral of Our Lady of Paris) is on the Île de la Cité, a small island in the Seine River. 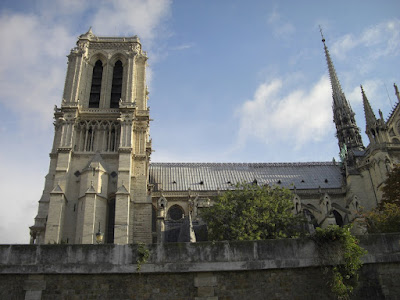 It is early gothic in design and it was an ambitious project that was carried out from 1163–1250, under Maurice de Sully, the bishop of Paris. 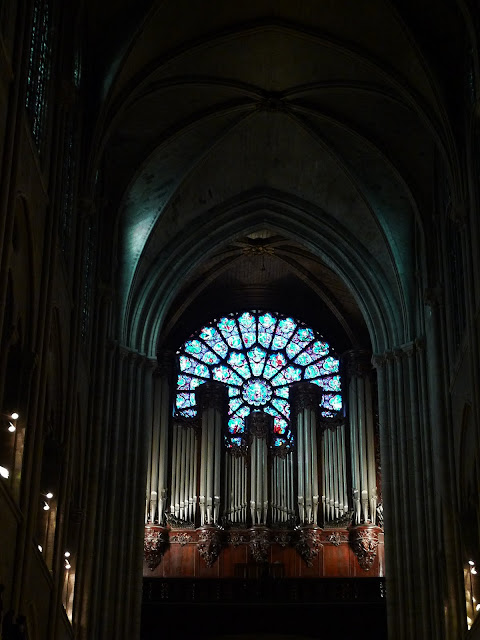 The Gregorian mass came to an end with a final organ piece, a rendition of something that sounded like "Bach's Toccata and Fugue in D minor." Behind the pipe organ is the WEST rose window. 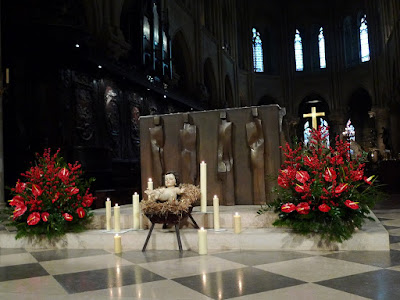 This being the season of Christmastide, the adoration of the Infant Jesus follows after the masses. 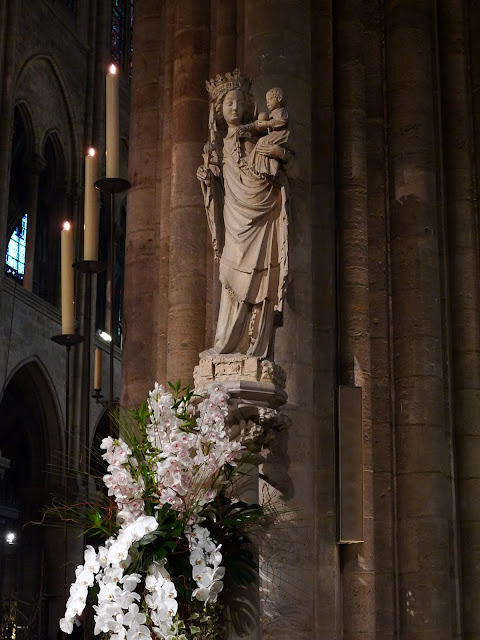 The much visited and revered Our Lady of Paris

After the mass, I shared with my family bits and pieces of what I had learned from a guided tour of the cathedral. 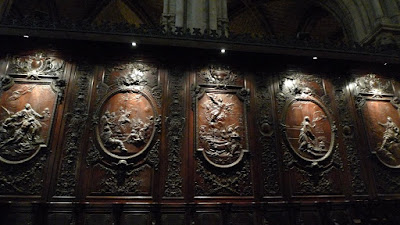 This detailed, intricately carved wood panels, ornate both sides of the the inner section behind the main, after-Vatican II altar, once used by the monarchy and their invited guests who were people of distinction, for their private masses. 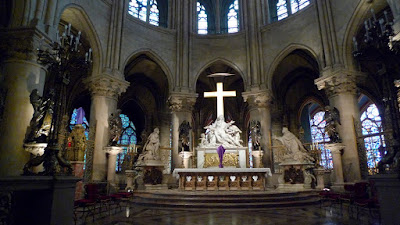 This altar, with a Pieta theme, was the one used for several hundred years. 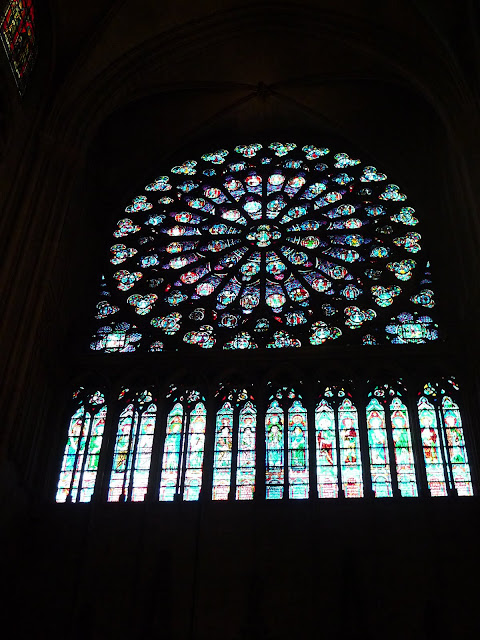 SOUTH rose window (c.1260); general themes are that of the New Testament, the Triumph of Christ, and the symbolic number four 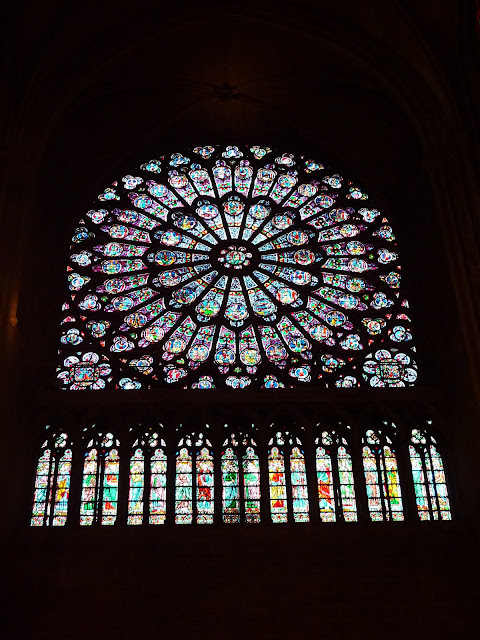 NORTH rose window (1250); main theme is the Old Testament, but the central medallion depicts the Virgin and Child.

Do you notice anything between these two rose windows? These windows have undergone repairs in the last centuries: in the period between 1725 and 1727, by Guillaume Brice; in 1861 by Viollet-le-Duc and Alfred Gérente. Viollet-le-Duc rotated the entire south rose 15° to create horizontal and vertical axes for better stability in the masonry. 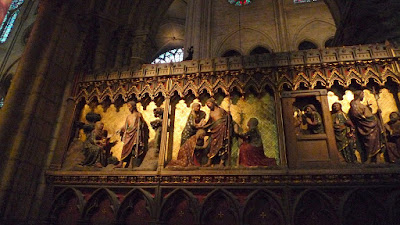 The life of Jesus is depicted in scenes in this diorama-like panels, going around the exterior wall of the inner altar section. The scenes are representative of the mysteries of the Holy Rosary prayer. 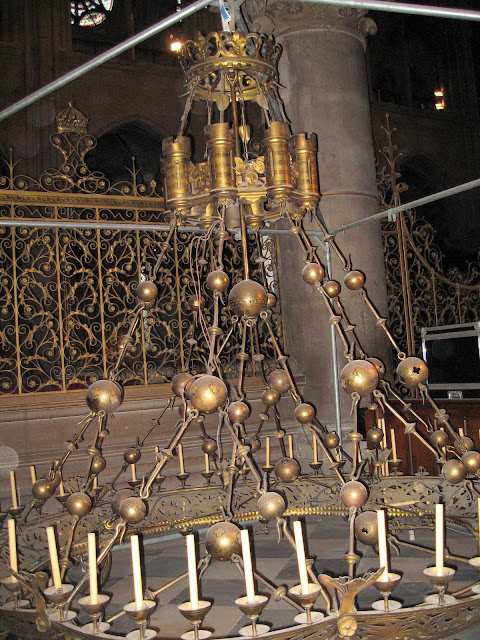 This was the Great Chandelier, or the Crown of Lights, that originally hang at the transept crossing. 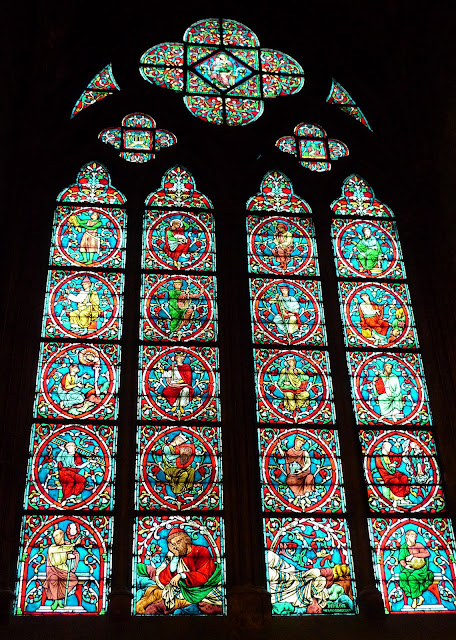 This is one of the few original stain-glass windows left intact, depicting biblical themes and stories. 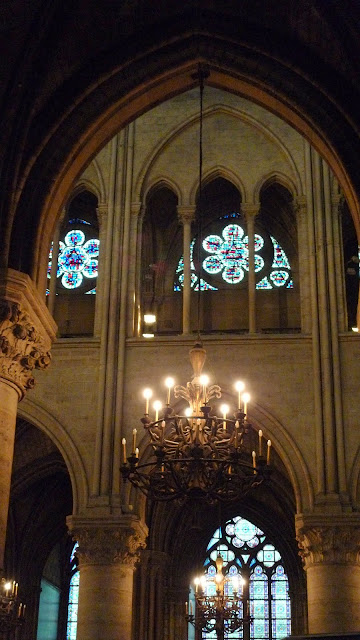 You will notice that the stain glass designs of mini rose windows on the upper walls are no longer original, and have been replaced with less ornate and more modern style designs. This is one of several oil paintings that was given to the church, a thanksgiving offering for having a successful, lucrative means of livelihood, commissioned by a specific organization of tradesmen. And soon, the Christmastide season, one of the seasons of the liturgical year of most Christian churches will come to an end. By definition, this is the period from Christmas eve to the evening of January 5th, the day before Epiphany. This period is also commonly known as the "Twelve Days of Christmas," which must have been the inspiration for the Christmas carol.


The cathedral will always be there for you to visit at any time of the year. We, next, look forward to the season of lent, culminating in the Easter celebration, when the veneration of the Holy Crown of Thorns and several nails used at the crucifixion are displayed every Friday at 3:00 p.m., or every first Friday of the month.


I pray that your families will be guided and protected by the Holy Family.
Posted by yolanda at 19:47