A Day Trip to Florence

Florence (Firenze) is one of the most beautiful cities in Italy. It is the capital city of the Tuscan province. It has less than half a million inhabitants but boast of attracting a big number of tourists, each year. I learned much from our visit here several years ago, when my daughter was taking up an architectural course as part of her study-abroad program. Coming for a day trip brings back bits and pieces of what I discovered, then, about this place.
Florence played a prominent role in the Middle Ages and in the Renaissance, particularly with the growth of art and architecture. It was a center of medieval European trade and finance and was one of the wealthiest cities of the time. It is considered the birthplace of the Renaissance and came to be known as the "Jewel of the Renaissance". A part of their turbulent political history was under the Medici family, during the middle ages, a period also characterized by religious and republican revolutions.
When coming to this city, one is exposed to music, architecture, education, cuisine, fashion, philosophy, science and religion that flourished during the Renaissance period. The city center has numerous places of interest to visit - elegant squares (piazzas), Renaissance palaces (palazzi), academies, parks, gardens, churches, monasteries, museums, art galleries, ateliers, and I would add stores to satisfy one's shopping desires. A wide range of art collections are exhibited in the Pitti Palace and the Uffizi.
The "Who's Who of Florence" names some notable historical figures, such as Dante, Boccaccio, Leonardo da Vinci, Botticelli, Niccolò Machiavelli, Brunelleschi, Michelangelo, Donatello, Galileo Galilei, Catherine de' Medici, Luigi Cherubini, Antonio Meucci, Guccio Gucci, Franco Zeffirelli, Salvatore Ferragamo, Roberto Cavalli, and Emilio Pucci. They were either born there or they chose to make Florence their home. Florence is the last preserved Renaissance city in the world and is regarded today as the art capital of Italy.
http://en.wikipedia.org/wiki/Florence
So, we were back in Florence, just for a day. As soon as we got to the train station, we headed to the restaurant specially chosen for another birthday celebration... 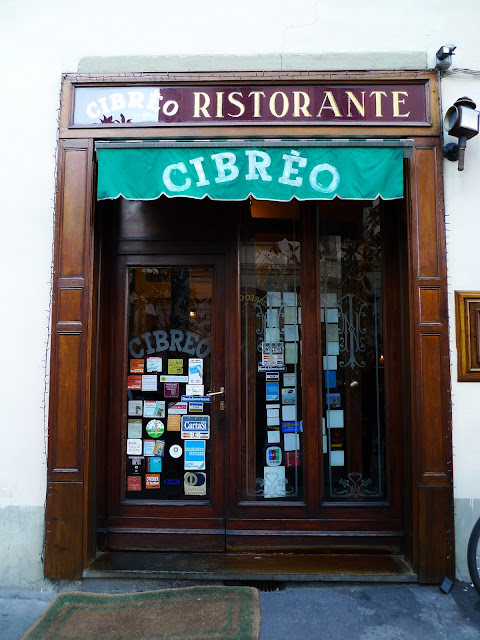 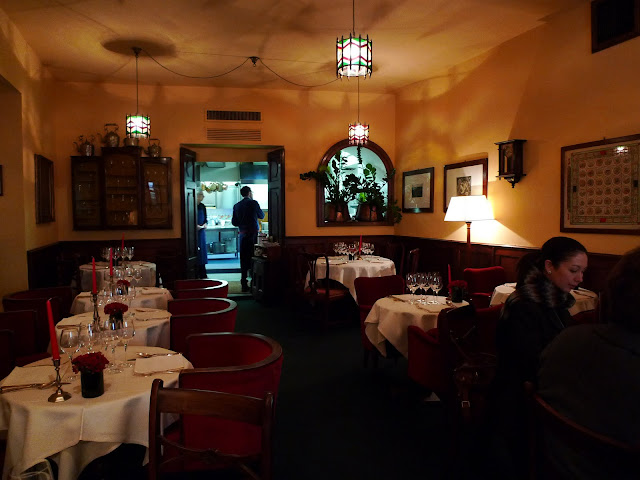 at "Il Cibreo" in the Santa Croce quarter, for some authentic local cuisine presented in a more artsy manner, from start to finish, in an old-fashioned, charming setting. 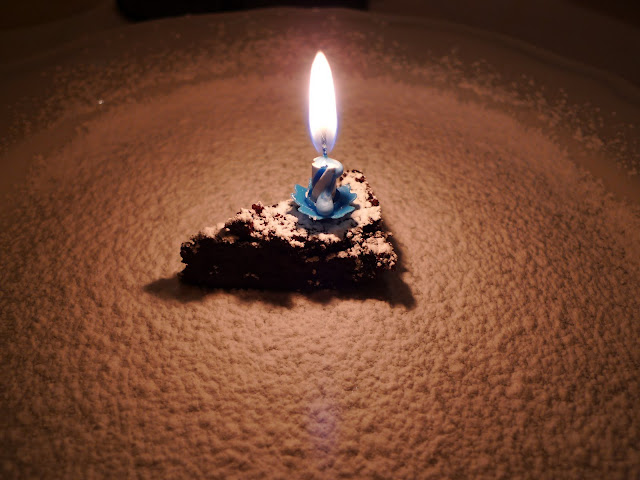 When it was time to sing "happy birthday," this piccolo flour less-chocolate cake, one inch long, was brought to the table! And I enjoyed all of it!
After lunch, we just had a few hours left to catch the train back to Rome. Off on a walking tour... 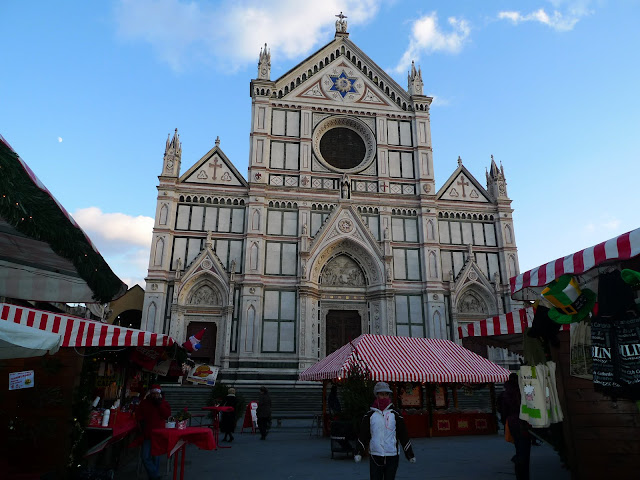 we passed by the Basilica di Santa Croce (Basilica of the Holy Cross), the principal Franciscan church in Florence, where some of the most illustrious Italians, like Michelangelo, are buried. There was a Christmas market set up in the piazza, right in front of the church. 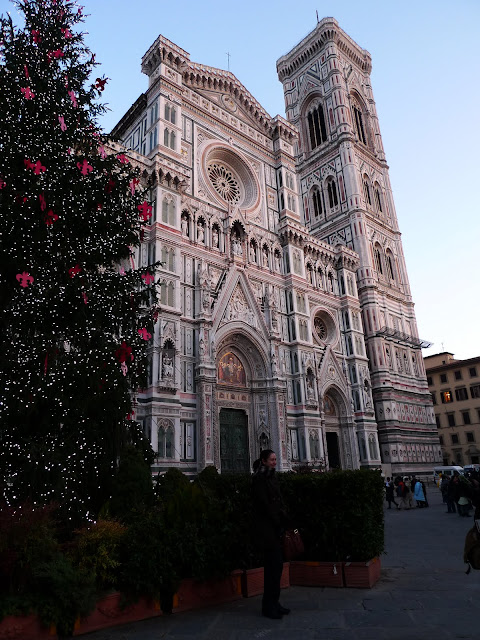 The best-known site and crowning architectural jewel of Florence is the domed cathedral of the city, Santa Maria del Fiore, known as The Duomo. 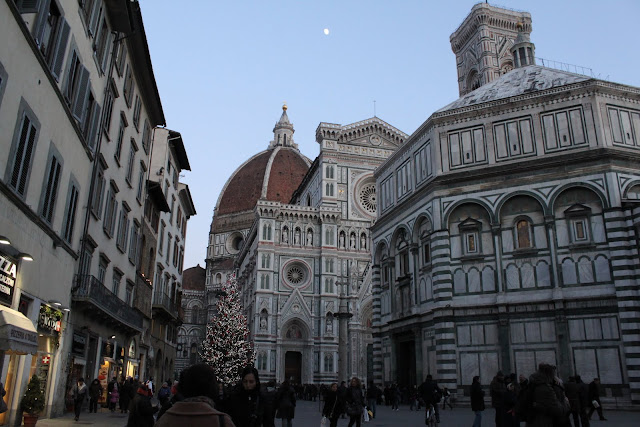 The magnificent dome was built by Filippo Brunelleschi. The nearby Campanile, which was partly designed by Giotto and the Baptistery are also points of interest for the visitor. 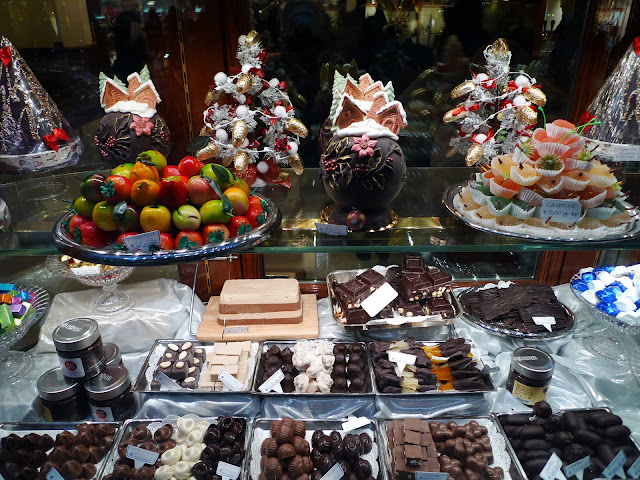 Italian confectionary from Scudieri, at the Piazza Duomo, located very near the Baptistry. 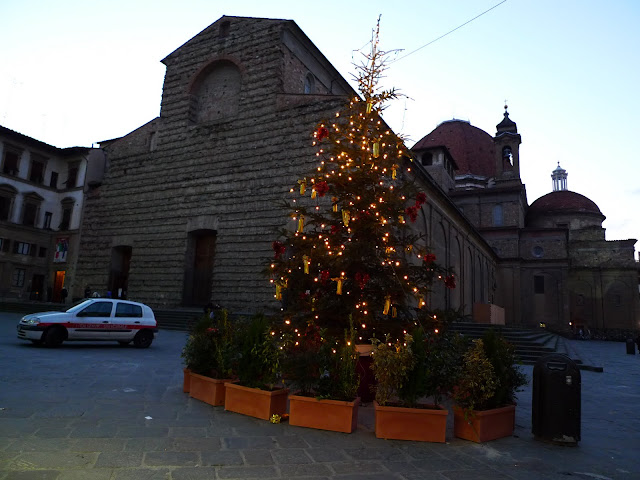 La Basilica di San Lorenzo (Basilica of St Lawrence) contains the Medici Chapel, the mausoleum of the Medici family – the most powerful family in Florence from the 15th to the 18th century. Nearby is the Uffizi Gallery, with one of the finest art collection in the world. 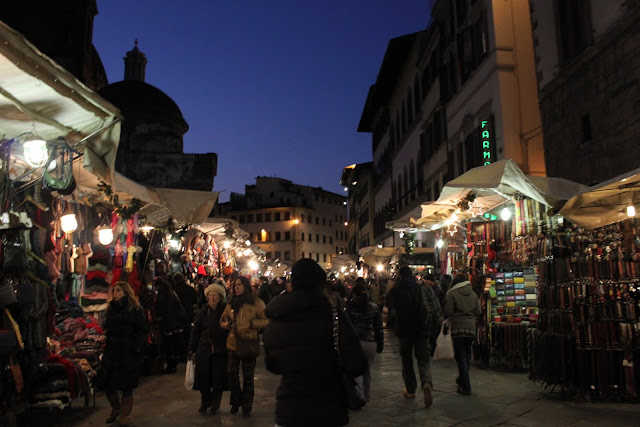 The San Lorenzo street market is the market of all markets to go to in Florence. Prices are much more reasonable. You can find a vast variety of goods, such as... 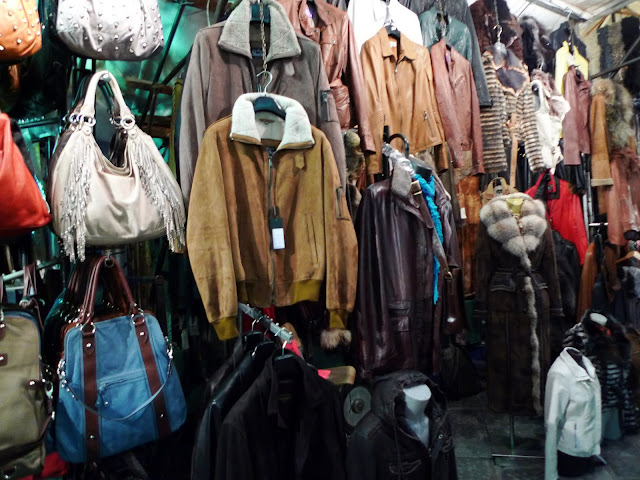 an assortment of leather goods of fashion accessories and garments 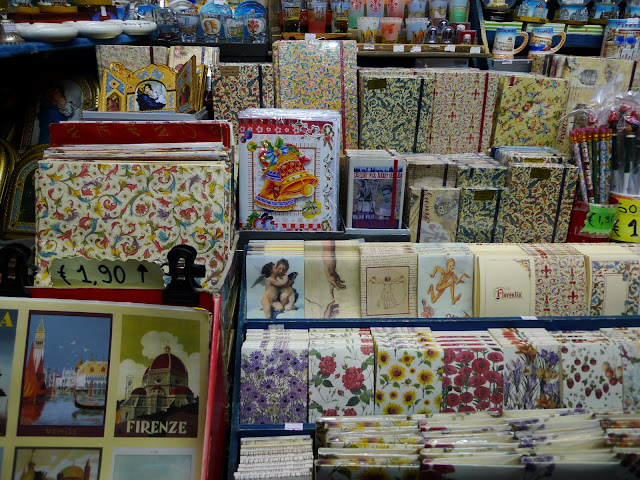 The stationary paper designs are one of the specialties in Florence. 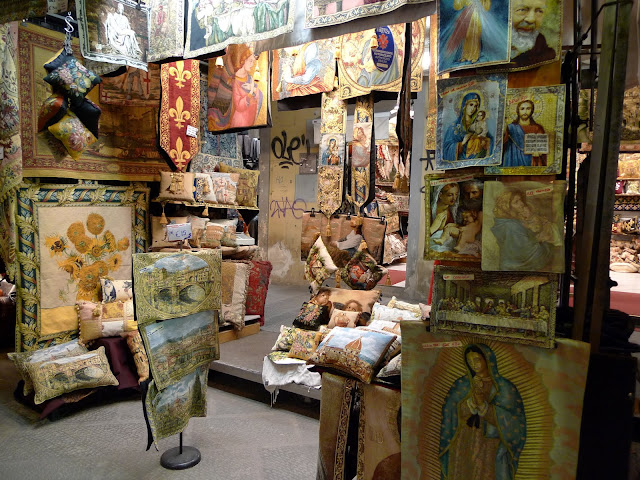 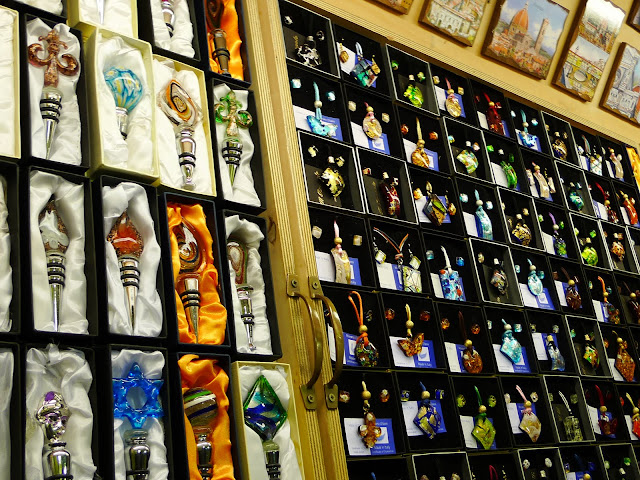 We spent the most time here, choosing murano-glass jewelry for our family and friends. 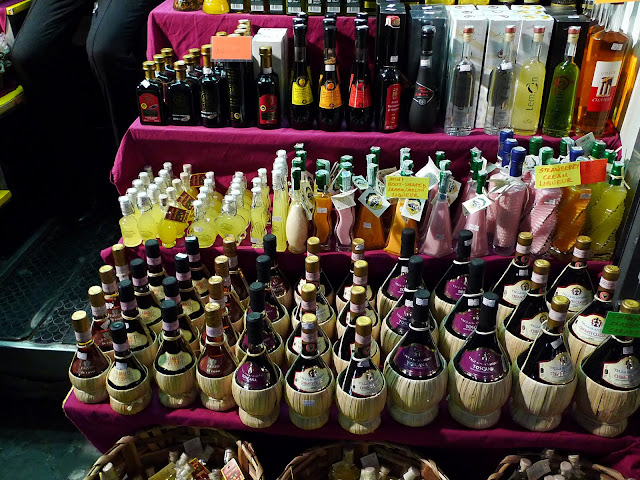 This stall had all things Italian for your cooking needs. 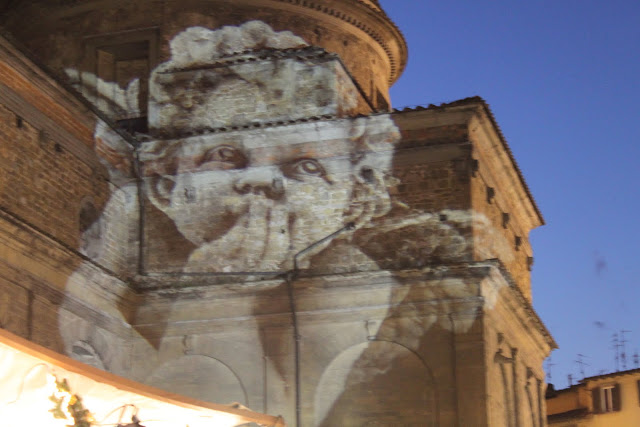 By early evening, this cherub was projected on the church's wall. That was a very nice, angelic touch. 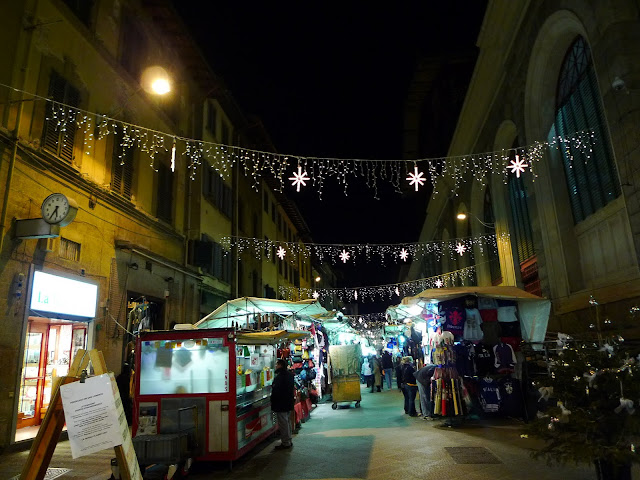 As the street Christmas lights went on, it was time for us to head back to the train station. 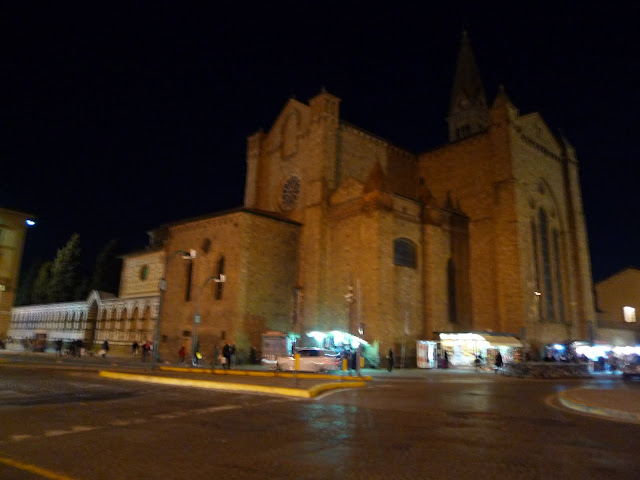 By the time we passed by the Basilica of Santa Maria Novella, we were just a couple of minutes away from the station, rushing. Yes, we made it to the train on time. But, our 1 1/2 hour train ride took four hours due to rail-track congestion to Rome!
If you plan to visit Florence, do stay longer than a day. The city has so much to offer. You would truly enjoy it.
Posted by yolanda at 16:48