Of all the Christmas markets I have gone to this year in Paris, I rate the market at La Défense as the best one. Even on a cold, mid-week day, with the threat of rain and snow, we were not deterred, just like the others, to come to this Christmas market.The selection of items carried by the vendors brought a melange of interesting items for the shopper working with a Christmas list. The arrangement of the stalls was so well organized in one big square, that it was easy to go around or go back to something that had previously caught our eye. 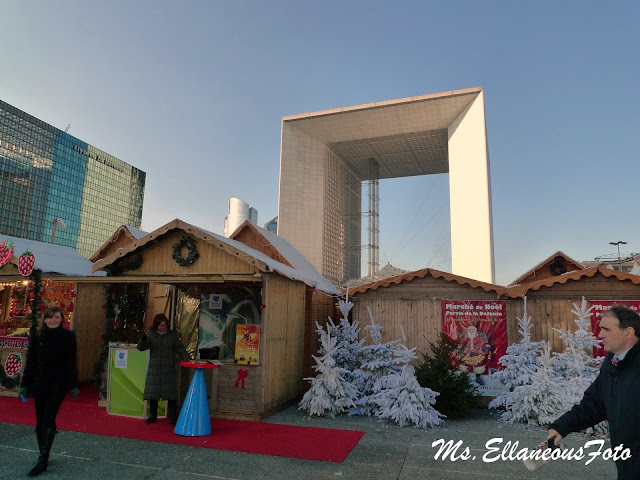 The Christmas market is set up at the parvis of a very distinct landmark, the La Défense Building, also known as La Grande Arche. When up at the Eiffel Tower, you will see that this building is on the same axis as the Arc de Triomphe on the avenue des Champs Elysees. 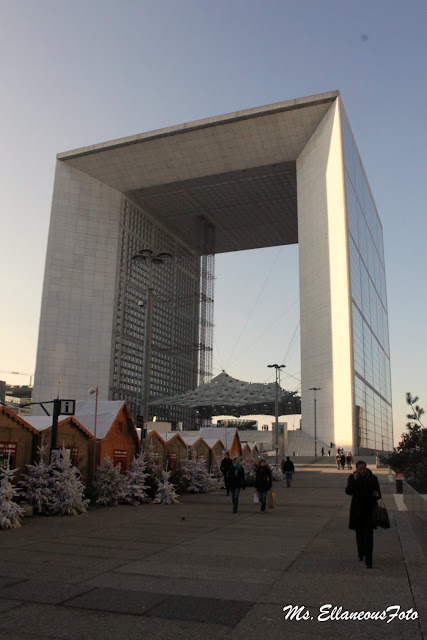 La Défense is a modern style skyscraper, government office tower. Architect Paul Andreau oversaw the project which was began in 1982 and was completed in 1990. It is clad with marble, on the exterior. The square arch rises to 110 meters, with a fabric canopy and transparent tube elevator under the huge square arch.

The surrounding buildings were interesting architectural sculptures, creating a skyline reminiscent of other cities, like New York, Makati, Hong Kong. 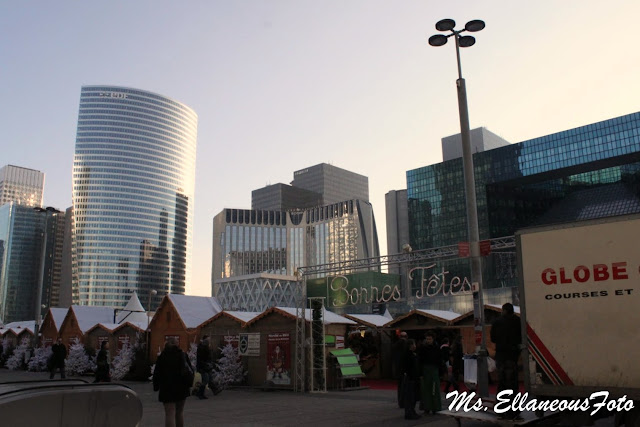 Having found several shopping malls around the square made us change our shopping schedule for the day. We ended up doing grocery shopping, as well. 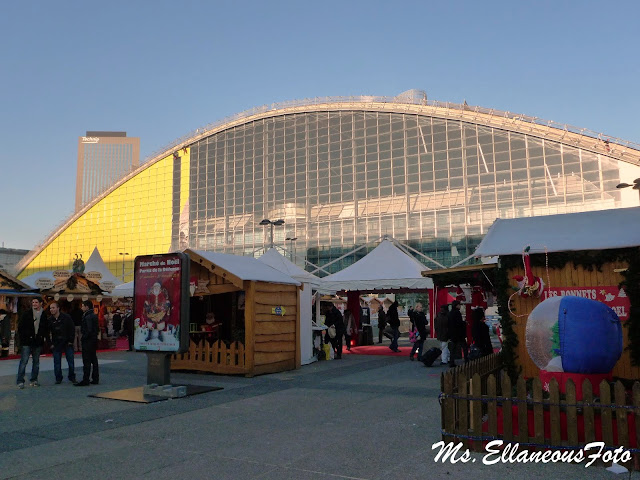 On this side of the square, bound by this building, our eye caught a side show that was going on... 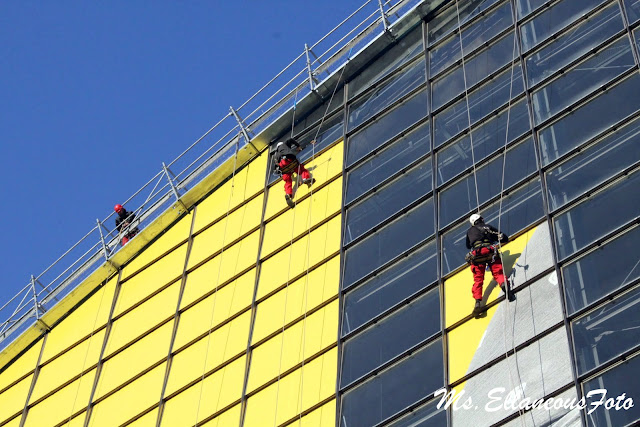 two men who were harnessed, were slowly scaling down the front part of the building as they peeled off the yellow plastic sheets that covered the glass-paneled wall. 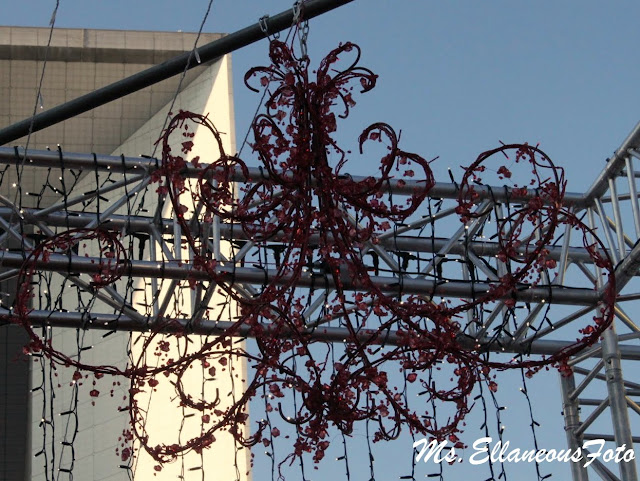 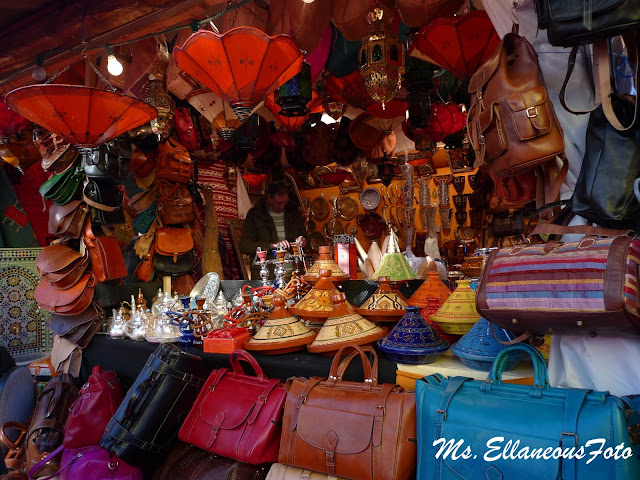 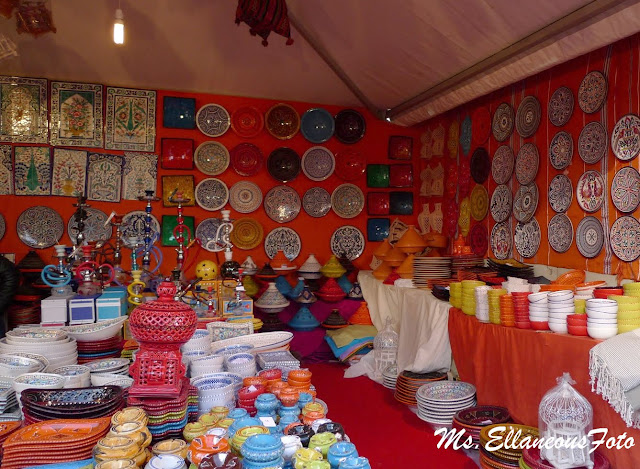 Seeing these goods reminded me of the bazaar and markets in Istanbul. 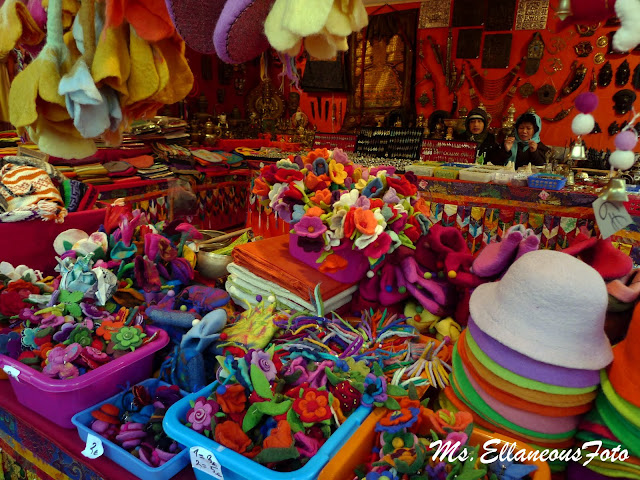 The Tibetan vendors brought their crafts, jewelry, and fashion accessories. 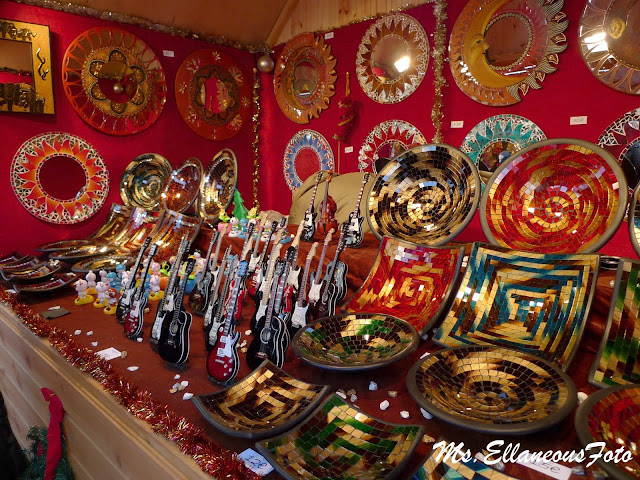 These mosaic ware and decorative items were so attractive. 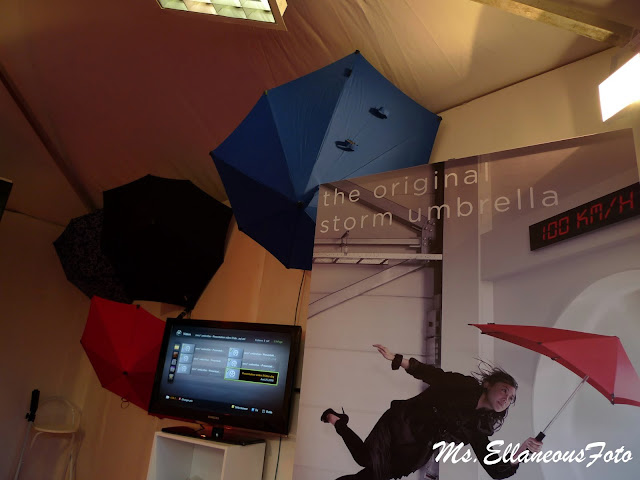 What an innovative design! These uneven umbrellas are designed to keep you under cover during a snow storm. 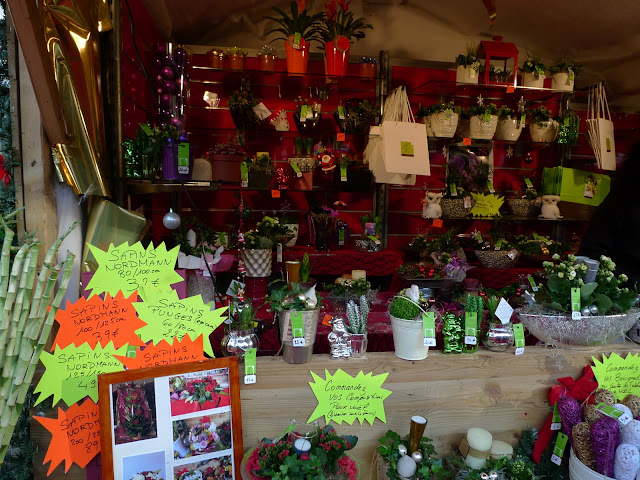 Going green this Christmas? These Christmas-themed plant arrangements are perfect for gift-giving.
The aromatic flavors if the food being prepared and served were floating in the air. 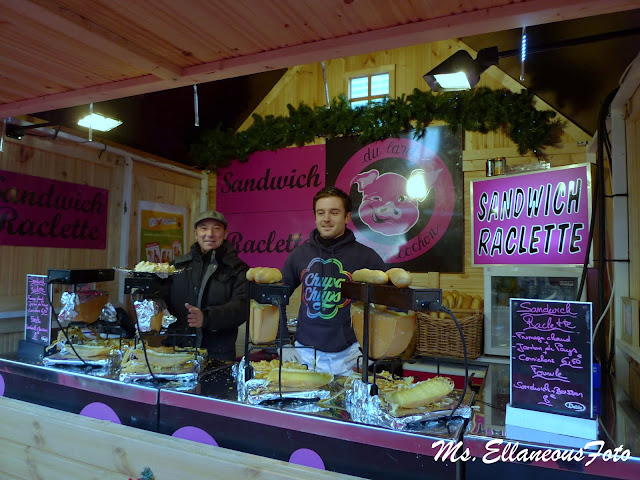 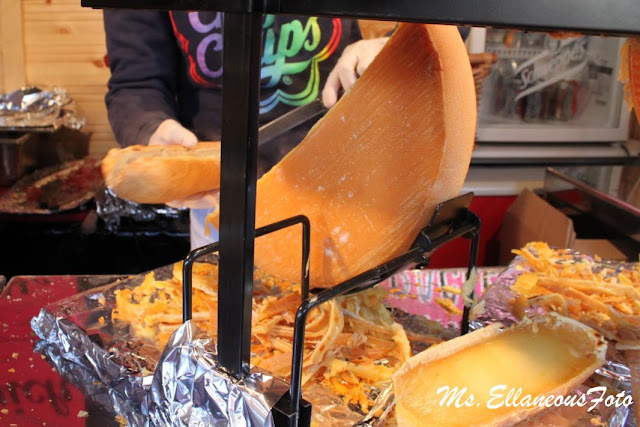 The smell of the raclette cheese melting under the light lamp caught our attention. 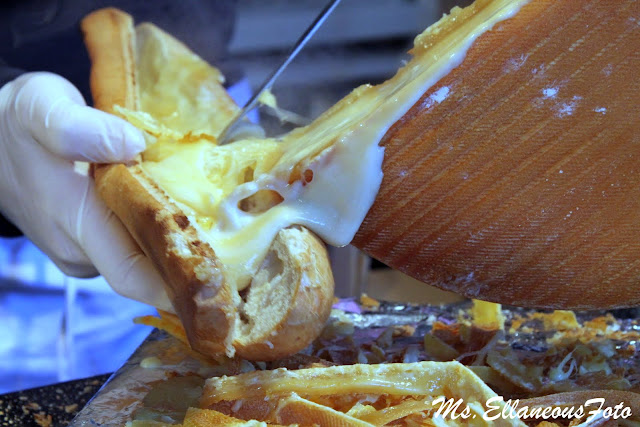 After an order was filled for another customer, we simply could not resist. 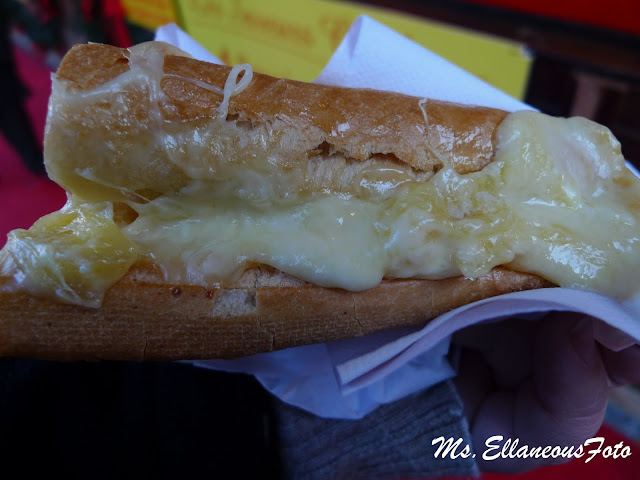 My daughter and I ordered one, too, and it was so yummy!!! We considered getting another one...but on second thought, no! 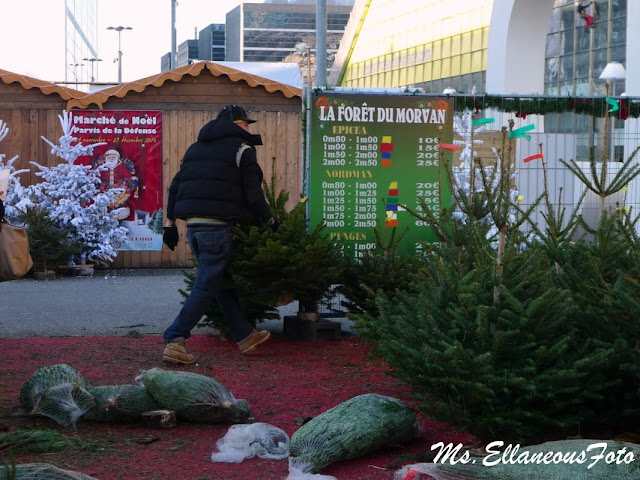 This Christmas tree lot brought back memories of when I used to take my kids to help me choose and haul a tree. 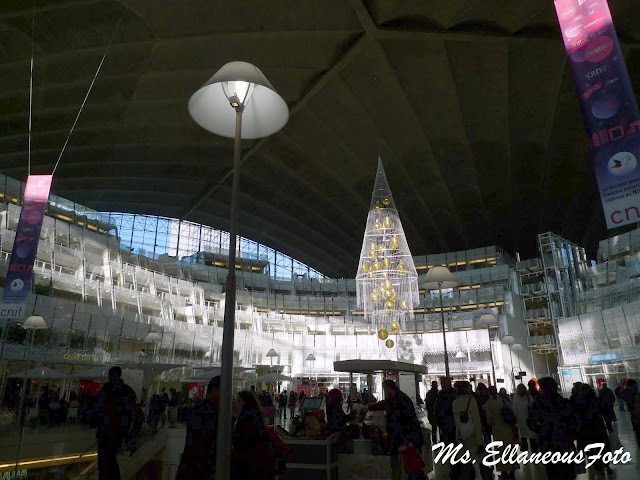 We took some quick stops at this gallery of stores, then we walked back to the metro station to avoid the after-office-rush-hour crowd. 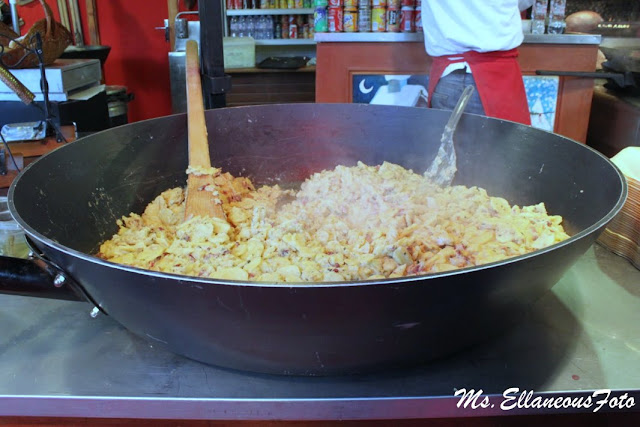 Visions of the tartiflette "remained" in our palates while we were on our train-ride to go home. I decided that it was going to be our home-made dinner...it was quite easy to prepare:


INGREDIENTS:
1. 2 medium-sized onions (or more if you like), sliced thinly and caramelized in a teaspoon of butter and a teaspoon of vegetable oil


2. Add 1 pound of peeled and sliced potatoes, and let them steam (on their own juices) on a covered pan, for a couple of minutes at medium-low heat, until the potatoes are softened.


3. Add salt and pepper to taste


4. Turn the flame to "low," add half a pound of cut-up Reblochon cheese (I removed the outer, waxy sides) and cover the pan, and wait for a couple of short minutes for the cheese to melt, stirring once or twice.
Plate the tartiflette for serving, with pieces of baguette.


That was so good and filling. It's another comfort food to savor on a cold wintry day!
Posted by yolanda at 04:44