After having our original flight canceled, due to the eruption of the Eyjafjallajökull volcano in Iceland this month which choked air travel to Europe , my daughter and and I finally got on our way. Before leaving, one of my friends called to wish me goodbye and to tell me to enjoy the view from up there as the scenery would be beautifully colored, as a result of the presence of volcanic ash in the atmosphere. After taking off at about 7:05 p.m., I fell asleep for a good 15 minutes.
When I woke up this was what I saw through the window. 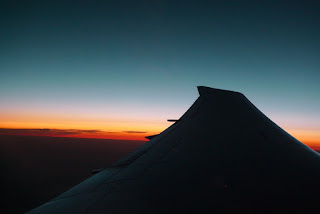 I moved over to the window-side seat and got out my little toy - my point-and-shoot camera, and began clicking away. I noticed the black streaks in the horizon and concluded that they were volcanic ash. 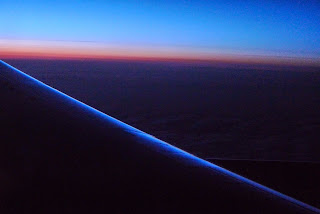 The colors were so vibrant...beautiful complimentary colors. I thought the reflection on the wing was a tinge of blue, on the turquoise side.
Then, dinner was served. That interrupted my sky-viewing enjoyment.
Later, the choice was for me to watch a movie or go to sleep. Well...my age decided for me! 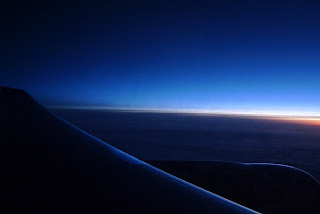 I soon woke up...It was almost morning time in Europe, breakfast was being served,
and the sun was rising! 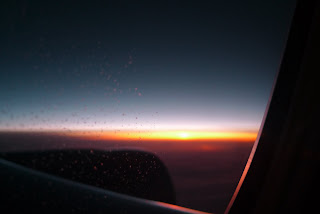 Ice crystals had formed on the window... 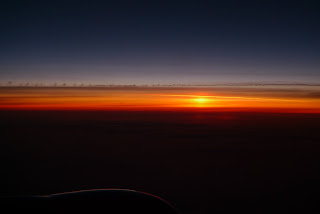 and the black streaks got even more noticeable! 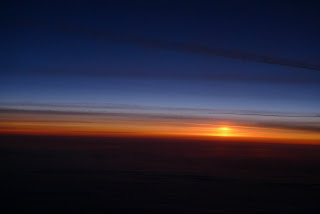 What could that black line of concentric circles be? 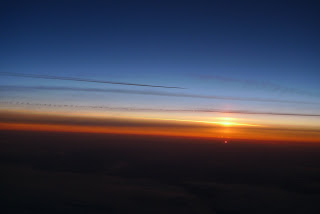 As the sky brightened a bit more, I was able to see better. There was a jet plane at the beginning of that black line. I guess it's exhaust from the engines was having a reaction with the volcanic ash to form that dark line...I saw two of these! 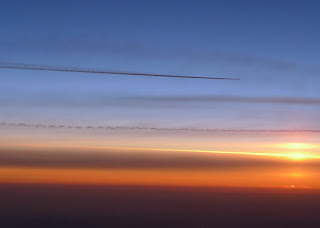 Can you see the outline of the plane now? 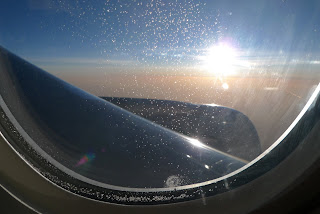 In a matter of minutes, the sun was up, which was about the time we were descending from 35,000 feet! 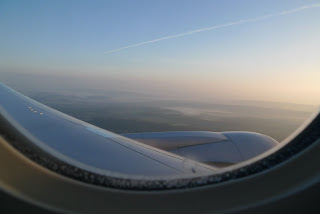 Below the clouds, the effects of the volcanic ash in the atmosphere could no longer be seen and the jet plane's exhaust was white. 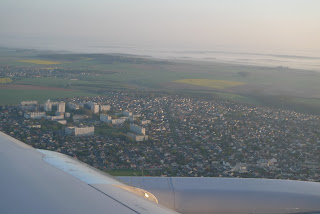 Right before we touched down, the captain announced that it was 7°F and a bit foggy, but clear enough to see the quilt-like patch on the ground of yellows from the mustard flowers, greens from other vegetables plants, and a community in a developed village in the middle of the open field. And finally, we arrived at CDG!
Posted by yolanda at 06:59