A Picturesque Paris: A Snowy Day in the City

Yesterday, we woke up to find that the city was blanketed with a light dusting of powdery snow...and that was a good reason to get out in -6°C temperature, to see how the look of familiar places had changed... 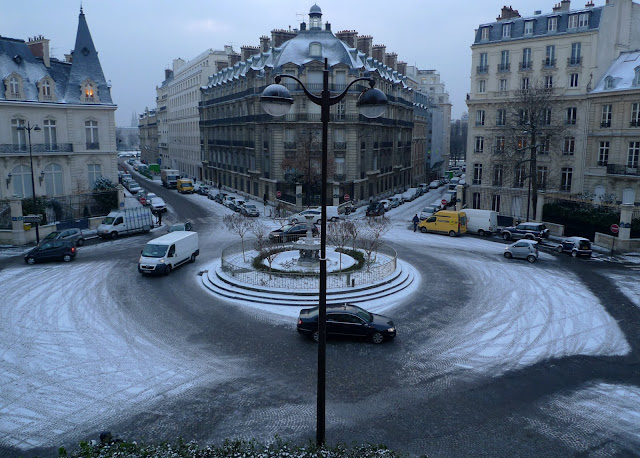 on the street where we live... 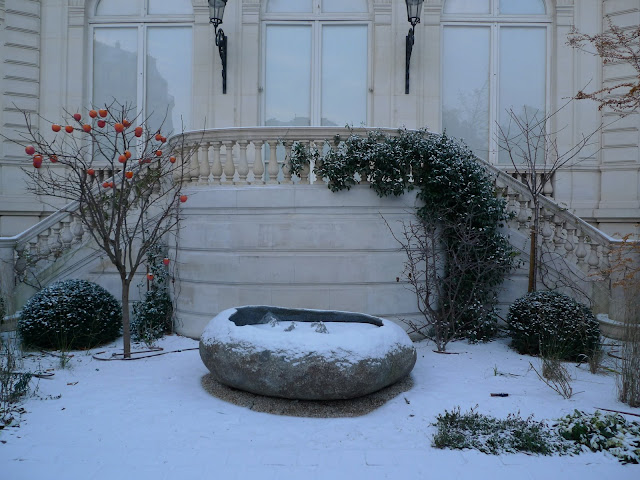 an entry to a known French personality's home...where the persimmon fruits look like tree ornaments... 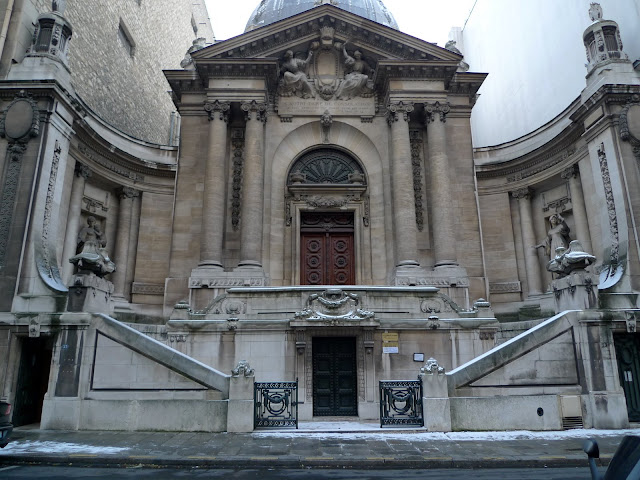 the church where I do my flower ministry... 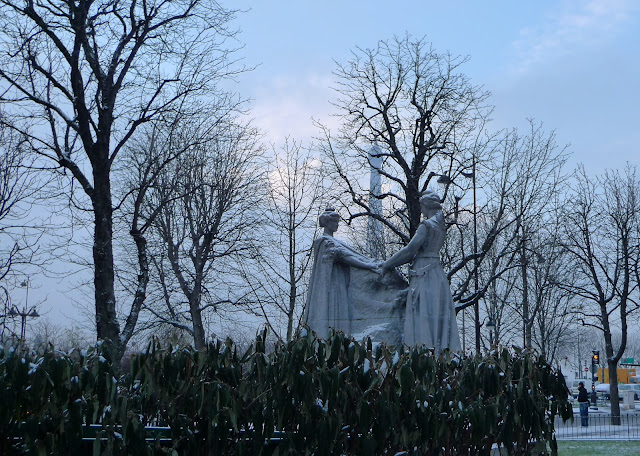 as we walked to our destination point: le Tour Eiffel. 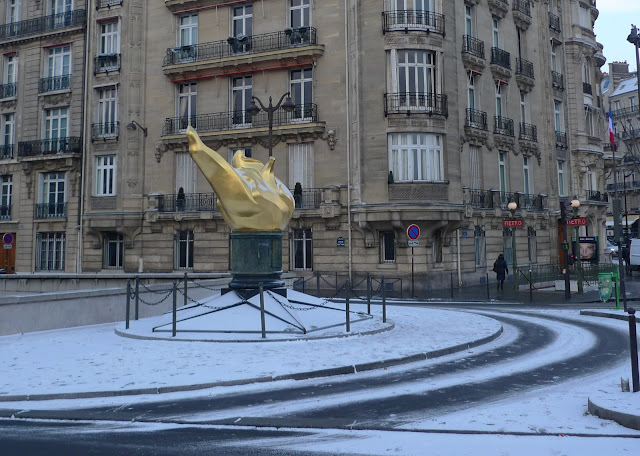 In front of this golden flame, by the entry to Pont de Alma (bridge) is the informal memorial set up to honor Princess Diana, who had passed away, underneath this spot, on the roadway. 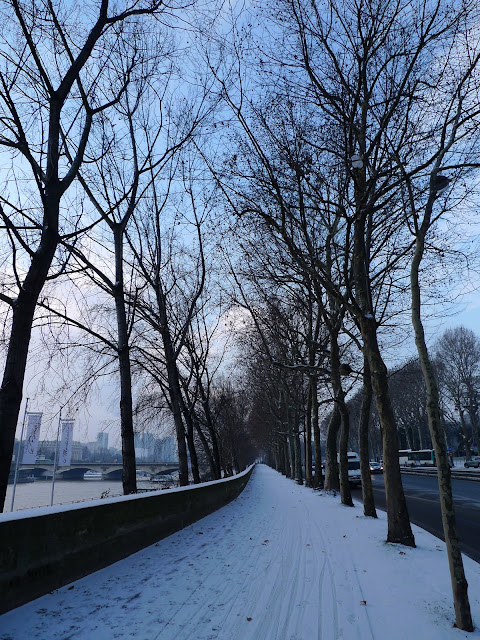 We retraced the steps we took to go to the new year's eve welcome celebration, along the Seine River. 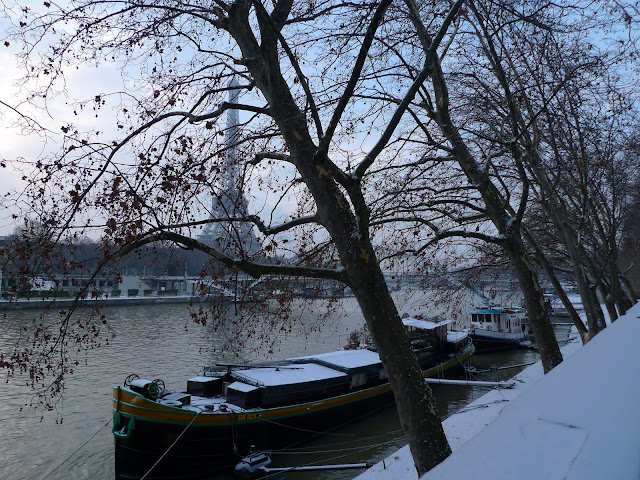 Here are some boathouses along the Seine...a pricey place to moor your boathouse. 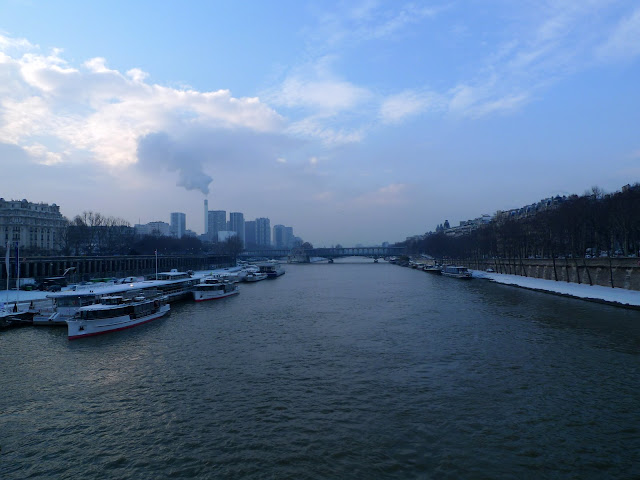 To the left side of the Seine is the Eiffel Tower disembarkation point, for visitors who come cruising on the Bateaux Bus (water bus) or on any other scenic boat ride. 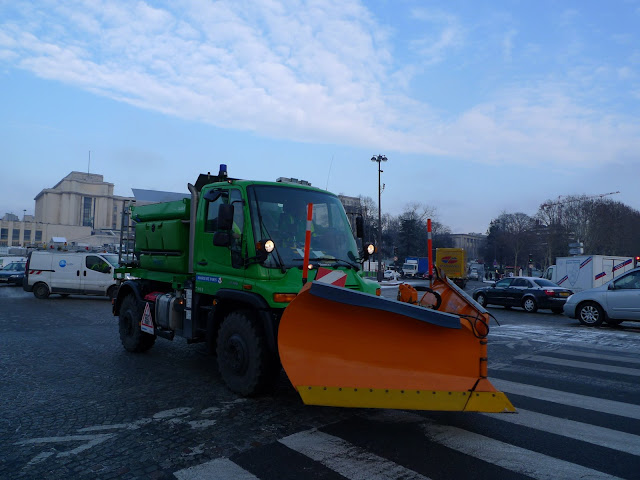 The snow plow beat us to the punch... 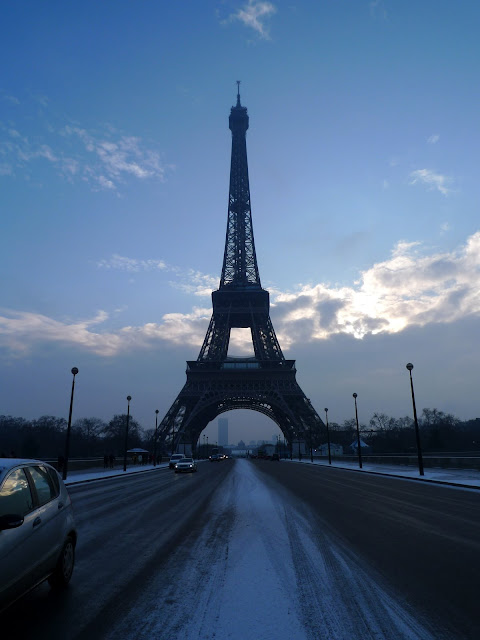 as the bridge leading to the tower had been cleared of snow. 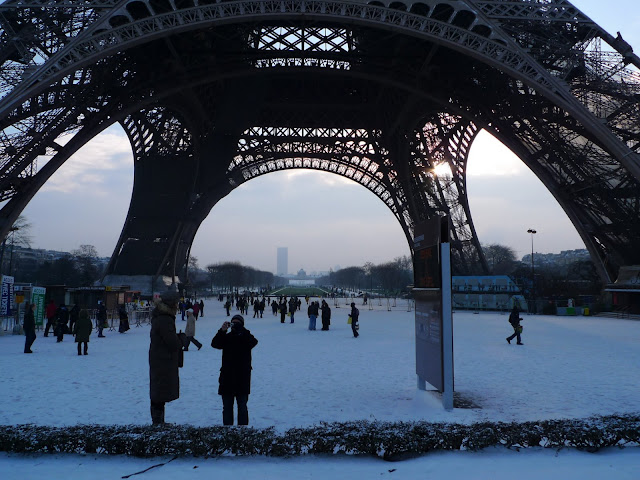 At this point, I remembered Haussmann - the architect of the city of Paris, as I noticed the position of some monuments. Note the small structure at the perspective point of this photo...that's the Ecole Militaire.... 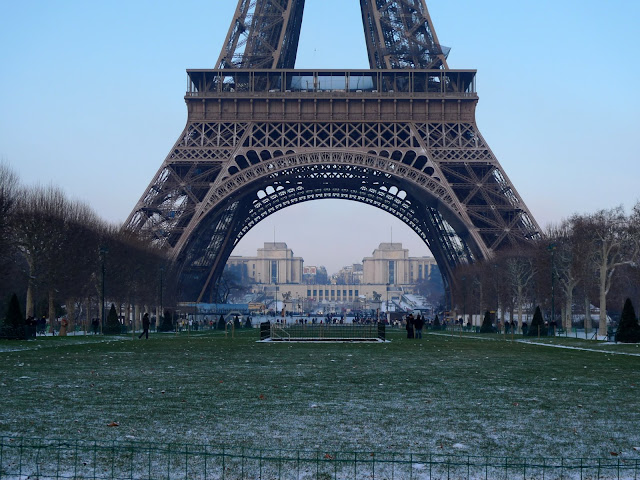 and le Trocadero is directly across. Baron George Eugene Haussmann was commissioned by Napoleon III, in 1852, to renovate Paris. 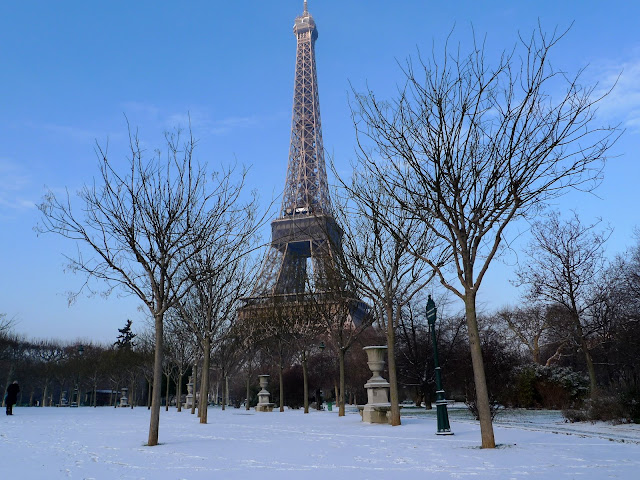 After one more look at this place, my daughter suggested that we go to Printemp, the department store, to check out the panoramic view from their top floor, at La Terrase restaurant.

Back to Haussmann...his urban planning to renovate the medieval city of Paris and the surrounding districts included many aspects, such as cutting through medieval alleys, new regulations on facades of building designs, public parks in neighborhoods and along the boulevards, sewers and water works and other city facilities, and public monuments which were designed and situated in some patterned alignment. 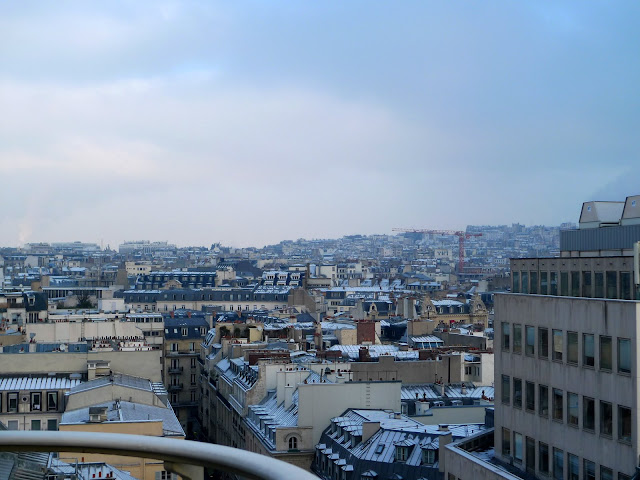 Out the door and to the terrace, this was the first view I had...of buildings without the typical Haussmannian look. As I looked around, I began to recognize some building monuments. 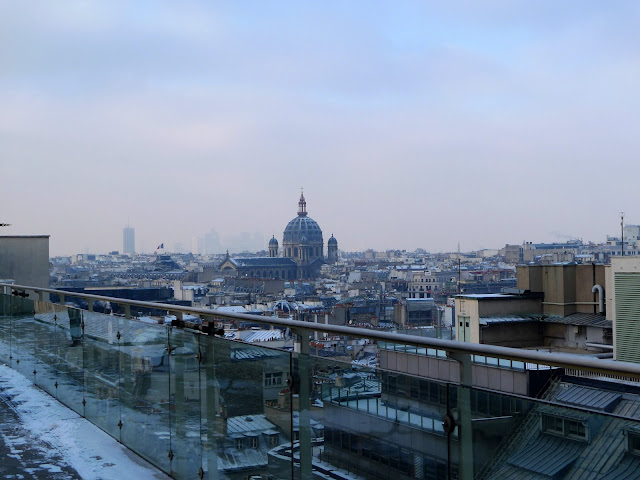 That's the dome of les Invalides , where Napoleon is buried. 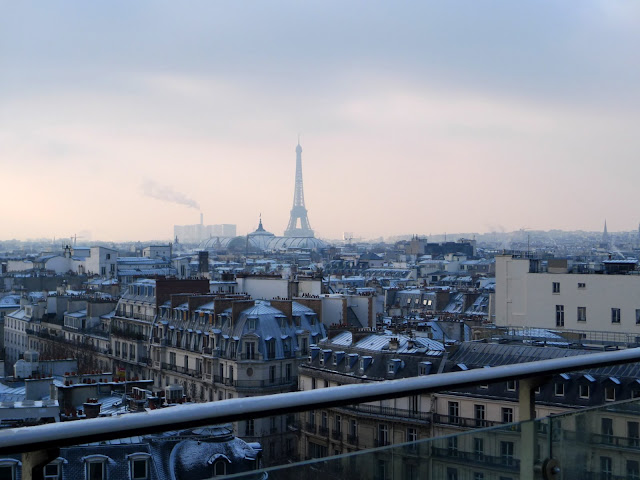 Of course, you recognize the iconic French monument in the background! 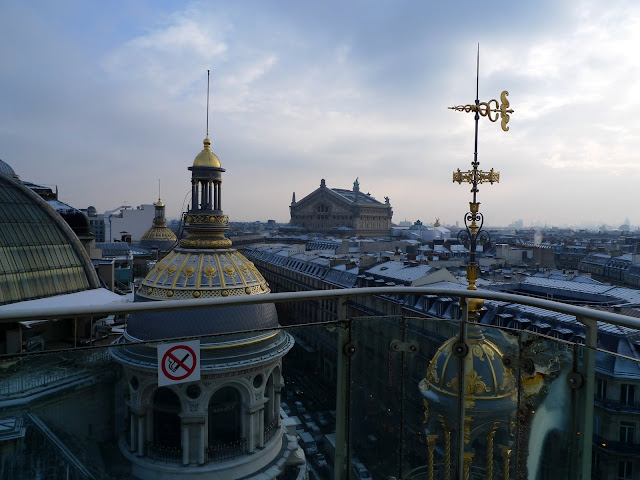 There's the back view of the top of le National Opera de Paris, le Palais Garnier. 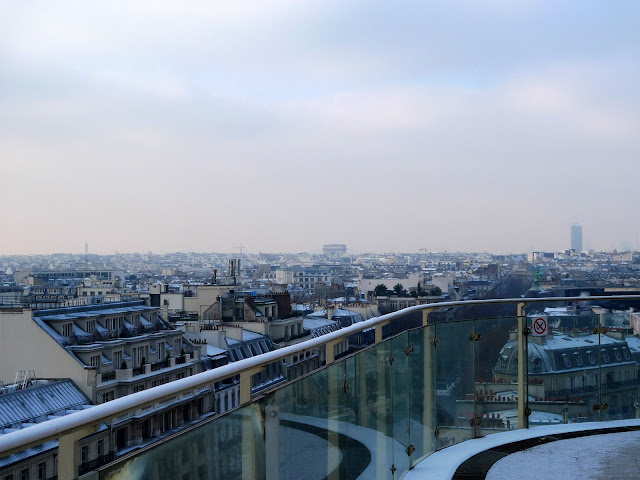 At the perspective point of this picture is the Arc de Triomphe... 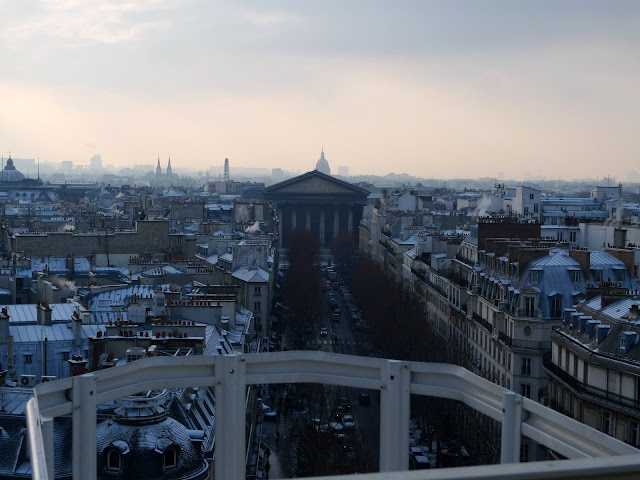 and here, you can see l'Eglise de Madeleine (church), back side view, at the center. 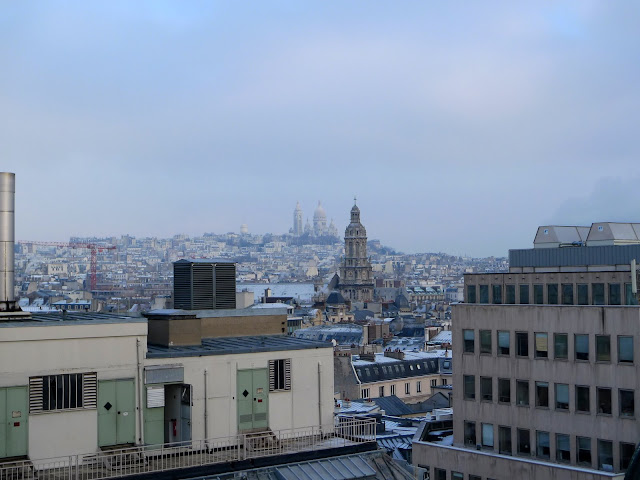 In the distant background is la Basilique du Sacre Couer , also known as the cake in the sky as it noticeably stands out when you drive into the city from the CDG airport.


Although, Haussmann was strongly criticized by some of his contemporaries in modern city planning. Today, he is widely credited for his revolutionary ideas in urban planning and for having given Paris its present look and form, with its long, straight, wide boulevards, dotted along by cafés and shops. This new type of urban renovation made an influence on the Parisian way of life then and now, and for the tourists who come all year round.

Haussmann's influence is also present in the planning of the cities of Washington D.C. and Chicago. And presently, so many cities have adapted having outdoor cafés and shops in different states from New York to California, in other European countries, and in Asia, from what I have seen. 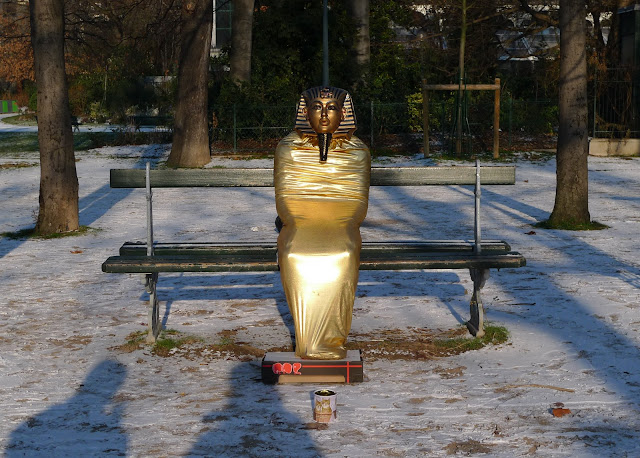 On our way home, we found this Egyptian mummy sitting out on a cold bench... 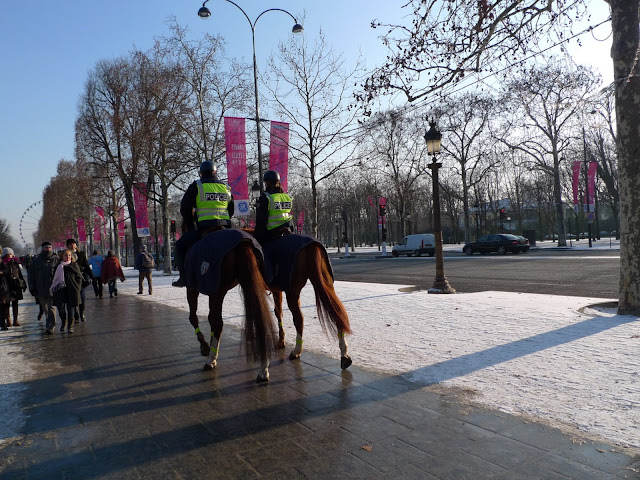 while the police were patrolling on horseback. 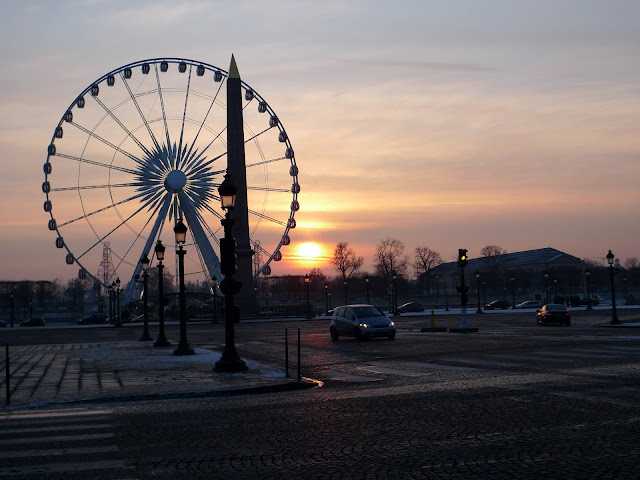 Today the forecast was for more snowfall. But it was milder than the day before and the sun was up...a perfect day to meet up with a friend for breakfast, near the Place de la Concorde. 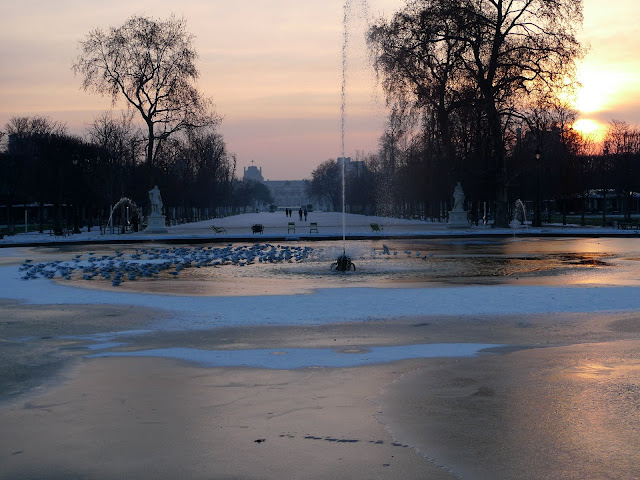 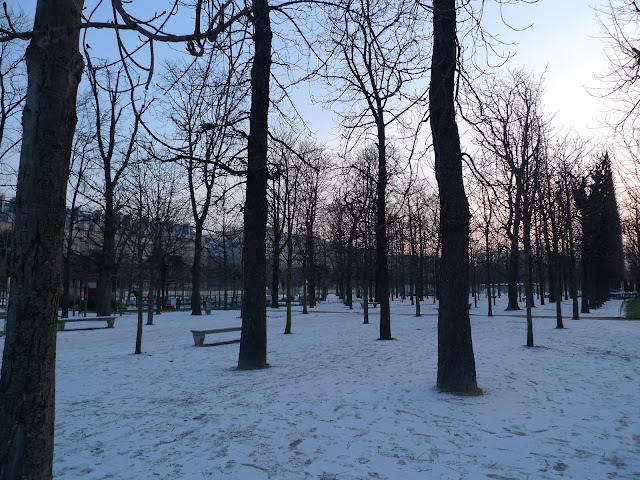 While walking, we decided to cut through le Jardin des Tuilleries, which is centrally located between the Louvre and Place de la Concorde, re-designed and renovated between 1660 and 1664 in French formal style by André Le Nôtre, the celebrated gardener of the Sun King who is best known for his design of the Versailles gardens. 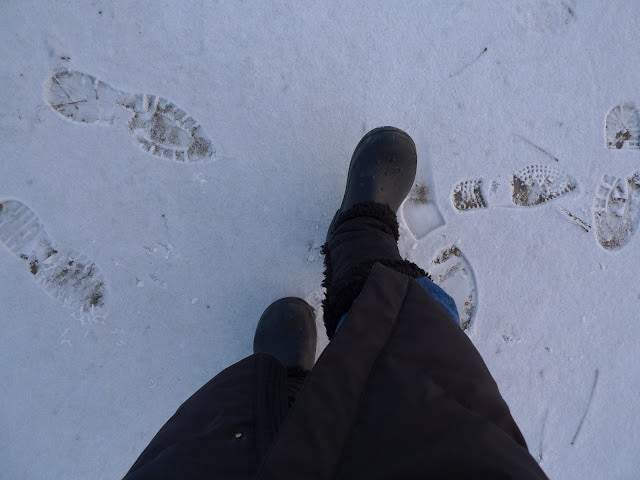 Just like the feathered creatures on the fountain I, too, am learning to live under wintry conditions. With a double pair of warm socks, these Croc boots were made for walking, even on snow.

I'm almost at Angelina's Café to meet my friend - this is a "must visit" for you when you come into this town....as it is known for their thick-hot-chocolate beverage, the Mont Blanc, and their macaroons , and many more sweet creations.

Paris is one of the best places to live or visit, where walking is an enjoyable means of getting around. I'll catch you next time, when I discover more places to tell you about!
Posted by yolanda at 21:52