The Christmas markets are all over Europe during the holiday season. In Rome, I had a chance to go to the one in Piazza Navona. 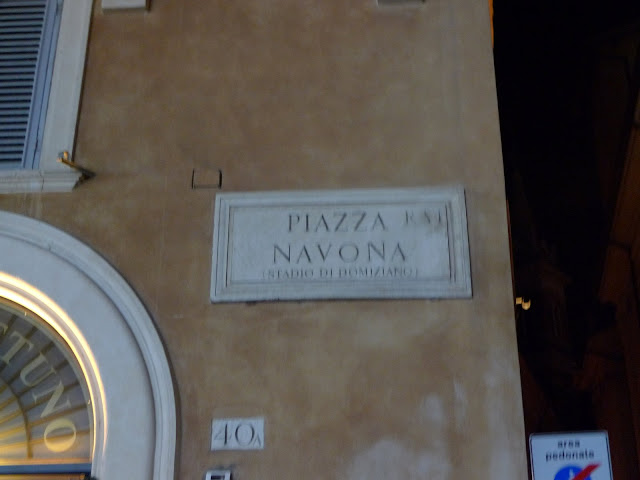 This piazza is long, as the buildings around it are built upon the ruins of the Circus Domitianus (Domitian's Stadium). The piazza used to be the area for the races in the stadium. In ancient times, the stadium was the site of the Agonal games. The name has changed from "in agone" to "n'agone" to "navone" and now "navona".


Today, it is surrounded by beautiful old buildings, a church, and adorned with three fountains. 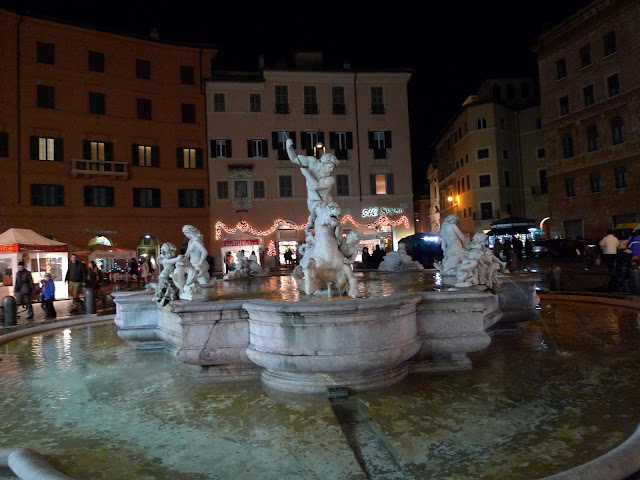 At the northern part of the piazza is the "Fontana di Nettuno" (Poseidon Neptune - god of water in Greek mythology). The basin design was by Giacomo della Porta (1576) and the statues of Neptune and the Nereids (sea nymphs) were just added in the last century. 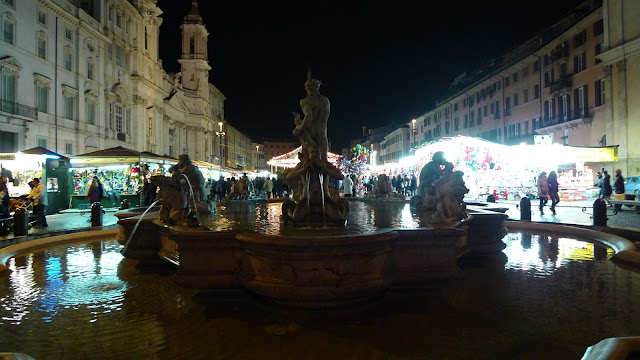 To the western side of the piazza stands the church of Sant'Angese in Agone (St. Agnes in Agony).


The story goes that in this arena a twelve-year-old Christian, Agnes, refused to marry a pagan. On the spot, she was exposed naked, but miraculously covered by the unusual, instant growth of her hair, then martyred.
The building of the church was commissioned by Pope Innocent X in 1652. Not long after, Francesco Borromini took control of the project and was responsible for the completion of the dome,
the concave facade, and the twin bell towers. 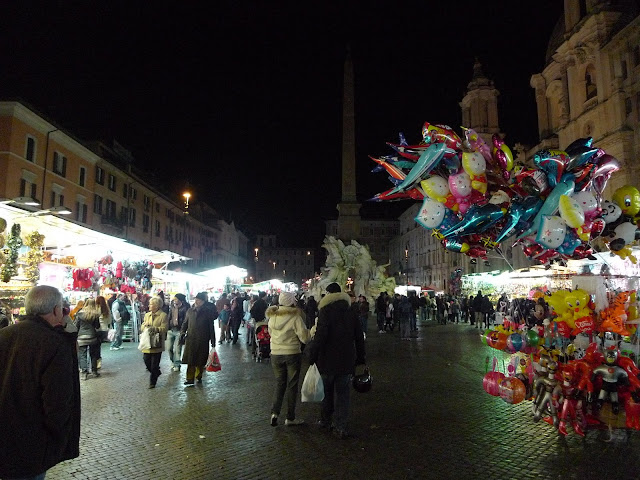 Across from the church, in the center of the piazza is Bernini's most spectacular fountain, "La Fontana Dei Fiumi" (rivers) which was erected in 1651, featuring a central rocky structure
that supports an obelisk, an ancient Roman imitation of the original Egyptian form. 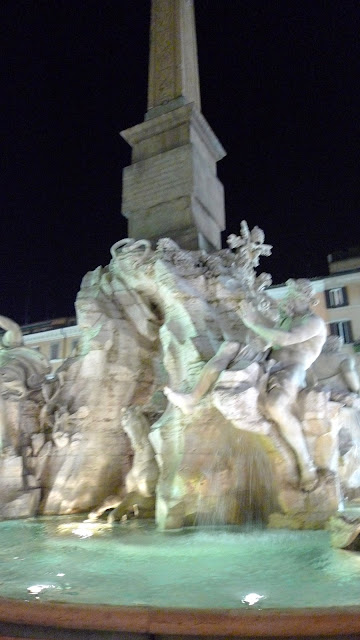 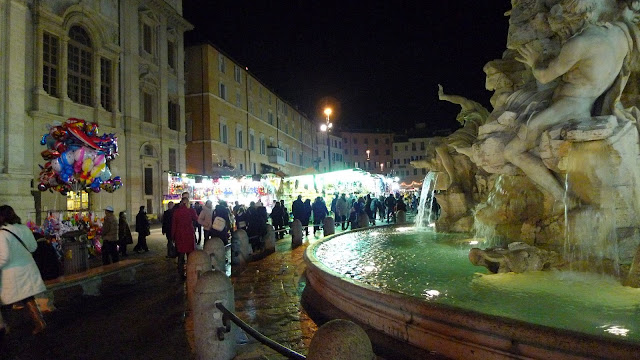 Around the obelisk structure are four giant statues, which were executed by Bernini's pupils according to his designs, representing the Nile, the Danube, the Ganges, and the Rio della Plata,
as a representation of the four corners of the world. 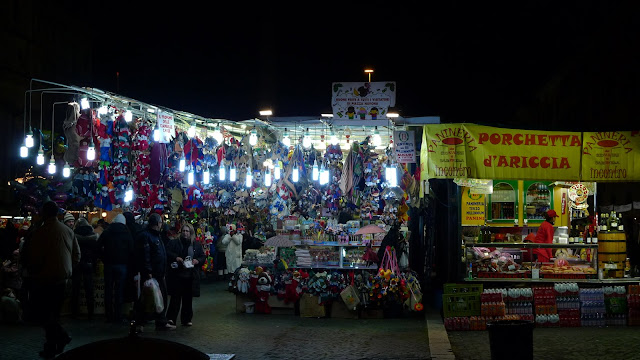 At Christmas time, the piazza is filled with stalls selling toys and other items
for the Christmas gift giving... 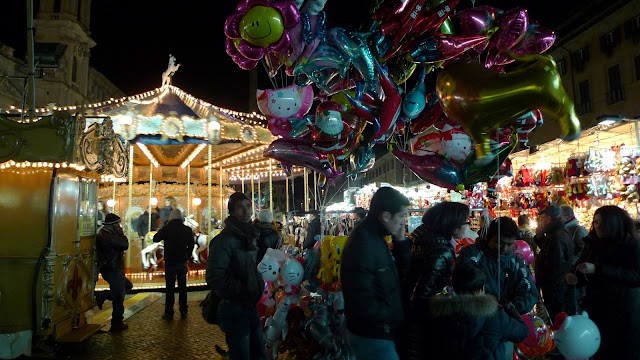 with attractions to make it a family affair, where the children can have a balloon, a sweet treat,
or take a ride and have a fun time... 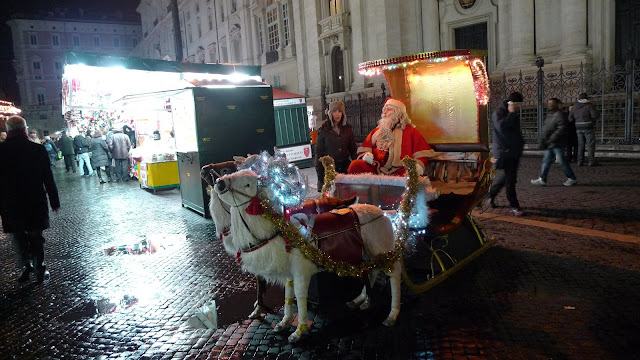 and pose for a picture and talk with Santa about the gifts they want him to bring. 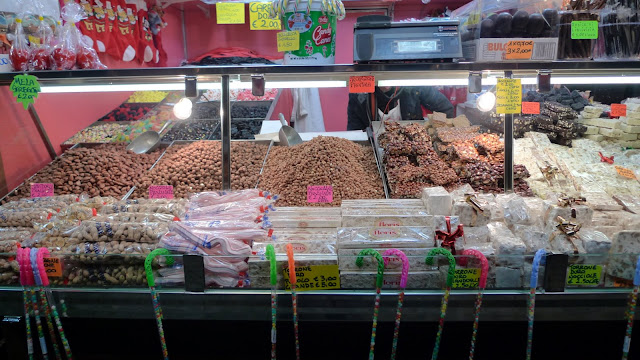 As I walked around, I came upon some Italian delights...an assortment of caramelized nuts and "turrones" (nougats)... 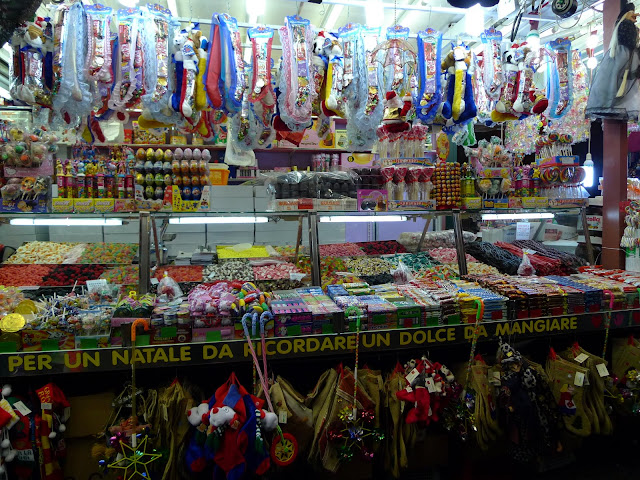 stockings filled with candies and an array of other sweet confections to eat
or for you to use to design your own gifts... 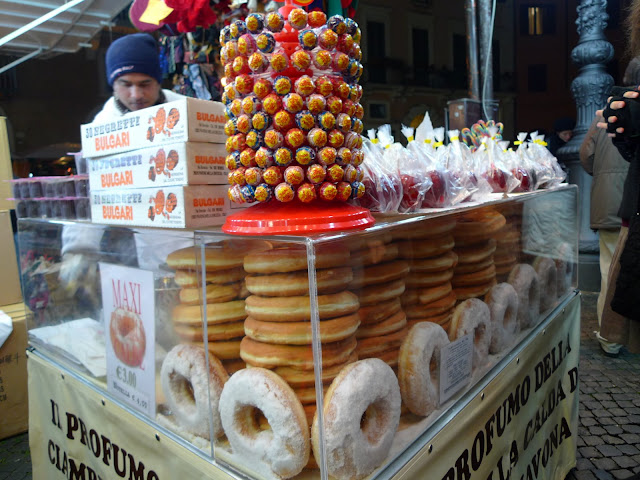 and giant donuts!...that were, likewise, being packaged for gift giving...
plus Chupa Chups and candied apples. 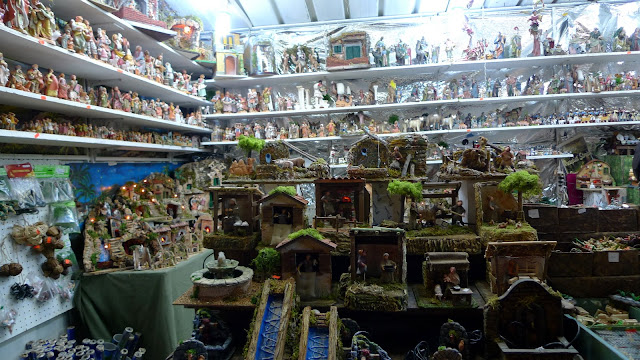 Of all the Christmas markets I have gone to, this one at Piazza Navona seems to be the most dedicated to the season of Christmas. 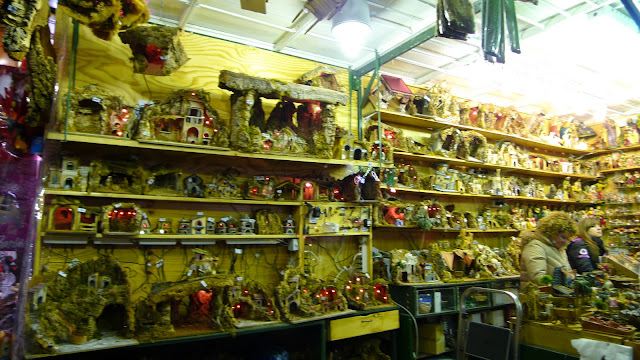 Figurines of all sizes, stables, forms, and cribs are prominently displayed and sold so you can make your own manger scene. 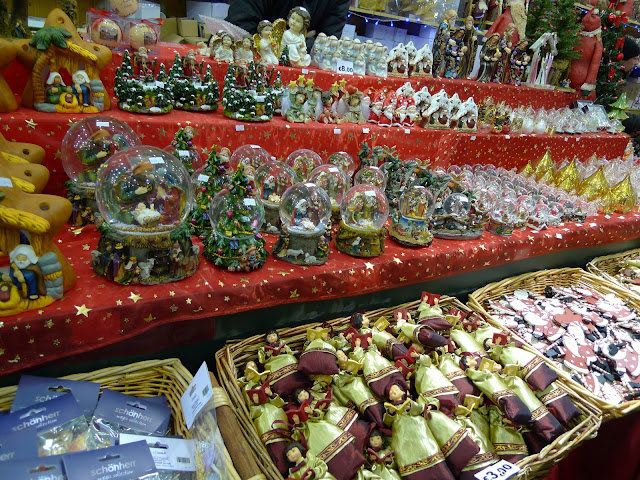 There were ornaments galore...snowballs, candle holders for Kris Kringle presents... 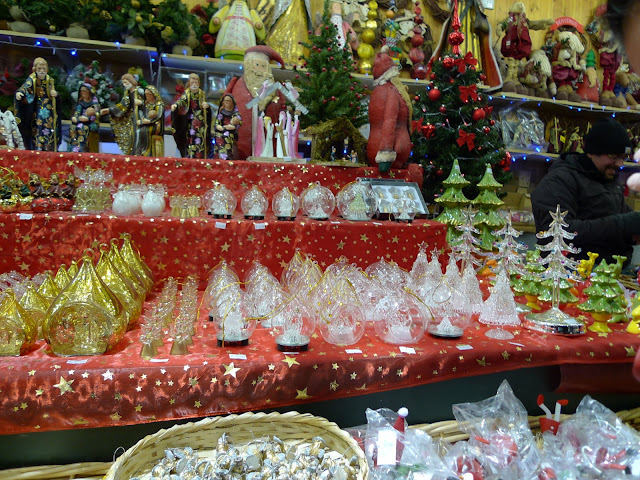 or unique ornaments for an ornament exchange... 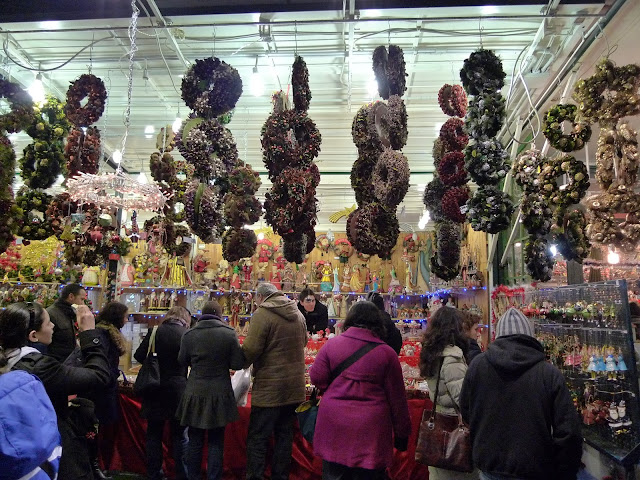 wreaths and other decorations to make the house look festive... 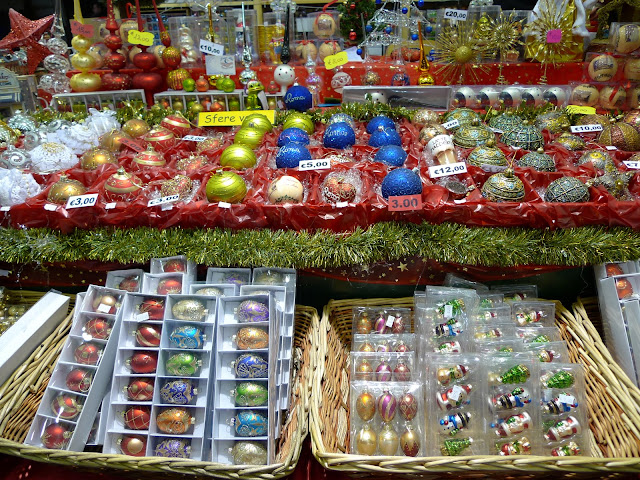 and colorful metallic, wooden, and glass ornaments for trimming the Christmas tree.
After an hour's walk around the market, it was time to go and have dinner.

Piazza Navona is an extremely lively place, with side-walk cafes around it. During the summer, there are numerous artists who offer to draw or paint passers-by, for a fee, of course. The place is crowded each day with a variety of entertainers, including mime artists.

Perhaps, my next visit to Italy should be in the summertime, next year!?!
Posted by yolanda at 16:41