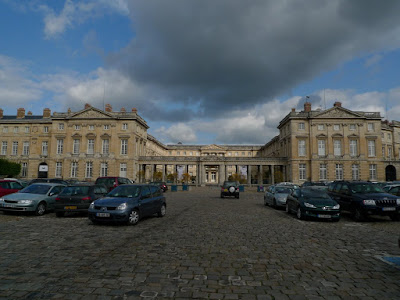 The other day, my daughter and I went on a day trip to Compiegne, a town that is an hour away from Paris by train. We walked about the center of town with a group of ladies, had lunch at a French bistro, and then we visited the Chateau de Compiegne which used to be a a royal palace. I took lots of pictures to share.

By the time we got back to Paris it was 6:00 p.m. We went straight to the Notre Dame to hear mass, in honor of Our Lady of the Pillar (Nuestra Senora del Pilar), then walked over to La Marais as I was craving for Jewish fallafel and Pia wanted French fries with mayonnaise and Harissa sauce.

Among my best memories of New York is eating fallafel at Pax du Monde. It is probably one of the best that I have ever had. Fallafel is a middle Eastern food that is made from chickpeas and spices, formed into a ball and deep fried. Here in Paris, we found a comparable place serving fallafel.

What makes the Jewish Fallafel very inviting is it is served as a complete meal in a pita bread, with a serving of humus at the bottom, and a variety of shredded, pickled vegetables topped with tahini sauce. It is so good! I just found out from Wikipedia that this originated from Egypt , most likely it was formulated by the Copts as a fasting dish. It was adopted by the the early Jewish immigrants to Palestine , along with other Arabic foods, as part of their efforts to re-identify themselves as they resettled and acculturated in another place.

When you come to Paris, I would recommend for you to sample Jewish falafel at L’As du Fallafel on rue de Rosier, in the Jewish Quarter. On the menu poster, you will see that it is endorsed by Leny Kravitz, and it has been written about in travel magazines and books. I am endorsing it, too!